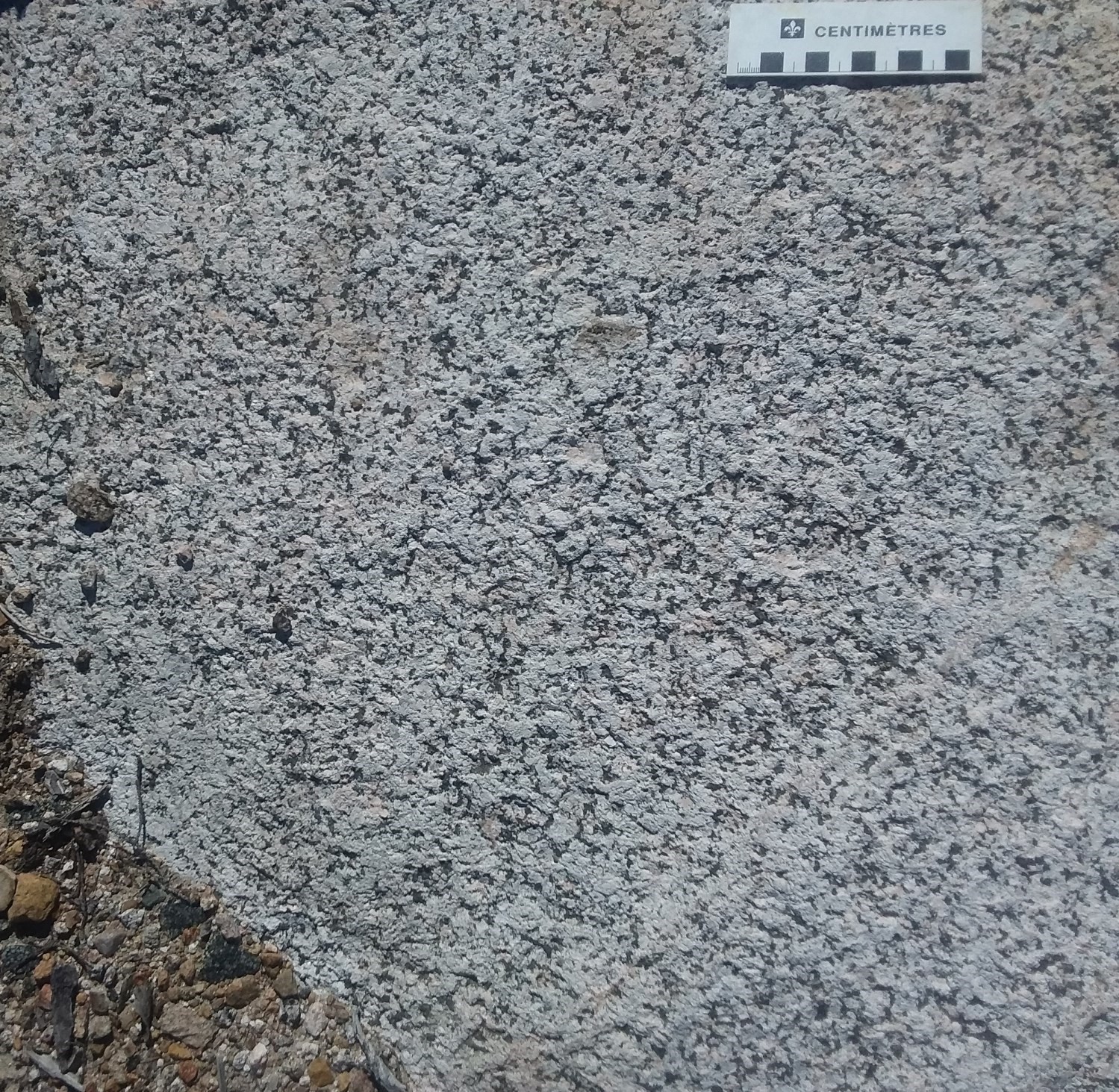 The Lachance Mangerite was introduced by Morfin et al. (2015) during geological survey of the Chambord, Roberval and Notre-Dame-de-la-Doré region (sheets 32A08, 32A09 and 32A10). These authors have grouped several scattered intrusions from the area into this unit. In sheet 32A08, Moukhsil and Daoudene (2019) later restricted this unit to a single intrusion that was well circumscribed by the aeromagnetic survey (Intissar and Benahmed, 2015). The latter shows that the intrusion is characterized by an intense magnetic susceptibility along its edges, whereas it appears low to moderate elsewhere. An isolated intrusion of this mangerite was mapped east of Dolbeau-Mistassini by Moukhsil and El Bourki (2020).

The Lachance Mangerite is a polyphase batholith dominated by mangerite, but syenite and alkaline feldspar granite are also present. The amount of quartz within these rocks varies widely from one outcrop to another (5-30%). 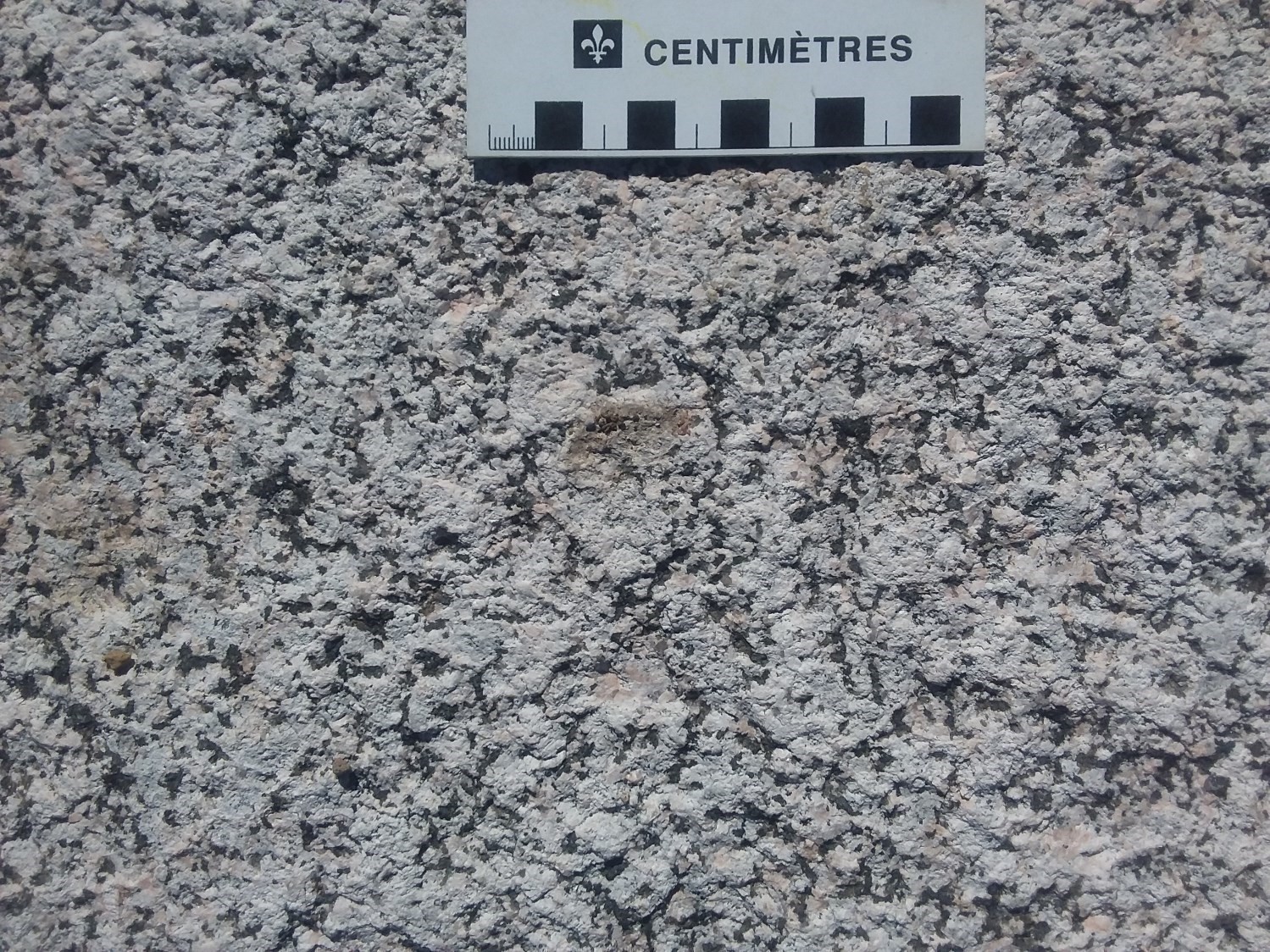 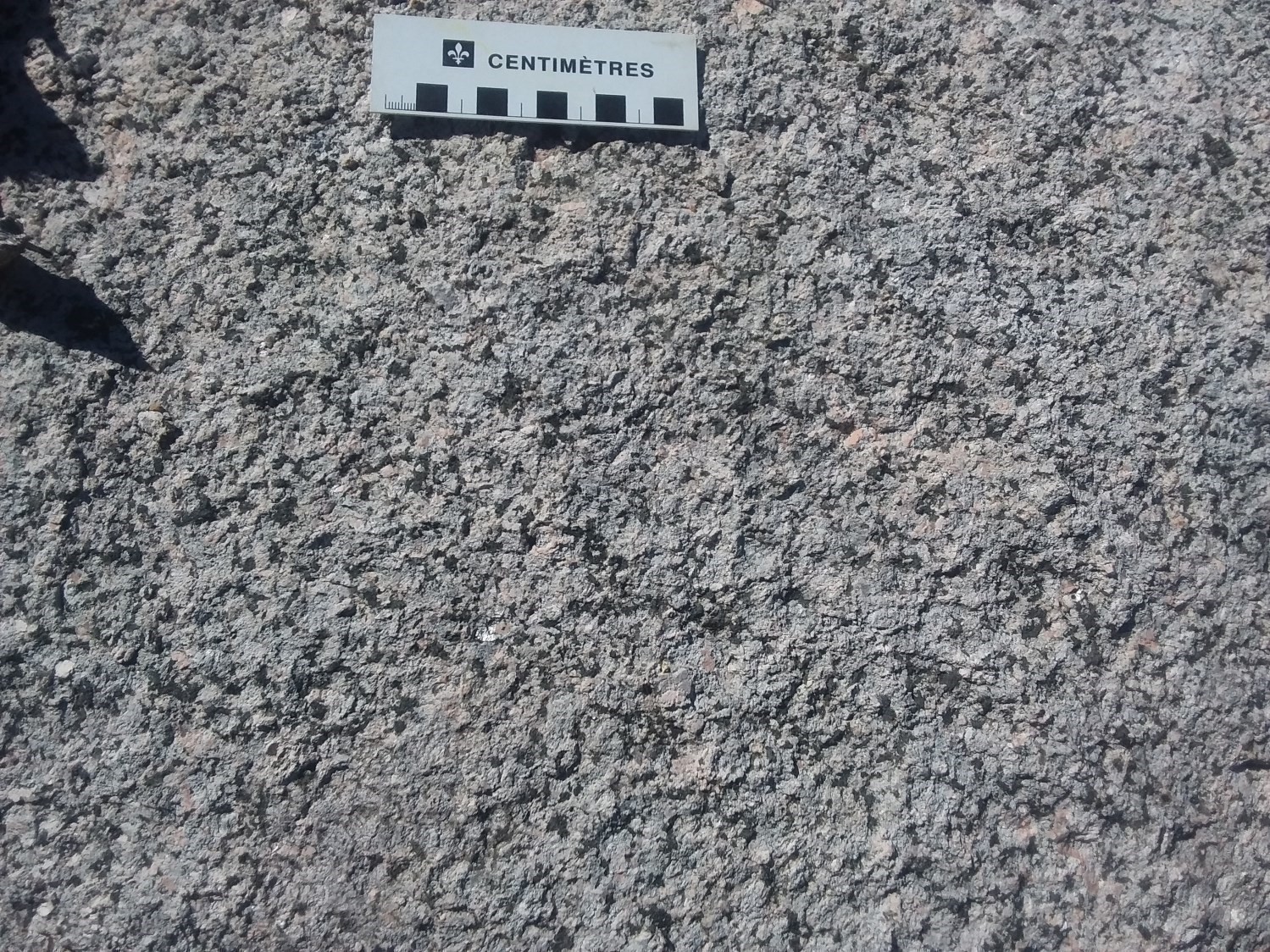 Mangerite is generally whitish in altered surface and green in fresh exposure. It is characterized by a porphyraceous texture with K-feldspar and plagioclase phenocrystals in a medium to coarse-grained matrix consisting of quartz, amphibole, biotite, orthopyroxene and magnetite. The proportion of feldspar phenocrystals ranges from 20% to 30% of the rock and their length is generally between 1 and 4 cm. Phenocrystals consist mostly of perthitic K-feldspar. Orthopyroxene is observed in ferromagnesian mineral clusters and is partially replaced by biotite and amphibole. Quartz content is variable, but generally relatively low. Quartz forms large zones having undulatory extinction. Magnetite is almost systematically present in mangerite, but its content is highly variable. Mangerite also contains euhedral crystals of magmatic epidote associated with accessory minerals such as apatite and zircon.

The mangerite texture is marked by mild to moderate foliation. At the border of the intrusion, this foliation is generally better developed and the rock is finer grained and phenocrystals display stronger alignement. The apparent increase in strain intensity towards the edge of the intrusion coincides with an increase in magnetic susceptibility. 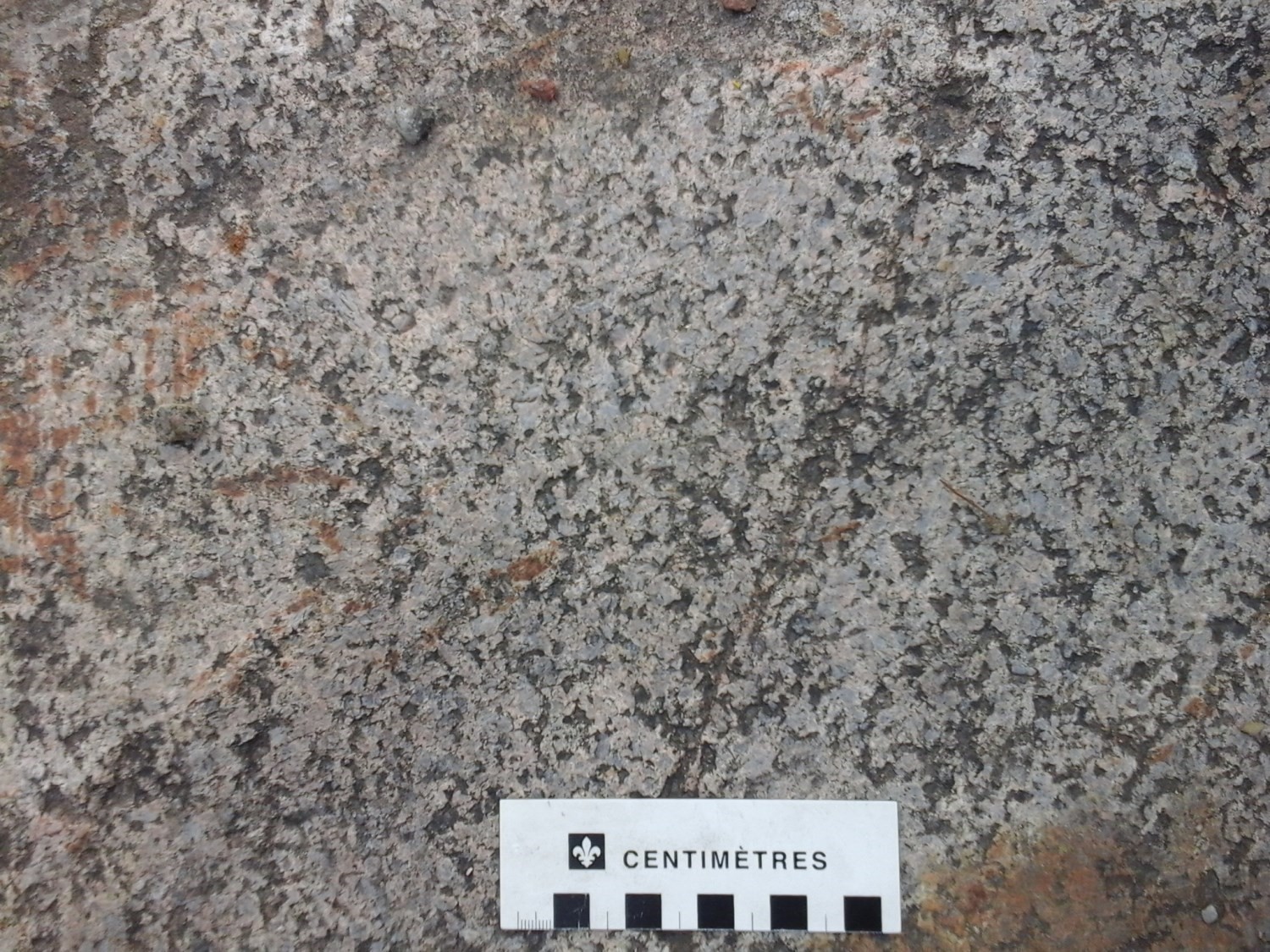 Syenite is whitish in altered surface and pinkish in fresh exposure. It is mainly k-feldspar porphyraceous and massive. It shows the same mineralogy as mangerite, but with different proportions of the various mineral phases. Plagioclase is altered to white mica and K-feldspar is generally perthitic. When present, orthopyroxene appears uralitized. It shows a rim consisting of green hornblende, locally chloritized. These ferromagnesian minerals and biotite form millimetric grain clusters. Syenite locally contains quartz which forms large zones of undulatory extinction associated with myrmekite grains. Accessory mineral phases are magmatic epidote, opaque minerals (including magnetite), apatite and zircon. 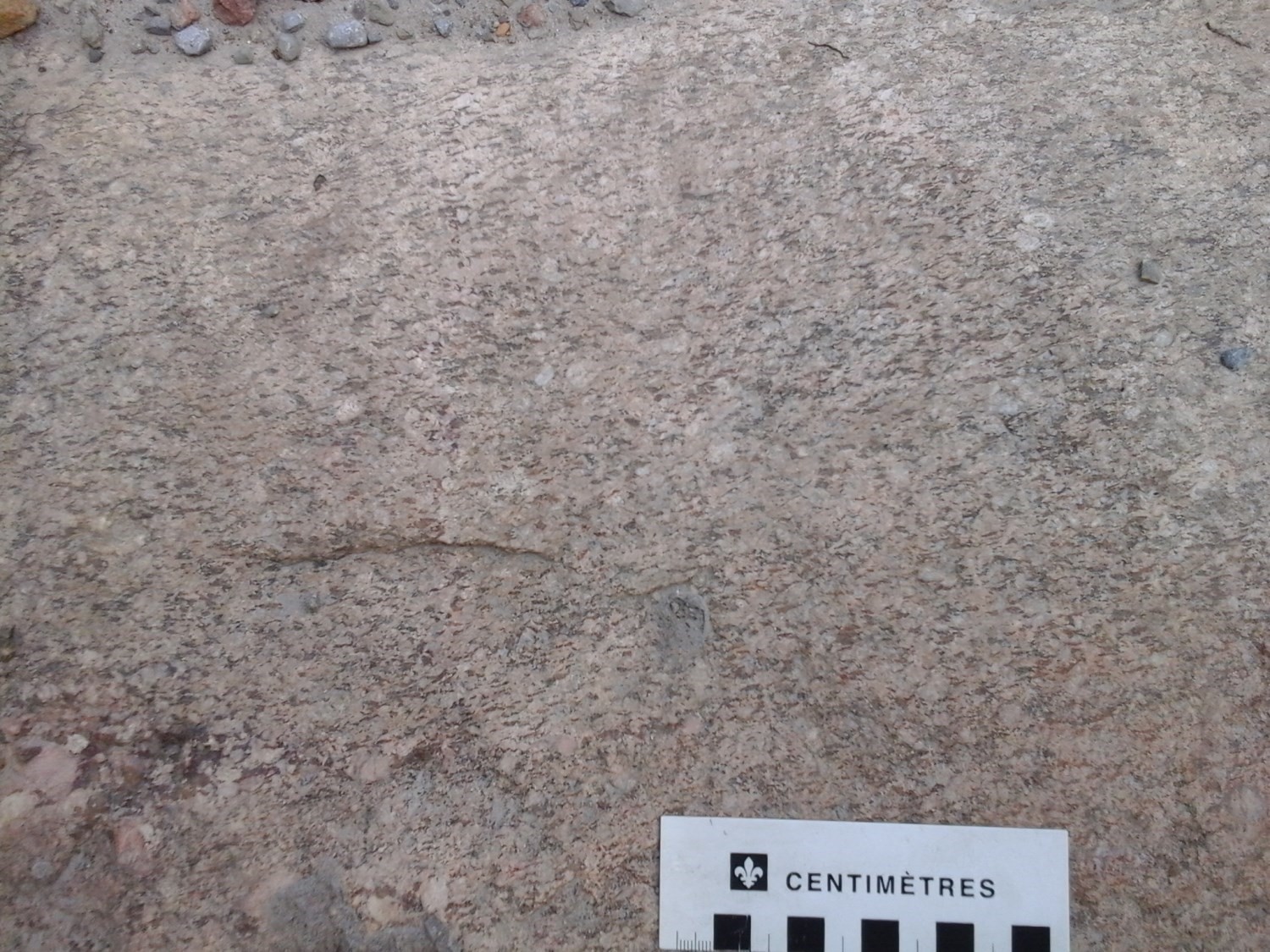 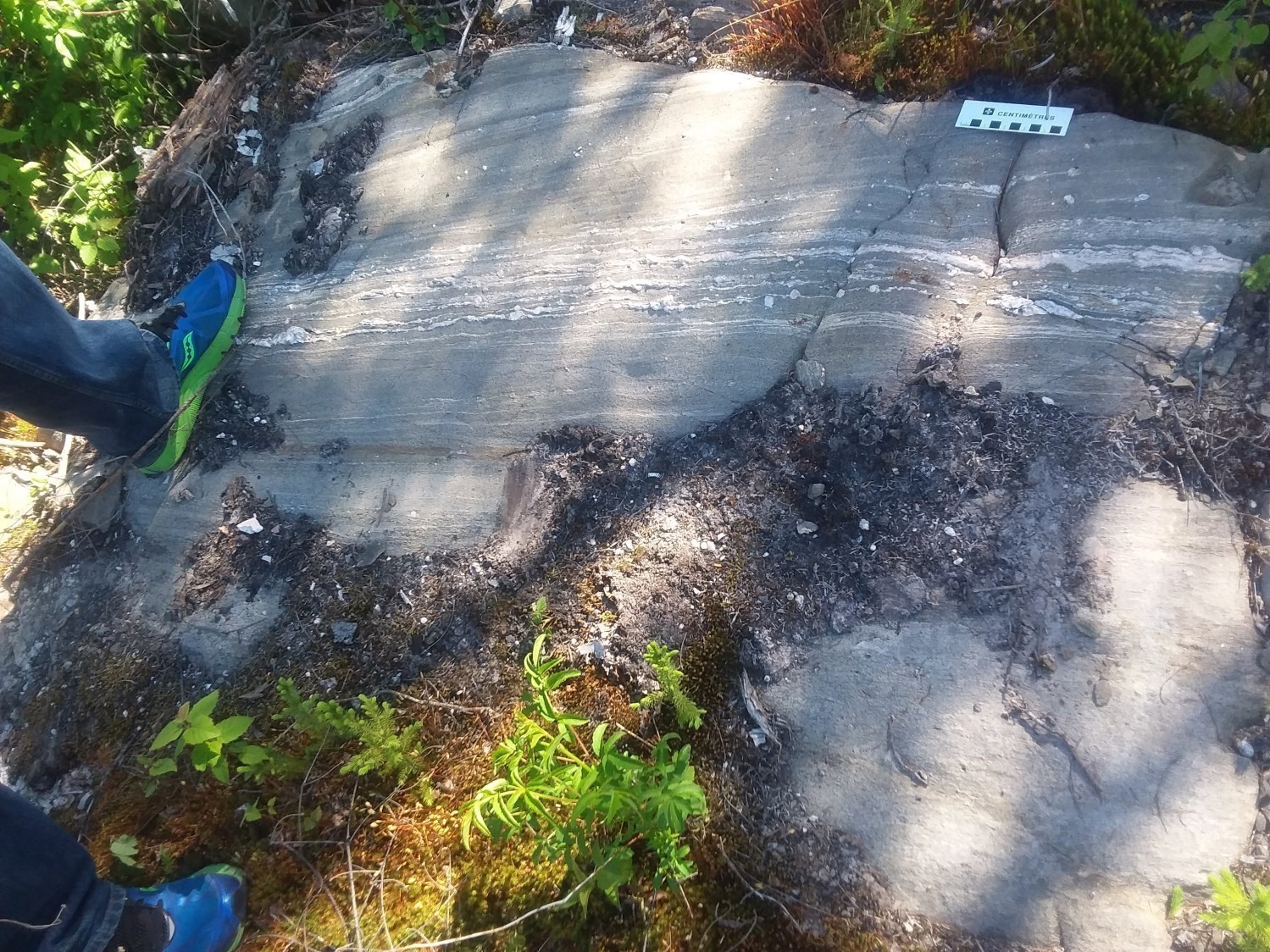 The Lachance Mangerite is in fault contact with the Travers Suite and Patrick Ouest charnockite (intermediate to felsic phase of the Lac Saint-Jean Anorthositic Suite), and intrudes into the Belley Plutonic Suite. Highly deformed metavolcanic rock enclaves are observed in the Lachance Mangerite. These amphibolitized enclaves are centimetric to metric in size, greenish in fresh and altered surfaces and fine grained. They could correspond to known volcanic rocks of the Montauban Group.