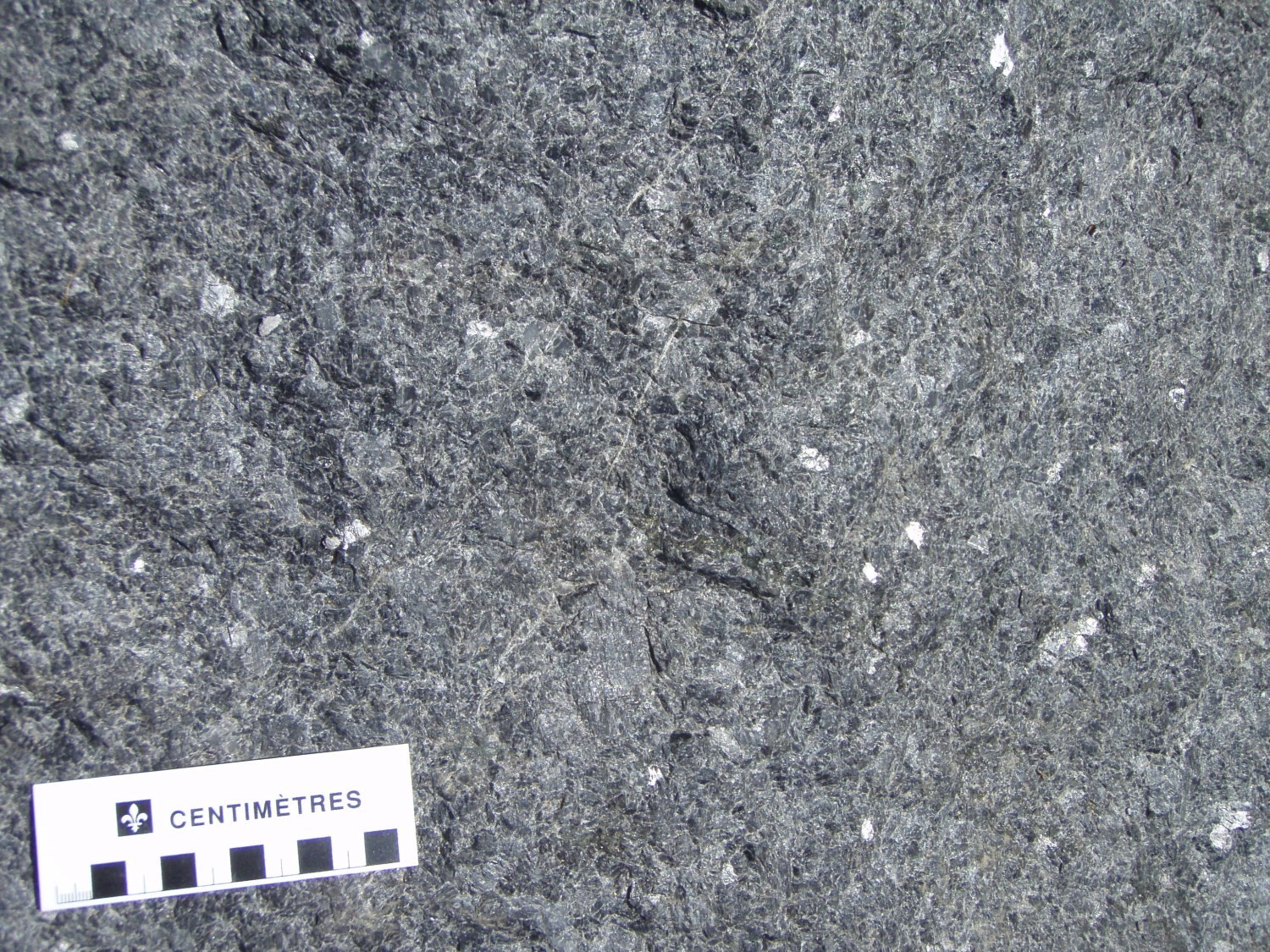 Descriptions of this intrusion’s lithologies are taken from the geological synthesis of sheet 22E by Hébert et al. (2009). These authors grouped the different lithologies of this suite into two main facies: a) a mafic to ultramafic facies, and b) an intermediate to felsic facies. Field observations show that several characteristics such as lithology type, primary structures, magnetite, ilmenite and apatite contents, as well as deformation are not distributed homogeneously in the LSJAS.

Unit mPlsj1 consists mainly of gabbronorite which may contain thin horizons of coronitic leuconorite. Gabbronorite is a lithology commonly associated with anorthositic masses. Indeed, the presence of gabbronoritic fringes bordering anorthositic masses is not uncommon. Hébert and Cadieux (2003) and Hébert and Lacoste (1998) described gabbronorite horizons at the edge of the Mattawa Anorthosite, while Gobeil et al. (2002) observed these rocks on the periphery of De La Blache Mafic Plutonic Suite (NE corner of sheet 22E). Gabbronorite is brownish to greenish or black in altered surface and brownish grey or black in fresh exposure. In addition, the rock unit is homogeneous, medium grained and contains <50% coronitic orthopyroxene. Large pyroxene crystals often form strings stretched parallel to the foliation. A few Fe-Ti-P oxide gabbronorite horizons are observed in this unit. 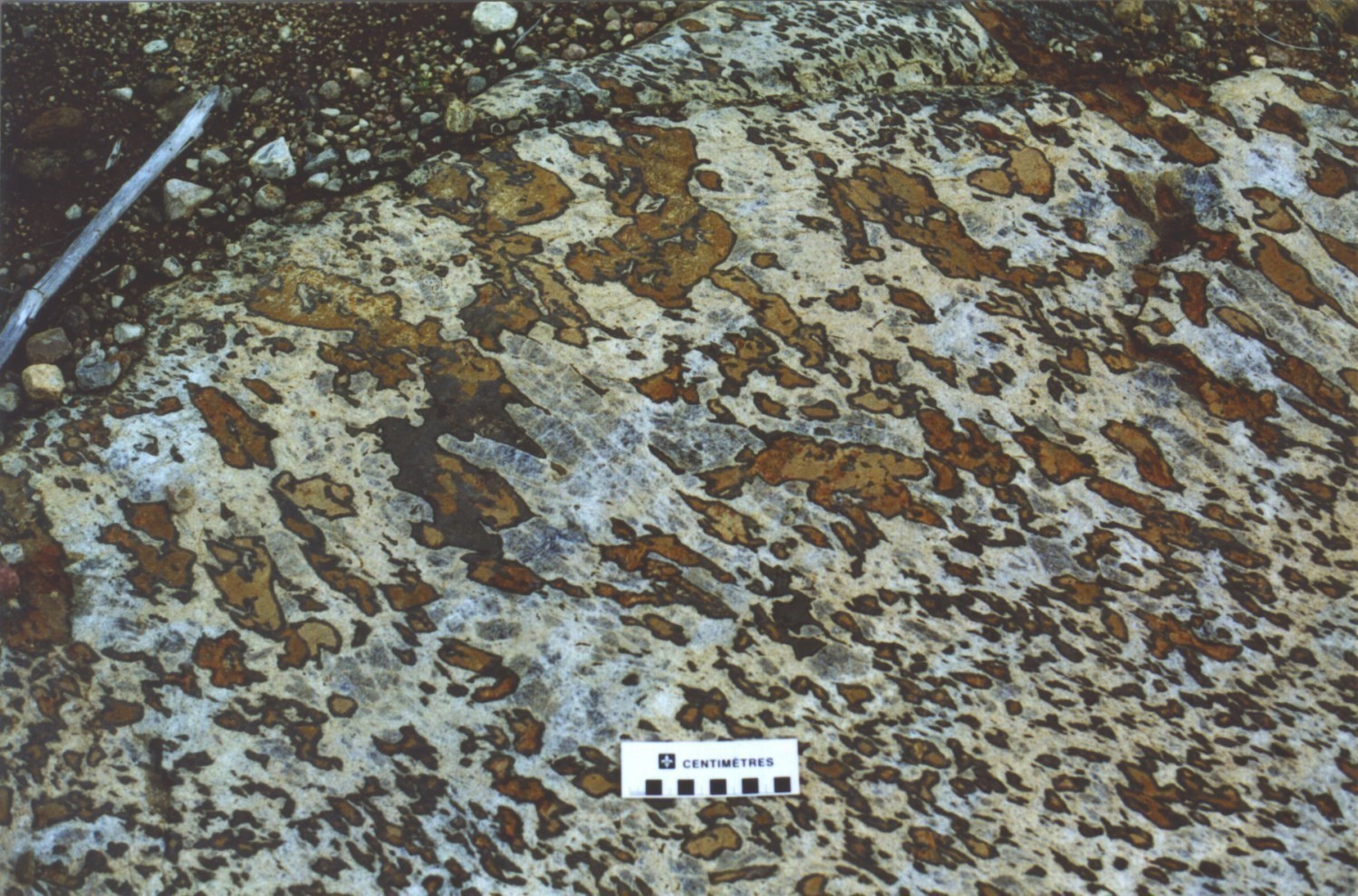 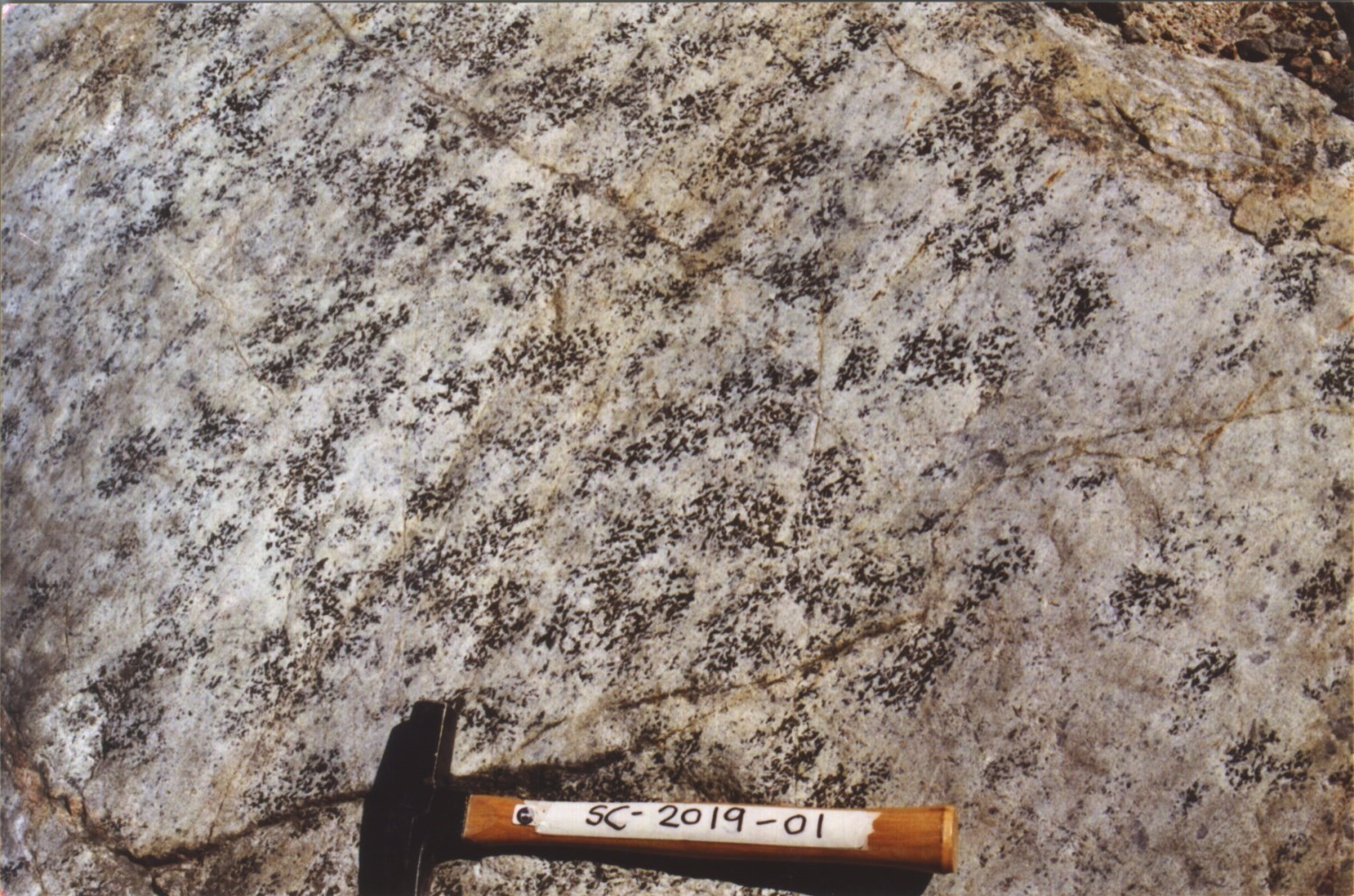 Unit mPlsj2 is the largest unit of the LSJAS. It consists of anorthosite and leuconorite with purple, light-grey or bluish labradorite type plagioclase (Hébert et al., 2009). There are also scarce horizons of norite, gabbro, gabbronorite and pyroxenite. Anorthosite is the most common rock and is composed of >90% plagioclase (labradorite type) of centimetric to decimetric grain size, and>10% orthopyroxene (generally coronitic). Leuconorite is composed of coronitic orthopyroxene (10-35%), hornblende and biotite. 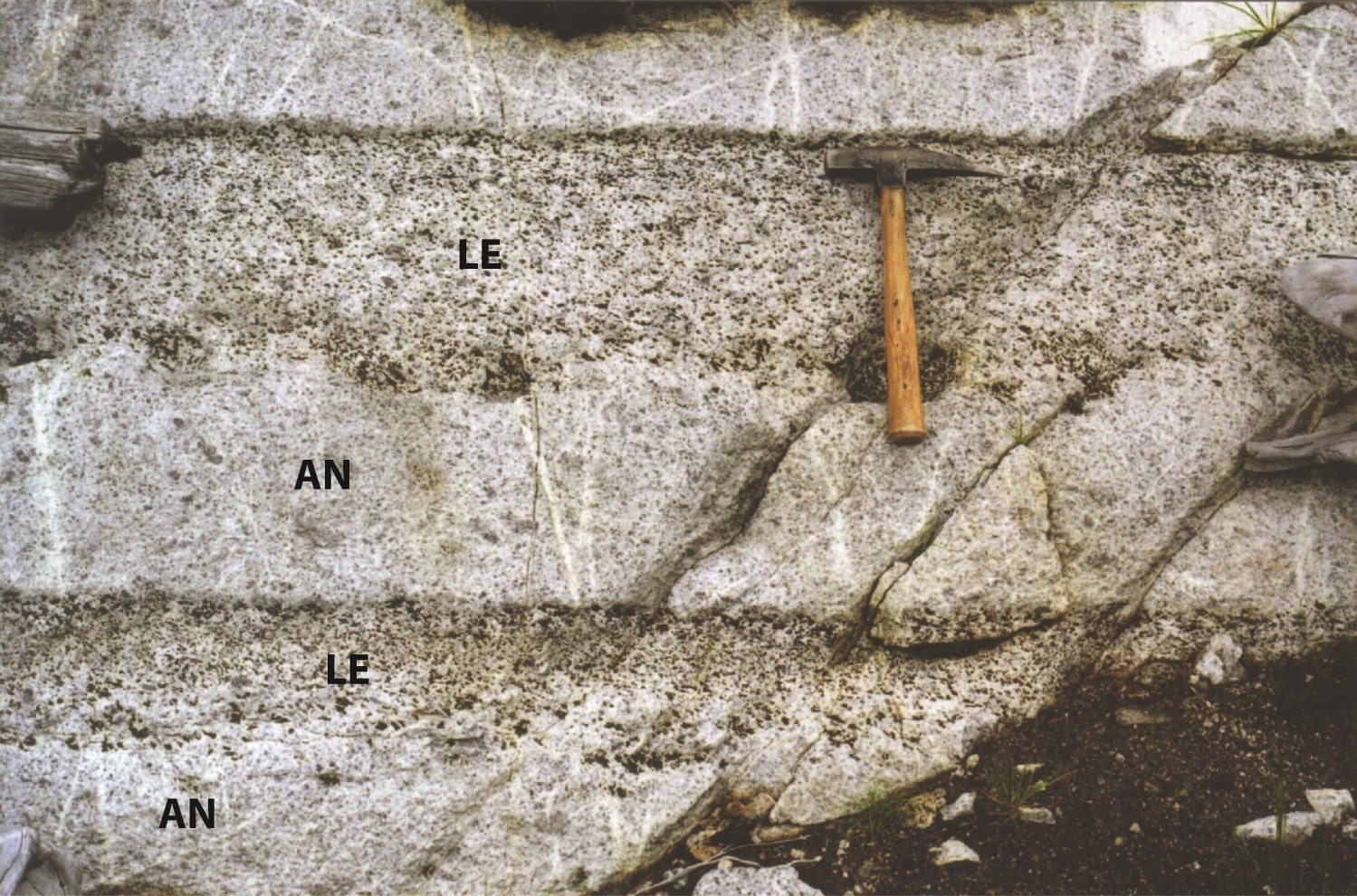 Subunit mPlsj2a consists mainly of anorthosite enriched in Fe-Ti. However, it is characterized by the presence of thin horizons of pyroxenite and ilmenite magnetitite, as well as low apatite content. Chalcopyrite, pyrite and pyrrhotite mineralizations are present (Hébert and Beaumier, 2000).

The unit mPlsj2b consists of anorthosite and leuconorite containing bluish plagioclase, locally greyish. It is distinguished by a plagioclase porphyroclastic texture and weak plagioclase recrystallization. In addition to pyroxenite and ilmenite magnetitite, Hébert and Beaumier (2000) identified peridotite, olivine gabbro and some dunite horizons in this subunit, as well as high apatite content (2-20%). 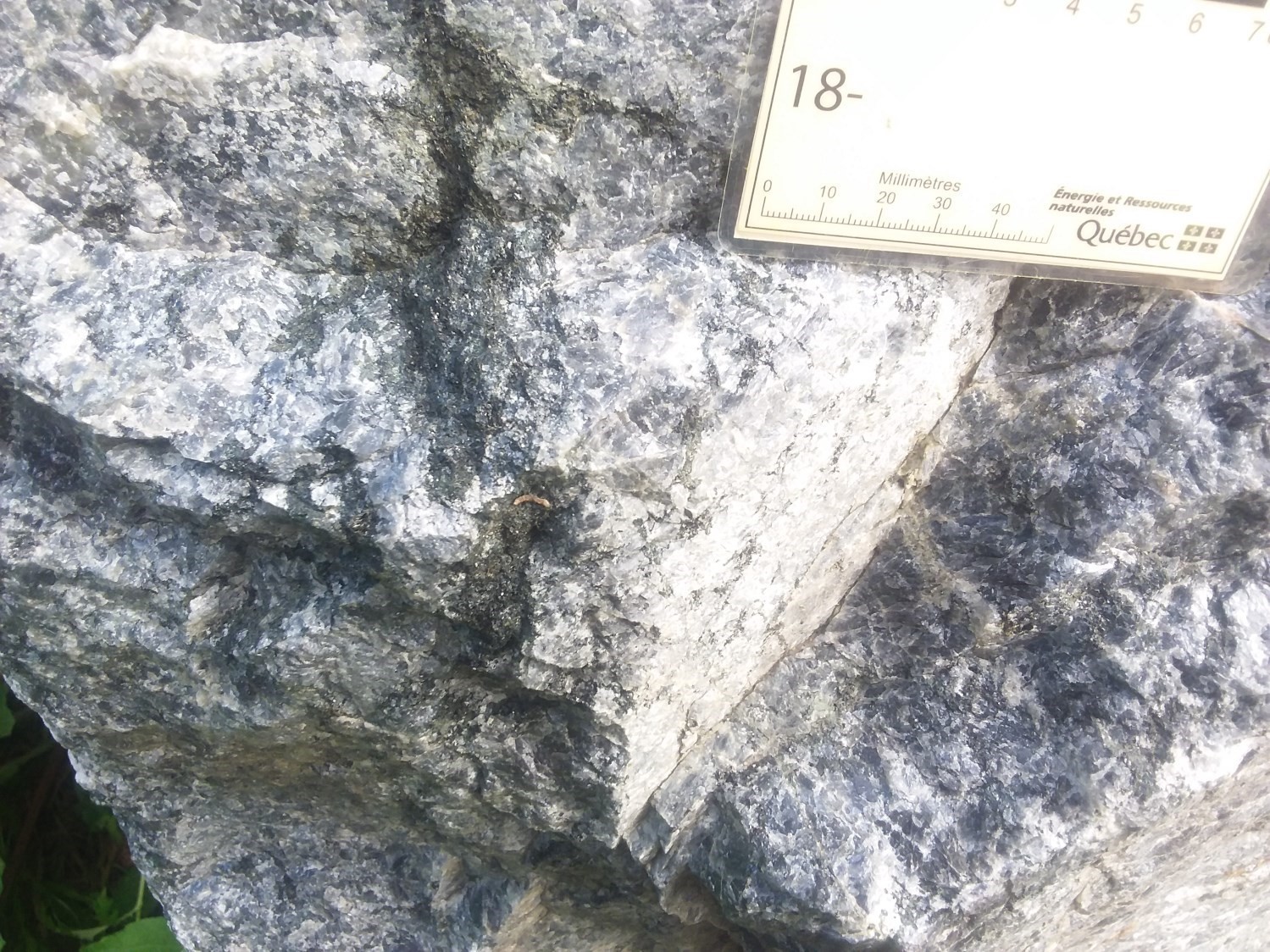 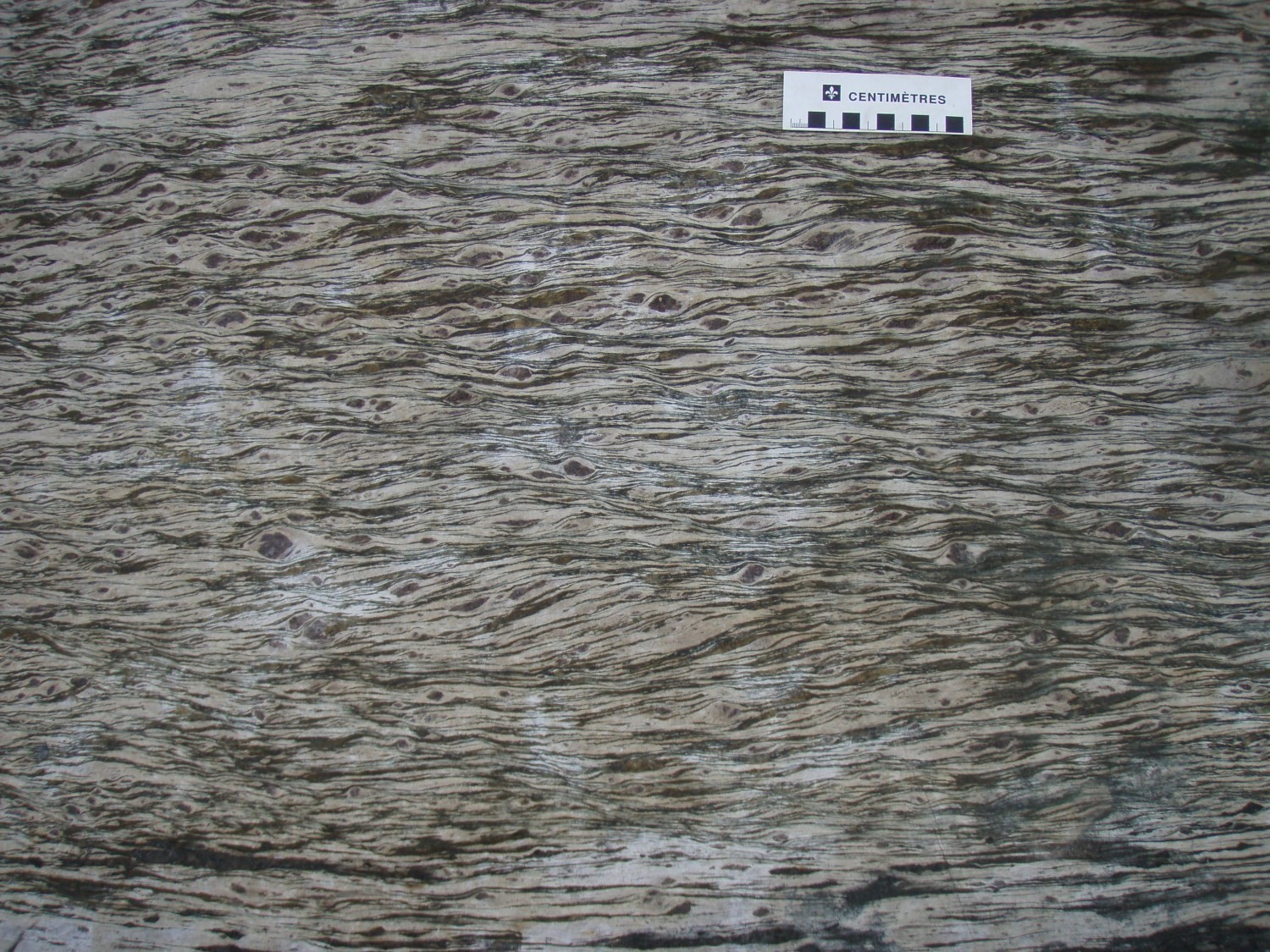 Laurin and Sharma (1975) defined this unit as a package of gabbroic anorthosite and anorthositic gabbro. These former names were replaced by “leuconorite” and “leucogabbronorite”, respectively. According to Hébert et al. (2009), unit mPlsj3 differs from unit mPlsj2 by its much higher proportion of leuconorite (70%) compared to anorthosite (30%). These authors revealed that these rocks are locally composed of andesine-type plagioclase. Andesine facies are primarily found in the north-central part of sheet 22E and are often enriched in titanomagnetite, ilmenite and apatite (Cimon and Hébert, 1998; Hébert, 2001; Hébert et al., 2005). This unit contains very thin horizons of olive leuconorite in leuconorite and norite. Olivine is always separated from plagioclase by successive rims of pyroxenes, hornblende and garnet (coronite).

Typically, ultramafic lithologies are encountered in unit mPlsj3, along with horizons of magnetitite and nelsonite. Hébert et al. (2009) specifically mention the presence of clinopyroxenite in the northeastern part of Pamouscachiou Lake (sheet 22E10) and orthopyroxenite in the Paul Lake area (sheet 22E15), where apatite mineralization is more associated with nelsonites and anorthositic gabbros. Peridotite and dunite horizons have been observed in Virginia Gold Mines drilling in the Paul Lake area (Francoeur, 1998, 1998; Archer et al., 1998). Peridotite and dunite typically contain Fe-Ti oxides and apatite. Magnetittie occurs as massive horizons or breccias consisting of titanomagnetite, ilmenite and apatite. In massive horizons, these minerals are medium to fine grained. In contrast, they are often coarse grained in breccias﻿ and form a mesostase that coats fragments of anorthosite, leuconorite and norite, as well as crystals or fragments of plagioclase and pyroxene. Nelsonite is composed mainly of ilmenite and apatite and some magnetite. Ilmenite is grey-black to black, while apatite can be white, yellowish or greenish. Nelsonite horizons are primarily located in the Paul Lake area where Soquem has intersected several horizons by drilling (Roy, 2001).

Unit mPlsj4 is primarily found in the SW portion of sheet 22E. It consists mainly of leuconorite (anorthositic gabbro), accompanied by minor amounts of norite, diorite and locally anorthosite enclaves.

Unit mPlsj5 is located in the northwest portion of sheet 22E and forms a small mass of black to dark-grey, massive and highly magnetic olivine gabbro and gabbro. Gabbro contains up to 35% olivine and smaller amounts of orthopyroxene and amphibole either ferromagnesian (grunerite-type cummingtonite) or sodic and ferriferous (katophorite). Thin horizons of dunite and peridotite with Fe-Ti oxides and apatite are also observed in this unit.

Unit mPlsj6, also known informally as Steve gabbro, forms a large mass NW of the Pipmuacan Reservoir (Hébert et al., 2009). This gabbro is a late facies of the LSJAS. It is massive, medium grained, pepper-and-salt-coloured and mainly composed of clinopyroxene (augite to ferro-augite) and lesser amounts of orthopyroxene, generally microcoronitic. Locally, enclaves of anorthosite, leuconorite, gabbro, pyroxenite and oxide-enriched rocks are observed.

Unit mPlsj8 consists of a brecciated gabbro with calcosilicate rock and marble enclaves (Gervais, 1993). These enclaves are up to 10 m long and originate from units of the Saint-Onge Supracrustal Sequence (paragneiss, marble, calcosilicate rock, quartzite), which outcrops nearby.

This unit of locally bluish-quartz granophyre was named Du Bras Pluton by Beisswenger (1992). Granophyre is believed to be the result of partial melting of the host paragneiss during the emplacement of anorthositic rocks of the LSJAS. Ider (1997) and Higgins et al. (2002) obtained an age of 1148 ±6 Ma for the granophyre, confirming its belonging to the LSJAS. These authors renamed this unit the Du Bras Granite. 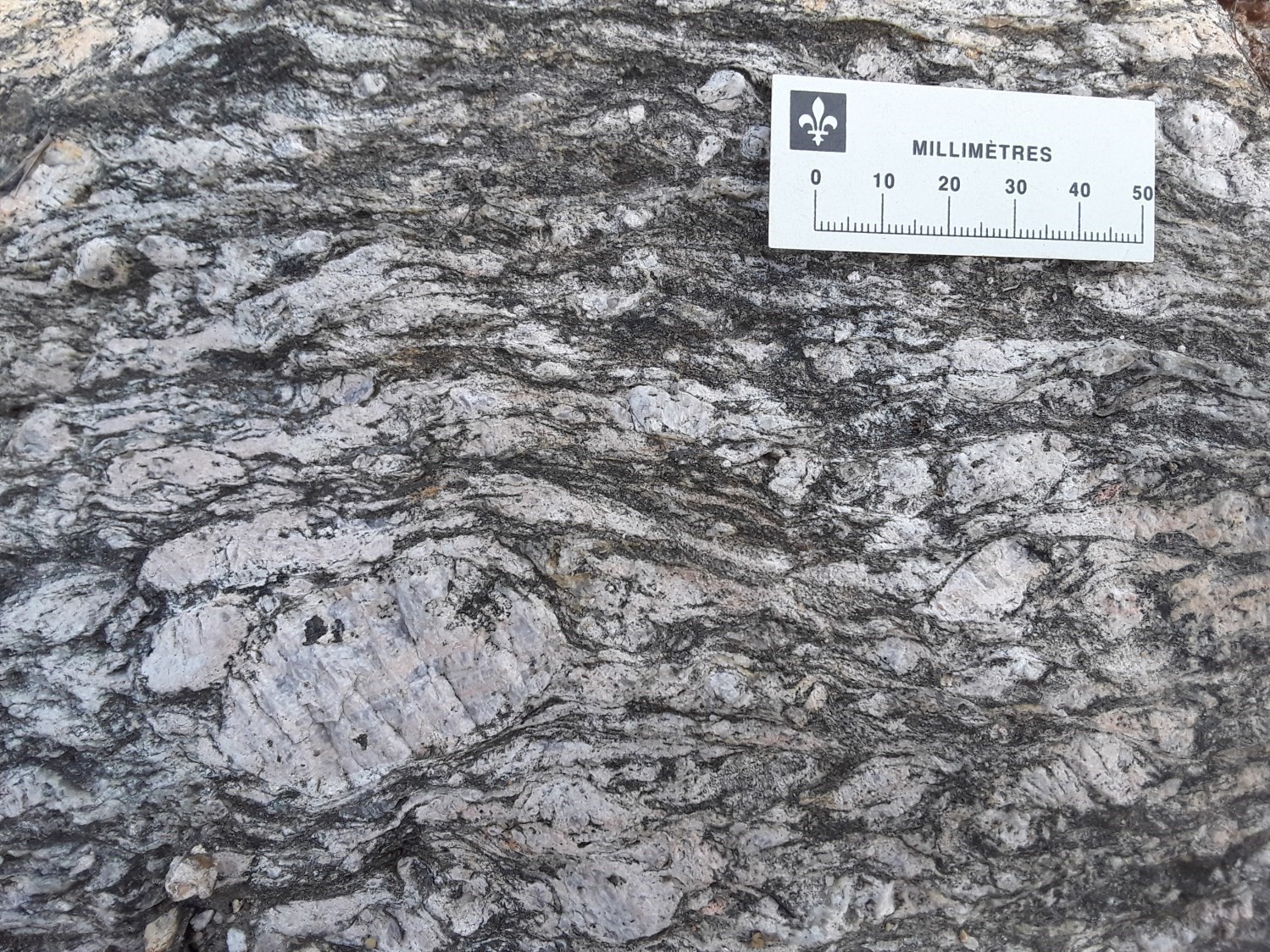 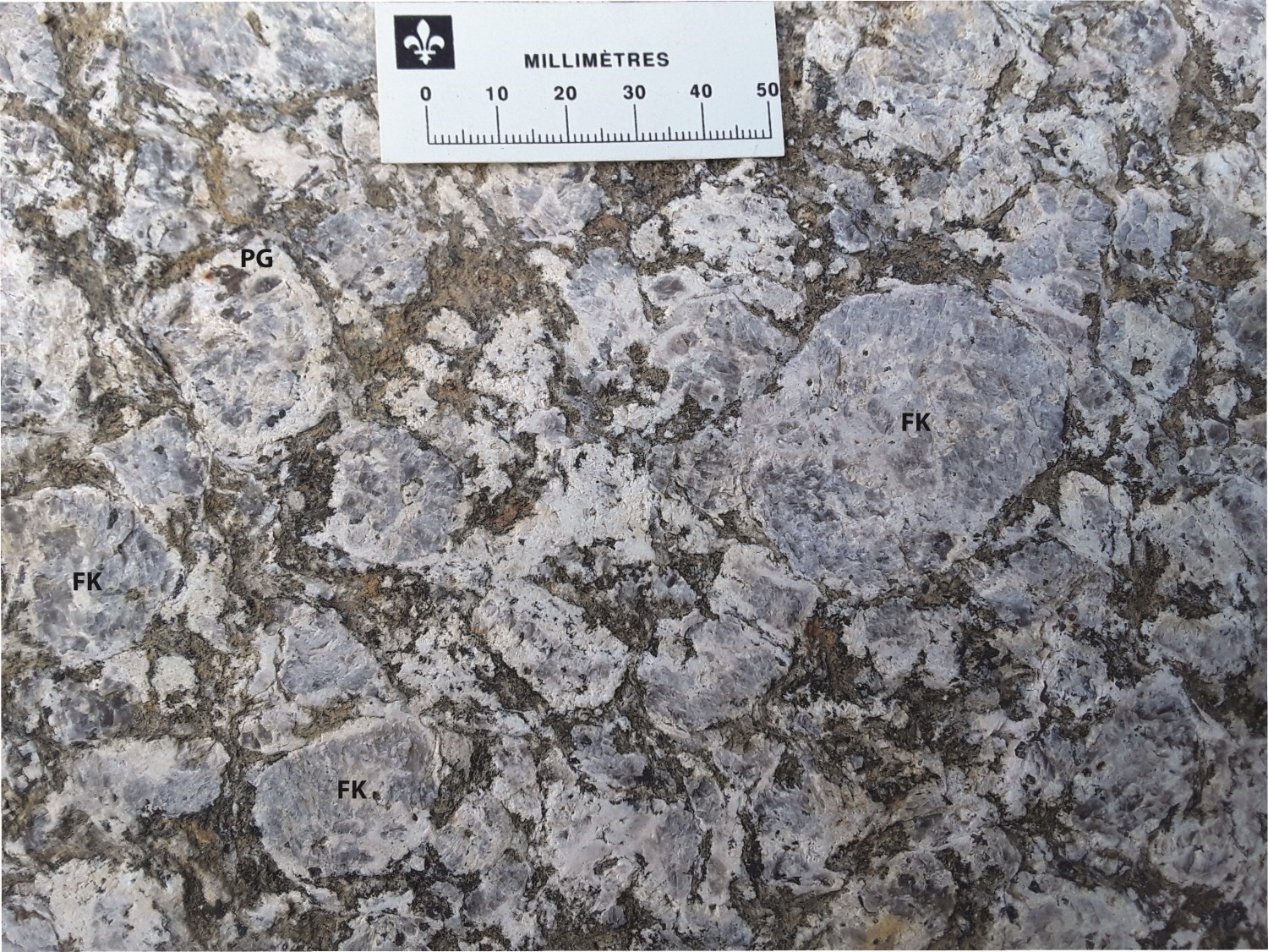 This intrusion was described by Gervais (1993) and was dated by van Breemen (2009) to 1143 ±2 Ma. It consists of charnockite and mangerite. Charnockite is slightly pinkish beige in fresh and altered surfaces. It contains K-feldspar phenocrystals that are found in a low-abundance matrix of quartz, feldspar and biotite, so that these minerals appear stacked on top of each other. Charnockite is coarse grained, porphyraceous and shows a rapakivi texture. Mangerite outcrops in the southern portion of the intrusion. It is greenish in fresh exposure and porphyraceous. Unlike charnockite, feldspar phenocrystals are incorporated in an abundant matrix (>50%).

Moukhsil and El Bourki (2020) mapped alkali feldspar granites (NE portion of sheet 32A16) that make up the SW envelope of the Lac-Saint-Jean Anorthositic Suite. Alkali feldspar granite is greyish in altered surface and pinkish in fresh exposure. It is K-feldspar porphyraceous (1-5 cm), perthitic and locally with a rapakivi texture. It is also composed of large zones of quartz, plagioclase, orthopyroxene, green hornblende, clinopyroxene and biotite. In places, orthopyroxene is uralitized and associated with some clinopyroxene crystals, all encompassed by perthitic K-feldspar phenocrystals. Accessory minerals are zircon, magnetite and titanite.

The Lac-Saint-Jean Anorthositic Suite covers an area of 20 000 km2, making it one of the most important intrusions in the Grenville Province.

Dating of several samples belonging to the LSJAS was estimated to be between 1160 Ma and 1135 Ma. Dating of an alkali feldspar granite sample from the Patrick Ouest Charnockite (outcrop 19-AM-92) collected during the work of Moukhsil and El Bourki (2020) delivered a preliminary age of 1169.12 Ma, therefore older than previously obtained. This suggests that the Patrick Ouest Charnockite is the host of LSJAS mafic to ultramafic facies. Although preliminary, this age could mean that the LSJAS would have been emplaced in the range of 1169 Ma to 1135 Ma and coincided with the Adirondian event (1180-1080 Ma) of Gower and Krogh (2002).

Intrusion of the Lac-Saint-Jean Anorthositic Suite involves multiple rises of mafic to ultramafic magmas. These magmatic impulses have subsequently been involved in large Grenvillian overthrusts (Hébert et al., 2009; Turcotte, 2001). The architecture of the LSJAS is a result of several major fault zones that helped cut the suite into many juxtaposed slices.