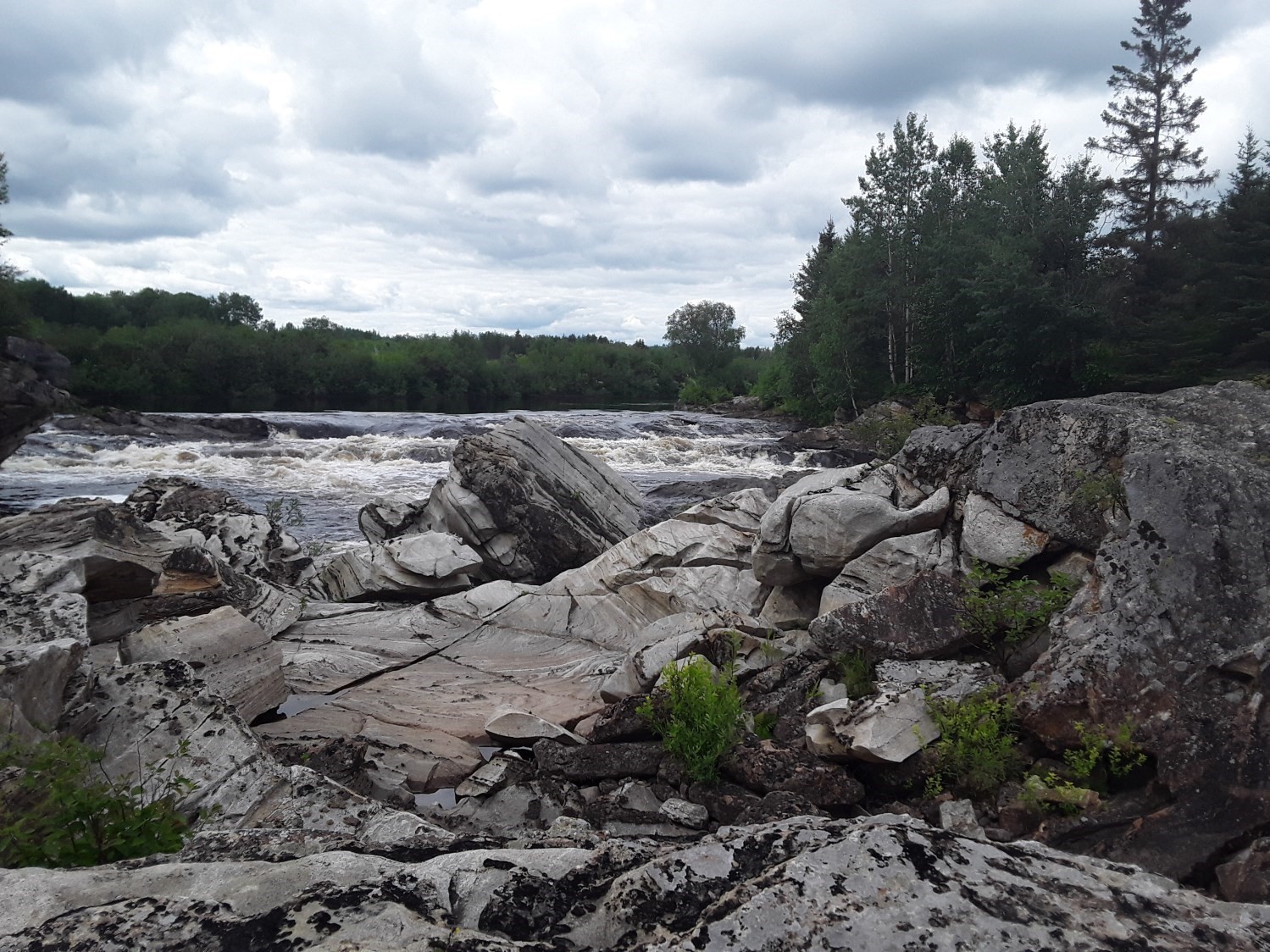 Hébert (1989) discovered wollastonite mineralized zones in the Grandes Pointes Lake area in the Lake Saint-Jean region (sheet 22E04). Following this discovery, the Ministère scheduled mapping projects in this area. SW of sheet 22E04, Gervais (1993) conducted mapping at scale 1:50 000 and identified, among other things, five klippes of metasedimentary rock that he associated with the Grenville Supergroup (Wynne-Edwards, 1972). During geological compilation of sheet 22E04 (in Hébert et al., 2009, off-text map), the author named these metasedimentary rocks the “Saint-Onge Supracrustal Sequence”. Gervais (1993) divided these supracrustal rocks into five informal units, taken up by Hébert et al. (2009). The work of Moukhsil and El Bourki (2020) identified four of these units in the Normandin area (sheets 32A16 and 32A09). 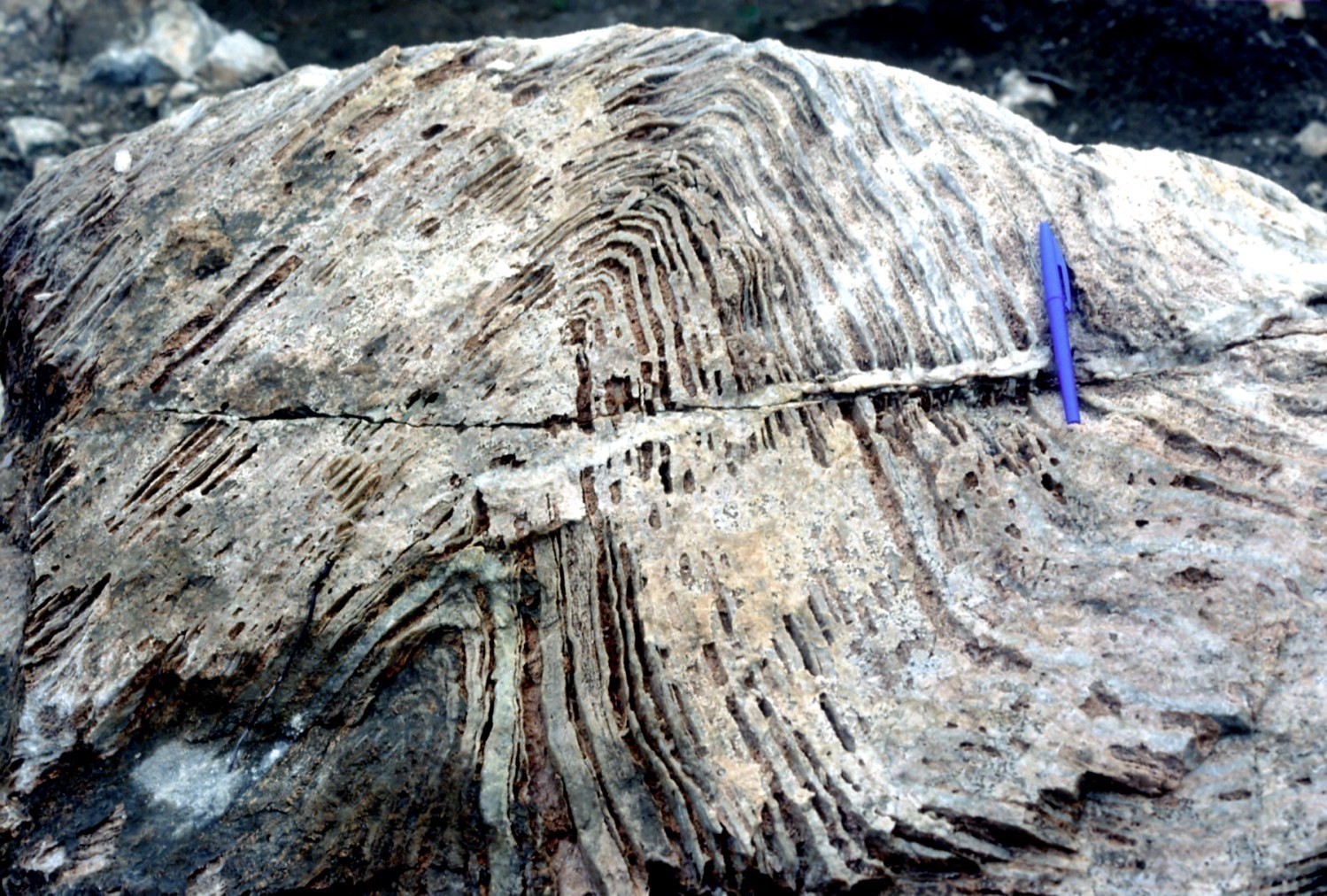 Unit mPong1 consists of wollastonite skarn that forms a kilometric zone interstratified in marble and calcosilicate rocks of the supracrustal sequence in the Grandes Pointes Lake area. Gervais (1993) mentions that very thin layers of wollastonite skarn have also been observed in the Savard and Cypress lakes area (sheet 22E04). Wollastonite skarn is greyish and homogeneous. It contains on average 30% wollastonite (Hébert and Jacob, 1995) and displays tectometamorphic banding that is generally folded and emphasized by alternating wollastonite and diopside bands (1-3 cm thick). Diopside bands contain some wollastonite, calcic plagioclase, K-feldspar and quartz. Accessory minerals are calcite, garnet, titanite, pyrite and zircon.

Calcosilicate rocks of this unit are grey to greenish grey and contain diopside, quartz, calcite, calcic plagioclase, scapolite and pyrite. Locally, diopside-rich layers (up to 90% of the rock) are present in these calcosilicate layers. Accessory minerals are garnet, K-feldspar, phlogopite, epidote, biotite, hornblende, titanite, tourmaline and zircon .

Marble of this unit is less abundant and contains up to 25% diopside, which gives the rock a grey to blackish colour. Accessory minerals are phlogopite, biotite, hornblende, plagioclase, scapolite, titanite and garnet. A large wollastonite deposit and some small zinc mineralized zones are found in this unit. 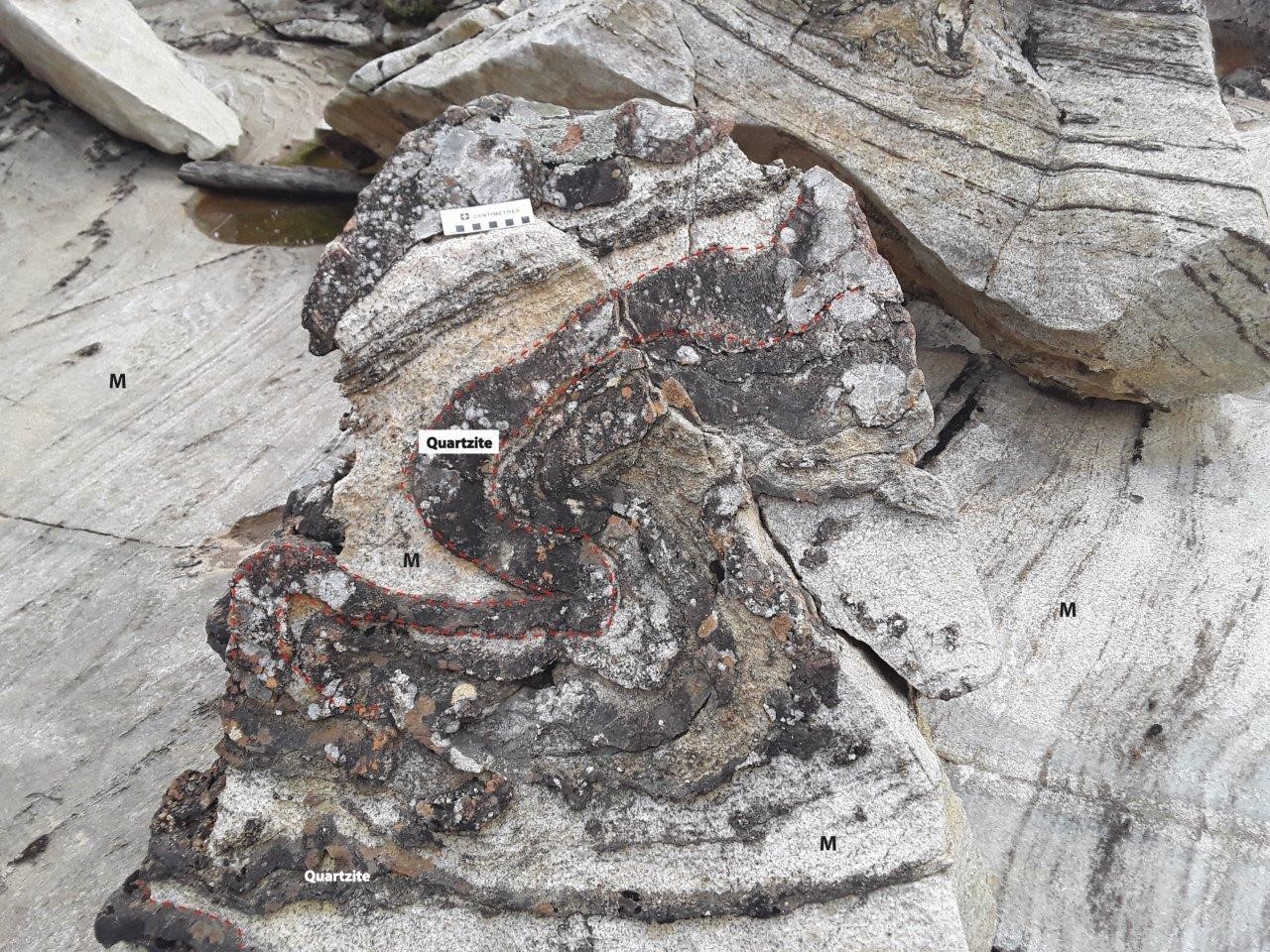 Calcosilicate rocks of this unit outcrop over significantly large areas in sheet 22E04, whereas they are less present in the Normandin area. Rocks are rust or buff-coloured and of various compositions depending on the proportions of quartz and feldspar (Gervais, 1993). The dominant calcosilicate mineral is diopside (up to 90% of the rock). Calcosilicate rocks alternate with layers a few metres thick of calcosilicate paragneiss or garnet quartzofeldspathic paragneiss. In places, they are accompanied by marble with or without olivine and millimetric to centimetric layers of impure quartzite. Marble is whitish to greyish, coarse grained and contains graphite flakes (<1% of the rock). Quartzite layers also contain traces of graphite. Locally, marble and quartzite layers are significantly deformed and exhibit isoclinal folds (outcrop 19-AM-180).

Unit mPong3 consists of an assemblage of marble and calcosilicate rocks, and includes two subunits: mPong3a and mPong3b. What differentiates these two subunits is the amount of olivine in marble.

Marble of unit mPong3a is generally white in fresh exposure and greyish in altered surface. It is composed of ~95% calcite and some quartz. The rock is fine to medium grained and forms metre-thick beds. Locally, it may contain 25% to 30% olivine in greyish layers. If olivine is serpentinized, marble takes on a yellowish or locally greenish colour. Calcosilicate rocks are greenish in fresh and altered surfaces. They are medium grained, enriched in diopside (50-90%) and have a granoblastic and banded texture. Banding is centimetric and displays carbonate and silicate bands, and locally, a minor amount of thin quartzite beds. 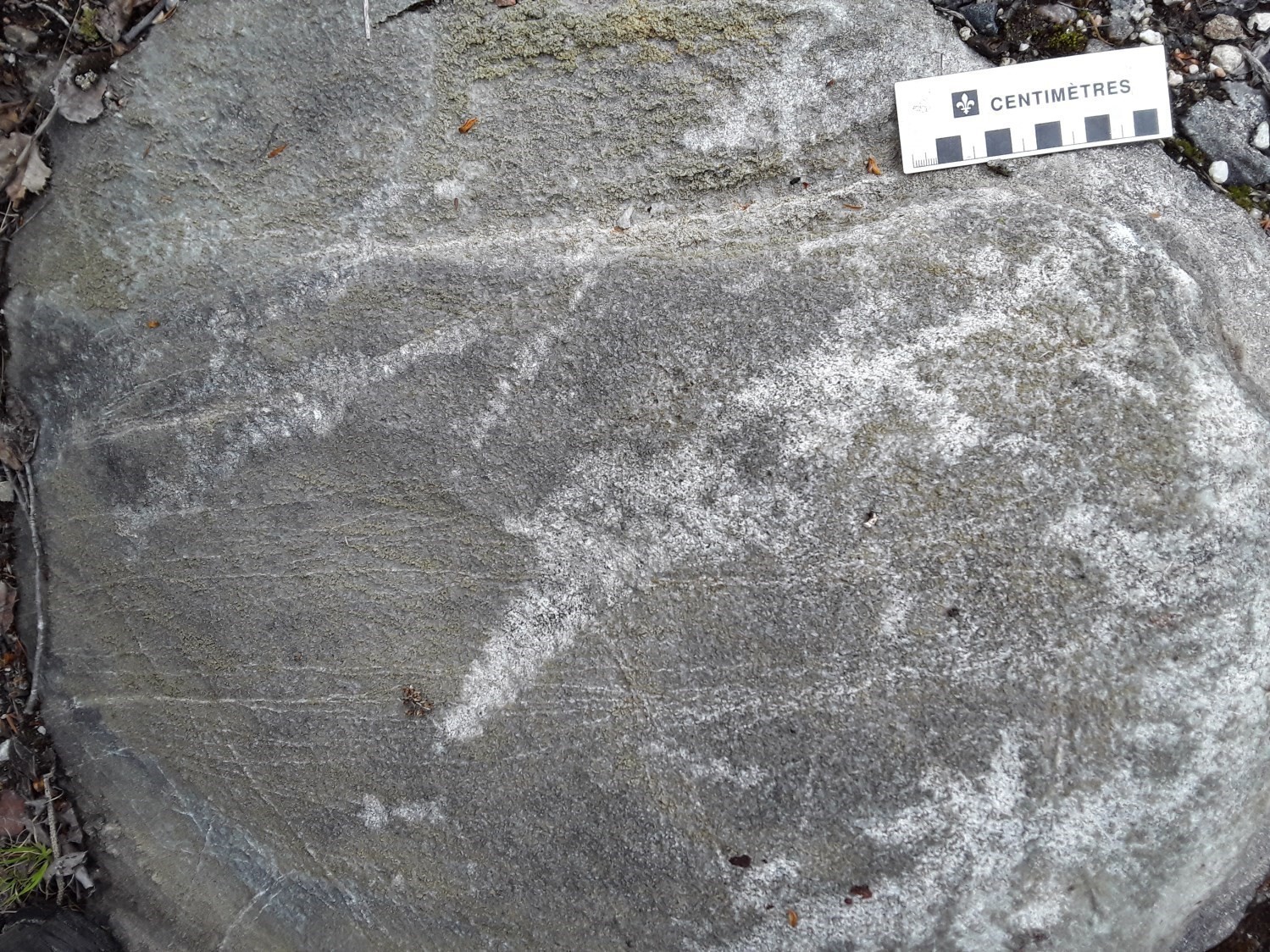 Unit mPong3b was defined in the SW part of sheet 22E04 (Gervais, 1993), where it occurs as kilometre-long and decametre-wide layers. It also outcrops in sheet 32A16 as folded layers in quartzofeldspathic paragneiss of the same supracrustal sequence (mPong5). In sheet 22E04, the largest marble strips are located north of Grandes Pointes Lake. Near the Rats River in the village of Saint-Eugène-d’Argentenay, the best rock outcrops of this unit are found in two quarries (Bouchard – Grenon and Pères Trappistes).

Marble is mainly calcitic, white to grey, coarse grained and locally banded. It contains calcite with traces of phlogopite and graphite. Some dolomitic and calcosilicate marble layers have also been observed locally. Calcosilicate rocks are greenish, fine to medium grained and composed of diopside, calcite, phlogopite, <1% scapolite and trace pyrite. 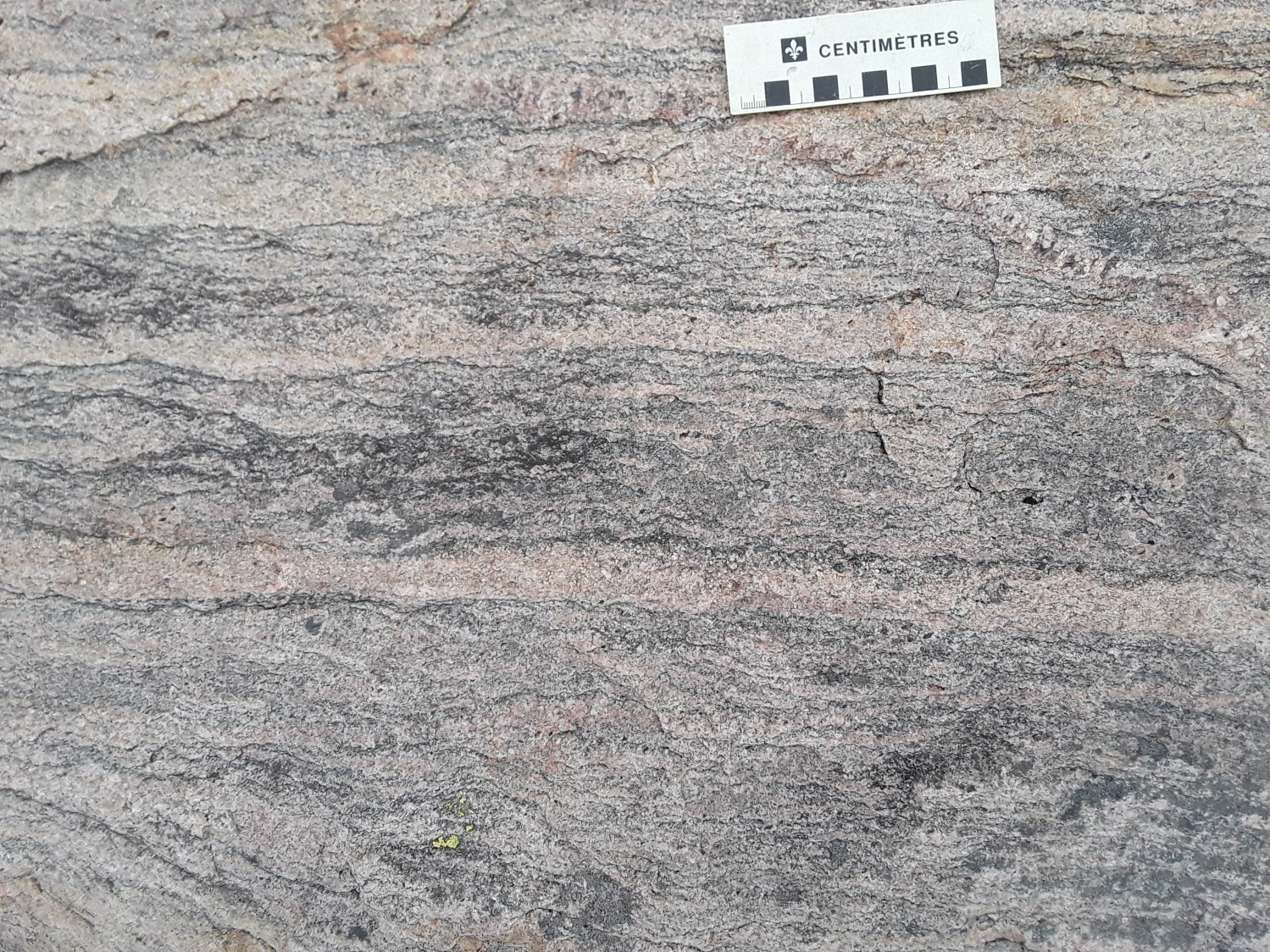 Unit mPong5 was mapped by Gervais (1993) at the western boundary of sheet 22E04, SW of Ouest Lake, where it does not exceed 8 km2; it outcrops more in the Normandin area (sheet 32A16). It consists of fine to medium-grained greenish grey quartzofeldspathic paragneiss containing quartz, K-feldspar, biotite, hornblende, augite and enstatite. These rocks are locally interbedded with quartzite and calcosilicate rock layers, and some millimetric marble layers in places. At the contact between unit mPong5 and the Sainte-Hedwidge Intrusive Suite (mPshe2; sheet 32A16), quartzofeldspathic paragneiss is highly cut by pink granite dykes and pegmatitic veins giving a granitic gneiss appearance to the rock.

Marble strips are generally thin and their extension is difficult to follow. Their thickness can be evaluated in the Bouchard – Grenon and Pères Trappistes quarries. In the former, marble layers are predominant and can reach a thickness of 3 m. In the second quarry, marble layers observed show strips exceeding 5 m in thickness.

Ider (1997) and Higgins et al. (2002) obtained an age of 1160 ±20 Ma and 1163 ±18 Ma respectively on a wollastonite skarn sample belonging to the Saint-Onge Supracrustal Sequence (mPong1). These ages correspond to the crystallization age of wollastonite formed by contact metamorphism induced by the emplacement of the Du Bras Granite (1148 ±5 Ma; Ider, 1997).

North of Grandes Pointes Lake (sheet 22E04) and in the two quarries mentioned above (sheet 32A16; Bouchard – Grenon and Pères Trappistes), rocks of the Saint-Onge Supracrustal Sequence are cut by mafic (gabbro, gabbronorite, amphibolite) and felsic (granite) dykes or sills. Amphibolite enclaves and boudins are also found in calcitic marble.