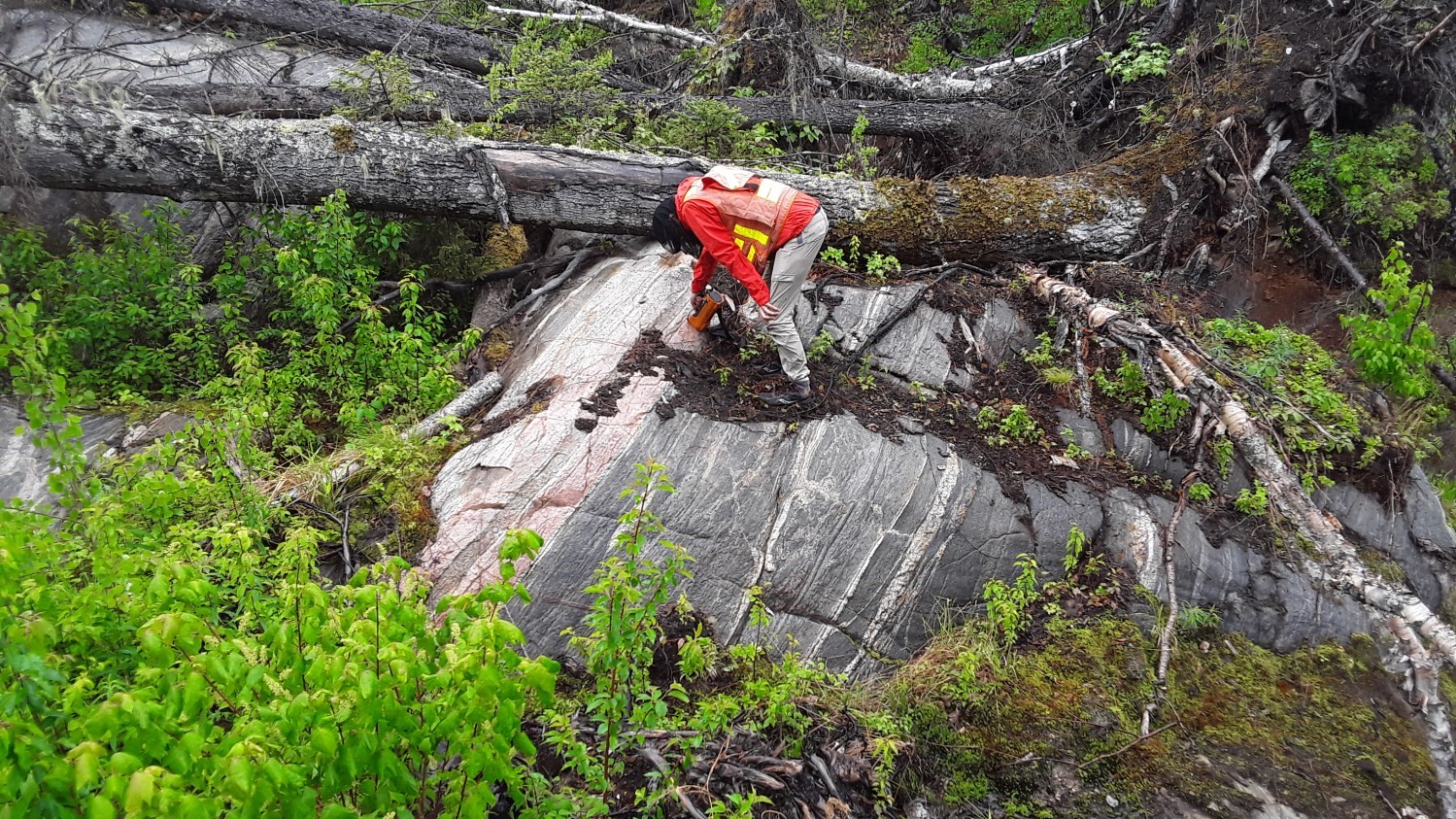 The Lac Rond Structural Domain was defined following the geological survey carried out by Moukhsil and El Bourki (2020). This survey was carried out during the summer of 2019 in the Normandin area, NW of Lake Saint-Jean (sheets 32A09, 32A10, 32A15 and 32A16).

The morphology and extent of the Lac Rond Structural Domain have been defined in sheets 32A10, 32A15 and 32A16. The domain appears to continue northward (sheets 32H01 to 32H03) and westward (sheets 32A14 and 32A11). However, it is bounded to the east by the Patrick Ouest Structural Domain (DSpko) and to the south by the Sainte-Hedwidge (DShed) and Ministic (DSmin) structural domains.

The various outcrops of the Lac Rond Structural Domain have a planar structural fabric Sn that is expressed mainly by secondary mineral foliation, mylonitic foliation or banding in intrusive rocks, or by gneissosity or migmatitic banding in metasedimentary rocks of the area.

The Lac Rond Structural Domain (DSrnd) is characterized by a fairly heterogeneous trajectory of the planar fabric (Sn) in the various units that outcrop within it. The mean  direction is generally N-S with a mean dip eastward (mean foliation of 359°/39°). 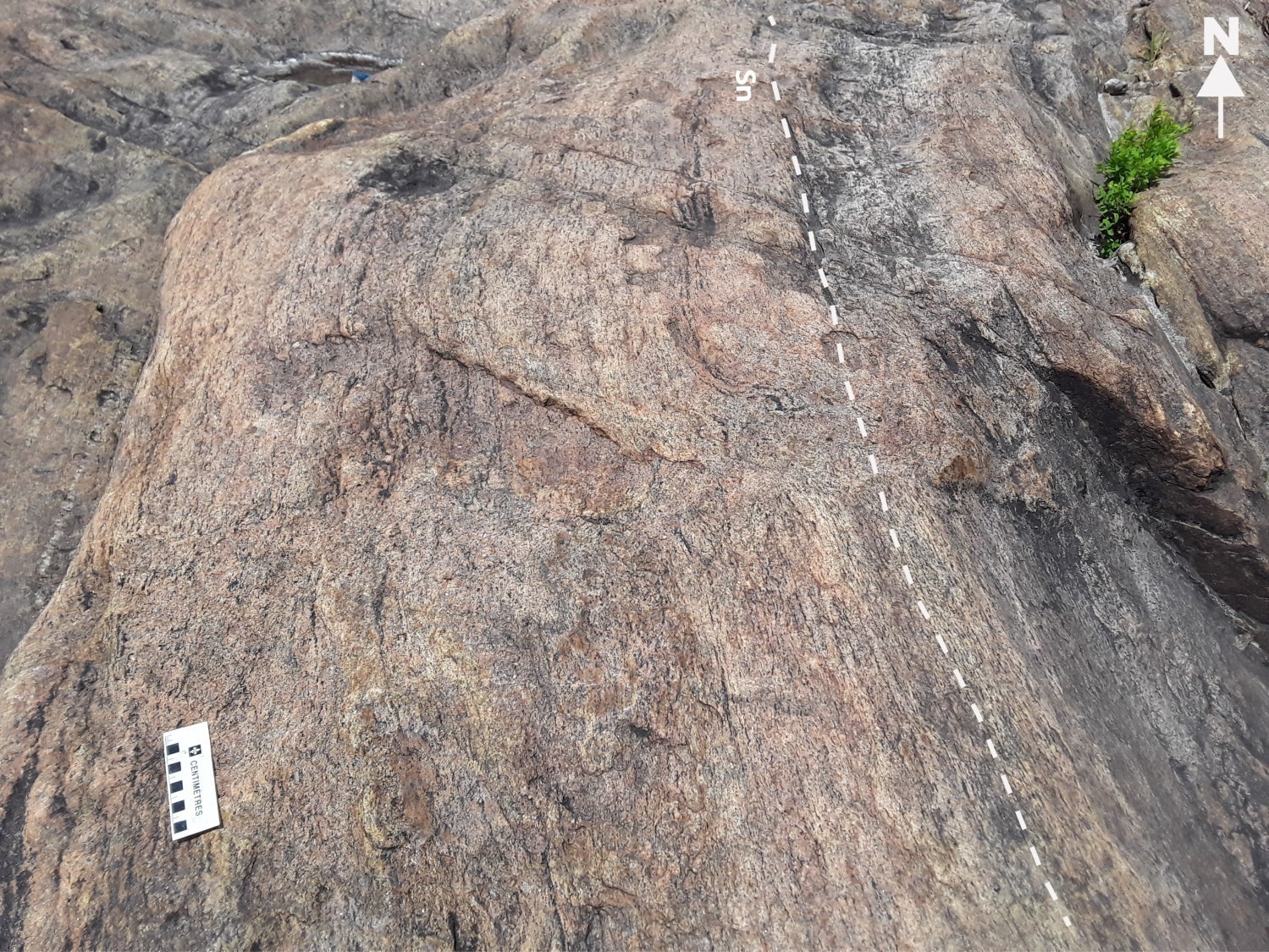 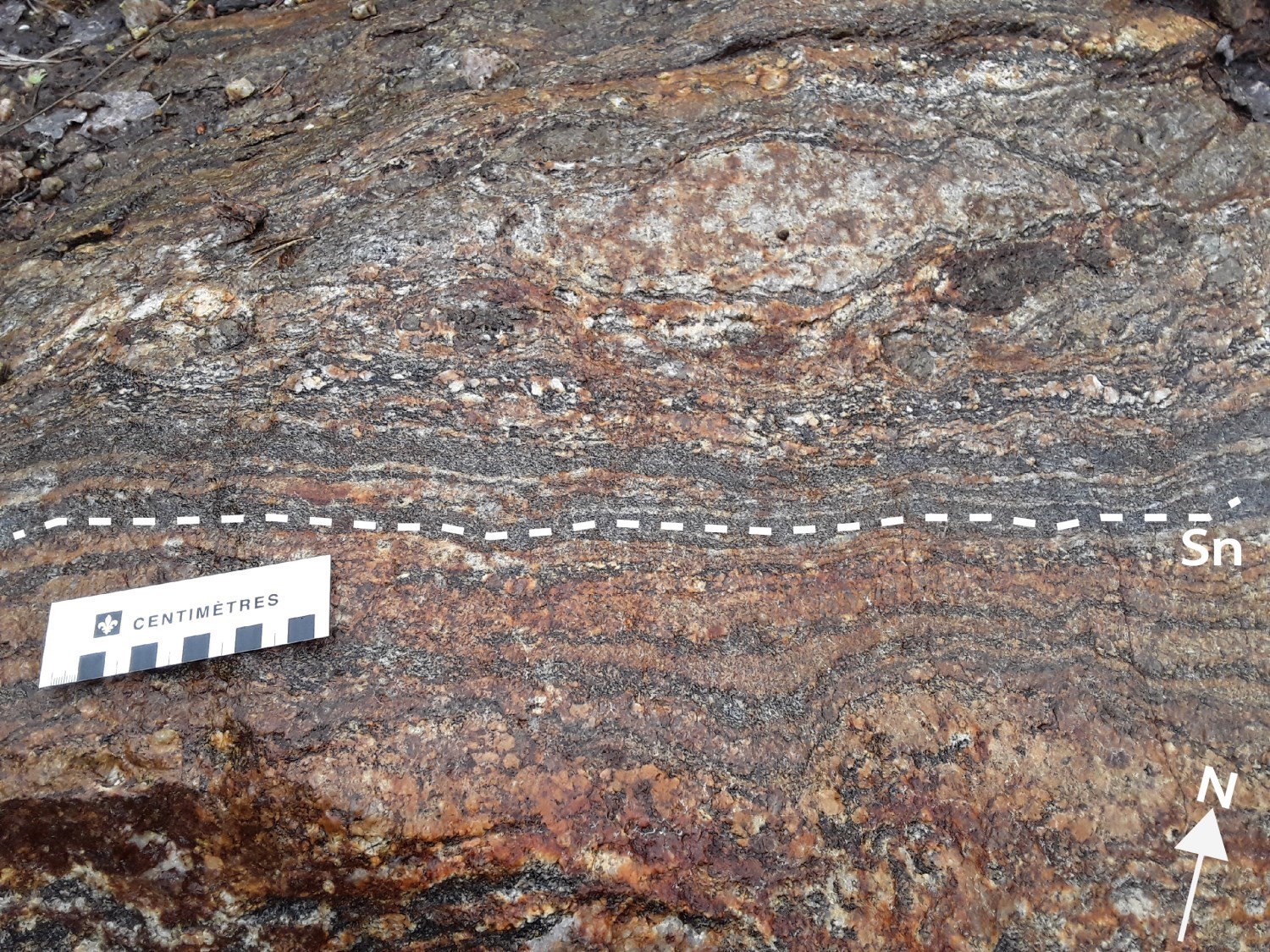 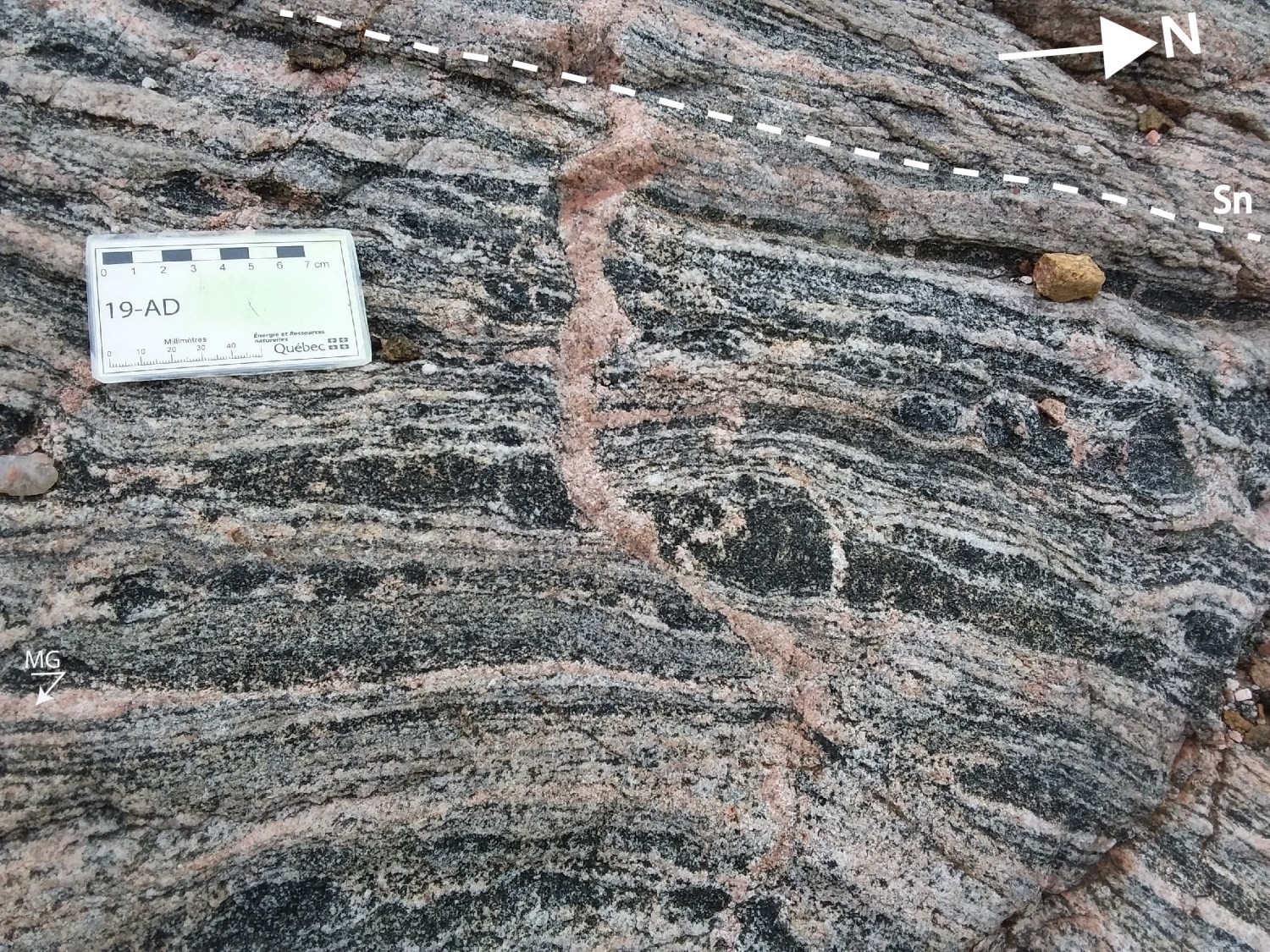 The Sn foliation bears a secondary tectonometamorphic mineral and stretch lineation of variable attitude from one outcrop to the next resulting from several folding of the Sn fabric. The stereographic projection of measurements reflects this variability and allows determining a mean lineation oriented 85° and a mean plunge of 42° eastward. However, two subgroups of measurements can be distinguished: the first is oriented 139° with a plunge of 29° towards the SE, and the second is oriented 21° on average with a mean plunge of 22° towards the NNE. 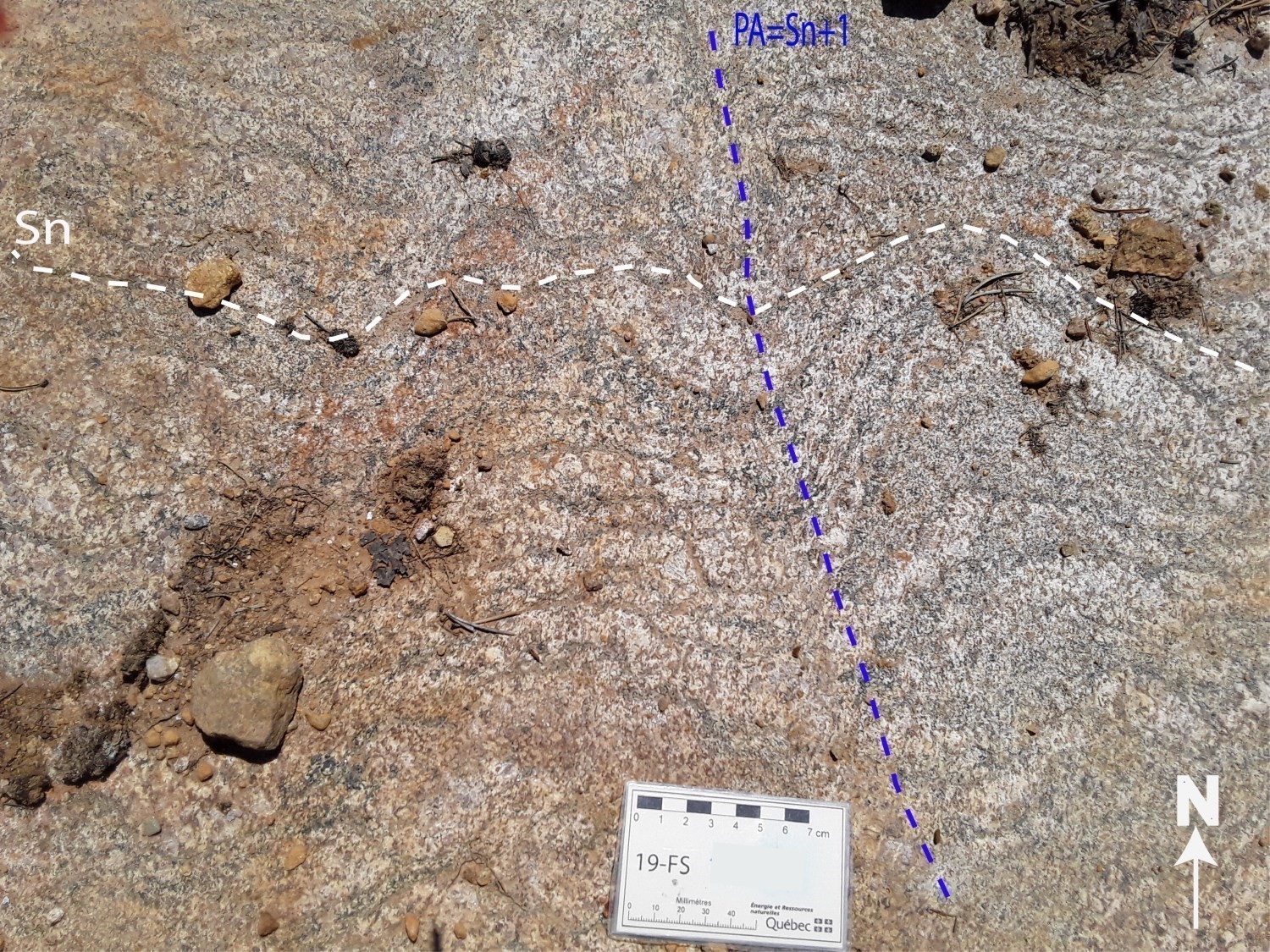 In the Lac Rond Structural Domain, the tectometamorphic foliation Sn+1 was observed on only a few outcrops, where it intersects the Sn foliation. This Sn+1 deformation phase was rarely measured, as it is confused with the main Sn factory. In general, it is characterized by the flattening of quartz grains, feldspar grains, or both, as well as by the preferential orientation of ferromagnesian minerals (biotite) clearly visible in fold hinges.

Analysis of the distribution of geophysical lineaments interpreted from maps of the total magnetic field and its derivatives (Intissar and Benahmed, 2015) and of the planar fabric, allow distinguishing at least two families of folding in the Lac Rond Structural Domain (DSrnd).

In the eastern part of the domain, the trajectory of the Sn foliation (interpreted from the structural data and magnetic lineaments) marks, in the Sainte-Hedwidge Intrusive Suite (mPshe2), the presence of four regional folds whose axial plane trace is roughly oriented NNE-SSW to N-S. The attitude of magnetic lineaments indicates alternating upright synform and antiform folds.

In the Mailles Batholith located in the centre of the domain, two folding phases were determined by the trajectory of the Sn foliation. The first phase of upright synform attitude, with an axial plane trace of curvilinear appearance oriented NE-SW, is folded by the second phase of upright antiform attitude and NW-SE direction. 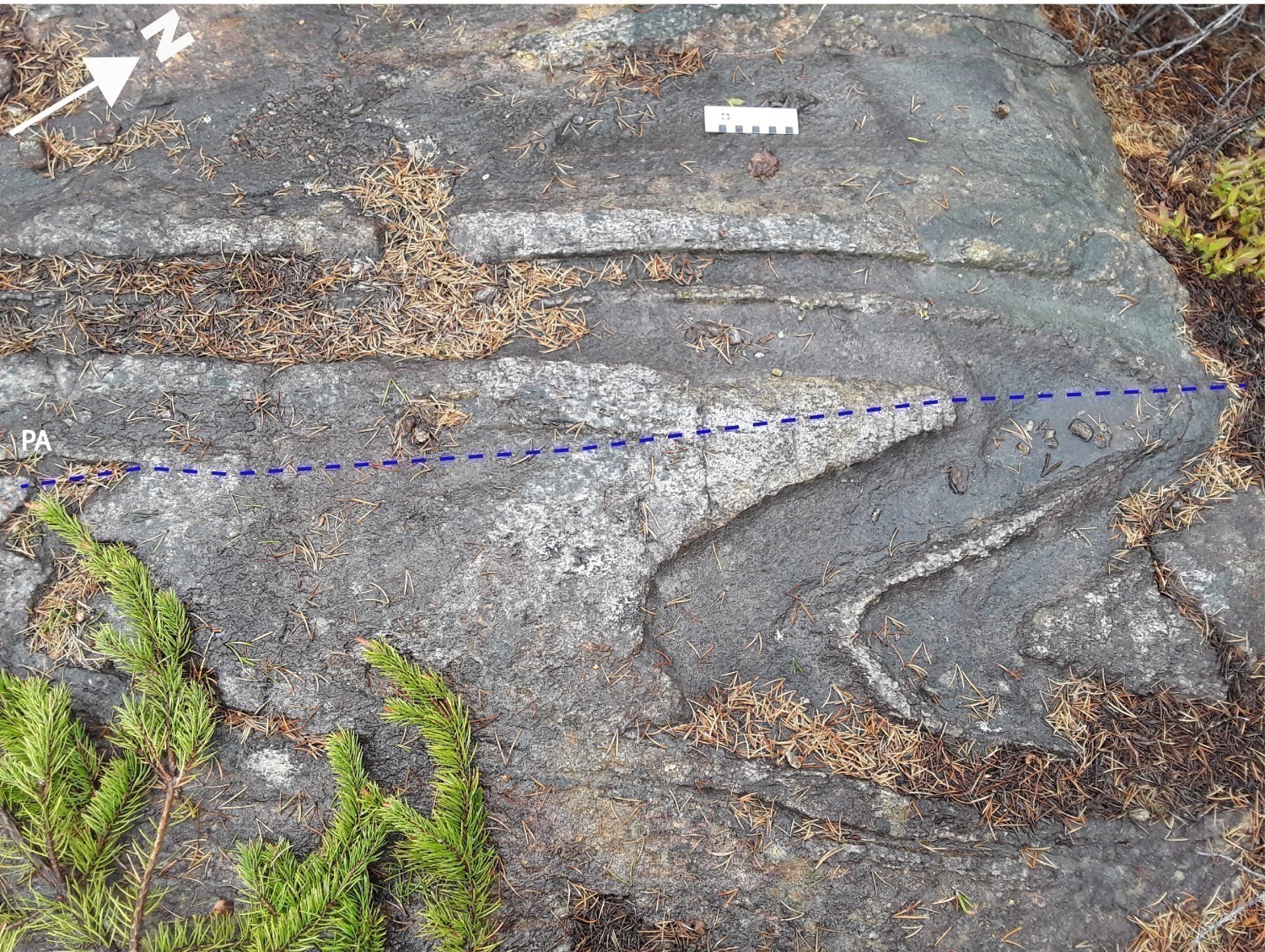 In the northern part of sheet 32A15, in the Saint-Thomas-Didyme Suite (mPstd2) and paragneiss of the Barrois Complex (mPboi4 and mPboi4c), there are two regional folds whose axial planes are generally oriented NNE-SSW (antiform attitude for the fold to the east, and synform attitude for the fold to the west). Analysis of the foliation around axial planes indicates that these folds are, in general, overturned towards the NW. At the scale of the outcrop, Z folds with a tight opening angle were observed in migmatitic paragneiss of the Barrois Complex (mPboi4c) with an inclined axial plane of reclined fold oriented 28.81°. This type of fold is interpreted as a second-order « parasitic » fold in a major fold.

In the northern part of the Mimosa Plutonic Suite (mPmim1), the trajectory of the Sn foliation reveals synform attitude folding overturned towards the NE with an axial plane trace oriented NW-SE.

The Lac Rond Structural Domain is cut by three families of faults deduced from field observations or maps of the aeromagnetic field and its derivatives (Intissar and Benahmed, 2015).

The N-S family is represented by two normal faults of kilometric extent (respectively 10 km and 30 km long) and a reverse fault ~5 km long.

The NW-SE family is represented by faults inferred from geophysical survey to the east (sheet 32A16) and in the NW part of the domain (sheet 32A15), and by a ~15 km long reverse fault located in the SW part. The latter brings the Bardeau Plutonic Suite and Lachance Mangerite into contact with the Sainte-Hedwidge Intrusive Suite (mPshe2).

The NE-SW family is characterized by faults inferred from geophysical survey in the western part of the domain (sheet 32A15) with an estimated extent of 4 to 20 km.

The Lac Rond Structural Domain has undergone at least two phases of regional deformation and folding in domes and basins, which are characterized by a heterogeneous planar structure. The Sn foliation marks the early phase of deformation Dn and is generally represented by:

The Sn planar structure was folded by a Dn+1 deformation phase producing antiforms and synforms upright and overturned towards the NW with an axial plane trace oriented N-S to NNE-SSW. This phase is probably associated with E-W to ESE-WNW shortening and foliation of the axial plane Sn+1 easily differentiated from Sn in fold hinges, but less widespread in the field.

The Dn+2 deformation, less signfificant, created upright antiforms and synforms overturned towards the NE and generally oriented NW-SE. In places, this phase folded structures of the Dn+1 phase.

About a hundred samples of different lithostratigraphic units of Lac Rond Structural Domain (sheets 32A15 and 32A16) were studied under a polarizing microscope. The objective was to determine the type and distribution of metamorphism in the domain. Mineralogical and petrographic parageneses of these samples show that metamorphic conditions have reached the granulite facies characterized by the presence of orthopyroxene on all lithostratigraphic units, with the exception of a few places at the upper amphibolite facies. For example, in the contact zone between the Allegrin and Mimosa plutonic suites and the Bardeau Plutonic Suite, in the SW part of the domain and within calcosilicate rocks of the Barrois Complex (mPboi4 and mPboi4c; NE part of sheet 32A15), an assemblage of biotite-amphibole (hornblende) ferromagnesian minerals, without pyroxene, is observed. This could be the result of retrograde metamorphism from the granulite facies to the upper amphibolite facies.

The high-resolution total magnetic field signal (Intissar and Benahmed, 2015) in the Lac Rond Structural Domain indicates a heterogeneous geophysical pattern with highly contrasted magnetic zones. In the eastern part of the domain, rocks of the Sainte-Hedwidge Intrusive Suite (mPshe2) show an isotropic magnetic structure with strong magnetic susceptibility. In rocks of the Mailles Batholith (mPmas), Mimosa Plutonic Suite (mPmim1) and Allegrin Plutonic Suite (mPalg), the magnetic structure is annular and elliptical to circular with medium to high-banding density.

On the other hand, in paragneiss and calcosilicate rocks of the Barrois Complex (mPboi4 and mPboi4c) and intrusive rocks of the Saint-Thomas-Didyme Suite (mPstd2), the magnetic structure is more or less banded and curvilinear with a high magnetic contrast that reflects the alternation of these two units in the field.

Rocks of the Mimosa Plutonic Suite (1003 ±18 Ma; Papapavlou, 2019) are affected by the Sn planar fabric, which could mean that the Dn deformation in the Lac Rond Structural Domain is of Grenvillian age (event between 1085 Ma and 986 Ma according to Gower and Krogh, 2002). However, the Dn+1 and Dn+2 deformations that have restructured nits of the domain would be of Trans-Grenvillian age.