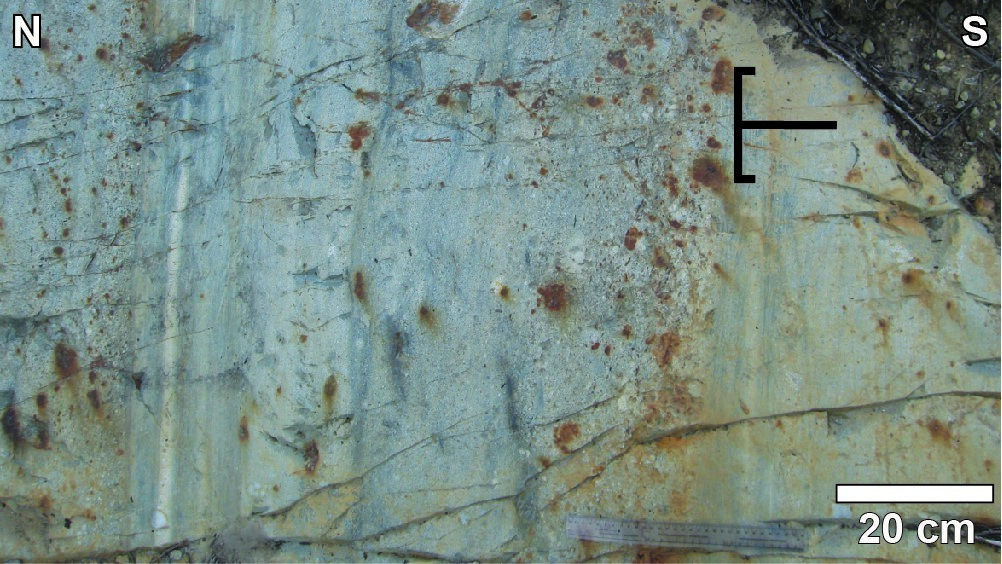 Mapping of the Blondeau Formation in the Geoff Lake area (sheet 32G16-200-0202) identified six facies with transitional contacts consisting of volcaniclastic and sedimentary rocks (Lefebvre, 1991). At this time, mapping details do not allow to specify the lateral extension of these six facies which, however, characterize the entire Blondeau Formation in association with variolitic basalt. These different lithologies are therefore grouped in unit nAbl. 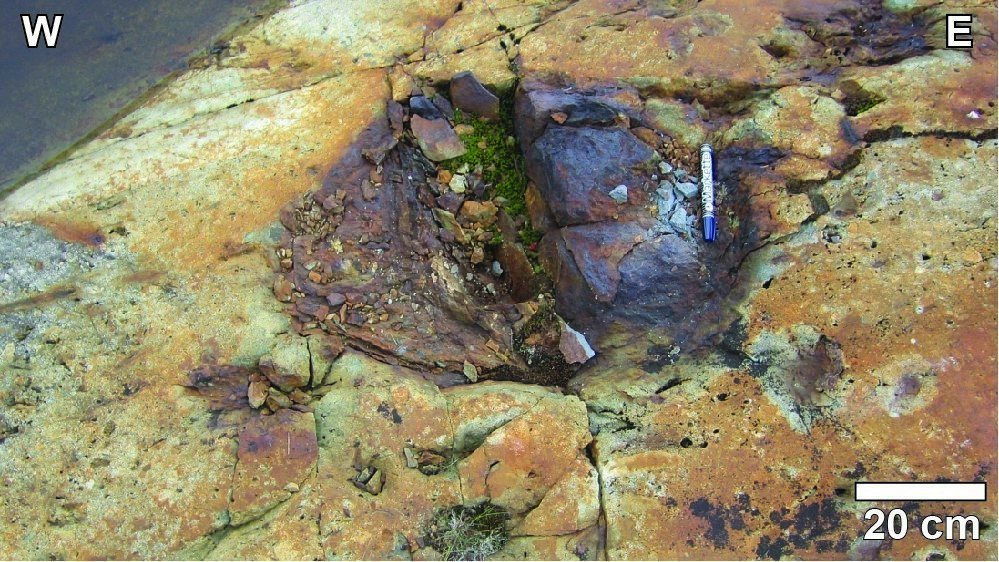 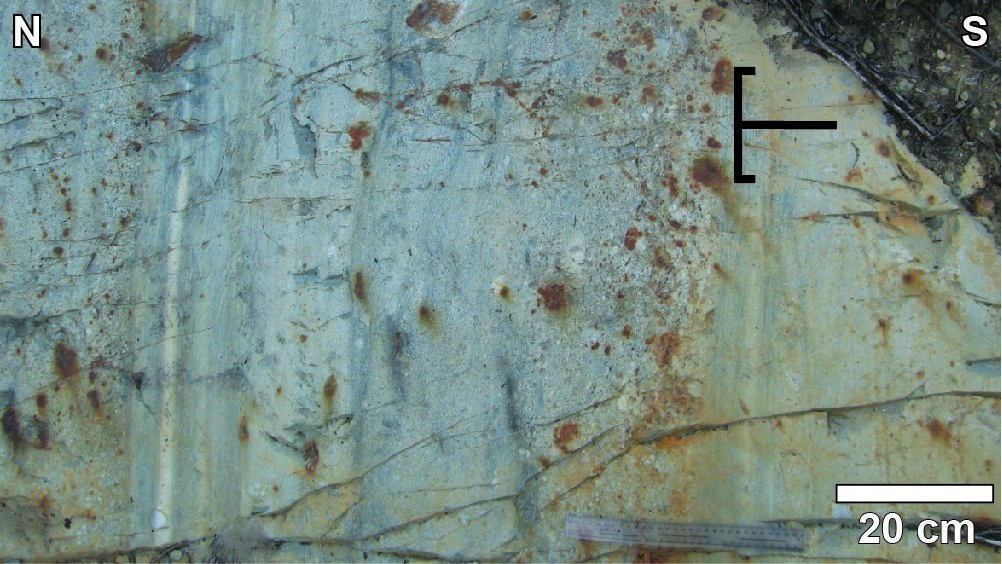 Facies 2 consists of finely bedded volcaniclastic rocks. This facies is characterized by decimatric to metric, light-grey to dark-grey sorted beds with parallel, oblique and cross-bedded laminations, as well as convoluted beds typical of the lower portion of a Bouma sequence (Ta-Tb-Tc-Td). The coarser parts of debris flows are composed of subangular to rounded fragments of medium-grey to beige intermediate to felsic volcanic rocks. Larger fragments commonly have a lighter rim that could indicate a high-temperature emplacement. 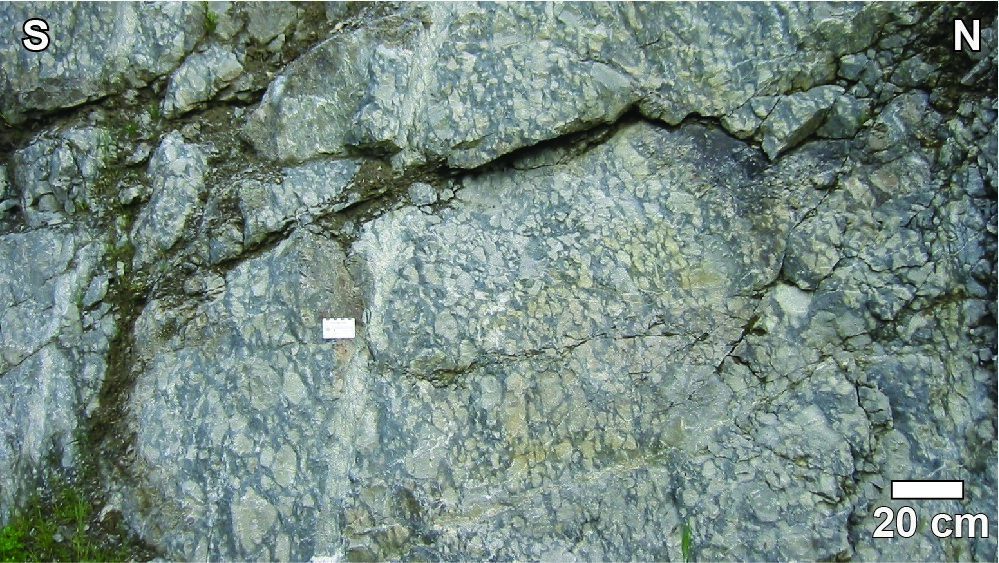 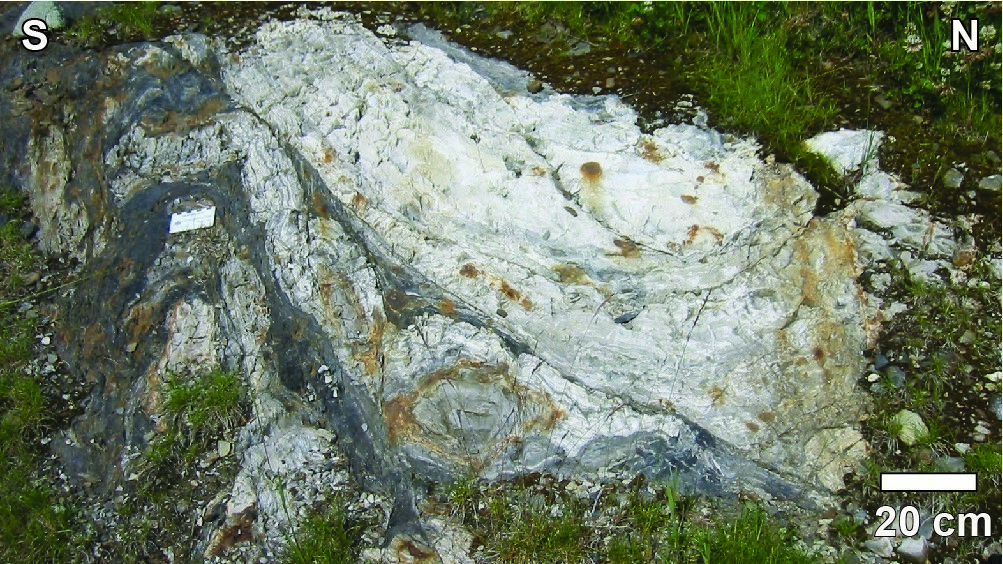 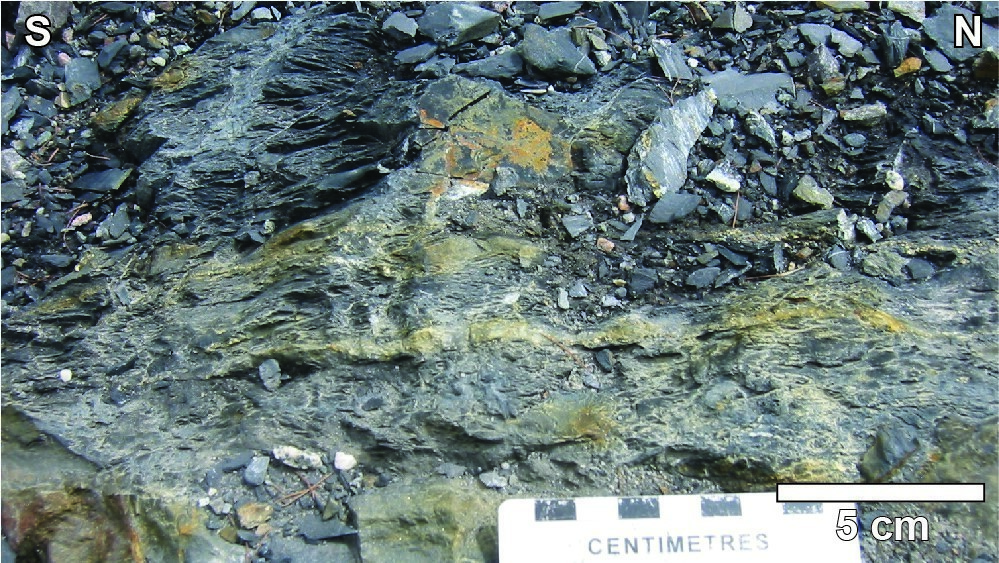 Facies 6 is a unit of siltstone, mudstone and ash tuff. This unit outcrops particularly well along Road 167 in the Cummings Lake section, as well as on type locality outcrops on the north side of the Chibougamau Syncline. It consists of centimetric to millimetric, dark-grey to black graphite-rich beds, and locally contains beds of euhedral, nodular or framboidal pyrite. This facies has also been recognized over an E-W distance of more than 2 km northwest of Dolomieu Lake (sheet 32G14-200-0102) as discontinuous lenses a few tens of metres thick located in contact with gabbroic sills (I3Ac).

The area between Cooke Mine and Laura Lake (sheet 32G15-200-0102) is characterized by massive flows of grey rhyolite and rhyodacite containing up to 5% plagioclase phenocrystals, interstratified with volcaniclastic rocks (Morin, 1994). These felsic rocks were not recognized by Lefebvre (1991) in the Chibougamau area.

Detailed study of the facies characterizing the Blondeau Formation was made possible through stratigraphic drilling carried out in 1979 by the Ministère in the Barlow Lake area northeast of Chapais (sheet 32G15-200-0202; Morin et al., 1996). The different facies recognized by Archer (1983) during analysis of drillings correspond to those defined by Lefebvre (1991) in the Marianne Lake area north of Chibougamau. These correlations are illustrated in the table below. 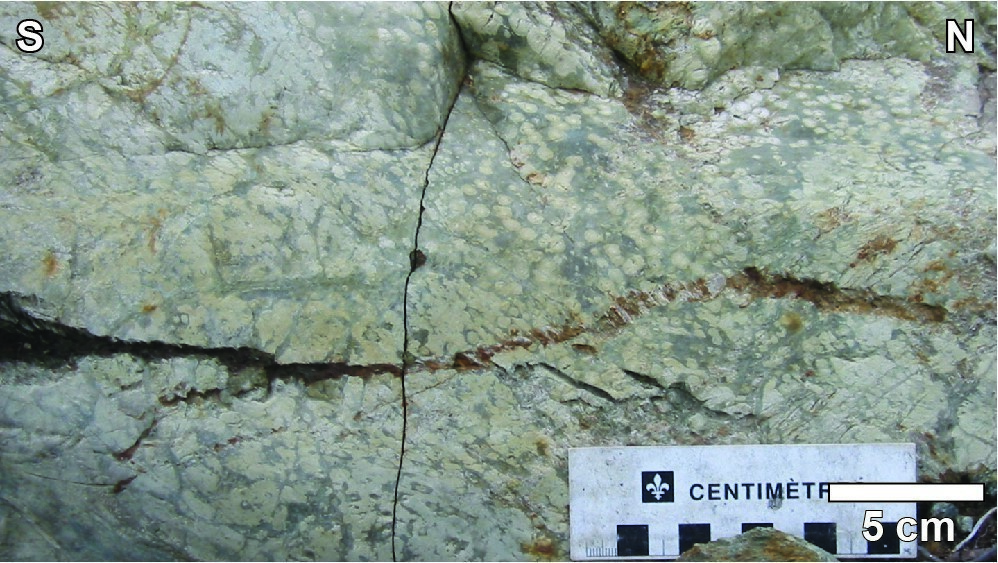 The basal part of the unit, in close proximity to contact with mafic volcanic rocks of the Bruneau Formation, is characterized by the presence of basalt and andesitic basalt, which commonly have a variolitic texture. These massive, pillowed and brecciated basalts form unit nAbl1. Light green, they typically contain 1 to 40% millimetric to centimetric varioles. Variolitic lava has been recognized at several locations including: (a) east of Marianne Lake (sheet 32G16-200-0202); (b) at the base of the reference section exposed at the edge of Road 167, along a NE-oriented segment between Cummings Lake and the northern boundary of sheet 32G16 (Duquette, 1970); (c) northeast of Roberge Lake on the UMA Property mineralized stripping (sheet 32H13-200-0201); (d) on an outcrop south of Philippon Lake (sheet 32G15-200-0202); and (e) along Road 113, near the western exit of the town of Chapais (sheet 32G15-200-0101). Unit nAbl1 also has a series of shallow flows (<2 m) of massive, pillowed and brecciated basalt without variolitic texture. In section, the long axis of pillows is 30 to 40 cm in diameter. Upper in the unit, pillows contain vesicles and amygdules evenly distributed throughout the rock (up to 2%). Breccia fragments (up to 15 cm in diameter) are distinguished from the darker chloritic matrix by their beige to light green colour. 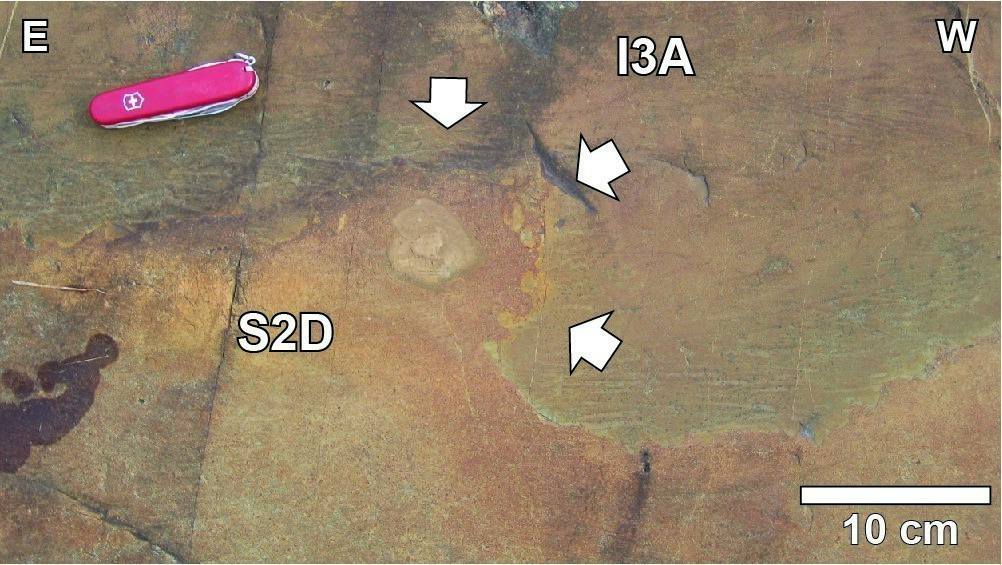 At Marianne Lake (NTS sheet 32G16-200-0202), peperitic textures indicate that sedimentary rocks of the Blondeau Formation were not yet consolidated during intrusion of the Roberge Sill, which is the basal unit of the Cummings Intrusive Suite (Lefebvre, 1991). Emplacement of these two units can therefore be considered synchronous. This field relationship is confirmed by the maximum sedimentation age of an arkosic arenite of the Blondeau Formation (<2721 ±3 Ma; Leclerc et al., 2012), similar to the crystallization age of a quartz ferrodiorite of the Bourbeau Sill (2716.7 +1.0/-0.4 Ma; Mortensen, 1993).

The basal contact of the Blondeau Formation with massive, pillowed and brecciated mafic flows of the Bruneau Formation is characterized by the appearance of variolitic basalts. Elsewhere, contact between the Bruneau and Blondeau formations is generally masked by ultramafic to mafic intrusions of the Cummings Intrusive Suite.

In the Chapais Syncline (sheets 32G09-200-0202, 32G15-200-0101 and 32G16-200-0102), the upper contact of the Blondeau Formation with sedimentary rocks of the Haüy Formation is represented by an erosional discordance. In the Dollier Lake area (sheet 32G09-200-0202), discordance between the Blondeau and Haüy formations is obliterated by the Kapunapotagen Shear Zone (Daigneault, 1986). East of Waconichi Lake (sheet 32J01), small-lapilli grey tuffs of the Blondeau Formation are interstratified with grey-green arenites of the Bordeleau Formation (Caty, 1978; Moisan, 1992).

West of Chapais, rocks of the Blondeau Formation form three strips (sheet 32G14): the South Kapunapotagen Strip, the Sunset Lake Strip and the Chaleur Lake Strip. The South Kapunapotagen Strip forms a lenticular unit limited by the Kapunapotagen Shear Zone, to the north, and the Lac des Misérables Shear Zone, to the south. It is cut to the west by the Lamarck Shear Zone. The Sunset Lake Strip is also restricted to the west by the Lamarck Shear Zone and extends eastward to the north of Chapais. These rocks are located on the south side of the Chibougamau Anticline and have a polarity to the south.