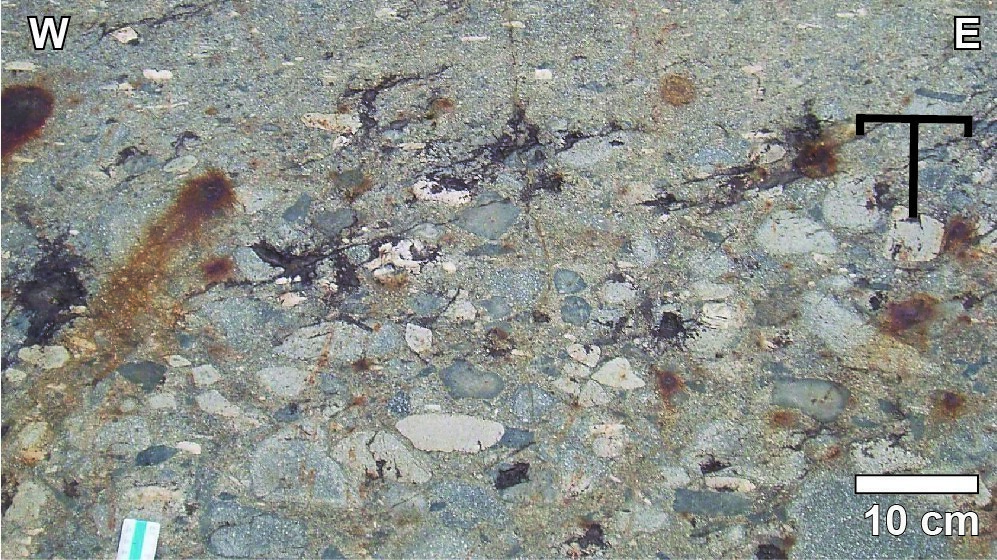 This unit was originally recognized as discontinuous lenses in the upper Gilman Formation north of the Chibougamau Pluton (Smith and Allard, 1960; Allard, 1976; McPhee and Winfield, 1976; Hamilton, 1977; Trudeau, 1981; Ludden et al., 1984; Couture, 1986; Daigneault and Allard, 1990). Recent mapping supported by lithogeochemistry and geochronology have shown that the transitional to calc-alkaline affinity unit has a lateral extent of >30 km and contemporary age to the Waconichi Formation (Leclerc et al., 2011). The Allard Member therefore formally designates this unit now integrated into the Waconichi Formation (Leclerc et al., 2011). 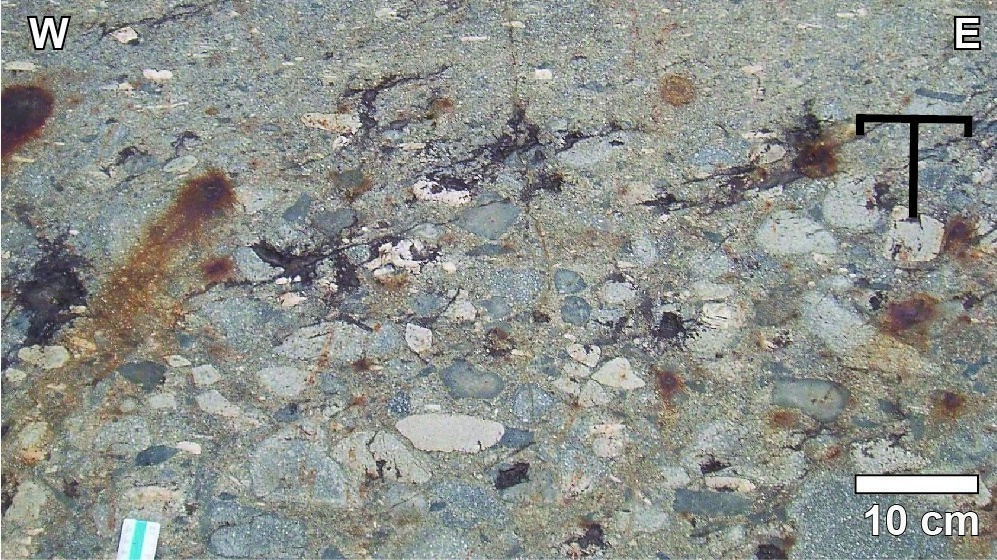 Unit nAard consists mainly of volcaniclastic rocks of basaltic to dacitic composition and includes a sommital portion locally characterized by a sequence of laminate metasedimentary rocks, pyritic chert and rhyodacite. Volcanilastic rocks form generally sorted sequences with fine-grained beds showing erosion channels, oblique laminations, folds and synvolcanic faults. Coarse to fine-lapilli tuffs are characterized by the presence of angular to subangular fragments in positive relief, stretched and flattened in the regional schistosity plane, and abundant chert and sulphide fragments. Fragments of black to green mafic volcanic rocks are aphyritic and fine grained, while beige to grey fragments are intermediate to felsic and contain >25% plagioclase phenocrystals. Some fragments of volcanic rocks also contain pyroxene phenocrystals altered to actinolite. When preserved﻿, chert fragments are rectangular and oriented parallel to bedding. Rusty sulphide clasts consist of pyrite and pyrrhotine in a chert matrix. Fragments moulded on one another involve an emplacement at high temperature. Darker chilled margins of some of the fragments suggest a rapid cooling as they were deposited in volcanic ash.

The matrix of volcaniclastic rocks is grey to green and fine to medium grained. It is composed of a chlorite-sericite-carbonate assemblage and contains up to 25% millimetric plagioclase phenocrystals. In some areas, the high proportion of chlorite gives the matrix a dark green colour that contrasts with typically beige to white fragments. In places where sericite is the dominant mineral, the altered surface is commonly beige and is indicative of the presence of carbonate. Plagioclase crystal tuffs (20–25%, <1–5 mm) form beds a few centimetres thick when interbedded with lapilli tuff, but tuffs dominate the unit north of Gilman Lake and west of Proulx Bay (sheet 32G16-200-0201). 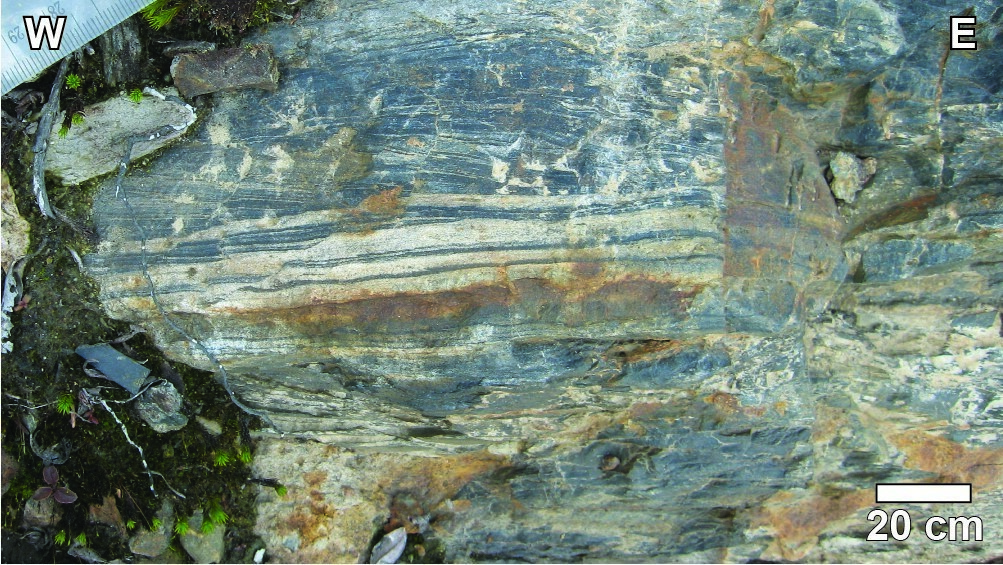 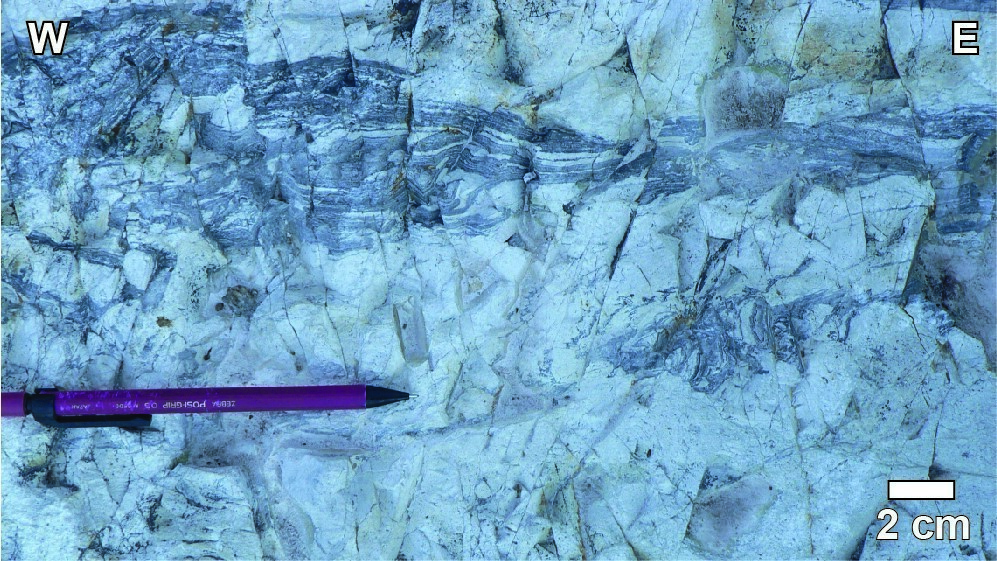 The summit of the Allard Member is particularly well exposed on a series of outcrops west of Proulx Bay (McPhee and Windfield, 1976; Trudeau, 1981). There, coarse-lapilli tuffs are overlaid by a light grey to white quartz porphyritic rhyodacite lens, estimated to be 450 m thick. At the top contact of the lens, there is a sequence of breccia and coarse-lapilli tuff of intermediate composition, chert-pyrite exhalite and turbidites consisting of siltstone and mudstone millimetric beds. The sequence is overlaid by felsic lava flows with laminar flow structure and characterized by intraformational folds and fragments whose shape suggests synvolcanic rotation. 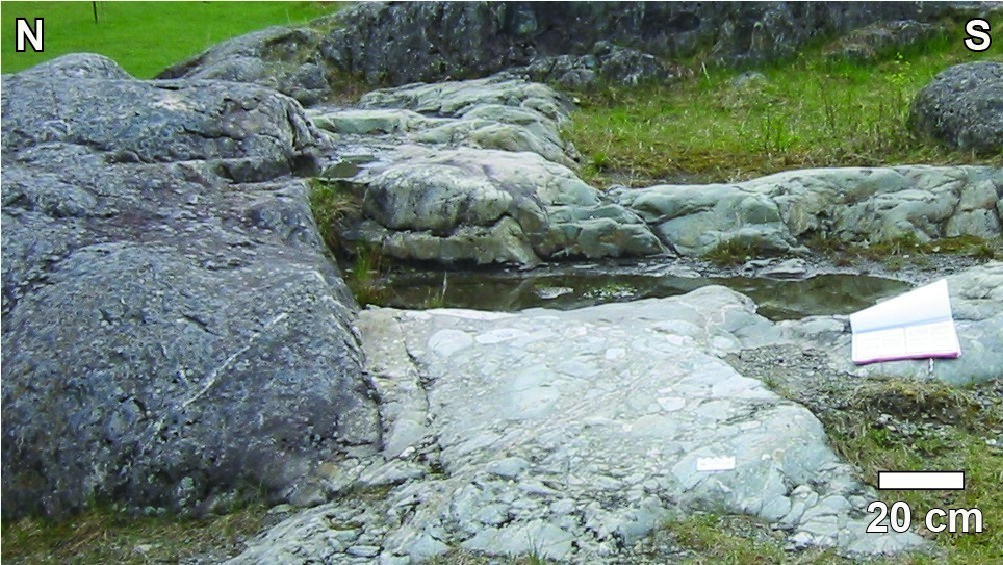 The base of the Allard Member consists of a unit of andesite and dacite exhibiting massive, pillowed and brecciated structures and of transitional to calc-alkaline affinity. This unit is characterized by a light green to white patina, which distinguishes it from underlying volcanic rocks belonging to the David Member of dark green patina and tholeiitic affinity.