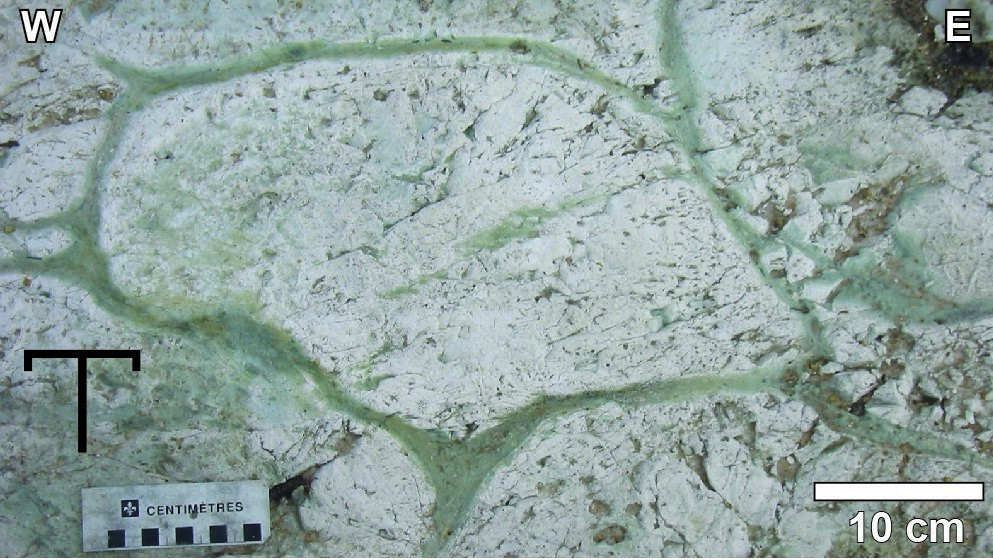 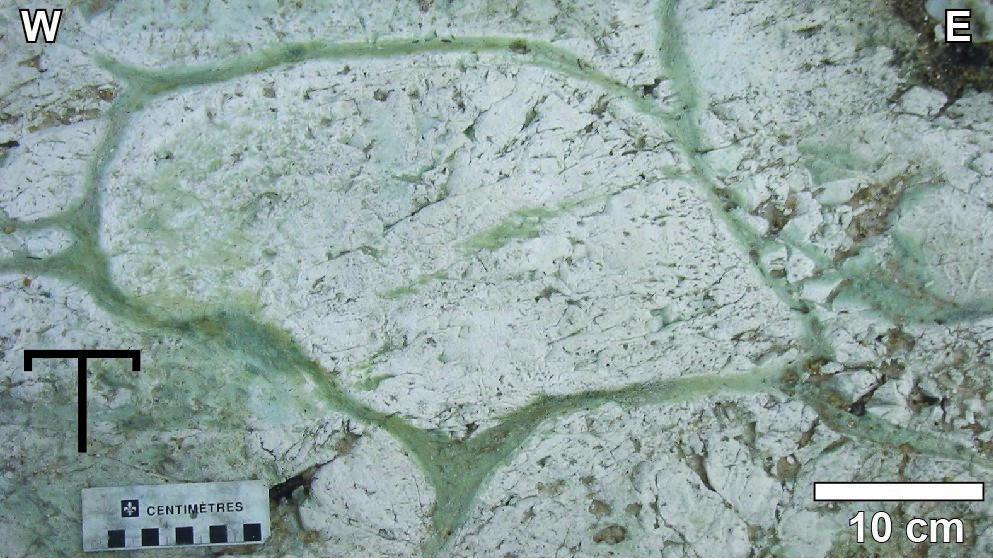 Mafic volcanic rocks make up more than 90% of the Bruneau Formation. The pillow facies is dominant in this unit, except in the upper portion. Massive, pillowed and brecciated flows forming unit nAbnu1 occur in succession over thicknesses ranging from a few metres to a few tens of metres. Pillows are decimetric to metric with dark green margins and triple junctions filled with hyaloclastic material. Primary cushion morphology is generally preserved and allows for measuring stratigraphic polarity. However, these structures are difficult to recognize in more heavily deformed zones. Mafic volcanic rocks of the Bruneau Formation have a distinctive light green to white patina, distinguishing them from mafic volcanic rocks of the Obatogamau Formation, which instead have a dark green patina. This lighter patina appears to indicate diffuse silica and epidote alteration (Trudeau, 1981). The rock is aphanitic to medium grained.

In thin section, the rock has millimetric (2%, <1-2 mm) plagioclase phenocrystals pseudomorphosed in epidote, chlorite or actinolite and uralitized pyroxene. The matrix consists of plagioclase microliths transformed into a chlorite-epidote ± albite ± carbonate ± titanite assemblage. The amygdaloidal texture is common and up to 20% of calcite amygdules are millimetric and locally showing a vermicular appearance. Amygdules composed of calcite and ankerite (2-3 mm) are concentrated on pillow margins and are deformed in the regional schistosity plane. Interstitial space between pillows is filled with hyaloclastic material altered in calcite, quartz and feldspar. These minerals are also found in millimetric veins. Locally, rusty alteration indicates the presence of sulphides, usually pyrite.

In deformation corridors, pillow basalts are transformed into chlorite-sericite schist with between-pillow spaces altered in ankerite. The brecciated facies normally represents a minor portion (<1%) of flows, except in a few areas where breccia thickness reaches more than 40 m. These thicker breccia zones contain light green angular fragments 2-10 cm in diameter. They are characterized by intense alteration associated with numerous veinlets of quartz, calcite, ankerite, chlorite and epidote, hematite and sulphides (PY-PO ± CP ± Au). Basalts in the northern part of the Houghton Pluton deformation aureole (sheet 32G14-200-0101) have a hornblende-garnet-plagioclase-quartz assemblage. These amphibolites have a banded structure formed by alternating hornblende or plagioclase-rich bands. Chlorite, epidote and magnetite alteration of hornblende indicates retrograde metamorphism to the greenschist facies. 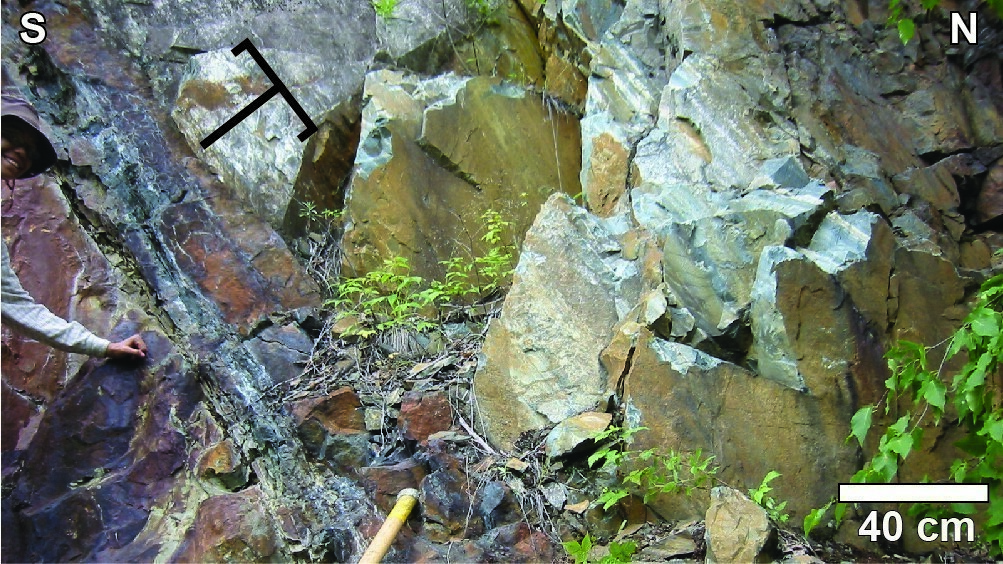 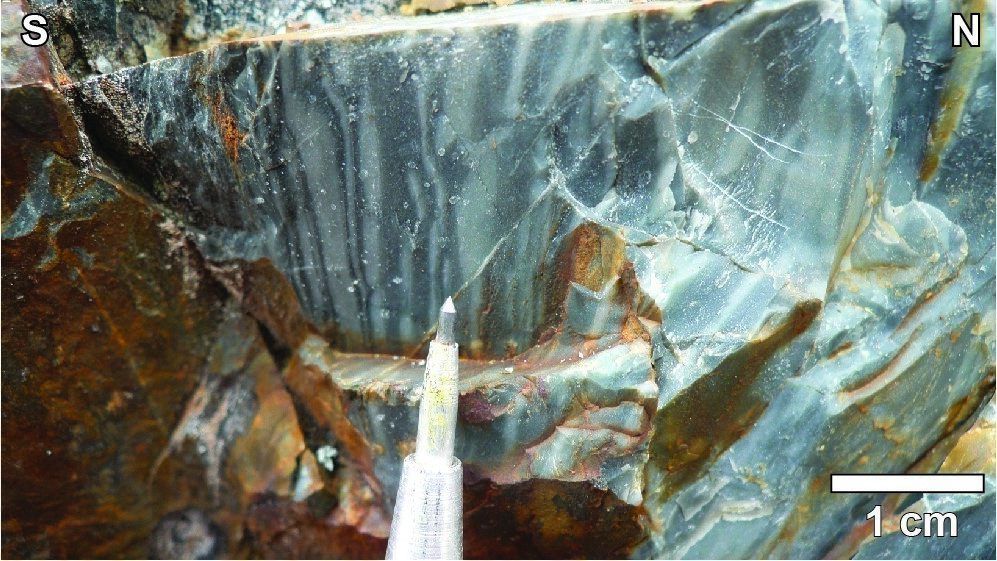 The Bruneau Formation contains a small proportion (1%) of volcaniclastic rocks (coarse to fine-lapilli tuffs) and rhyodacite grouped in unit nAbnu2. These rocks consist of thin lenses (usually less than 10 m wide) with limited lateral extension (less than 500 m long) interstratified with mafic volcanic rocks. At the Bruneau Mine, one of these lenses is cut at the base by a gabbroic sill. There, the medium-lapilli tuff outcrops over an estimated thickness of 5 m. In thin section, glass splinters are preserved in a chlorite ± sericite matrix. In outcrop, the white colour of lapilli suggests an intermediate composition. Tuff is overlaid by two beds of iron formation (95% magnetite, 5% pyrite, chalcopyrite traces) 40 and 80 cm thick respectively, separated by approximately 2 m of chert. These ferruginous horizons can be tracked laterally over two outcrops located a few hundred metres apart, but the presence of gabbro sills precludes an estimate of their regional extent. The top of the Bruneau Mine sequence is characterized by the reoccurrence of pillow mafic volcanic rocks. To the west of the Gwillim Mine (sheet 32G16-200-0201), a medium-lapilli tuff lens measuring a few tens of metres long is also associated with a pyritic chert exhalative horizon (Bouchard, 1986). In the Dolomieu Lake (sheet 32G14-200-0102) and Deux Orignaux Lake (sheet 32G14-200-0101) area, quartz-plagioclase-epidote-chlorite matrix lapilli tuffs form decametre-thick lenses. Lapillis essentially consist of plagioclase crystals elongated in the regional schistosity plane. Black chlorite is replacing some of devitrified glass splinters. East of Dolomieu Lake, one of these lenses includes a perlitic-textured rhyolite.

The Bruneau Formation ranges from two to three kilometres in thickness. It appears on the flanks of the Waconichi Syncline, Chibougamau Syncline and Chibougamau Anticline, from west of Chapais (sheets 32G14 and 32J03) to the Grenville Front Tectonic Zone (sheets 32H13 and 32I04).

On the northern flank of the Chibougamau Anticline (northern part of sheet 32G16), the Bruneau Formation base consists of pillow volcanic rocks that overlie lapilli tuffs and rhyodacites of the Waconichi Formation’s Allard Member. The unit’s upper contact is usually obscured by a shear zone located at the base of the Roberge and Ventures sills. However, west of Blondeau Lake, along Road 167 (sheet 32G16-200-0202), massive and pillowed flows of the Bruneau Formation are overlaid by variolitic lava forming the base of the Blondeau Formation. On the southern flank of the Chibougamau Anticline (sheets 32G09-200-0201, 32G09-200-0202 and 32G10-200-0202), effusive rocks of the Bruneau Formation conformably lie on volcaniclastic rocks of the Waconichi Formation (Queylus, Andy, Chevrier, Coyote, Îles and Lacs members). In the same area, the unit’s sommital contact is truncated by the Kapunapotagen Shear Zone, except in the Dollier Lake area (sheet 32G09-200-0202) where mafic volcanic rocks are overlaid by volcanic and sedimentary rocks of the Blondeau Formation (Daigneault, 1986; Roy et al., 2007). However, the low density of outcrops does not indicate the nature of contact at this location.

The Julien Lake strip, located in the Waconichi Syncline, extends from the north of La Trève Lake (sheet 32G14-200-0201) to the south of Eau Noire Lake (sheet 32J03-200-0102). To the north, a thick differentiated gabbro sill and the Moraine Syenite intrude into the contact between rocks of the Obatogamau and Bruneau formations. East of La Trève Lake, the Bruneau Formation’s sommital contact with sedimentary rocks of the La Trève Formation also corresponds to a thick differentiated sill. Southeast of Julien Lake, unconformable contact with sedimentary rocks of the La Trève Formation, which are much younger, is overprinted by a north-dipping reverse shear zone, whose trace is interpreted using aeromagnetic data and a few outcrops that indicate an increase in deformation intensity in the direction of contact. In the eastern part of sheet 32J03, contact between the Bruneau Formation and the Chebistuan Formation is interpreted as a discordance, but it was not observed due to a lack of outcrops.