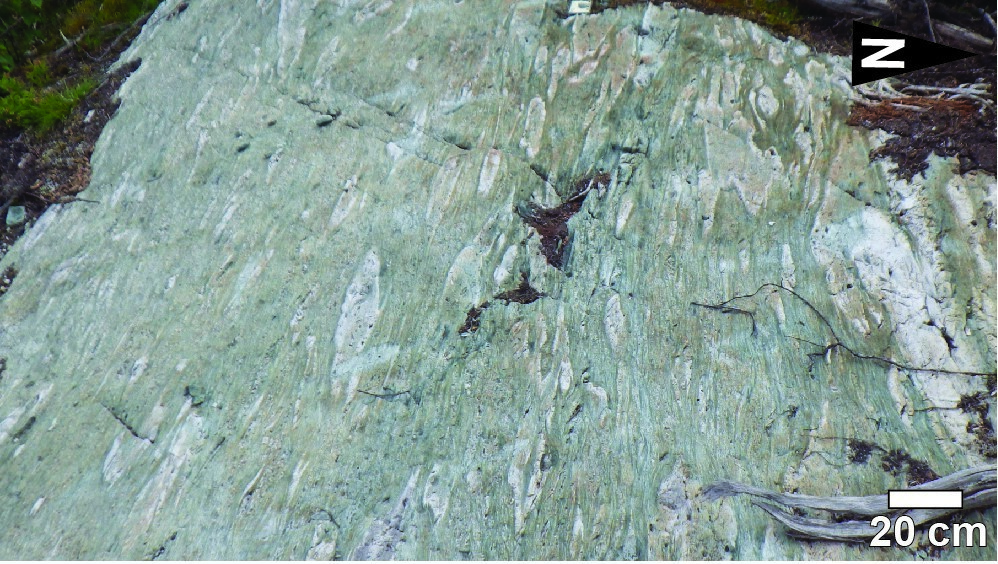 The felsic volcanic rocks outcropping north of Scott Lake (SE portion of sheet 32G15) were originally included by Daigneault and Allard (1990) in an informal unit of the Waconichi Formation, the “Lemoine type”, which is dominated by rhyolitic porphyries and rhyolite. Detailed work in the area (Brisson, 2007, 2008, 2009) allows for the characterization and the distinction of units in the Scott deposit area from those of the former Lemoine Mine. Leclerc et al. (2011) define the Scott Member to designate rocks previously assigned to the “Lemoine type” that are located north of Scott Lake.

The basal unit of the Scott Member consists of andesitic basalt and andesite of transitional to calc-alkaline affinity. These rocks form the dominant facies. Basalts are massive, pillowed or brecciated and exhibit a dark green colour. They are aphanitic or very fine grained and contain plagioclase and pyroxene phenocrystals (Jeffery, 1988). They have avariolitic textures (2-5%) locally, containing 1-2% amygdules of chlorite or carbonate (1-3 mm) and quartz (0.5-3 mm). The rock contains fine-grained disseminated pyrite. The pillowed morphology south of Williams Lake suggests a normal stratigraphic polarity to the north.

Economically speaking, this unit contains the Selco-Scott zinc deposit which has an evaluated tonnage (Scott deposit) described by Daigneault and Allard (1990, p.135): “In 1976, Selco drilled a first hole in Scott Township. This led to the discovery of a lens of 680 000 tonnes at 0.55% Cu, 6.9% Zn and 13.3 g/t Ag (UTM NAD83, zone 18: 525620 mE, 5522778 mN). The discovery followed an airborne survey that defined a discrete but important electromagnetic conductor. This stratiform lens is associated with mafic and felsic flows, pyroclastics, and a mass of quartz porphyry (Anderson and Downie, 1980). South of the lens, rocks are mainly mafic and highly chloritized; multiple phases from the Chibougamau Pluton, located less than 200 m to the south, can be recognized.” Moderate to severe alteration to chlorite, silica and epidote has been recognized in the Selco-Scott deposit environment (deposit number 2; Figure 2; Jeffery 1988; Brisson, 2007, 2008, 2009).

Rhyodacite and dacite of transitional to calc-alkaline affinity are greenish grey and aphanitic to very fine grained. These rocks locally contain plagioclase phenocrystals, up to 1% epidote amygdules, as well as traces of carbonate (amygdules <2 mm), quartz (1-5 mm) and pyrite (0.5-2 mm; Brisson, 2007). Pillows have a whitish core resulting from silicification. A rusty alteration is also common, indicating the presence of pyrite ± chalcopyrite in interstitial spaces at the cushion margin (Riverin, 1979). This unit is interbedded between the Gwillim and Scott shear zones. These volcanic rocks overlie porphyritic rhyolite of tholeiitic to transitional affinity. They correspond to a volcanic centre centred on a quartz-plagioclase porphyritic dome of tholeiitic to transitional affinity. 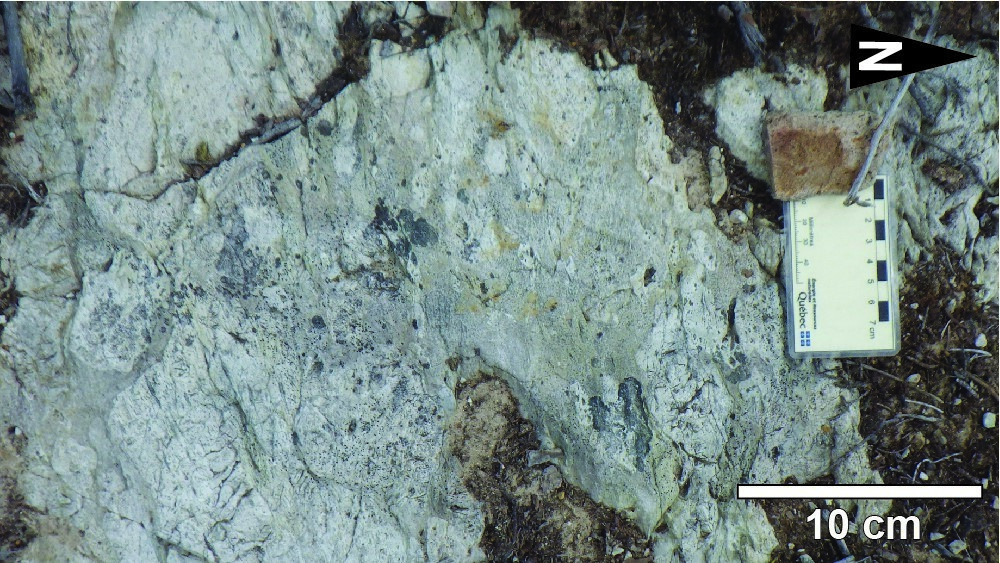 The Lac Williams Dacite was recognized in the northeastern portion of the area. This rock of tholeiitic to transitional affinity is dark green to brown in altered surface and has a weakly vitreous appearance in fresh exposure, suggesting silicification occurred (Riverin, 1979). This unit is <100 m thick.

Porphyritic rhyolite identified in the Selco-Scott deposit area (Jeffery, 1988) is distinguished from rhyolite of unit Asct3 by its flow-banding structure and tholeiitic to transitional affinity. It varies in colour from medium grey to greenish or yellowish depending on the intensity of chloritization and sericitization. The rock is aphanitic or fine grained, containing 0.5-3% quartz phenocrystals (0.5-2 mm in diameter; locally up to 14 mm) (Brisson, 2007, 2008, 2009).

The conductive unit that characterizes the top of the Scott Member corresponds to alternating medium-grey graphitic metasedimentary rocks, chert and exhalite characterized by a rusty alteration, suggesting the presence of disseminated sulphides (Jeffery, 1988). Exhalite consists of alternating chert and beds rich in chlorite, fine-grained pyrite (10%) and disseminated﻿ or laminated sphalerite (Brisson, 2007).

The base of the Scott Member is cut by an intrusion of quartz-rich granitoid from the granophyric zone (Lac Doré Intrusive Suite), as well as by diorite and tonalite of the Chibougamau Pluton. The summit of the Scott Member is limited by unit nAsct6, which is characterized by a positive linear magnetic anomaly. This unit is overlain by basalt and andesitic basalt of the Allard Member (Leclerc and Houle, 2013).