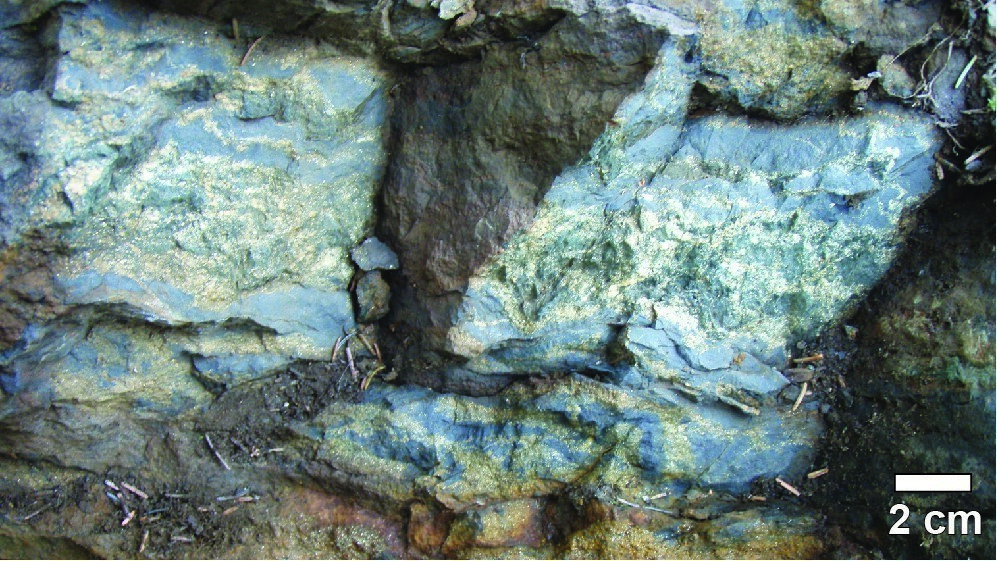 The Sauvage Lake iron formation as described by Henry and Allard (1979) corresponds to an Algoma-type iron formation based on the Gross classification (1996). Three facies are recognized: (a) carbonate facies, (b) oxide facies, and (c) sulphide facies. 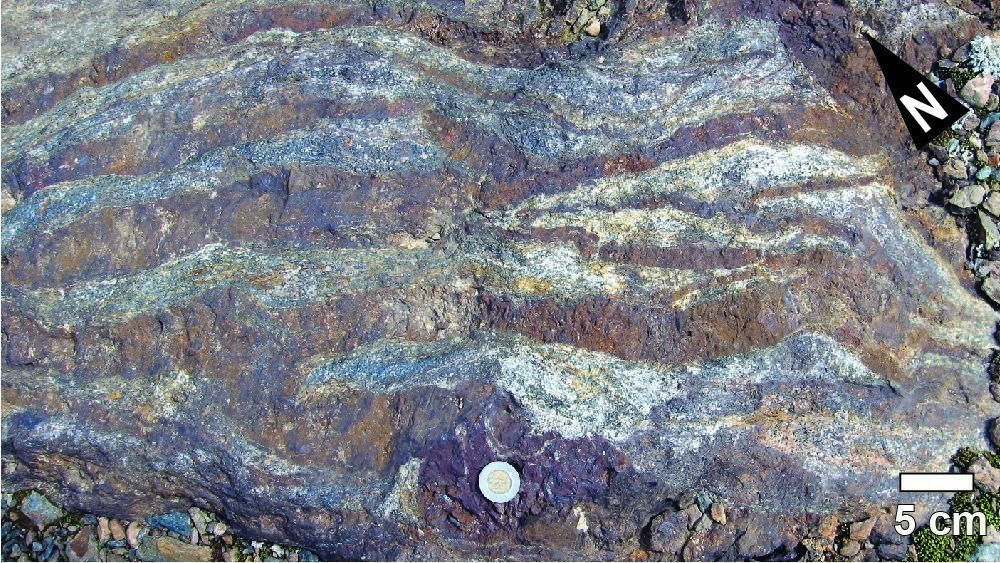 a) Carbonate Facies: This is the dominant facies, characterized by an ankerite-chlorite ± chloritoid schist containing pyrite layering. This rock is usually interbedded with a tuffaceous chert. This facies outcrops in the Sidérite Hill area, north of Surprenant Lake. 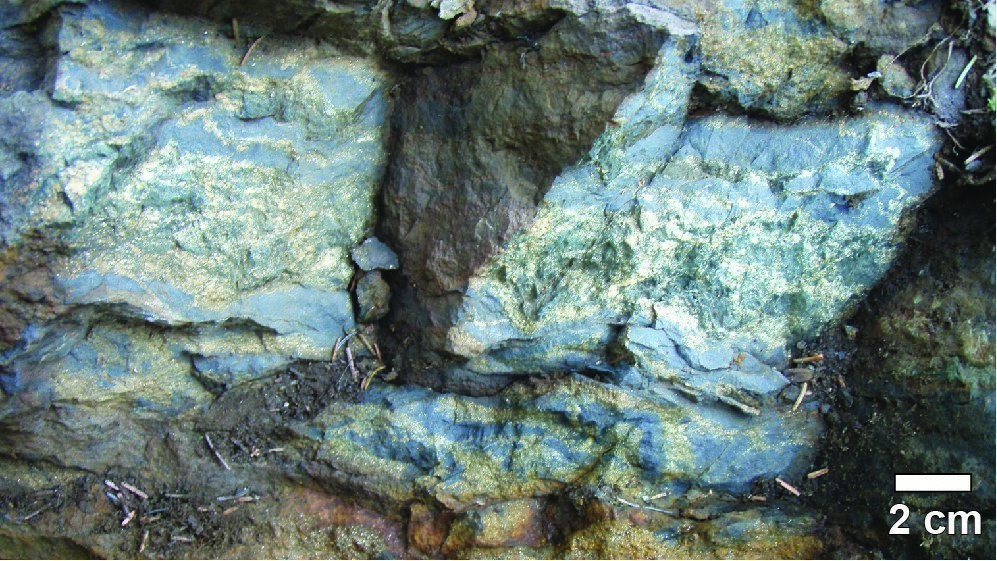 b) Oxide Facies: Recognized west of the Sidérite Hill and in the Portage Island area, it is characterized by a low-thickness (0.6 m) and discontinuous (up to 9 m lateral extension) magnetite iron formation (90-95% magnetite and 5-10% chert).

c) Sulphide Facies: This is the predominant facies in the Portage Island area. It consists of a dominant pyrite phase (pyrrhotite in the Mount Sorcier area) and an iron carbonate-chlorite-quartz-chloritoid assemblage. Traces of sphalerite and chalcopyrite are also present. 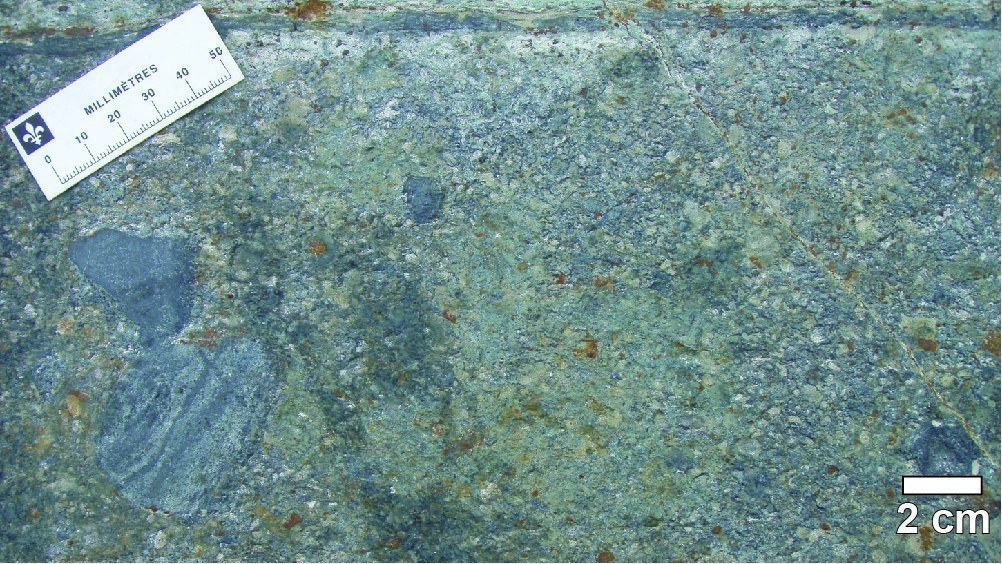 East of Alasper Lake, and south of the town of Chibougamau, the Sauvage Lake iron formation is interstratified with medium to coarse-lapilli tuff of intermediate to felsic composition. The matrix is composed of quartz and plagioclase phenocrystals. It contains millimetric to decimetric fragments of mafic volcanic rock and iron formation (oxide facies).

Leclerc et al. (2008) provide a description of Westminer Canada’s early 1990s reference stripping on Portage Island: “Stripping is located on the north side of a small anticline that locally shifts the polarities to the north. The southern portion of the stripping, which forms the base of the section, is characterized by a coarse-grained lapilli tuff, foliated with a pyritic matrix. Sericitized beige lapillis suggest an intermediate composition. Lapilli tuff is overlaid by a pyritic chert unit. Chloritized and sericitized mafic lava with millimetre pyrite layers occupy the northern portion of the stripping. Approximately 30 m to the SW, a banded iron formation with magnetite (55%), chlorite (30%), pyrite (15%) and traces of chalcopyrite, is hosted in a zone of foliated, magnetic and highly chloritized mafic lavas. E-W-oriented foliation and isoclinal folds are associated with regional deformation and cut by open folds and N-S oriented shear zones (fragile-ductile).”

The rocks of the Portage Member form lenses that are <70 m thick and have a maximum lateral extension of 2.4 km. They appear within the Lac Sauvage Shear Zone, between the southern Sauvage Lake area and Portage Island (northern portion of NTS sheet 32G16).

The Portage Island stripping described in the “reference section” indicates that iron formations are hosted in “a zone of foliated, magnetic and highly chloritized mafic lava” attributed to the David Member (upper part of the Obatogamau Formation) north of Chibougamau Lake.