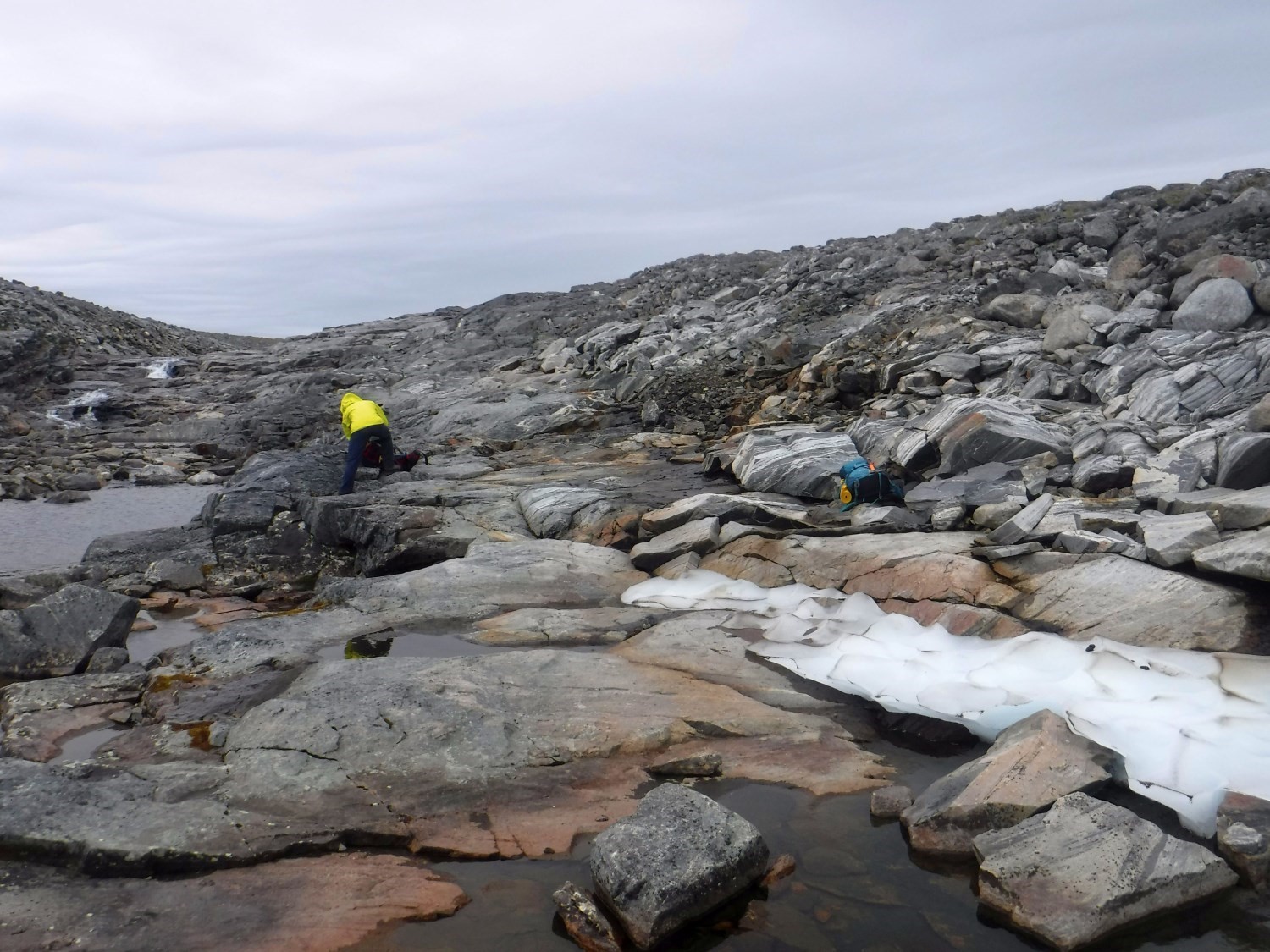 Hoffman (1985) conceptualized a tectonic model for the Ungava Orogen. This included a suture at the southern boundary of the Sugluk Terrane (Narsajuaq Lithotectonic Domain), which would be composed of gneiss sheared by a southward overthrusting movement. Following geological survey, Charrette and Beaudette (2018) renamed this structure the Sugluk Shear Zone. This record combines field observations made during a geological mapping campaign in the summer of 2019 (Vanier and Lafrance, 2020) with aeromagnetic images to better constrain the location of the shear zone.

The Sugluk Shear Zone (ZCsug) is a major structure of the Ungava Orogen as it marks the boundary between the Narsajuaq and Kovik lithotectonic domains. The shear zone is nearly two kilometres thick and contains generally metric to decametric strips of sheared mylonite and gneiss. Its lateral extension is limited to the area mapped in 2019 (Vanier and Lafrance, 2020), but continues west and east for a total length of ~160 km. Of general WSW-ENE orientation, it describes a series of undulations with an amplitude of a few tens of kilometres. This undulation pattern has a moderate penetration within the Narsajuaq Domain.

A variety of lithstratigraphic units, both of igneous and sedimentary origin, are affected by the ZCsug. These are mainly the Fargues, Crony, Gastrin and Suluraaq suites, as well as the Sainte-Hélène et de Pingasualuit complexes. It should be noted that the ZCsug straddles the Narsajuaq and Kovik domains, affecting both of them. 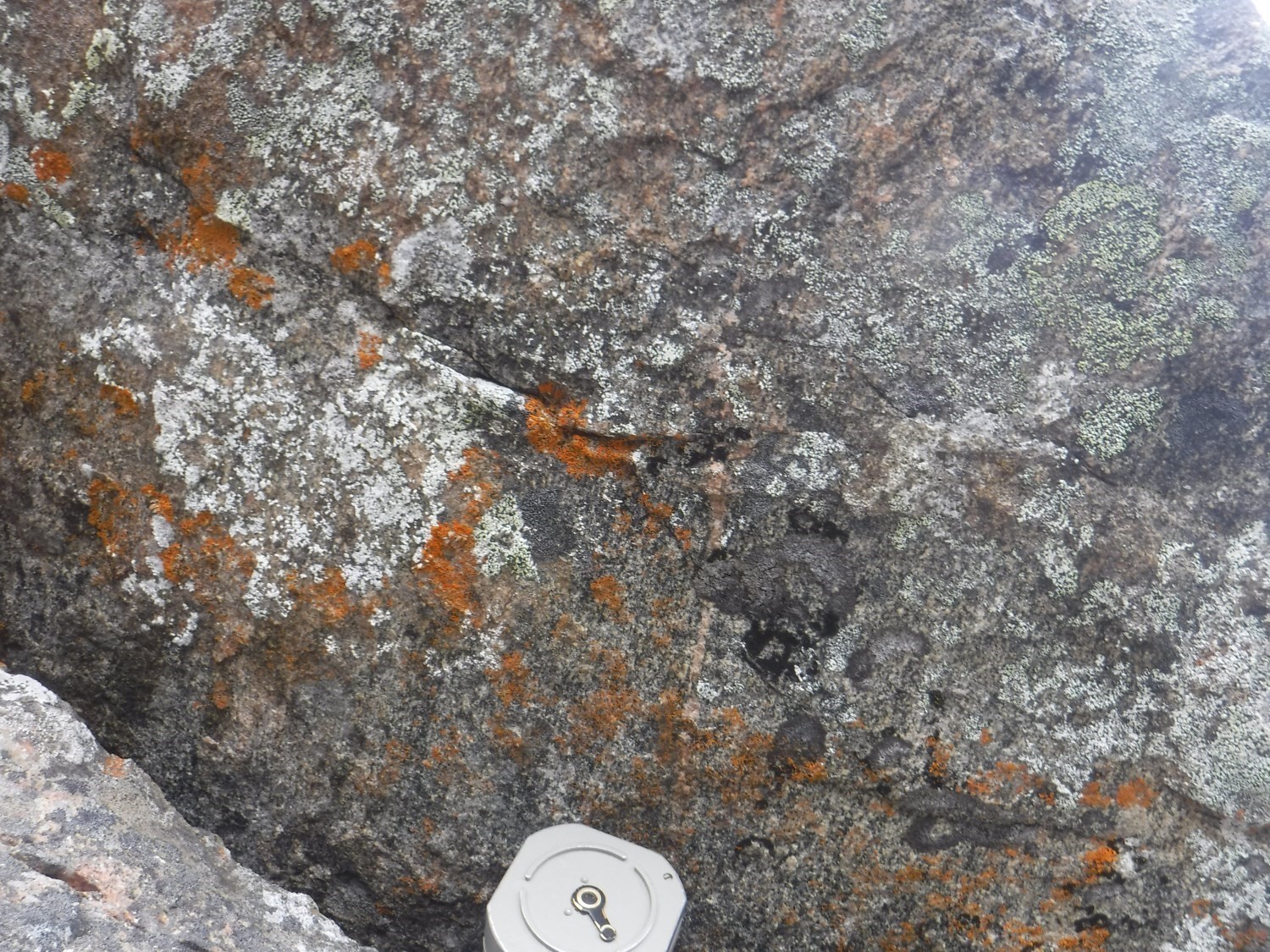 The dominant fabric is a penetrative and regular tectometamorphic or mylonitic foliation. In gneissic lithologies, it is similar to gneissosity. The general attitude of this fabric is 245°/44°. A variability observed in the orientation is due to regional undulations in the shear zone. Planar fabrics generally contain a mineral or stretch lineation, most commonly expressed by the stretching of quartz and feldspar or by elongated clusters of ferromagnesian minerals. Linear structures are offset about 20° westward from the slope line. 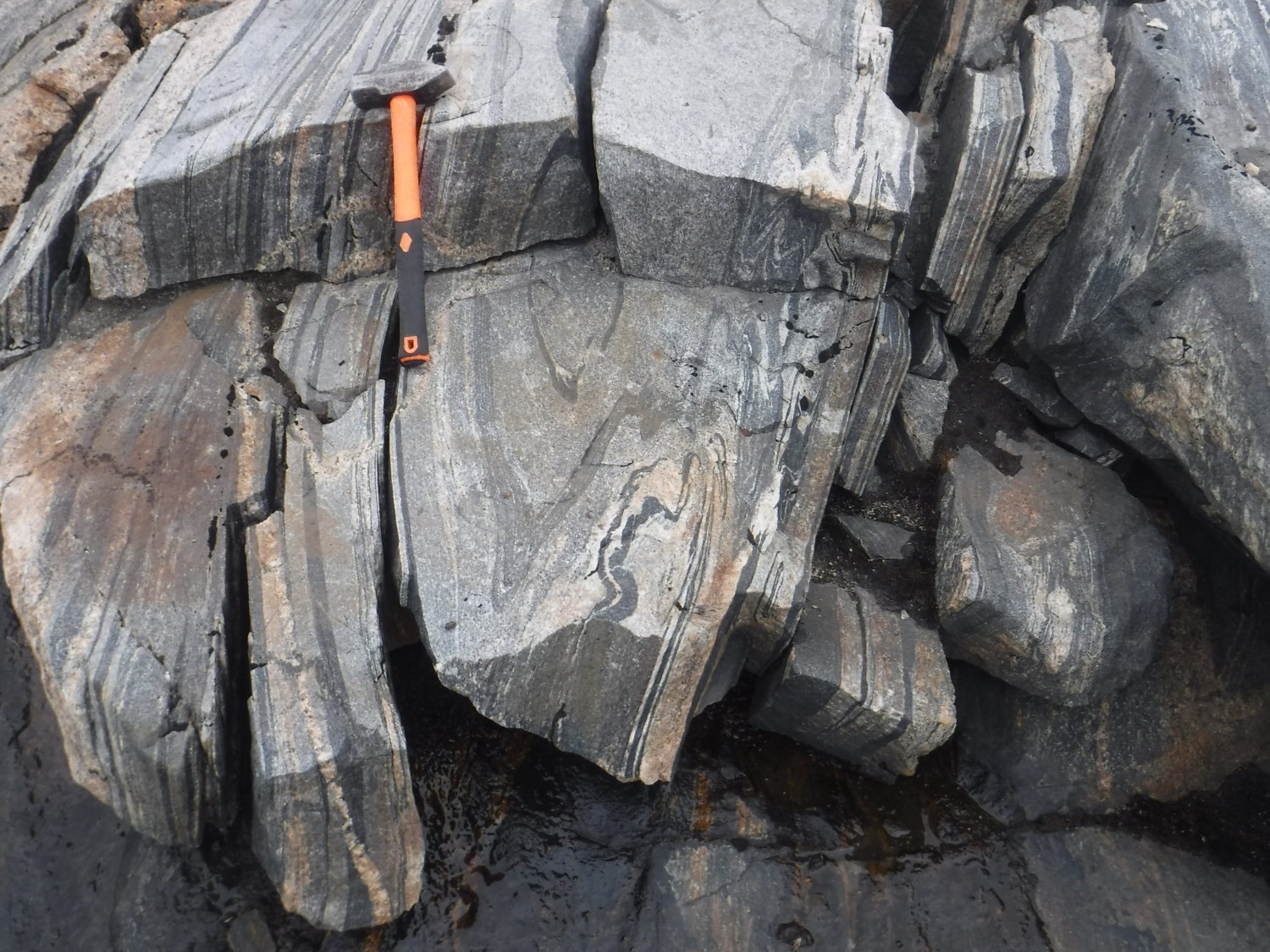 The ZCsug has a heterogeneous intensity and deformation style. Indeed, an outcrop exposes a subvertical shear zone accompanied by sheath folds. Stretch lineations measured in these mylonites have a high variability, changing from subvertical to subhorizontal. It is possible that the formation of complex fabrics (e.g. sheath folds) is the product of the progressive accumulation of deformation that can locally form this type of structure, without a deformation phase additional to that identified regionally being involved (Fossen et al., 2019). 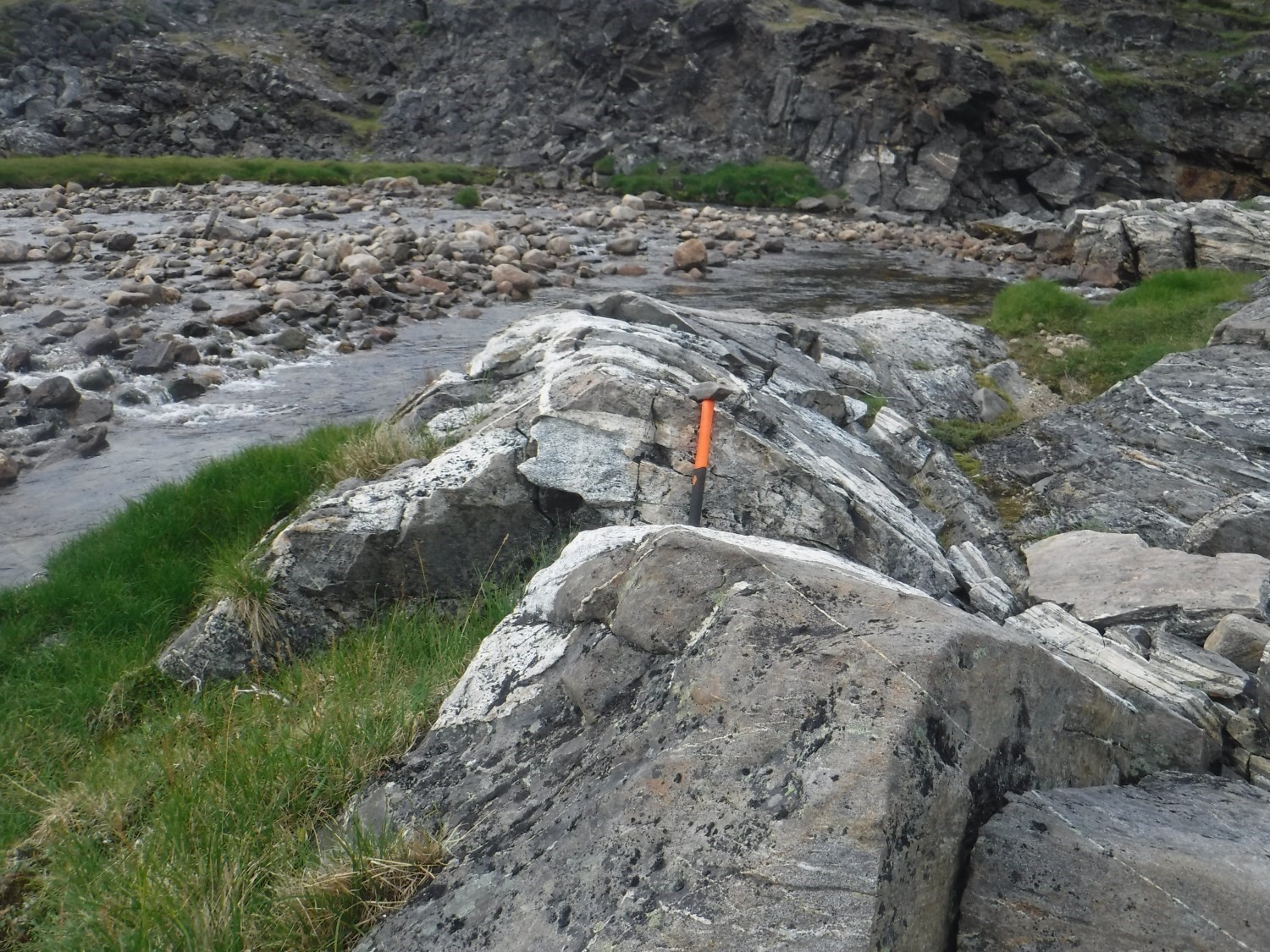 Folds are locally present in the ZCsug. There are sheath folds, and folds overturned towards the SE, indicating a reverse movement. These are tight to open and their amplitude varies from metric to decametric. Sheath folds are restricted to rare zones where foliation is subvertical, whereas open overfolds are more common. 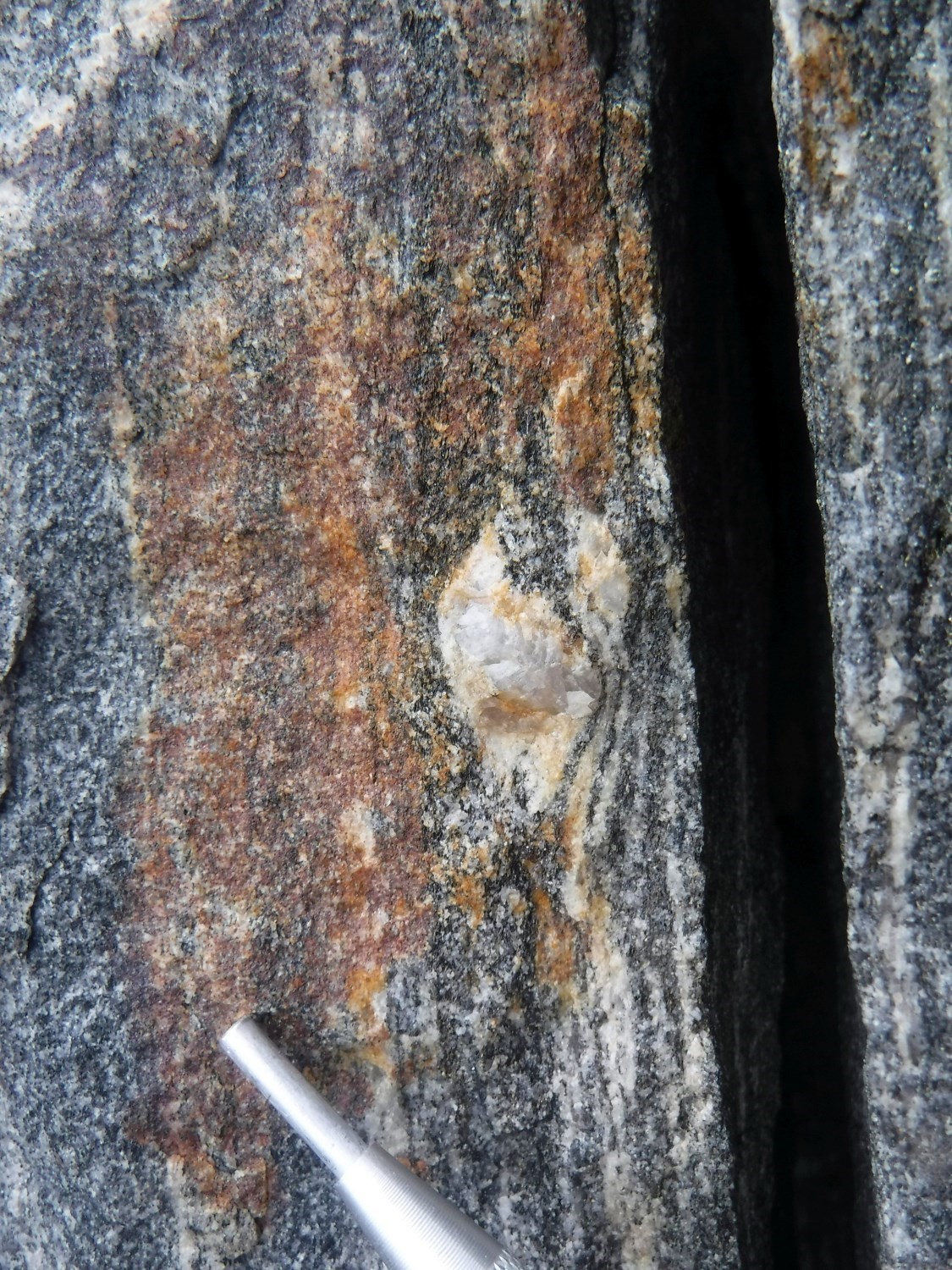 Kinematic indicators observed in the ZCsug are sigma-type porphyroclasts and an overfold. The latter indicate overthrusting movement towards the SSE with a dextral strike-slip component. In more intensely deformed zones mentioned above, kinematics become more complex and probably reflect local disturbances due to the accumulation of shear deformation. Moreover, in these cases, stretch lineation does not necessarily indicate the direction of transport (Fossen and Cavalcante, 2017).

As a whole, the ZCsug consists of rocks that have undergone intense deformation, mainly marked by elongated quartz lenses and porphyroclastic feldspar. Within mylonite strips, porpyroclastic textures and grain size reduction are predominant, while less deformed areas are characterized by regular gneissosity. The continuity of planar structures along the interface between the Narsajuaq and Kovik lithotectonic domains indicates that the structural style is of the parallel type. This is a ductile shear zone whose main movement corresponds to overthrusting of the Narsajuaq Domain on the Kovik Domain. It differs from the surrounding structural domains mainly by the higher intensity of the deformation. The observation of sheath folds and close variations in the orientation of planar and linear structures within more deformed zones also indicates the presence of zones of progressive accumulation of complex deformation deviating from plane deformation and simple shear. This makes the structural and kinematic analysis of these zones more complex.

A limited number of five thin sections have been described in the ZCsug. Four of these come from intermediate to mafic rocks of the Gastrin Suite and the other is an anatectic granite present in migmatized metasedimentary rocks of the Crony Suite. In these samples, feldspar forms lenticular clusters; some grains are coarser and share interlobed boundaries with finer grains. Biotite and hornblende occur in elongated clusters marking foliation. When visible, quartz is lenticular or in interlobed to amoeboid zones having undulatory and subgrain extinctions. Overall, this type of texture indicates recrystallization by subgrain rotation of feldspar having core and mantle textures (Guillope and Poirier, 1979; Hirth and Tullis, 1992), while amoeboid quartz grains suggest recrystallization by grain edge migration (Passchier and Trouw; 2005). These dynamic recrystallization mechanisms occur at temperatures >500°C (Kruhl, 1998; Stipp et al., 2002; Passchier and Trouw; 2005). Thus, the metamorphic facies during deformation corresponds minimally to that of amphibolites.

However, a limited number of observations were made in comparison with the Sources Structural Domain (DSsou), where granulite facies conditions are well supported. Given the identical kinematics and proximity between the ZCsug and the DSsou, it is likely that the metamorphic facies during deformation was similar, i.e. the granulite facies. There is no conclusive evidence that the deformation continued significantly under conditions below the amphibolite facies. It is also possible that the intensity of metamorphism was lower in the area located in the Kovik Lithotectonic Domain of the ZCsug. Finally, it should be noted that samples described above come from this zone.

On the aeromagnetic map, the ZCsug marks the southern boundary of important positive anomalies caused by the Fargues Suite and Pingasualuit Complex, both belonging to the Narsajuaq Lithotectonic Domain. The shear zone is characterized by a weak anomaly at the interface between the Narsajuaq and Kovik lithotectonic domains.

A sample of mobilisate derived from melting of paragneiss was sampled in the Sugluk Shear Zone to provide a maximum shear age. This mobilisate shows a syn-kinematic character. Quartz is generally lenticular and feldspar is commonly porphyroclastic. However, some areas appeared to be free of deformation, indicating a late emplacement with respect to deformation.