The Crony Suite was introduced by Vanier and Lafrance (2020) in the Sirmiq Lake area to group migmatized paragneiss and diatexite units derived from melting of these paragneisses of the Kovik Lithotectonic Domain. It includes subunits ApPkvk3a and ApPkvk3b formerly assigned to the Kovik Complex by Charette and Beaudette (2018) in the Cape Wolstenholme area. 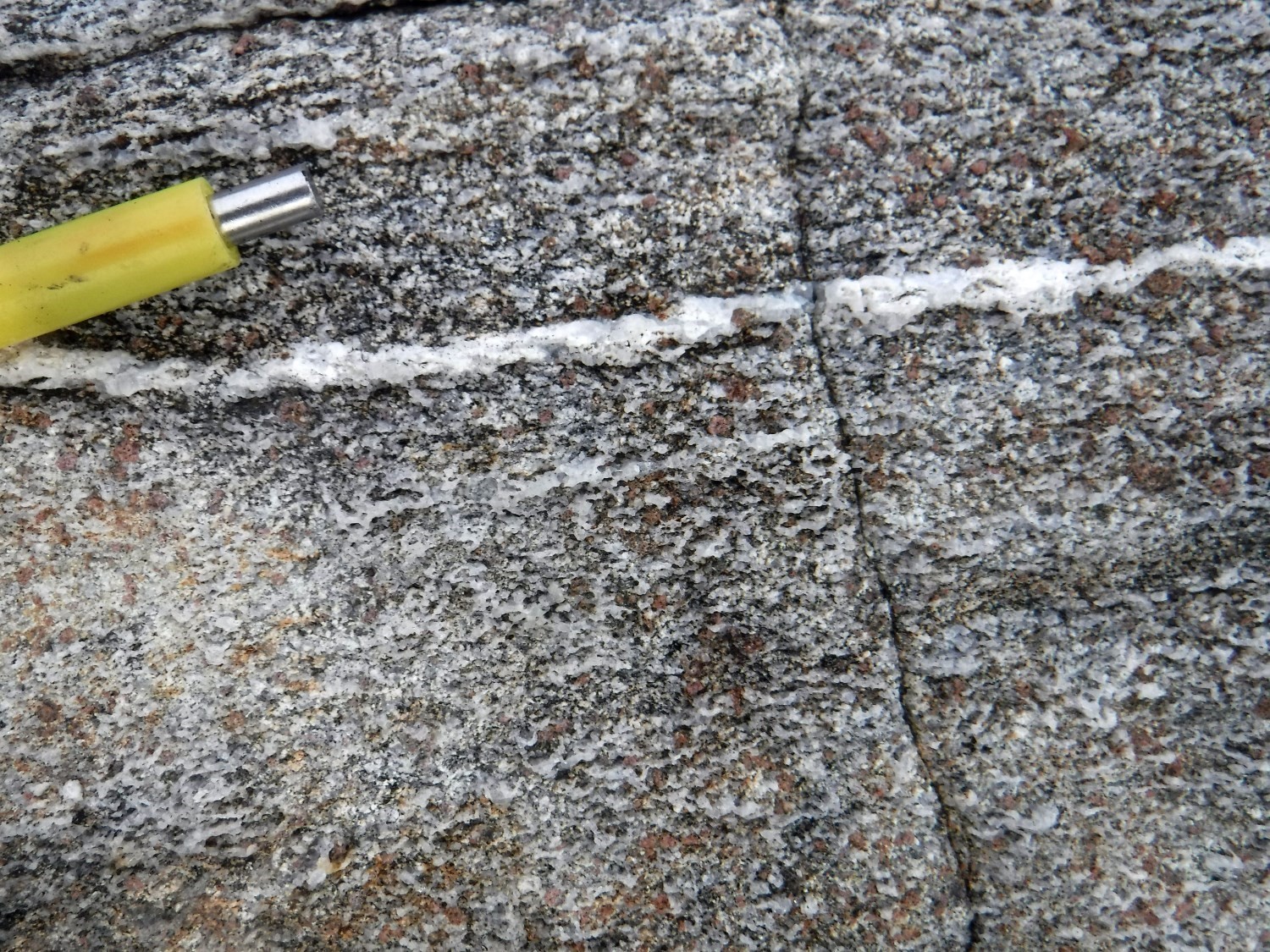 Migmatized paragneiss is medium to fine grained, grey in fresh exposure and beige grey to brownish or rusty in altered patina. Compositional banding is observed on some outcrops. It is caused by a variation in the content of quartz (15-30%), K-feldspar (0-15%) and ferromagnesian minerals (5-35%), the latter being mainly biotite and garnet. This banding is accentuated by a small amount of leucosome as clusters and discontinuous bands. 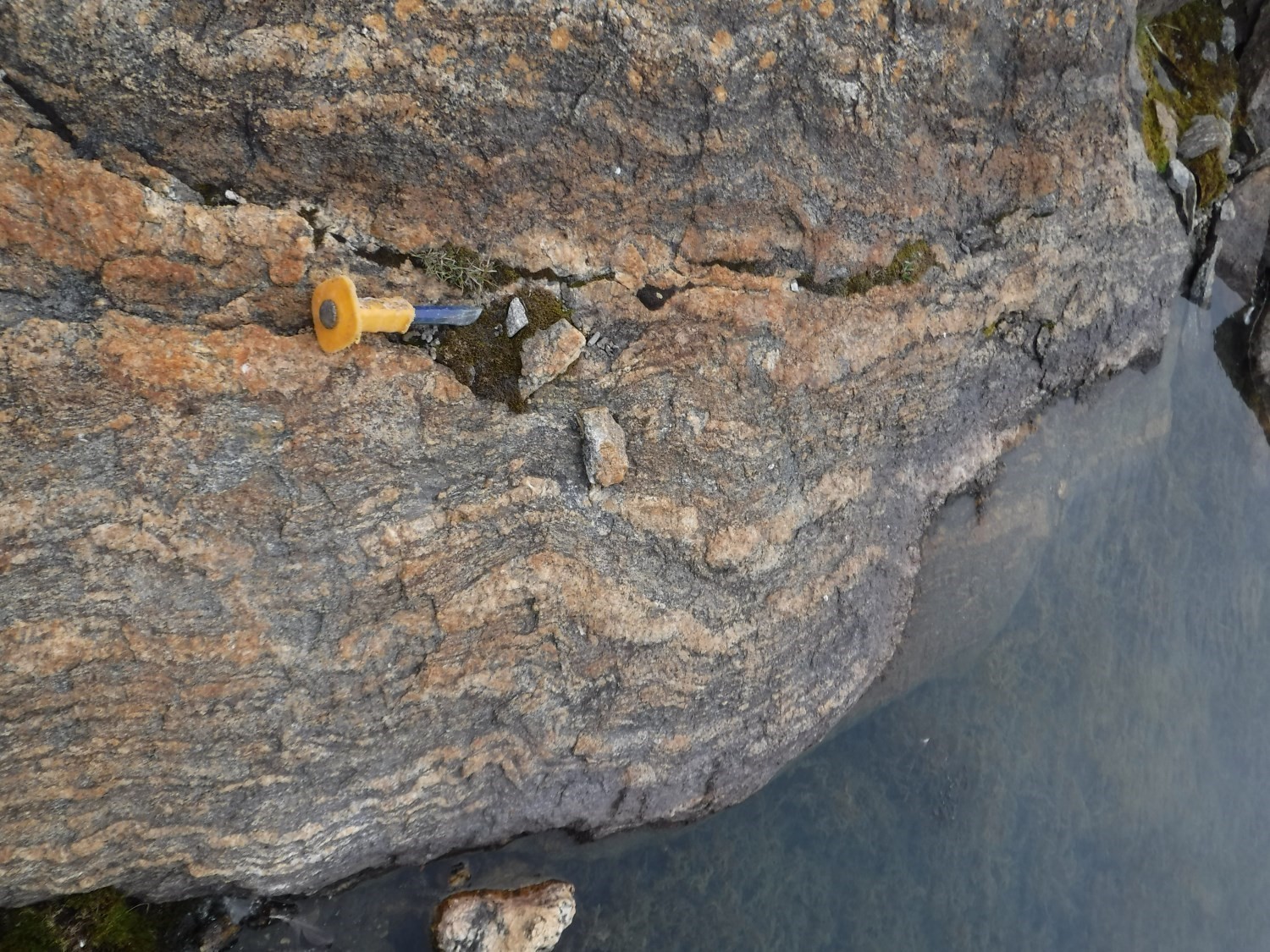 In several places, the partial melting rate was higher and migmatitic banding produced a stromatic texture. The leucosome (10-30%) then forms millimetric to centimetric medium-grained whitish bands, parallel to foliation and locally folded. The composition of this leucosome varies from granitic to tonalitic. It is lined by biotite and contains 2-25% pink or lilac garnet. Metatexite contains less migmatized paragneiss layers, decimetric diatexite layers and, in places, centimetric to metric gabbroic layers commonly boudinaged. This unit displays deformation of varying intensity. Generally, paragneiss are crenulated and in places display a mylonitic texture. Mylonitisation produces discontinuous boudinaged leucosomes and plagioclase or K-feldspar porphyroclasts.

In thin section, the rock has an heterogranular interlobed to partially granoblastic texture. Coarse clusters of amoeboid quartz are also observed, generally elongated and forming discontinuous bands in foliation. Plagioclase is sericitized in places and myrmekites are visible. If present, microcline tends to concentrate in the leucosome. Paragneiss and metatexite commonly contain red biotite, garnet, sillimanite, muscovite and graphite. Garnet is locally rimmed by plagioclase. Accessory minerals are, in order of importance, epidote, muscovite (in flakes associated with plagioclase sericitization), chlorite (retrograde on biotite and garnet), apatite, graphite, allanite, hornblende and zircon (as inclusions in biotite).

In the east-central part of sheet 35K01, an E-W strip a few kilometres wide assigned to unit ApPcry1 differs from the rest of the unit by the presence of small crystals of clinopyroxene (<5%) or hornblende (<3%). 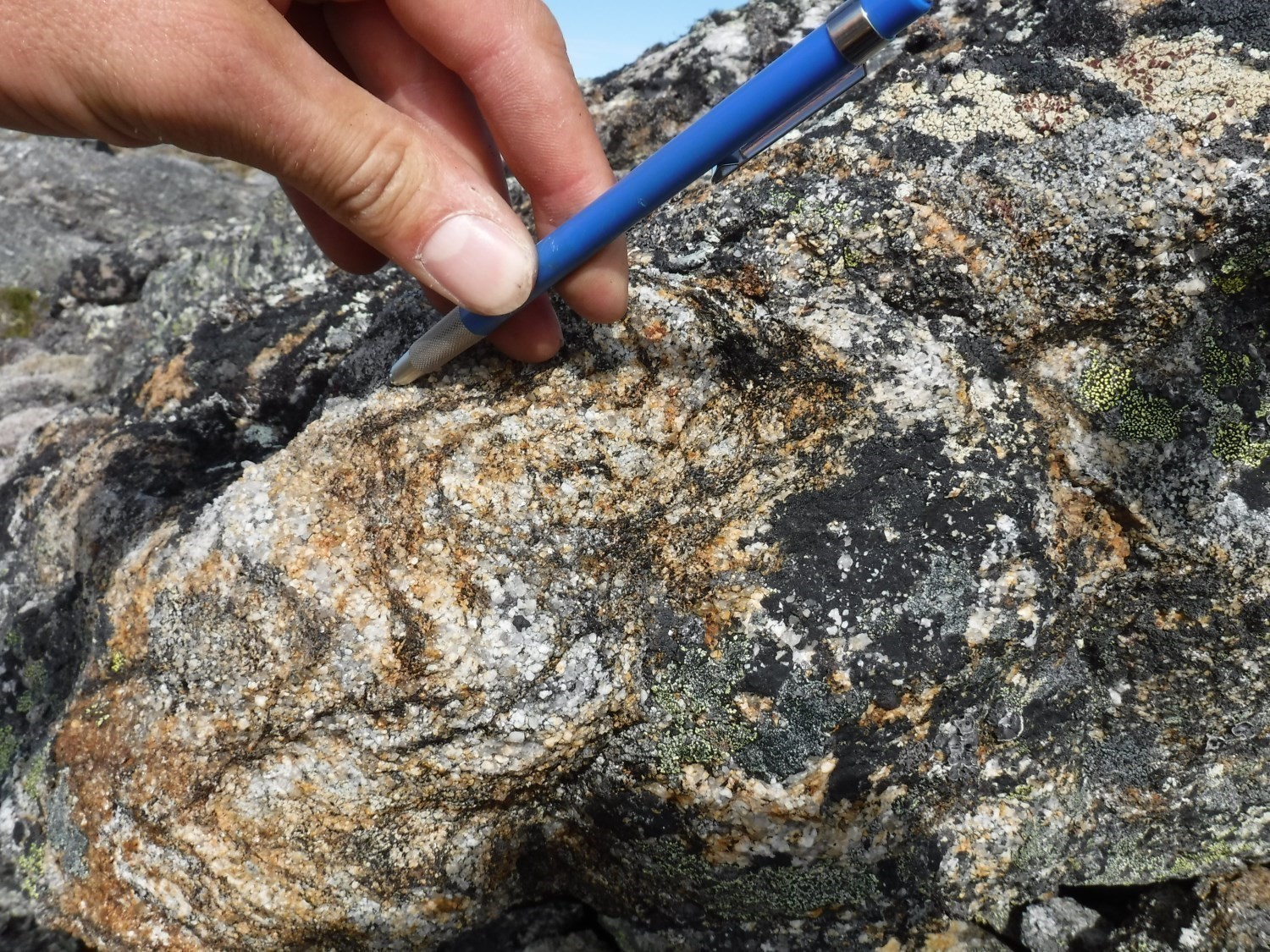 Schlieren diatexite resulting from partial melting of unit ApPcry1 paragneiss is heterogeneous and contains decimetric to metric layers and rafts of lightly migmatized paragneiss and metatexite. This rock is whitish and heteroganular. Heterogeneity is produced by the distribution of ferromagnesian minerals in numerous schlierens and millimetric clusters, as well as by the presence of bands, zones or injections of white leucocratic material resembling anatectic granite. The latter locally makes up to 25% of outcrops. 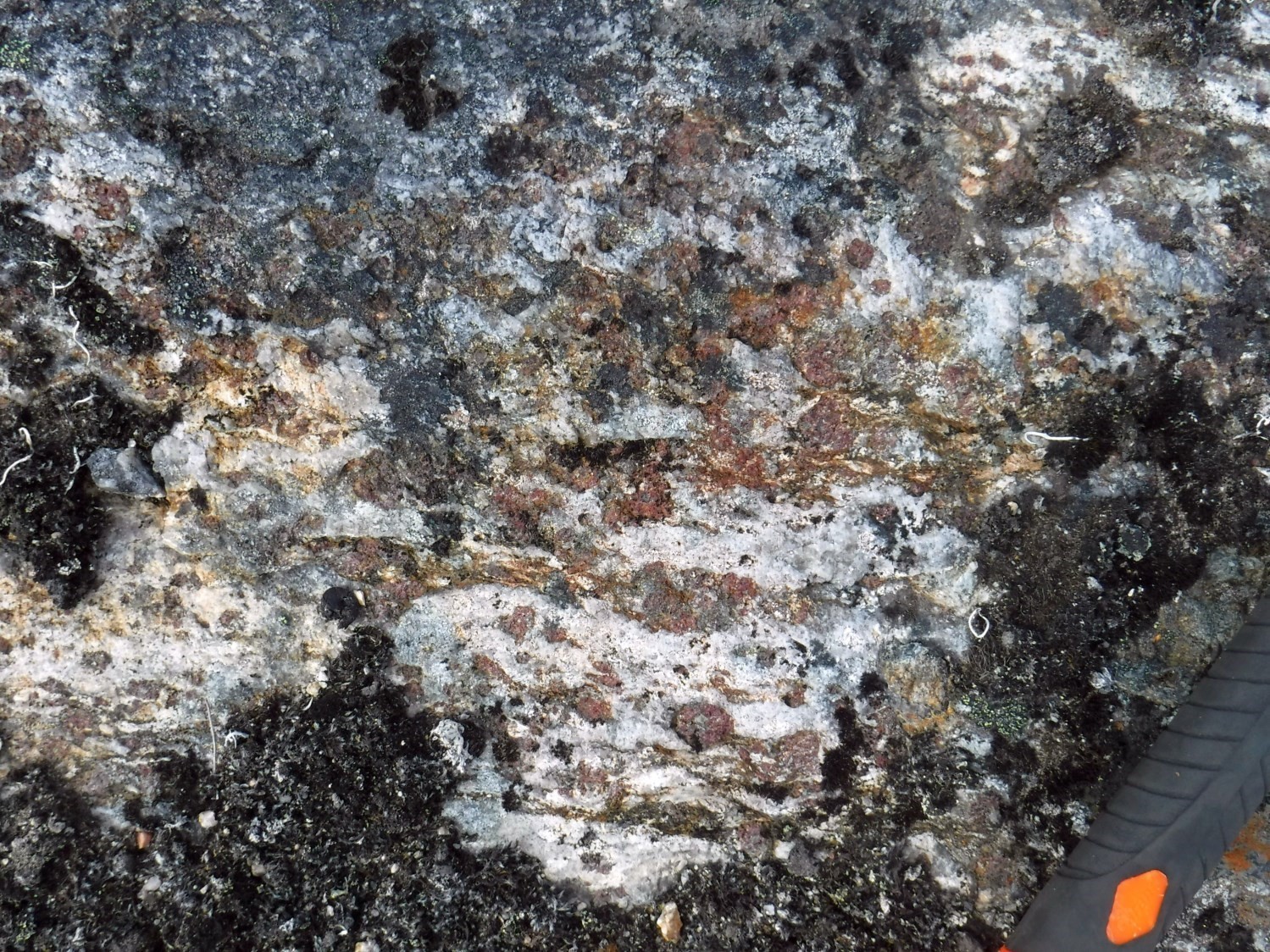 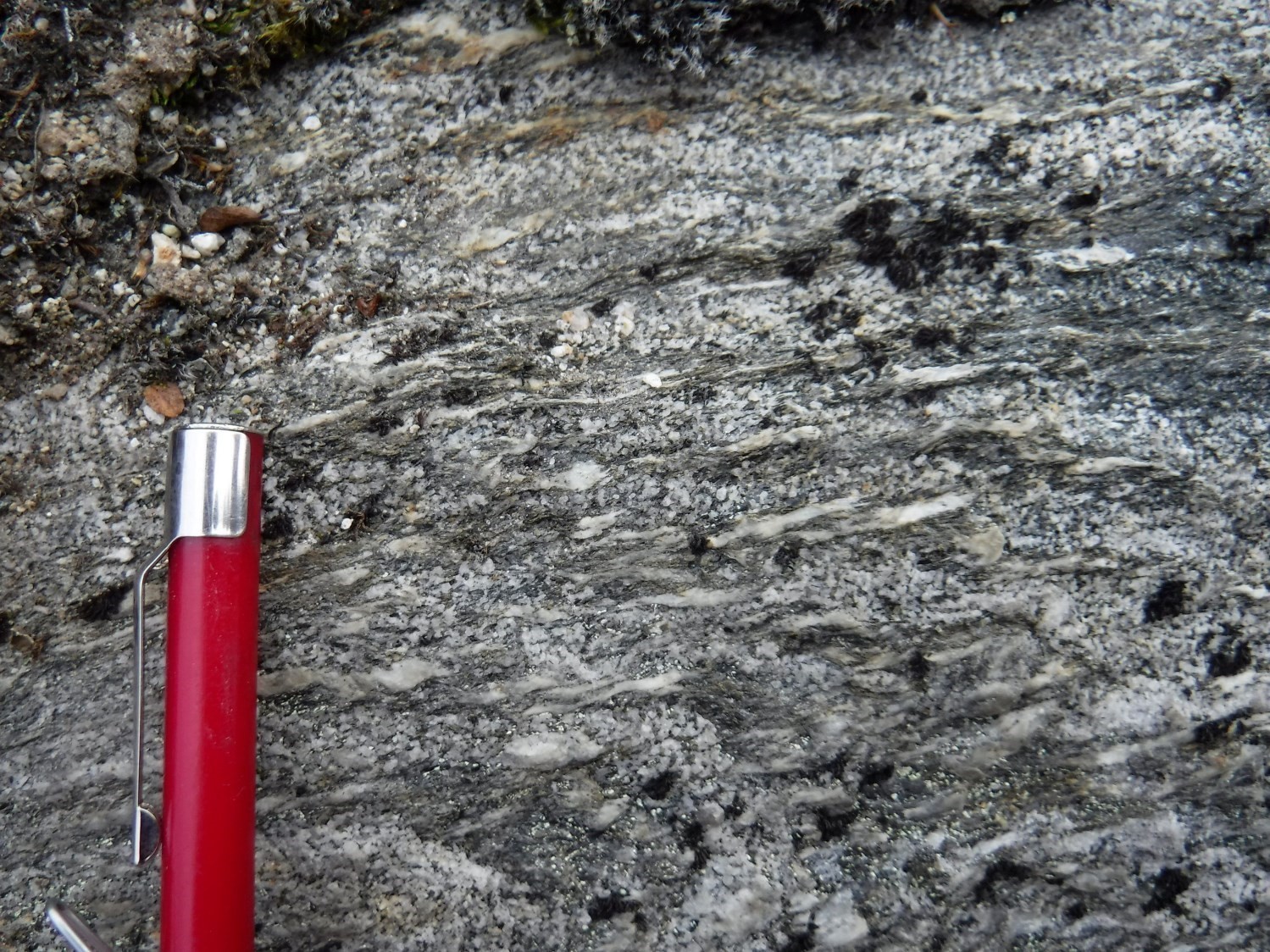 Diatexite is in places affected by folding or crenulation. Garnet forms porphyroblasts 0.5 ﻿cm to 2 cm in diameter. Sillimanite can account for up to 25% of the mineral phases and is concentrated in flexuous lenticular nodules stretched in foliation. In thin sections, quartz and feldspar form even-grained and interlobed grain clusters. Garnet contains some biotite and quartz inclusions, while sillimanite is fibrous and prismatic. Opaque minerals are sparse.

Contacts between the Crony Suite and the Nanuk Complex and Arviq Suite have been tectonized. The Crony Suite is, however, cut by granite of the Nunatak Suite. A beige to white granitic phase assigned to the latter resembles the leucosome observed in the Crony Suite.