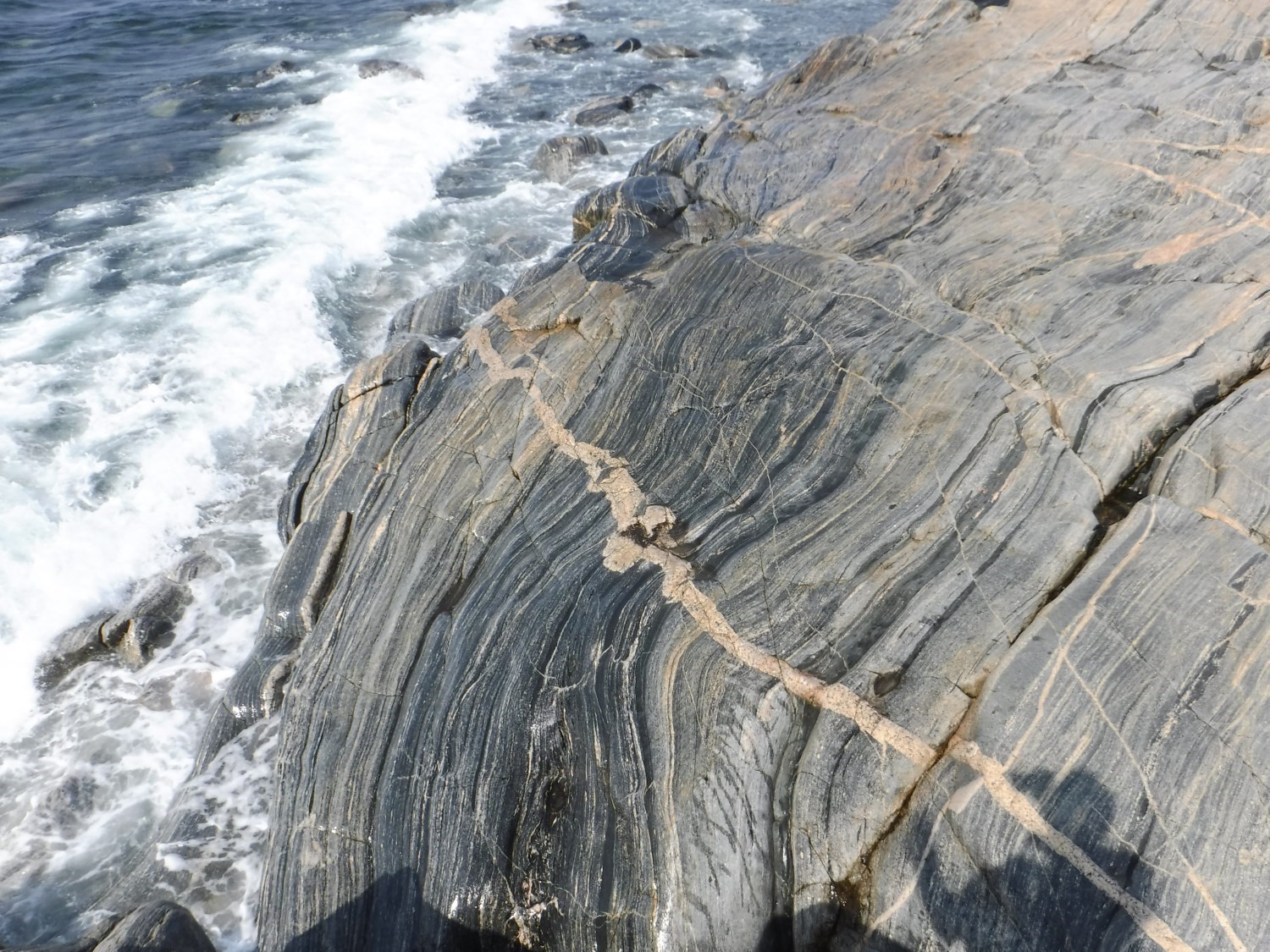 The Sainte-Hélène Complex was introduced by Charette and Beaudette (2018) to distinguish gneissic and migmatitic, orthopyroxene-free tonalite to diorite lithologies of the Narsajuaq Lithotectonic Domain. It was recently extended eastward in the Sirmiq Lake area (Vanier and Lafrance, 2020). Previously, these lithologies were mostly included in unit pPNAR1 of the older suite and, in a smaller proportion, in unit pPNAR2 of the younger suite described by St-Onge and Lucas (1992) and St-Onge et al. (1992).

Based on geochronological data, the units formerly grouped in the Sainte-Hélène Complex by Charette and Beaudette (2018) and located north of the Naujat Shear Zone were reassigned to the Uummanaq Suite (Vanier and Lafrance, 2020).

The name of the unit refers to Pointe de Sainte-Hélène (NTS sheet 35L01).

The Sainte-Hélène Complex groups foliated to gneissic rocks metamorphosed at the amphibolite facies located north of the Sugluk Shear Zone, whose composition varies from tonalitic to dioritic. In addition to the compositional variations that mark gneissosity within this complex, many injections and bands conformable with foliation produce a banded appearance. Locally, isoclinal folds with an axis parallel to the foliation affect the gneissosity and felsic bands. Open folds of metric amplitude, folding the entire banded gneissic sequence, were also observed, particularly near the coast SW of Ivujivik.

The two main lithologies in this group were divided according to the dominant composition observed in outcrop, namely, migmatized quartz diorite (pPshn1) and migmatized tonalite (pPshn2). These two units are commonly observed in transitional contact or as imbricate layers. The diatexite unit (Ashn3) is interpreted by Charette and Beaudette (2018) as resulting from melting of quartz diorite and tonalite since diatexite forms zones within the latter. Finally, unit Ashn4 consists of quartz diorite and quartz monzodiorite. 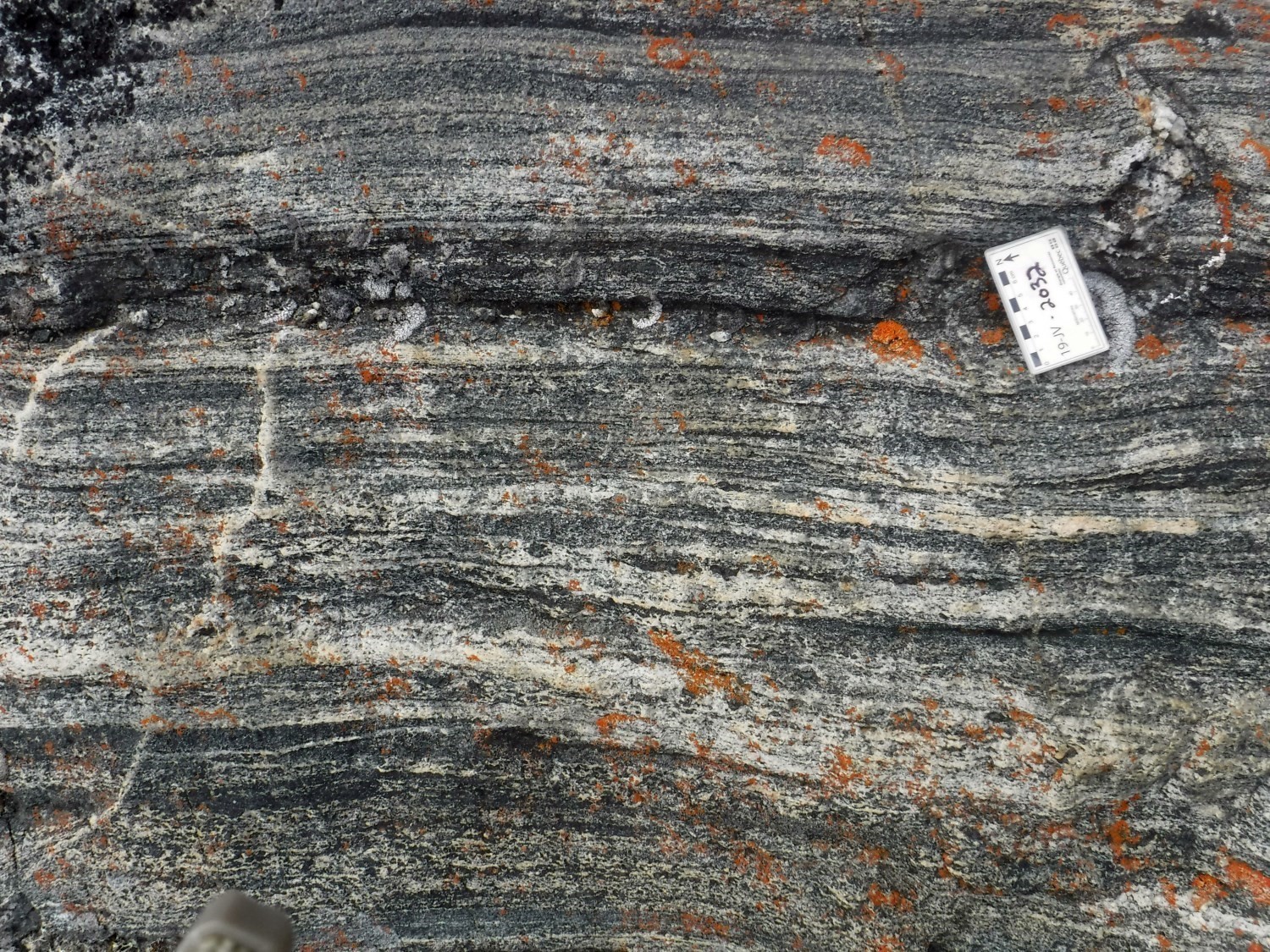 Quartz diorite is dark grey, foliated, fine to medium grained and gneissic. Gneissosity is produced by a transitional or sharp variation in the amount of ferromagnesian minerals (15-30%) and quartz (5-17%). Thus, there is alternating centimetric to decimetric bands and layers of dark-grey hornblende-biotite diorite, grey biotite ± hornblende quartz diorite and light-grey biotite quartz diorite. In some parts of the Cape Wolstenholme area (Charette and Beaudette, 2018), quartz diorite displays little compositional variation (non-gneissic), but commonly includes diffuse and lenticular leucosomes as well as small (0.5-1 cm) plagioclase crystals. Quartz diorite has characteristic banding marked by two types of bands. 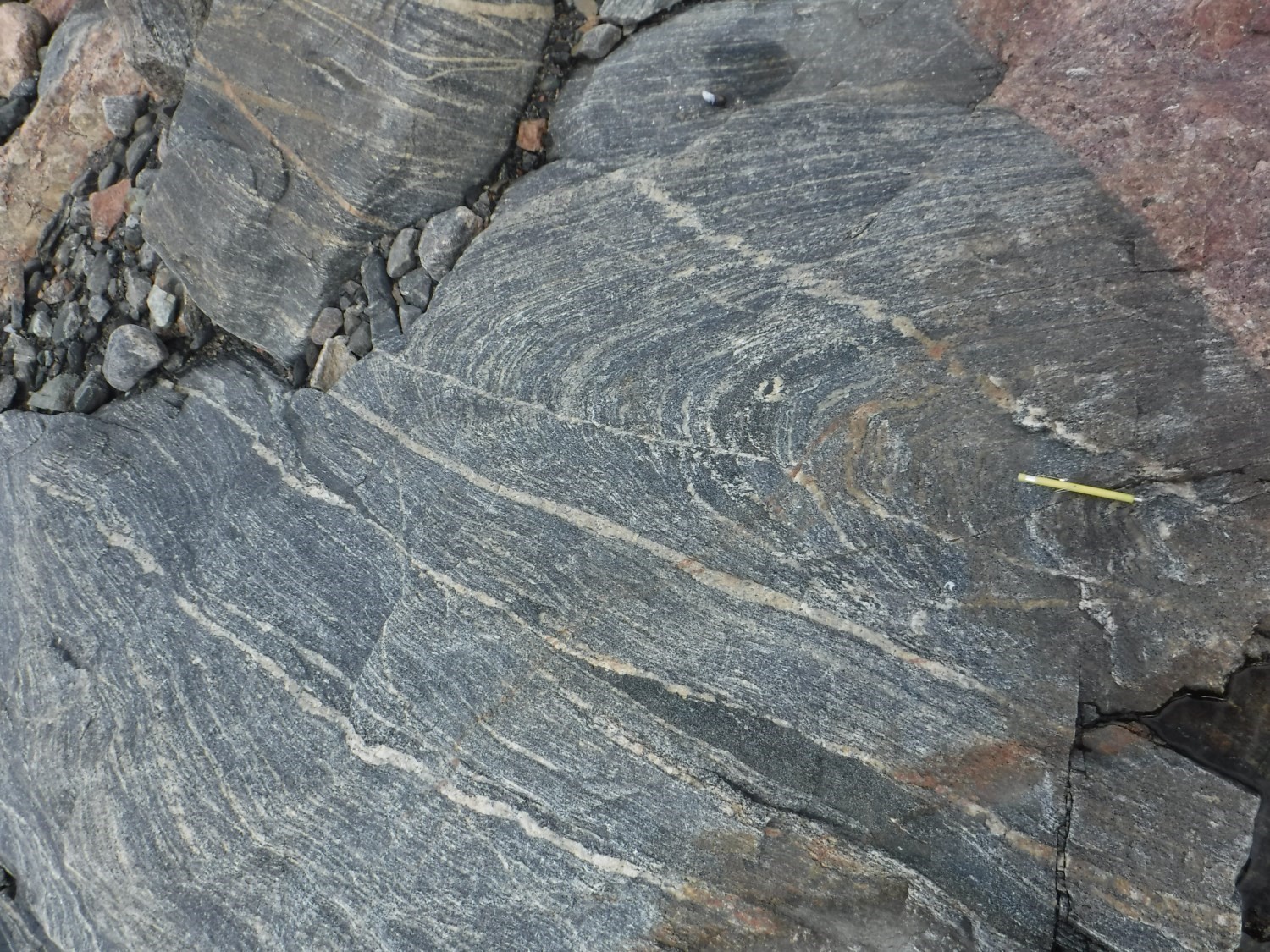 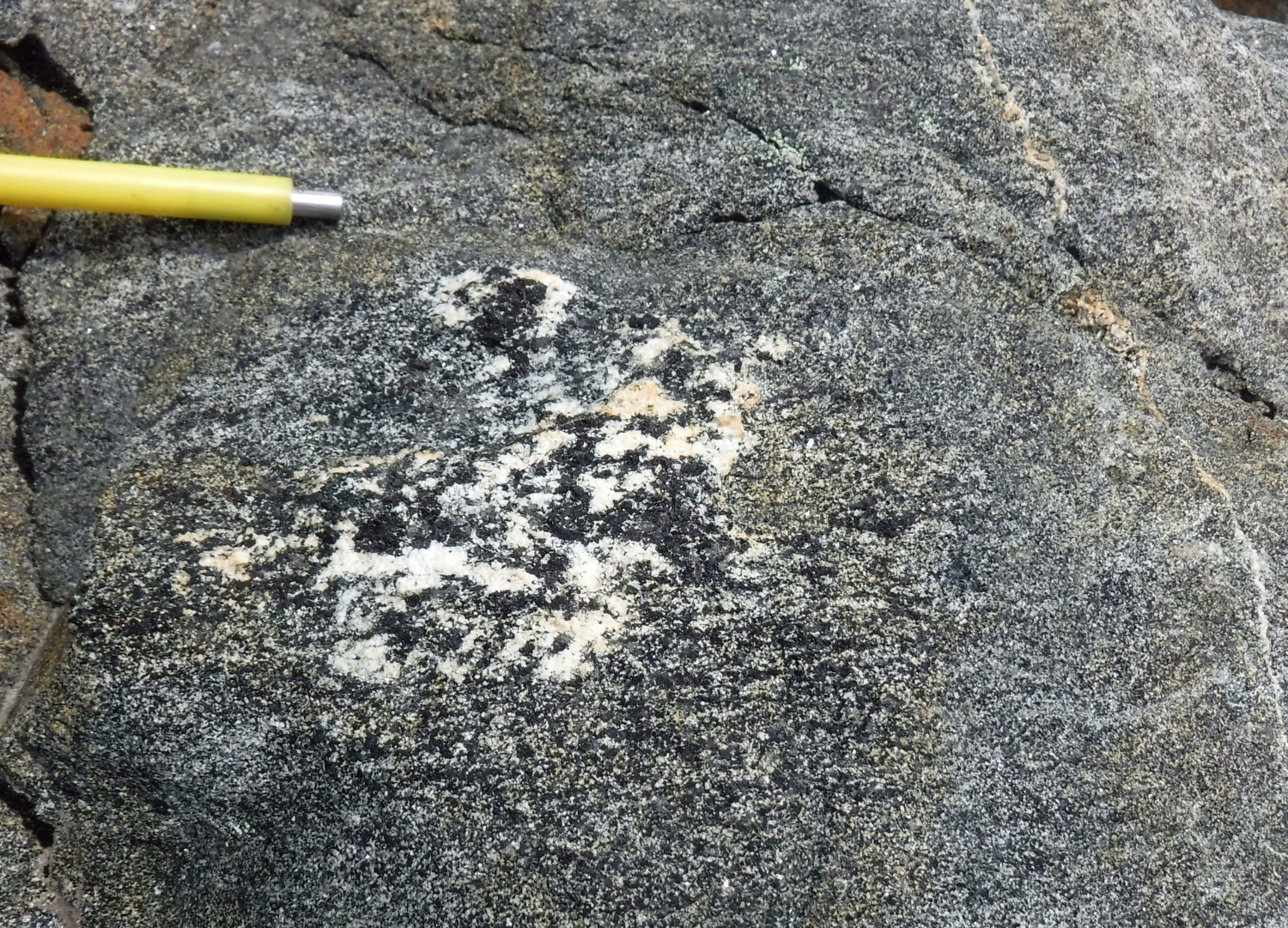 First, leucocratic bands make up 15-20% of lithology; they are interpreted as leucosome. These bands are millimetric to centimetric and have the same grain size (or are slightly coarser grained) as quartz diorite, with which they are in sharp contact. Their composition is tonalitic, but may include a small amount of K feldspar locally, which then corresponds to a granodiorite.﻿ Leucosomes are locally folded or discontinuous and generally conformable to gneissosity. In places, they become coarser and cut the planar fabric. It is possible to observe in places that these conformable and cross-cutting bands produce a typical metatexite mesh texture. Lenticular clusters of clinopyroxene and hornblende are also observed and could be melanosome. Locally, orthopyroxene occurs as relic in the core of hornblende. In less migmatized zones, the leucosome forms slightly coarser-grained centimetric clusters.

Second, diorite, monzodiorite or gabbro bands or layers richer in ferromagnesian minerals (25-50%)  also occur in quartz diorite. Making up 5-15% of outcrops, these are in sharp contact with quartz diorite, and, in places, boudinaged. They are centimetric to decametric and are conformable to foliation. These mafic layers are even grained, medium-grained and can easily be confused with the hypersthene-free gabbro and diorite unit of the Pingasualuit Complex (nApgs1a). However, they are distinguished by the presence of biotite, in similar amounts to hornblende, and the absence of pyroxene.

In thin sections, the fabric is mostly not even grained and interlobed to amoeboid. Plagioclase can be locally granoblastic and ferromagnesian minerals mark foliation. Hornblende is the main ferromagnesian mineral, closely followed by biotite, which has a reddish colour in some thin sections. The latter, in addition to occurring as flakes, also replaces hornblende. Chloritization of biotite is observed in some bands. Quartz has undulatory exticntion and commonly forms thin lenses.﻿ Partially uralitized clinopyroxene is oberved locally. Observed accessory minerals are, in order of importance, sphene, apatite, opaque minerals, zircon, epidote, carbonate and chlorite (altering biotite). 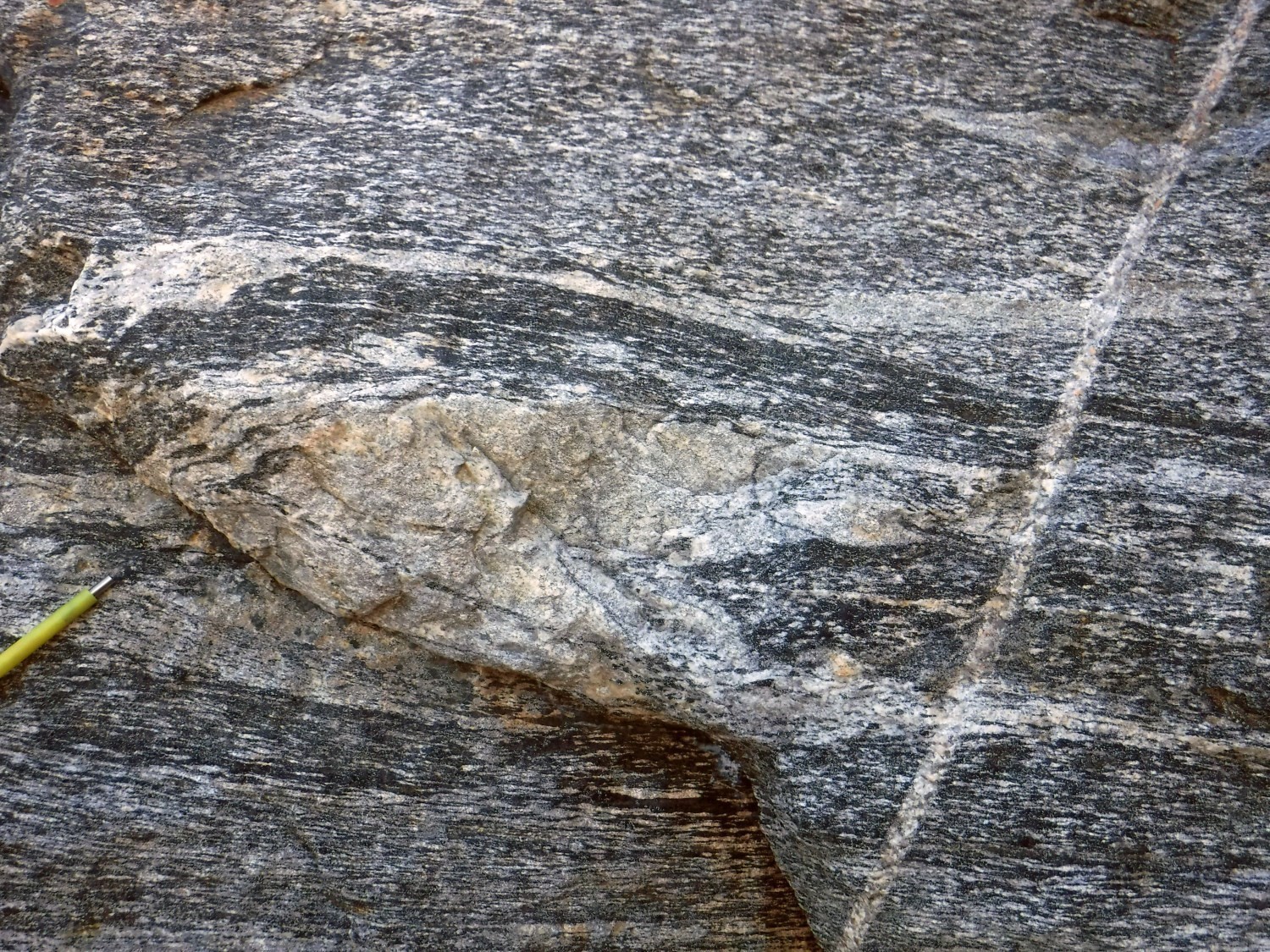 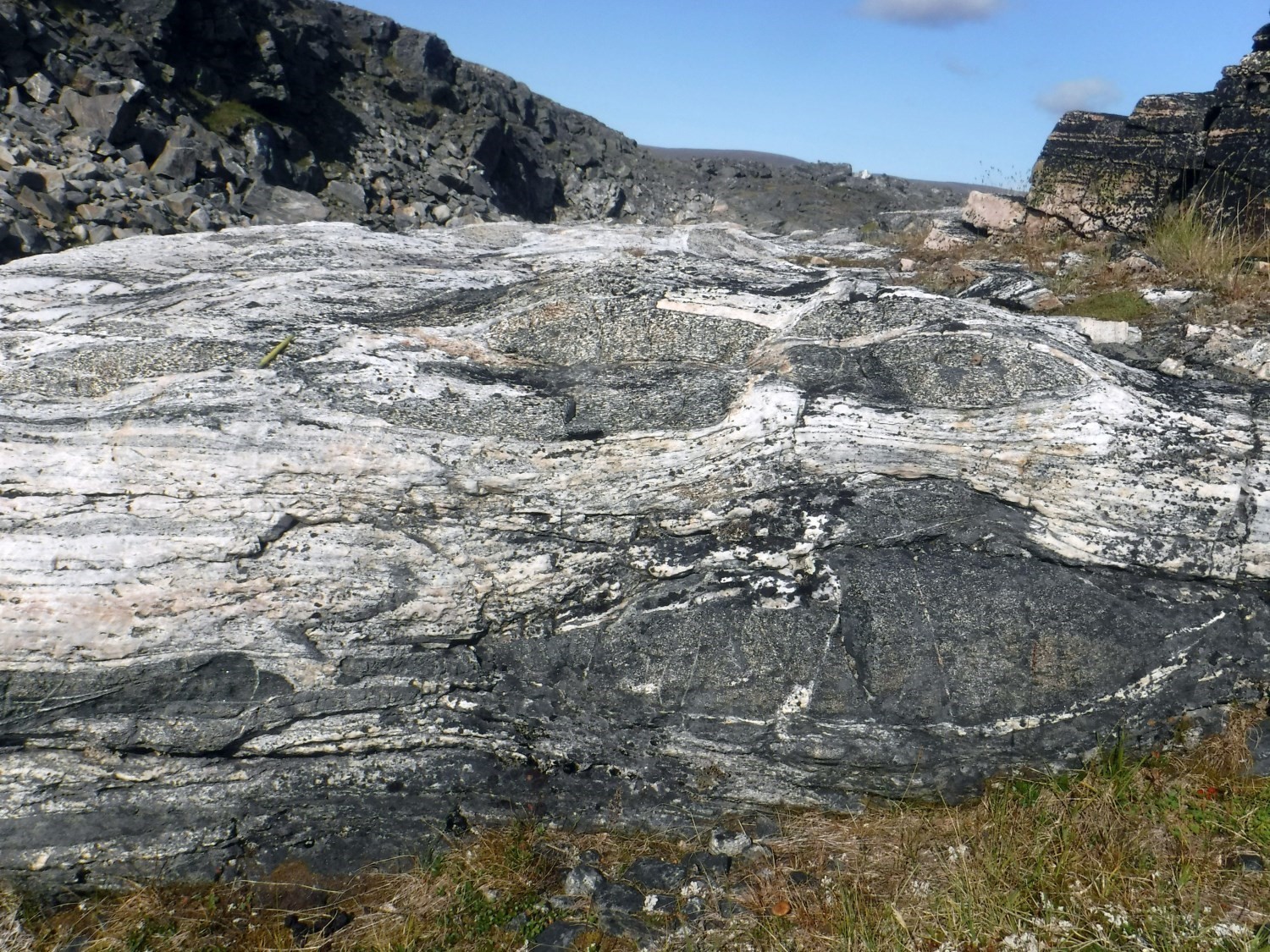 In less deformed areas, the main lithology is granular tonalite containing numerous decimetric to metric diorite and quartz diorite boudins. Tonalite is usually massive in appearance, but contains schlierens or elongated clusters of ferromagnesian minerals similar to those observed in diorite and quartz diorite, that is, predominantly hornblende with lower amounts of biotite. 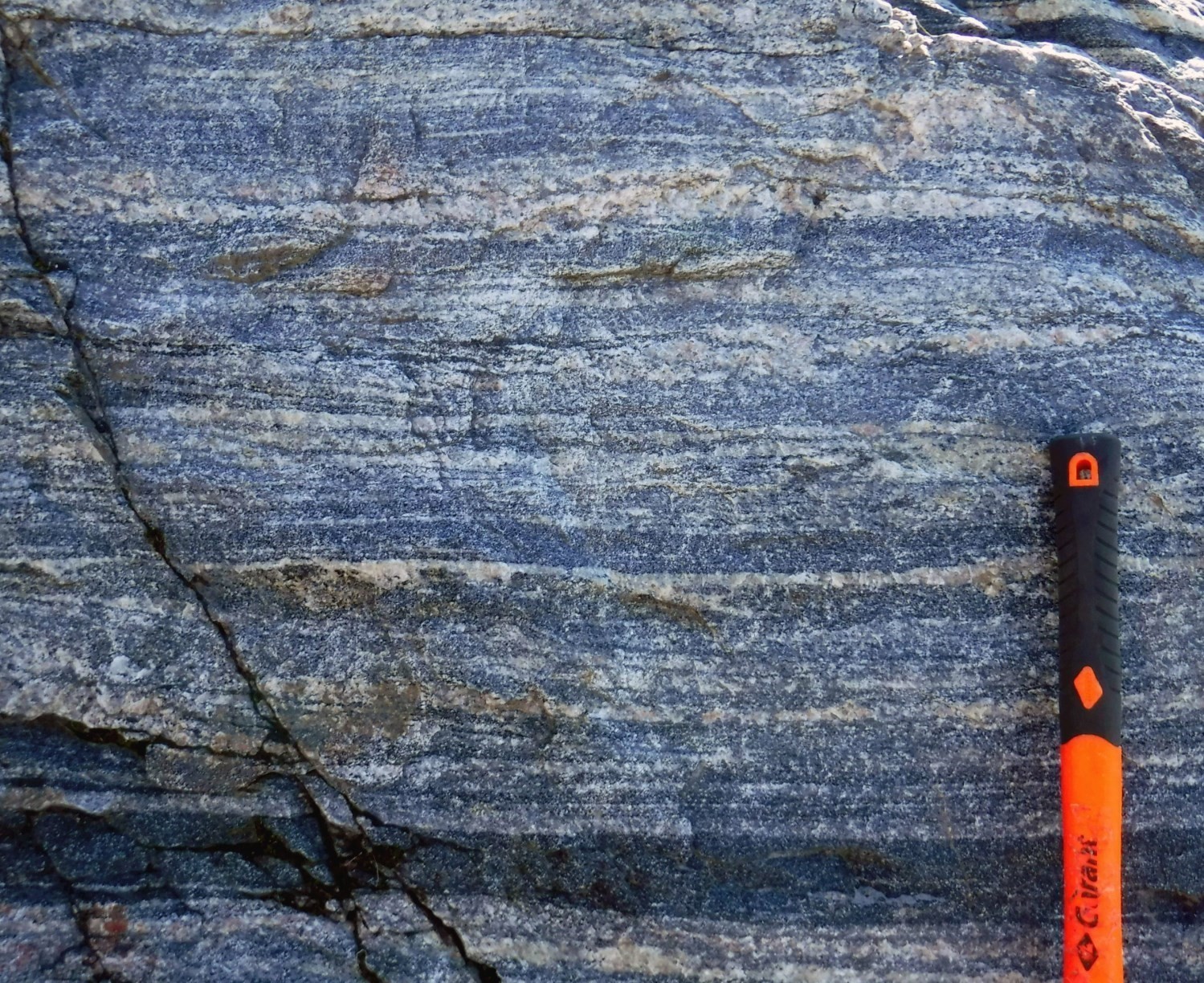 Tonalite differs from quartz diorite in its lighter colour, greater quartz (18-28%) and lower ferromagnesian mineral (7-18%) contents. The rock is even grained, fine to medium grained, and commonly has a more or less clear banded appearance caused by variable contents of major minerals. The presence of whitish to pink leucosome, forming bands or diffuse centimetric to millimetric clusters, also accentuates banding. This leucosome (10-30%) is slightly more granular than the rest of the rock, and tonalitic in composition, more locally granodioritic or granitic. It is locally folded or boudinaged and may contain coarse ferromagnesian minerals. Unit Ashn2 outcrops also exhibit up to 20% decimetric to metric diorite and quartz diorite layers and boudins, as well as decimal layers of non-banded tonalite. Locally, a mylonitic texture and K-feldspar porphyroclasts are observed over decimetric thicknesses. Like unit Ashn1, tonalite also contains decimetric to decametric mafic layers.

In thin sections, the tonalite’s fabric is not even grained, interlobe to amoeboid, and more locally granoblastic. Quartz forms lenses having undulatory, subgrain extinction, and is recrystallized by grain edge migration. Plagioclase is slightly saussuritized and twinning is locally deformed. K-feldspar (<5%) is concentrated in the leucosome. Biotite and hornblende generally have similar contents and are aligned in foliation, but hornblende may also be absent. Some bands are richer in biotite and others in hornblende. Biotite is locally chloritized; large retrogressive muscovite flakes are also observed in plagioclase or within the matrix. Accessory minerals are zircon, apatite, allanite, epidote, sphene and carbonate. 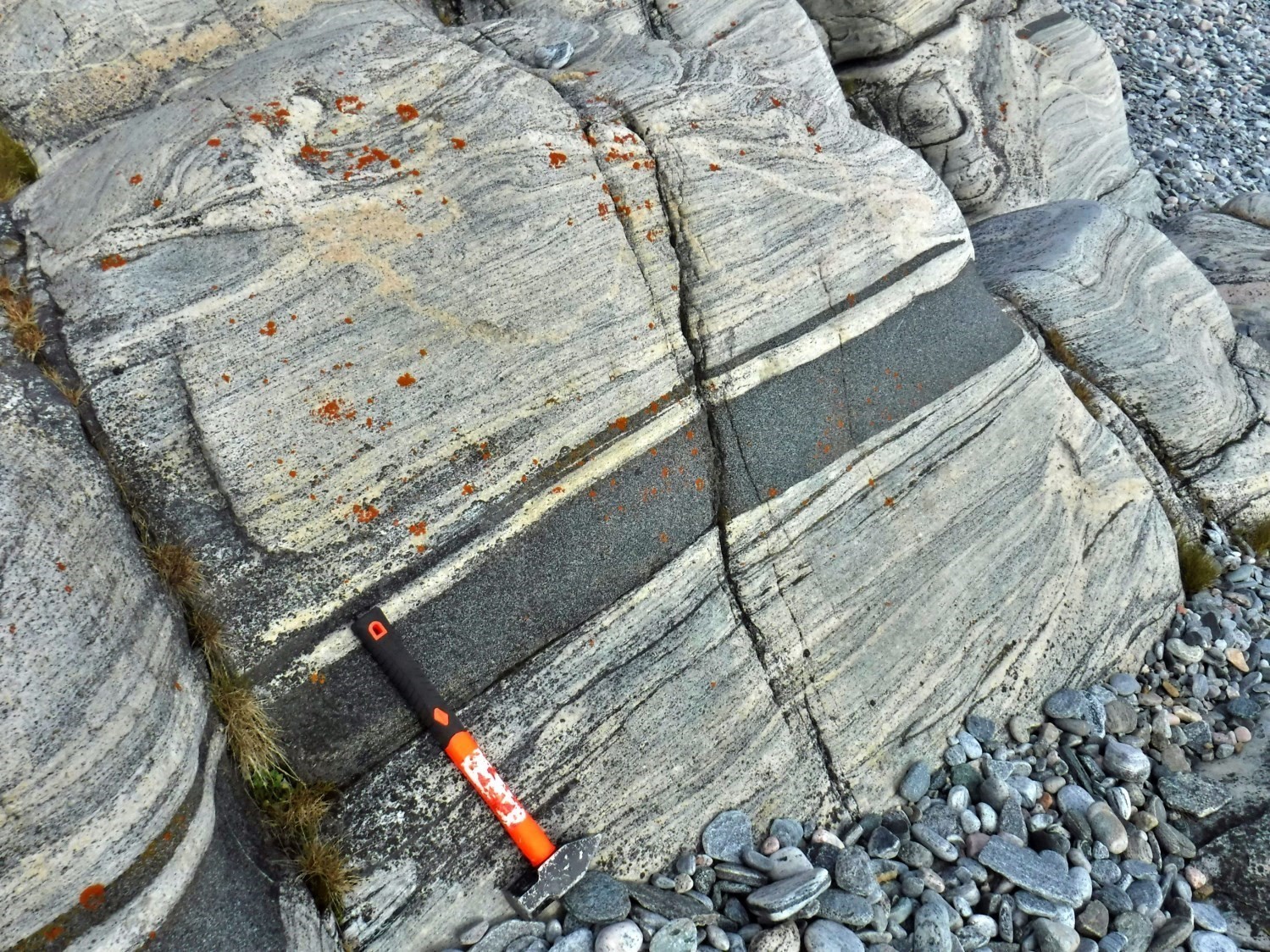 Subunit Ashn2a  has the same characteristics as unit Ashn2 tonalite except for lower migmatization and the presence of a gneissic appearance. Banding is sharp, defined by alternating millimetric to centimetric bands of grey tonalite, white tonalite and dark grey quartz diorite. The leucosome represents <10% of the rock. 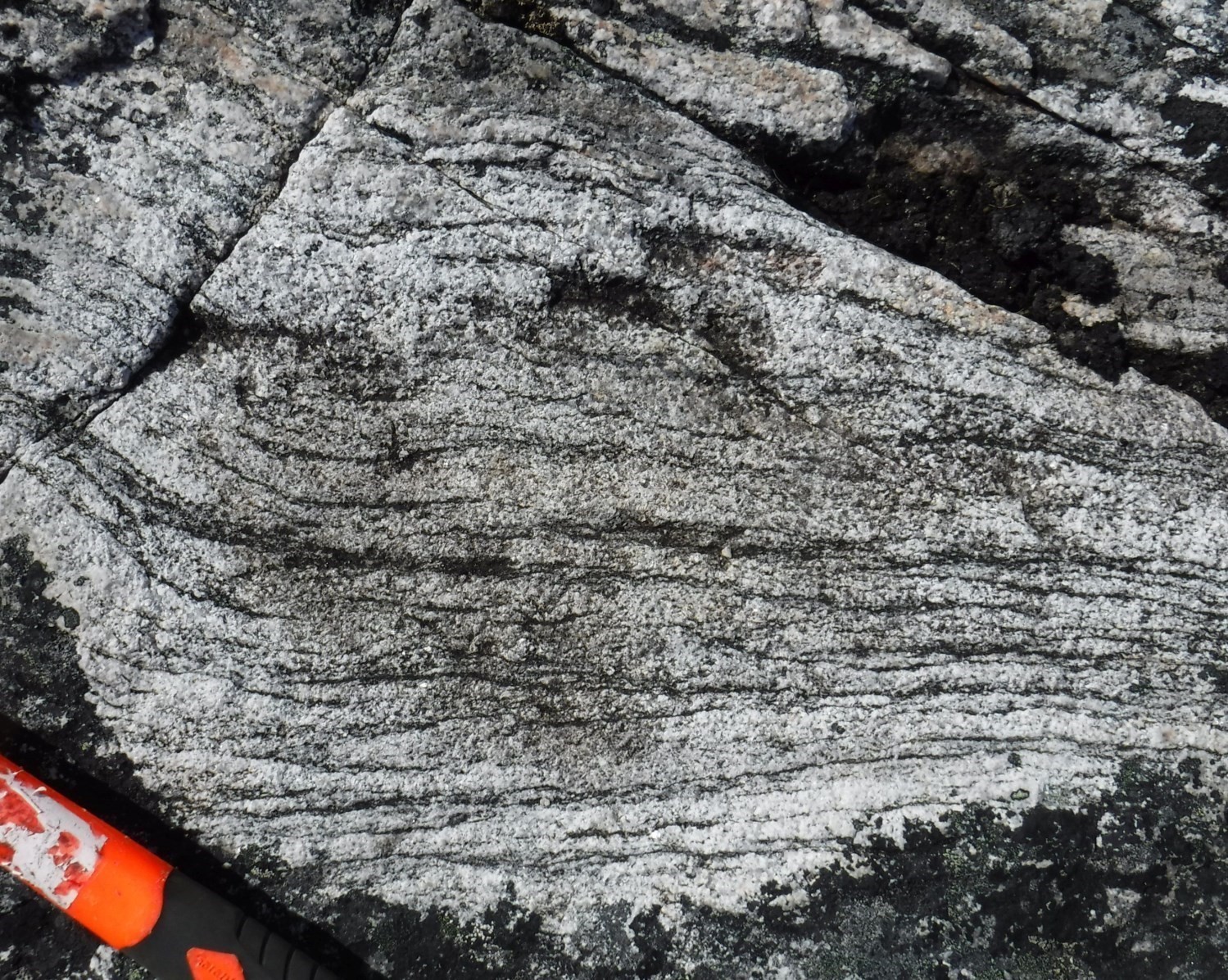 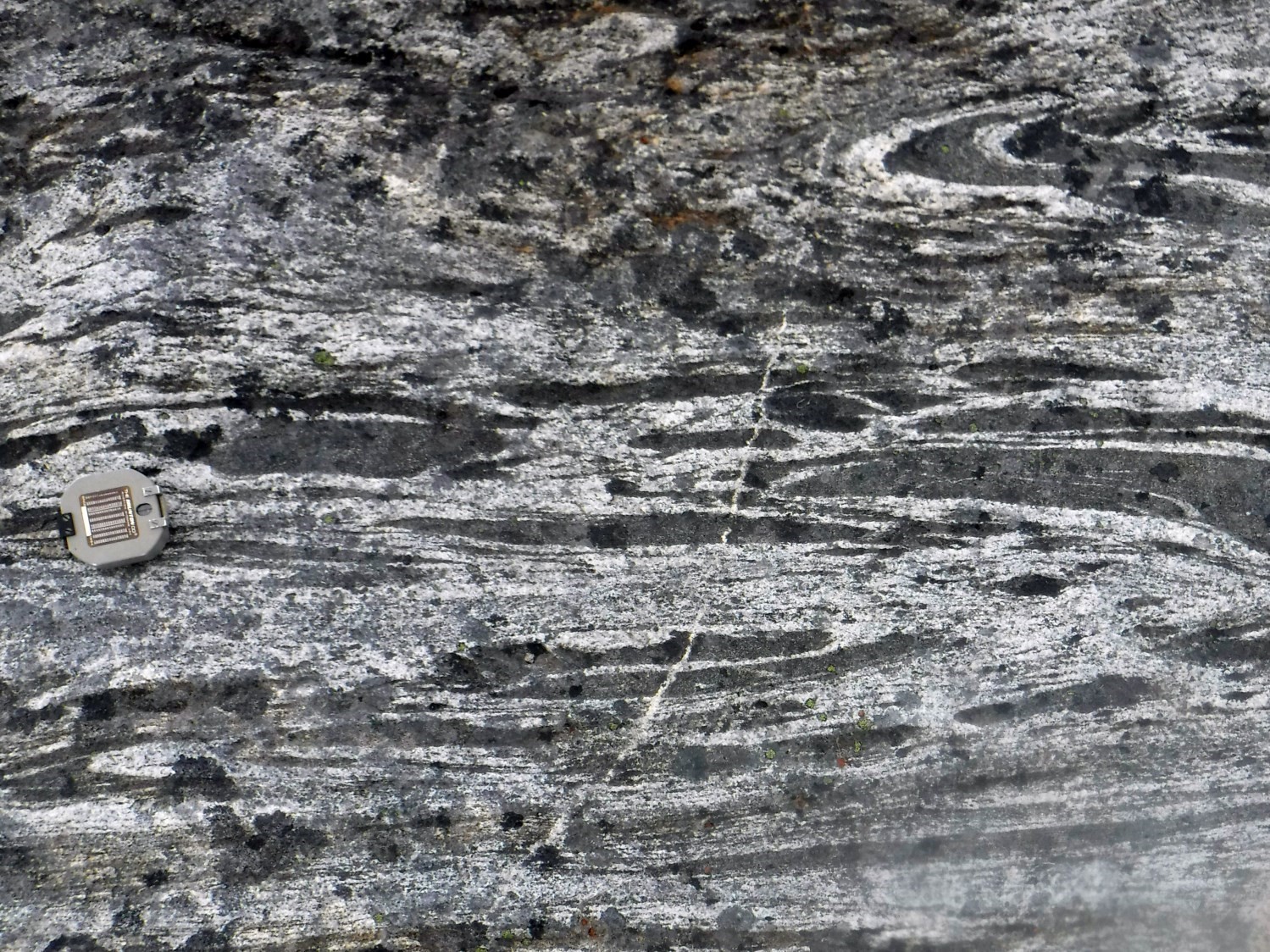 Diatexite of the Sainte-Hélène Complex is of the schlieren or raft type. The leucosome represents >50% of the rock and its composition varies from tonalitic to granitic. Grain size is varying, although mostly medium grained. Rafts are centimetric to decimetric and composed of gneissic tonalite, quartz diorite and diorite. They can be tabular, lenticular or rounded and represent 10-35% of the rock, depending on degree of partial melting. Schlierens are dominated by biotite, but may contain hornblende. The contact between unit Ashn2 migmatized tonalite and unit Ashn3 diatexite is transitional and marked by an increase in the proportion of leucosome. 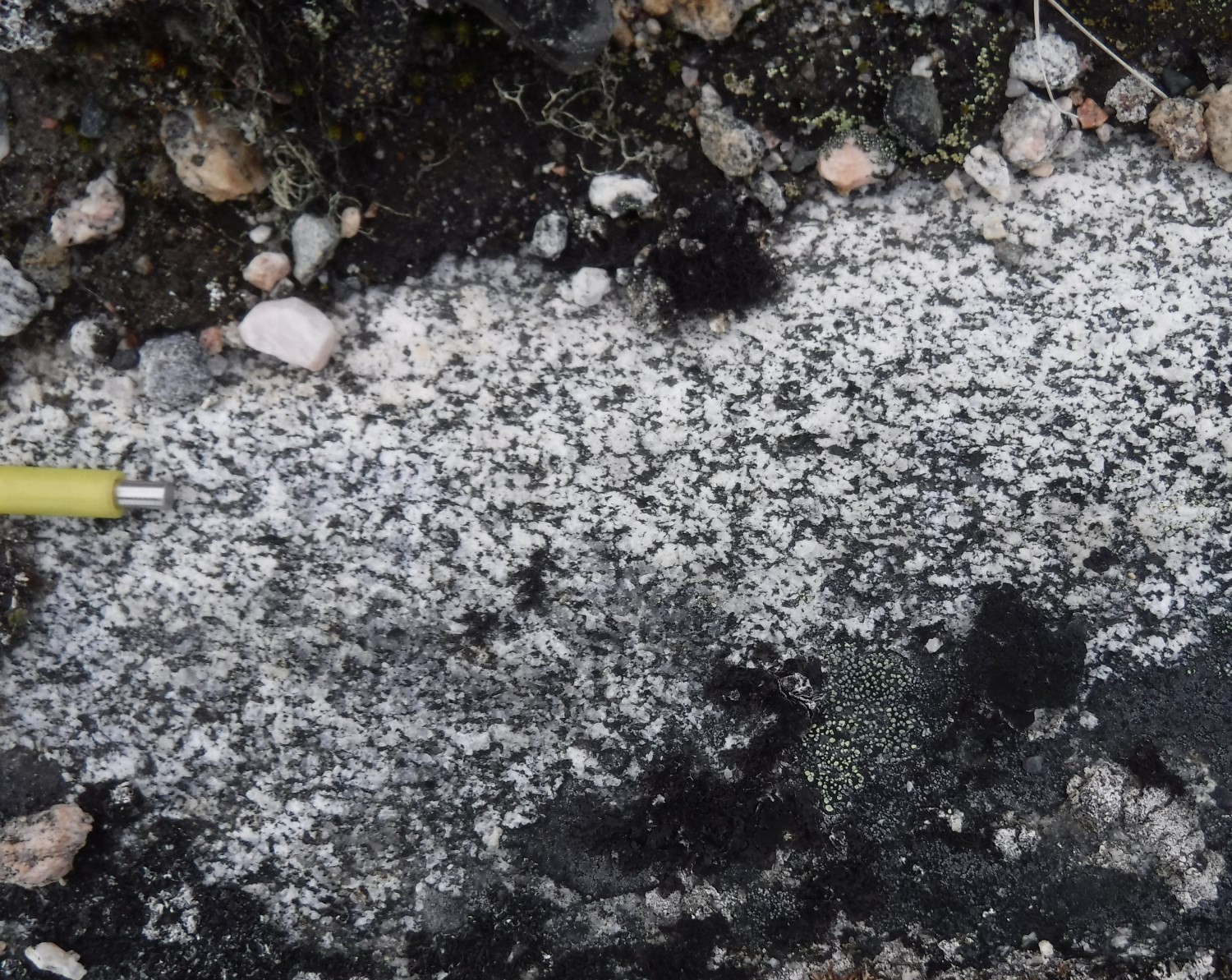 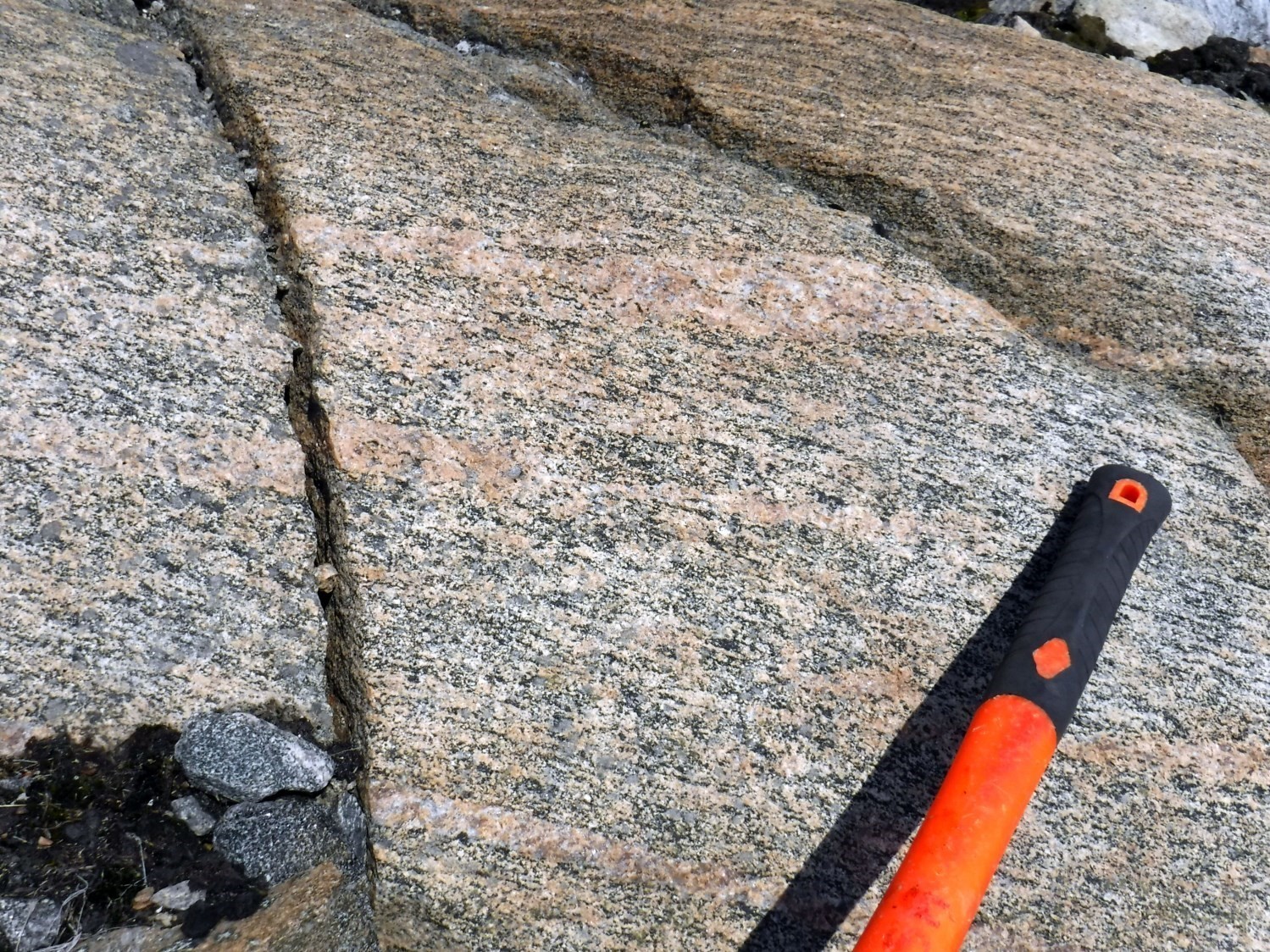 Unit Ashn4 consists mostly of quartz diorite and quartz monzodiorite, but includes a smaller amount of diorite. This unit is spatially associated with other units of the Sainte-Hélène complex with which it is in diffuse to transitional contact. For these reasons, although the intrusive character is commonly better preserved, Vanier and Lafrance (2020) assigned these rocks to the Saint-Hélène Complex. The rock is medium grained, magnetic and more homogeneous in appearance than other units of the Sainte-Hélène Complex, although it locally comprises a more granular diffuse phase that appears to be associated with a mixture of magma. Its speckled appearance is caused by the presence of 12-25% ferromagnesian minerals forming millimetric clusters elongated in foliation or not. These are represented by varying contents of biotite and hornblende, the latter being locally absent. On some outcrops, unit Ashn4 is intruded by granite, which forms centimetric to millimetric bands cutting foliation at a low angle. In these areas, diorite and quartz monzodiorite take on a non-gneissic banded appearance.

In thin sections, the rock has an intrusive appearance with anhedral grains of variable size; finer grains are commonly observed around the coarsest plagioclase grains. K-feldspar (0-7%) is rarely twinned and difficult to identify; perthitic orthose appears to be the main phase. Plagioclase twinning were affected by deformation, and quartz (2–15%) has undulatory, subgrain extinction. Biotite is locally chloritized and plagioclase is partially sericitized, even developing coarser muscovite flakes. Accessory minerals systematically include opaque minerals, zircon and apatite, more sparsely epidote, allanite and sphene.

The Sainte-Hélène Complex forms elongated and folded kilometric masses distributed in the entire western part of the Narsajuaq Lithotectonic Domain. It also forms two ovoid structures, a first one ~4 km by 7 km in the Nallujaq Lake area (sheet 35F13), another ~11 km by 20 km in the Routhier Lake area (sheet 35K08).

A sample of tonalite was collected by Charette and Beaudette (2018) in the Cape Wolstenholme area (outcrop 17-BC-6021). U-Pb analyses indicate that the pluton crystallized around 2794 Ma (Davis and Sutcliffe, 2018). The youngest analyses are from areas displaying well-developed zonation, indicating that age dispersion is likely associated with Pb loss by diffusion in the Paleoproterozoic, rather than the presence of a younger phase.