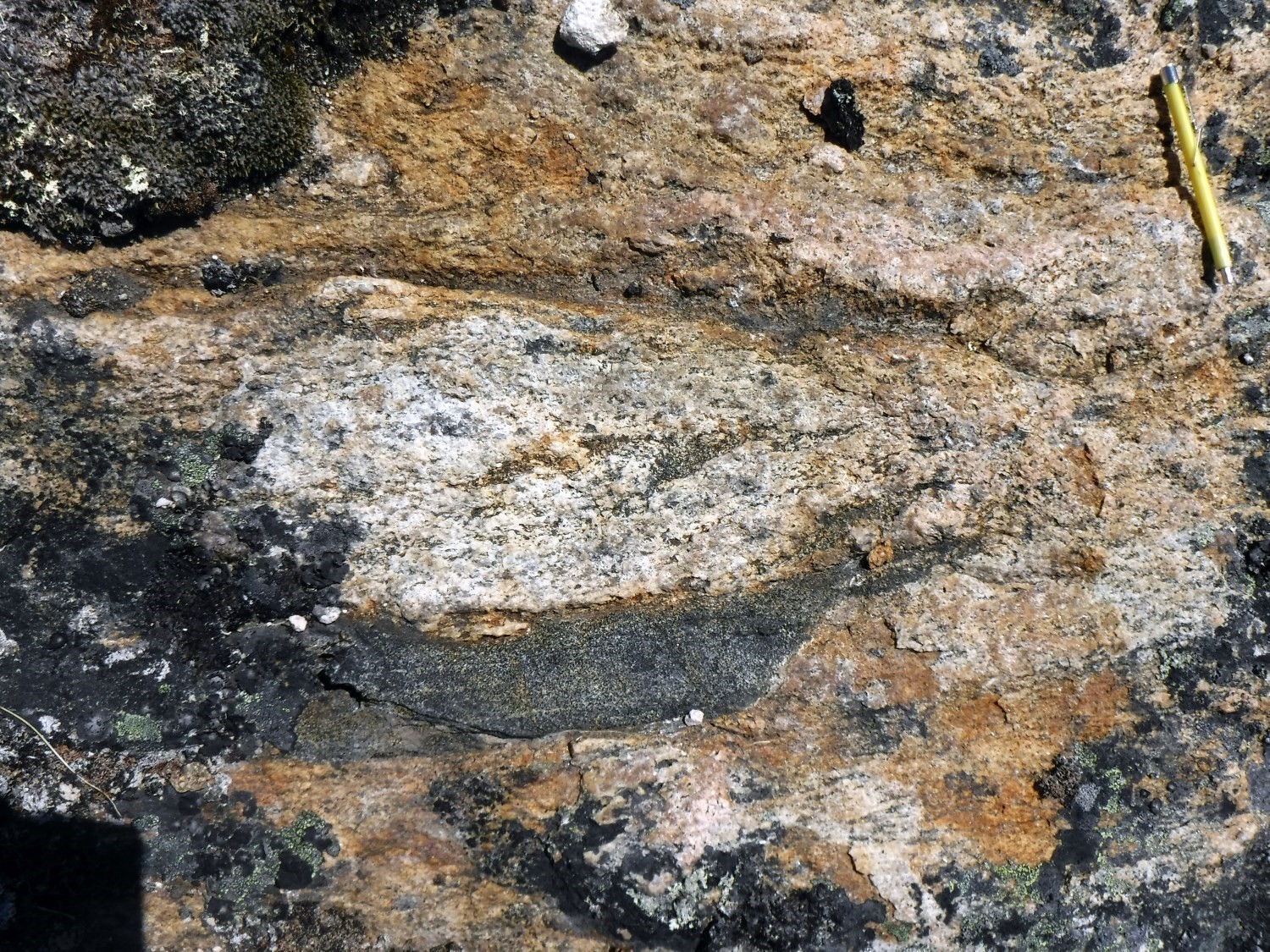 The Navvaataaq Suite, introduced by Charette and Beaudette (2018), includes orthopyroxene felsic intrusive rocks that intrude into foliated to gneissic banded granulitic rocks of the Narsajuaq Domain. It was extended eastward in the Sirmiq Lake area (Vanier and Lafrance, 2020).﻿ The unit name originates from Navvaataaq Lake, which is located near the largest intrusion of opdalite and enderbite within the domain (sheets 35K05 and 35K06). Previously, lithologies of this suite were assigned to units pPNAR1 and pPNAR4 of the older and younger plutonic suites , respectively, described by St-Onge and Lucas (1992) and St-Onge et al. (1992). 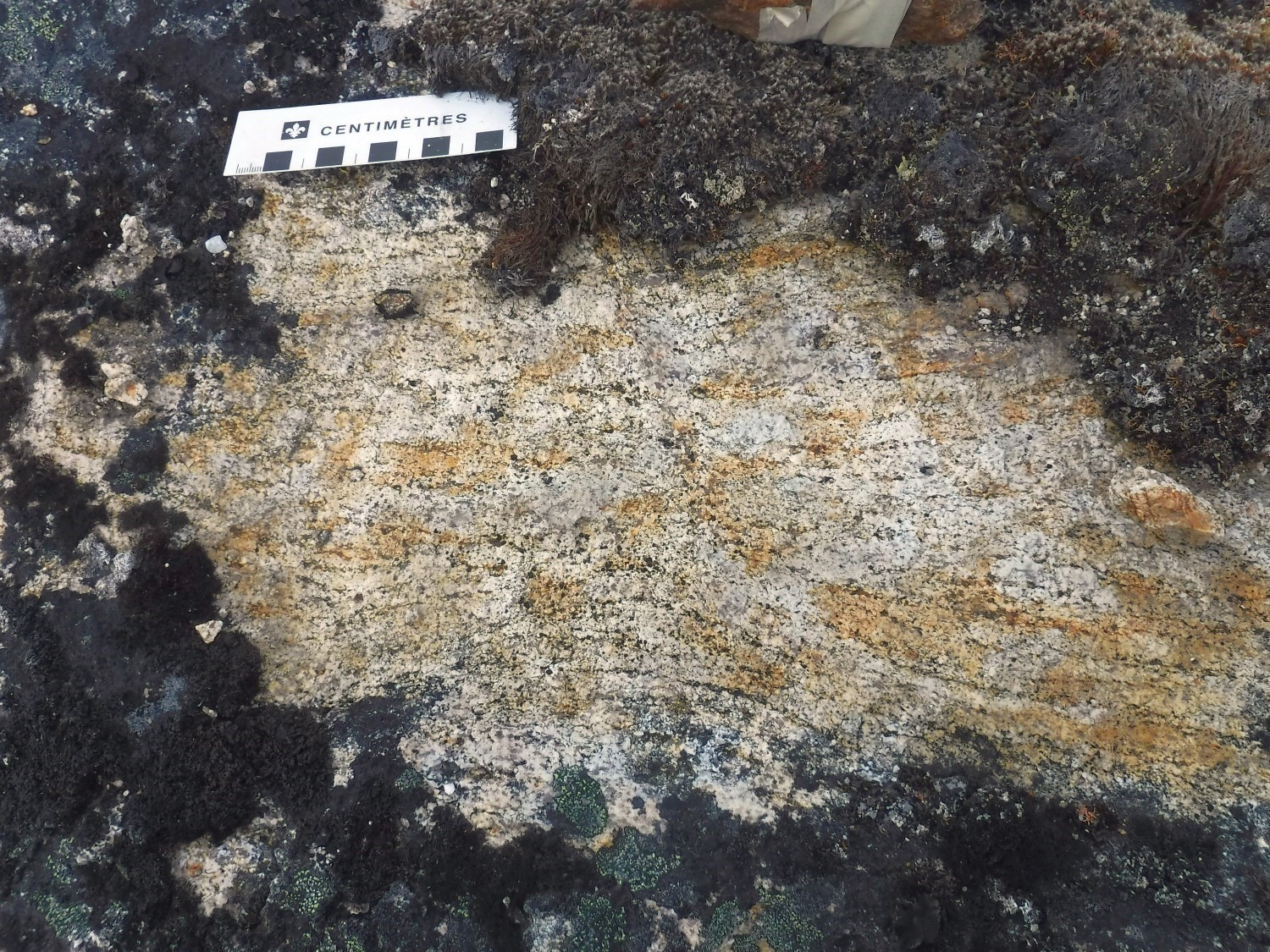 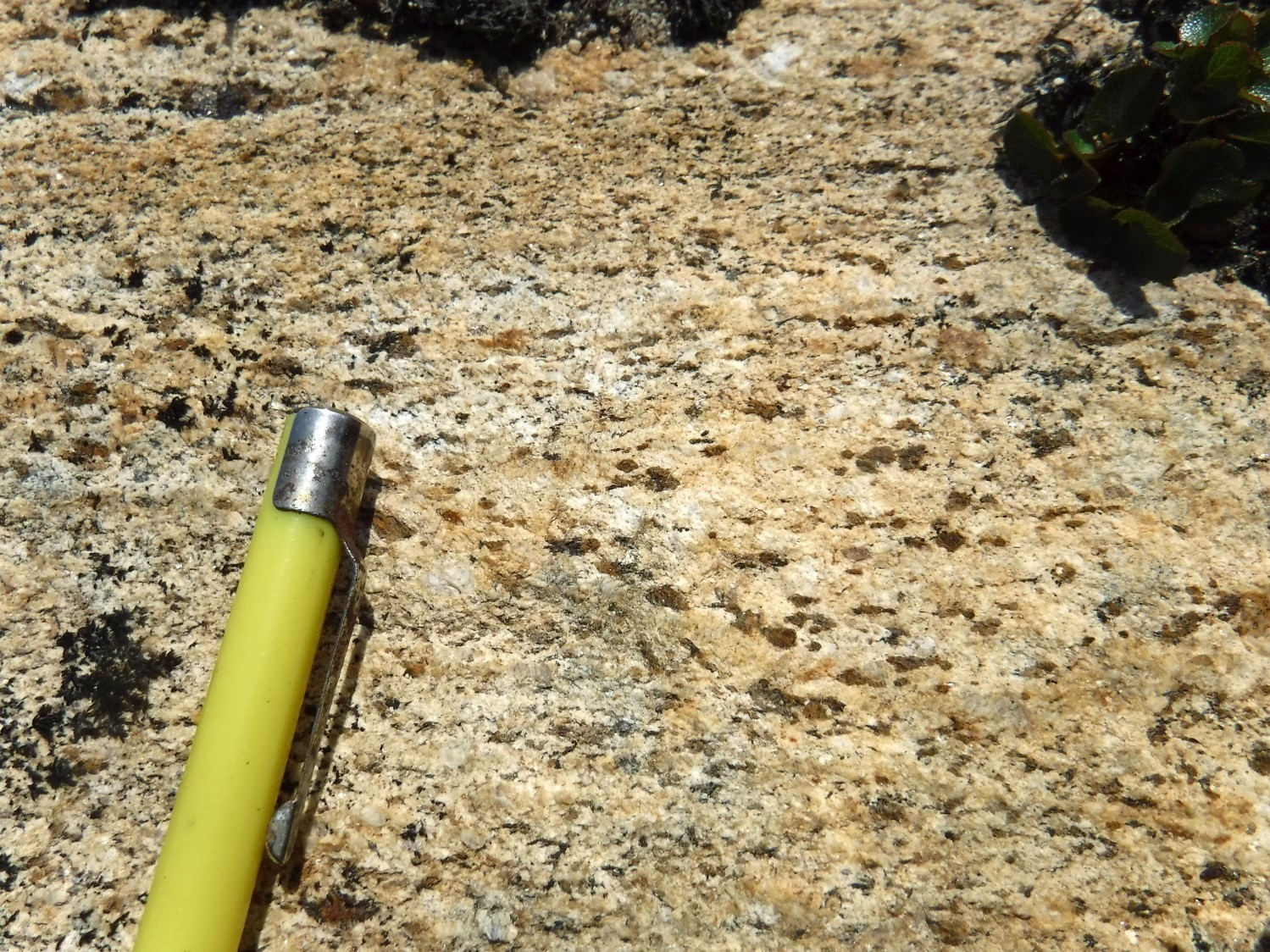 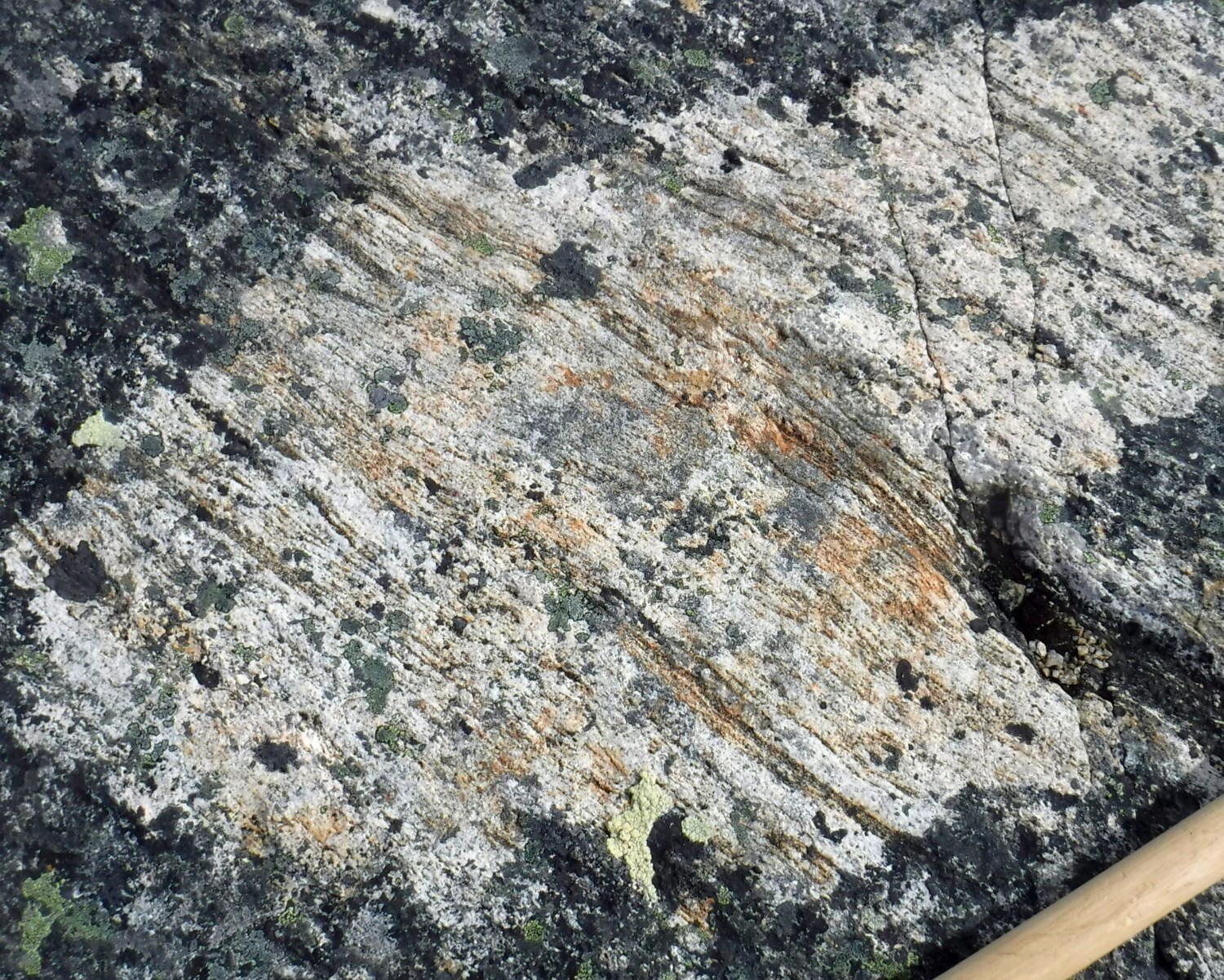 The Navvaataaq Suite (nAnav1) consists of granular hypersthene intrusive rocks characterized by the concentration of ferromagnesian minerals in millimetric to centimetric clusters or schlierens. Variations in grain size (usually medium to coarse-grained, or locally fine-grained) and composition are common and reflect the heterogeneity of the unit. The petrographic study indicates a main enderbite composition, but also reveals the presence of opdaliteand charnockite.In many places, the rock consists of two diffuse phases, occurring as undulating bands or clusters, which are difficult to distinguish other than by grain size variation. Some phases are very rich in quartz (>30%), which then occurs as large zones forming discontinuous bands. In outcrop, the heterogeneous appearance of the Navvaataaq Suite is locally amplified by the presence of 2-30% locally assimilated mafic or ultramafic enclaves, bands and lenses, and 5-20% leucosome or centimetric lighter bands in diffuse contact. These bands are irregular, discontinuous and straight or undulating. They may be conformable to or cut foliation. These more granular phases are interpreted as the result of partial melting by Vanier and Lafrance (2020).

Microscopic photographic study supports the intrusive nature of this suite that is not or slightly recrystallized, but variably deformed. Quartz usually occurs either as irregular zones, interstitial between subhedral to anhedral crystals of feldspar, or as elonagted coarse grains formaing bands or lenses. Grain boundaries are commonly sutured. Quartz regularly has a chessboard extinction attesting to dynamic recrystallization at temperatures above 650°C (Lister and Dornsiepen, 1982; Mainprice et al., 1986). Plagioclase is anti-perthitic and myrmekites are present in the matrix or are concentrated on the rims of ferromagnesian mineral clusters and laminae. The majority of these clusters and laminae are composed of intergrown biotite flakes and hornblende, matted or poikilitic. Apatite and magnetite are usually associated with ferromagnesian minerals. Orthopyroxene generally displays light green to salmon pleochroism typical of hypersthene.﻿ It is associated with ferromagnesian clusters and laminae and is partially to completely replaced by amphibole, biotite, chlorite, serpentine, calcite or a fine-grained assemblage of these minerals. In some places, orthopyroxene appears to be completely replaced by fibrous amphibole clusters (uralitization), or is surrounded by poikilitic anhedral or matted hornblende.

In the eastern part of the unit, orthopyroxene is locally replaced by biotite-quartz symplectites. This texture consists of thin euhedral biotite laths surrounded by quartz. These symplectites are regularly observed in the vicinity of orthopyroxene. In some samples, however, orthopyroxene is absent. It is assumed that it has been completely replaced by symplectite. In the same area, irregular-shaped biotite crystals spotted with rounded inclusions (in optical continuity) may represent anatectic liquid pseudomorphs, suggesting that biotite has contributed to the production of anatectic fluid and orthopyroxene. These textures are consistent with the presence in outcrops of diatexite-associated structures such as schlierens and coarse-grained diffuse bands.﻿ Clinopyroxene occurs in some samples and is partially replaced by hornblende locally. Secondary minerals are very low in intrusive rocks of the Navvaataaq Suite. They include euhedral zircon, allanite and epidote. 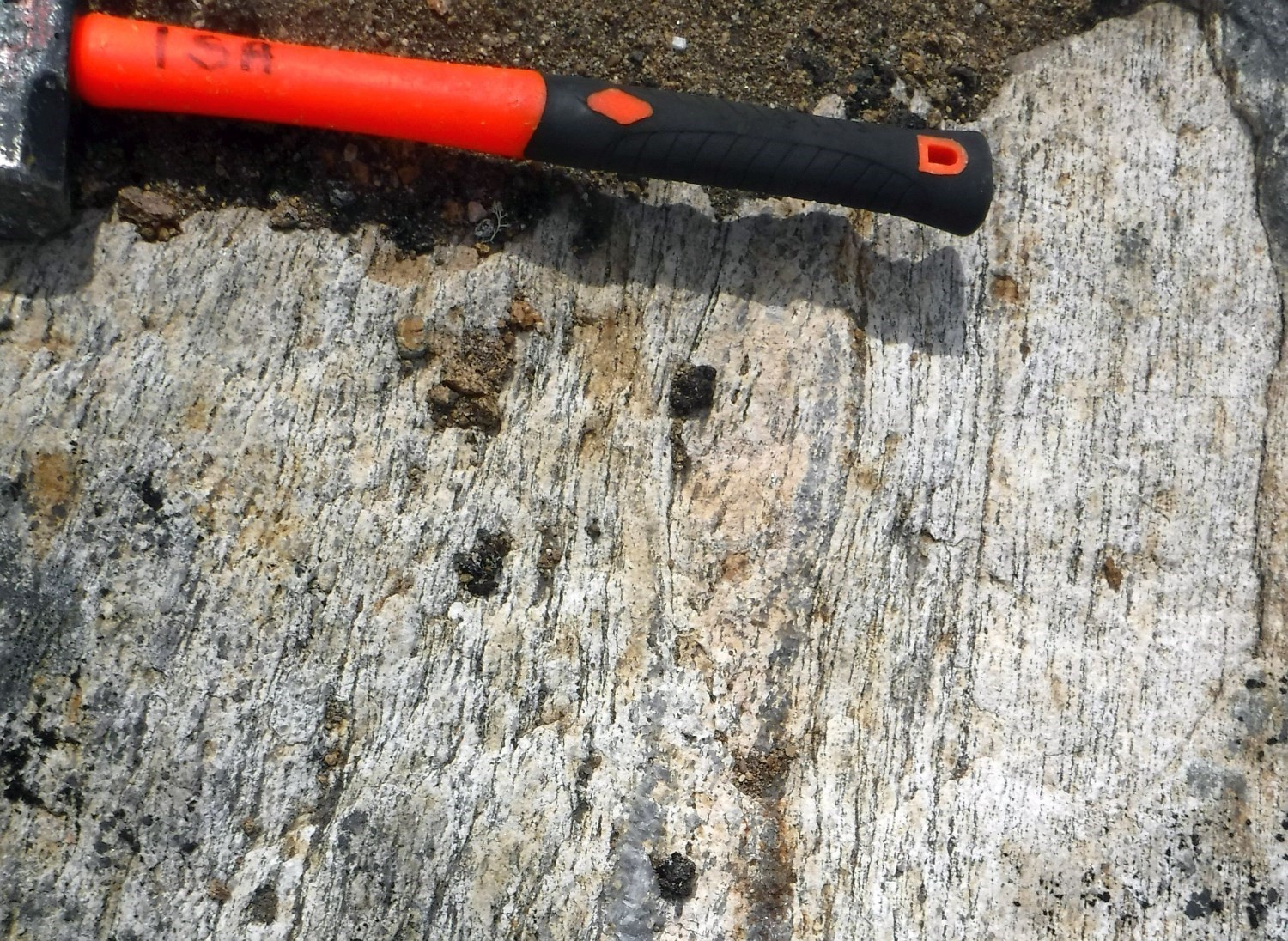 In the Sirmiq Lake area, hypersthene felsic intrusions similar to those of unit nAnav1, but whose granitic composition was revealed by analysis or staining, were grouped into subunit nAnav1a. In outcrop, rocks of this subunit cannot be separated from the main unit. For this reason, charnockites are likely present in unit nAnav1. Charnockite contains 20-40% K-feldspar as fine crystals or lenticular clusters aligned with foliation. Feldspar is mostly microcline, but slightly coarser crystals of perthitic orthose are also observed in thin sections. Textures and ferromagnesian minerals observed are the same as for unit nAnav1, except that antiperthites are sparser, whereas perthites are more common.

The Navvaataaq Suite crosses the central part of the Narsajuaq Domain along an E-W axis from Hudson Bay to the Sirmiq Lake area. It forms subconformable, folded intrusions within the Pingasualuit Complex, Siurartuuq Suite and Estre Complex. It also forms large kilometric masses containing klippes of these lithologies.

An age of ~2560 Ma was obtained in an opdalite of the Cape Wolstenholme area (outcrop 2017-SM-4102; Charette and Beaudette, 2018). This Neoarchean age is interpreted as crystallization (Davis and Sutcliffe, 2018). The Paleoproterozoic age around 1806 Ma was obtained on zicons formed during retrogressive metamorphism.

Analysis of charnockite collected from the Sirmiq Lake area (outcrop 2019-IL-3096; Vanier and Lafrance, 2020) indicate an age of approximately 2676 Ma (Davis, in preparation). The metamorphic ages obtained from monazites and zircons do not match, suggesting a significantly long episode of metamorphism that allowed the partial diffusion of lead in zircon. 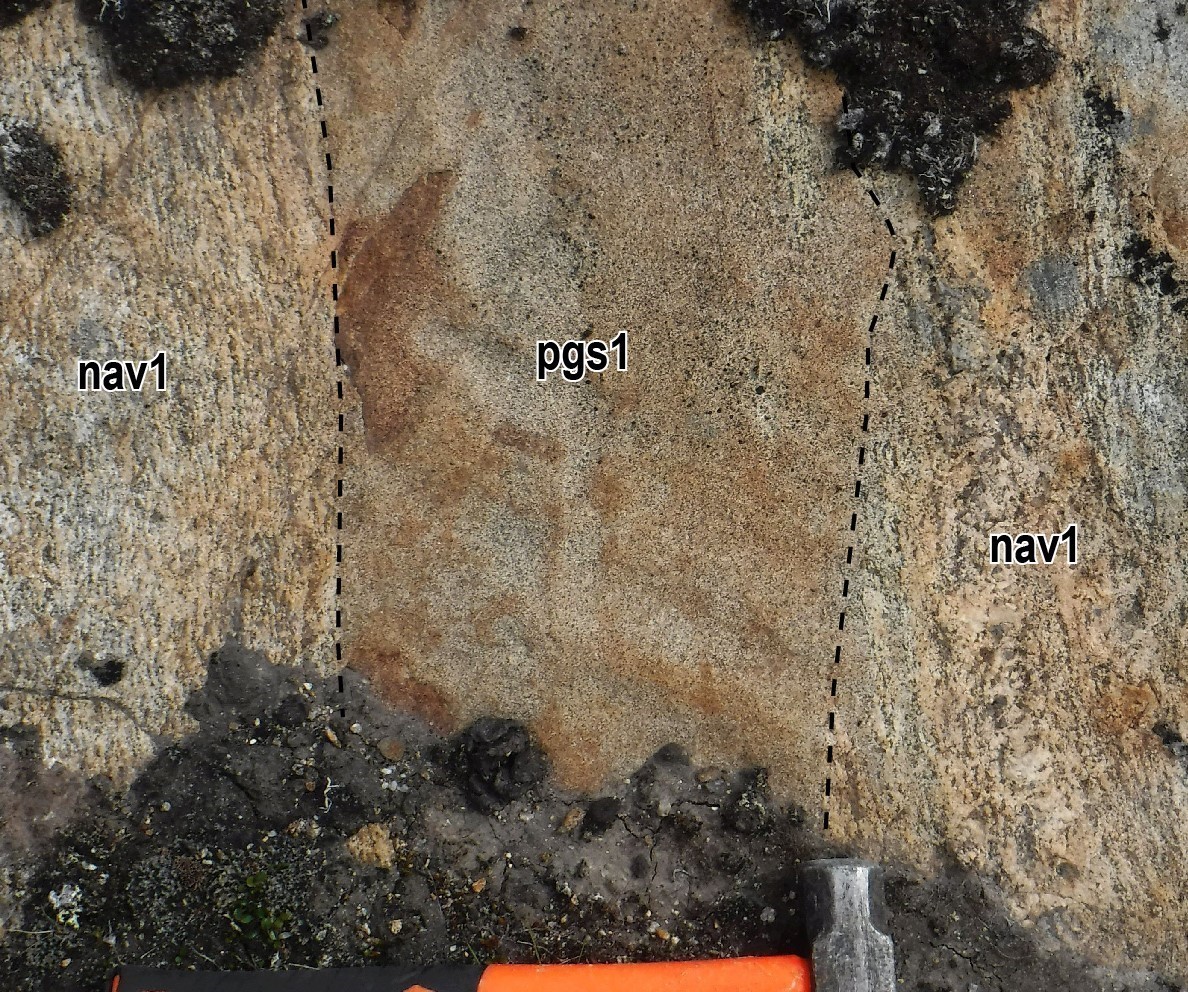 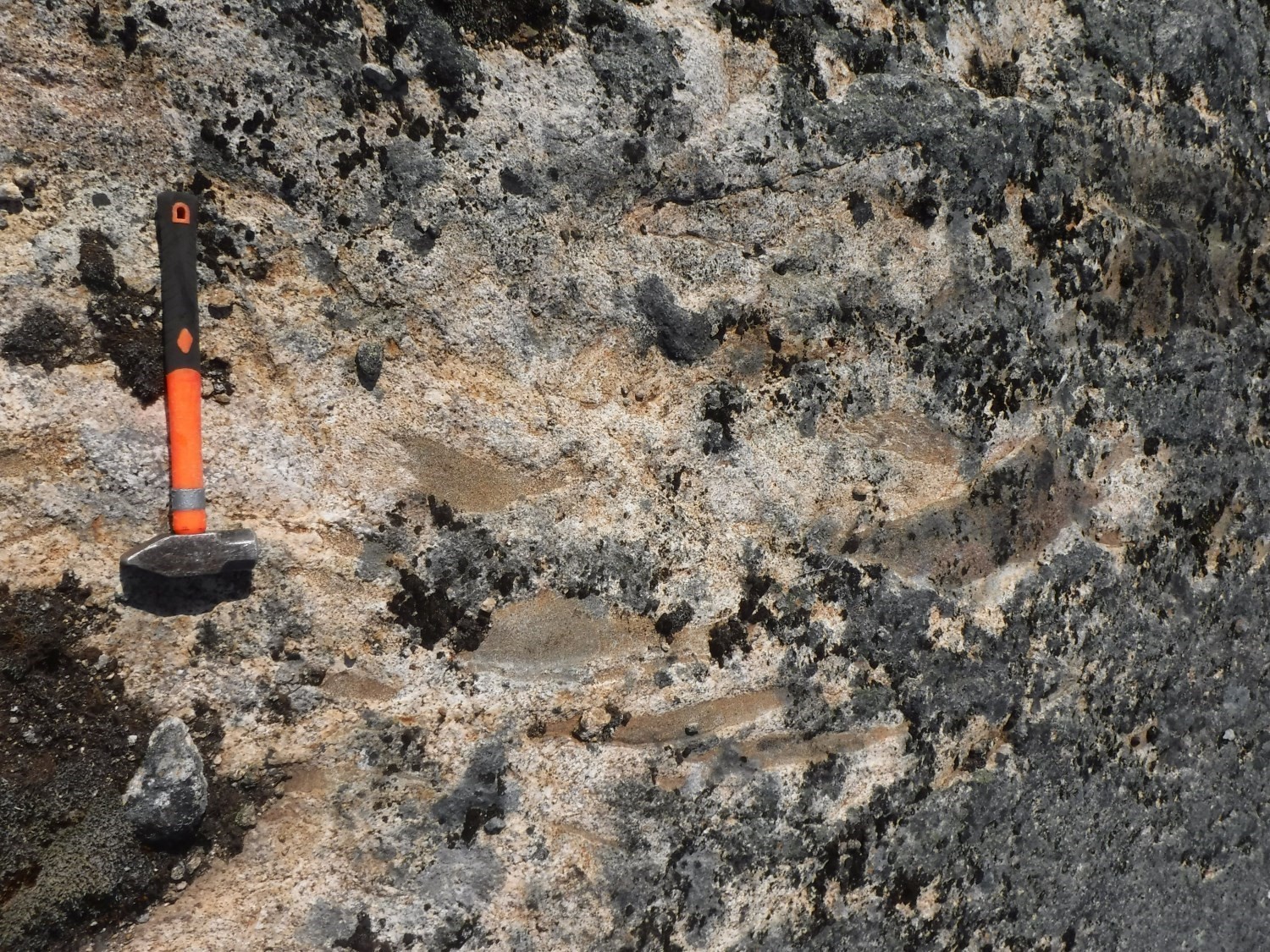