The Estre Complex was introduced in the Sirmiq Lake area by Vanier and Lafrance (2020). Its name is taken from Cape Estre on the shores of the Hudson Strait (sheet 35J05). Informal unit pPpgs2a of the Pingasualuit Complex (Charette and Beaudette, 2018) was also reassigned to the Estre Complex by Vanier and Lafrance (2020) to group all felsic to intermediate granitic gneiss of the Narsajuaq Lithotectonic Domain into a single unit.

The Estre Complex is generally characterized by a well-developed gneissosity, to which is added in places a stromatic texture indicating moderate migmatization. The presence of textures associated with migmatization is the criterion for distinguishing the unit ApPete1a, which seems, in outcrop, to have been preserved from partial melting, from unit ApPete1. Unit ApPete2 groups intermediate gneiss which are variably migmatized, while unit ApPete3 includes gneiss of uncertain origin. All gneiss of the Estre Complex commonly display banding marked by millimetre to decimetre scale compositional variations. The composition of these bands could also be mafic. 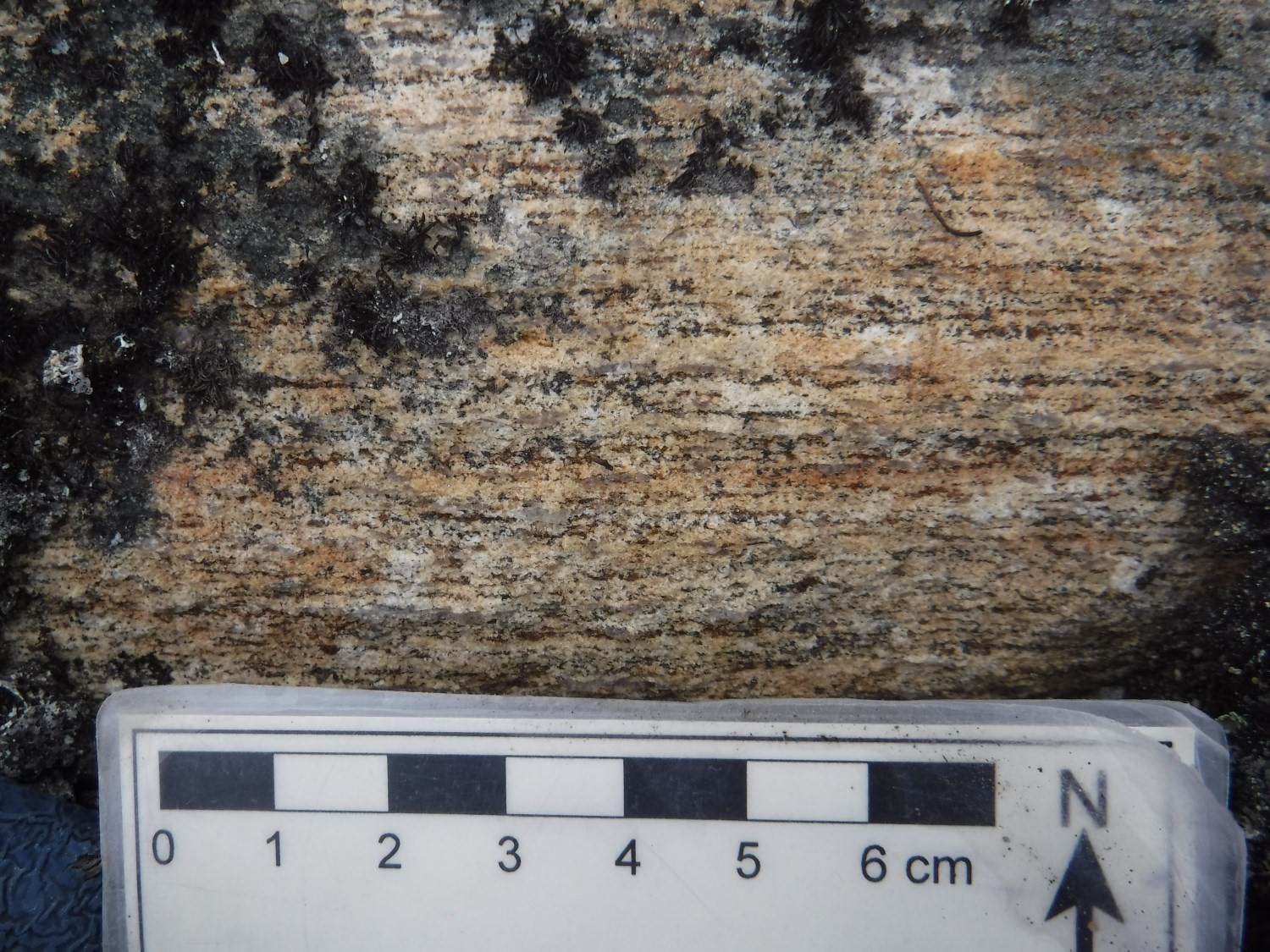 Tonalitic granulitic gneiss of the Estre Complex displays continuous compositional banding parallel to gneissosity. The tonalitic composition is predominant: 20-30% quartz and 7-12% ferromagnesian minerals, mainly biotite and orthopyroxene. Enderbite has a fine to medium-grained, even-grained gneissic texture. Medium-grained bands generally contain more quartz and fewer ferromagnesian minerals. Quartz commonly forms stretched lenses that mark a stretch lineation. The zones richest in quartz have 1-3 mm thick bands. Sparse feldspar phenocrystals <1 cm are visible on some outcrops. Bright red garnet is observed locally, but its content is heterogeneous (0-5%) from one outcrop to another. It is usually euhedral and can form porphyroblasts or poekiloblasts 1-3 cm in diameter. 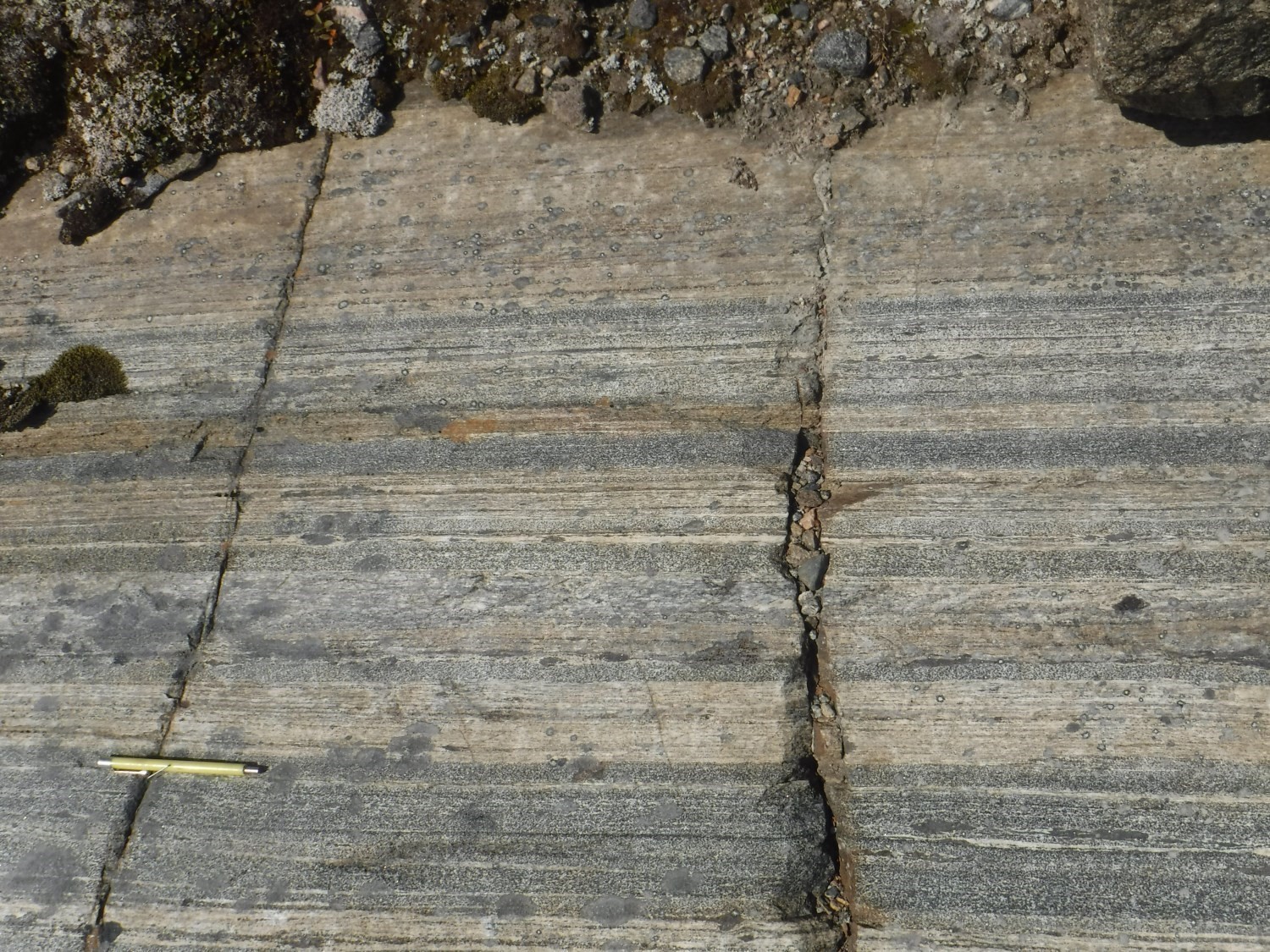 A hypersthene quartz-dioritic phase occurs on certain outcrops, forming bands within tonalite. Bands usually have sharp edges, and their lateral extension is continuous over millimetric to centimetric thicknesses. The ferromagnesium mineral content of quartz diorite is higher than that of tonalite (15-20%). The rock is even grained and fine grained. It is common to observe alternating tonalitic and quartzodioritic bands in gneiss. Gabbronorite bands and lenses are also present within granulitic gneiss. These are similar in appearance to orthopyroxene quartz diorite, but contain more ferromagnesian minerals (~50%). These elongated bodies are decimetre thick and could represent up to 20% of outcrops, possibly corresponding to injections transposed into gneissosity.

Coarser-grained bands a few centimetres thick having a granodioritic, granitic or quartzomonzodioritic composition occur in sharp to diffuse contact within tonalitic gneiss. However, they only rarely represent the dominant phase in outcrop. These orthopyroxene rocks are pale beige with a rusty colour in altered surface, whereas they are brown sugar coloured or dark olive grey in fresh exposure. Colour variations are not related to the K-feldspar content. 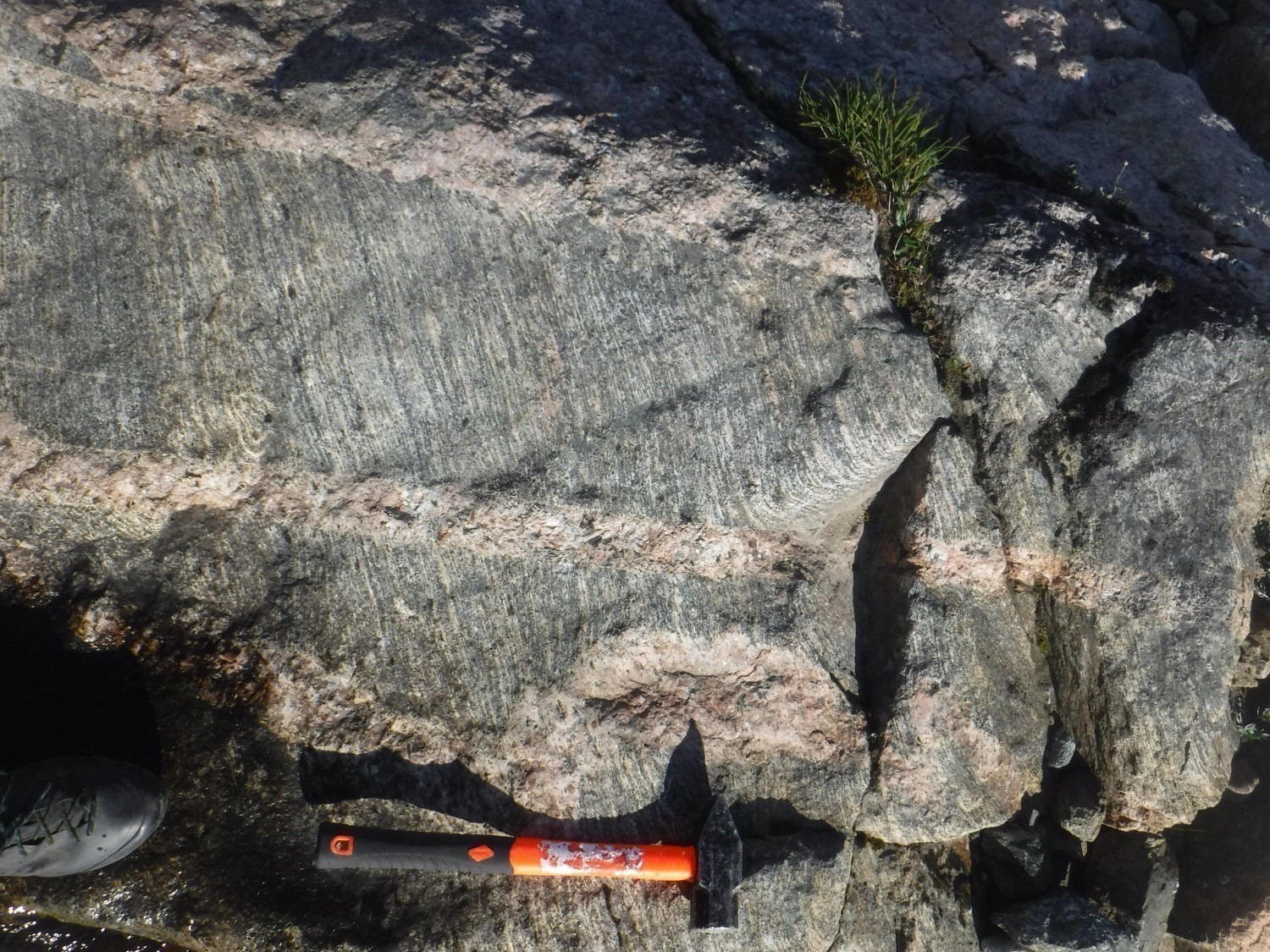 Intrusions of coarse-grained to pegmatitic pink granite commonly cut granulitic gneiss. Their thickness varies from a few centimetres to a few decimetres. They generate a halo in which the orthopyroxene is retrograded to biotite. In this case, the rock is greyish, slightly pinkish in places. The proportion of coarse-grained pink granite generally remains marginal (<3% of outcrops). In areas where it is in higher proportions (up to 30%), granite is deformed and transposed into gneissosity. It also contains coarse orthopyroxene.

The petrographic study reveals dominant interlobed heteroganular textures, particularly representative of plagioclase. Quartz commonly develops lenses or discontinuous bands with coarse amoeboid grains and pinned textures with biotite. These textures indicate dynamic recrystallization of quartz by grain edge migration (Passchier and Trouw, 2005 and references cited). Some samples display core and mantle textures composed of one or a few relics of amoeboid grains, which are surrounded by interlobed to granoblastic grains formed during dynamic recrystallization by subgrain rotation (Passchier and Trouw, 2005 and references cited).

Hypersthene is generally little altered, although it is locally partially serpentinized or completely pseudomorphosed by chlorite. Biotite comes in two forms that can coexist in the same sample. It is either euhedral or irregularly shaped and marked by corrosion gulfs commonly spotted with pseudomorphs of anatectic liquid. Generally, euhedral grains are aligned according to foliation, indicating a lepidoblastic texture. However, some grain clusters have a radial orientation which can be associated with the presence of an orthopyroxene core. Corroded biotite is very rarely in direct contact with orthopyroxene. These observations suggest that this biotite was consumed during prograde metamorphism to produce anatectic liquid and hypersthene, whereas other biotites could represent the product of orthopyroxene retrogressive metamorphism. Thus, samples richest in biotite are also the poorest in orthopyroxene, and vice versa. Hornblende also replaces orthopyroxene in some samples. Common accessory minerals are apatite and magnetite-dominant opaque minerals; sphene and zircon are observed sporadically. 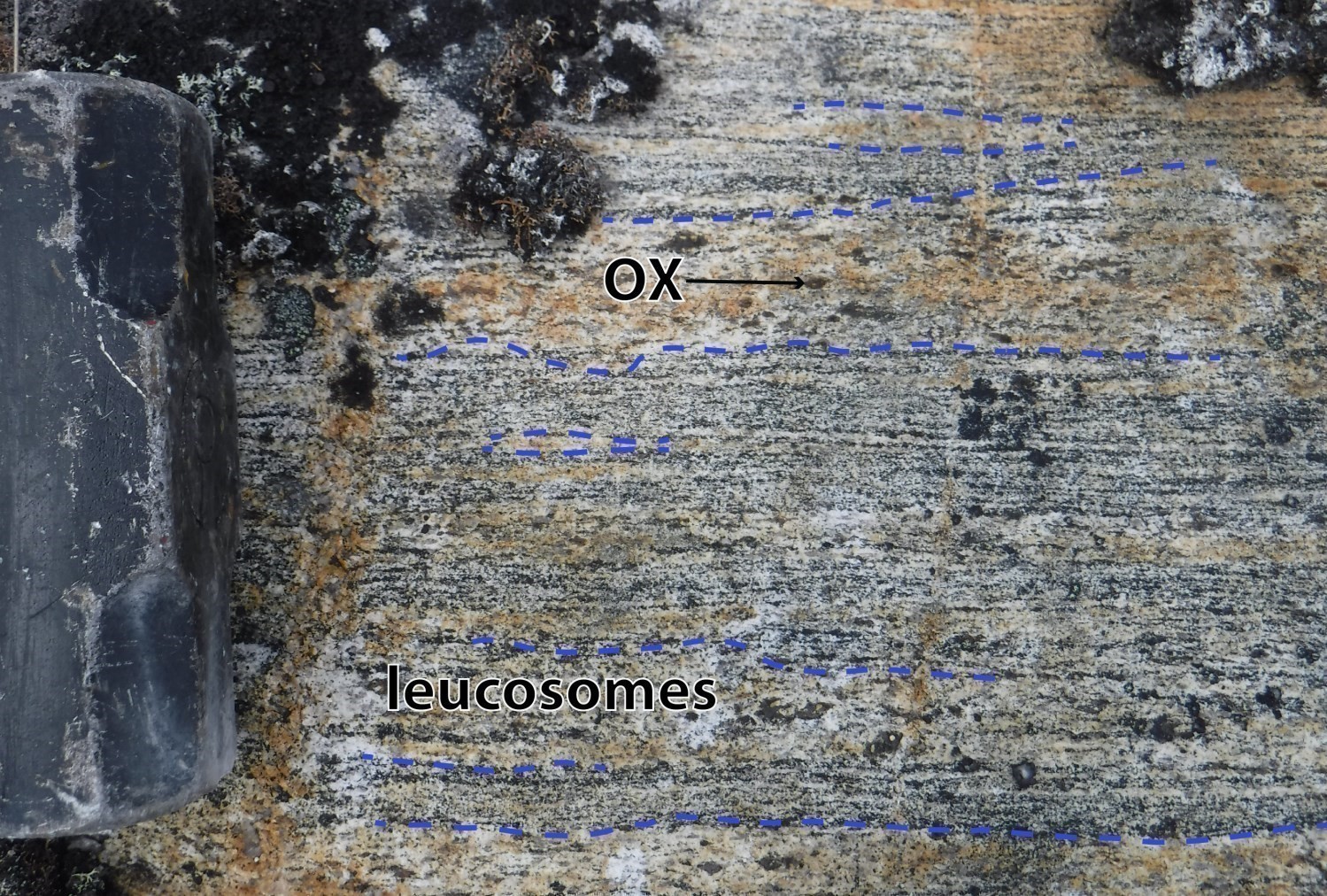 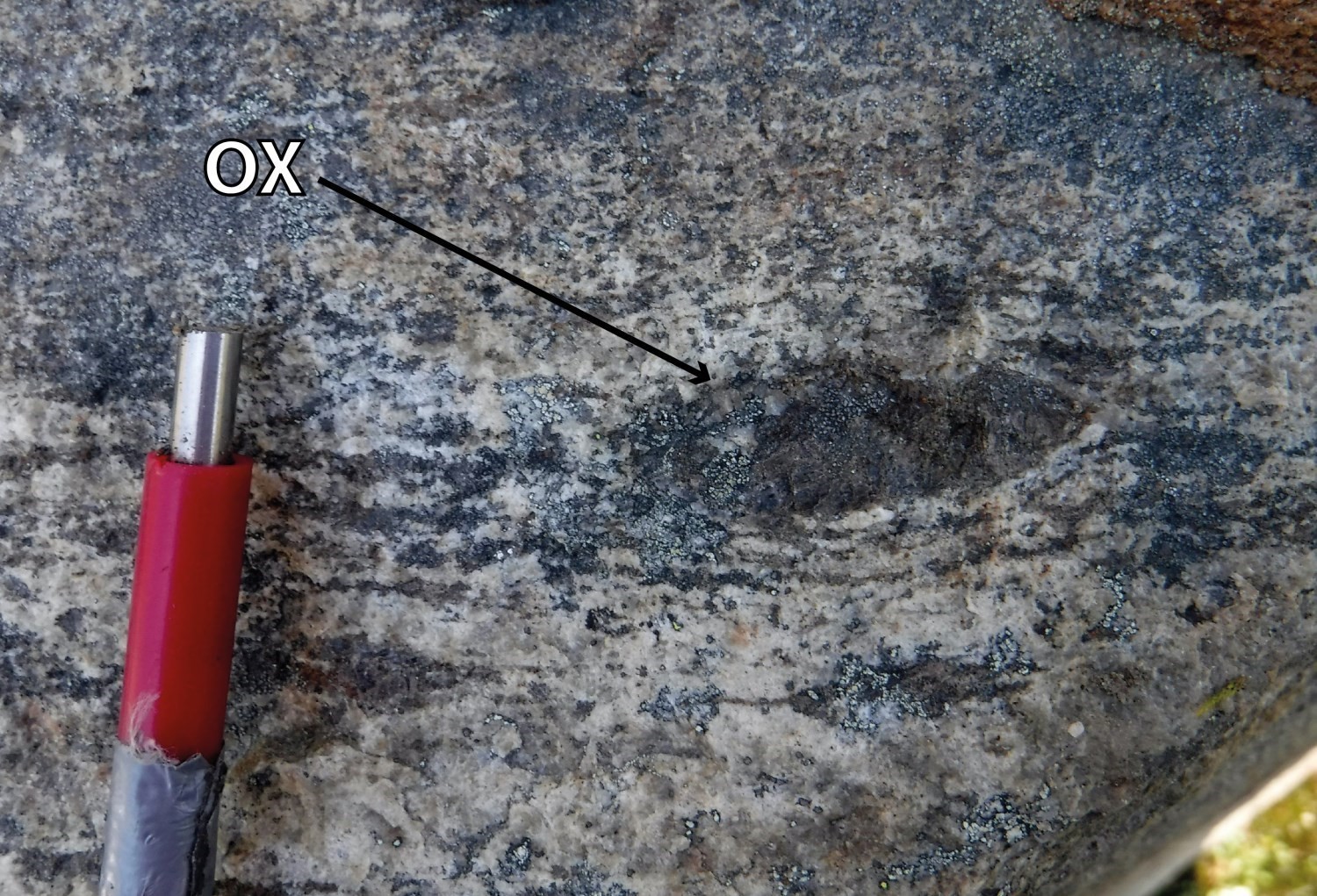 Unit ApPete1a is characterized by the presence of a stromatic texture resulting from partial melting of granulitic gneiss. Leucosome bands, which vary in thickness from a few millimetres to a few centimetres, are distinguished from the paleosome by a coarser granulometry, particularly for orthopyroxene which forms centimetric porphyroblasts. The leucosome also contains poekiloblastic garnet. The presence of orthopyroxene in leucosome bands supports a metamorphic origin of the complex at the granulite facies. Like gneiss, these mobilisate bands are usually affected by the main deformation, so that quartz forms lenses. This post-migmatization deformation makes it difficult to recognize partial melting textures. 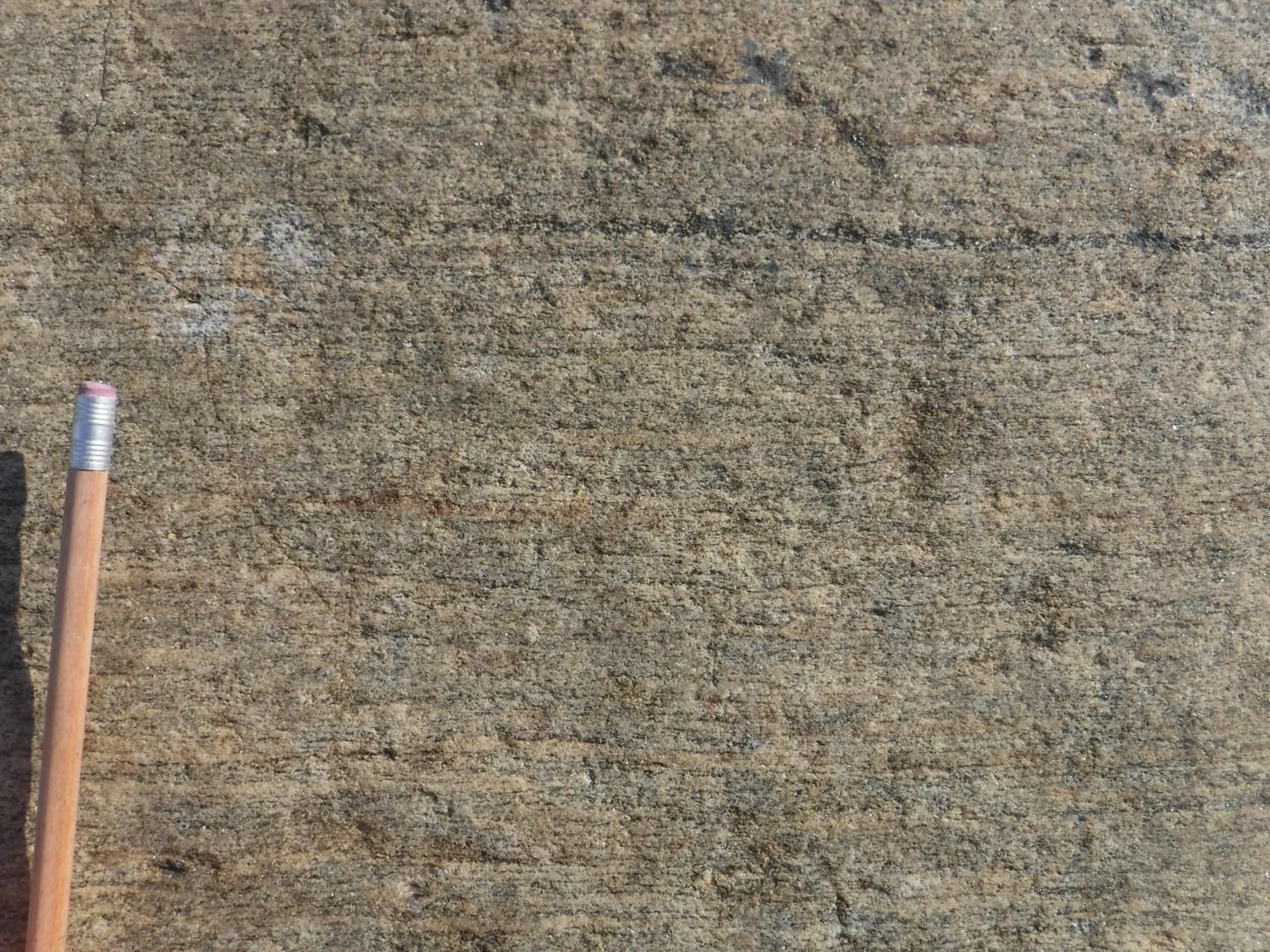 Like unit ApPete1, intermediate gneiss is characterized by millimetric to centimetric compositional banding. However, the dominant composition is intermediate (10-15% quartz), mostly represented by quartz diorite and, more locally, by quartz monzonite or quartz monzodiorite. In contrast to quartz, the ferromagnesian mineral content (15-25%) is higher than in unit ApPete1. However, they consist of the same mineral phases to which clinopyroxene is added in places. Gneissosity is marked by partial segregation of feldspar, quartz and ferromagnesian minerals. In addition to this, there are common variations in grain size along bands a few millimetres to a few centimetres wide. Coarser-grained bands contain quartz lenses and feldspar porphyroclasts. Gneissosity is less significant than in unit ApPete1, mainly due to the higher feldspar content, which tends to recrystallize as fine even-grained and polygonal grains in contrast to quartz which forms lenses or bands.

Gneiss is locally migmatized. Migmatization is equivalent to that present in unit ApPete1a. Most petrographic observations made in unit ApPete1 are also applicable to unit ApPete2. Differences can be summed up by the irregular presence of clinopyroxene and anhedral garnet having a resorbed appearance. 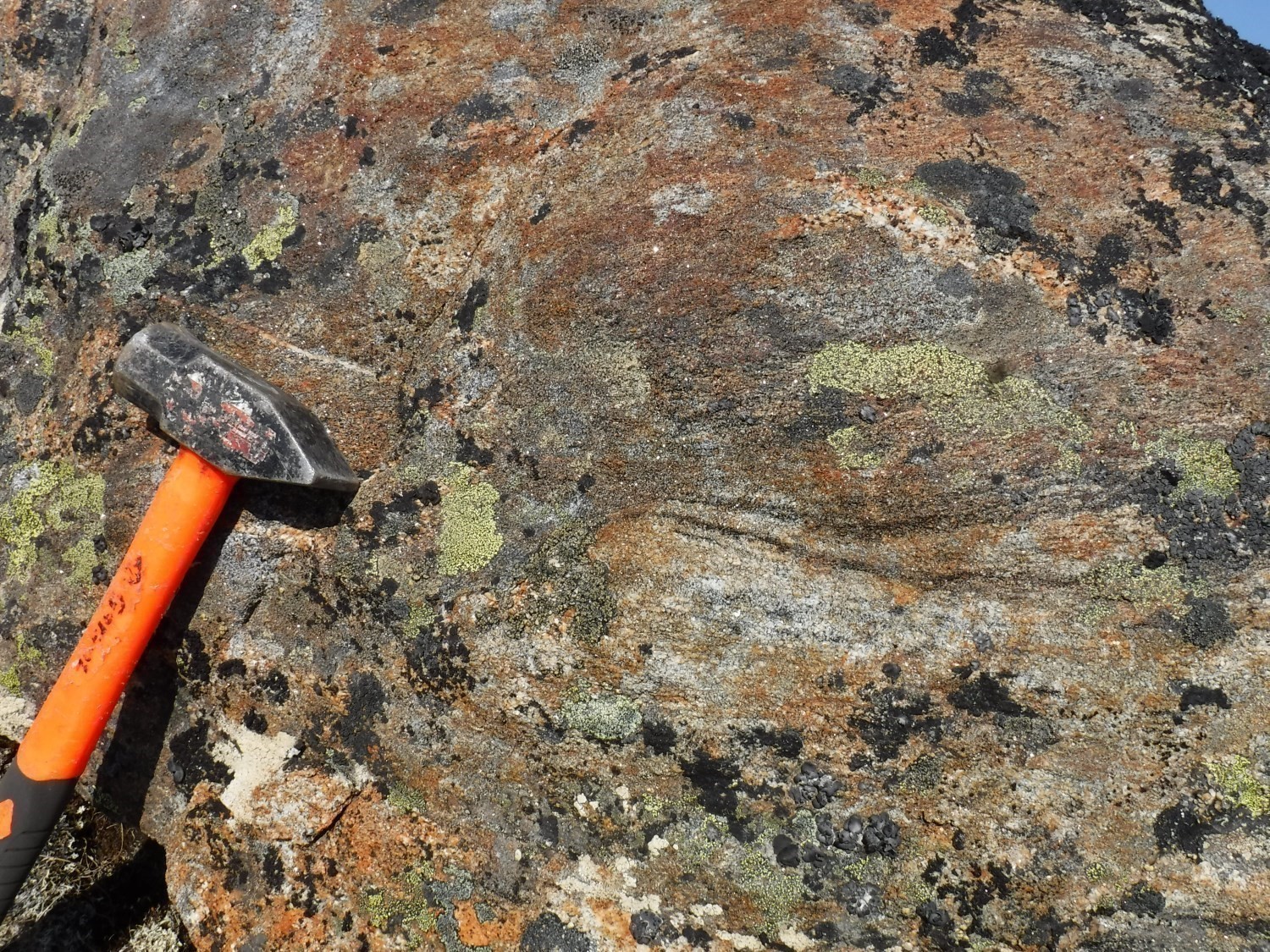 Unit ApPete3 groups intermediate to felsic granulitic gneiss. The uncertain origin of the protolith can be explained by the fine grain size and compositional variations in the rock. These banded sequences are possibly paragneiss, although they could contain orthogneiss. In outcrop, these rocks are brittle and their alteration patina is brownish to rusty. In fresh exposure, they are greenish grey to darkish greenish grey. Straight banding is produced by the presence of 5 to 20% millimetric to centimetric leucosomes, the borders of which are composed of biotite ± garnet ± orthopyroxene. Also, several outcrops are characterized by alternating layers dsiaplying a variation in the ferromagnesian mineral content and the presence or absence of garnet. Some layers are very rich in quartz (>70%), while others are very rich in garnet (up to 40%). Locally, diatexite layers containing biotite-garnet schlierens are observed within granulitic gneiss.

Rocks of unit ApPete3 display compositional variations in the form of diffuse centimetric bands of tonalite, granite, quartz diorite and locally quartz monzodiorite. Ferromagnesian minerals are disseminated or in fine laminae and account for 10 to 30% of the mineralogy. Biotite and orthopyroxene are the main ferromagnesian minerals. In places, the latter is partially replaced by serpentine, oxides or hornblende. Hornblende and garnet crystals are rarely added to the paragenesis. Garnet occurs as porphyroclasts and is locally poikilitic. Several partial melting evidence has been observed in thin sections such as pseudomorphs of anatectic liquid, represented by irregular quartz films in the matrix, and inclusions in garnet whose shape is dictated by its crystal structure. 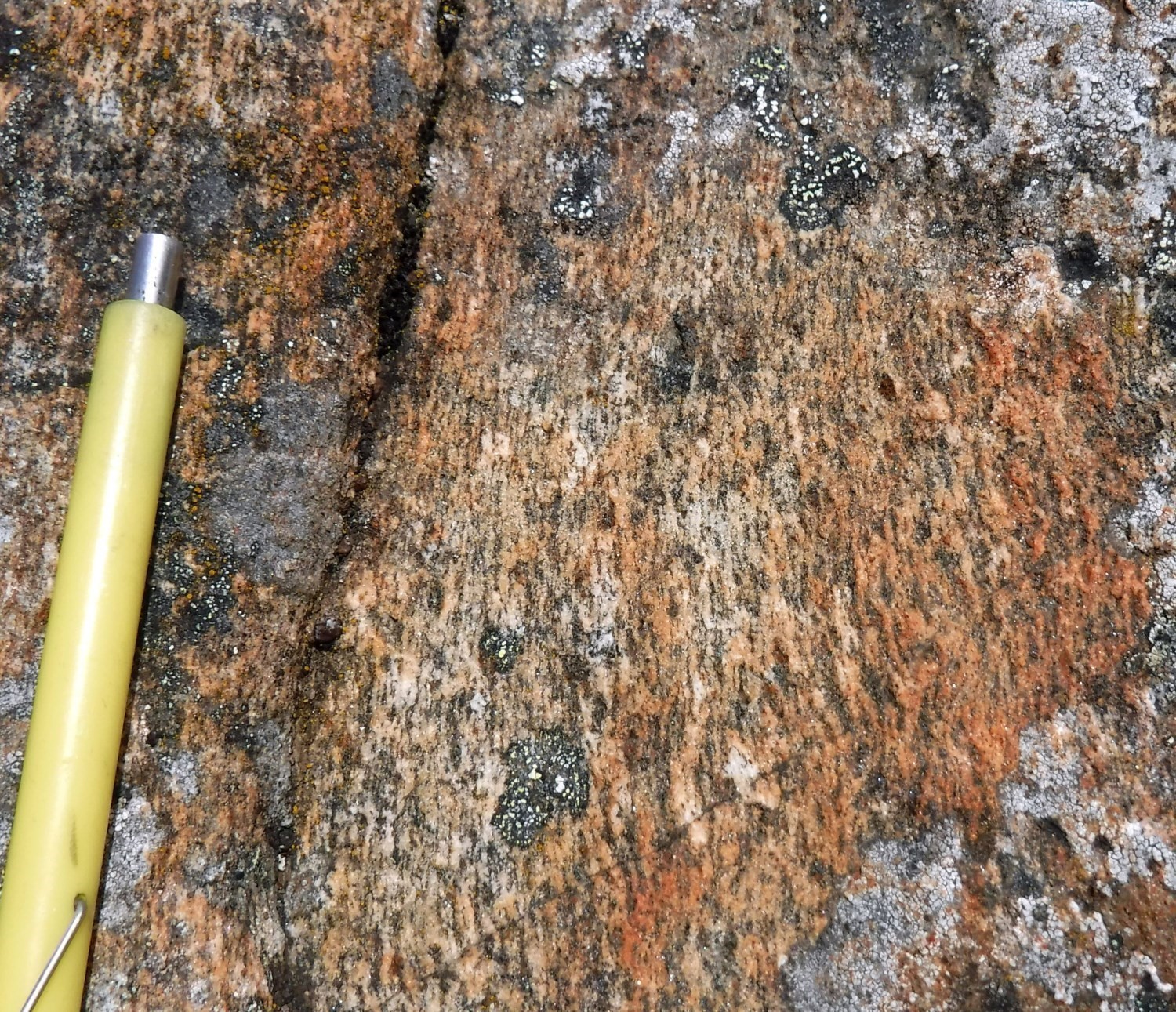 The Estre Complex comprises a unit of jotunite and hypersthene diorite characterized by strong magnetism and a quartz content ≤5%. In fresh exposure, these rocks are greenish while the alteration patina is brownish to whitish beige. This unit differs from other units of the Estre Complex by a less well developed gneissic texture, being generally well foliated and speckled in appearance. Ferromagnesian minerals (25-30%) are, in order of importance, clinopyroxene, orthopyroxene, biotite and hornblende. Near these, retrograde chlorite is locally present. Accessory minerals are magnetite, apatite and epidote.

The Estre Complex is mainly distributed along the coast of the Hudson Strait. It forms a U-shaped structure open towards the NE, within which also occur metasedimentary rocks of the Erik Cove Complex and gabbronorite of the Pingasualuit Complex. The maximum thickness of the Estre Complex is ~8 km. A few hectometre to kilometre-thick klippes of granulitic gneiss also occur further west, in the Derville River area. Unit ApPete4 is spatially associated with a positive circular magnetic anomaly 3 km in diameter. All rocks of this unit were observed within this geophysical anomaly.

Parrish (1989) reports having dated three samples of granulitic orthogneiss in areas now assigned to the Estre Complex. According to these results, the gneiss’ age of emplacement is uncertain. Indeed, one of the samples contains a zircon core older than 2230 Ma. Zircons of igneous appearance would also have crystallized at 1830 ±2 Ma and 1835 ±1 Ma. All samples show overgrowth or zircons of metamorphic origin. These would have crystallized between 1830 Ma and 1825 Ma. This age difference between igneous and metamorphic grains is suspect. Given intense metamorphism undergone by this unit at ~1830 Ma, it is plausible that zircons crystallizing from the anatectic liquid were confused with zircons crystallizing during the emplacement of the protolith.

The contact between granulitic gneiss of the Estre Complex and metasedimentary rocks of the Erik Cove Complex was observed on a few outcrops (19-MV-1125, 19-MV-1132 and 19-MV-1134). The contact is systematically transposed into gneissosity and sharp. On outcrop 19-MV-1134, a ductile shear zone with reverse movement marks the contact. This shear zone is 2 km to 4 m thick and results in the Estre Complex overthrusting the Erik Cove Complex southward. The contacts with other units of the Narsajuaq Lithotectonic Domain were not as well defined. Despite this, it is plausible that mafic rocks of the Pingasualuit Complex intruded gneiss of the Estre Complex and were then transposed into gneissosity. The same is true for the Navvaataaq Suite, which is spatially associated with granulitic gneiss of the western part of the Sirmiq Lake area (Vanier and Lafrance, 2020).