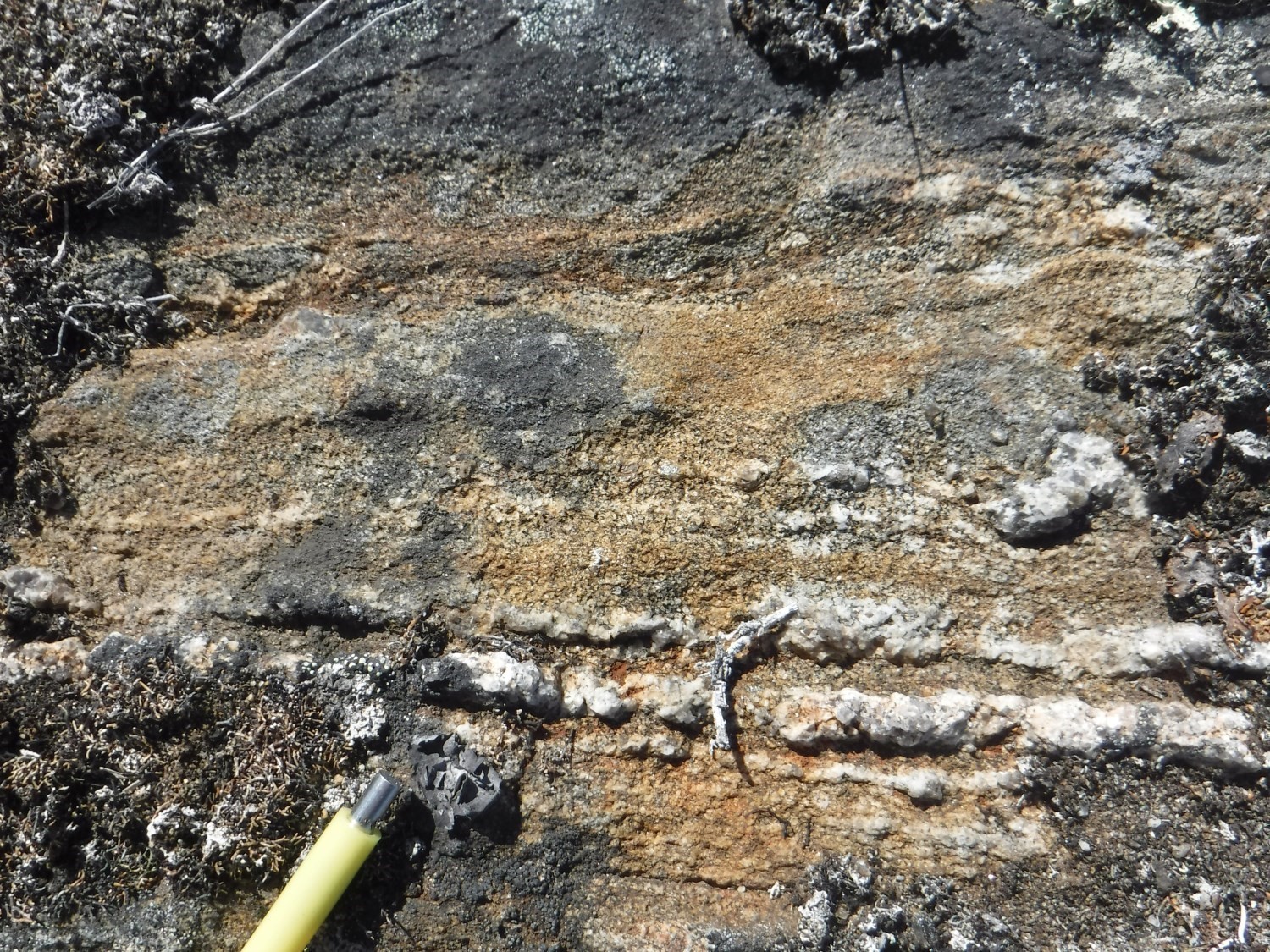 The Erik Cove Complex was introduced by Charette and Beaudette (2018) to describe metasedimentary rock units and associated migmatites of the Narsajuaq Lithotectonic Domain. This complex was also recognized in the Sirmiq Lake area and up to the Hudson Strait shoreline (Vanier and Lafrance, 2020).﻿ Prior to the work of Charette and Beaudette (2018), these units were assigned to the Sugluk Group (Lucas and St-Onge, 1991). However, (1) the high degree of metamorphism of these metasedimentary rocks, characterized in particular by the loss of primary structures, (2) amphibolite and granulite facies paragenesis, and (3) the presence of partial melting evidence, make the use of the group rank inappropriate in the context of the North American Stratigraphic Code (NACSN, 1983, 2005; MERQ, 1986). Furthermore, Charette and Beaudette (2018) considered it appropriate to abandon the term Sugluk, which already refers to other tectonic entities in the area (e.g., Sugluk Shear Zone and Sugluk Block), in favour of the “Erik Cove Complex” which includes not only paragneiss, but also migmatites and anatectic graniteconsidered derived from its melting.

The unit name comes from a cove located 30 km NE of Ivujivik village.

The Erik Cove Complex consist of variably migmatized metasedimentary rock klippes that have been divided according to partial melting rate and orthopyroxene occurrence. Unit pPecv1 consists of slightly migmatitized biotite ± garnet banded paragneiss that locally includes iron formation layers, and that forms large kilometric strips of more sandy composition in the northern part of the Narsajuaq Lithotectonic Domain (pPecv1a). Units pPecv2 and pPecv3 consist of metatexite and diatexite respectively. Areas with more significant amounts of mobilisate occurring as zones and injections in paragneiss are grouped into unit pPecv4. In the Sirmiq Lake and Salluit Fjord areas, quartzite (pPecv5) and iron formation (pPecv6) units were also recognized. 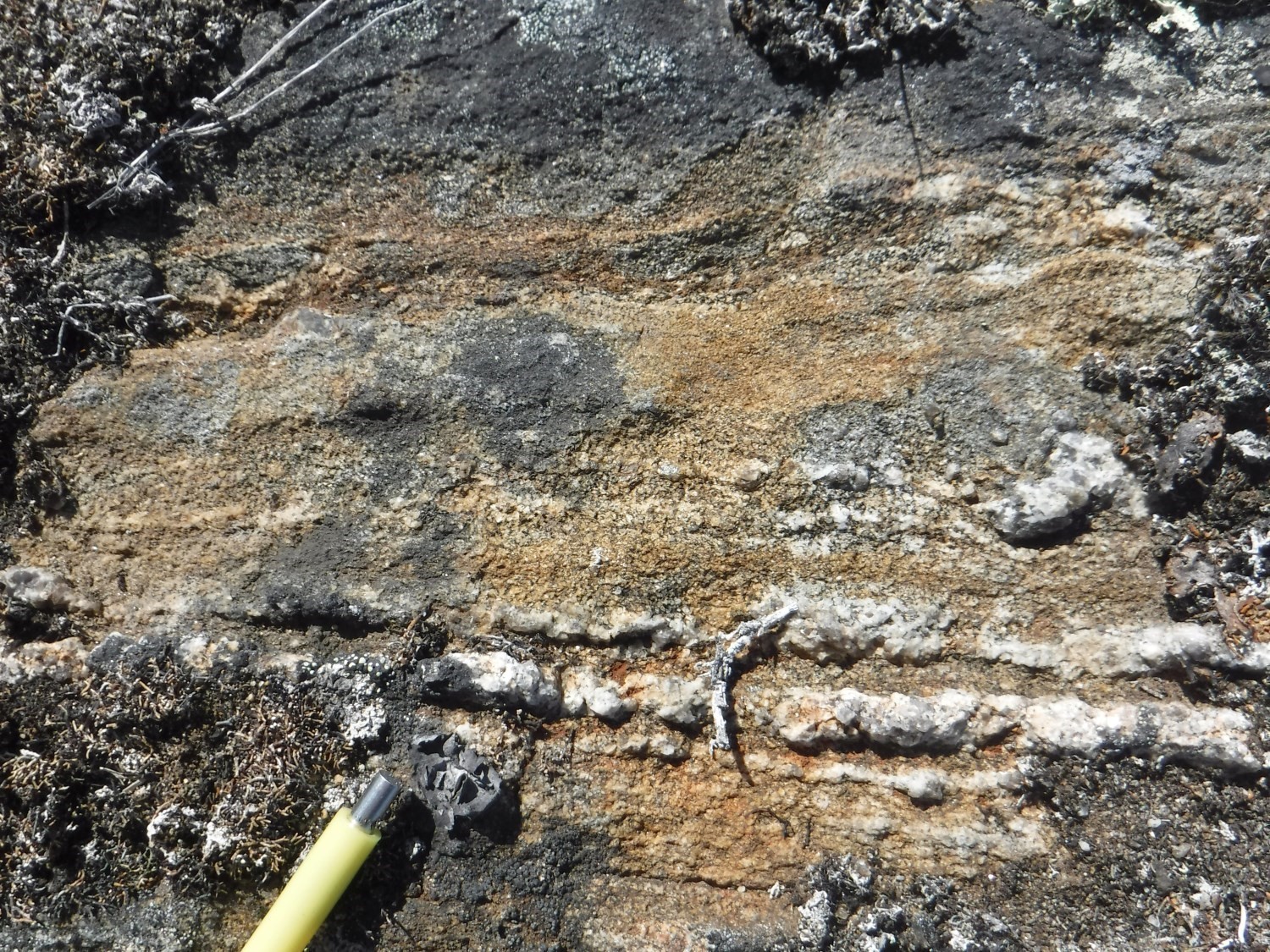 Unit pPecv1 is a dominant facies of Erik Cove Complex metasedimentary sequences. Paragneiss of this unit is generally not very migmatized, although it may contain some decimetric to metric  metatexite or diatexite﻿ layers or zones. On some outcrops, compositional banding is characterized by variations in ferromagnesian mineral and quartz contents, as well as the presence of garnet, sillimanite, graphite or sulphides. In places, banding is also characterized by grain size variations or by the presence of centimetric to decametric layers of quartzite or quartz-rich metasedimentary rocks. Dioritic or gabbroic layers are also locally present in sharp contact within paragneiss, and are boudinaged in places.

Paragneiss of unit pPecv1 contains 5-20% whitish leucosome as bands or millimetric to centimetric clusters in diffuse contact. These are generally coarser grained than the matrix, ranging from fine to medium grained, and locally include garnet porphyroblasts and thin biotite layers or clusters. According to the petrographic study of collected samples, the K-feldspar content of paragneiss is generally low iand the latter varies from psammitic to semi-pelitic. Pelitic beds are present locally. Biotite is the main ferromagnesian mineral and has variable contents (15-40%). In places, this mica is brownish red, indicating that high temperature conditions have been reached. If present, garnet occurs as porphyroclasts, locally fractured or elongated in foliation. The garnet content is generally <10% but can reach 30% in some layers. The quartzofeldspathic matrix is well recrystallized and, close to shear zones, has a preferential orientation and quartz bands. Locally, some amphibole is present in paragneiss. Also, orthopyroxene is locally observed in the mineral assemblage and indicates granulite facies﻿ metamorphic conditions. Accessory minerals include muscovite, chlorite, carbonates, sulphides, graphite, while trace minerals are apatite, allanite, zircon, and monazite. 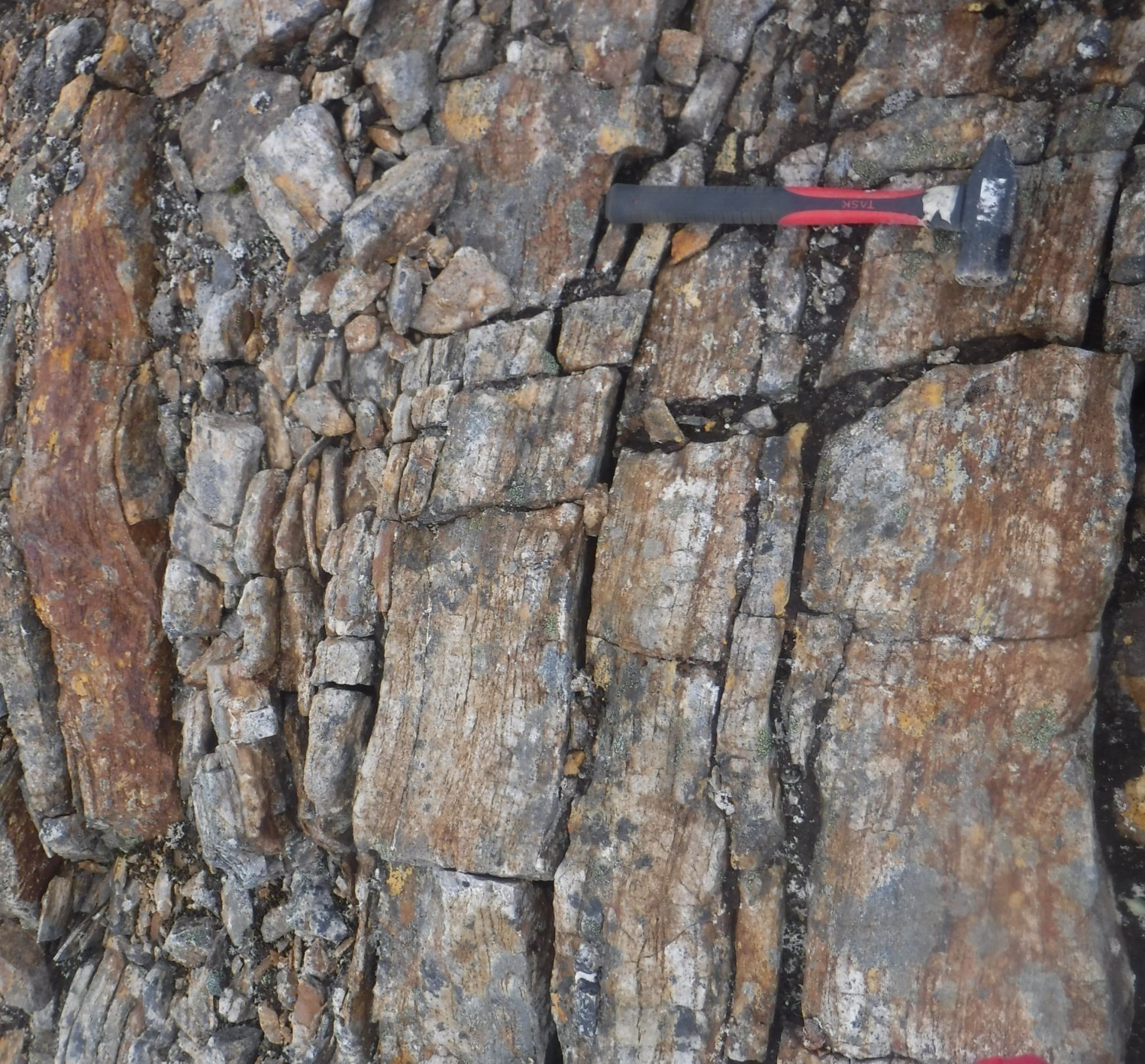 In the NW part of the Narsajuaq Domain, two broad kilometric strips of metasedimentary rocks are distinguished from unit pPecv1 by their greater thickness, the presence of rusty to purplish graphite-pyrite-pyrrhotite layers, and a locally potassic composition, usually more psammitic to sandy. These rocks have been assigned to subunit pPecv1b. Metasedimentary sequences of this subunit are cut by numerous whitish leucoratic intrusions locally containing lilac garnet porphyroblasts. These intrusions generally account for 10-40% of outcrops and are subconformable with or cut the metasedimentary host’s fabric. 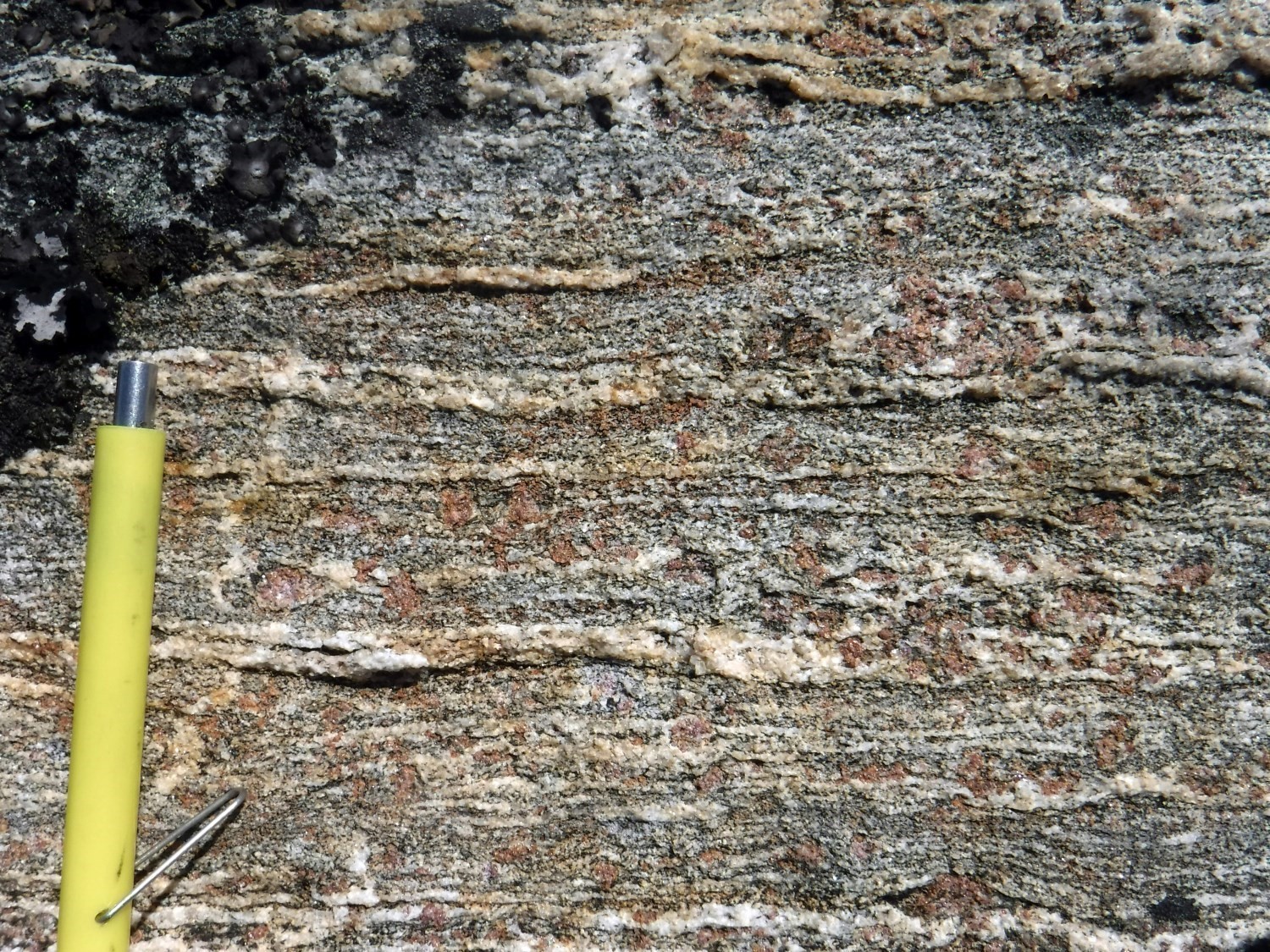 Areas where paragneiss is more migmatitized have been grouped into unit pPecv2. The rock comprises 20-35% whitish leucosomein millimetric to centimetric bands. Typically, metatexite is distinguished from unit pPecv1 paragneiss by a more banded appearance which produces locally a stromatic texture. Leucosome bands are folded in the metatexite foliation and are locally boudinaged. The leucosome is also concentrated in decimetric layers or zones that are conformable to or cut foliation. It is usually associated with pinkish to lilac garnet porphyroblasts (<20%) and biotite clusters or schlierens. Garnet is rimmed by biotite locally. The dominant metamorphic assemblage includes garnet, biotite and in some cases sillimanite. The content of the different minerals is highly variable, even at the outcrop scale; for example, ferromagnesian minerals vary from 15% to 35%. The quartz content is also variable and can be <20%.﻿ Like unit pPecv1 paragneiss, compositional variations and intermediate to mafic layers are observed in unit pPecv2 metatexite. 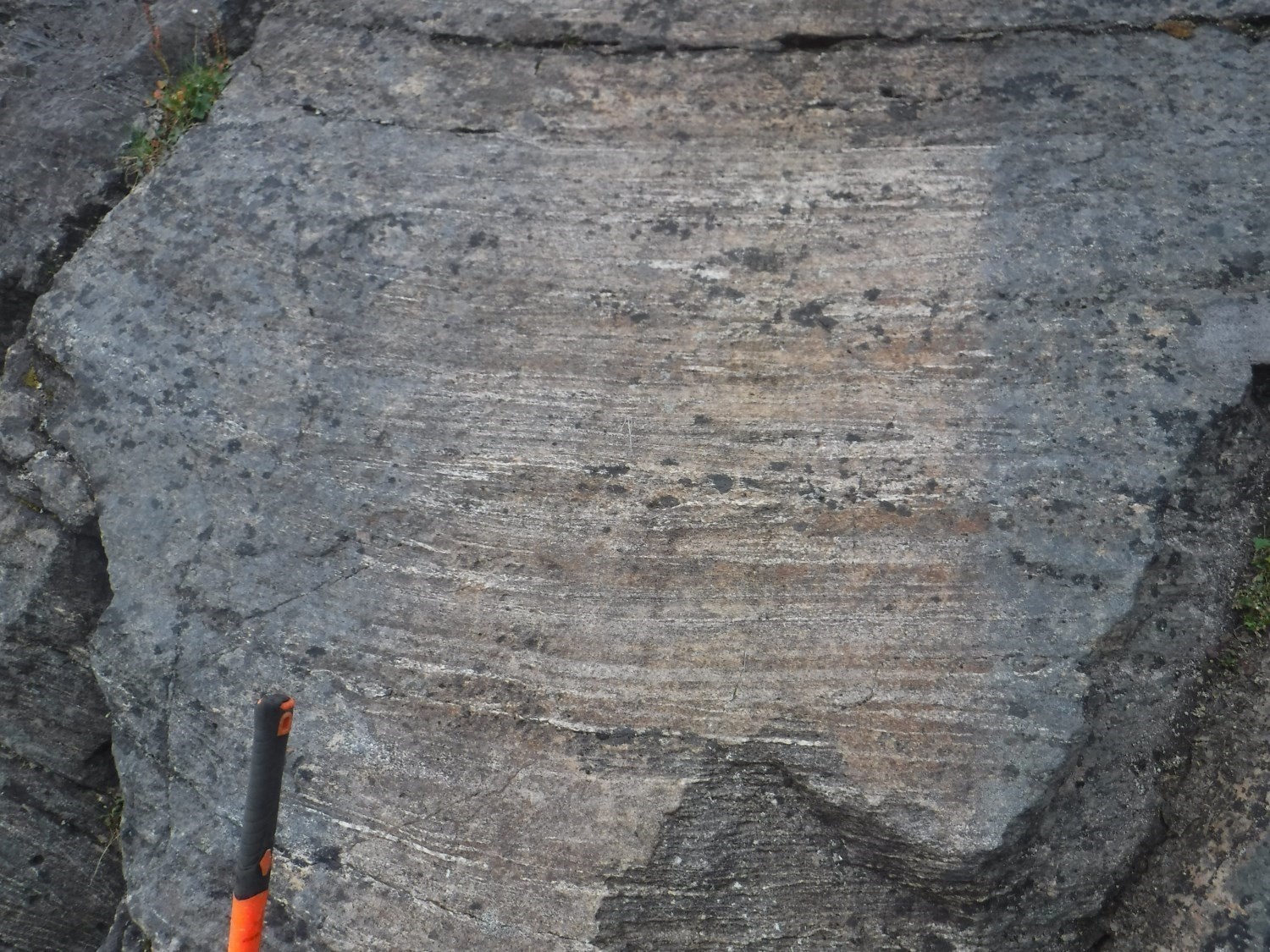 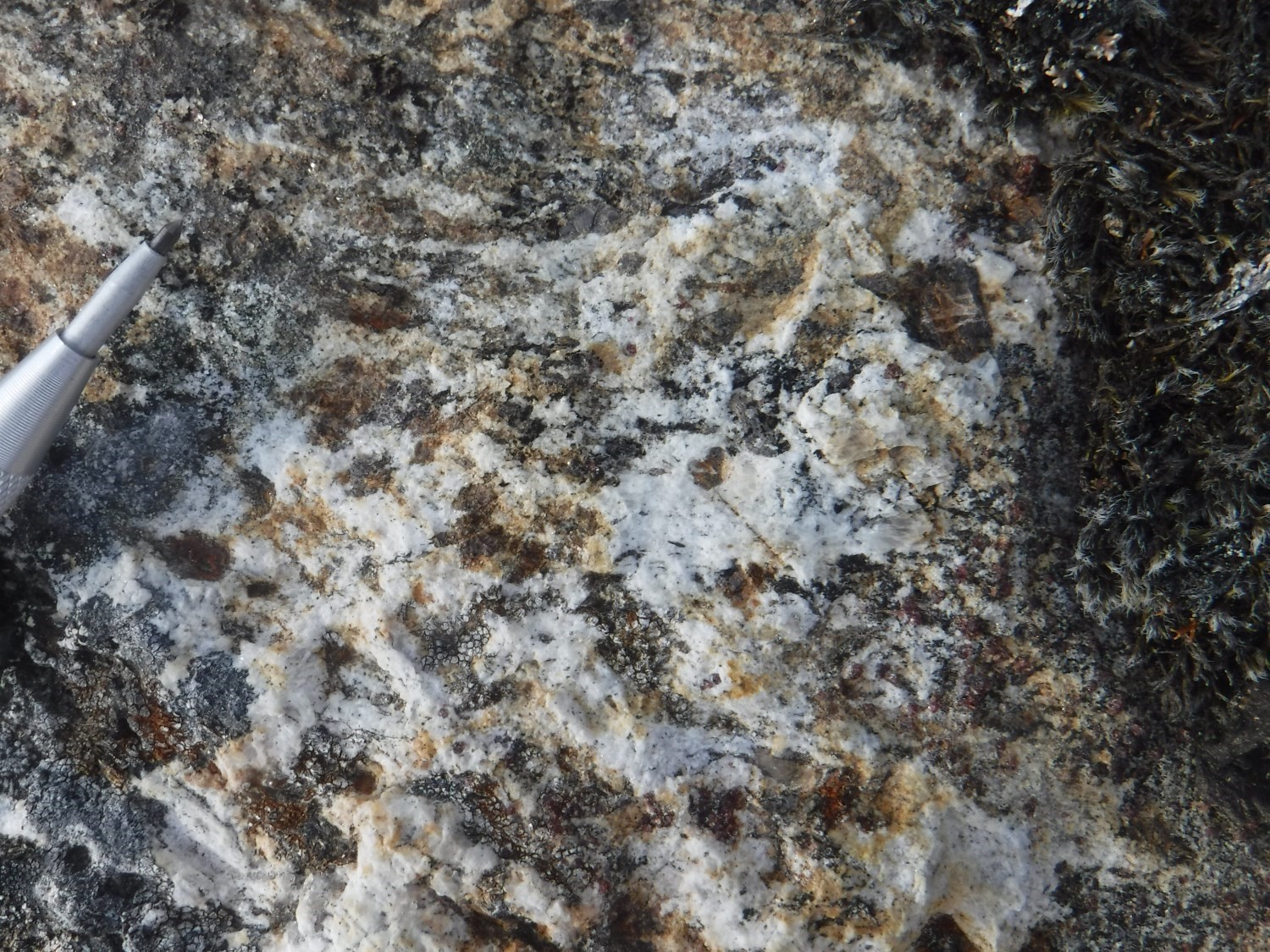 The presence of orthopyroxene in subunit pPecv2a metatexite is what distinguishes it from unit pPecv2. The rock is brownish beige in altered patina and greenish grey in fresh exposure. Orthopyroxene is more readily observable in mobilisate bands, where it forms coarser millimetric grains.

On a microscopic scale, there is development of amoeboid coarse quartz grain bands that regularly form pin textures with biotite. Chessboard extinction is also commonly observed in quartz. Metamorphic minerals observed in thin sections are biotite, garnet, orthopyroxene, sillimanite (fibrous and prismatic), cordierite and spinel. The latter two are present in the same samples that do not contain orthopyroxene and occur as inclusions or symplectites with garnet. Biotite and garnet show disequilibrium textures. More commonly, it consists of irregular-shaped biotite, which is characterized by the presence of corrosion gulfs and anatectic liquid pseudomorphs forming irregular spots. Sparsely, these biotite grains are also in contact with orthopyroxene. This type of disequilibirum textures suggests that biotite has been destabilized to produce anatectic fluid and orthopyroxene.

Garnet may also contain inclusions with optical continuity and edges along garnet’s crystalline faces, suggesting that they correspond to pseudomorphs of anatectic liquid. Biotite is also present as symplectites with quartz. Biotite then forms euhrdral laminae with which quartz bands of similar thickness alternate. These symplectites are located near orthopyroxene and are therefore the product of a retrograde reaction during crystallzation of anatectic liquid in a residual phase (Sawyer 2008). All of these textures support the hypothesis of partial melting of this unit and a peak metamorphic assemblage including orthopyroxene, garnet, biotite, anatectic fluid and, more locally, sillimanite. Unit pPecv3 consists generally of paleosome raft diatexite (schollen diatexite) or schlieren diatexite as classified by Sawyer (2008). It is whitish to rusty brown in altered surface with variable amounts of biotite-garnet schlierens (5-20%). Sillimanite is also observed locally. Better preserved centimetric to decimetric paragneiss rafts occur in diffuse contact and in varying amounts within diatexite. Textures observed are similar to that of metatexite. Among other things, biotite also has an irregular form. Garnet is porphyroblastic and subhedral. The mineral assemblage at peak metamorphism includes orthopyroxene, garnet and locally spinel.

Unit pPecv4 includes a significant amount of whitish intrusive material interpreted as anatectic granite-type mobilisate. This mobilisate occurs as whitish zones and injections that can occupy 50-75% of the outcrop surface. Pink to lilac garnet is visible locally. Paragneiss occurs in places as diffuse layers or enclaves within anatectic granite. 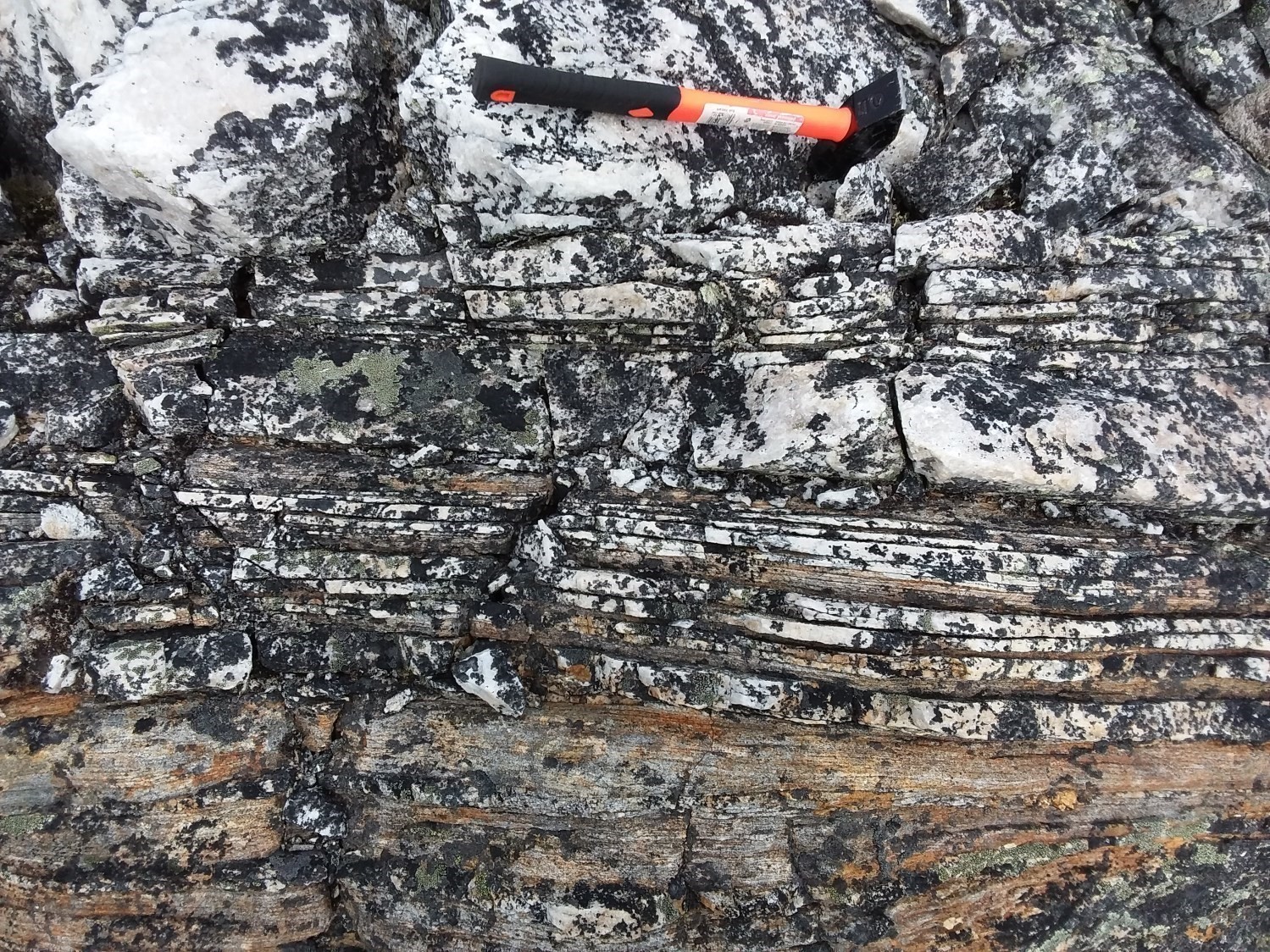 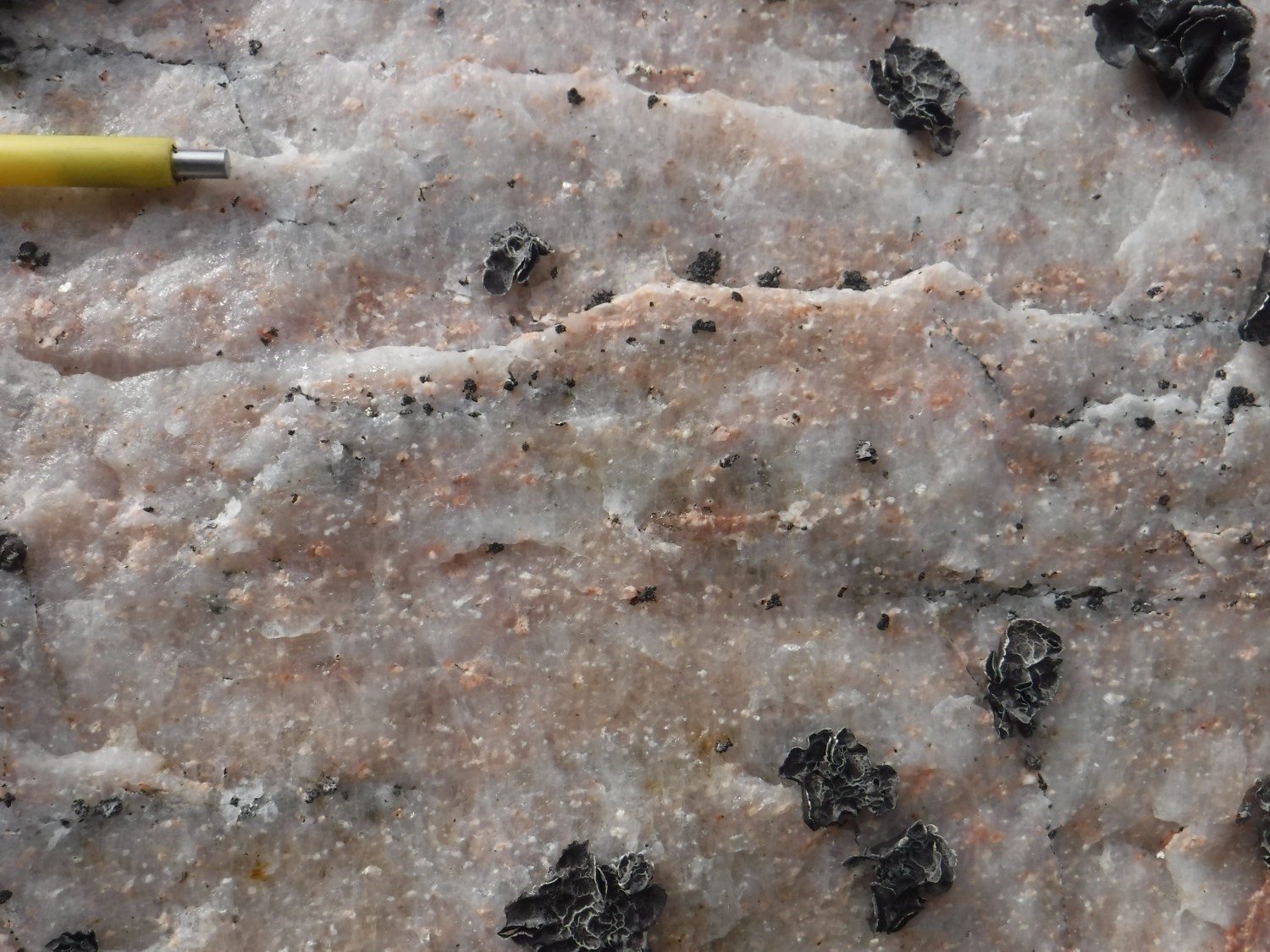 In the Sirmiq Lake area and up to Hudson Strait, quartzite beds were observed in the Erik Cove Complex metasedimentary sequence. Centimetric to decimetric quartzite beds are often interstratified in subunit pPecv2a. Quartzite is white in altered surface and composed of ≥85% quartz. Some beds contain almost 10% plagioclase and K-feldspar. Metamorphic minerals present are biotite, garnet and sillimanite. Garnet is euhedral and only observed locally. Sillimanite is fibrous or as inclusions in quartz. The latter forms amoeboid coarse grains that commonly have chessboard extinction.

Iron formation occurs in decametric to metric klippes within Navvaataaq Suite enderbite, Pingasualuit Complex gabbronorite, or unit pPecv1 paragneiss. It includes different facies in sharp or gradual contact with each other. Although centimetric to decimetric bands of semi-massive magnetite were observed locally, primary banding of iron formation was generally not preserved. In all cases, rocks are medium to coarse grained, partially granoblastic, and have an heterogranular and interlobe microfabric. 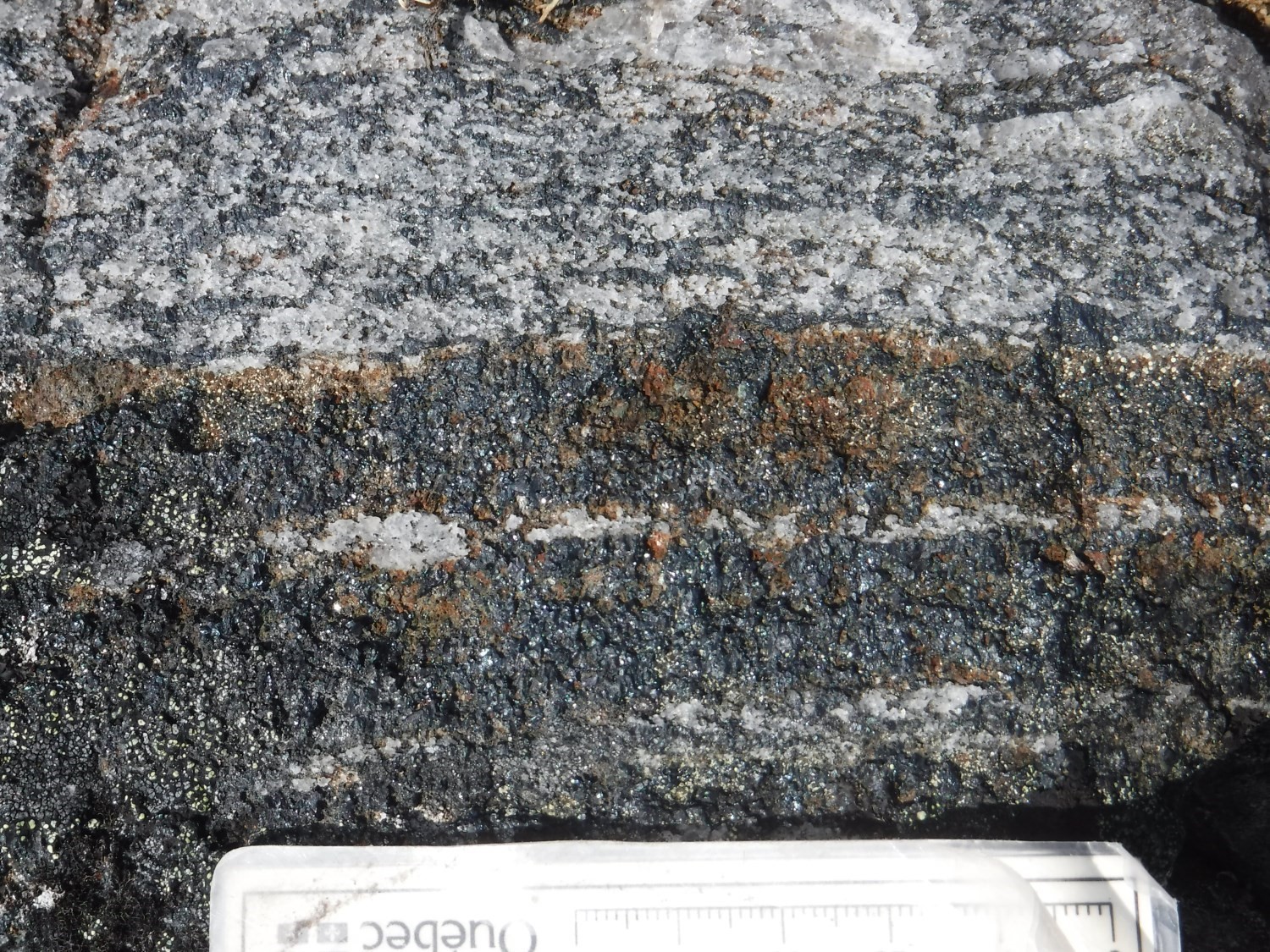 The main facies is mostly composed of quartz (50-65%) and magnetite (25-40%) both marking foliation. Orthopyroxene (<15%) and apatite (<2%) are commonly present, while clinopyroxene (<14%), garnet (<3%), amphibole (<2%) and ilmenite (<1%) are only observed locally. Quartz is amoeboid and forms lenses or bands having undulatory, subgrain extinction. Pyroxene is nematoblastic and magnetite is zoned in places (Delobel, 2020). When present, garnet rims magnetite, and ilmenite is disseminated or forms exsolution networks within magnetite. 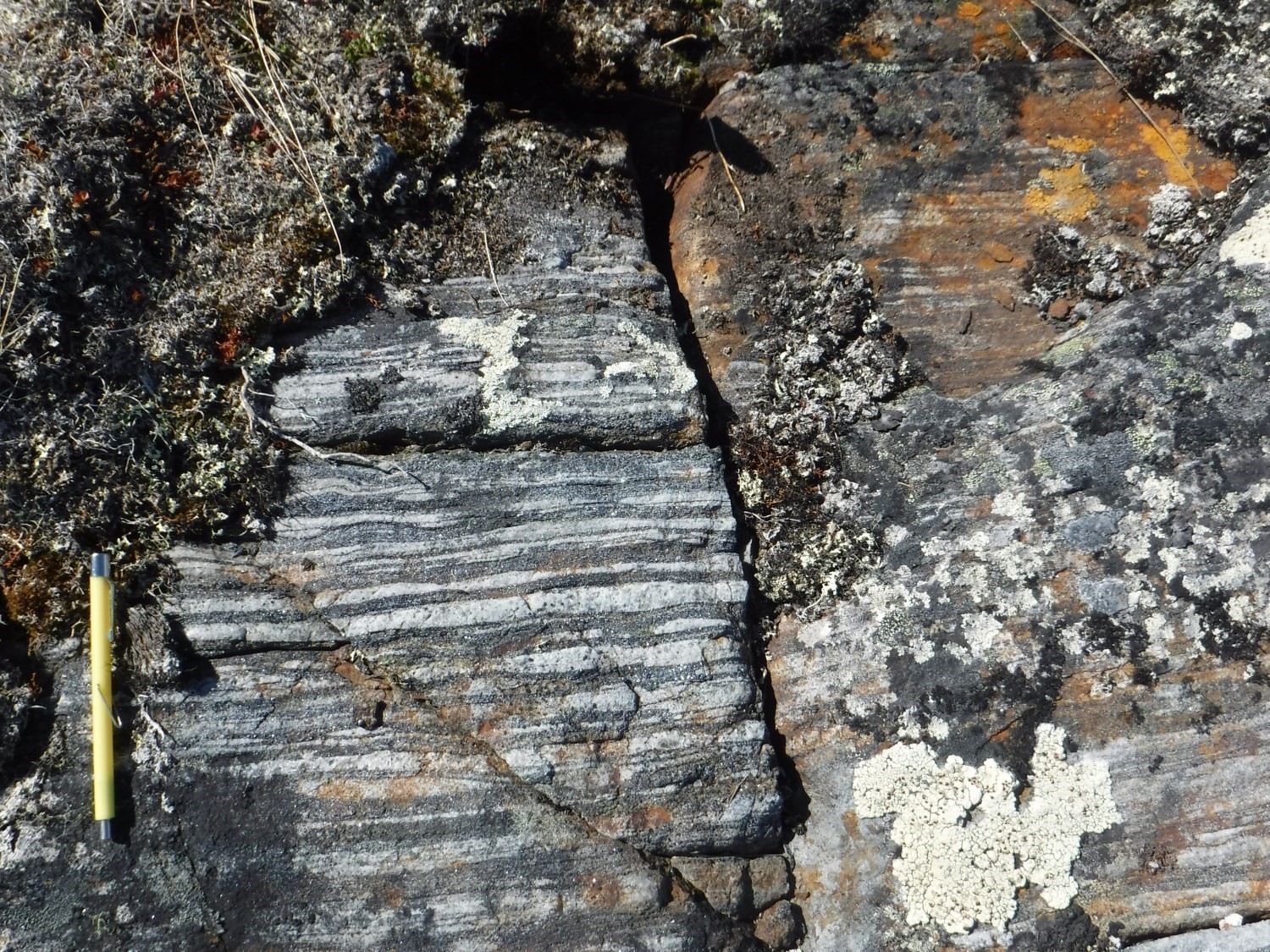 The second most common facies contains lower contents of quartz (20-35%) and magnetite (5-10%) and is dominated by orthopyroxene (37-71%). Clinopyroxene (<5%), amphibole (<5%) and apatite (<1%) are also present. Foliation is marked by pyroxene and quartz. The latter forms bands having subgrain extinction and a texture indicating recrystalization by grain edge migration. Other iron formation facies are less abundant and include layers richer in clinopyroxene (<35%) and/or garnet (<10%). Locally, olivine can also represent up to 35% of the mineral phases. Analysis of four polished thin sections with the electron microprobe verified the mineral composition of samples coming from different iron formiation facies (Delobel, 2020). Silicate minerals are all ferriferous and have a typical composition of granulite facies metamorphic iron formations (Klein, 2005). Results from Delobel (2020) indicate that orthopyroxene consists of ferrosilite, clinopyroxene consists of ferro-augite (close to the hedenbergite field), garnet is almandin, amphibole consists of ferro-tschermakite and olivine is close to the fayalite pole (96.8%).

The Erik Cove Complex forms decametre to kilometre-large (<5 km) strips and klippes within the Narsajuaq Domain. Strips have lateral continuity up to 50 km. The thickest klippes are located near the Sugluk shear Zone and north of the Naujaat Shear Zone. Unit pPecv1 slightly migmatized paragneiss is concentrated north of the latter structure, whereas other units (affected by higher partial melting) are grouped in the southern half of the Narsajuaq Domain, near the boundary with the Kovik Lithotectonic Domain.

Several detrital zircons and rutile were dated using U-Pb method in a quartzite sample belonging to the Sugluk Group﻿ and taken north of Salluit Bay (sample Sugluk-4-87; Parrish, 1989). The oldest detrital zircon was dated to 2545 Ma, while the youngest zircon gave an age of 1830 Ma (Parrish, 1989). These ages indicate the source and age of metasedimentary rocks of the Narsajuaq Domain are diverse (Archean and Paleoproterozoic) and the maximum sedimentation age is 1830Ma. However, Parrish (1989) and St-Onge et al. (1992) points to the inconsistency of this date with events of late intrusion and granulite facies metamorphismthat affected the area between 1835 ﻿Ma and 1820 Ma. This geochronologic data suggests that rapid burial of sediments occurred, likely as a result of overthrusting of the various intrusive suites of the Narsajuaq Domain around 1830 Ma (Parrish, 1989; St-Onge et al., 1992).

A metamorphic age of 1719 Ma was obtained by Bracciali et al. (2013) on rutile grains from the same quartzite sample. This age suggests a long cooling period following the collisional metamorphism of the Ungava Orogenesis.

Sulphur isotope analyses were conducted by Bui et al. (in preparation) on ten samples of the Erik Cove Complex. A sample (17-MB-3025-A) gave results indicating fractionation of characteristic sulphur isotopes of sedimentary cycles in the Archean. Therefore, the possibility of the Erik Cove Complex including Archean sedimentary rocks is not precluded, but requires further sampling and diversification of analytical methods to be confirmed.

Variably migmatized metasedimentary rocks of the Erik Cove Complex are probably one of the oldest lithologies of the Narsajuaq Domain. They are incorporated into lithologies of the domain as imbricate klippes, particularly into the Estre and Pingasualuit complexes, and Navvaataaq Suite.