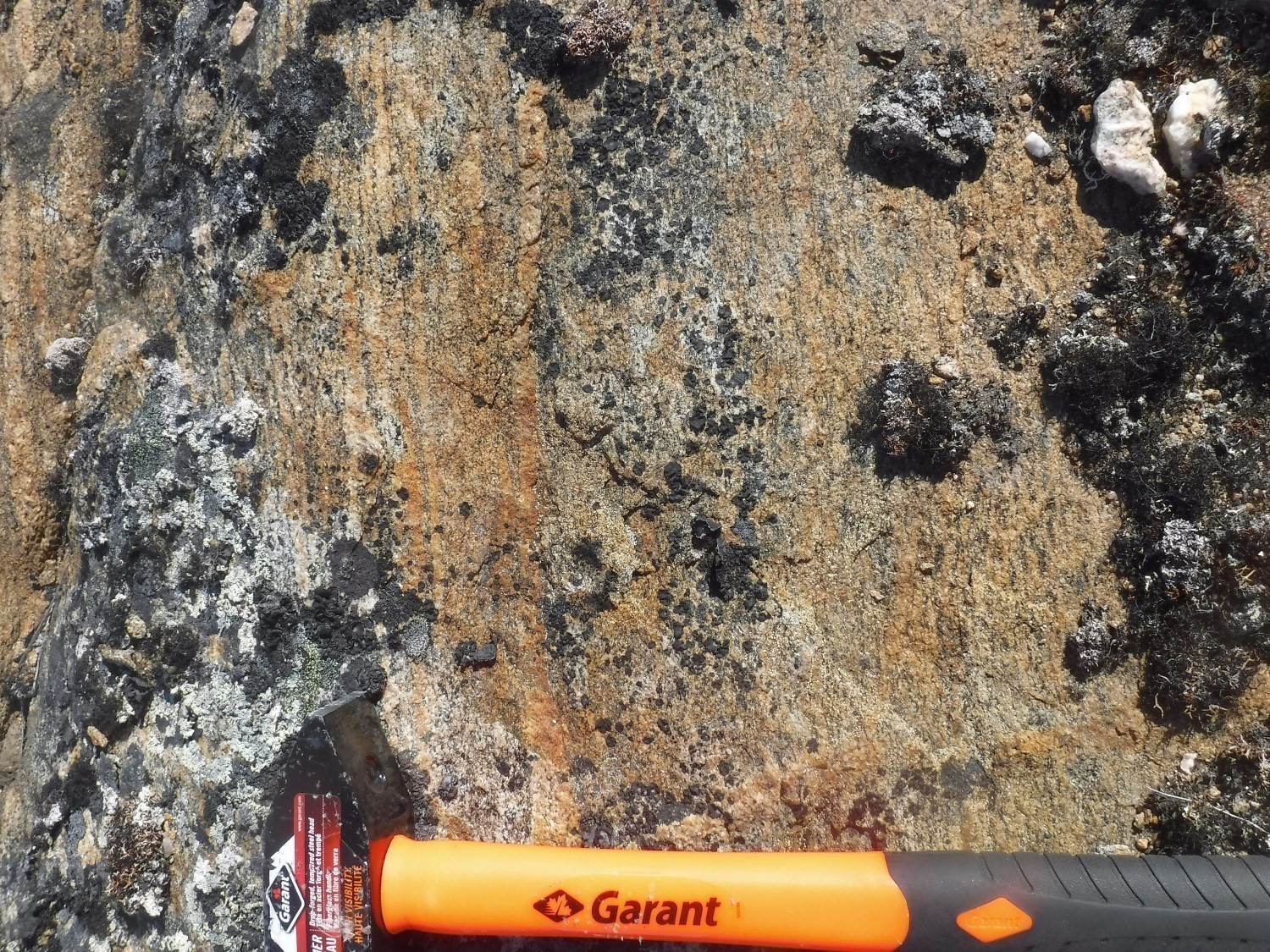 The Siurartuuq Suite was introduced by Charette and Beaudette (2018) to distinguish granoblastic, felsic and potassic granulitic rocks present in the Narsajuaq Lithotectonic Domain. Prior to their work, the majority of the lithologies in this suite were included in the younger plutonic arc suite (pPNAR4) described by St-Onge and Lucas (1992) and St-Onge et al. (1992). The name of the unit comes from Siurartuuq Lake, which is located in an area where these granulitic rocks are abundant.

The Siurartuuq Suite consists mostly of foliated to gneissic charnockite with a distinctive banded appearance (nAsir1). In the northern Narsajuaq Domain, a more homogeneous, non-banded facies was grouped into informal subunit nAsir1a. 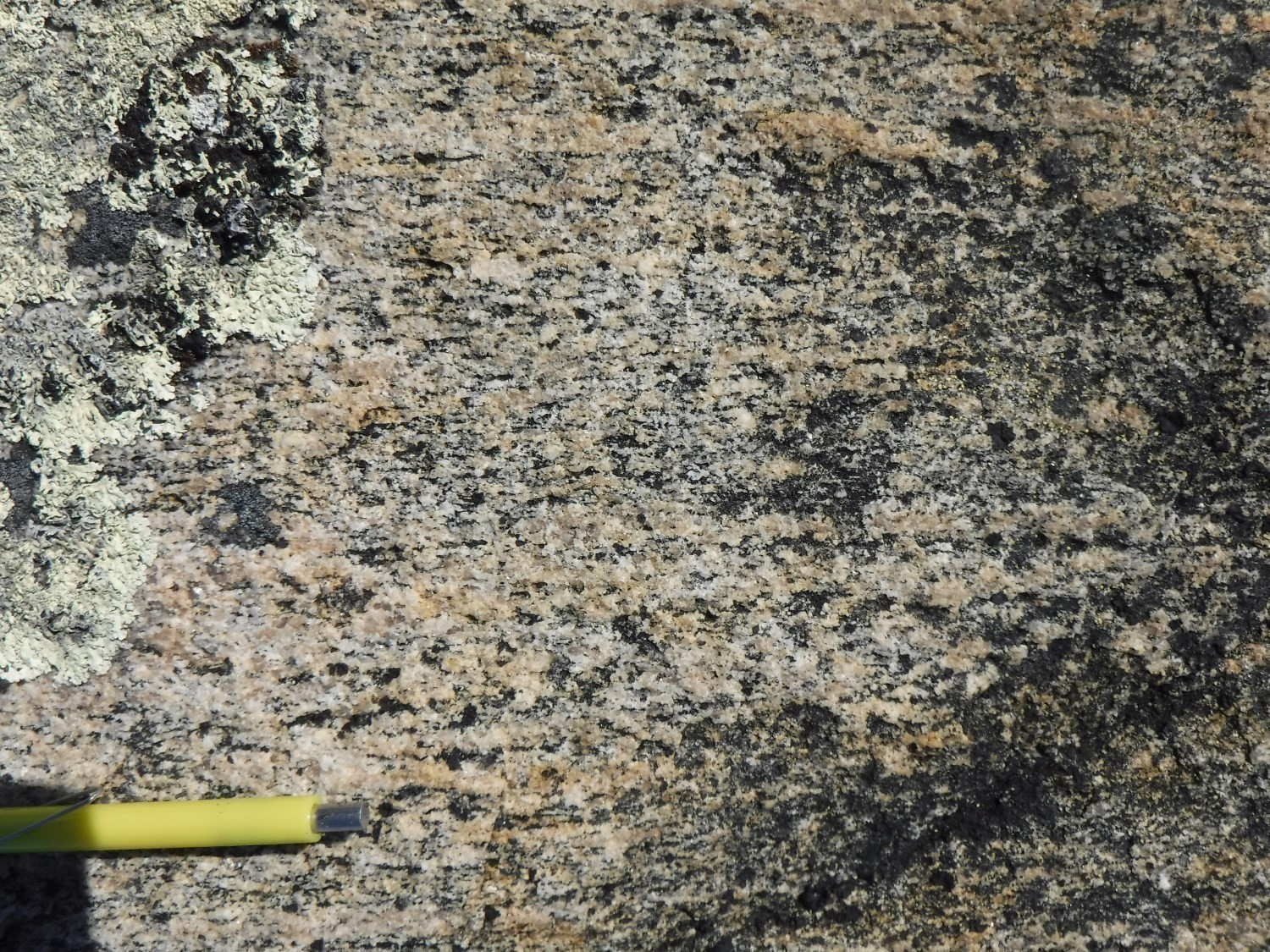 Charnockitic rocks of unit nAsir1 are fine to medium grained and have a brownish beige to pinkish brown patina. The granoblastic appearance and millimetric to centimetric banding are characteristic of this unit. Banding is produced by the presence of thin bands of ferromagnesian minerals and 10-25% of beige to pinkish 2 mm to 2 cm bands in diffuse contact with a fine-grained charnockitic matrix. These bands are medium grained, usually leucococratic and have a composition ranging from monzogranitic to syenogranitic. Locally, they include small clusters of ferromagnesian minerals that include orthopyroxene, hornblende and biotite. This banding is accompanied in places by a compositional variation of the fine-grained matrix that changes from tonalitic to syenogranitic in millimetric to centimetric bands. This compositional variation is accompanied by an altered surface colour variation ranging from brownish to greenish. Also, greyish layers or zones, without the characteristic colour of granulitic rocks, are in diffuse contact in charnockites. They are interpreted as retromorphosed zones since orthopyroxene is not observed in thin sections, but may have been retromorphosed or completely replaced by serpentine. In addition, unit nAsir1 locally includes centimetric to decimetric layers of quartz diorite or orthopyroxene diorite in sharp to diffuse contact.

Thin-section observations indicate that unit nAsir1 lithologies are weakly to strongly recrystallized and moderately deformed. Their matrix is slightly oriented and quartz zones are usually elongated in foliation. Unlike the matrix, coarser bands producing the banded appearance of unit nAsir1 have little or no recrystallization, but also have oriented quartz zones. Ferromagnesian minerals, which make up 5-20% of the rock, are present in thin discontinuous layerss or in lenticular clusters. These include biotite, orthopyroxene, hornblende and one or two pyroxenes. In places, these minerals produce banding marked by variations, either in the mineral phases present or in their proportions. Orthopyroxene is commonly found in fractured crystals, elongated in foliation and partially to completely replaced by serpentine or biotite. Cliniopyroxene is not always present in the mineral assemblage. When observed, it forms elongated crystals in foliation or occurs as relics in the core of hornblende. Biotite usually occurs as flakes and intergrowth with quartz. More rarely, it is seen as rosette in ferromagnesian clusters or replacing hornblende. Accessory ferromagnesian minerals, usually associated with thin ferromagnesian layers or clusters, include magnetic, chlorite, epidote and sphene. Trace minerals include apatite, allanite and zircon. 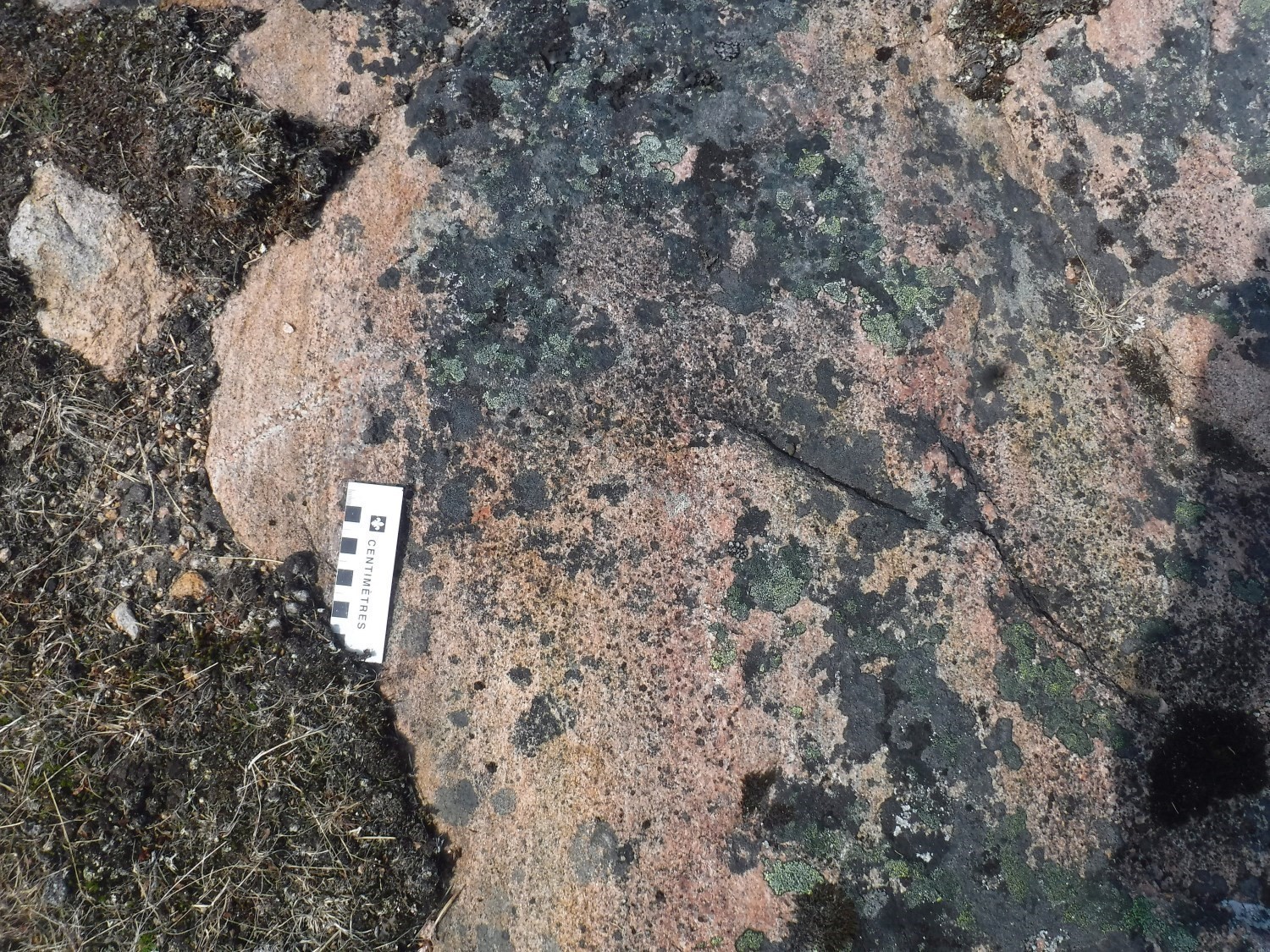 Subunit nAsir1a was introduced to distinguish kilometric zones of the Siurartuuq Suite that have a more homogeneous appearance and look like late intrusions of monzogranitic to synogranitic composition, weakly foliated and brownish grey-beige to brownish pink in altered surface. These include a fine-grained leucocratic phase as well as a coarser-grained hololeucocratic phase. These two phases are commonly observed in diffuse contact on the same outcrop. Although the brownish colour characteristic of granulitic rocks is observed in outcrop, the microscopic study indicates that orthopyroxene is not a constant part of the mineralogical assemblage. However, as with unit nAsir1, lithologies are recrystallized (albeit very weakly to moderately) and include clinopyroxene. The main ferromagnesian minerals, biotite and hornblende in addition to clinopyroxene and orthopyroxene in places, account for 5-15% of the rock. These are disseminated in the matrix or form thin layers marking foliation. In places, magnetite, epidote and sphene are present as accessory minerals.

The Siurartuuq Suite charnockite forms oblong masses and folded or elongated klippes following the E-W-oriented regional tectonic grain. A large mass of cartnockite from unit nAsir1 is present in the central-west portion of the Narsajuaq Domain and includes enclaves of intermediate to mafic granulitic rocks of the Pingasualuit Complex (nApgs). As for homogeneous charnockite and granite of subunit Nasir1a, they form kilometric masses in the northwestern portion of the domain.

The Siurartuuq Suite includes enclaves of hypersthene quartz diorite and hypersthene diorite of the Pingasualuit Complex (nApgs2). On outcrops associated with this complex, the Siurartuuq Suite charnockite intrudes as regular and conformable to subconformable layers within intermediate to mafic units. Granoblastic potassic rocks of the Siurartuuq Suite are in sharp to diffuse contact and are cut by enderbites and opdalites of the Navvaataaq Suite (pPnav). Field observations indicate that the Navvaataaq Suite (nAnav) is younger than granoblastic charnockites.