The Fargues Suite was introduced in the Sirmiq Lake area (Vanier and Lafrance, 2020) to group potassic intermediate intrusive rocks of the Narsajuaq Lithotectonic Domain.

The Fargues Suite is associated with a strong regional positive magnetic anomaly and comprises three units: 1) clinopyroxenite and melanocratic gabbro; 2) foliated syenite and mangerite; and 3) plagioclase porphyritic monzonite and syenite. 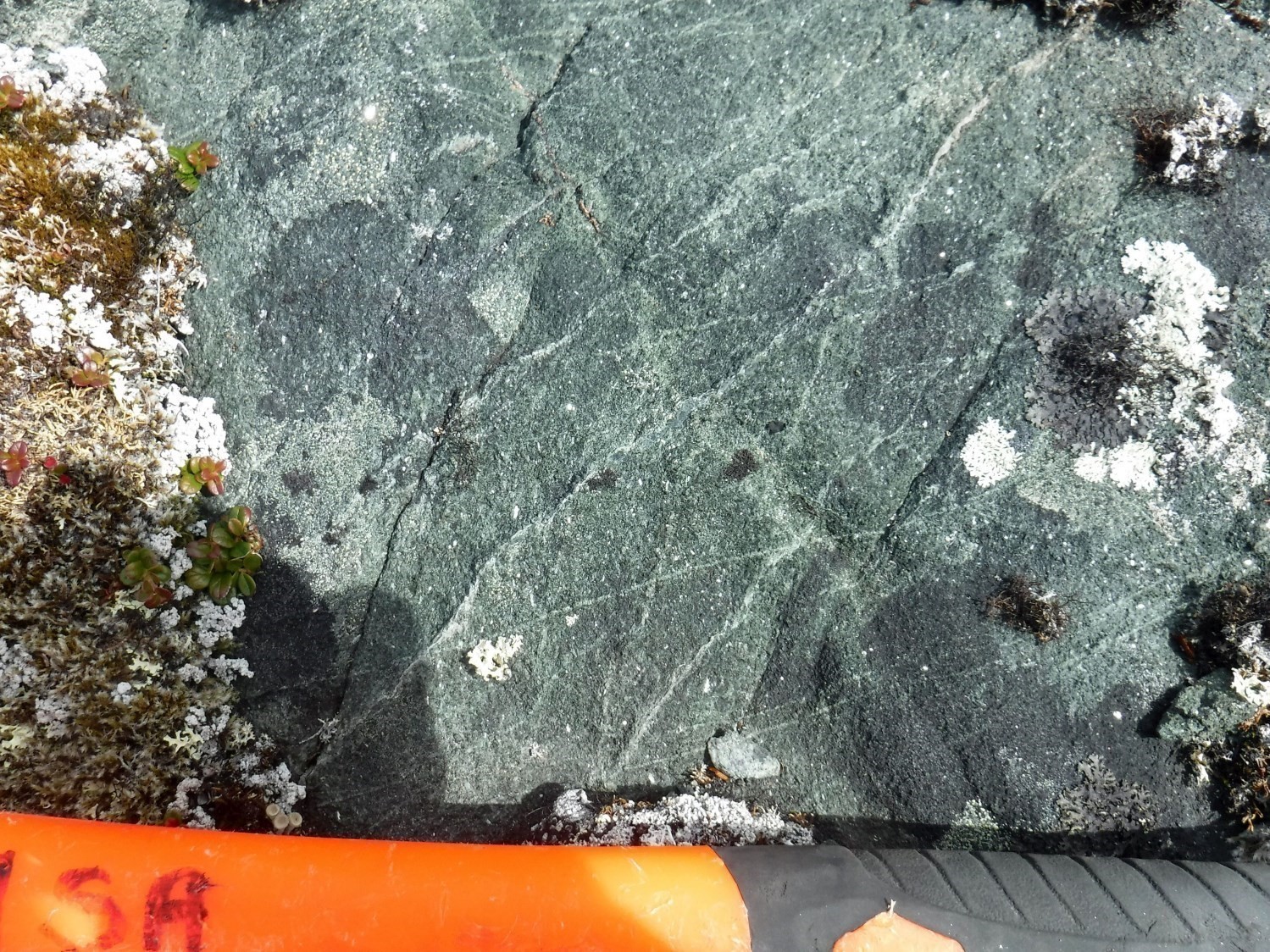 Unit ApPfag1 groups variably amphibolitized clinopyroxenite and melanocratic gabbro. These two lithologies are fine to medium grained and injected by syenite of unit ApPfag2, brecciating them locally. Pyroxenite is very dark green and contains 5-15% interstitial plagioclase clusters. It is magnetic, massive or slightly foliated, and commonly fractured. The amount of hornblende replacing clinopyroxene is variable (3-35 %) depending on the outcrop. In thin section, pyroxenite is heterogranular and not recrystallized. Generally green, hornblende forms brownish porphyroblasts (3-7 mm) in places. Locally, layers containing 10% red biotite flakes are present near the contact with syenite. This biotite forms non-oriented felts with undulatory extinction. 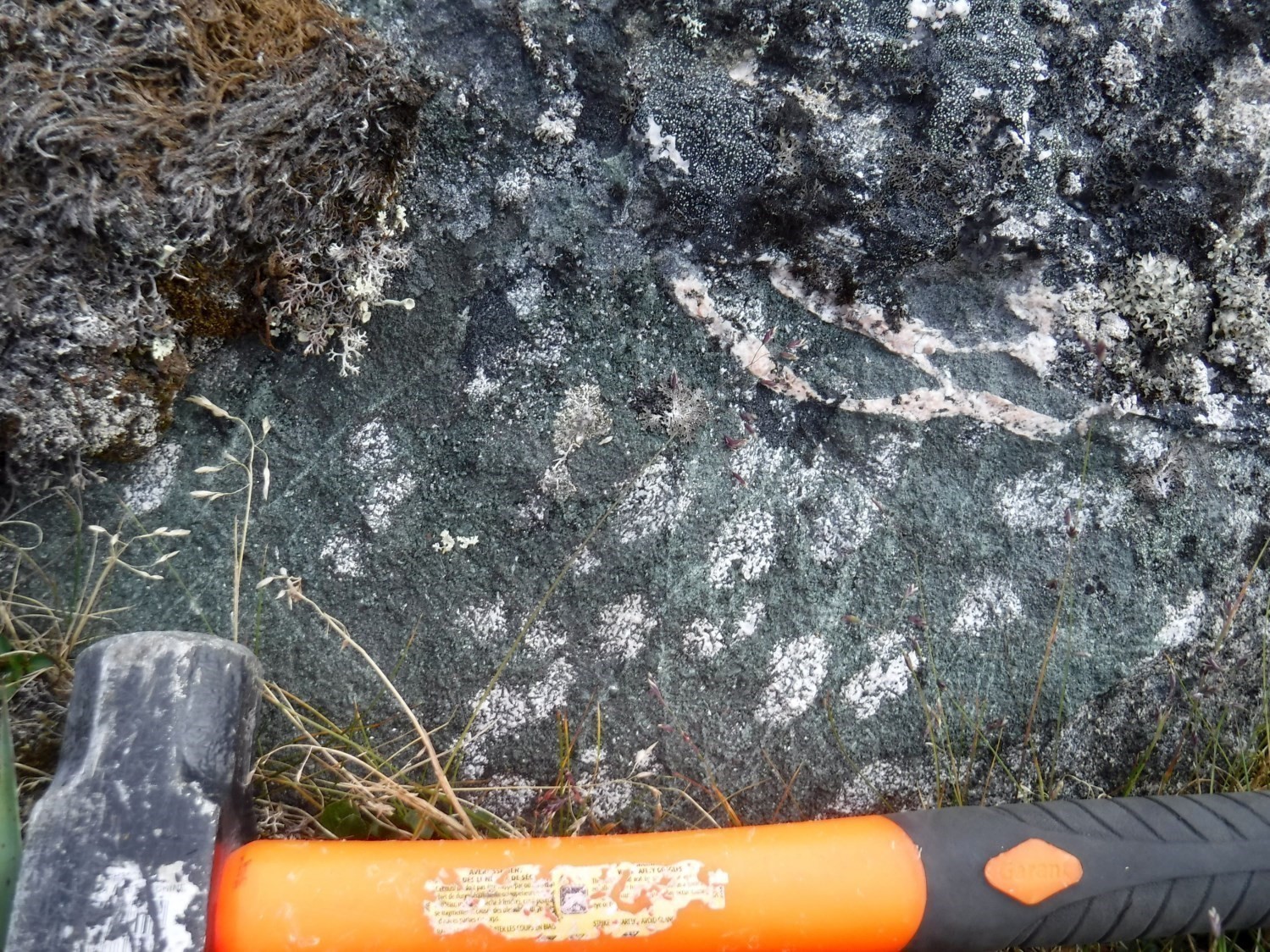 Gabbro is in diffuse contact with pyroxenite; locally, the latter seems to occur as decimetric enclaves within gabbro. Gabbro contains ~75% ferromagnesian minerals with a predominance of hornblende, which is slightly aligned in foliation. A plagioclase glomerophyric phase was also observed at the edge of pyroxenite. Opaque minerals, apatite, hematite, chlorite and carbonate are incidentally present in unit ApPfag1. 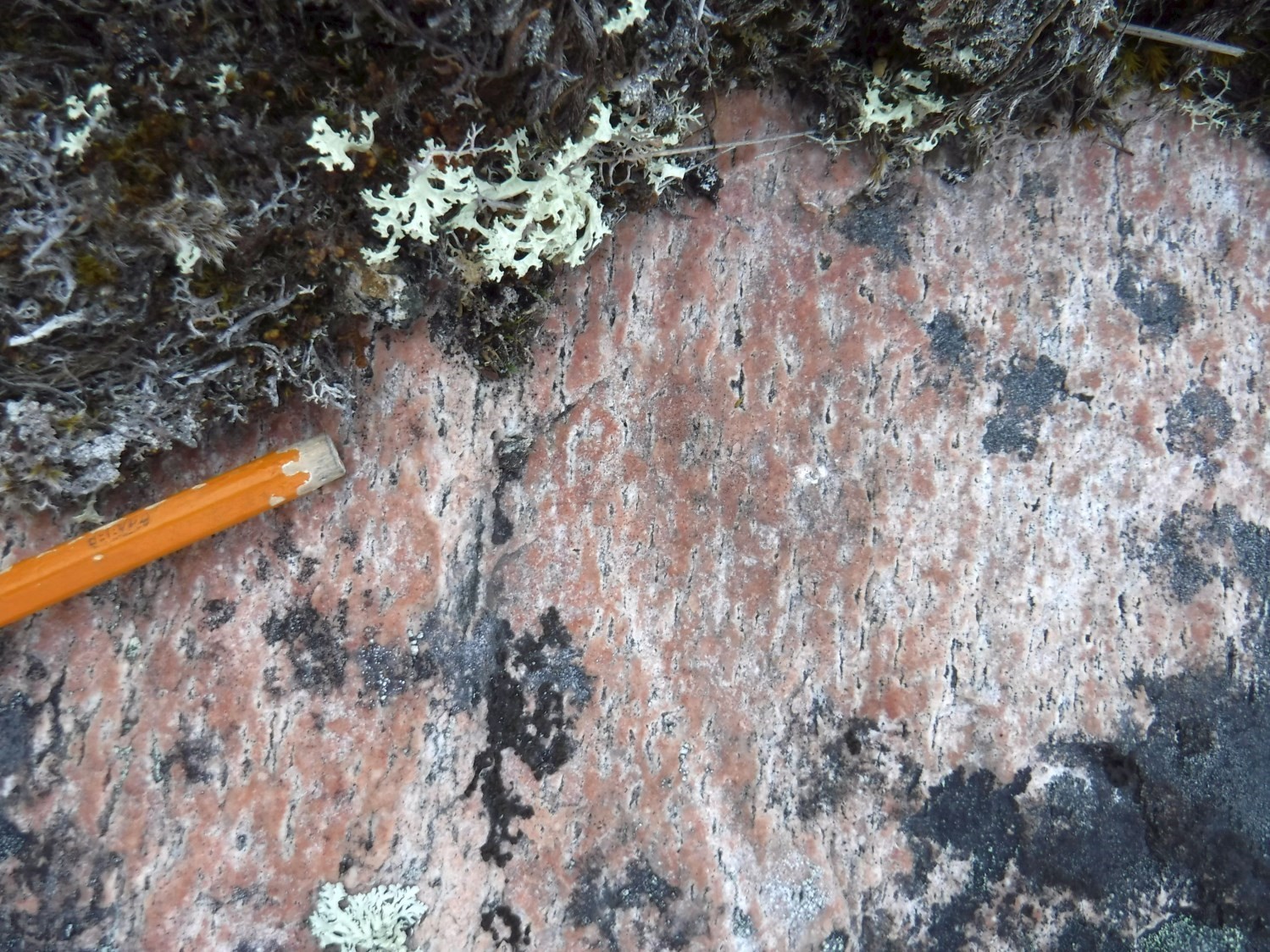 Syenite and mangerite are highly magnetic, very well foliated, even grained and fine grained. They contain little quartz (2-7%) as lenses or thin bands. In fresh exposure, syenite is pink while mangerite is dark greenish grey. These two lithologies are associated in outcrop and are only distinguished by the type of dominant ferromagnesian minerals (10-15 %). In mangerite, the main ferromagnesian mineral is hypersthene, whereas clinopyroxene or hornblende is dominant in syenite.

However, orthopyroxene strongly retrograded to biotite-quartz symplectites was observed in syenite thin sections, suggesting that this rock has been retrograded. K-feldspar (40-65%) includes microcline and perthitic orthose, the latter commonly forming larger crystals. It is heterogranular and interlobed with recrystallization by subgrain rotation. Plagioclase is concentrated at the edges of ferromagnesian minerals, which are strongly stretched in deformation or in lenticular clusters. Locally, biotite is chloritized, orthopyroxene is altered into a serpentine-chlorite assemblage and clinopyroxene is variably uralitized. Opaque minerals and apatite are common, while zircon and sphene are rather sparse. 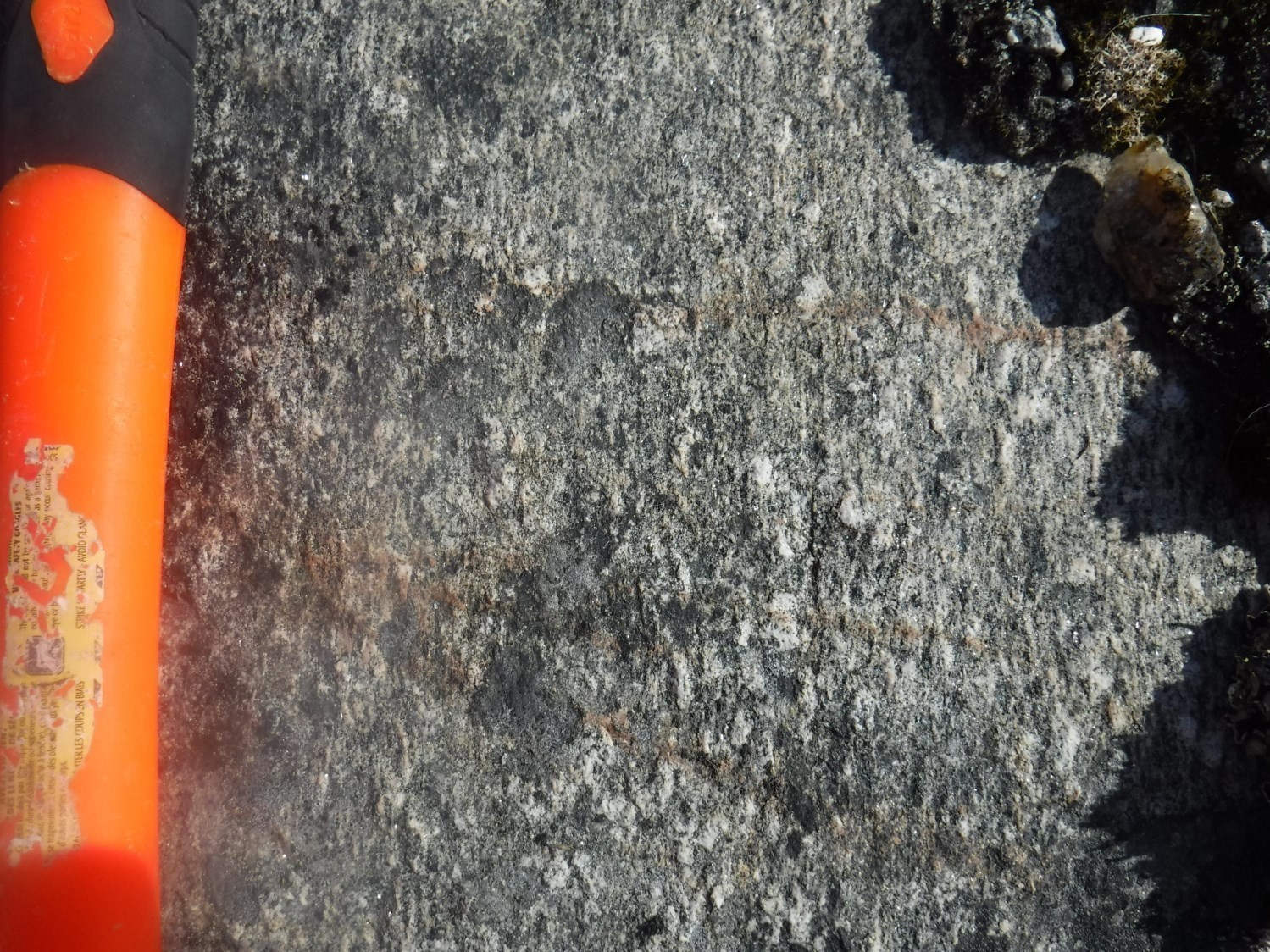 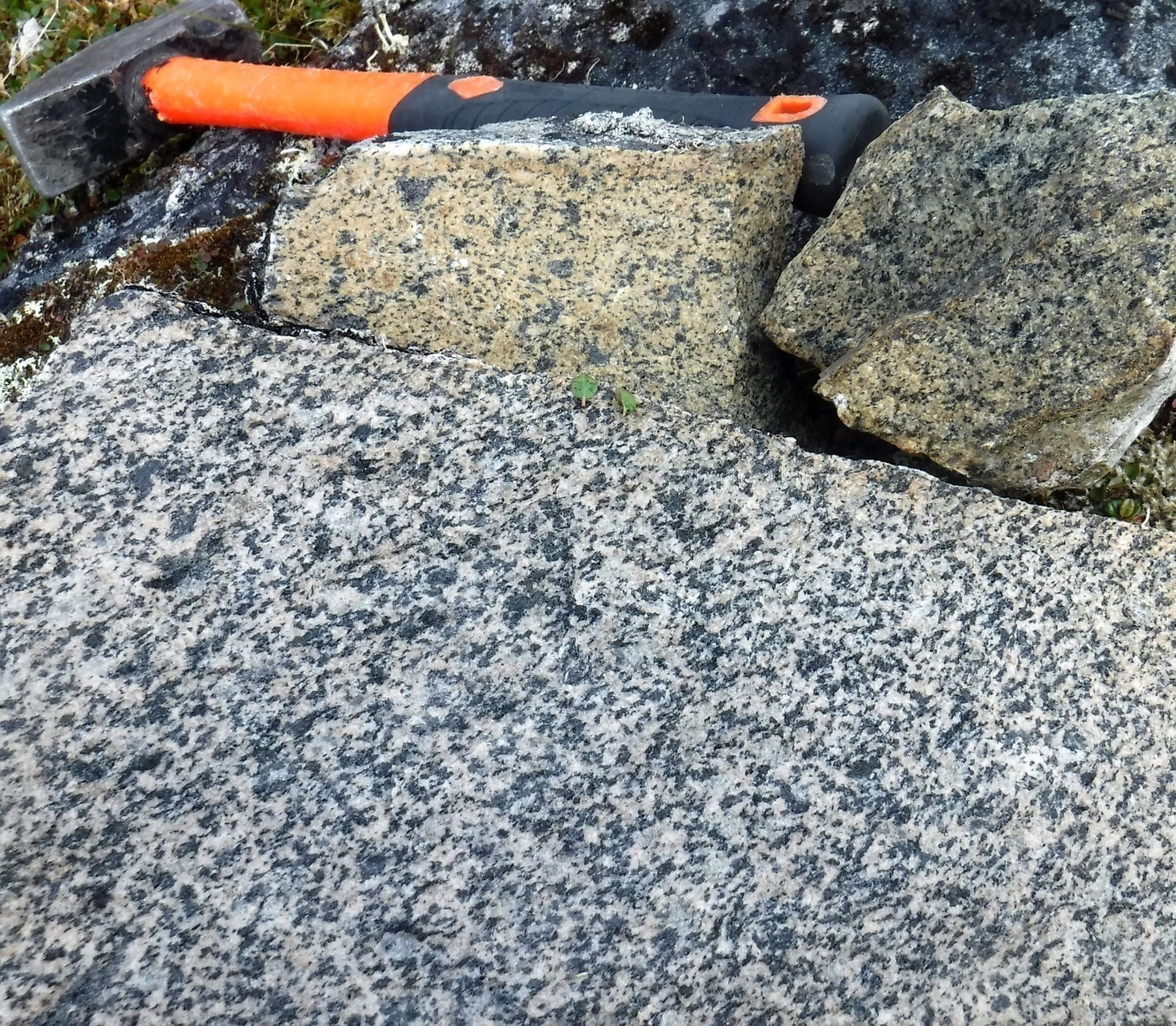 Monzonite and syenite are characterized by the presence of 15-30% pinkish white to beige plagioclase phenocrystals (3-8 mm long). The rock contains 15-30% ferromagnesian minerals and <2% quartz as fine ovoid inclusions in plagioclase. It is generally well foliated and fine grained with a grey matrix. However, in less deformed areas, the rock is pink and black speckled or brown sugar coloured, suggesting the presence of orthopyroxene.

In thin section, monzonite and syenite have a heterogranular, interlobed and partially recrystallized texture. Plagioclase phenocrystals are represented either by large amoeboid crystals with a core surrounded by finer subgrains, or by rounded plagioclase aggregates recrystallized into interlobed grains. Ferromagnesian minerals form clusters consisting mainly of hornblende, as well as locally preserved clinopyroxene cores and non-oriented biotite flakes. The latter is locally skeletal and radial, intergrown with quartz and appears to replace orthopyroxene. Hornblende locally forms poekiloblasts containing plagioclase inclusions. Accessory minerals such as apatite, magnetite and sphene are common (<5%).

The contact with surrounding rocks has not been observed and is presumed to be tectonic in nature.