The Gastrin Suite was introduced in the Gastrin Lake area to group intermediate to ultramafic intrusive rocks of the Kovik Lithotectonic Domain. The suite takes its name from Gastrin Lake located in the SE part of sheet 35K01, where this unit was defined. 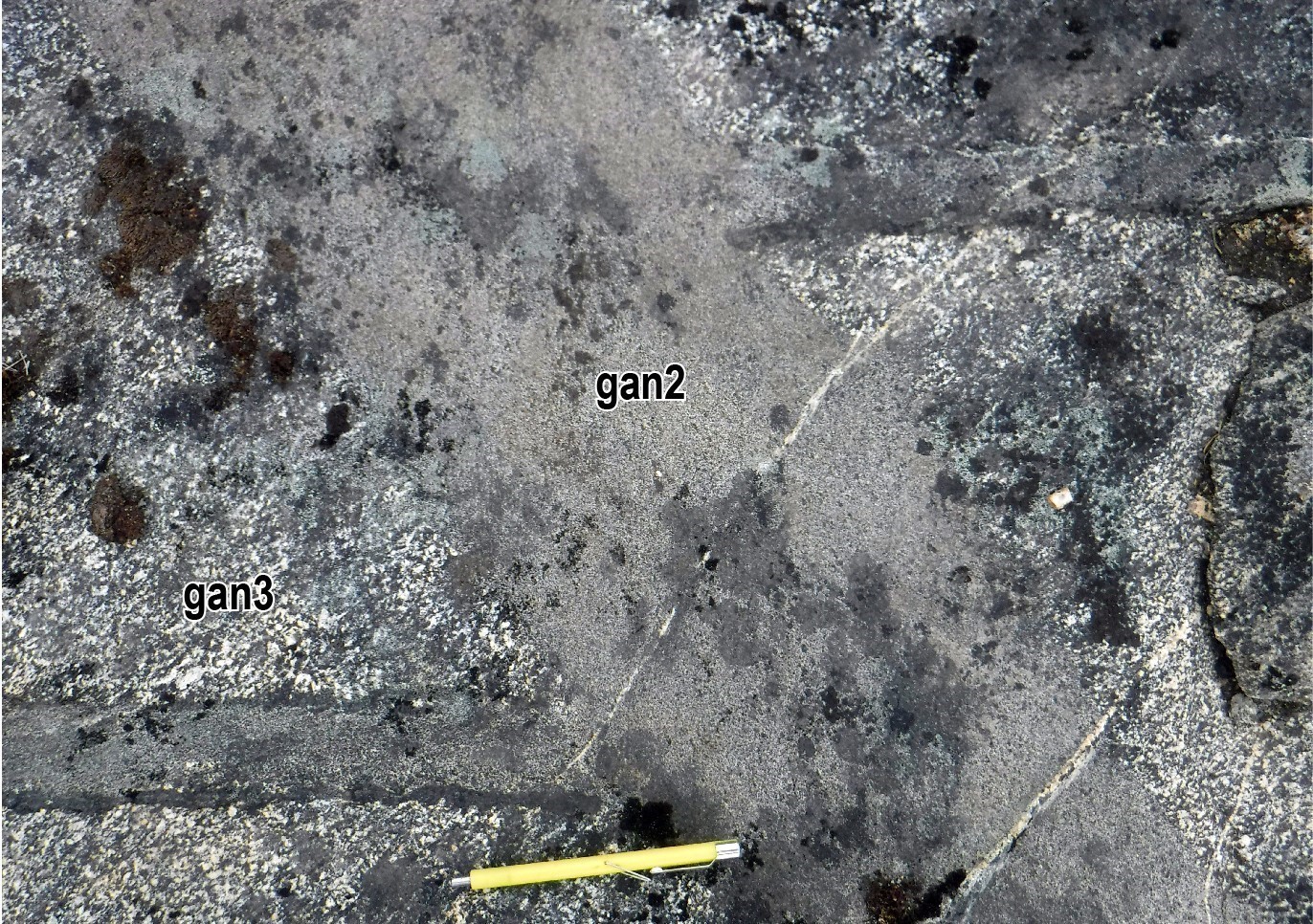 Mafic and ultramafic lithologies were observed in centimetric to metric enclaves within intermediate units. Locally, gabbro also cuts unit ApPgan3. They therefore appear to be contemporaneous intrusive phases which cut each other. Zones of magma mixing have also been observed at the contact between ultramafic rock layers and quartz monzodiorite. In these heterogeneous areas, alternating centimetric layers of these lithologies occur over a few metres wide. Ultramafic rocks are locally strongly assimilated to intermediate units, and represent only lenticular clusters or centimetric discontinuous bands within quartz monzodiorite and monzodiorite. 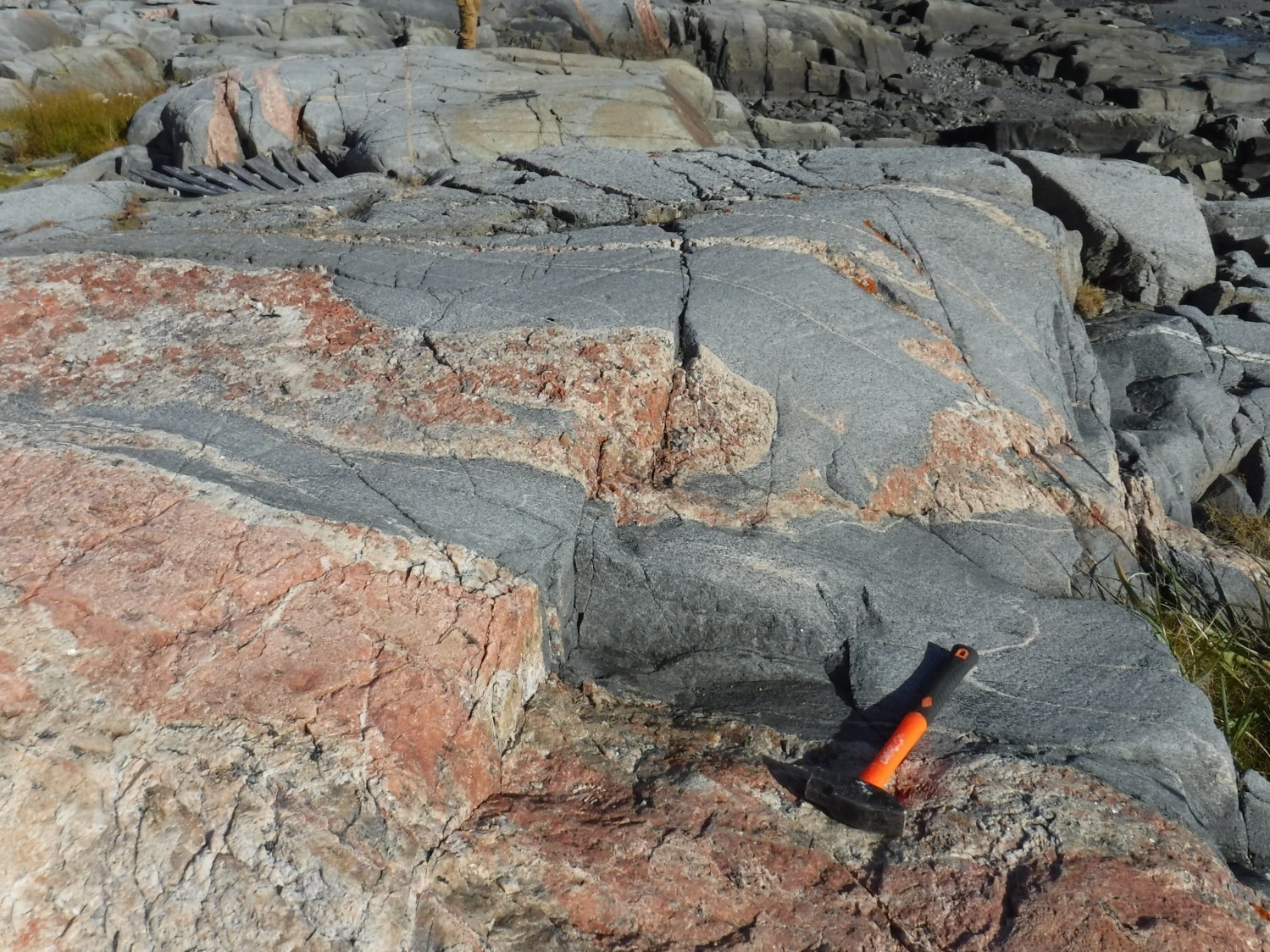 Outcrops assigned to the Gastrin Suite also include 2-40% coarse-grained to pegmatitic granite as centimetric to metric intrusions and dykes. Granite is massive and has assimilated hornblende near the contact with rocks of the Gastrin Suite. It is locally boudinaged and displays straight deformation. Where it intrudes into the mafic or ultramafic host, angular enclaves of the latter are observed within granite. 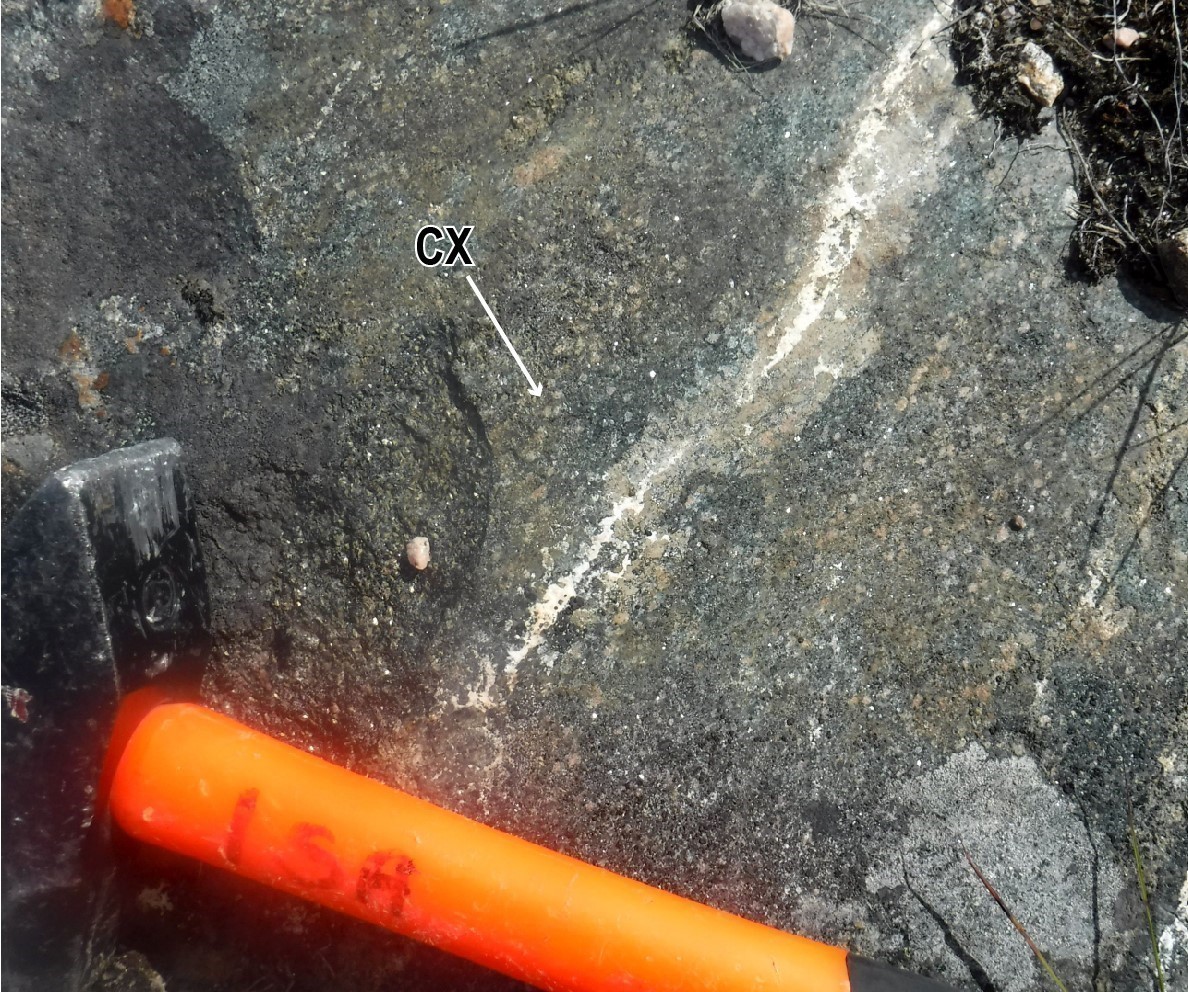 Pyroxenite forms hectometre-wide klippes as well as metric to decametric layers within other units of the Gastrin Suite. The main phase is dominated by dark green hornblende in addition to being highly magnetic and moderately foliated. The rock contains 15-25% rounded phenocrystals of lighter-coloured clinopyroxene. In thin section, the latter is variably uralitized and the matrix is dominated by partially recrystallized hornblende and by even finer clusters comprising an actinolite-chlorite assemblage. Hornblende is also visible as larger crystals containing plagioclase and opaque mineral inclusions. Zones containing numerous small opaque mineral crystals could represent remains of olivine. Some samples also contain up to 5% interstitial carbonate. 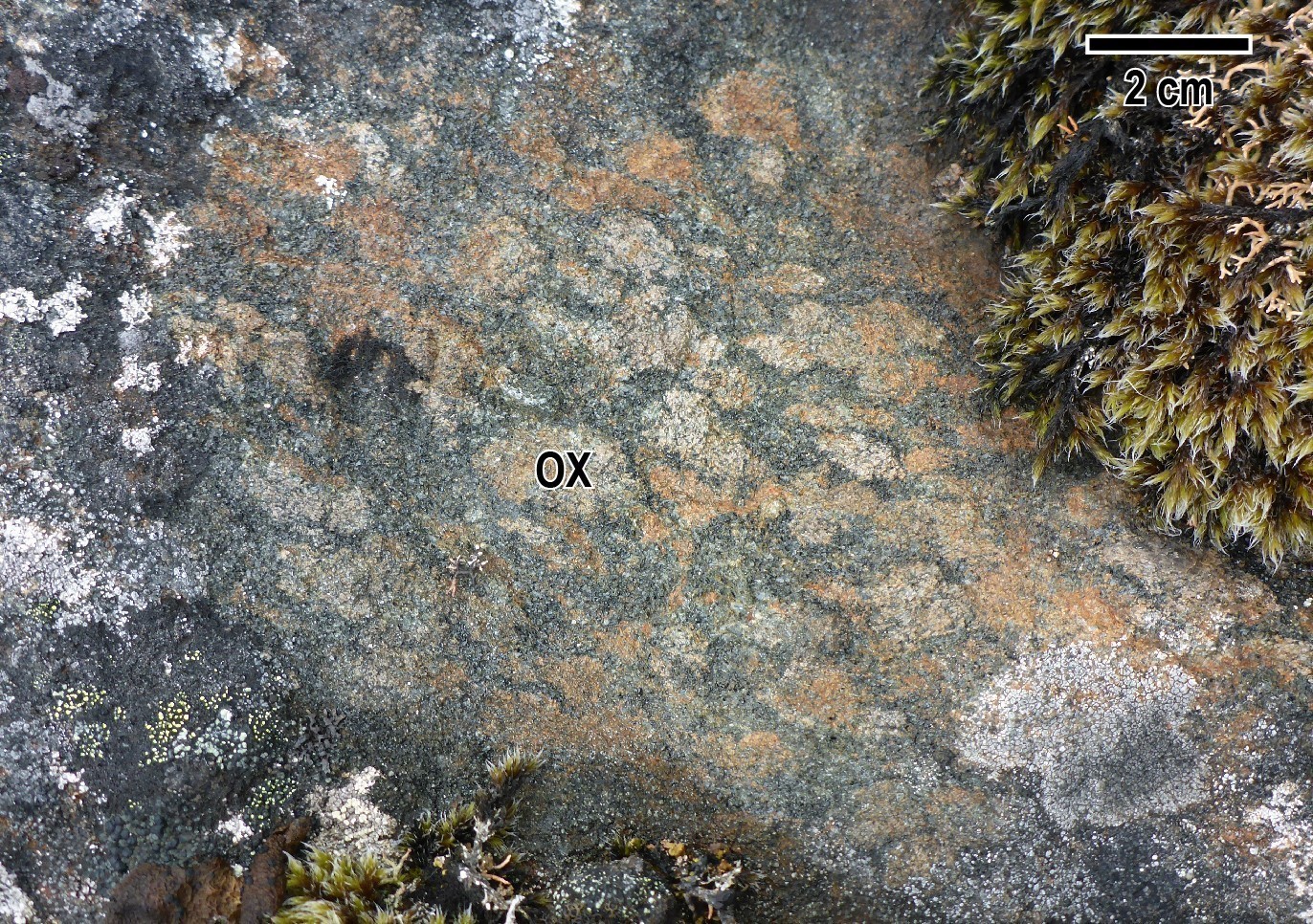 Unit ApPgan1 also includes pyroxenite layers containing ~55% orthopyroxene oikocrystals (1-3 cm in diameter). Orthopyroxene contains hornblende and opaque mineral inclusions. The matrix is similar to that of the other pyroxenite phase, but additionally contains 3% fine olivine crystals, ~1% dark green spinel and some interstitial plagioclase. Olivine is partially replaced by iddingsite. The orthopyroxene phase may also include garnet and carbonate.

Locally, melanocratic gabbro (>80% ferromagnesian minerals) has been assigned to this unit. Gabbro is mainly composed of hornblende with smaller amounts of clinopyroxene and plagioclase. Accessory minerals are garnet, chlorite and opaque minerals. 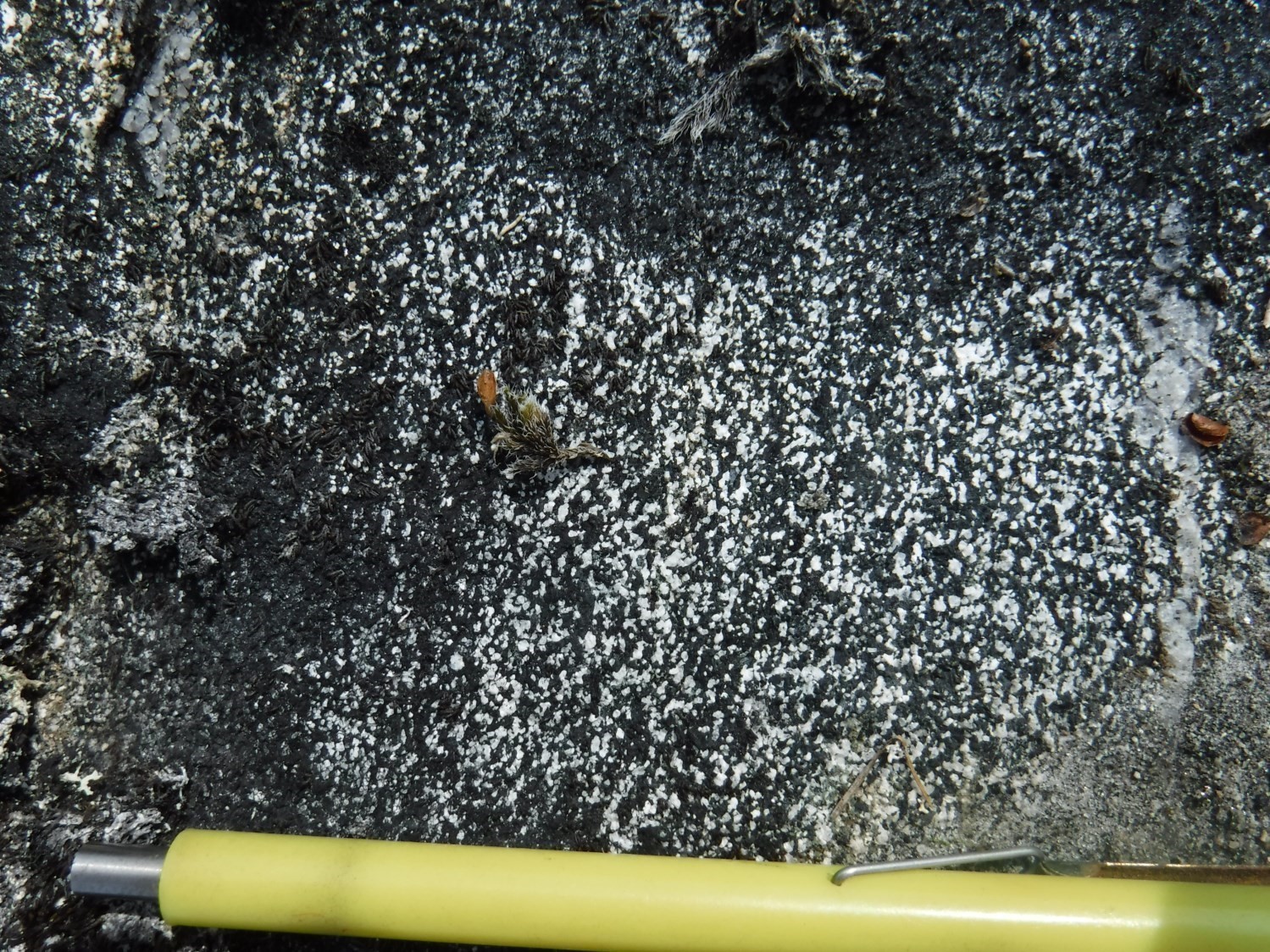 Gabbro is homogeneous, foliated and fine to medium grained. It is locally cut by millimetric to centimetric whitish and diffuse clinopyroxene injections, which could represent leucosome, as well as by coarse-grained to pegmatitic pink granite. Gabbro contains 45-65% ferromagnesian minerals largely dominated by green hornblende. It also contains clinopyroxene (<10%), which is generally replaced by a very fine mineral assemblage dominated by actinolite. Gabbro has an oriented nematoblastic to granoblastic texture. The presence of quartz in anhedral zones has been observed in lighter millimetric bands which also contain microcline (leucosomes and injections). Plagioclase is locally saussuritized. Accessory minerals are numerous and include sphene, epidote, zoisite, chlorite, apatite, magnetite and zircon. Epidote and chlorite are interstitial. In places, chlorite replaces hornblende. 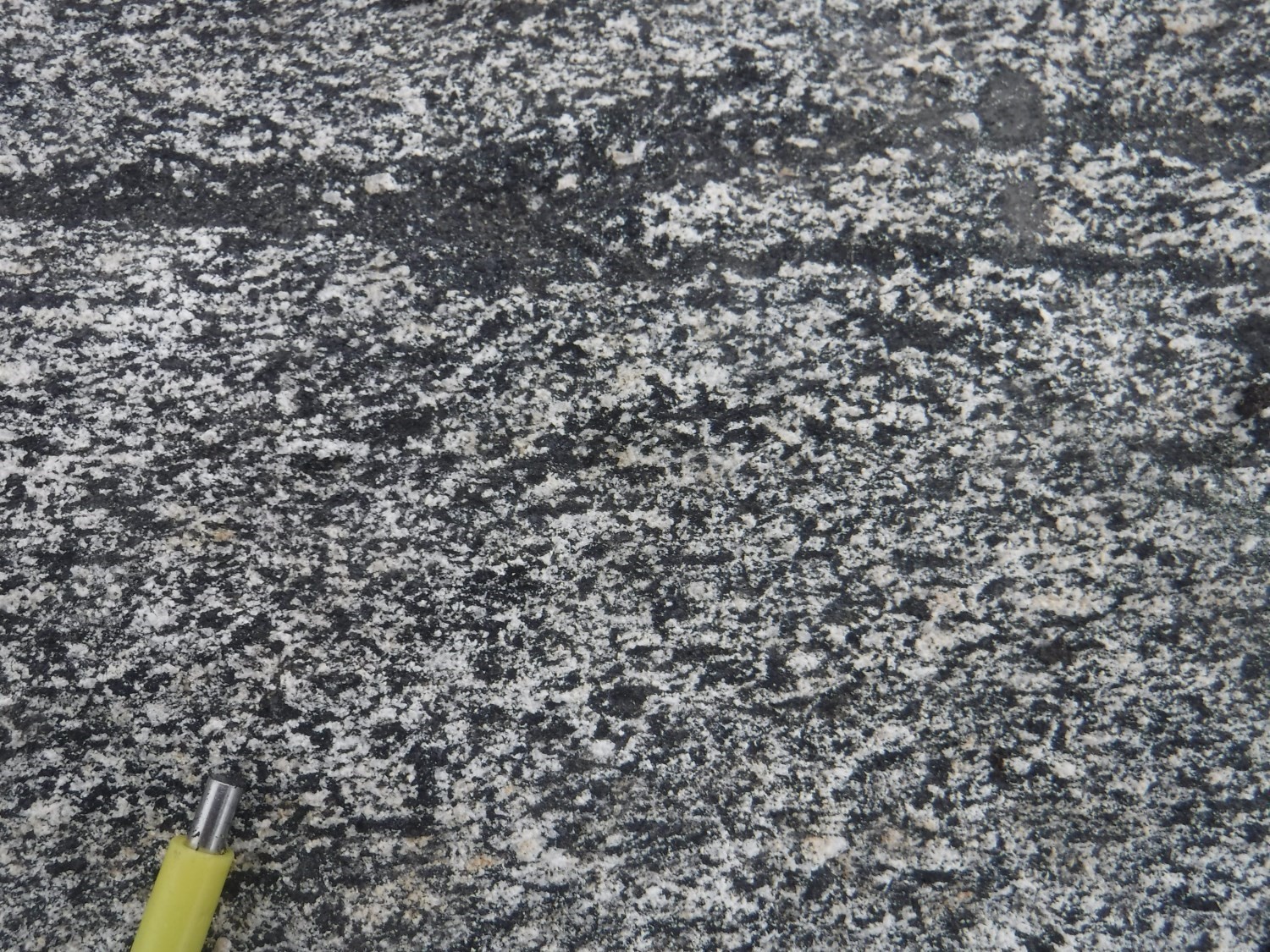 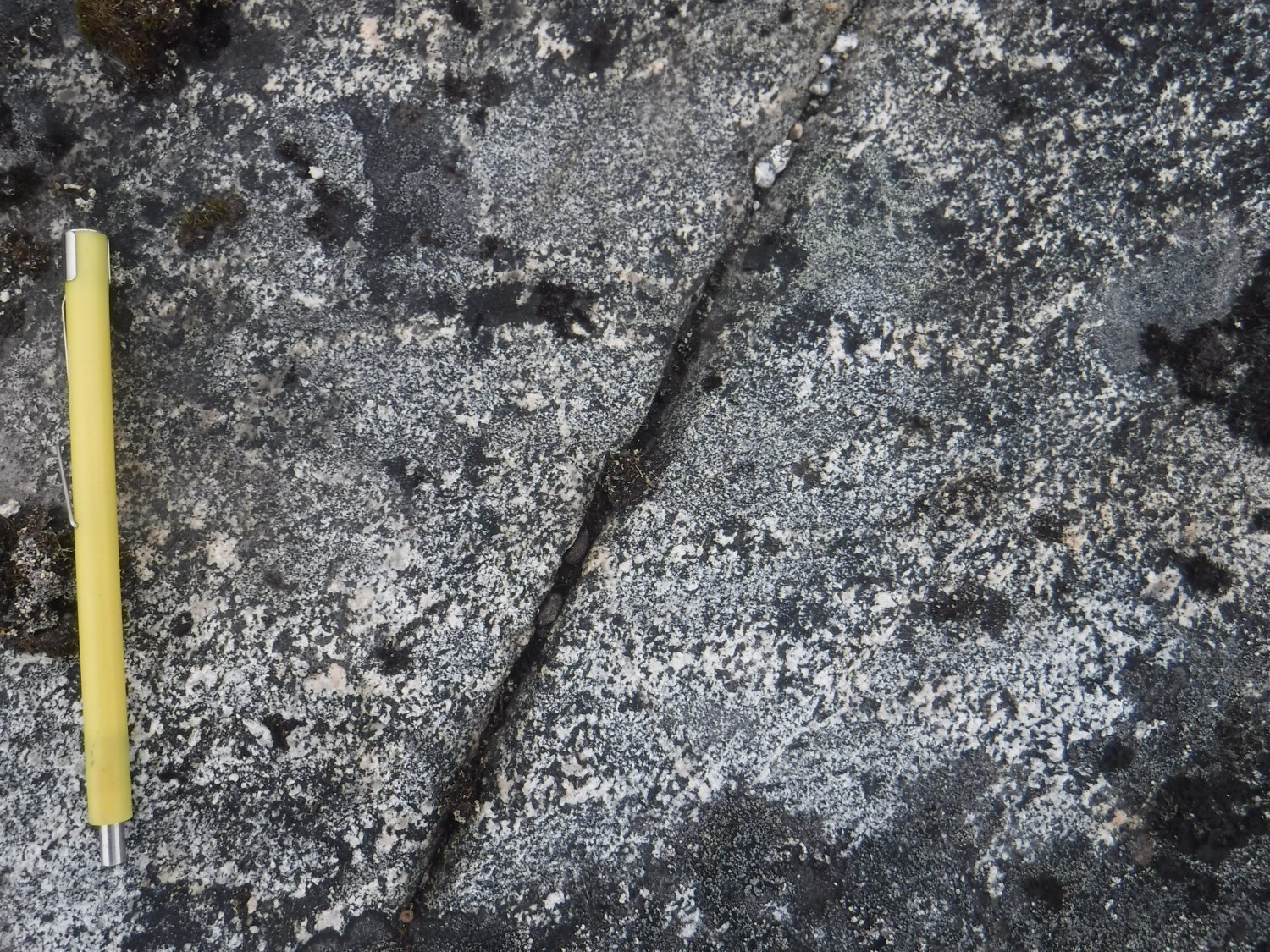 In outcrop, unit ApPgan3 can resemble unit ApPgan2 gabbro but is distinguished by the presence of slightly more quartz (~5%), K-feldspar (20-30%) and biotite. Its composition is predominantly monzodioritic and monzonitic but also includes quartz monzodiorite, quartz monzonite, diorite and quartz diorite. Centimetric to decimetric gabbro layers and bands are frequently inserted in monzodiorite and monzonite. The content of ferromagnesian minerals varies between 20% and 40% on the same outcrop. Phases that contain the least amount of ferromagnesian minerals take on a speckled appearance reminiscent of unit ApPgan4, but finer-grained. Monzodiorite and monzonite locally contain a coarser-grained hornblende ± clinopyroxene phase which forms clusters or diffuse discontinuous bands. This phase could represent leucosome; however, its resemblance to rocks of unit ApPgan4 suggests magma mixing.

In thin section, the rock is fairly well recrystallized and plagioclase is slightly saussuritized. Ferromagnesian minerals consist of biotite and hornblende, the latter being slightly more abundant and forming small, locally elongated phenocrystals. Clinopyroxene can represent the dominant phase in places. It is then variably replaced by hornblende or by late clusters of biotite flakes, at an angle with foliation. Accessory minerals account for 3% of the rock and consist of sphene, allanite, epidote, apatite, opaque minerals and zircon (as inclusions in biotite and hornblende). Epidote appears late and locally replaces hornblende. Carbonate fillings and retrograde chlorite (on biotite) are also observed in some samples. 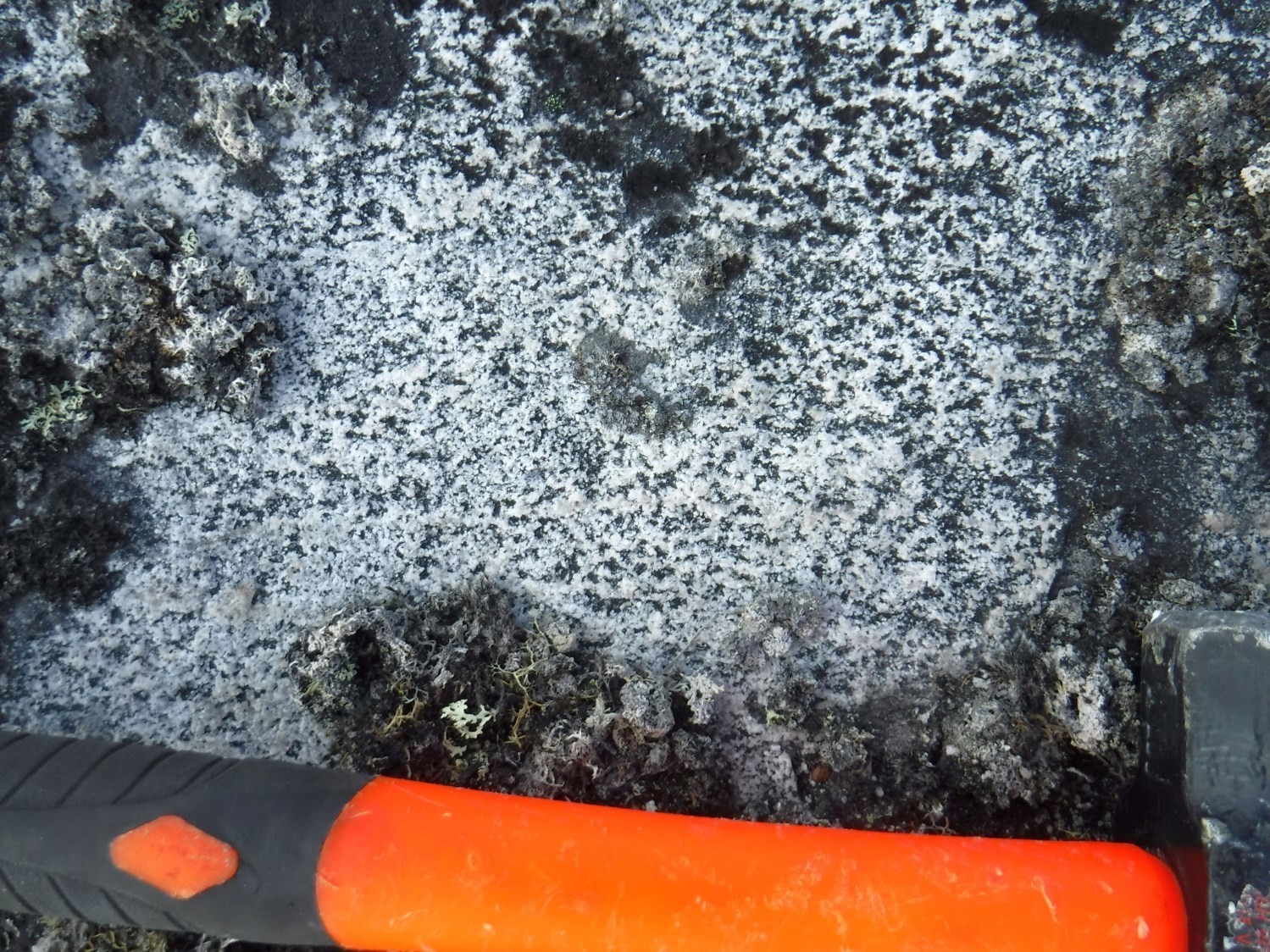 Unit ApPgan4 differs from the other units by a speckled appearance and a slightly coarser grain size. The rock composition is similar to that of unit ApPgan3, but richer in quartz (<10%). It is homogeneous and contains 25-35% ferromagnesian minerals in clusters a few millimetres long which are elongated in foliation. K-feldspar (8-33 %) is commonly observed in lenses, but also locally as fine interstitial crystals, as is quartz (3-10 %).

In thin section, the majority of grains are subhedral to anhedral. Ferromagnesian minerals are dominated by hornblende or clinopyroxene, both being locally observed in similar amounts. Smaller amounts of biotite (5-10%) are also observed. Hornblende seems to replace clinopyroxene. K-feldspar consists of microcline and perthitic orthose. Myrmekites are also observed along the edges of feldspar grains. Quartz forms anhedral zones with undulatory extinction. Like unit ApPgan3, the amount of accessory minerals is high and the mineral phases are the same. Hornblende commonly contains inclusions of the other minerals mentioned.

The Gastrin Suite forms strips up to 4 km wide in the southern part of the Sirmiq Lake area (Vanier and Lafrance, 2020). It is limited to the Kovik Lithotectonic Domain, namely the area south of the Sugluk Shear Zone.

The Gastrin Suite is cut by syenogranite and pegmatitic granite of the Kovik Complex. Relationships with other units of the Kovik Domain were not observed.