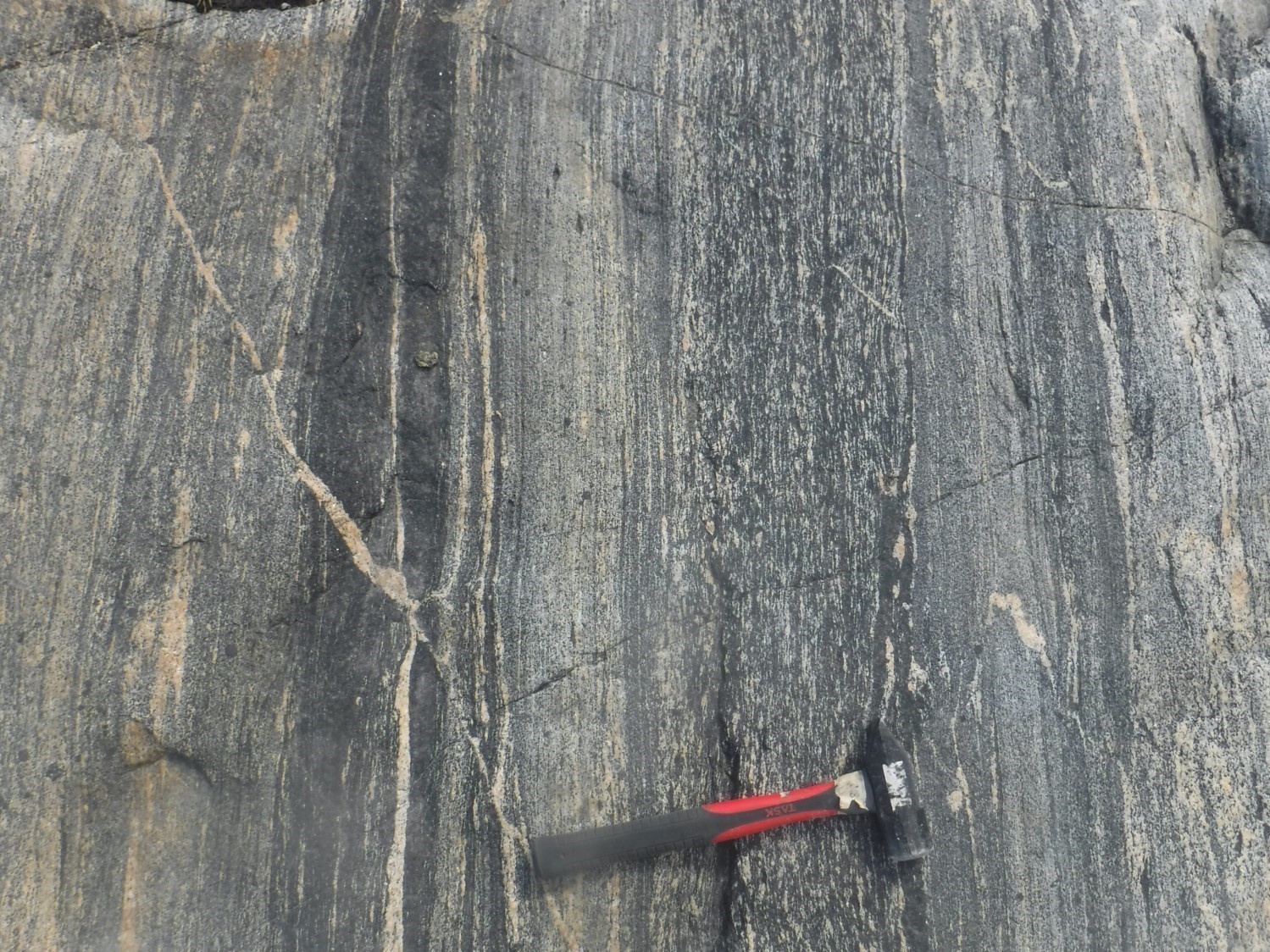 The Suluraaq Suite, based on the namesake cape located in sheet 35E16, was introduced by Charette and Beaudette (2018) to characterize porphyraceous intermediate units in the SW part of the Narsajuaq Lithotectonic Domain (formely Narsajuaq Arc). These rocks had been described by Baragar (2015) as megacrystic K-feldspar gneiss and augen gneiss (Unit A11). The unit was extended to sparse locations in the Sirmiq Lake area (Vanier and Lafrance, 2020). 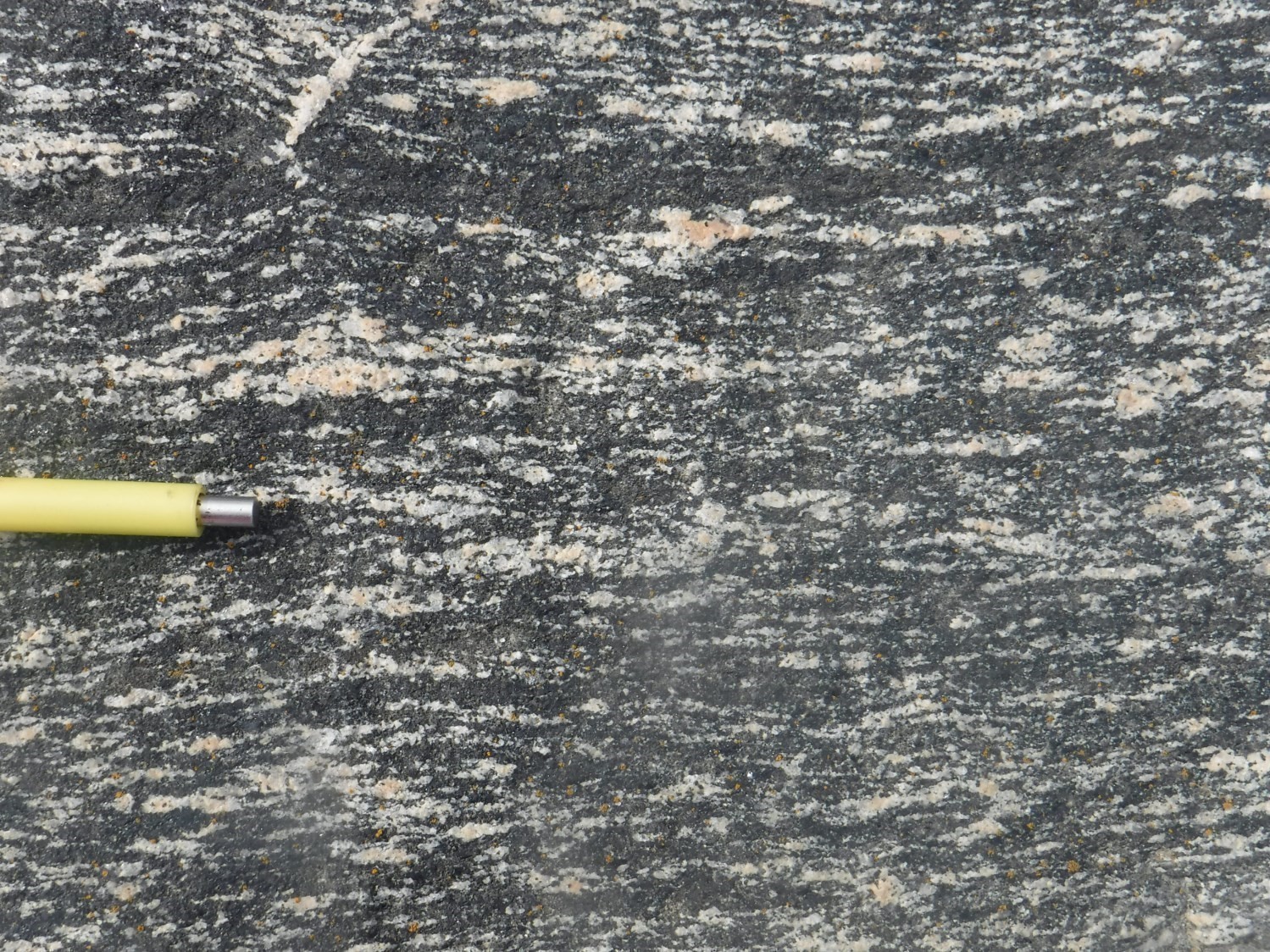 Lithologies of unit pPslq1 display a mineralogical variation from monzodiorite to quartz monzodiorite, as well as a characteristic speckled texture. Banding is produced by compositional variations as well as the heterogeneous distribution of K-feldspar. The latter are concentrated in diffuse, discontinuous, leucocratic and coarser-grained bands. Compositional variations are defined by the content of ferromagnesian minerals that fluctuate between 20% and 30%. Millimetric plagioclase clusters give a speckled appearance to the rock, while centimetric leucocratic bands, interpreted as leucosomes, mark migmatitic banding. These leucosomes make up between 10% and 15% of outcrops. They are granitic, conformable to foliation and in sharp to diffuse contact. Generally, the appearance of this unit is homogeneous, but may have different facies marked by a change in grain size, from fine to medium. Centimetric to decimetric (2-50 cm) layers or boudins of ultramafic composition containing clinopyroxene, hornblende and magnetite are in diffuse or transitional contact and are observed in varying proportions on the outcrop.

In thin sections, ferromagnesian minerals account for 10-25% of the rock and are concentrated in millimetric discontinuous clusters, accentuating the speckled appearance. These clusters contain hornblende, biotite, clinopyroxene and, very locally, orthopyroxene. Pyroxene is observed in the core of ferromagnesian mineral clusters and is partially or completely replaced by hornblende, usually poikilitic. Serpentine locally replaces orthopyroxene. Accessory minerals are zircon, monazite, apatite and sphene. 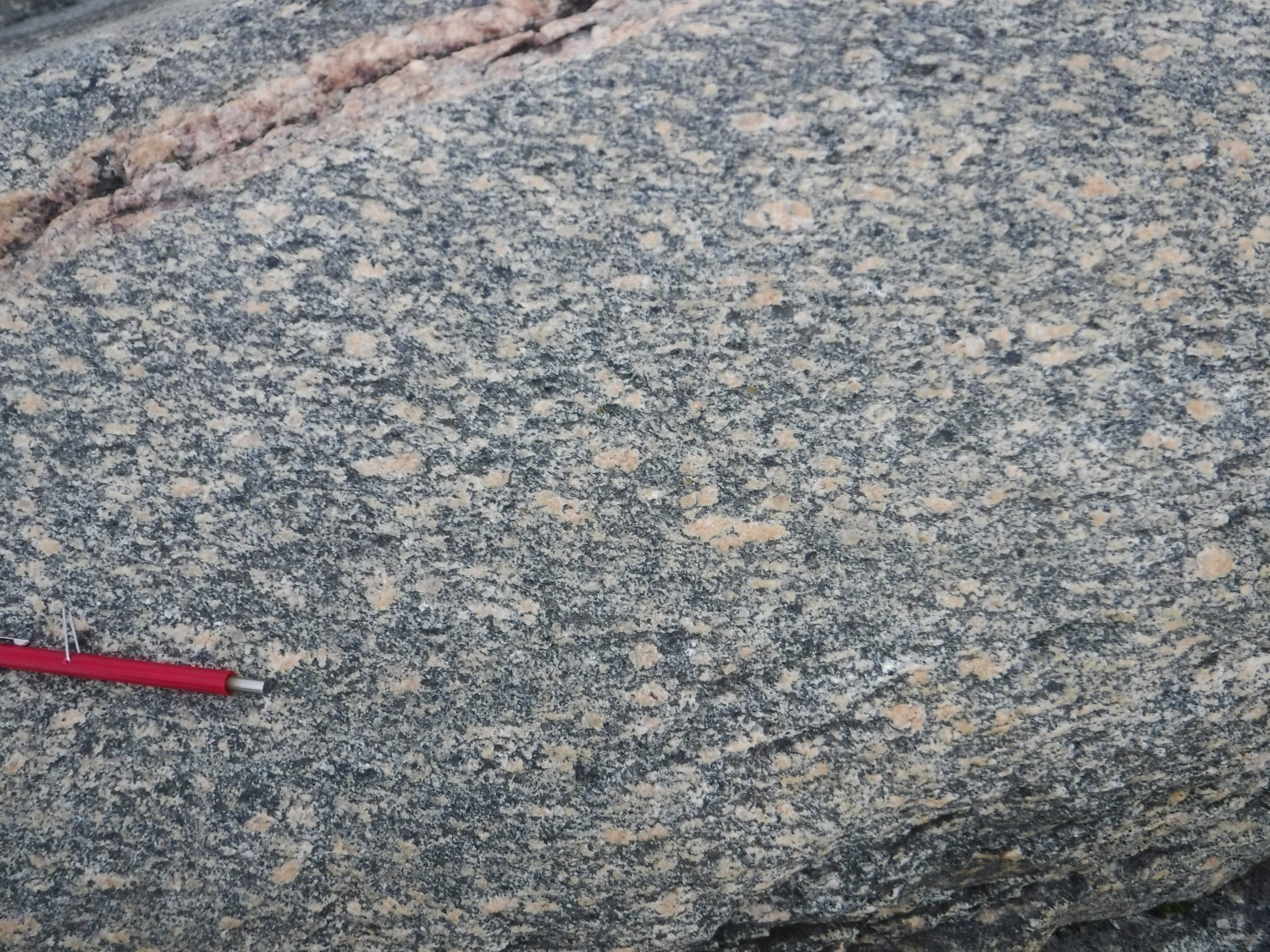 Subunit pPslq1a is characterized by a porphyraceous texture. It is dark grey and contains whitish to pinkish K-feldspar phenocrystals (0.5-2 cm). The latter occur in two distinct ways within the quartz monzonite and quartz monzodiorite. On the one hand, they can be associated with discontinuous pinkish bands. These centimetric bands have homogeneous distribution at the outcrop scale and are conformable to foliation. In these cases, K-feldspar usually forms porphyroclasts stretched in foliation. On the other hand, K-feldspar phenocrystals can be distributed very irregularly or in metric layers, giving the rock a heterogeneous appearance. In these zones, the concentration of phenocrystals reaches 15-20%. Locally, K-feldspar has a mortar texture around it.

In thin section, biotite and hornblende are the main ferromagnesian minerals (20-25%). Sphene or clinopyroxene are observed in some samples (<15%). Hornblende comes in two forms: small crystals in ferromagnesian mineral clusters or large subhedral crystals. Sphene is mainly associated with large hornblende crystals or opaque mineral crystals and locally occurs as medium-grained euhedral crystals. Clinopyroxene is partially replaced by hornblende. The presence of apatite in significant amounts (5-7%), locally as medium-grained crystals, is characteristic of this subunit, while zircon, epidote and carbonates are trace minerals.

North of the Naujaat Shear Zone, the pPslq1a subunit systematically contains porphyroclastic horizons highlighting the most intense deformation in this area. It also contains discontinuous and millimetric leucosomes with clinopyroxene and hornblende phenocrystals. 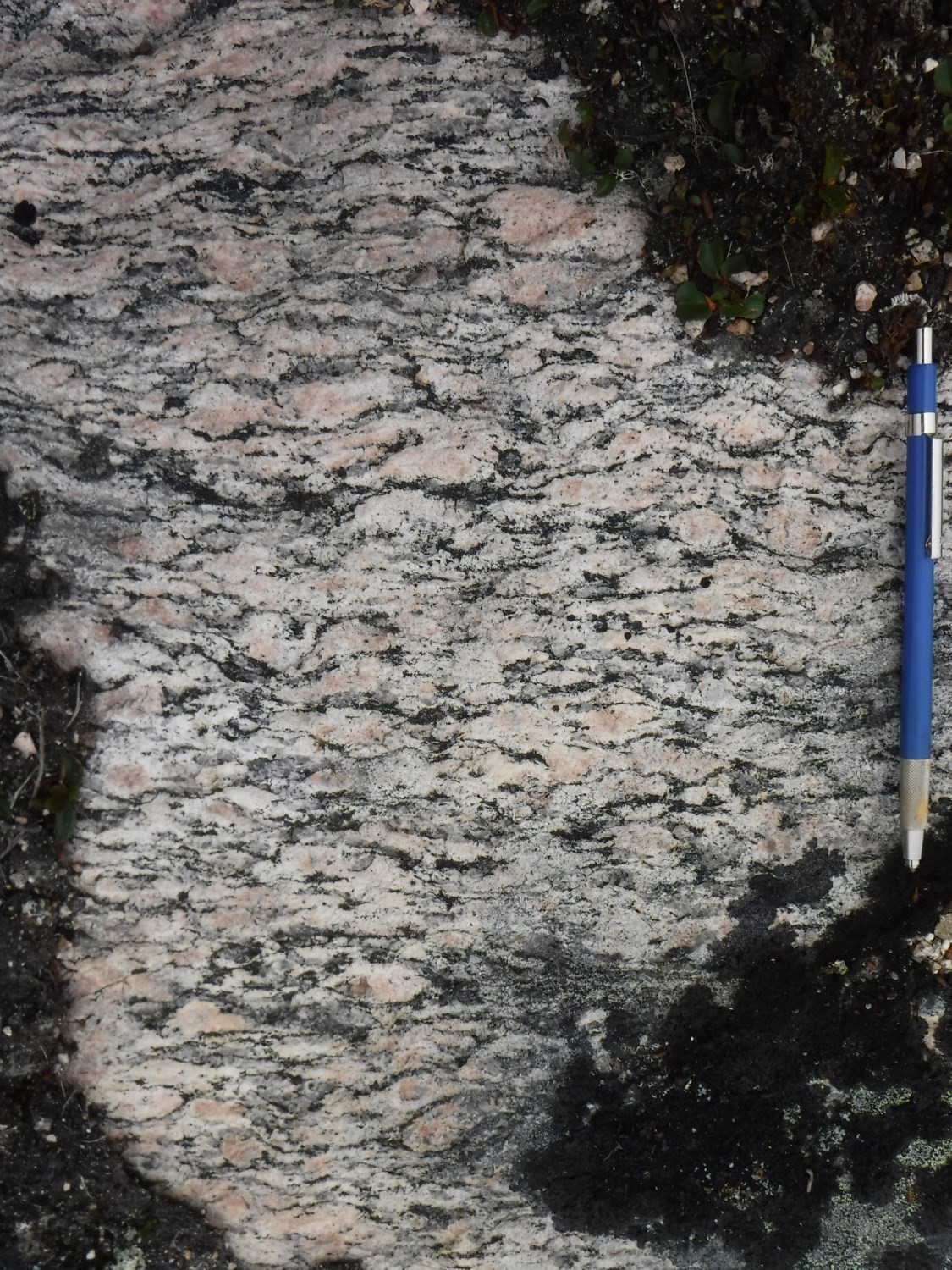 Unlike subunit pPslq1a, quartz monzonite of the Suluraaq Suite (pPslq2) is mylonitized and banding is marked by porphyroclastic bands separated by thin layers of ferromagnesian minerals. The latter are associated with discontinuous felsic bands marking banding. Lithology can in places be almost exclusively made up of bands, but when they are smaller in proportion, they typically account for 15-25% of the lithology. Millimetric to centimetric (0.5-2 cm) polycrystalline porphyroclasts are formed of recrystallized plagioclase and K-feldspar. Quartz forms thin millimetric bands. Ferromagnesian minerals occur as millimetric blades forming an anastomosed network between porphyroclastic bands. Biotite is the most abundant ferromagnesian mineral, and forms elongated clusters in foliation. Apatite is also present in these clusters (5-10%). This unit is rich in K-feldspar and geochemical analyses reveal a higher K2O content than in unit pPslq1 (~5 wt.%).

The speckled monzodiorite unit (pPslq1) is locally in transitional contact with K-feldspar porphyroclastic quartz monzonite (pPslq2). These two units appear to be comagmatic and unit pPslq2 could be a highly deformed equivalent of unit pPslq1﻿ porphyraceous rocks. These intermediate intrusive rocks of the Suluraaq Suite are cut by a late massive monzodiorite, hololeucocratic and whitish in altered surface.

Different lithologies occur as klippes or folded horizons in sharp contact in unit pPslq2 masses, such as the gabbronorite and mesocratic hypersthene diorite of the Pingasualuit Complex. Unit pPslq1a is in sharp contact and alternating with the Sainte-Hélène Complex.