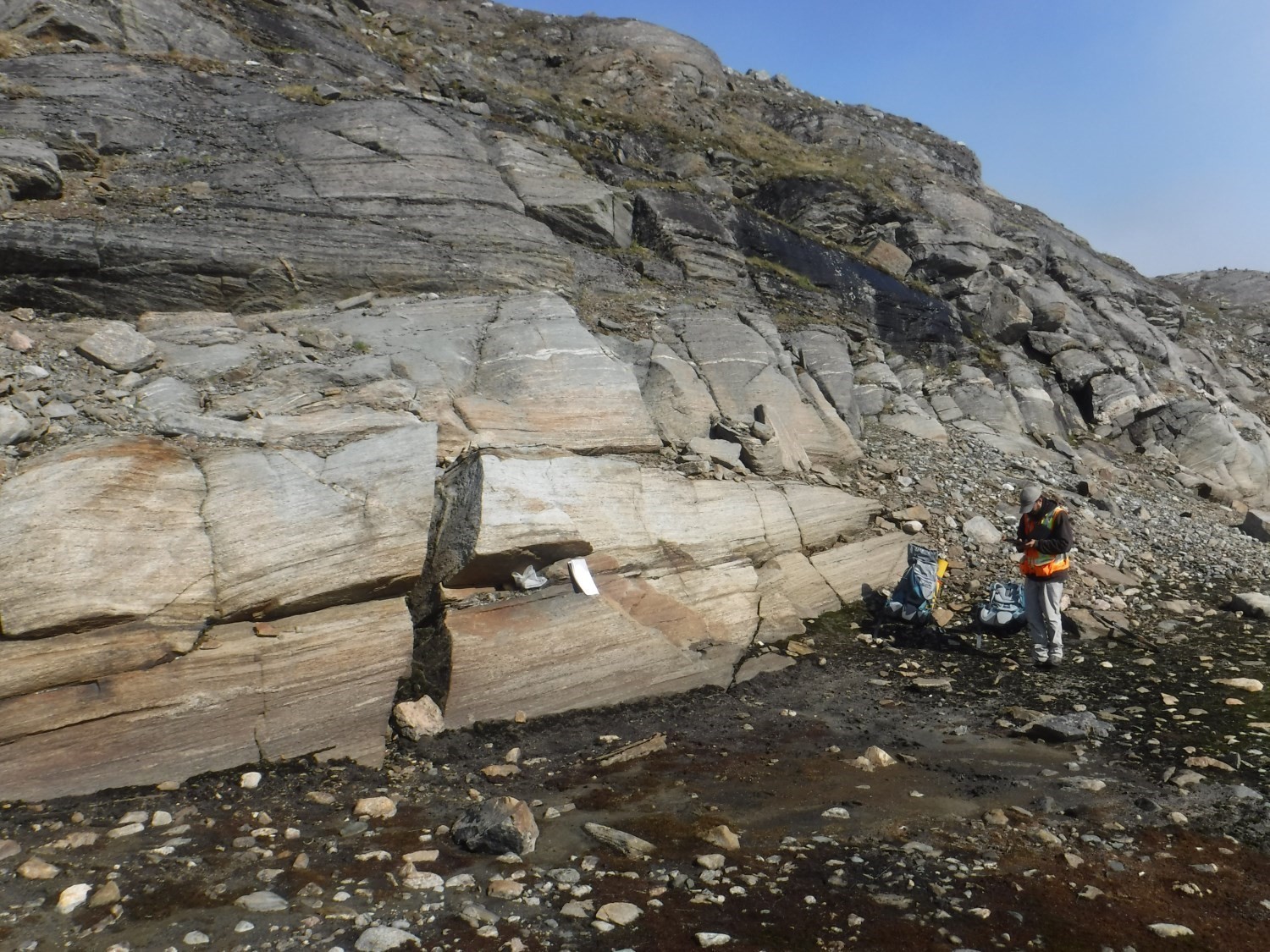 This record is based on aeromagnetic maps’ interpretation and information collected from geological survey carried out in the summer of 2019 in the Sirmiq Lake area (Vanier and Lafrance, 2020).

The Estre Structural Domain (DSest) occupies the NW bank of the Salluit fjord. It is bordered to the west by the Kuuruq (DSkuuu) and Siukkaq (DSsiu) structural domains and extends northward to the Hudson Strait. The shape of the DSest remains to be determined for the southern section since it has not been the subject of field work.

The Estre Complex is the main stratigraphic unit of the domain, covering almost three-quarters of the area. Other stratigraphic units present are the Sainte-Hélène, Erik Cove and Pingasualuit complexes. Decimetric to metric granitic injections, not mapped at the scale of the present work, have also been routinely recorded. These granitic rocks are attributed to the Paleoproterozoic Sanningajualuk Suite. 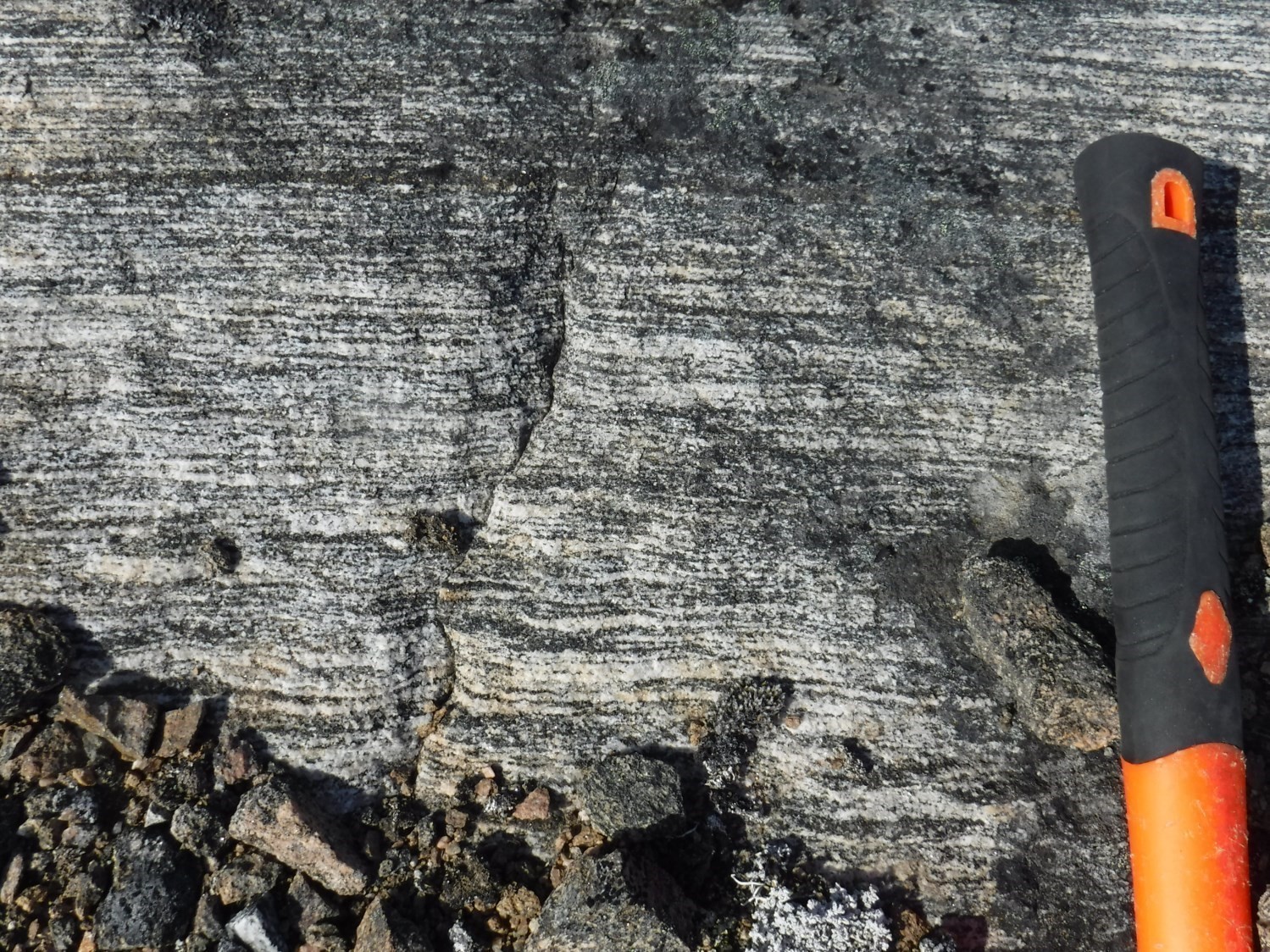 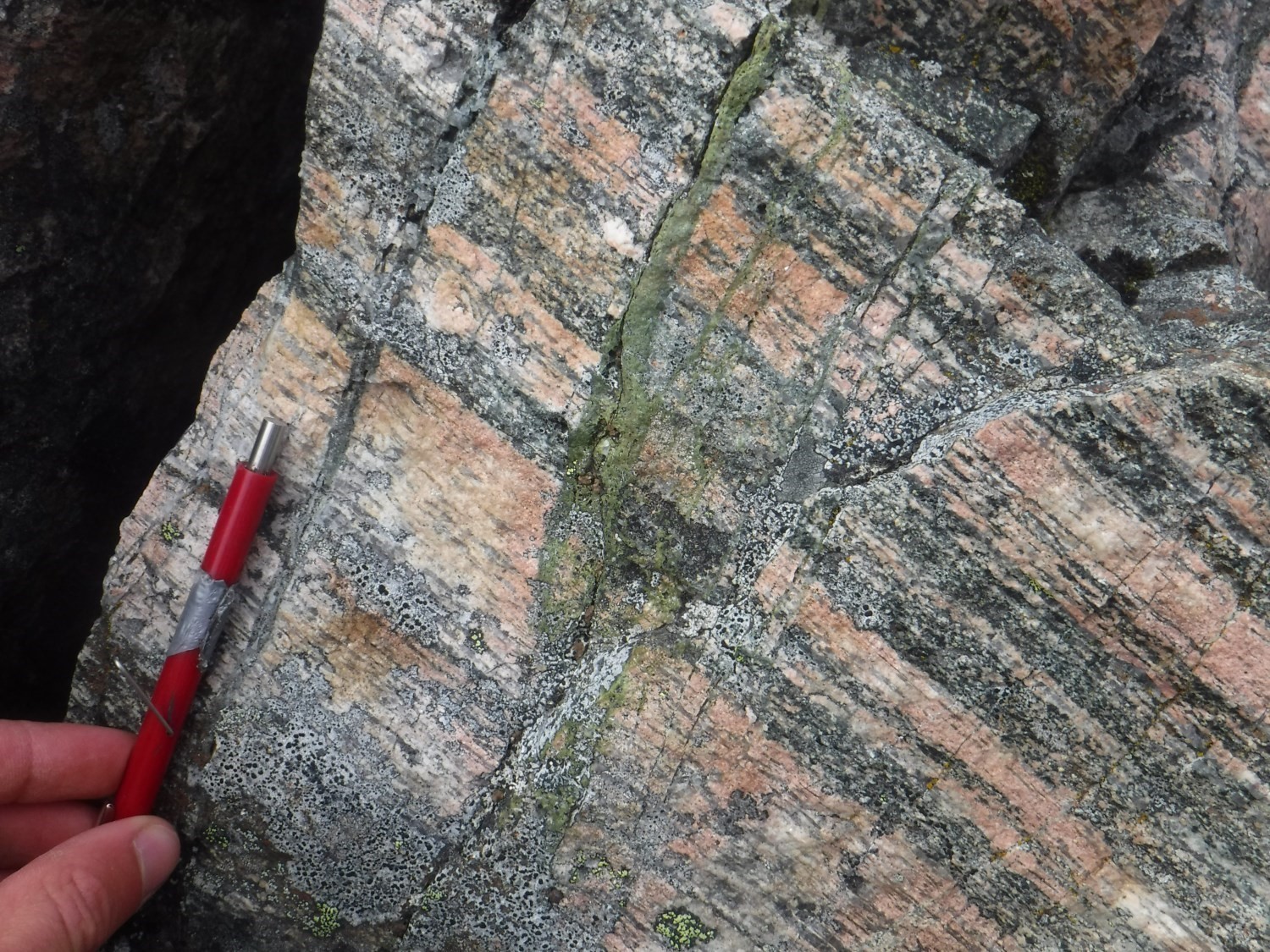 Rocks of the DSest are affected by a penetrative tectometamorphic foliation, which is accompanied in several places by a certain degree of mineralogical segregation and more or less apparent gneissosity. Lithologies containing >15% quartz regularly contain quartz lenses or bands. Compositional banding characteristic of the Estre and Erik Cove complexes is accentuated by the fact that it is completely parallelized in the planar fabric. Stereographic projections for the DSest were produced by dividing the domain into two subdomains since the structural grain is curved. Thus, the general attitude of the foliation is 312°/17° in the western part and 254°/36° in the eastern part. 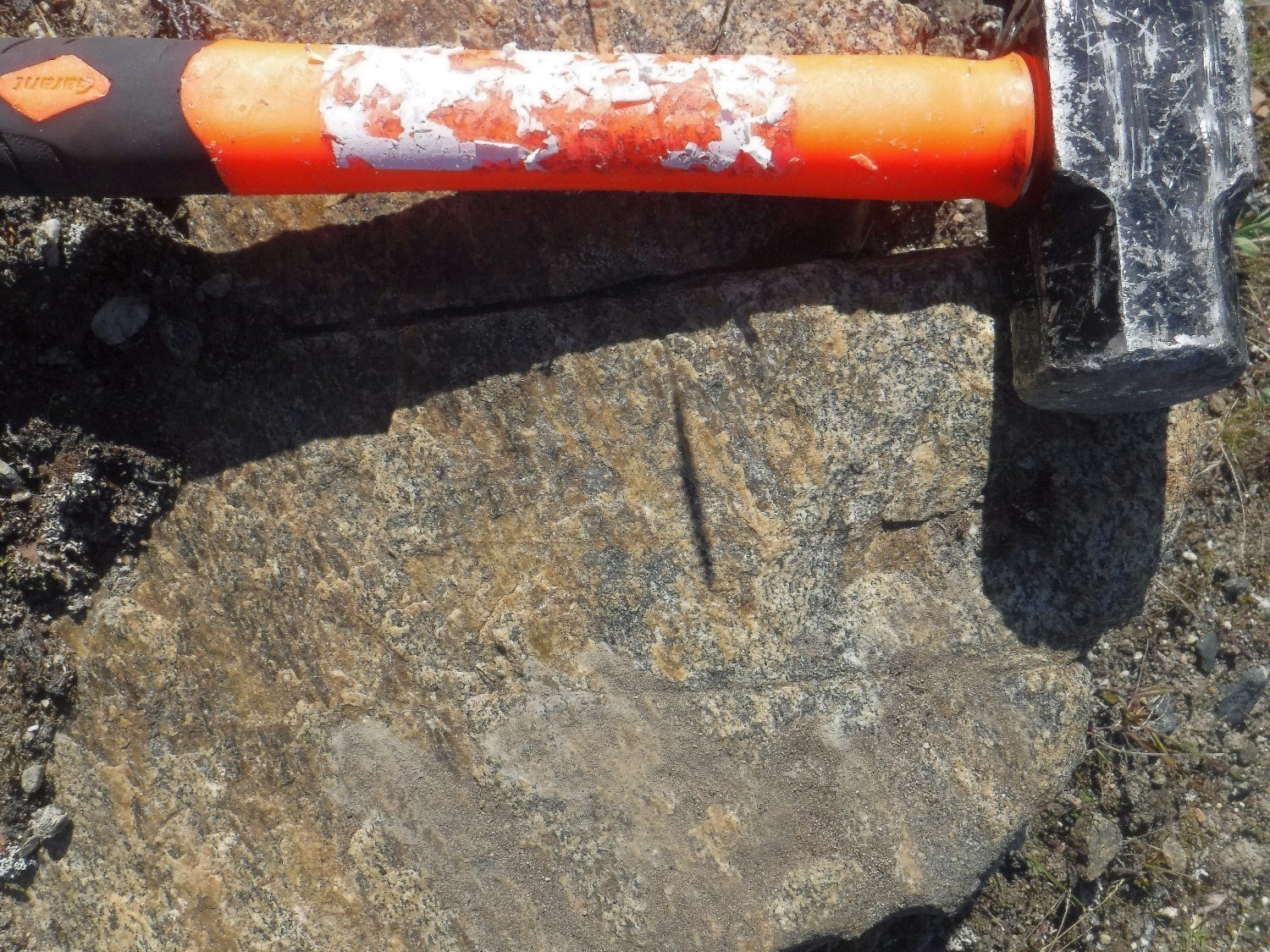 Quartz and feldspar srtretch lineations are commonly measurable, as is the mineral lineation defined by the alignment of ferromagnesian minerals. All these measurements determine an average orientation of 112°/10° in the western part and 65°/10° in the eastern part. Subhorizontal inclination of lineations in the DSest contrasts with the dip near the slope line for lineations of the Sources Structural Domain (DSsou). However, a few lineations in the slope line have also been measured; these occur mainly in shear zones.

Metre to decamtre-thick shear zones were also observed in the DSest. These are evidenced by the presence of mylonite and porphyroclastic rocks. The general attitude of the planar fabric is the same as in surrounding rocks, while lineations may be oriented near the slope line or subhorizontal, depending on the shear zone. 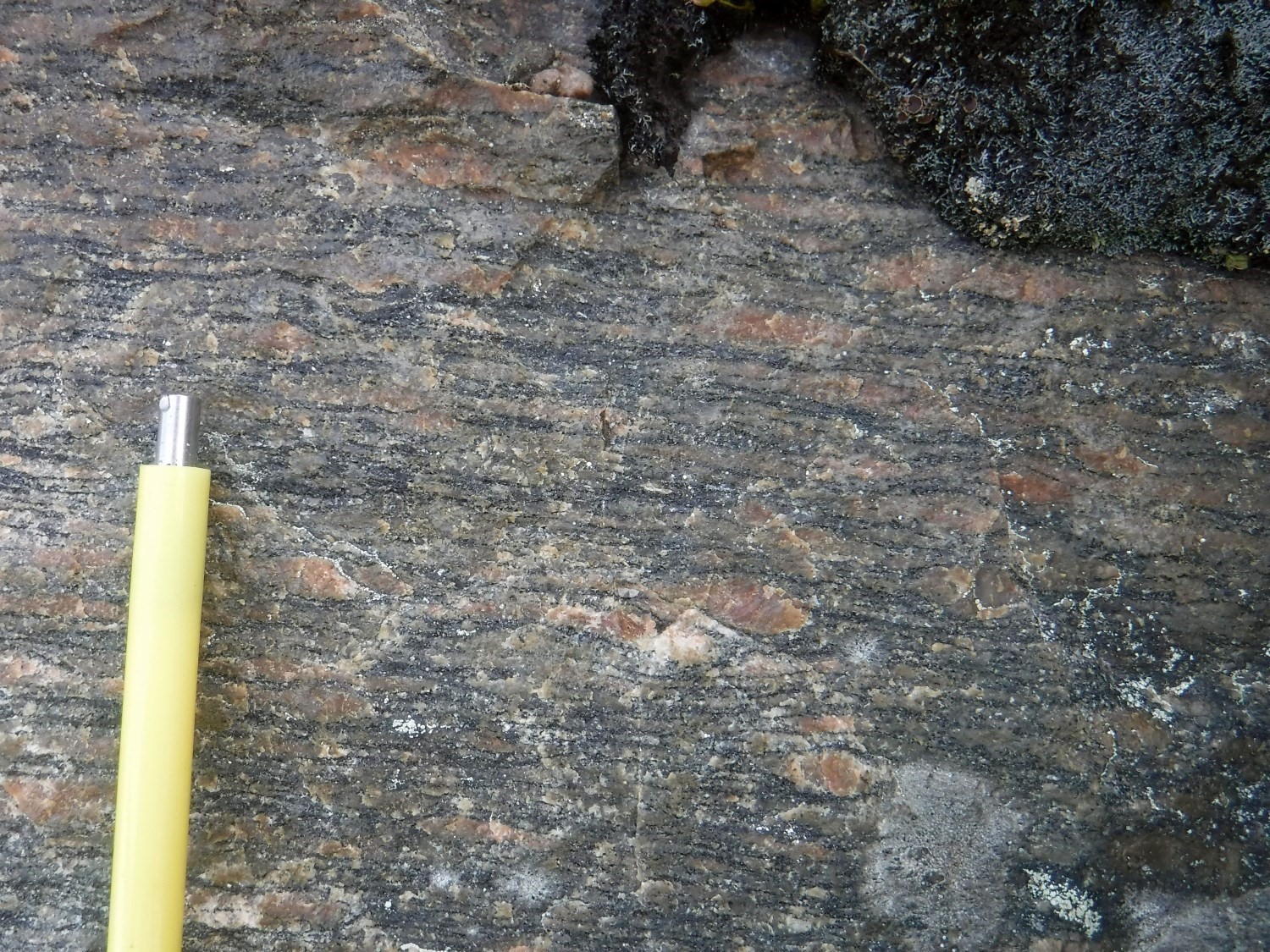 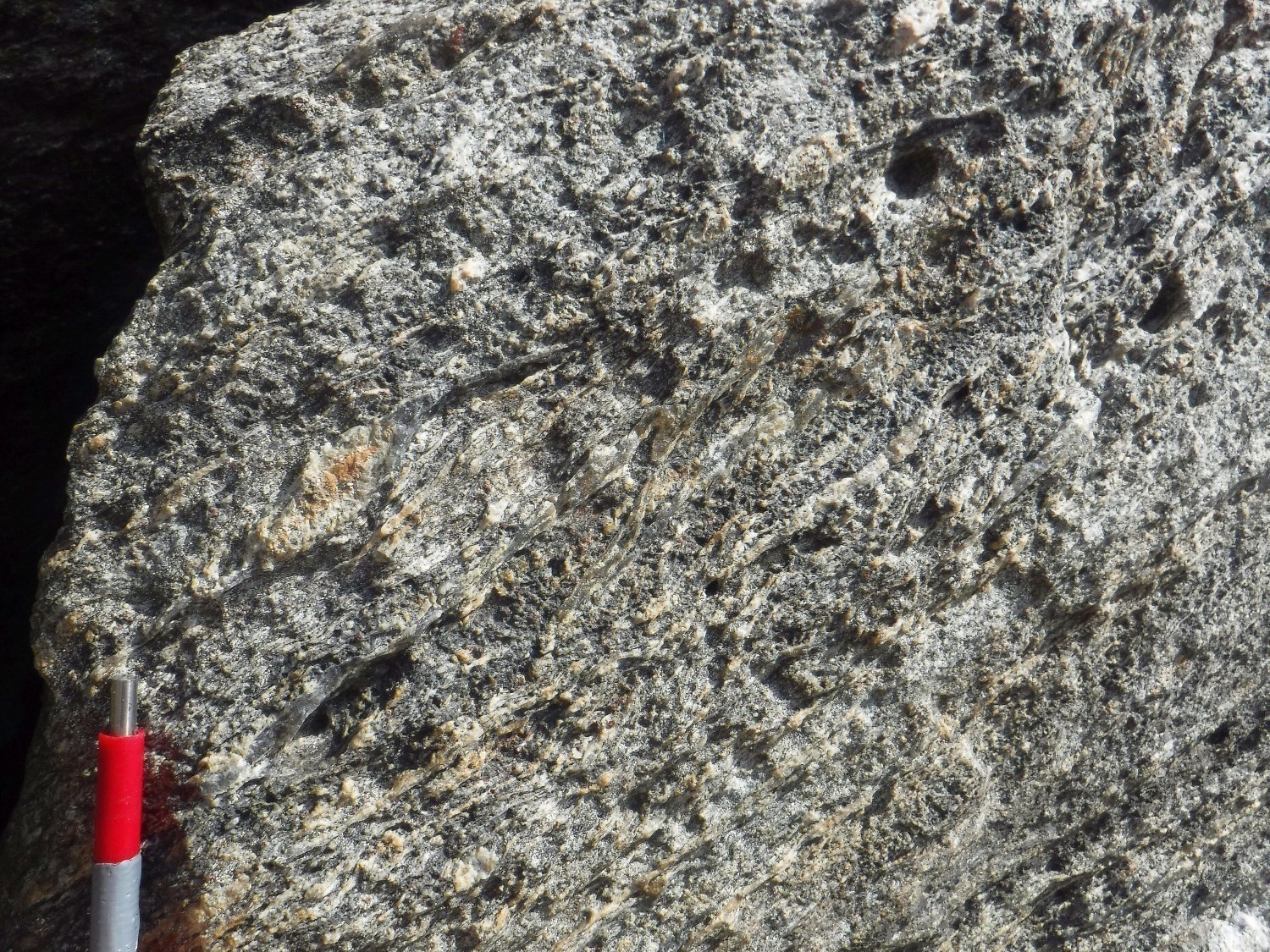 As mentioned earlier, some zones of more intense deformation are present in the DSest. Of these, two show clear kinematics. First, C’-type structures and sigma-type porphyroclasts, present in porphyroclastic mylonite, indicate sinistral movement along a plane oriented 324°/21° and a lineation oriented 114°/11°. This shear zone is located near the southern limit of the DSest. The second is located in the centre of the DSest, at the interface between migmatized metasedimentary rocks of the Erik Cove Complex and granulitic gneiss of the Estre Complex. In this area, the lineation is near the slope line of a mylonite foliation whose attitude is 241°/36°.

Deformation in the DSest is characterized by the presence of penetrative fabrics that extend from one outcrop to the next. The common presence of quartz lenses and bands supports intense deformation. In addition, local intense deformation zones are marked by mylonite. Due to the curve of planar fabrics, the general geometry corresponds approximately to a synform. However, the DSest does not appear to correspond to a synform. Firstly, folding is very uncommon on the scale of the outcrop. Secondly, lineations associated with a regional fold should be oriented close to the axis of the fold shallowly dipping towards the NW. Lineations in the western part of the DSest do not correspond to this criterion. In a case where lineations were pre-existing, they would themselves be affected by folding and would be positioned along a great circle for the whole DSest, which is not the case. For these reasons, the parallel style seems more appropriate for the DSest. Indeed, structural characteristics describe penetrative and parallel fabrics. They are, however, curved in an area, as is the case in the DSsou. The origin of these particular geometries remains uncertain.

Based on macroscopic and thin-section observations, the main deformation in the DSest occurred under granulite facies metamorphic conditions. First, the presence of migmatitic banding parallel to foliation or gneissosity indicates that partial melting was synchronous to the penetrative planar fabric (Sawyer, 2008). Since orthopyroxene is present in the mobilisate of the Estre Complex, the granulite facies has been reached during migmatization.

At the textural scale, quartz present in rocks of the Estre Complex is characterized by heteroganular aggregates of amoeboid to interlobed grains. These aggregates form lenses or discontinuous bands, with some coarse grains having chessboard extinctions. Quartz also regularly has edges pinched by biotite flakes. All these textures are typical of quartz recrystallization by grain edge migration (Guillope and Poirier, 1979; Urai et al., 1986; Jessel, 1987). This mechanism usually occurs at temperatures >500°C (Kruhl, 1998; Stipp et al., 2002). Chessboard extinctions are known to occur at > 600°C (Lister and Dornsiepen, 1982; Mainprice et al., 1986). Garnet and orthopyroxene, the minerals associated with the metamorphic peak, show syn-kinematic textures.

The aeromagnetic signature of the DSest is characterized by regularly and closely alternating positive ridges and moderate troughs. This pattern gives the DSest a banded appearance. Geological contacts and structures are parallel to banding defined by aeromagnetic ridges.

The only known geochronological markers in the DSest are granitic intrusions associated with the Sanningajualuk Suite. A sample of granitic dyke possibly belonging to this suite, and cutting foliation, was collected by Parrish (1989). Its crystallization age at ~1753 Ma corresponds to the minimum age of its deformation. However, there is no constraint as to the maximum age of deformation.