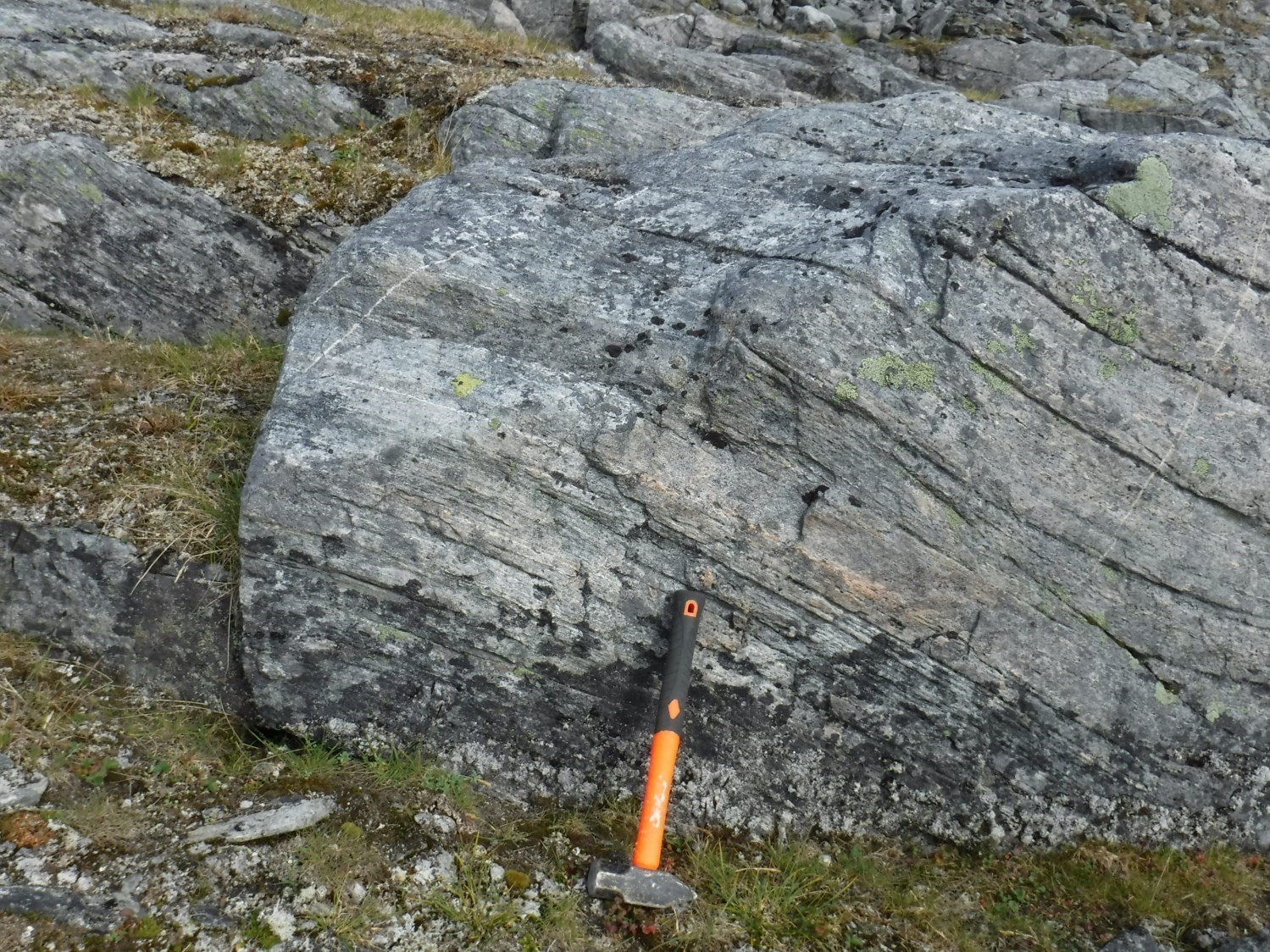 This record is based on aeromagnetic maps’ interpretation (Intissar et al., 2014) and information collected from geological survey conducted in the summer of 2019 in the Sirmiq Lake area (Vanier and Lafrance, 2020).

The stratigraphic units occupying the DSkuu are the Sainte-Hélène, Estre, Pingasualuit and Erik Cove complexes. The Kuugaq Suite is also part of the domain. All these units are affected by the DSkuu’s main deformation. 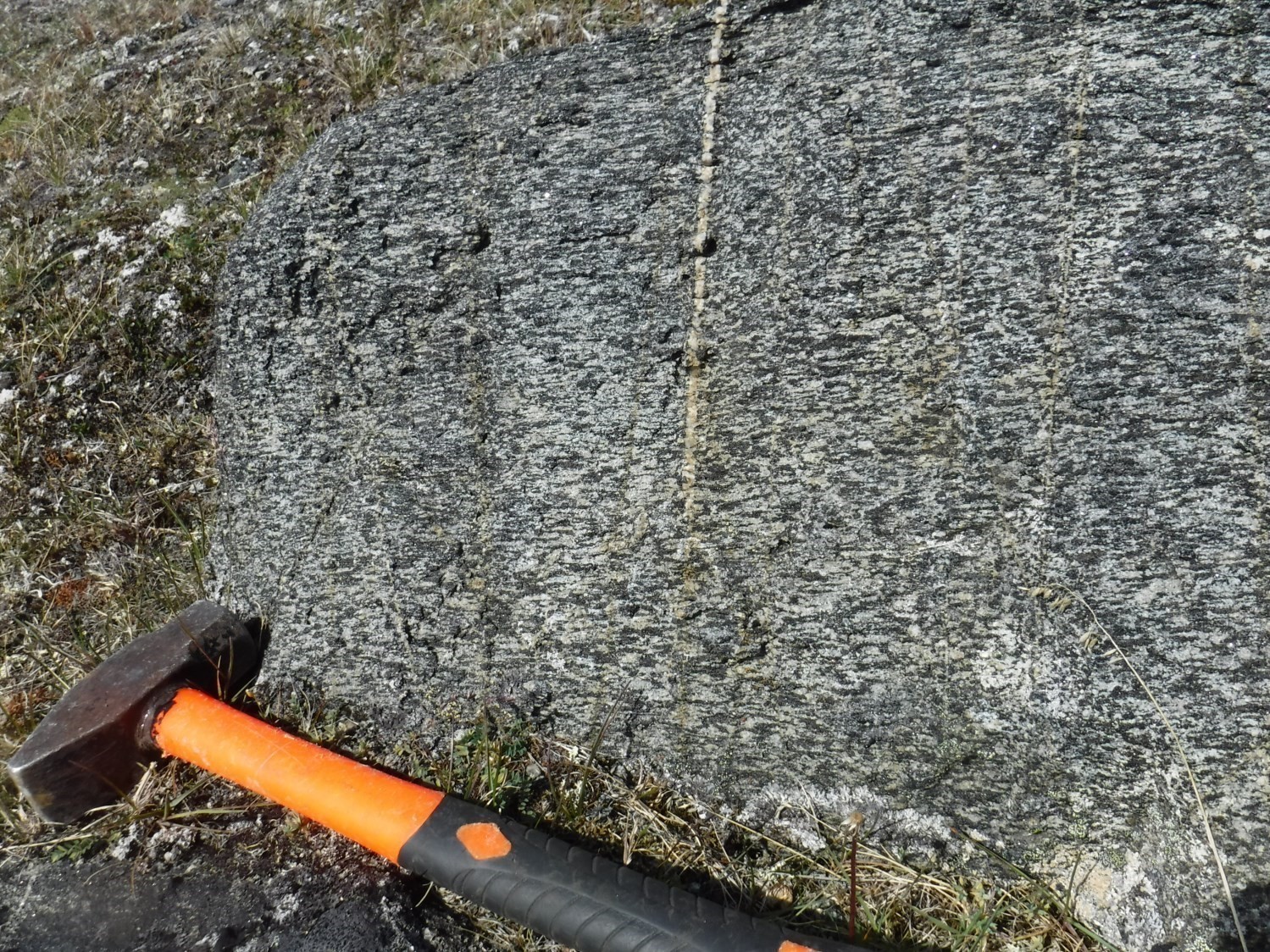 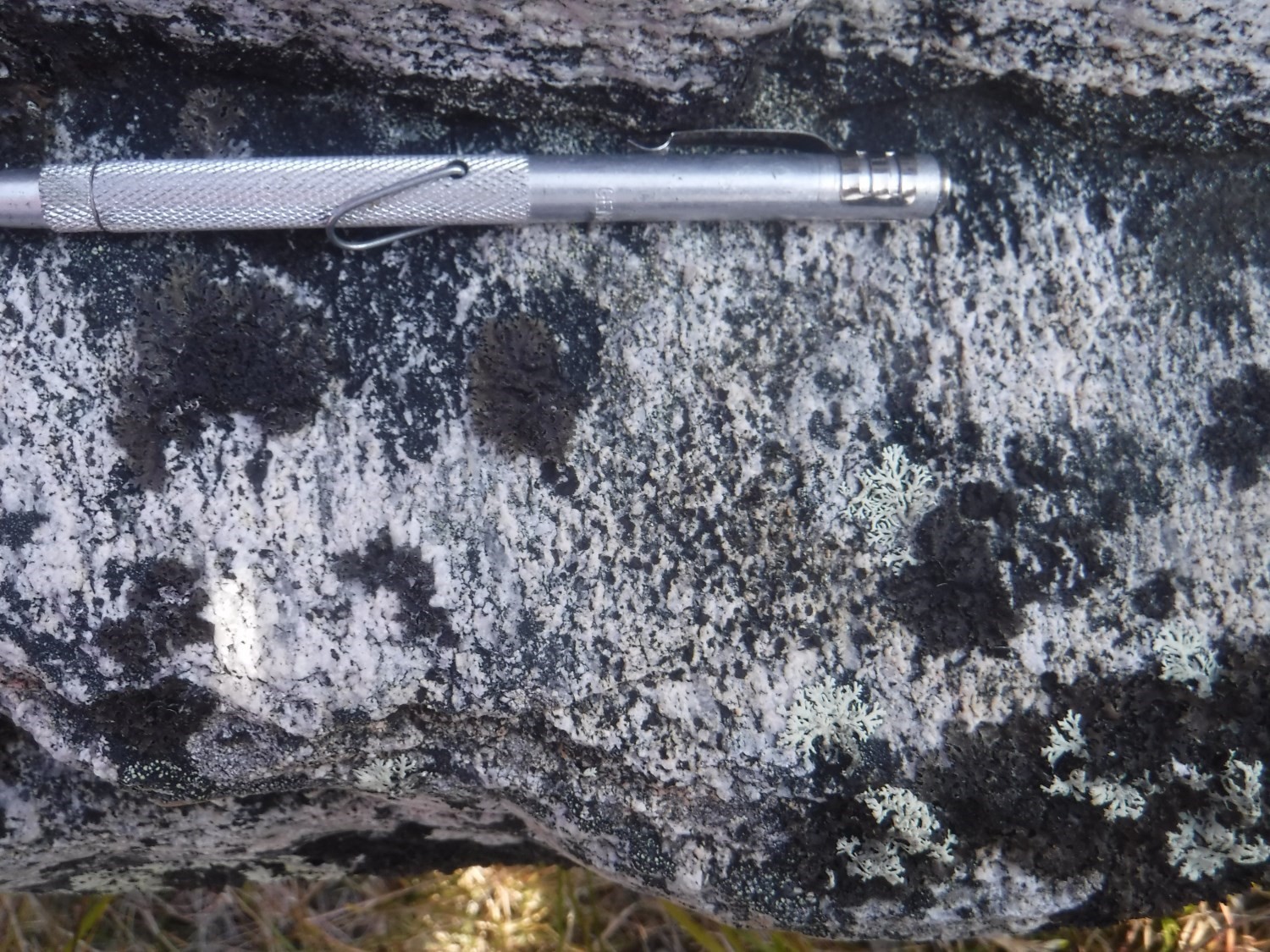 Dominant fabrics in the  DSkuu are subhorizontal foliation and lineation. Foliation measurements are slightly oriented NW. Lineations are concentrated along a WNW-ESE direction. These fabrics are evenly spread over the majority of the DSkuu. Felsic rocks are foliated to gneissic. Foliation runs parallel to gneissosity in places where mineral segregation caused by metamorphism is greater. Some stratigraphic units present in the DSkuu (e.g. the Sainte-Hélène Complex) are characterized by compositional banding parallel to foliation. Quartz is generally stretched in millimetric lenses. In intermediate or mafic rocks, elongated ferromagnesian mineral clusters mark the mineral lineation. These two types of structure are parallel. 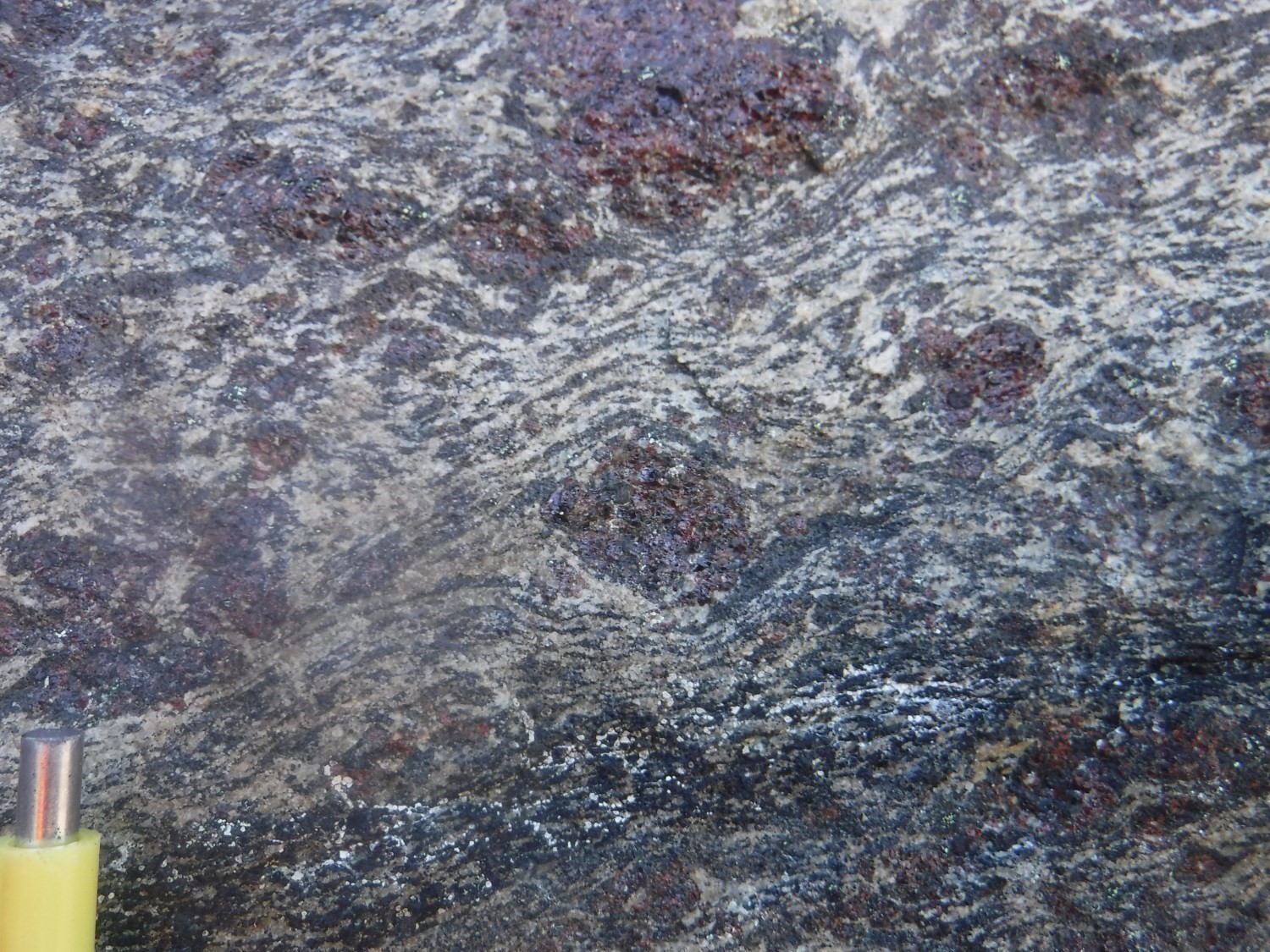 A subhorizontally dipping shear zone was observed in the NW part of the DSkuu (outcrops 19-MV-1053 and 19-MV-1055). Mafic to ultramafic rocks of the Pinguasualuit Complex have been mylonitized over decimetric to metric thicknesses. Garnet poekiloblasts and associated pressure shadows define an eastwrad normal movement. C’-type structures indicate the same kinematics. This movement along a subhorizontal structure (foliation at 300°/07° and lineation at 073°/05°) has not been observed elsewhere in the DSkuu nor in the Narsajuaq Lithotectonic Domain. It is difficult to include this structure in the regional structural scheme. Since this structure of limited thickness having such a low dip is erratically exposed in the hilly territory, the shear zone is not mapped.

The term homogeneous is used to define the structural style of the DSkuu since, overall, there is little variation in the orientation of structures and the intensity of deformation. In places, the foliation’s subhorizontal dip causes a disorganized pattern that is not observed for linear structures, which are constant over the whole domain. In general, the DSkuu is marked by a clear foliation or gneissosity bearing stretching of quartz indicating moderate deformation. Zones of intense deformation exist, but are not widespread; the same is true for areas with little deformation.

The northern part of the DSkuu shows a potentially different deformation style. Aeromagnetic maps show concentric structures which are not fully corroborated by measured structures. The latter are more disorganized than in the rest of the domain. The general pattern of this zone can be interpreted as roughly forming a basin.

Stromatic texctures present in the DSkuu indicate partial melting under tectonic constraints. This migmatitic banding runs parallel to foliation and gneissosity measurements, indicating that partial melting occurred during the main deformation of the DSkuu. Thus, the minimum degree of metamorphism is estimated at the upper amphibolite facies.

Geophysical characteristics of the DSkuu are varied. To the south, there are strong positive anomalies associated with the Pingasualuit Complex. These anomalies trace generally WSW-ENE lineaments whose visibility diminishes eastward. The central part displays a homogeneous pattern of residual magnetic field that gradually varies from east to west from weak to strong. The northern end of the DSkuu is occupied by a circular positive anomaly surrounded by a ring of medium intensity. Concentric structures are clearly visible on maps of the vertical gradient of the residual magnetic field and the magnetic tilt angle (Intissar et al., 2014).

No chronological constraints are available in the DSkuu. The best estimate for the main deformation period is to assume, as for the adjacent Routhier and Siukkaq domains, that it is concomitant with the partial melting event in the Narsajuaq Lithotectonic Domain from 1880 Ma to 1806 Ma (Davis and Sutcliffe, 2019; Vanier and Lafrance, 2020).