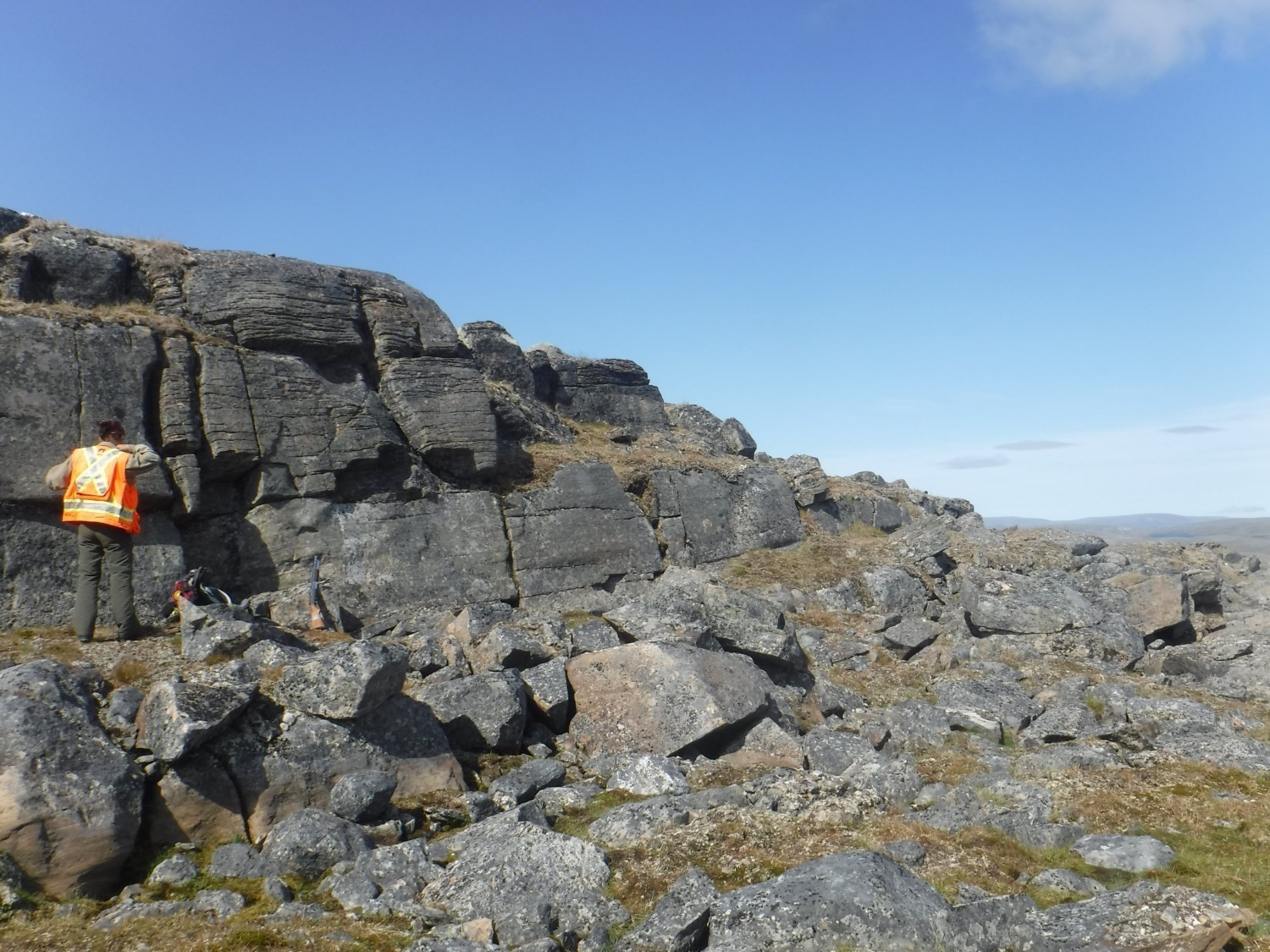 This record is based on interpretation of geophysical imaging and information collected from geological survey carried out in the summer of 2019 in the Sirmiq Lake area (Vanier and Lafrance, 2020).

The NE part of the Sources Domaine (DSsou) is bordered by the Hudson Strait and the Routhier Structural Domain (DSrou) forming a dome. The interface with the latter possibly corresponds to a shear zone of indeterminate nature. The eastern part of the DSsou is also in contact with the Kuuruq Structural Domain (DSkuu). This contact is marked by a change in foliations’ dip which are subhorizontal to the east, in the Kuuruq Domain. In the southern part of the DSsou, the intensity of deformation gradually increases near the boundary with the Sugluk Shear Zone (SZCsug). The attitude of the main fabrics and the kinematics are similar for these two structural units, but the Sugluk Shear Zone is characterized by  more intense and less diffuse deformation. The Sources Structural Domain continues to the west and north (outside the area mapped in 2019) and likely extends to Hudson Bay to the west, and to the Naujaat Shear Zone to the north.

Structural attributes of the DSsou are recorded within the main metamorphosed intrusive rocks of the Narsajuaq Lithotectonic Domain, mainly the Estre and Pingasualuit complexes and the Navvaataaq Suite. Similarly, they are observed in metasedimentary rocks of the Erik Cove Complex and the Paleoproterozoic Frichet, Suluraaq and Sanningajualuk intrusive suites.

Most of the outcrops belonging to the Sources Domain display a tectometamorphic foliation or gneissosity containing a stretch or mineral lineation. These fabrics are easily correlated between outcrops. Thus, the foliation trace was defined by combining aeromagnetic lineaments with structural measurements taken in the field. The latter is parallel to geological contacts. In addition, no fabric superimposition was observed on outcrops. Thus, all structural measurements correspond to Sn and Ln fabrics. The DSsou has been divided into four subdomains in order to better represent certain areas affected by regional bends in the structural grain. 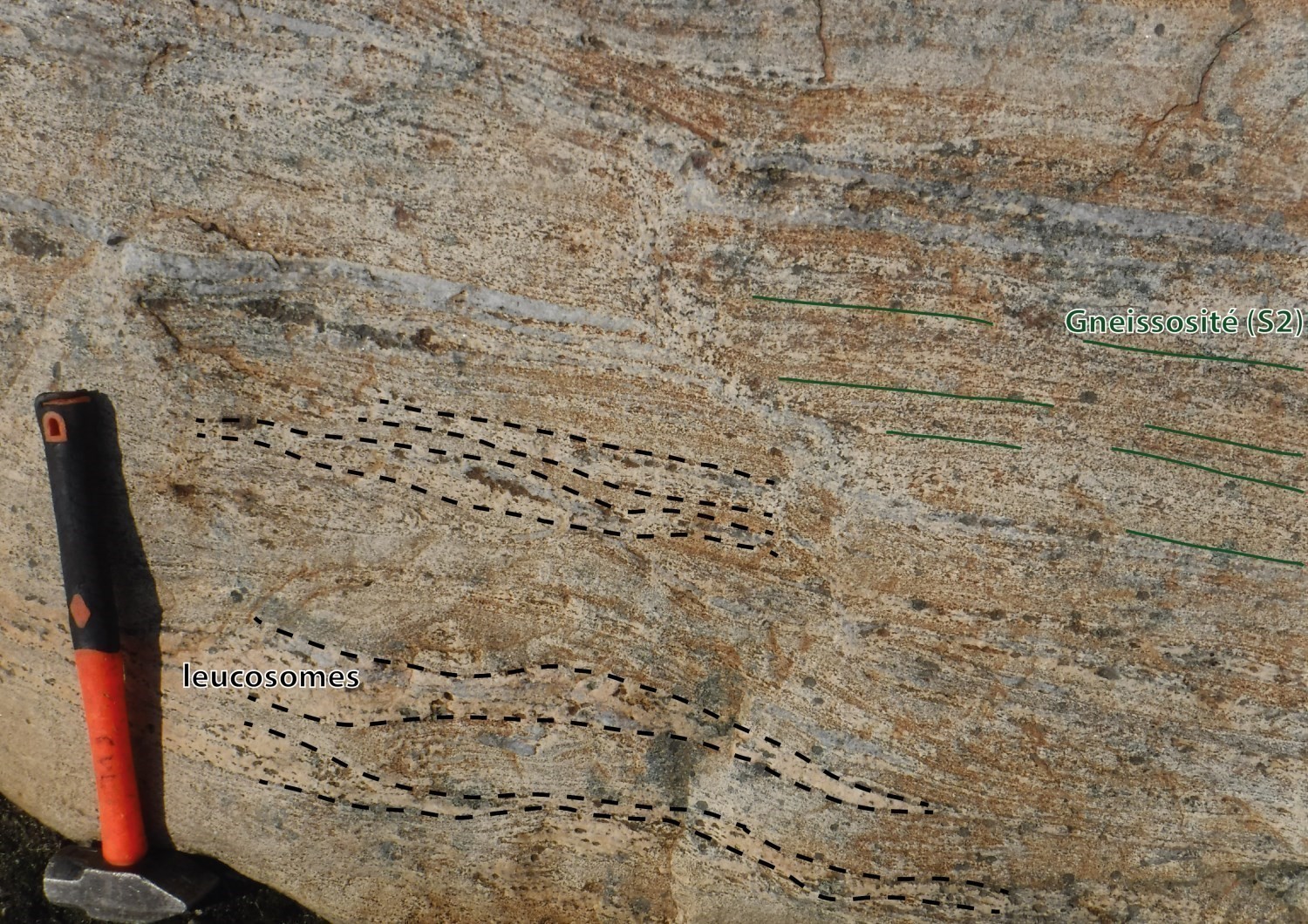 Planar fabrics are commonly characterized by an alignment of ferromagnesian minerals, regardless of the type of lithology. Within banded or gneissic rocks, compositional variations in the bands also highlight the planar fabric, as do stromatic textures found in metatexites. Some more intensely deformed outcrops show straight gneissosity and important stretching of quartz which forms elongated lenses. This type of fabric is mainly present in the northern and southern parts of the Sources Domain. The stretch lineation is mainly defined by quartz, although feldspar may also show stretching. As for mineral lineation, it is defined by the alignment of ferromagnesian minerals. 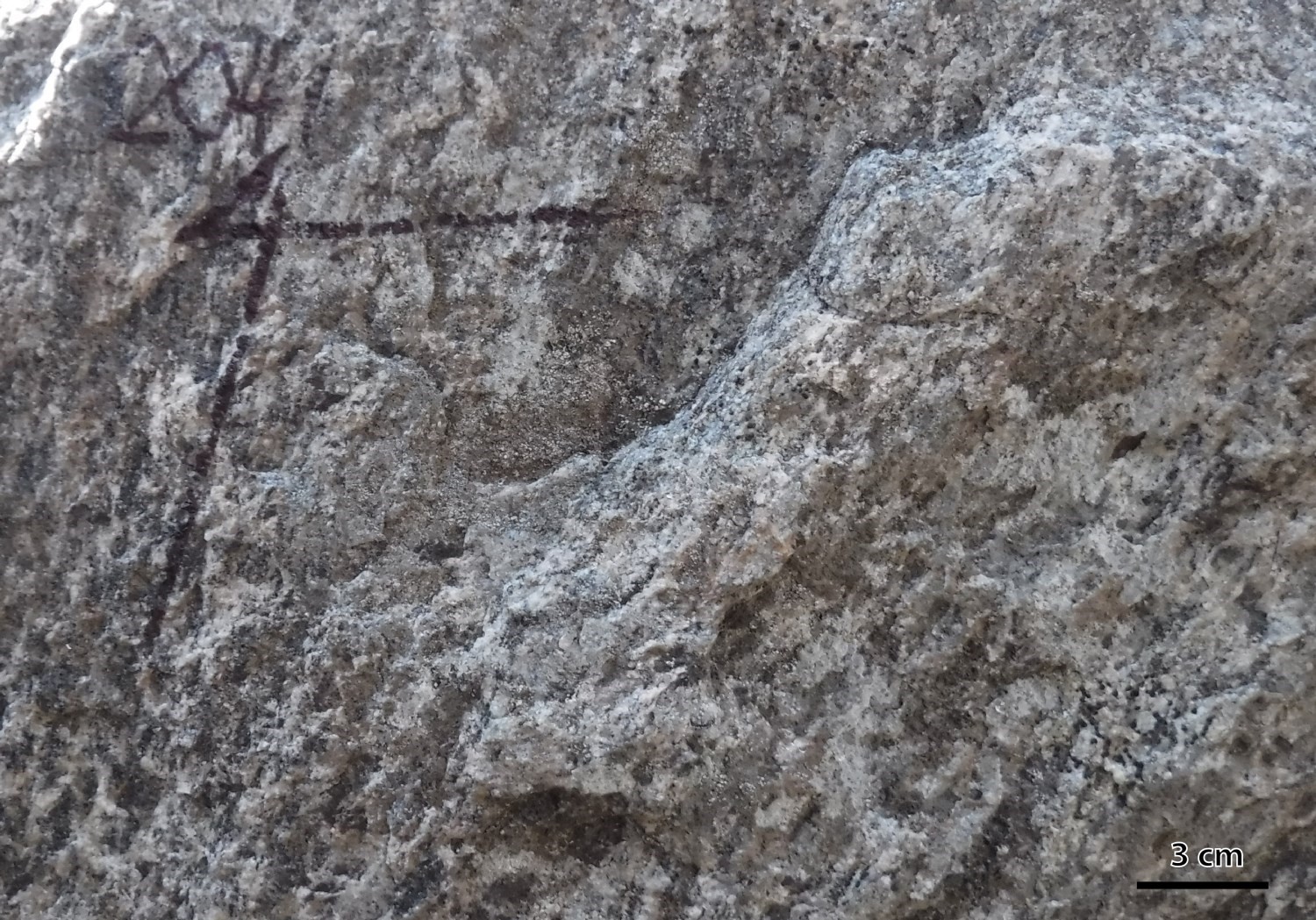 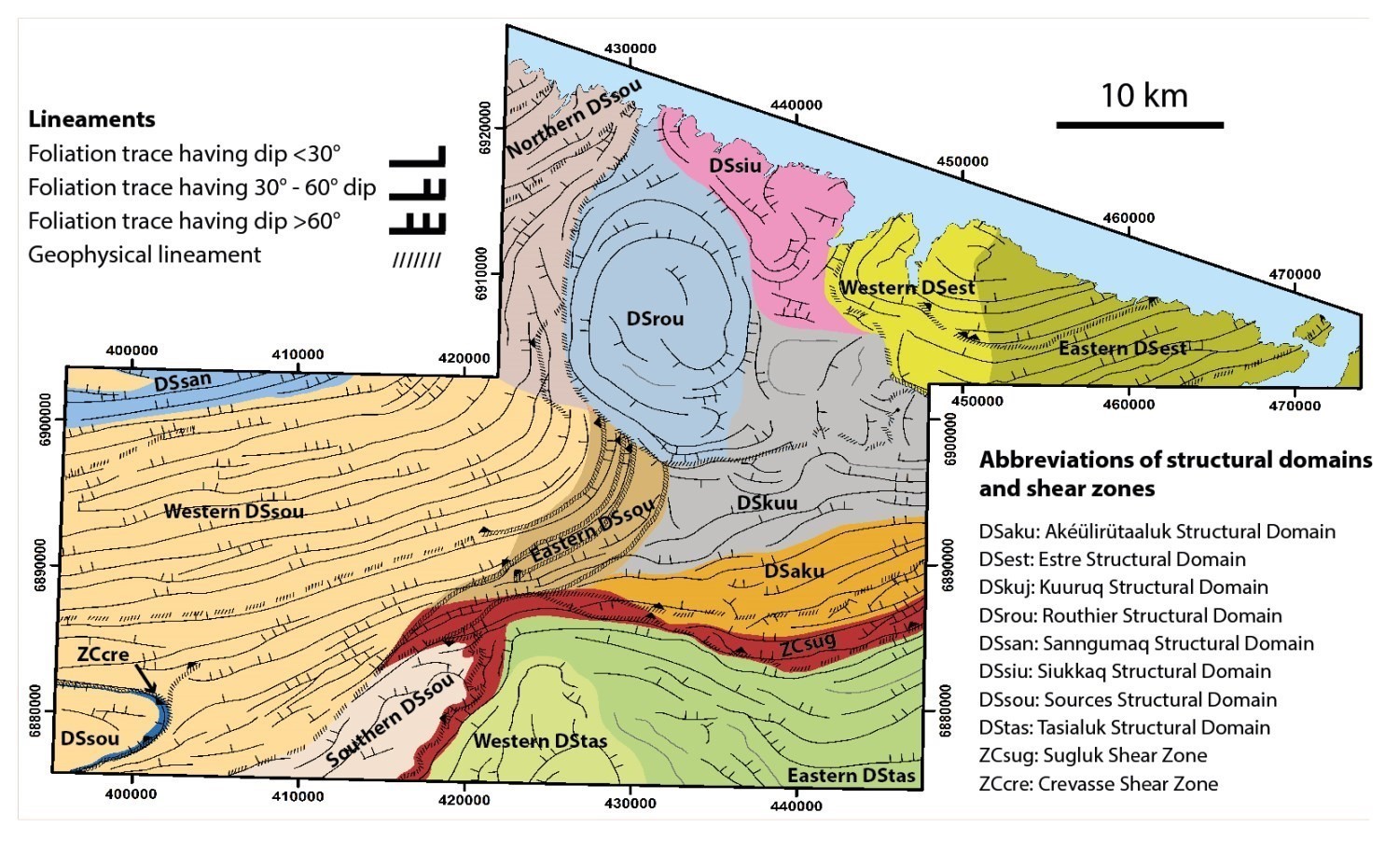 Overall, the Sources Structural Domain is not characterized by the presence of folds. However, open folds with long flanks dipping towards the NW have been observed in the eastern part of the DSsou. These folds explain the few foliation measurements whose dip is in the SE direction. In addition, the repetition of stratigraphic units acting as marker layers, such as quartzite strips of the Erik Cove Complex, could be interpreted as indicating the presence of folds of similar style at the scale of the DSsou, but their existence remains to be demonstrated. 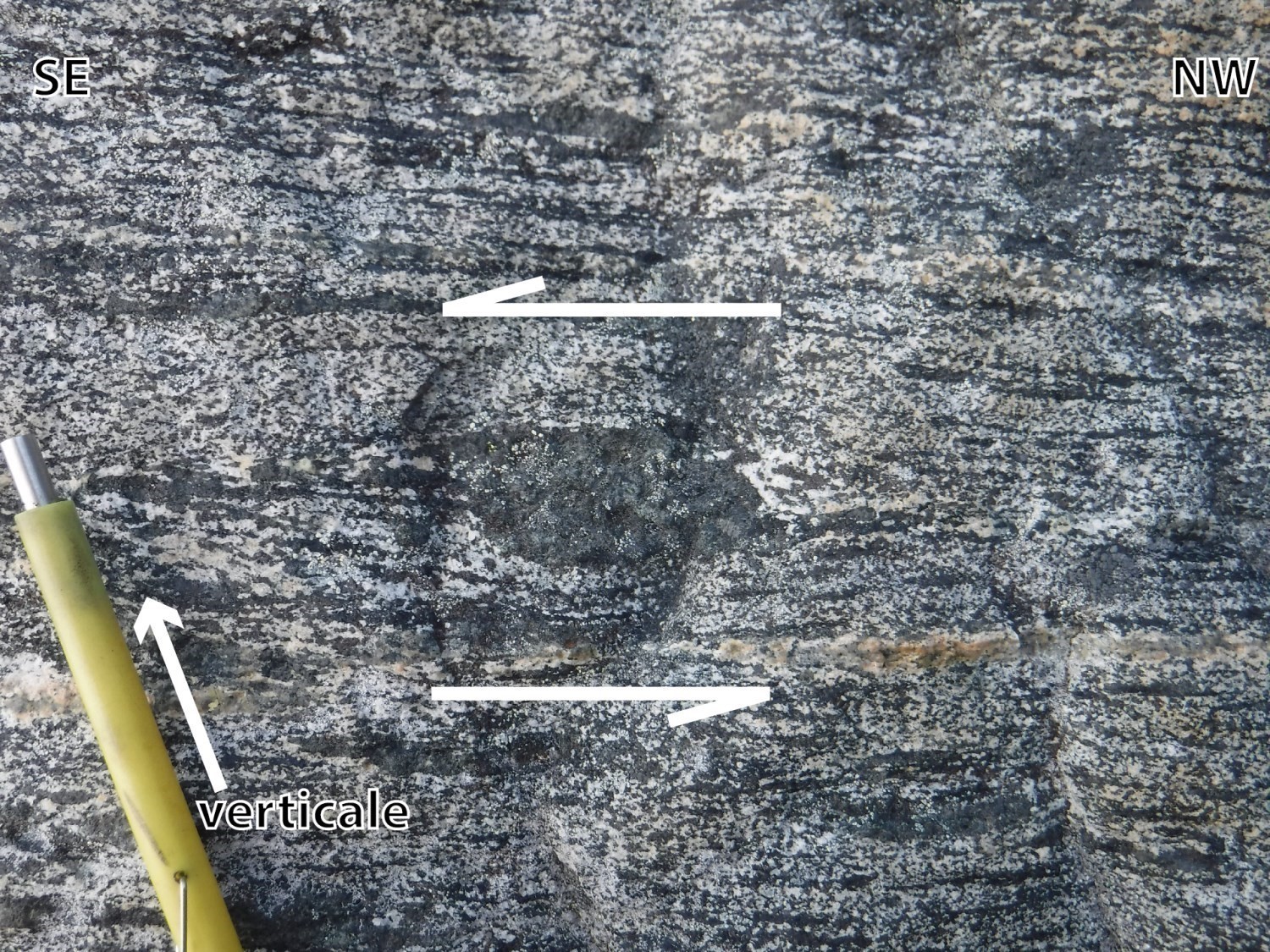 Within the DSsou, some more intense deformation zones contain kinematic indicators. These are mainly present in the eastern part of the DSsou and indicate a reverse movement similar to that observed in the Sugluk Shear Zone (ZCsug). The presence of kinematic indicators in neosomes of migmatites indicates that reverse shearing is contemporaneous with migmatization.

The entire Sources Structural Domain is affected by a moderate to intense penetrative deformation characterized by a parallel fabric continuous between outcrops. In addition, a stretch or mineral lineation is commonly visible. Deformation and metamorphism have obliterated almost all the original stratigraphic relationships. They have also made several protoliths difficult to recognize as they have been transformed into gneiss or stromatic metatexite. This style of unfocused, penetrative deformation with high metamorphic grade is interpreted as an indicator of ductile flow in medium or lower crust (Vanier and Lafrance, 2020).

Field and microscopic observations indicate that the DSsou recorded metamorphism at the granulite facies and that the main deformation took place under these conditions. In outcrop, the presence of stromatic banding parallel to foliation indicates the occurrence of anatectic conditions during deformation (Sawyer, 2008). Leucosomes present within metatexites commonly contain lenticular quartz marking stretch lineation and foliation. Thus, part of the deformation also occurred under subsolidus conditions.

As for feldspar, it occurs as core and mantle, which consists of one or a few old amoeboid-shaped grains having undulatory extinction surrounded by a mosaic of polygonal grains formed by dynamic recrystallization. This type of texture indicates recrystallisztion by subgrain rotation (Guillope and Poirier, 1979; Hirth and Tullis, 1992), which occurs at temperatures >500 °C (Passchier and Trouw; 2005). Finally, metamorphic peak minerals, namely garnet, orthopyroxene and sillimanite, mainly dispaly synkinematic textures.

A few tens representative samples from the DSsou show these types of textures, attesting to the homogeneity of high thermal conditions during deformation.

The Sources Domain is made up of a series of parallel and straight magnetic ridges which give it a highly banded appearance. This banding has allowed to constrain foliation traces associated with it.

The only unit that cuts fabric of the DSsou is the Sanningajualuk Suite, of which a sample taken outside the structural domain has been dated at 1800 ±2 Ma (Parrish, personal communication, 1994). Metamorphic ages obtained for the main units of the Narsajuaq Lithotectonic Domain, and possibly affected by the same deformation event, may provide more revealing temporal constraints. In fact, deformation took place at thermal conditions close to metamorphic paroxysm. In addition, metatexites display stromatic textures parallel to foliation. Within the Narsajuaq Domain, metamorphic ages of 1806 ±38 Ma (Navvaataaq Suite), 1880 ±2 Ma and 1841 ±2 Ma (Pingasualuit Complex; Davis and Sutcliffe, 2018) were obtained.