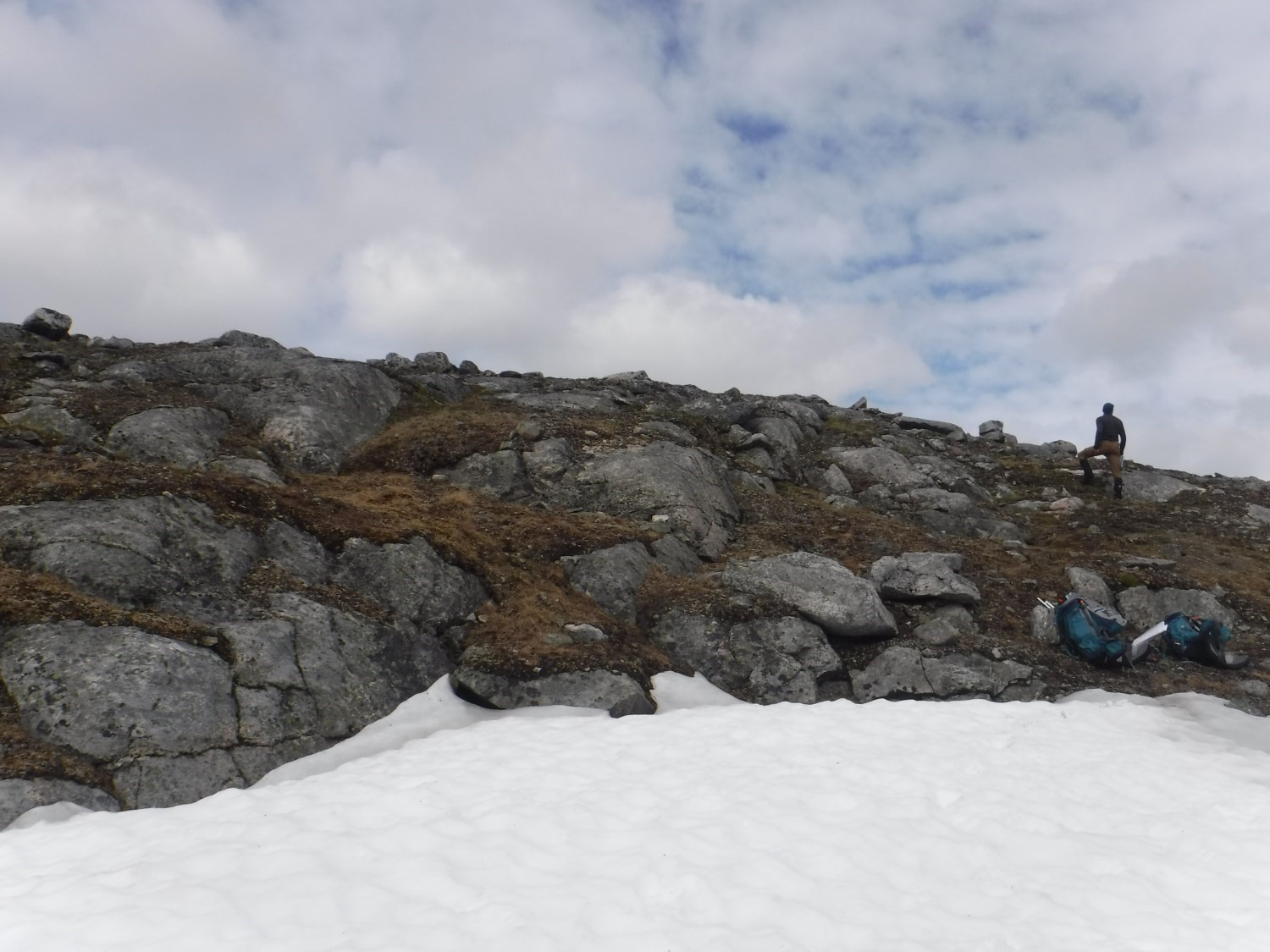 This record is based on aeromagnetic maps’ interpretation (Intissar et al., 2014) and information collected from geological survey carried out in the summer of 2019 in the Sirmiq Lake area (Vanier and Lafrance, 2020).

Direct and indirect observations made it possible to define the extent of the Routhier Structural Domain (DSrou). Firstly, foliation measurements compatible with a structural dome elongated along a N-S axis were integrated into this domain. Between these direct and local information, the geophysical pattern was used, since almost the entire dome is marked by concentric aeromagnetic lineaments forming an ellipse. The DSsrou forms an elliptical dome ~12 km by ~25 km. It is bordered by the Sources, Kuuruq and Siukkaq structural domains to the west, SE, and east respectively. Shear zones having indeterminate movement and moderate dip are presumed to delineate the dome; however, they have not been directly observed.

The DSrou is mainly composed of rocks of the Sainte-Hélène Complex. Some klippes of the Pingasualuit Complex and Kuugaq Suite are also present, as well as late granitic rock masses of the Sannigajualuk Suite. 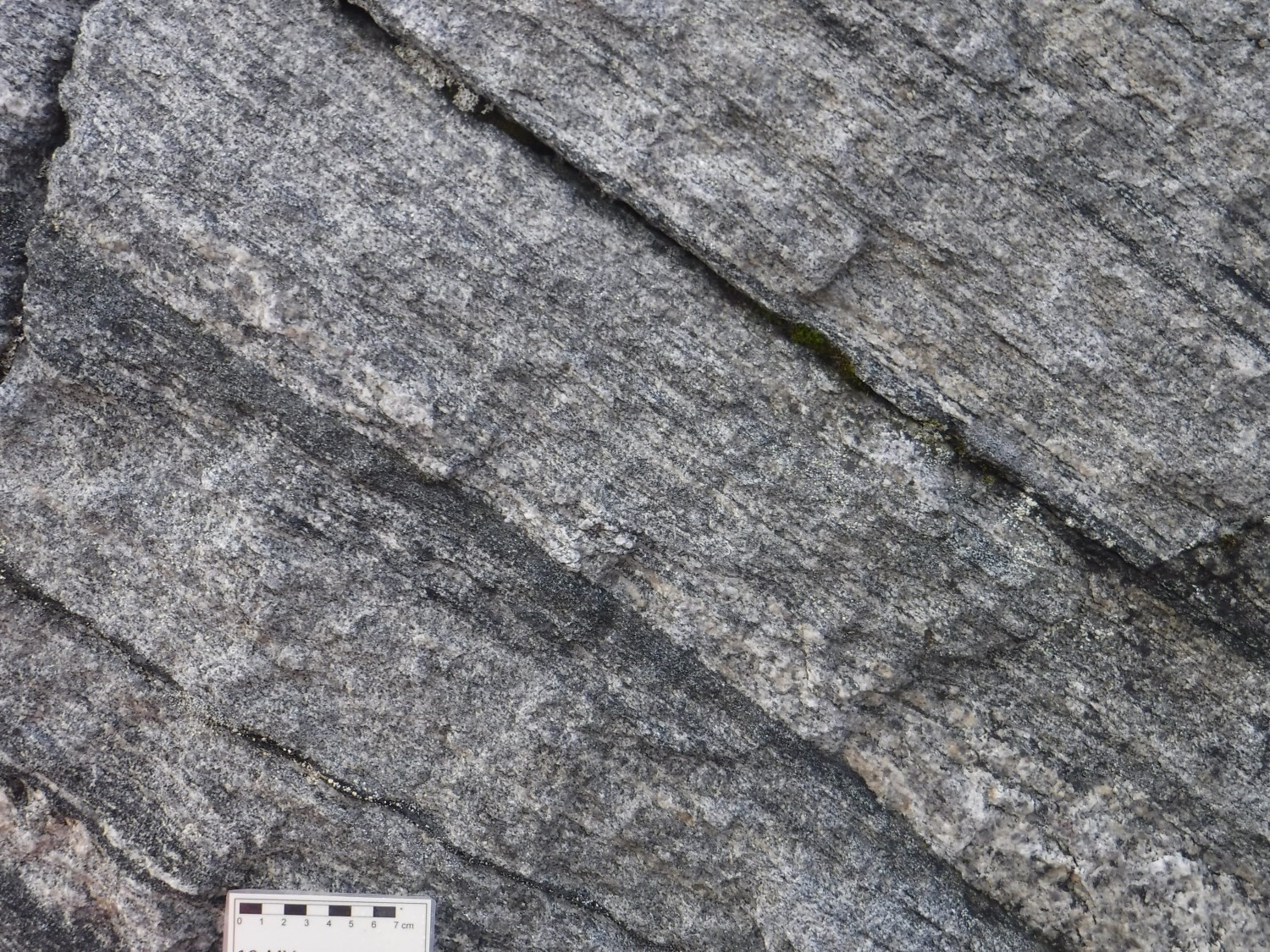 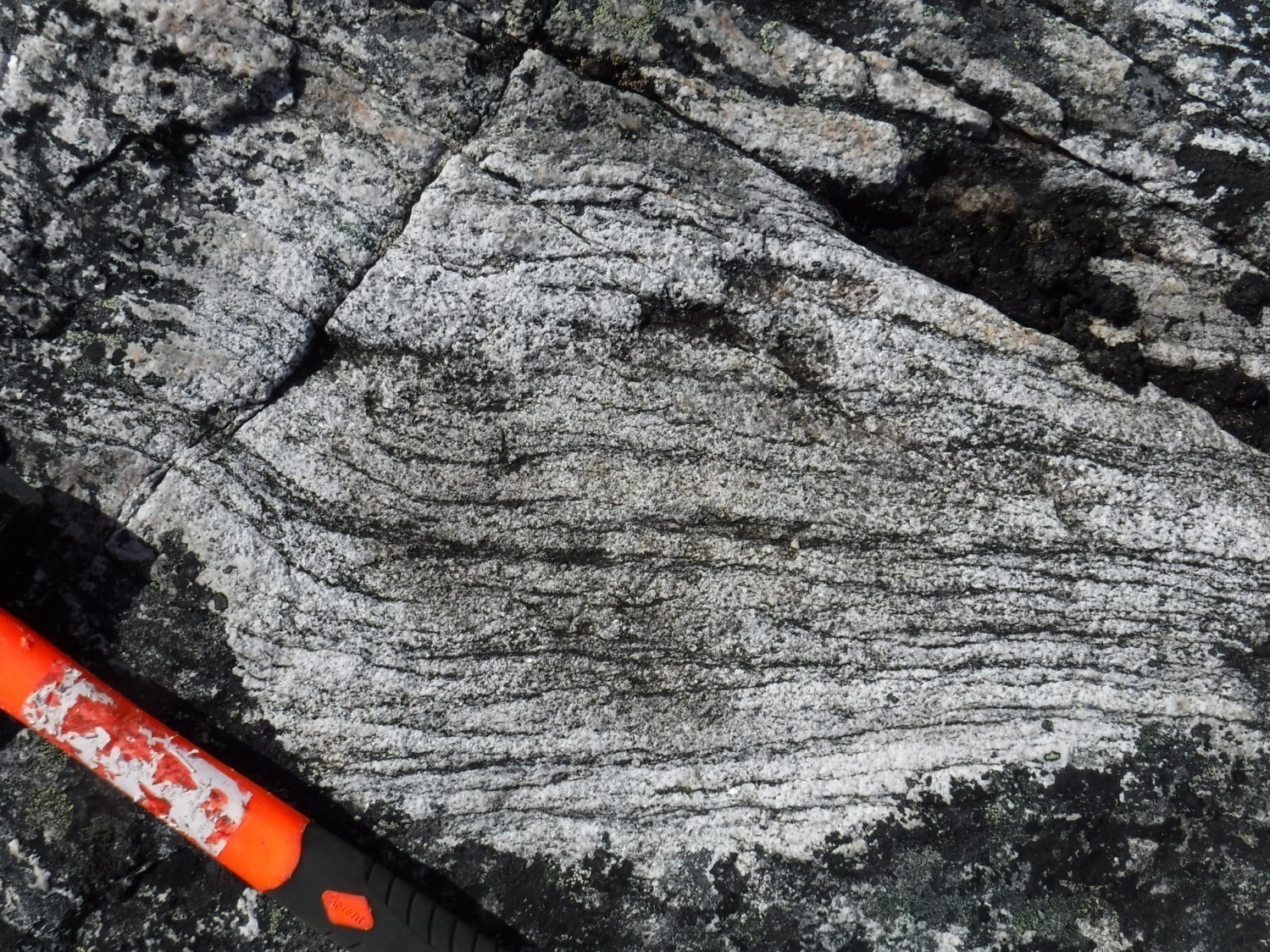 Linear and planar fabrics of the DSrou have a very variable orientation, reflecting both the domed geometry and the presence of some highly migmatized areas. Overall, the foliation and gneissosity’s dip is shallow to moderate (<50°). The same applies to the inclination of lineations which is generally low, commonly <40°. Generally, foliation and gneissosity are straight and regular.

In banded or migmatitic rocks, foliation is accompanied by stromatic or compositional banding mainly defined by grain size and mineralogical variations. Schlierens and melanosome klippes define a planar fabric more irregular than foliation or gneissosity. In areas where partial melting is more advanced, these structures give a creep appearance to the rock. 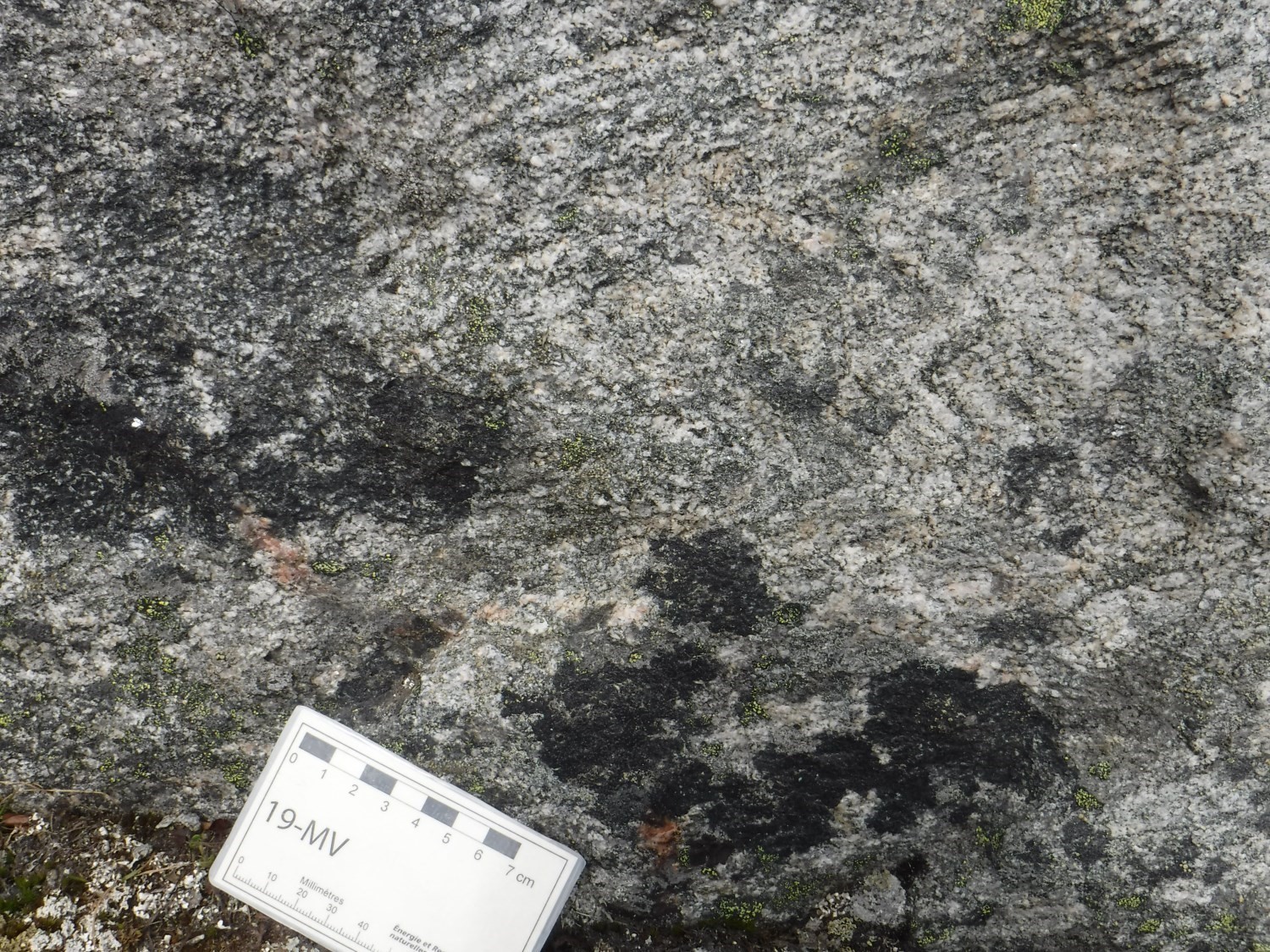 On some outcrops, the foliation is folded by wide (amplitude >10 m) or compressed (decimetric) folds. The former are commonly visible in areas where foliation is subhorizontal. Fold observations do not currently allow any organized pattern to be defined.

The DSrou is a dome consisting mainly of dioritic to tonalitic orthogneiss. The shape of the dome is that of an ellipse whose long axis is N-S oriented. This shape is clearly defined by aeromagnetic lineaments and foliation traces. The intensity of deformation is homogeneous and corresponds to a regular foliation or gneissosity usually consistent between outcrops. However, in areas where foliation is very slightly inclined (<20°), the orientation is variable and disordered in appearance. 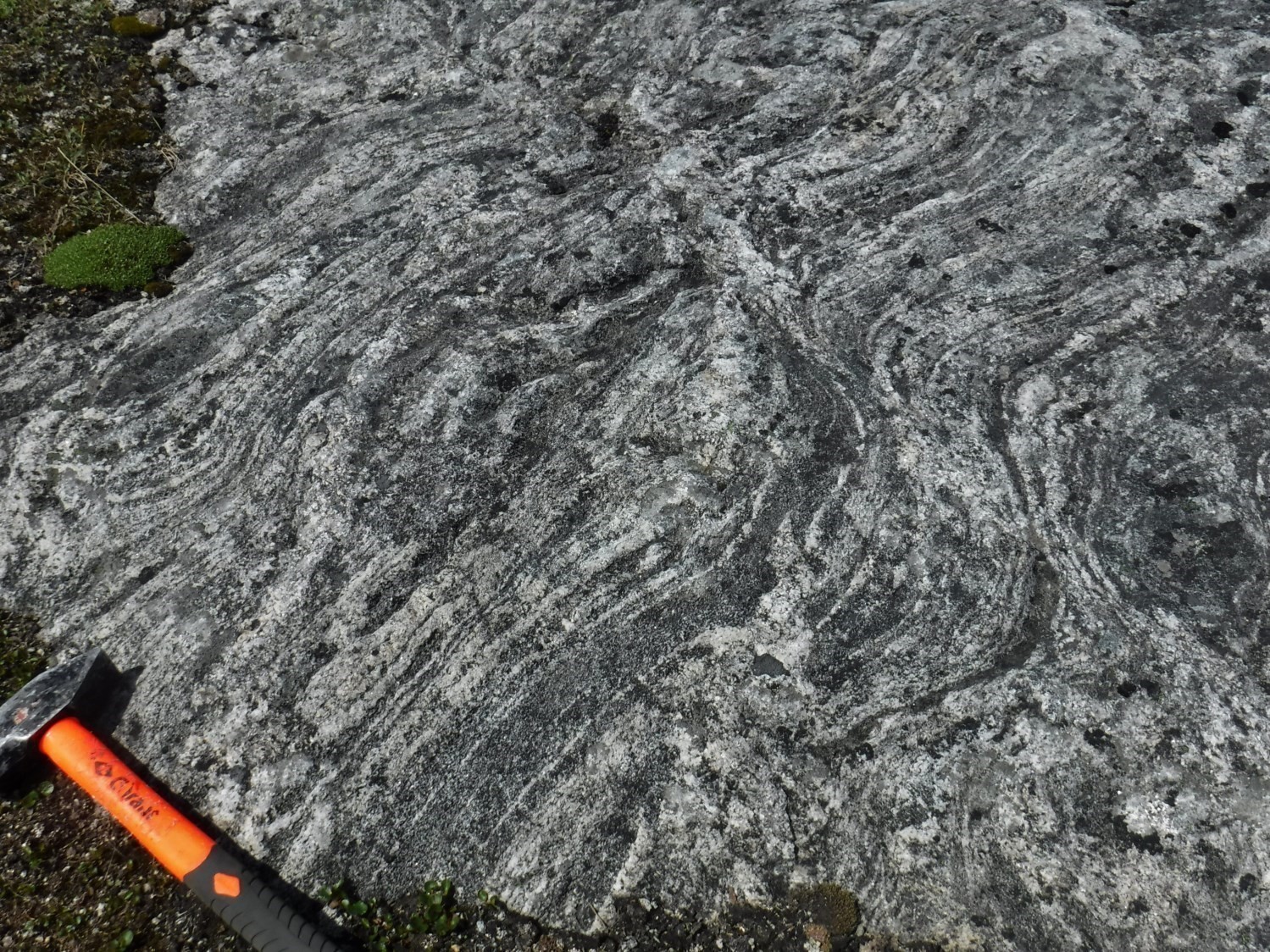 The dominant unit of the DSrou is the Saint-Hélène Complex, which has abundant textures indicative of partial melting such as stromatic banding and various neosomes. Deformation is usually less significant in rocks that have undergone a high partial melting rate than in rocks that appear to be poorly or not migmatized. This indicates that deformation is concomitant with migmatization, so rocks containing high mobilisate contents have recorded less deformation. Stromatic textures form when deformation is simultaneous with anatectic conditions (Sawyer, 2008). Thus, the upper amphibolite facies metamorphic event that caused migmatization of the Sainte-Hélène Complex is also associated with the main deformation.

At the periphery of the DSrou, alternating positive aeromagnetic ridges define ellipses that allow to visualise the general geometry of the dome (Intissar et al., 2014). In the centre, the DSrou has a diffuse aeromagnetic signature that reflects the shallowly dipping geological structures and contacts, which cause little variation in aeromagnetic properties in the horizontal plane.

Deformation in the DSrou mainly affects the Sainte-Hélène Complex, which is of Archean age and which underwent a partial melting event concomitant with the main deformation. There is currently no known metamorphic age in the Sainte-Hélène Complex. However, this episode is likely close to the age of other complexes and suites of the Narsajuaq Lithotectonic Domain, from 1880 Ma to 1806 Ma (Davis and Sutcliffe, 2019; Vanier and Lafrance, 2020), this age range is currently the best estimate for a synkinematic age. The best approximation for a minimum age corresponds to the intrusion of granitic dykes related to the Sannigajualuk Suite at ~1800 Ma (Parrish, personal communication, 1994), since these cut the main fabric in the DSrou.