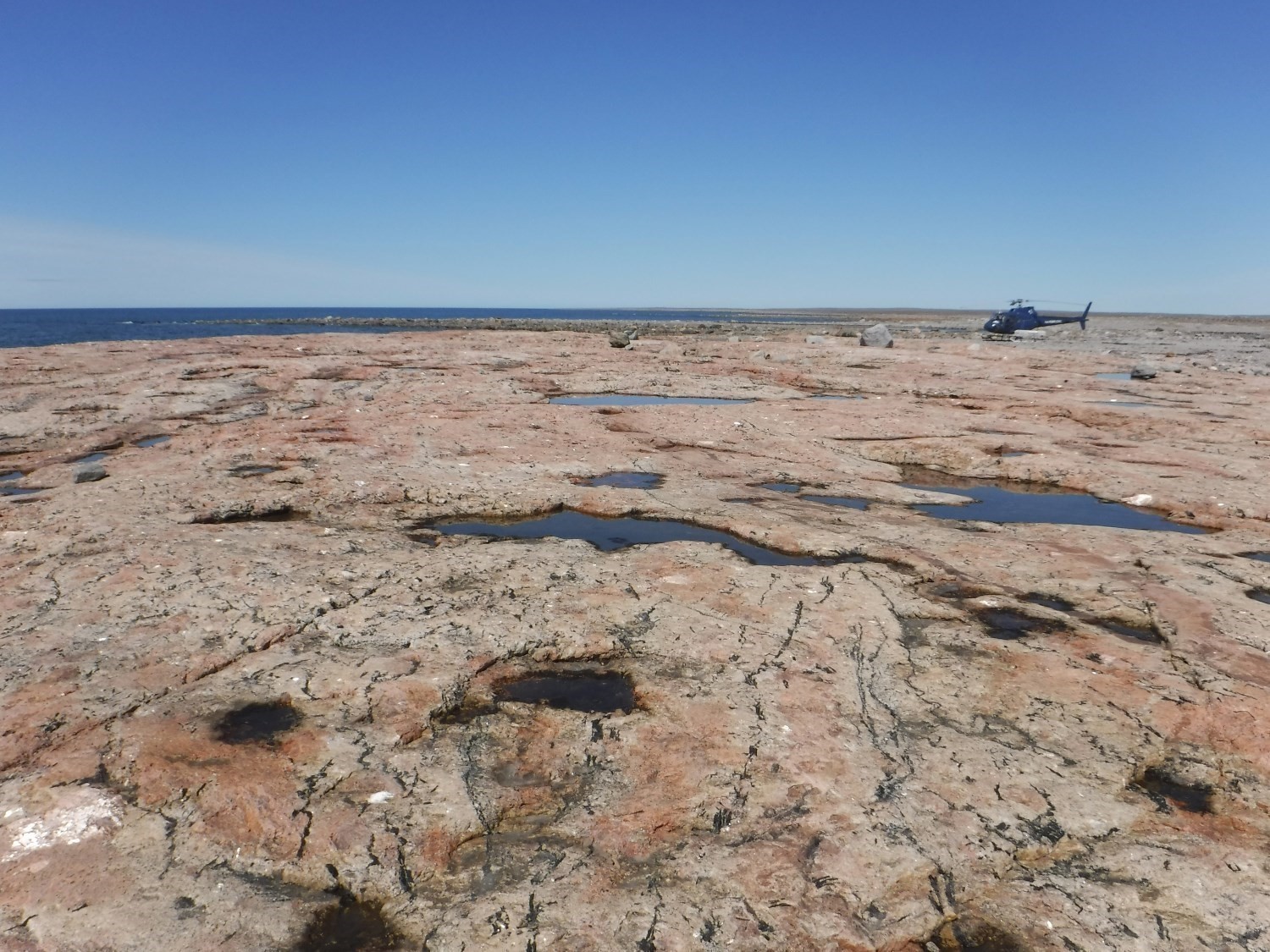 The Sanningajualuk Suite, whose namesake hill is located south of the Inuit community of Ivujivik, was introduced by Charette and Beaudette (2018) to describe late potassic intrusions of the Narsajuac Lithotectonic Domain (formely the Narsajuaq Arc). These intrusive rocks were previously described by St-Onge and Lucas (1992) and St-Onge et al. (1992) as included in the younger plutonic suite of the Narsajuaq Arc, specifically in unit pPNAR4. Dunphy and Ludden (1998) described this suite as an “anatectic suite”. Charette and Beaudette (2018) preferred to distinguish late-orogenic to postorogenic intrusions into different formal units, including the Sanningajualuk Suite, in order to highlight their variable textures, their different intrusion (cross-cutting) and to comply with the North American Statigraphic Code (1983, 2005). This suite has been extended in the Sirmiq Lake area (Vanier and Lafrance, 2020).

The Sanningajualuk Suite is the main unit of late-orogenic to postorogenic intrusions of the Narsajuaq Domain by its volume and distribution over the entire arc’s N-S axis. It is divided into two informal units: the main unit of foliated to massive syenogranite and monzogranite (pPsnn1) and the secondary unit of graphic-textured granite (pPsnn1a). 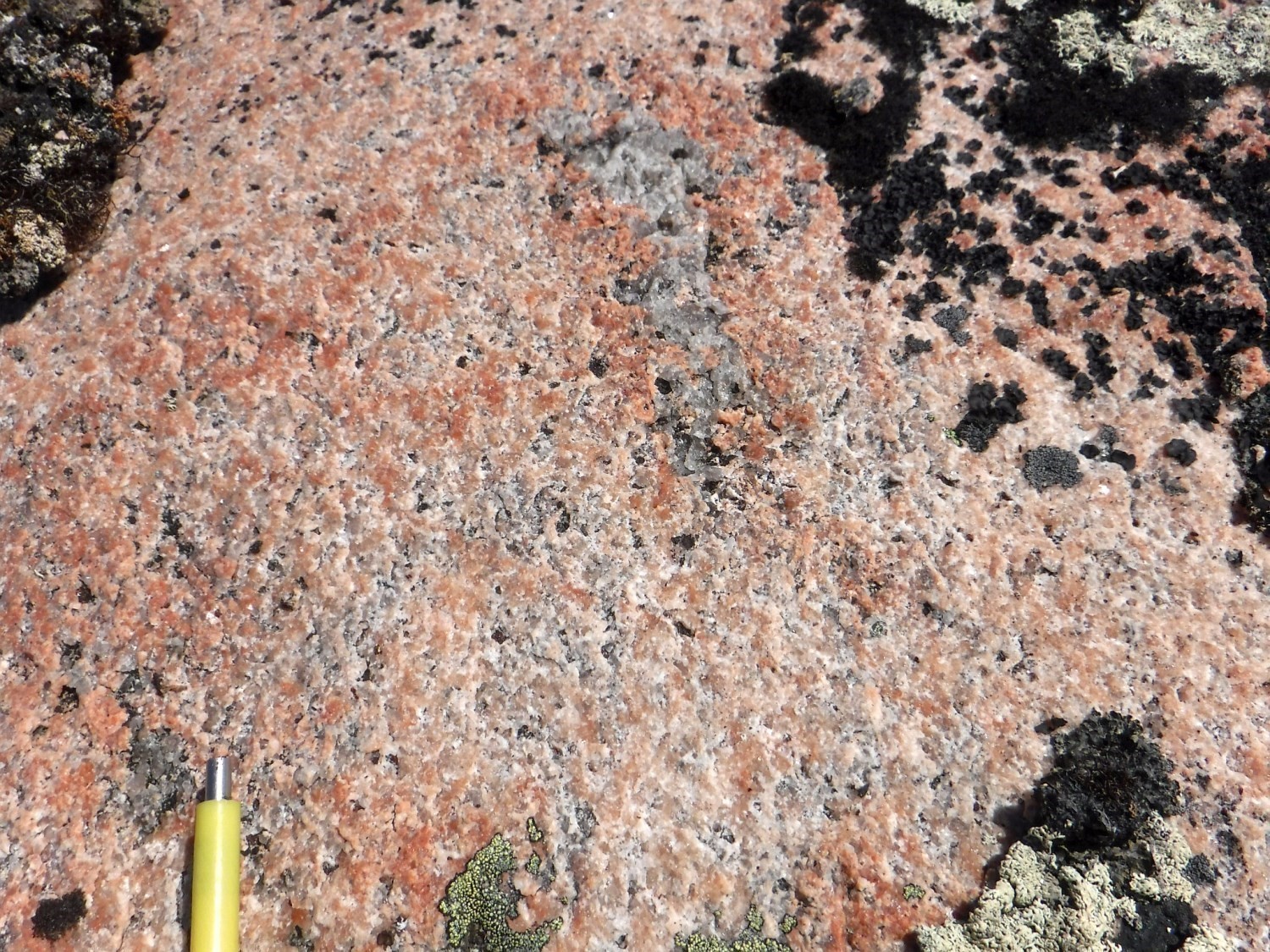 Unit pPsnn1 consists mostly of syenogranite, which is characterized by its pink to reddish pink colour and its low content in ferromagnesian minerals (<10%). This unit includes, in a lesser proportion, a pinkish beige monzogranite with a coarser-grained syenogranitic pinkish phase in bands or diffuse clusters. Syenogranite and monzogranite share the same structural and textural characteristics. At the outcrop scale, both are characterized by fine to coarse grain variation and, in general, traces of hematite. These granitoids usually show weakly-developed foliation, marked by discontinuous millimetric biotite laminae. In close proximity to regional deformation zones, potassic intrusions of the pPsnn1 unit have strong foliation, contain K-feldspar porphyroclasts a few millimetres to one centimetre and, in places, quartz bands or stretch lineation marked by quartz rods.

Petrographic study of the granite indicates that these rocks are formed by several phases in diffuse contact. A coarse-grained phase, usually richer in K-feldspar and with a smaller proportion of ferromagnesian minerals, occurs as diffuse clusters or bands in a main rock, fine to medium-grained. Biotite is the dominant ferromagnesian mineral and is partially chloritized. Hornblende occurs in ferromagnesian clusters in some samples. It is commonly matted and is partially replaced by biotite. Euhedral allanite crystals are generally observed in association with ferromagnesian laminae or clusters. Few accessory minerals, such as apatite, muscovite, epidote and zircon, are observed in thin sections. In deformed zones, the quartzofeldspathic matrix is oriented and has numerous microfractures. Quartz is characterized by subgrain extinction. 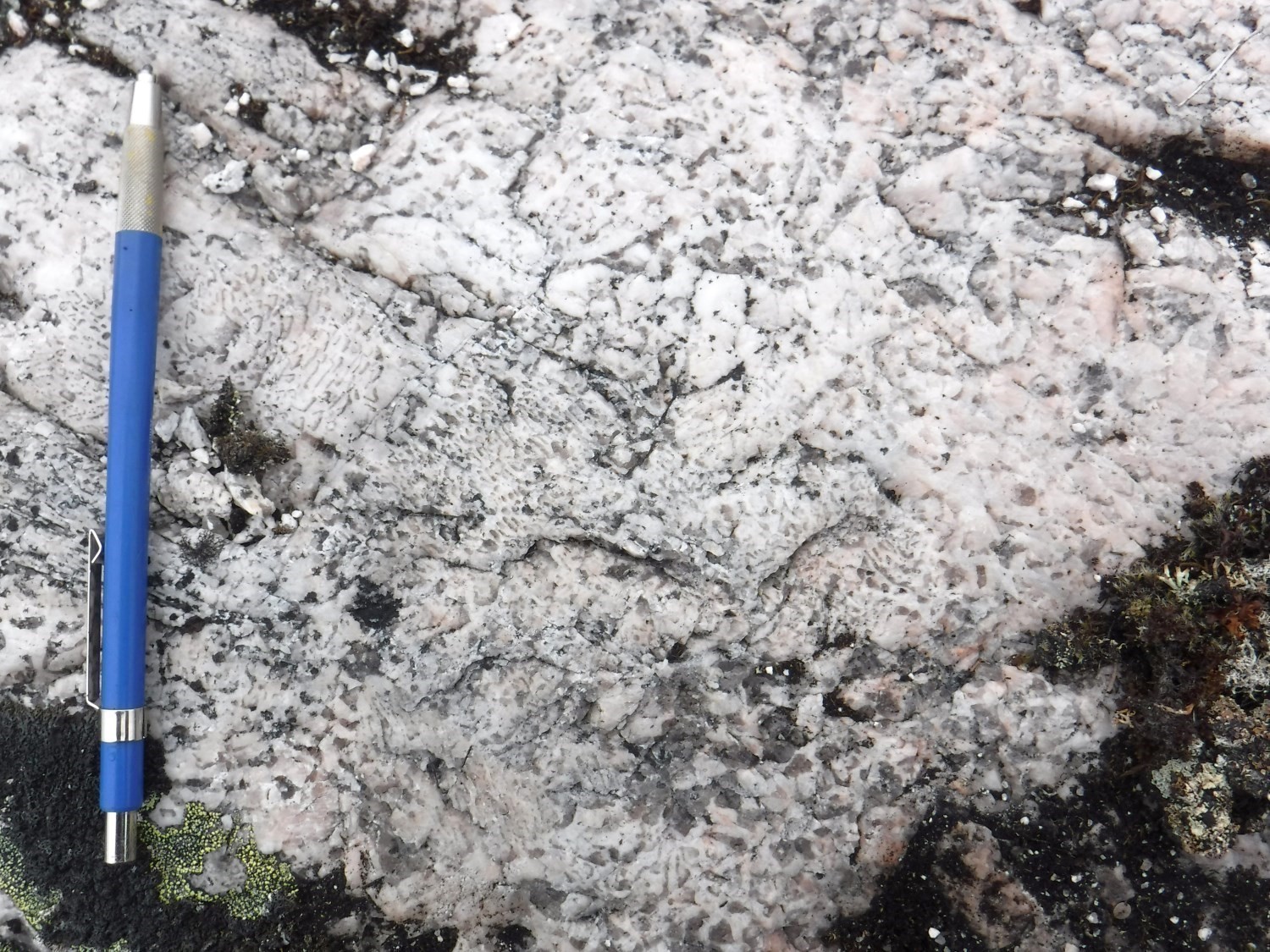 Areas where the Sanningajualuk Suite granite has a graphic texture have been grouped in subunit pPsnn1a. In these areas, grain size ranges from medium to pegmatitic and altered surface colour changes from white to pinkish. In places, K-feldspar crystals can reach decimetric dimensions and usually have graphic texture.

Granitic intrusions of the Sanningajualuk Suite form kilometre-long intrusive masses elongated in the regional tectonic grain. Locally, they are elliptical and cut regional foliation. The largest and most homogeneous mass is located in the Ivujivik village area (sheet 35K05). Granitoids of this suite are also observed as metric intrusions, regular and conformable to subconformable in granulitic rocks of the Narsajuaq Domain.

A historical dating of a granitoid of the Narsajuaq Arc near Ivujivik was associated with the Sanningajualuk Suite. This sample, previously included in the pPNAR4 unit of the Younger plutonic suite by St-Onge and Lucas (1992) and in the Anatectic suite by Dunphy and Ludden (1998), returned a U-Pb age on zircons of 1800 ±2 Ma (Parrish, personal communication, 1994). Sm-Nd isotope analyses on the same sample revealed a Nd epsilon value of -5.6 to 1800 Ma (Dunphy and Ludden, 1998), indicating a likely crustal source. The model age is 2420 Ma (Dunphy and Ludden, 1998).

A second historical sample in a pegmatitic syenogranite cutting the Navvaataaq Suite, also reassigned to the Sanningajualuk Suite, yielded an age around 1758 Ma (Parrish, 1989).

The Sanningajualuk Suite is intrusive into all Archean to Paleoprotezoic units of the Narsajuaq Lithotectonic Domain. The latter are commonly found as metric to kilometric klippes in granitoid masses of the Sanningajualuk Suite. In outcrop, intermediate and mafic rocks (mostly dioritic) occur as partially assimilated centimetric to decimetric enclaves in unit pPsnn1. Granitoids of the Sanningajualuk Suite are cut by metric multigenerational pegmatite dykes that are locally associated with reddish alteration. These pegmatitic dykes include several generations of different orientations that cross-cut each other and which are mainly oriented NNW-SSE. Pegmatites are themselves cut by thinner dykes (5-30 cm) of massive greyish monzogranite. The latter appears to be the last intrusive phase of the Narsajuaq Domain, with the exception of diabase dykes of the Falcoz Swarm and mafic intrusions of the Nauyok Suite whose relationship with the late greyish monzogranite was not observed.