The Cadieux Structural Domain was defined by Beauchamp (2019) following a mapping survey conducted in the Cadieux Lake area in the summer of 2018. It includes intrusive rocks of the Opatica Subprovince. The following description is based primarily on geological observations collected by Beauchamp (2019), as well as analysis of aeromagnetic surveys from SIGÉOM.

The Cadieux Structural Domain is composed of intrusive rocks of the Opatica Subprovince. It comprises the following stratigraphic units: 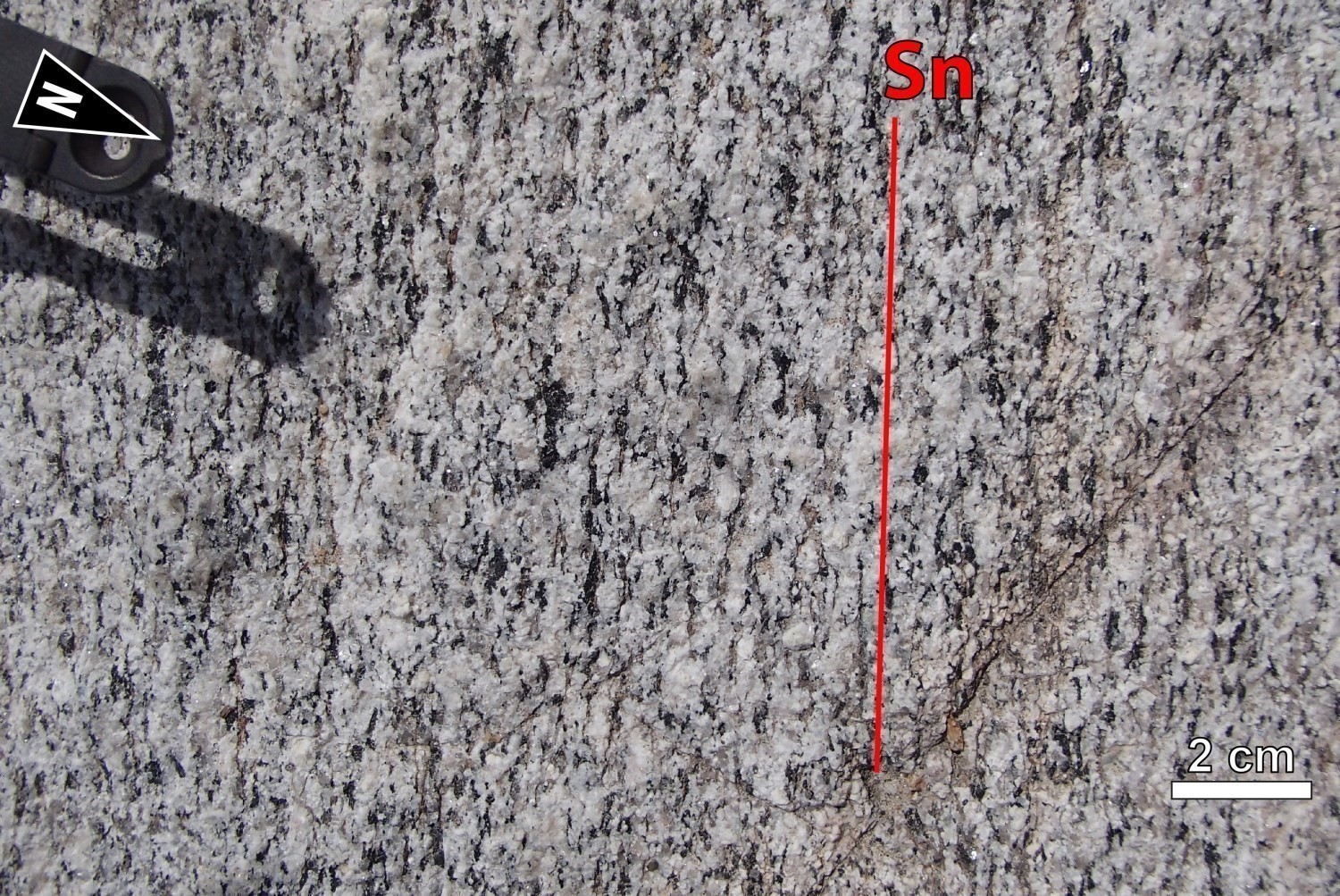 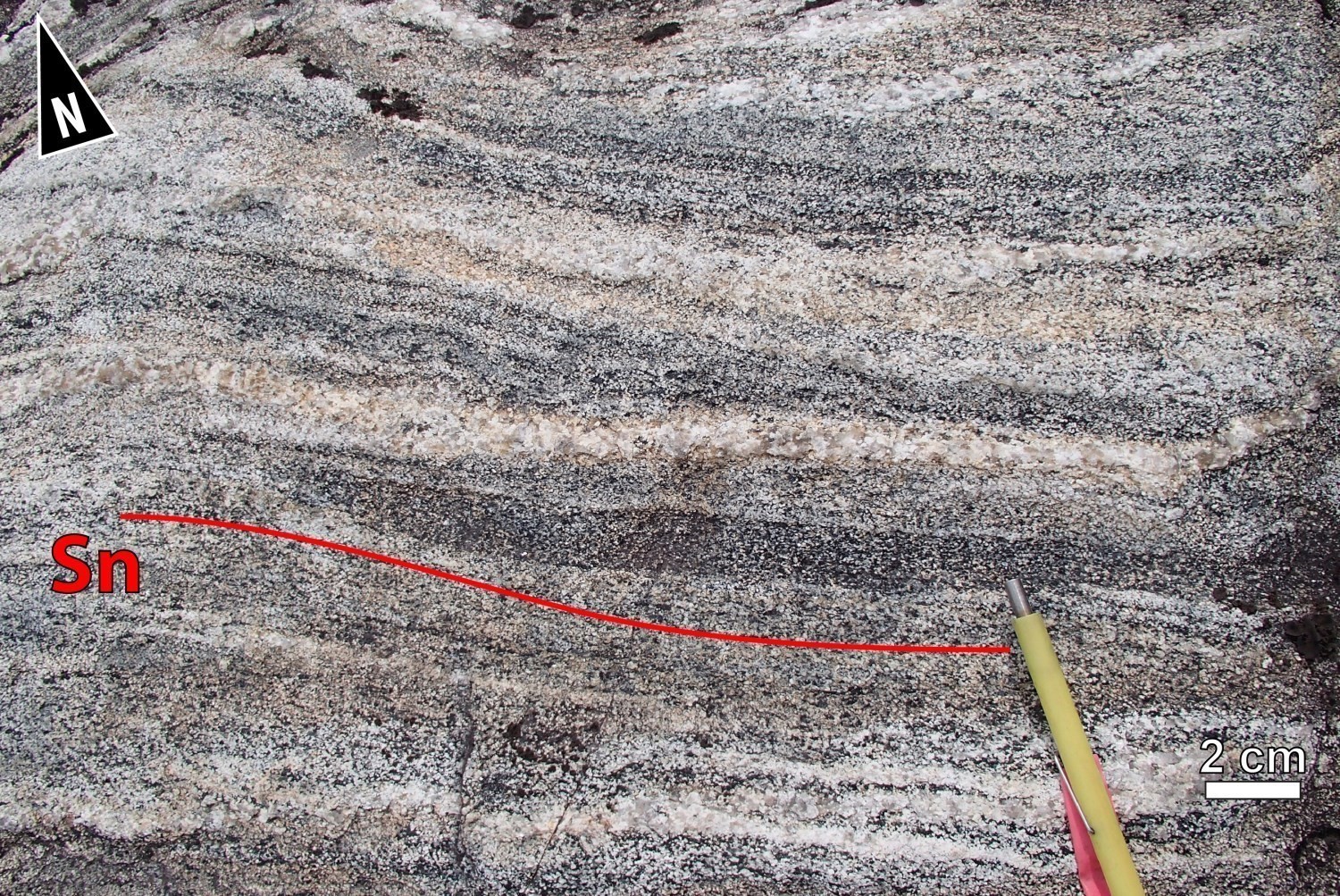 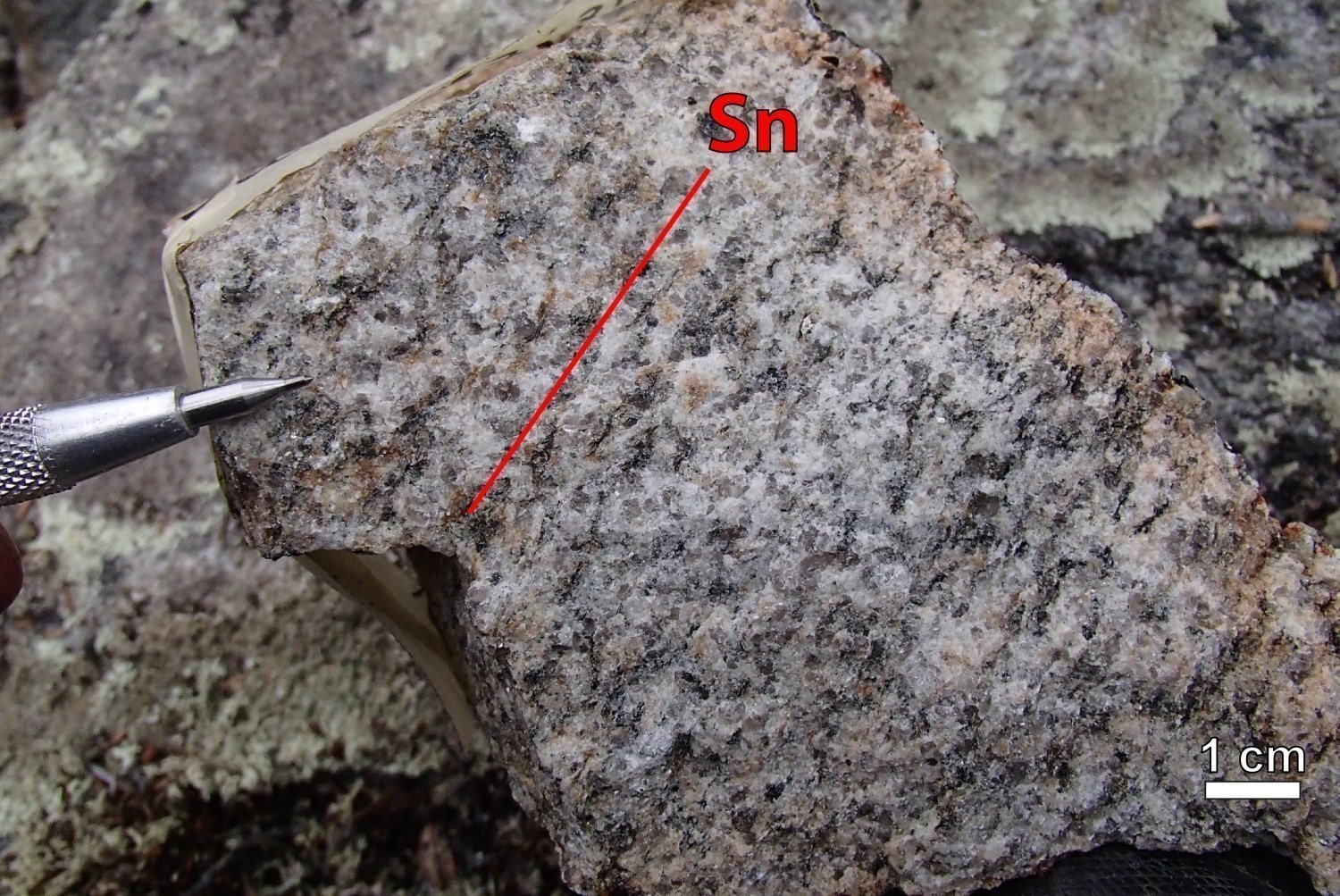 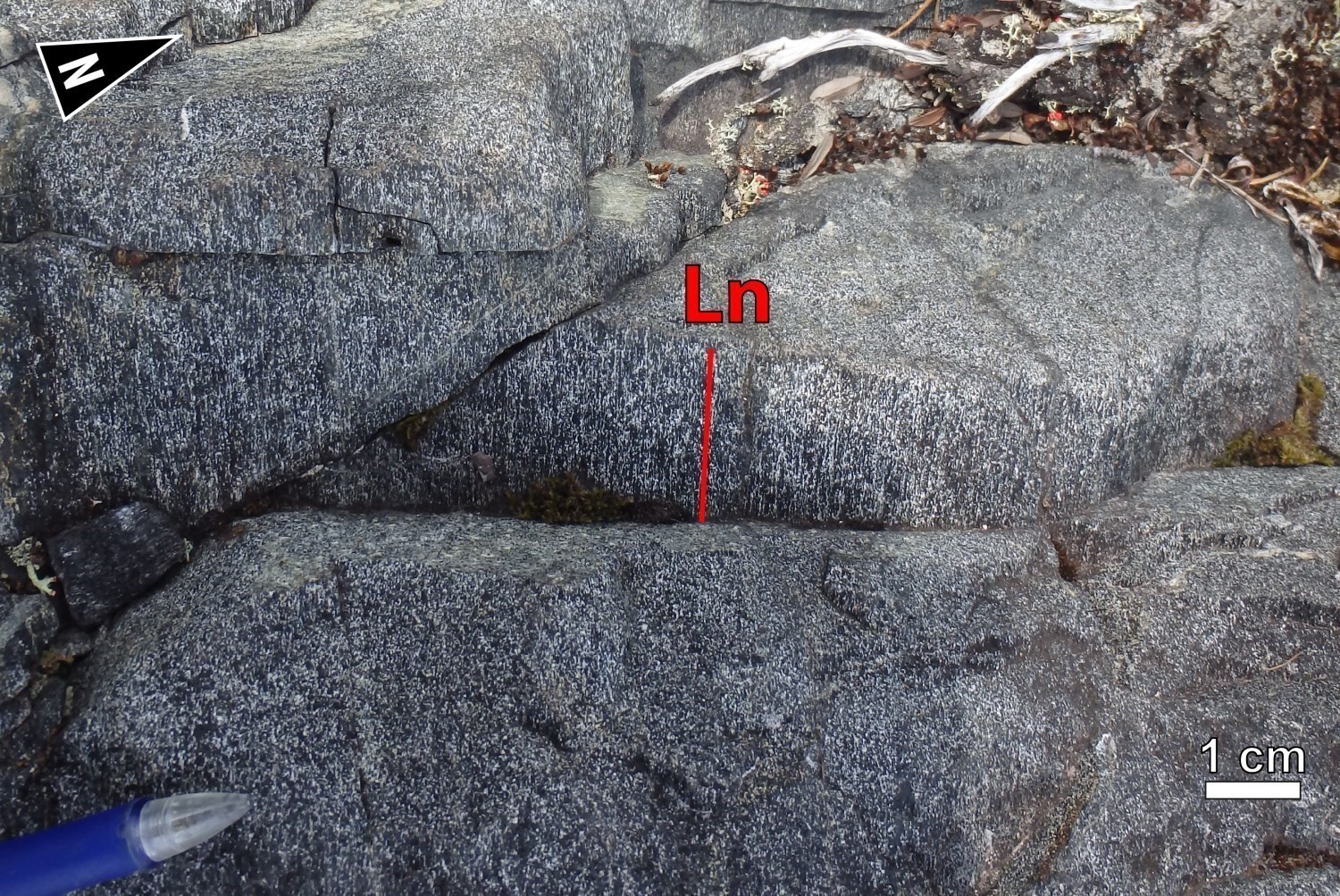 The main Sn fabric present in the Cadieux Structural Domain is a moderately developed penetrative foliation defined by the preferential alignment of ferromagnesian minerals (biotite, hornblende) affecting the MacLeod Batholith and Digne Pluton. Millimetric to centimetric lenses of ferromagnesian minerals and foliated granoblastic diorite enclaves are aligned along the main foliation Sn in the MacLeod Batholith. In the Misasque Complex, the main fabric is rather marked by irregular and contrasting sharp gneissosity, forming alternating mafic (biotite ± hornblende) and whitish quartzofeldspathic layers, and accentuated by the presence of subconformable granitic injections.

The MacLeod Batholith and Misasque Complex are characterized by poorly developed lineations Ln defined by the stretching of hornblende. Lineation Ln is best developed in the southern part of the Digne Pluton, especially approaching the Digne Shear Zone. Lineations Ln are also very present in highly granoblastic diorite and gabbro enclaves found in the Misasque Complex and Digne Pluton. These intermediate to mafic rocks are the oldest units within intrusive suites and commonly form L>S tectonites.

At the scale of the Cadieux Structural Domain, even if foliation Sn seems mainly oriented ENE-WSW and have a moderate dip, its attitude is still variable. On the map, these variations, both in terms of orientation and dip, indicate that it is folded. Foliation Sn locally bears a mineral lineation Ln which often dips towards the NE at a moderate angle. 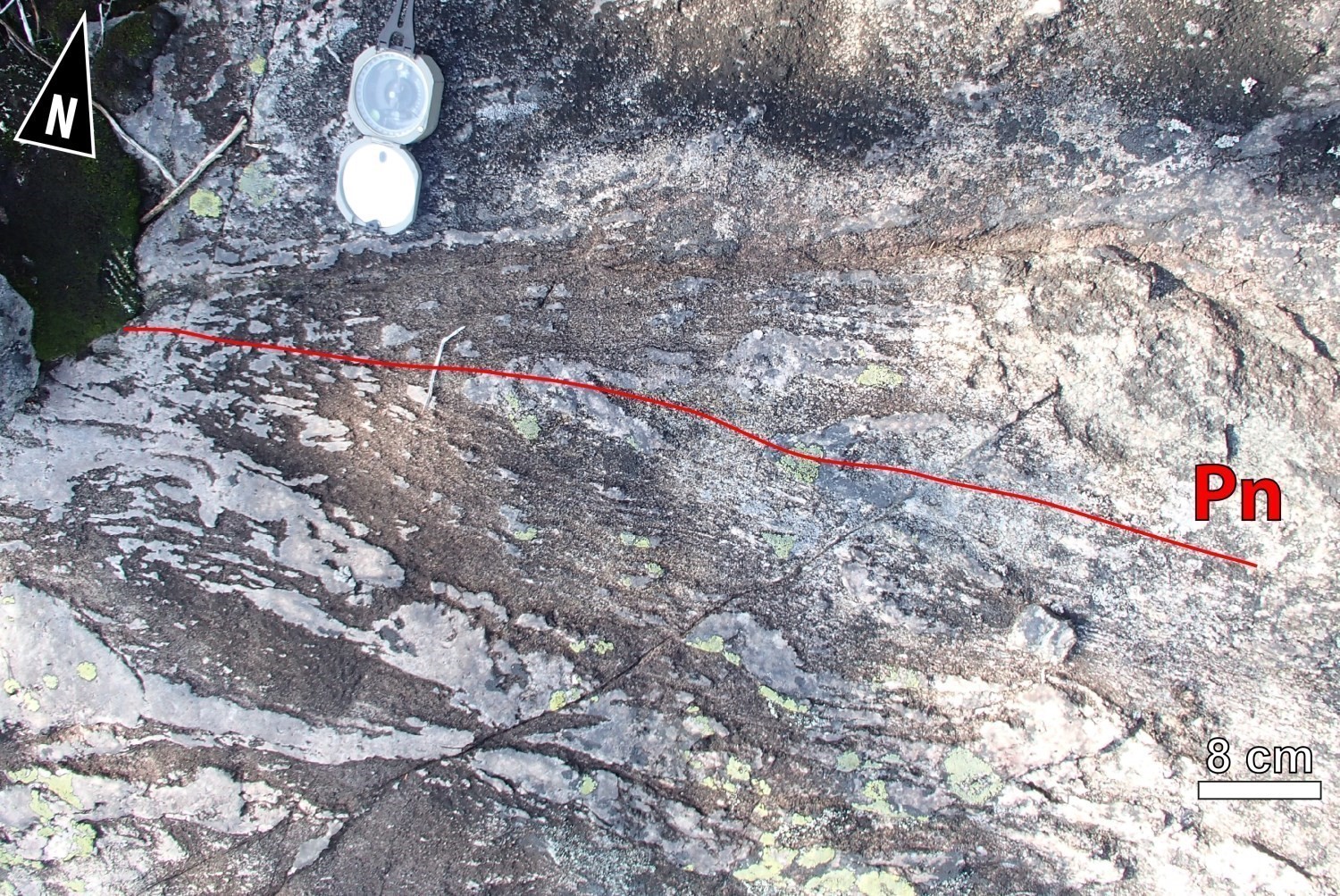 The MacLeod Batholith is structurally very homogeneous. It is foliated by Sn, and a mineral lineation Ln is present in places. Magnetic maps available on SIGÉOM (tilt and vertical gradient) and Rapid Eye Imagery indicate that the MacLeod Batholith is affected by a succession of antiformal and synformal folds. However, a very small percentage of outcrops visited exhibited folding. Outcrop 18-FM-2075, located at the edge of the batholith, exposes diorite intensely deformed by a succession of tight to isoclinal folds. The E-W axial trace is particularly evident in felsic injections and silicified zones which are folded and in positive relief in diorite. Outcrop 18-PG-4080 also reveals that quartz monzodiorite and granitic injections are folded by Pn. The MacLeod Batholith appears to be saucer-shaped. 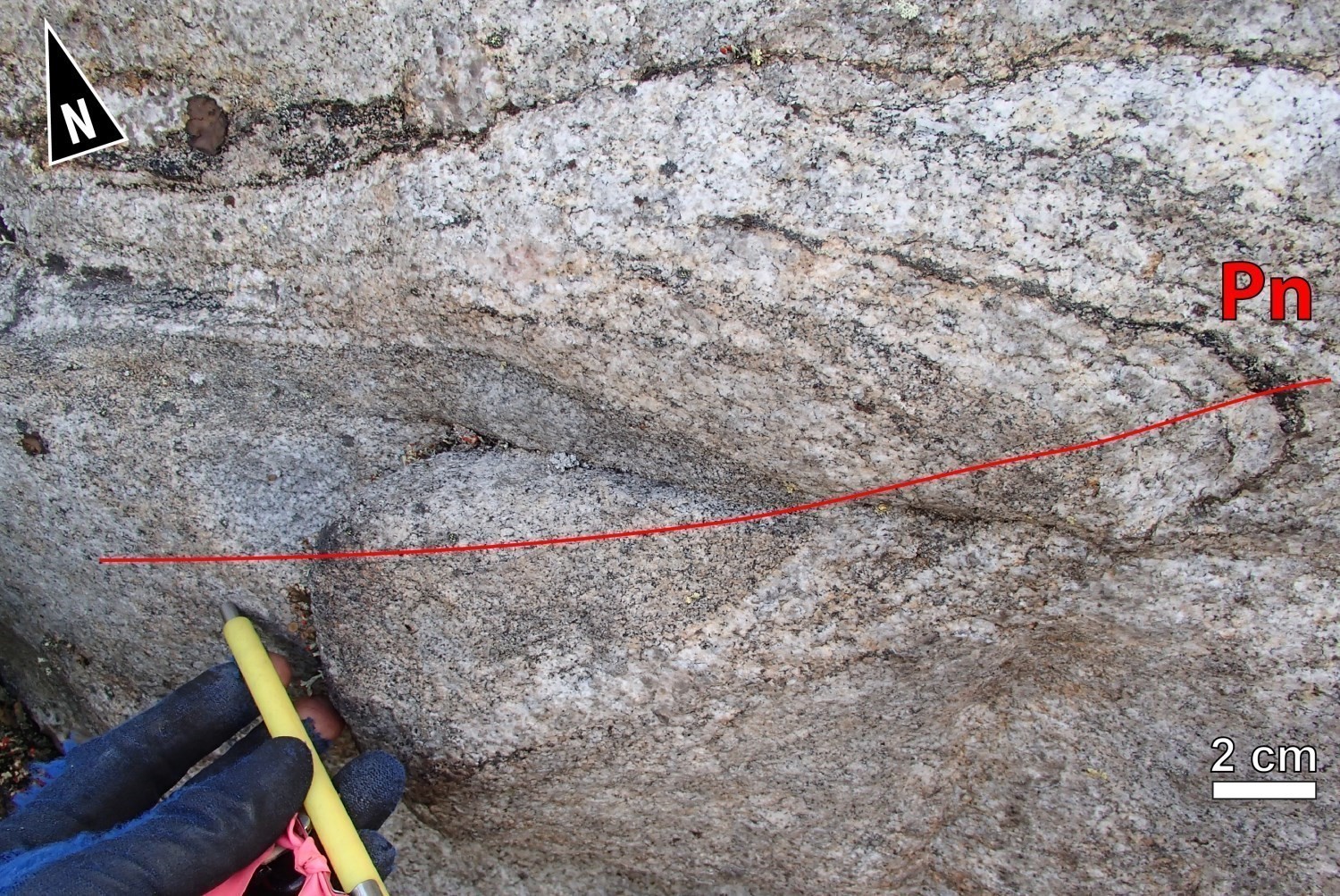 The Misasque Complex is very heterogeneous. It consists of a banded sequence of tonalite, quartz diorite and diorite injected by several generations of granite. A few Pn folds can be recognized on outcrops through magmatic flow textures.

Although Sn foliation measurements tend to demonstrate that the Digne Pluton is also folded, no fold structure was observed on outcrops. 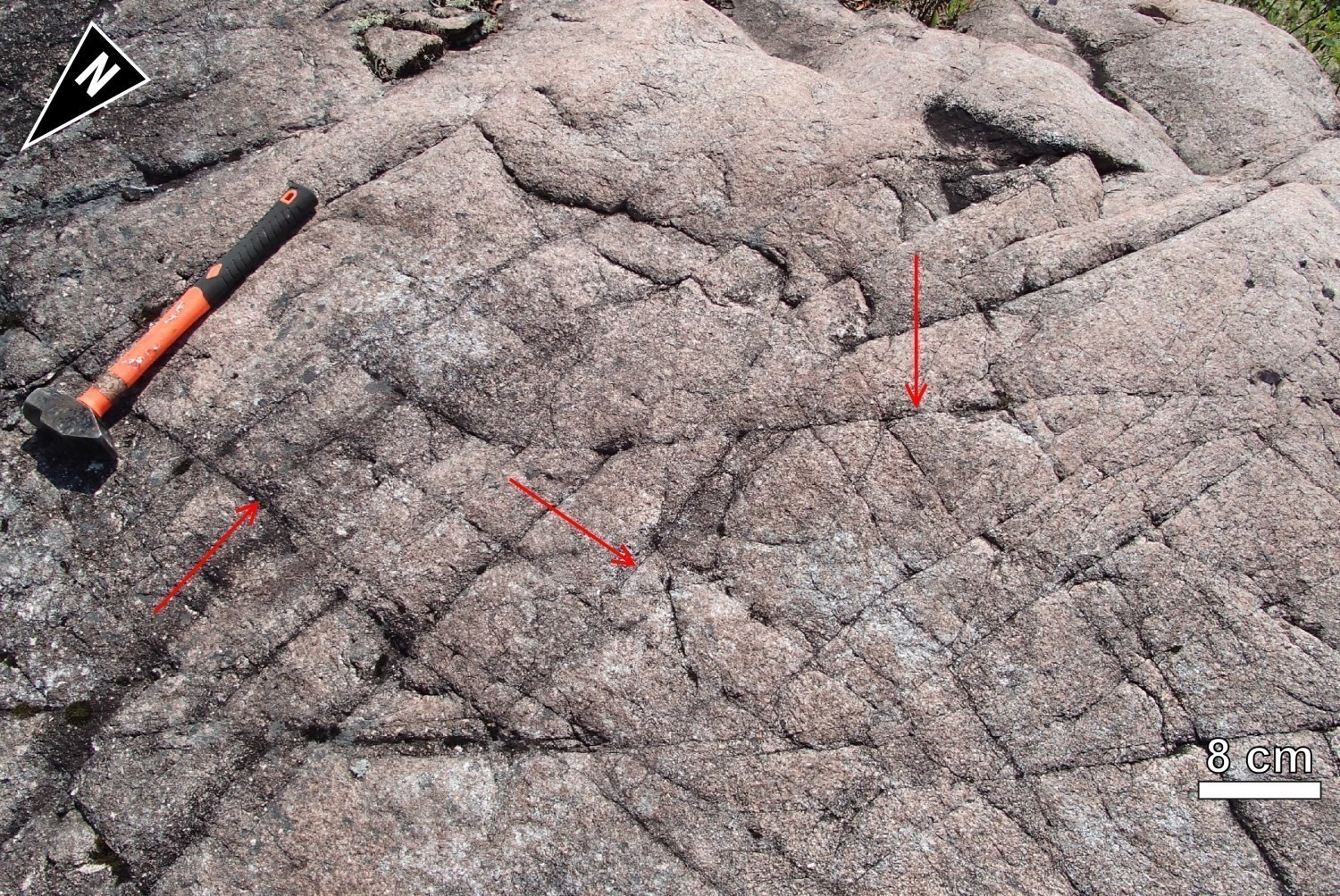 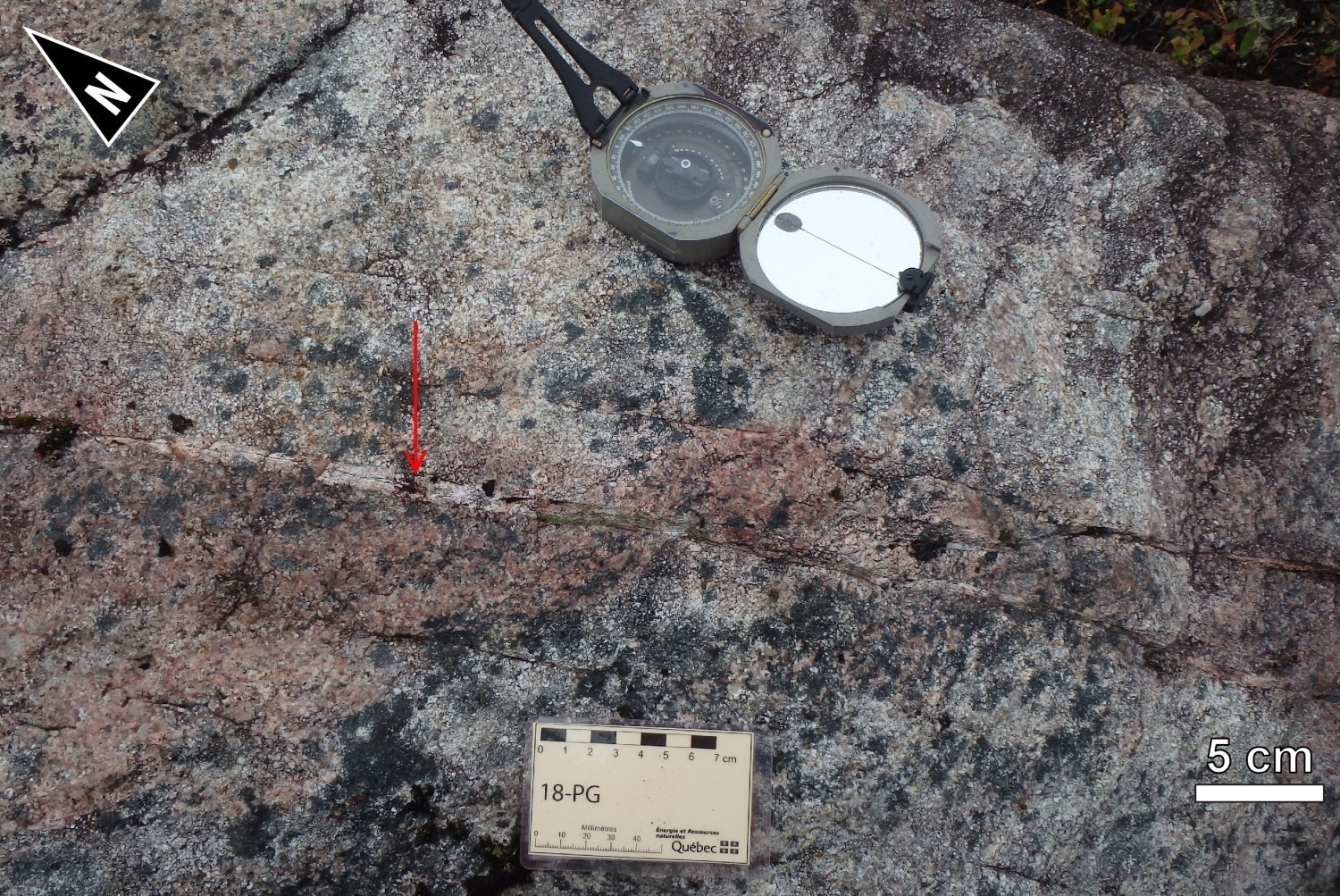 The Cadieux Structural Domain is cut by late faults that were inferred from the analysis of magnetic field maps. These families of faults, with apparent dextral and sinistral displacement, locally offset intrusive units of the Opatica Subprovince. Some field evidence indicates that they consist of little altered fault networks <1 m wide. Some fractures cutting the MacLeod Batholith and Misasque Complex are hematitized and/or epidotized.

This structural domain is relatively homogeneous and mainly affected by regional deformation Dn, which consists of NNW-SSE shortening.

The mineralogical composition of intrusive rocks belonging to the Opinaca Subprovince does not allow establishing the metamorphic conditions that these rocks underwent. Since rocks of the adjacent structural domains have reached the amphibolite facies, it is very likely that rocks of the Cadieux Structural Domain also reached these pressure and temperature conditions.

The MacLeod Batholith is characterized by weak to severe alteration that appears to be zoned. Potassic alteration (biotite, magnetite and K-feldspar in variable amounts) is present in the centre of the intrusion. Propylitic alteration (quartz, chlorite and epidote) and silicification are located at the edge of the intrusion. Later hematite-epidote veinlets cut foliation Sn, and remobilize part of the Cu-Mo-Ag-Au-W mineralization hosted in the MacLeod Batholith and in metasedimentary units surrounding the intrusion. 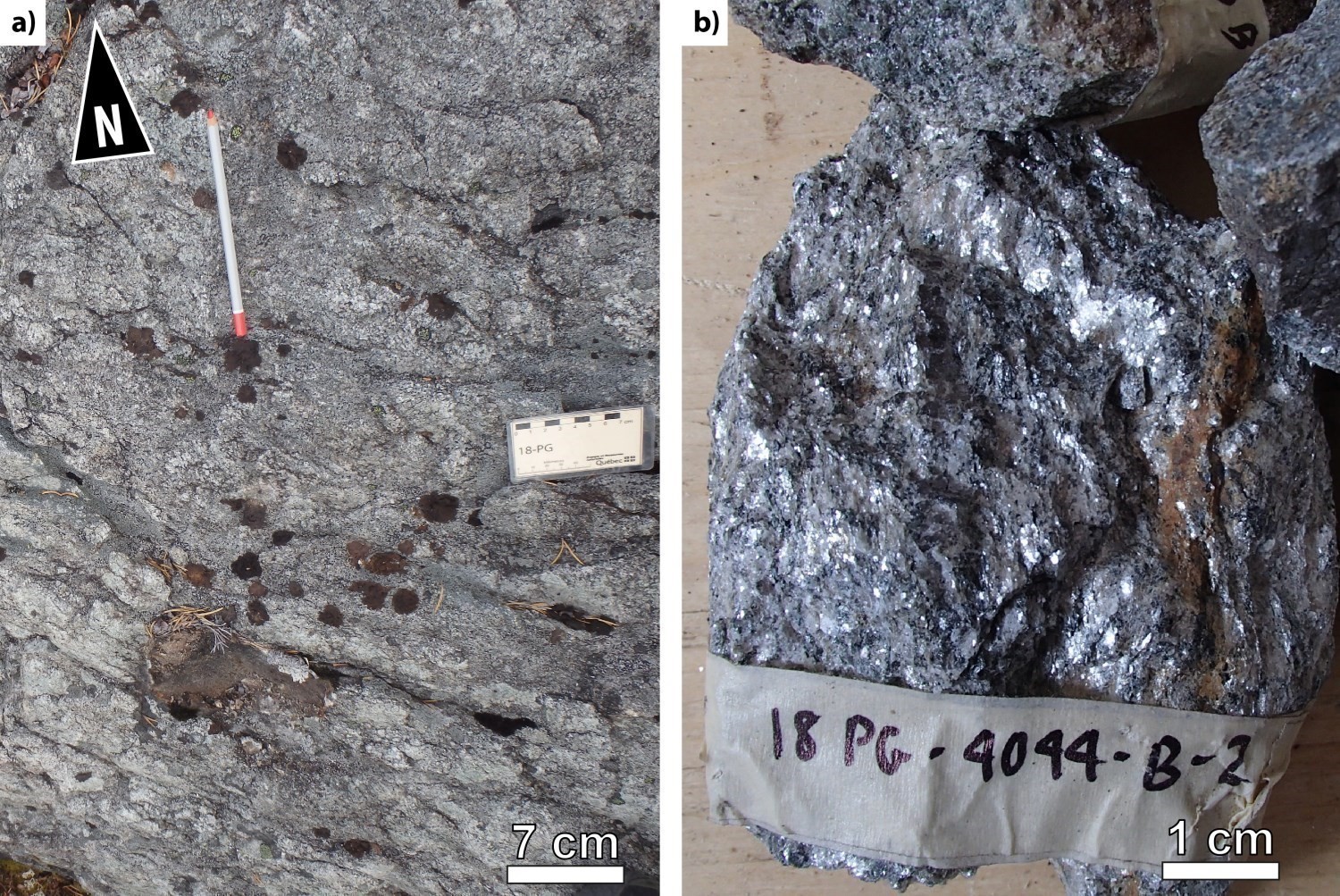 Rocks of the Digne Pluton have undergone muscovitization, which seems to be of hydrothermal origin and which transforms feldspars into an assemblage dominated by quartz and muscovite. Some outcrops expose anastomosing networks of muscovite veins and quartz veins (outcrops 18-PG-4044, 18-PG-4045 and 18-PG-4046).

Finally, apart from hematitization and epidotization of certain outcrops, the Misasque Complex does not seem to be particularly altered.

SIGÉOM total magnetic field and magnetic gradient maps reveal that this domain is heterogeneous.On the total magnetic field map, the Misasque Complex and MacLeod Batholith are characterized by high magnetic susceptibility. A banded texture defines the domain for rocks of the Misasque Complex while the MacLeod Batholith has a smooth and homogeneous texture.  The Digne Pluton is very homogeneous and has low magnetic susceptibility. On the vertical gradient map, the MacLeod Batholith is distinguished by a signature with stronger texture and contrast. Magnetic lineaments, some of which are similar to the trace of regional foliation Sn, are predominantly straight. Some lineaments are undulating, indicating the presence of possible folds. Families of brittle fractures are very apparent on magnetic maps.