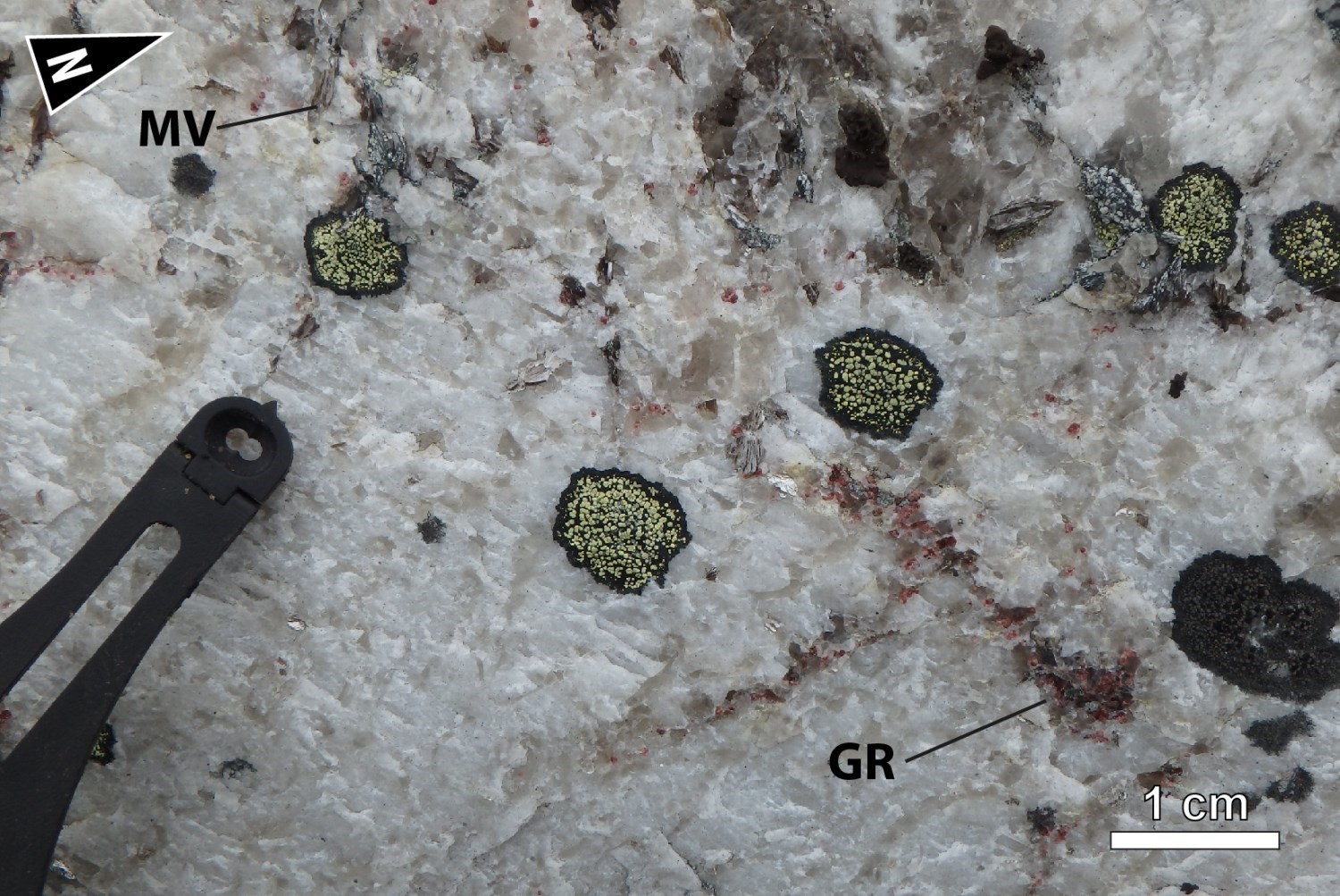 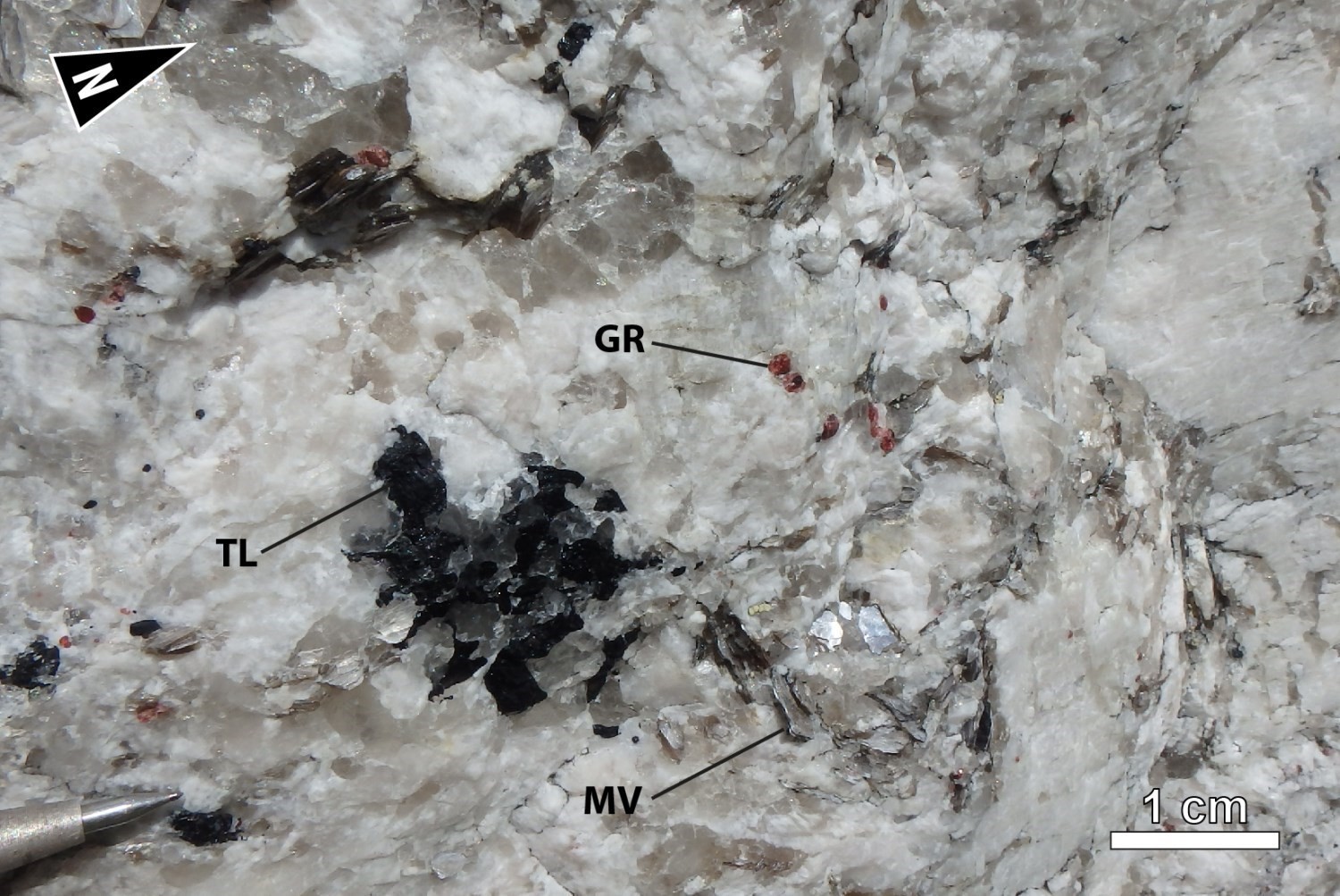 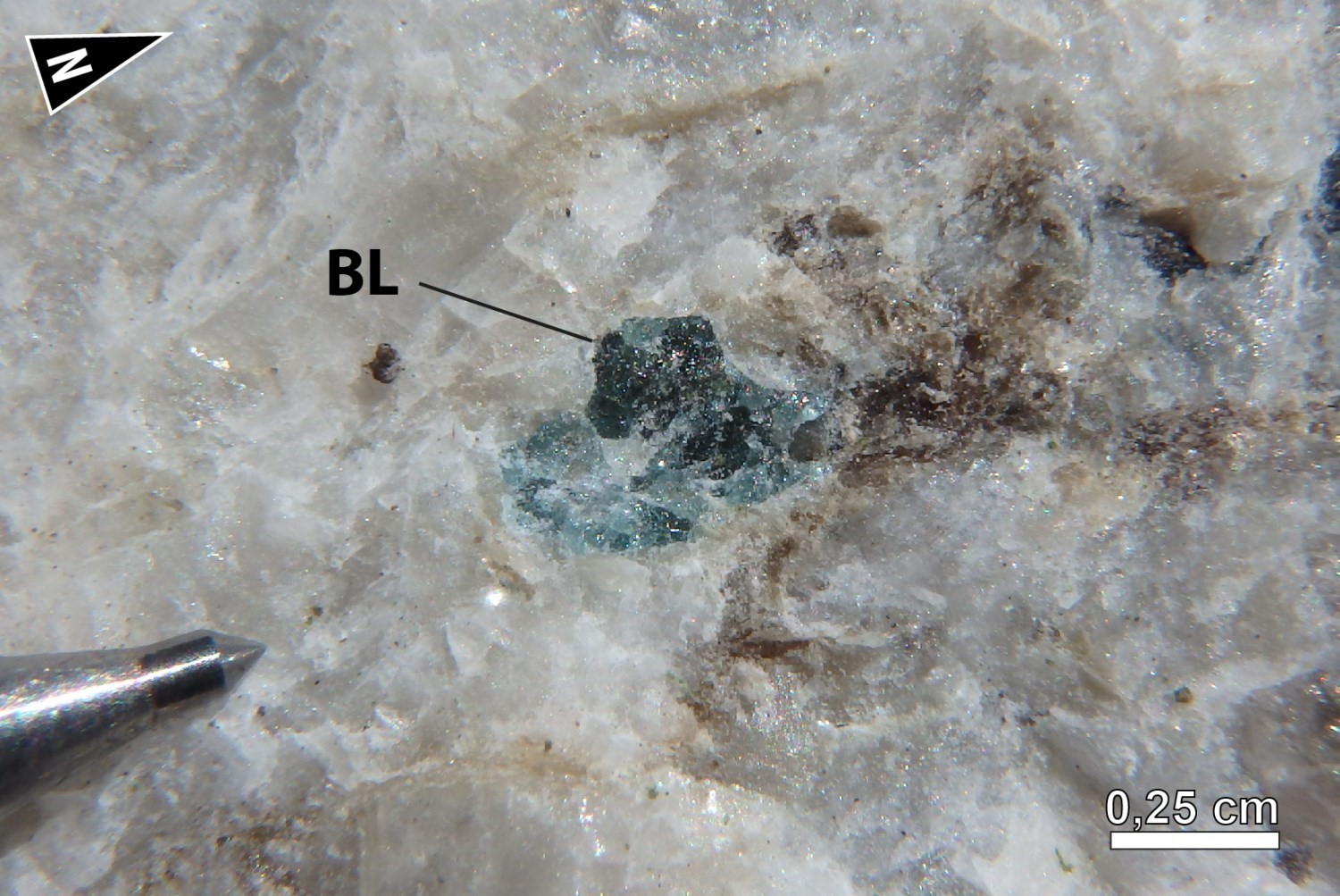 The Wahemen Suite is massive, homogeneous, heterometric and non-magnetic. This unit has very low magnetic susceptibility on the residual total magnetic field map. It is leucocratic and very poor in ferromagnesian minerals (3%). Grain contacts are gradual and diffuse, ranging from medium to coarse-grained to pegmatitic. The Wahemen Suite contains quartz, plagioclase, K-feldspar, muscovite, moderately chloritized biotite and traces of garnet, tourmaline, chlorite, beryl and apatite. Centimeter clusters of spodumene (20 to 30%) are also present at the outcrop 18-SG-7072. Garnet is microgranular and rounded (1-5 mm). It is either evenly distributed within the granite or aligned and preferentially associated with mica. Banding is magmatic in origin and results in alternating centimetric to decametric medium-grained horizons occurring as bands rich in garnet (1-3%), muscovite and tourmaline (<3%). In many places, granite has well-developed graphic textures that show the simultaneous crystallization of quartz and alkaline feldspar. Micrographic, perthitic and poecilitic microcline textures containing muscovite were observed in thin section. Pegmatic horizons are decametre to metre thick and contain rosette clusters and rods of muscovite and biotite. 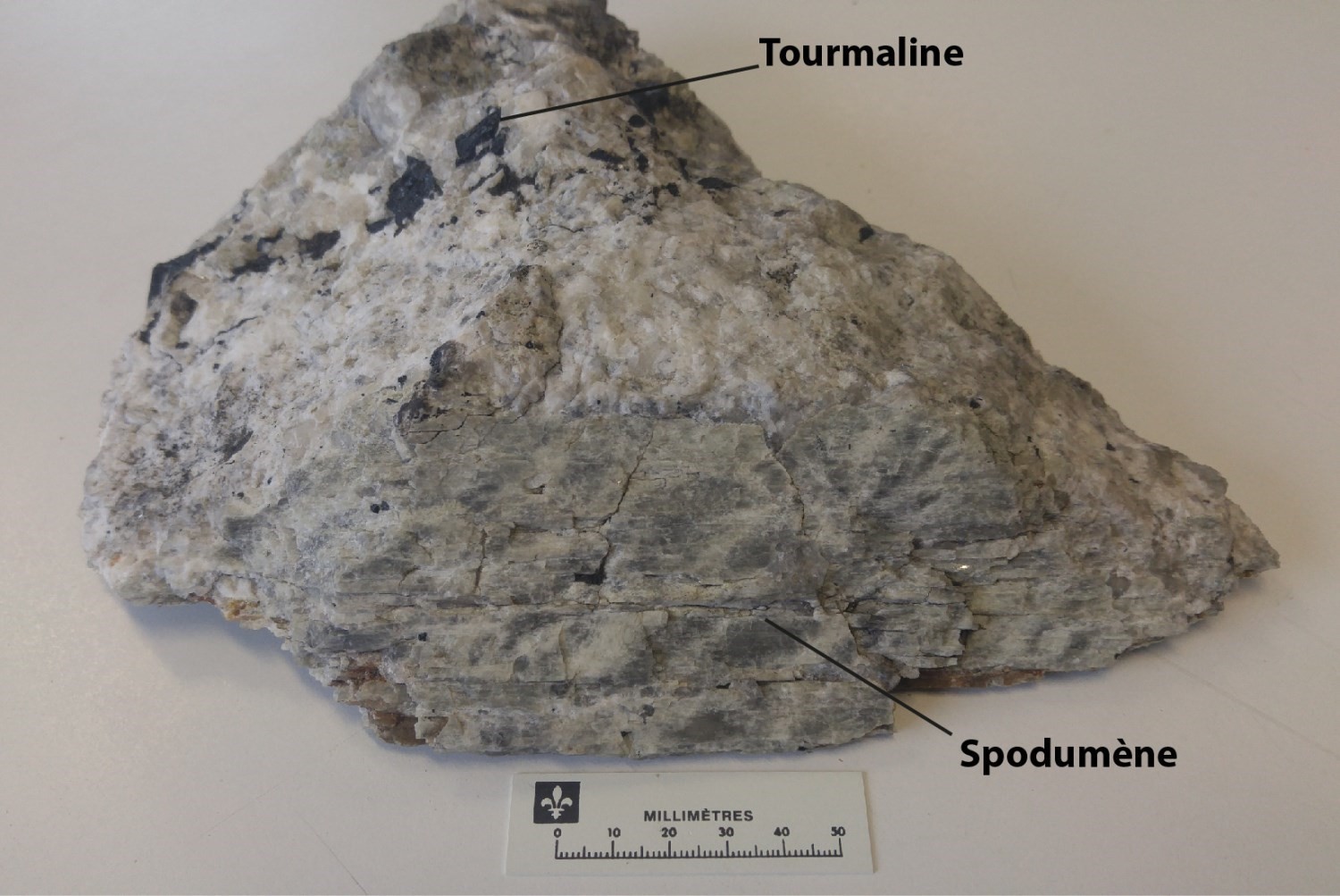 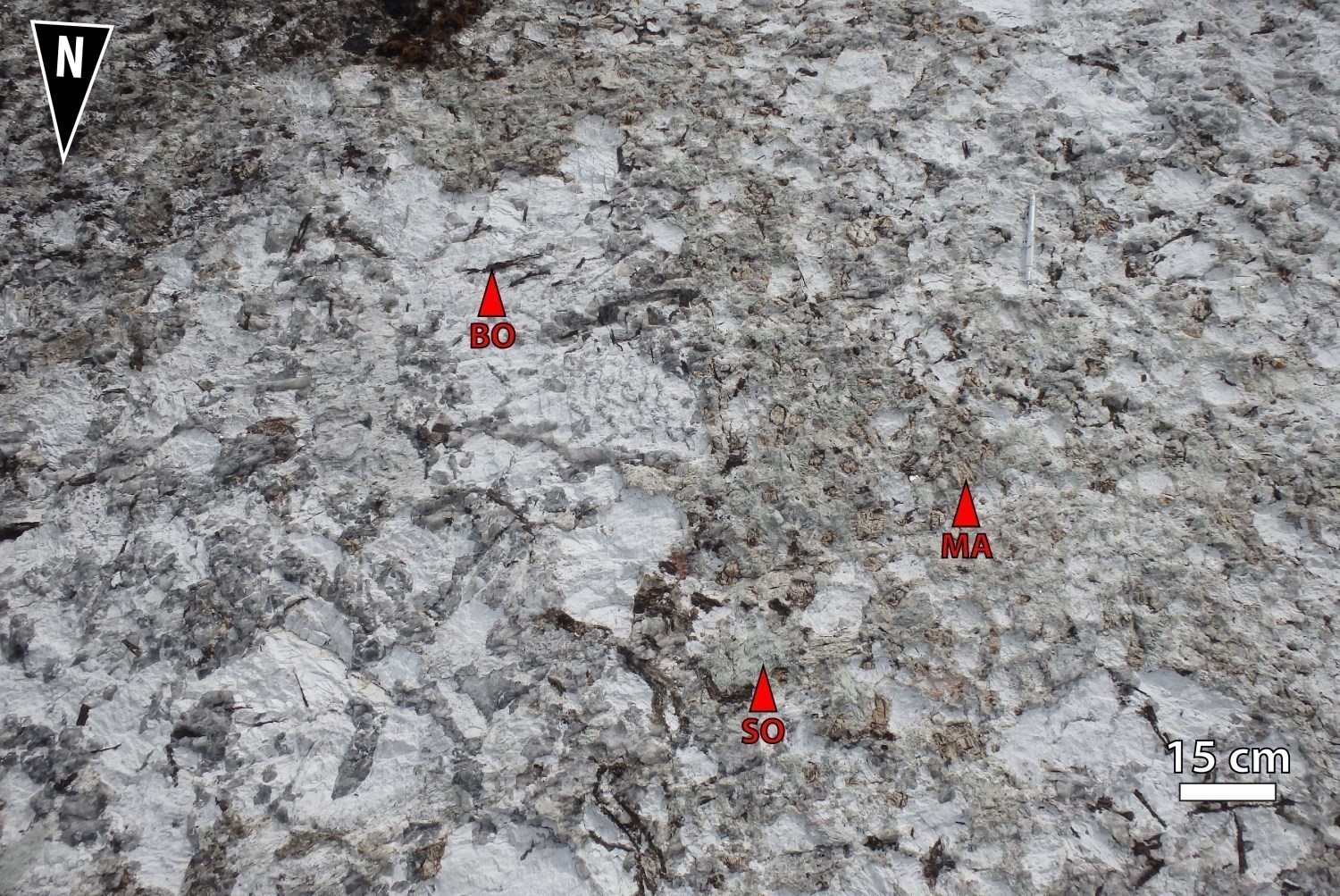 The Wahemen Suite is a target lithology for Li, Be and Ta mineralization (Éch. S894341 mineralized zone). In Quebec, the main lithium mineralization occurences are concentrated in Abitibi and in the Eeyou Istchee James Bay region; these mineralizes zones correspond to granitic pegmatites cutting Archean host rocks. In most cases, these are peraluminous granitoids (S-type), as is the Wahemen Suite.

The Wahemen Suite can be found in sheets 23D11, 23D12, 33A07 and 33A08. In the Léran Lake area, the suite is located north of the Upper Eastmain Greenstone Belt (UEGB). It forms an intrusive mass measuring 65 km by 5 km. In the Bohier Island and Cadieux Lake areas, the Wahemen Suite occurs as small metric bodies that cut Mesoarchean to Neoarchean rocks of the Opatica Subprovince.﻿ These intrusions are spatially associated with the borders of geological subprovinces in the Eeyou Istchee James Bay region where they generally mask contact between these subprovinces.

The Wahemen Suite is one of the youngest Archean units in the Eeyou Istchee James Bay region. The U-Pb age on monazite obtained from a sample taken from sheet 23D12 (outcrop 16-ML-5175) indicates a crystallization age of 2640 ±10 Ma (Davis and Sutcliffe, 2018).

Except for diabase dykes, the Wahemen Suite is the youngest unit of the area. It cuts the regional deformation as well as all rocks with which it is in contact with (the Digne Pluton, René Group volcanic rocks, Bohier Group sedimentary rocks and the Laguiche Complex). Near contact with the UEGB, granite of the Wahemen Suite may contain up to 30% of sedimentary rock xenoliths (wacke, wacke paragneiss, metatexite and metaconglomerate) that are similar to rocks of the Bohier Group and Laguiche Complex.