The Upper Eastmain Greenstone Belt (UEGB) was first mapped by the Geological Survey of Canada during geological survey work that covered a significant area of the Eeyou Istchee James Bay region. At that time, Eade (1966) identified a main klippe of green rocks north of the Otish Mountains, but was unable to define its extensions. The UEGB was better delineated by the work of Hocq (1985), Roy (1985, 1988), Couture (1986, 1987a, 1987b, 1987c, 1993) and Couture and Guha (1990). Couture (1986) was the first to divide rocks of the UEGB into two lithostratigraphic packages, the Bohier Group consisting mainly of metasedimentary rocks, and the René Group, which comprises mostly metavolcanic rocks. Beauchamp et al. (2018) added a new subdivision to the Bohier Group that includes paragneiss and biotite wacke (nAbh1), a unit that was observed in the east branch of the UEGB. They also ordered units and labels of the Bohier Group to comply with the newly established stratigraphic order. The tuff sequence (nAbh3) was also added to the group as a result of the Ministère’s work in the Cadieux Lake area (Beauchamp, 2020).

The Bohier Group refers to metasedimentary rocks belonging to the UEGB located in the northeast part of the Opatica Subprovince. These rocks are metamorphosed to the amphibolites facies (Couture 1987a; Roy 1988; Talla Takam et al., in preparation). Compared to metasedimentary rocks of the Laguiche Complex (Opinaca Subprovince), those of the Bohier Group were not or very little affected by partial melting. The Bohier Group consists of four (4) informal units: paragneiss and biotite wacke (nAbh1), nodular aluminosilicate paraschist (nAbh1a), conglomerate (nAbh2) and tuff (nAbh3).

According to geochemical data, precursors of Bohier Group rocks are mainly wackes (Herron, 1988). Their composition ranges from 60 to 70% SiO2, 12 to 17% Al2O3, 5 to 12% Fe2O3T, 1 to 6% MgO, 0.05 to 2.5% MnO, 1 to 5% CaO, 0.5 to 4% Na2O, 1 to 4% K2O and 0.3 to 1.5% TiO2. Rare earth diagrams normalized to CI chondrite are fractionated and characterized by light rare earth enrichment relative to heavy rare earths. Subunit nAbh1a, which locally contains up to 25% garnet, is more enriched in heavy rare earth elements (La/YbCN = 7.6 and Gd/YbCN = 1.6) than unit nAbh2 (La/YbCN= 13.2, Gd/YbCN = 2.1), which contains 2% garnet. Subunit nAbh1a is also distinguished by a negative Eu anomaly stronger than in unit nAbh1. The Th/Sc vs. Zr/Sc diagram (McLennan et al., 1993) shows that Bohier Group sedimentary rocks were not affected by processes of recycling and concentration of heavy minerals. The tectonic environment diagram (Bhatia and Crook, 1986) indicates that Bohier Group rocks would have developed in a context similar to current continental arcs. 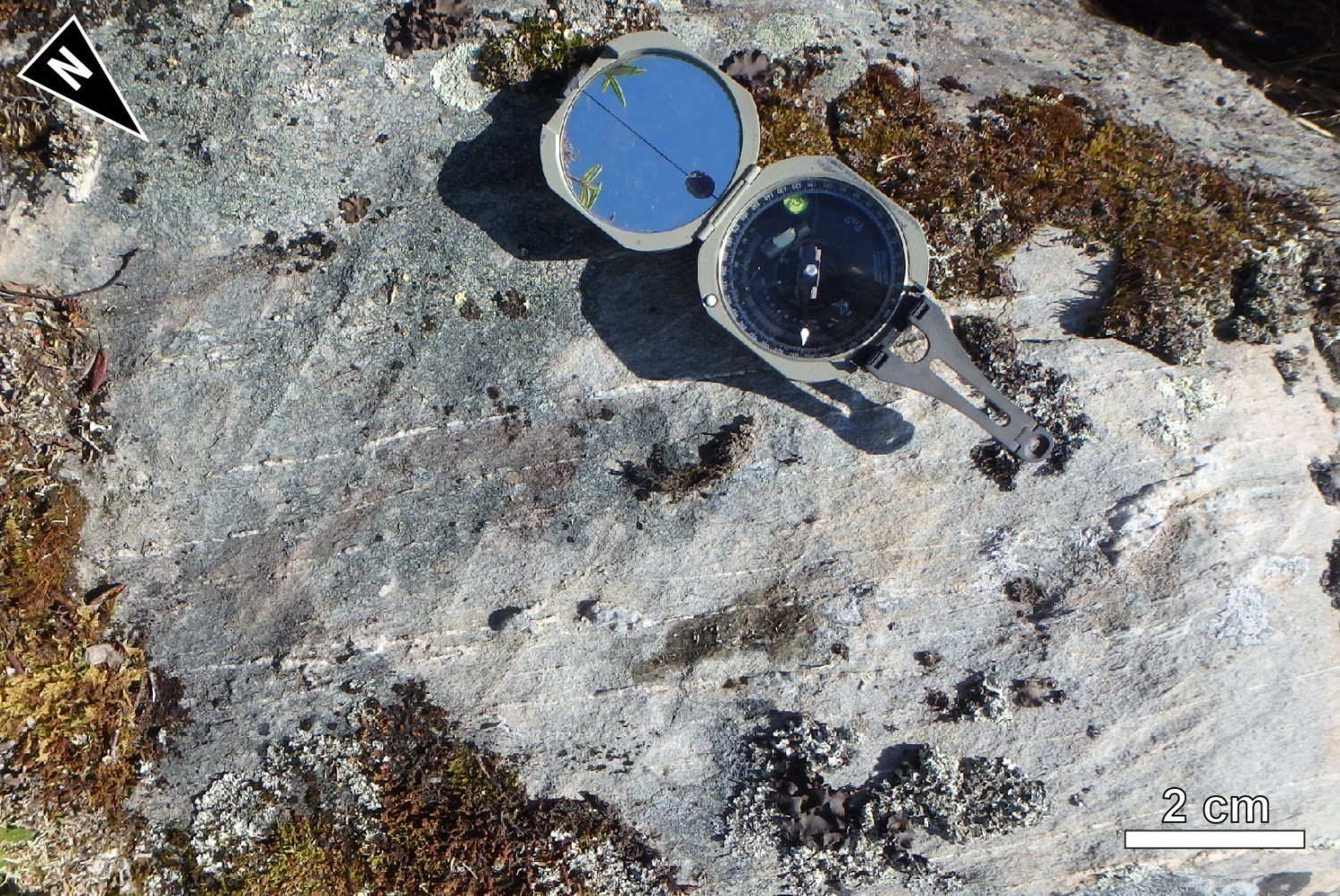 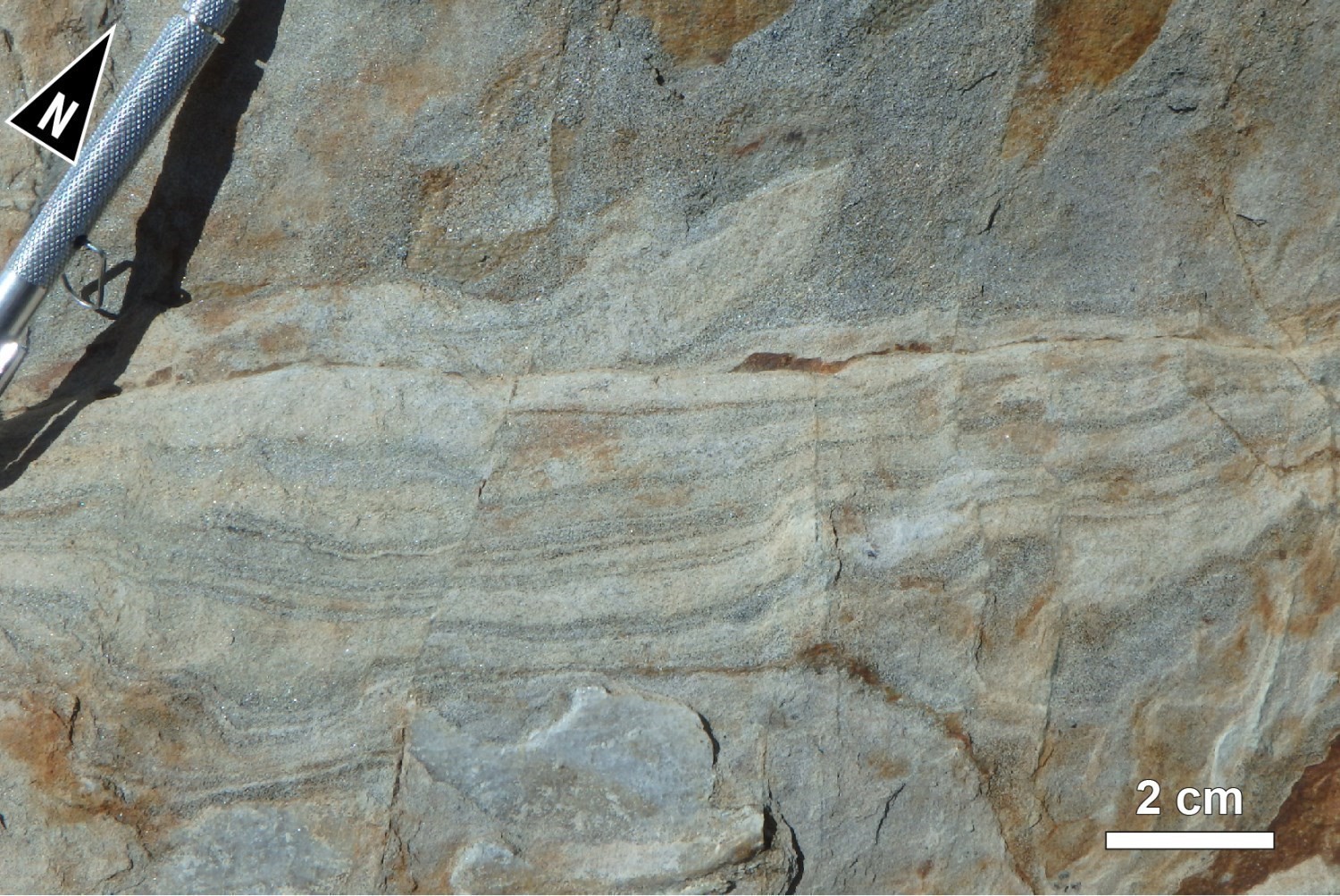 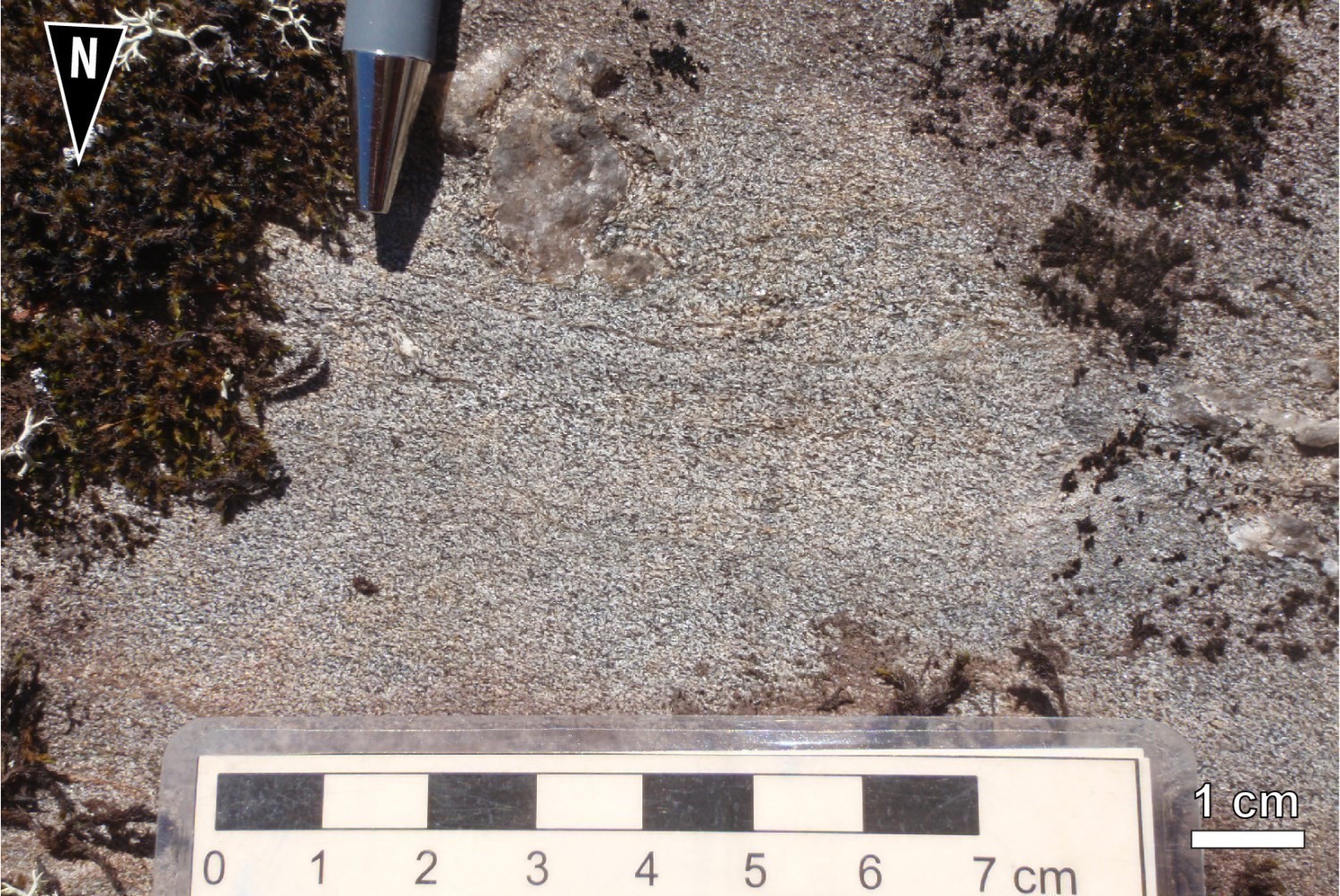 Unit nAbh1 consists of a granoblastic wacke paragneiss and a stratified wacke containing 20 to 30% biotite. Primary bedding is locally visible and marked by darker silt beds alternating with﻿ lighter sand beds. Sedimentary bedforms, such as sorting, are preserved on the least recrystallized outcrops. Quartz and plagioclase grains are intergrown and neoblastic. Foliation is poorly developed and characterized by the preferential orientation of biotite flakes. The typical assemblage is composed of quartz, variably twinned plagioclase, biotite, K-feldspar and traces of chlorite, epidote, apatite and zircon. These nonmagnetic sedimentary rocks are cut by 2 to 10% millimetric to centimetric white quartz ± calcite veins. A massive, white to pinkish, coarse-grained pegmatic granite containing 5% muscovite and biotite cuts metasedimentary rocks. 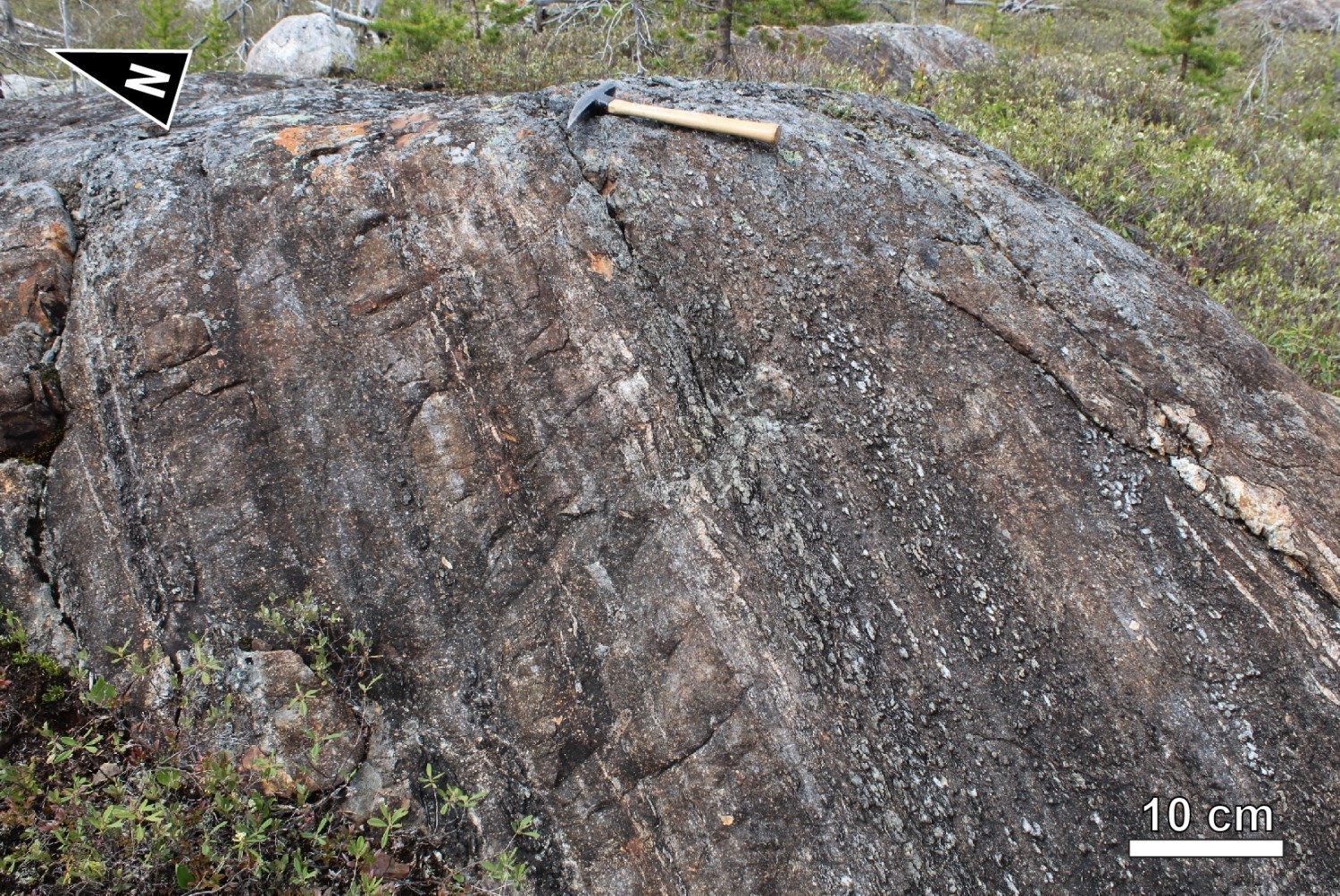 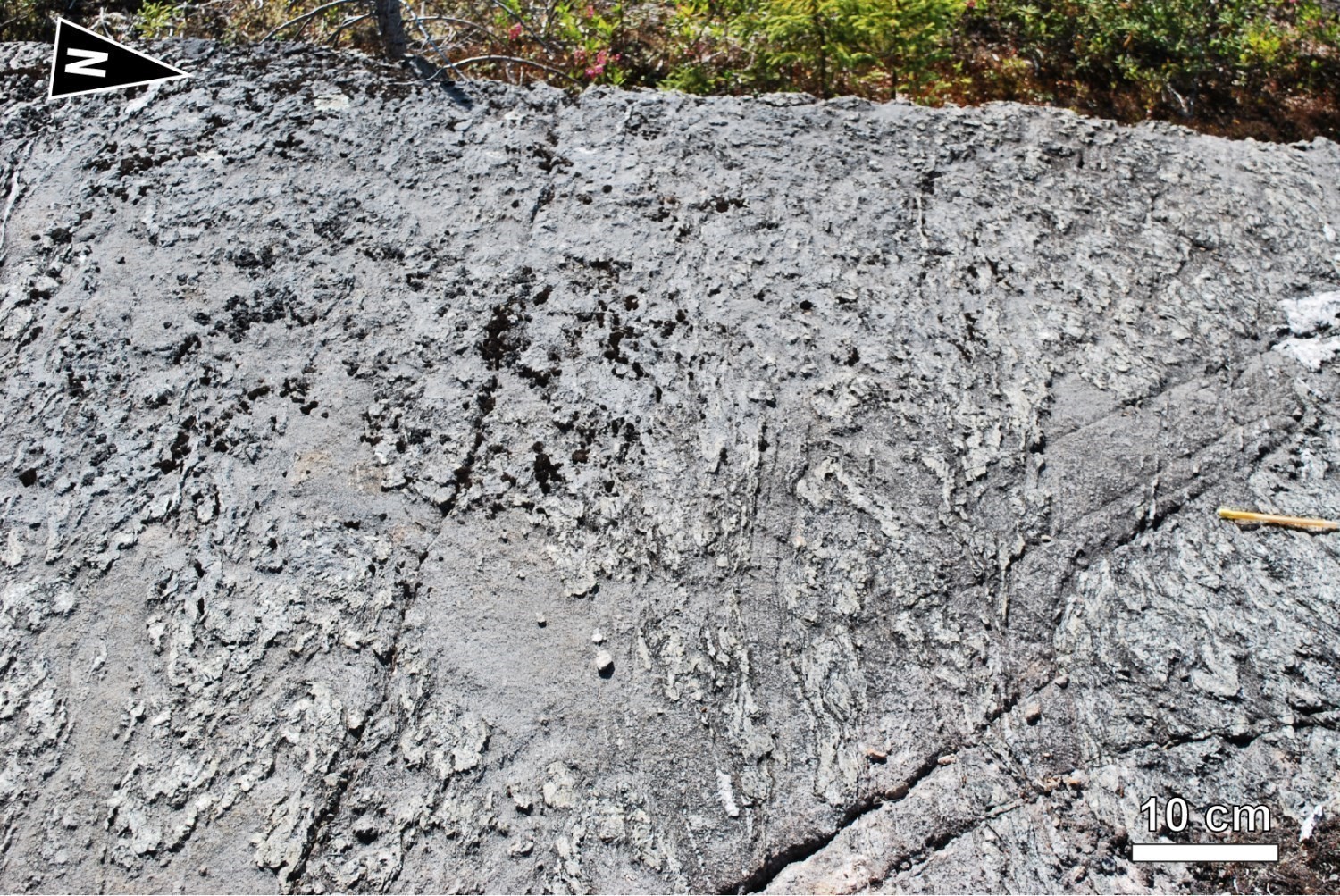 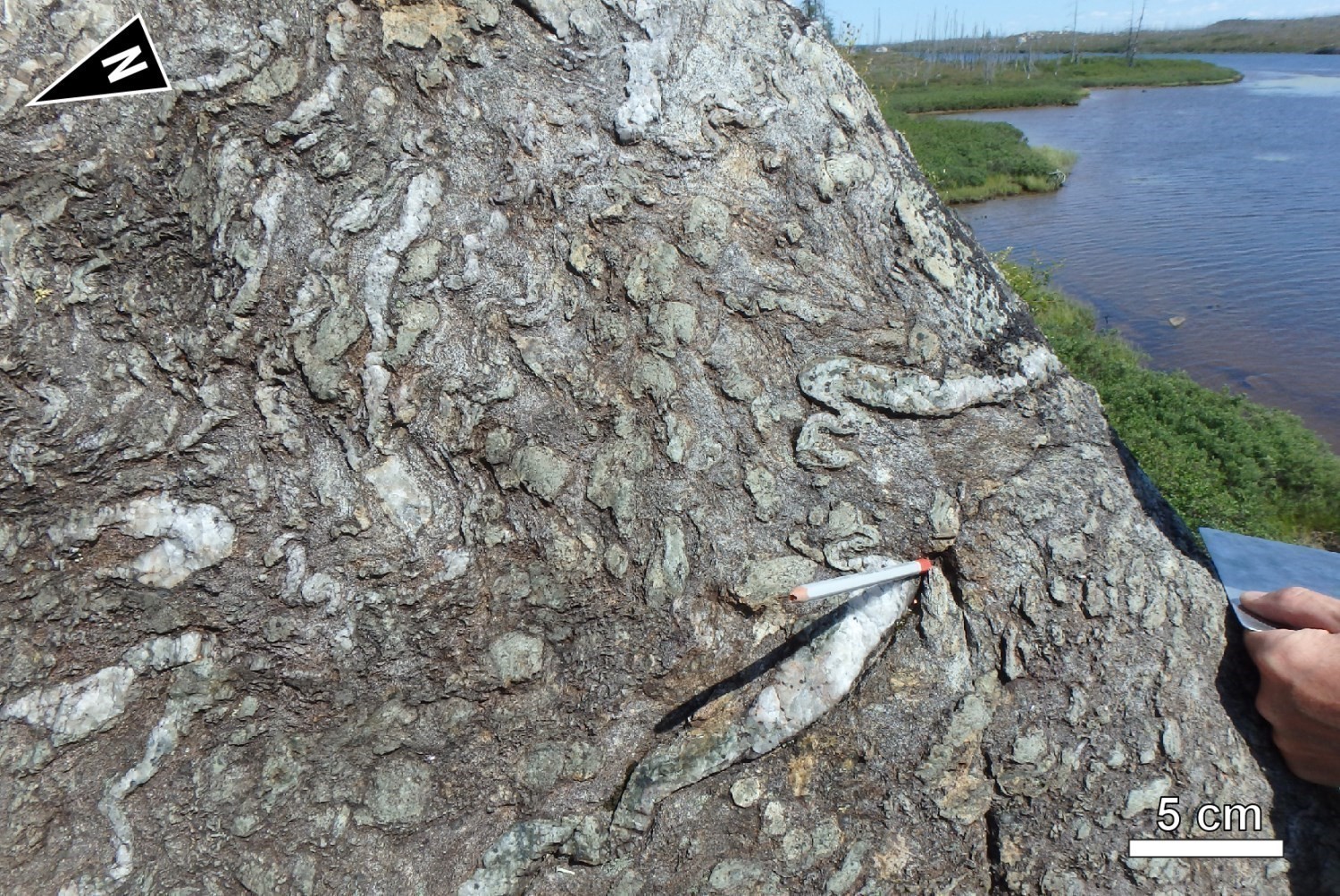 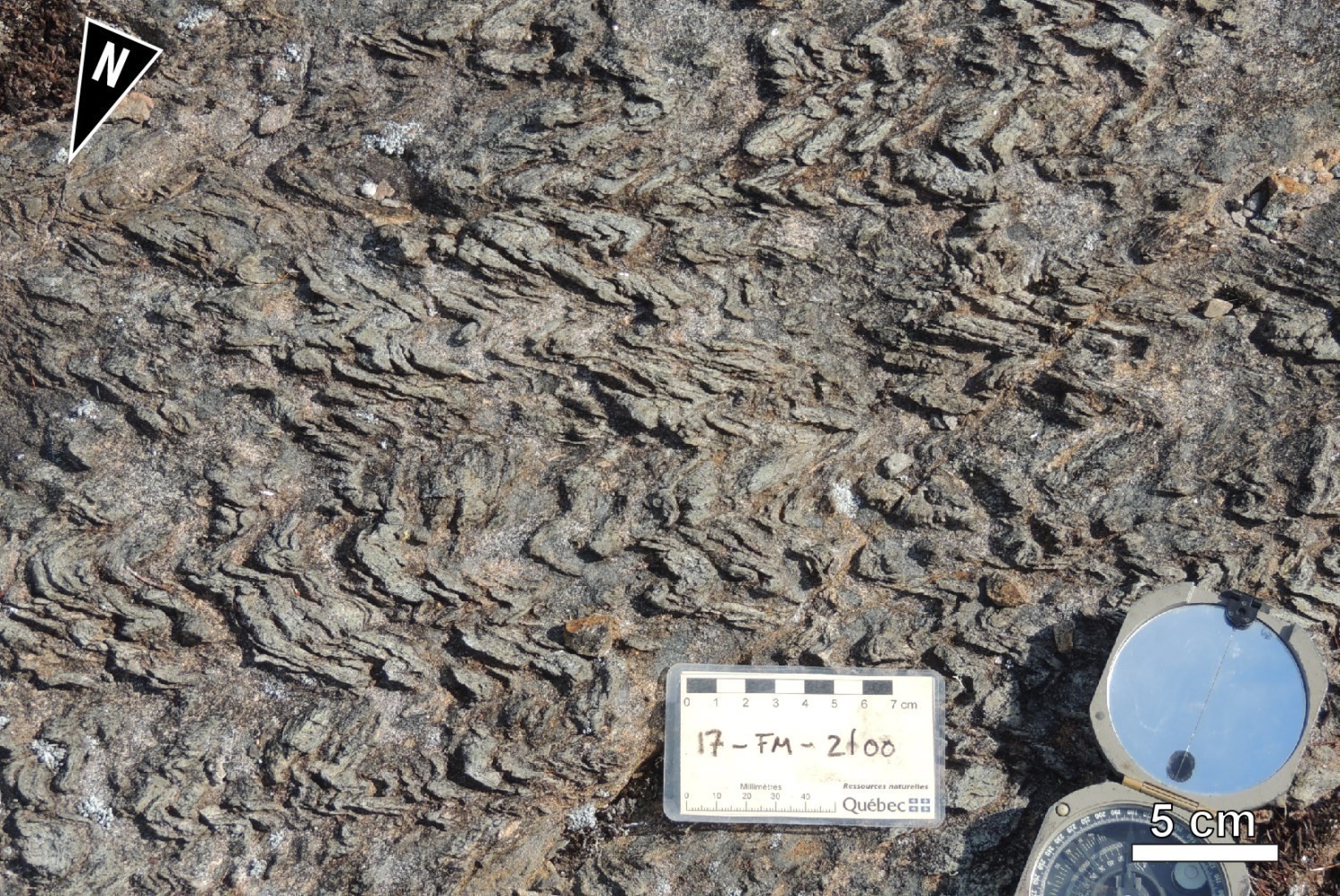 Subunit nAbh1a consists of a package of aluminous metasedimentary rocks of pelitic origin. In the Couture report (1987a), this unit was described as fine-grained aluminous metasedimentary rocks.﻿ The paraschist is composed of a biotite-muscovite-quartz-plagioclase-sillimanite (or fibrolite)-garnet-cordierite assemblage. Traces of staurotide, tourmaline, amphibole, chlorite, epidote, apatite, zircon, sphene, rutile and opaque minerals were observed in thin section. These rocks underwent metamorphism at the upper amphibolites facies. Primary bedding is well preserved within this metasedimentary unit; it is recognizable by variations in metamorphic assemblages. Clay beds, which are more aluminous, are lined with aluminosilicates, mainly sillimanite. Sand beds contain fewer aluminosilicates and exhibit garnet. Aluminosilicate paraschist outcrops are heavily deformed and affected by tight isoclinal folding.

In thin section, samples show the presence of at least two schistosities and the angular relationship between primary bedding and the main regional fabric. Sillimanite porphyroblasts are very common in paraschists. They form nodules or whitish fibres in positive relief on the surface of outcrops. Sillimanite nodules are millimetric, usually centimetric (0.5-5 cm). They appear to replace andalusite pseudomorphs and are partially retrograded to muscovite. Some outcrops in the centre of Bohier Island show an abundance of sillimanite, which can account for up to 50% of the rock. This abundance of aluminosilicates suggests that the unit has undergone aluminous alteration and/or significant leaching of alkaline elements. Garnet, millimetric to centimetric, is euhedral and poikiloblastic. It contains several inclusions of quartz, biotite and muscovite. An angular relationship between the orientation of garnet inclusions and the trace of primary foliation is observed in some thin section. Observed garnet is isolated or in clusters. A quartz rim forming a depletion halo is present around the garnet. Locally twinned plagioclase is partially to 100% damouritized. Biotite forms flakes whose preferential orientation highlights the main schistosity. It is often intergrown with muscovite. Two generations of muscovite are present, the first occurs as thin flakes aligned with the main foliation, the second forms large prisms overprinting foliation. Cordierite, when present, forms highly pinitized poikilitic zones. Some paraschist outcrops on Bohier Island are impossible to identify due to extensive penetrative alteration in garnet-quartz ± tourmaline ± amphibole. 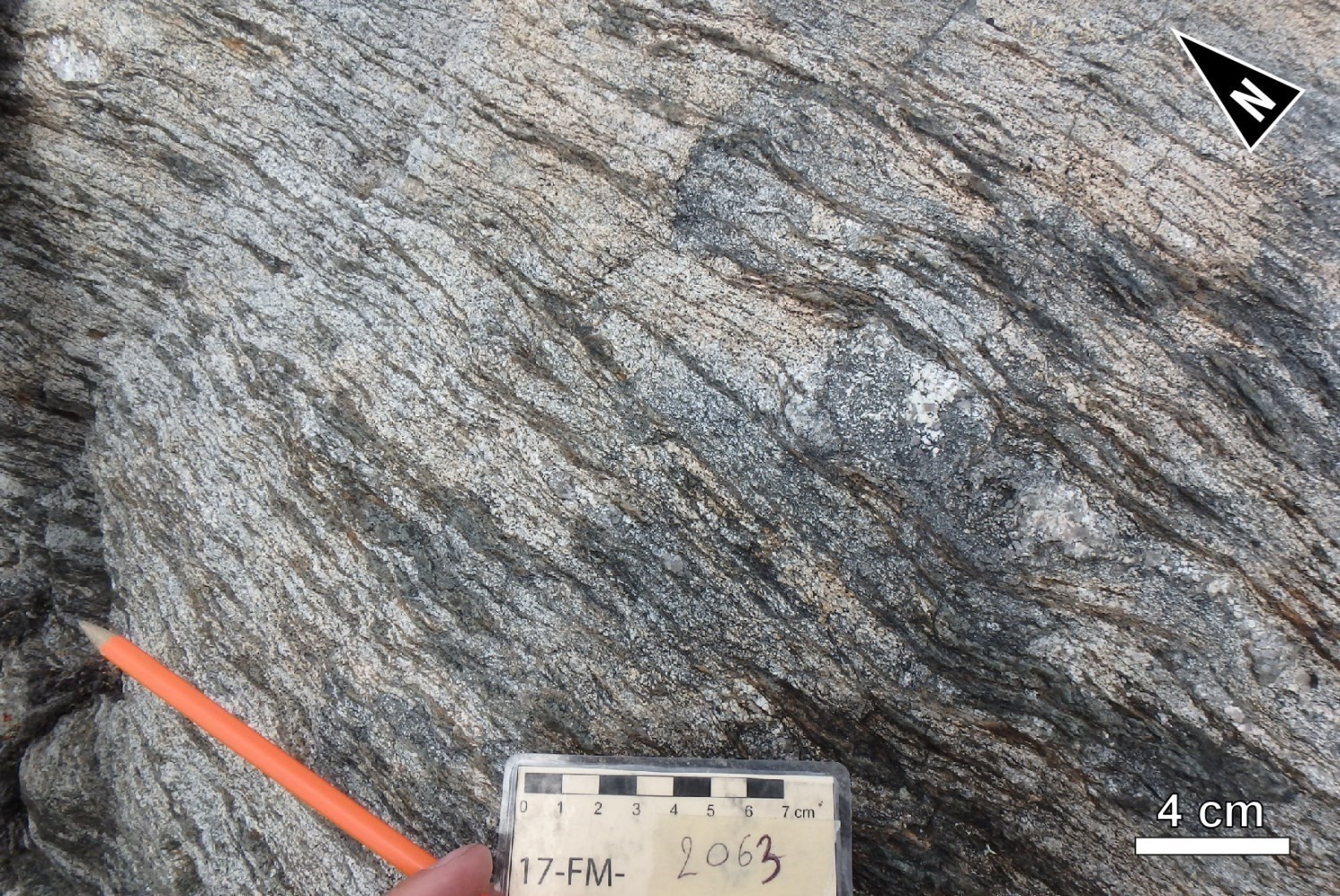 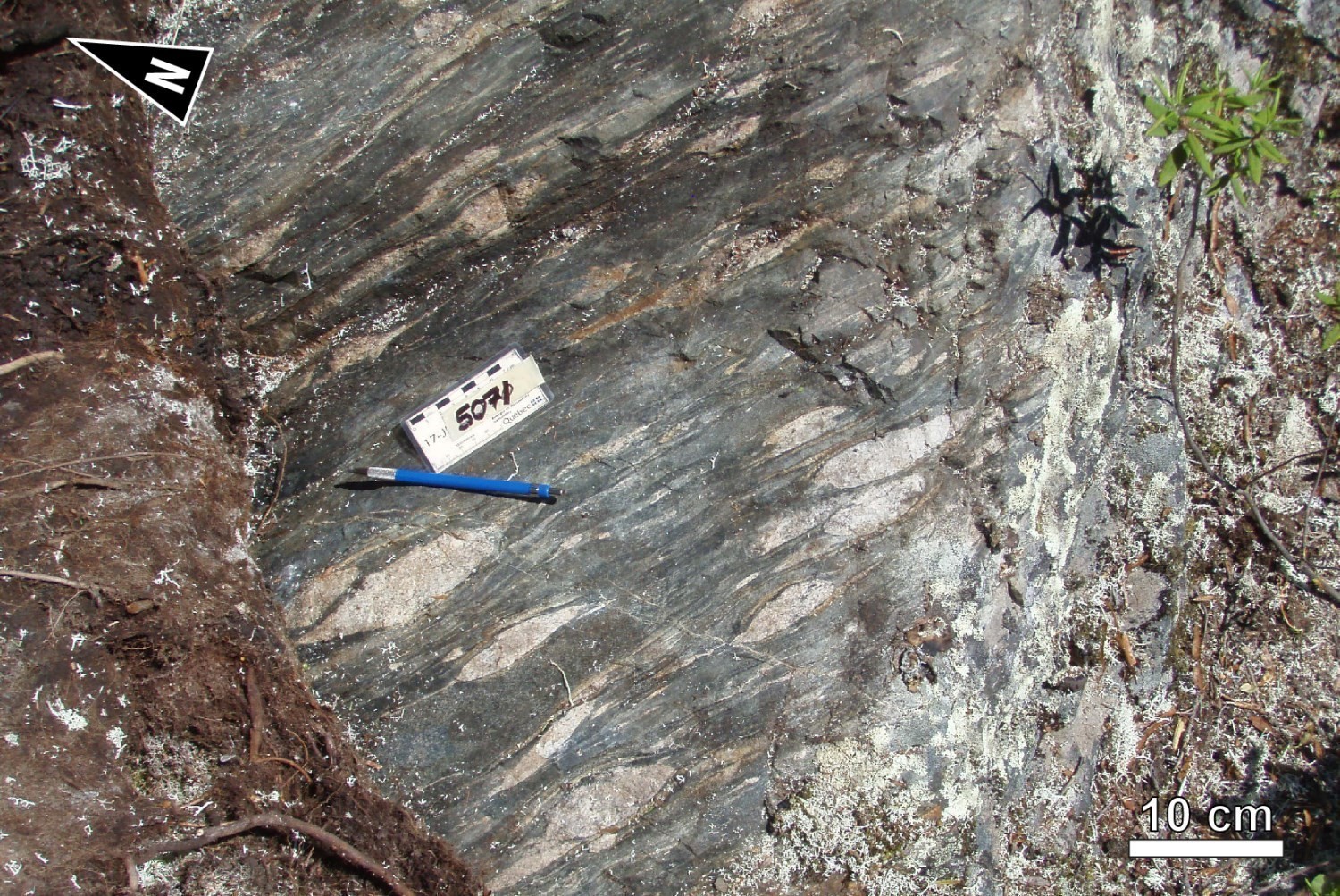 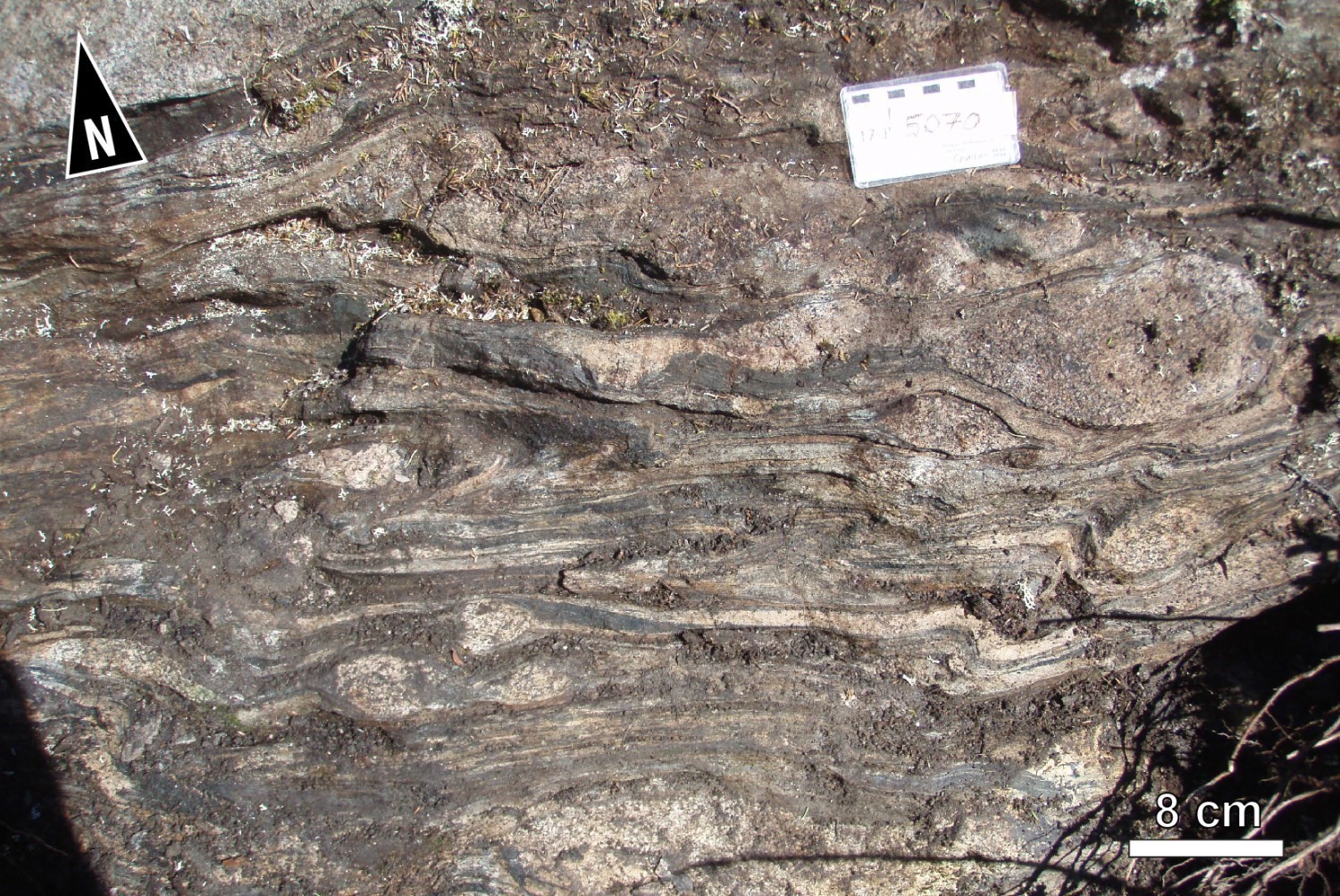 Unit nAbh2 consists of a package dominated by polymictic conglomerates. The percentage of fragments varies from 50 to 85%. The proportion of clasts is locally difficult to assess. Because of recrystallization, fragments with the same composition as the matrix are indistinguishable. The coarse fraction of conglomerate composed of rounded to subrounded blocks and pebbles of granitoids (tonalite, granodiorite, quartz diorite and diorite) and gabbro. Pebbles and cobbles of felsic and intermediate intrusive rocks, metavolcanic rocks (felsic, mafic and ultramafic), tuffs and metasedimentary rocks are also present in the conglomerate. Fragments are millimetric to decametric and their morphology shows that they have been deformed mainly by flattening rather than by constriction. The largest intrusive rock clasts are up to 70 cm wide, indicating a dynamic system of emplacement.

Some highly deformed conglomerate outcrops have a banded appearance caused by strong local flattening of the clasts (outcrop 17-FM-2063).

The composition of the conglomerate matrix varies laterally. Conglomerate in the western branch (Dolent Lake area) is distinguished by its dark green matrix composed of amphibole (50-75%), plagioclase (15-25%), quartz (5%), epidote and traces of sphene, rutile and opaque minerals. 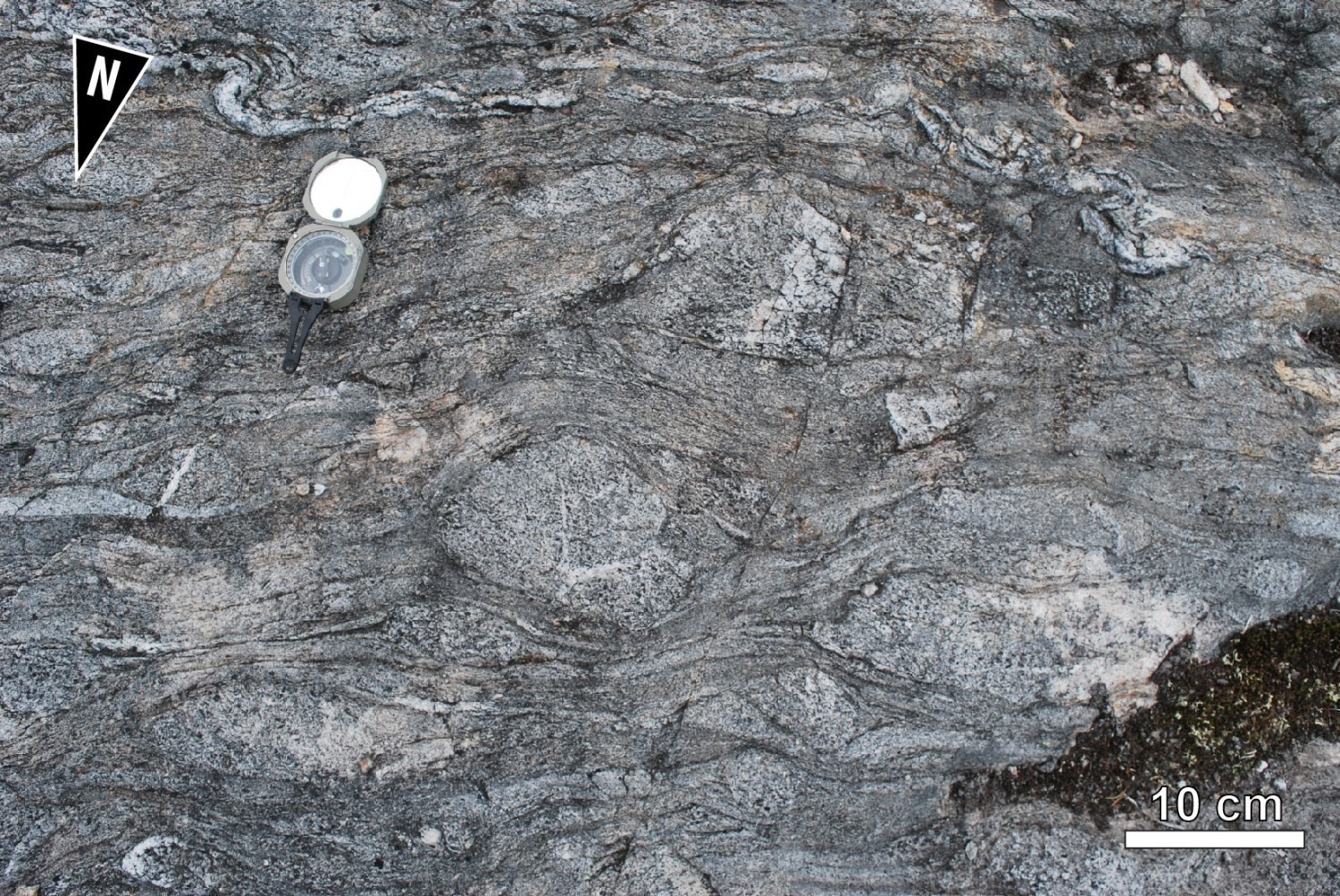 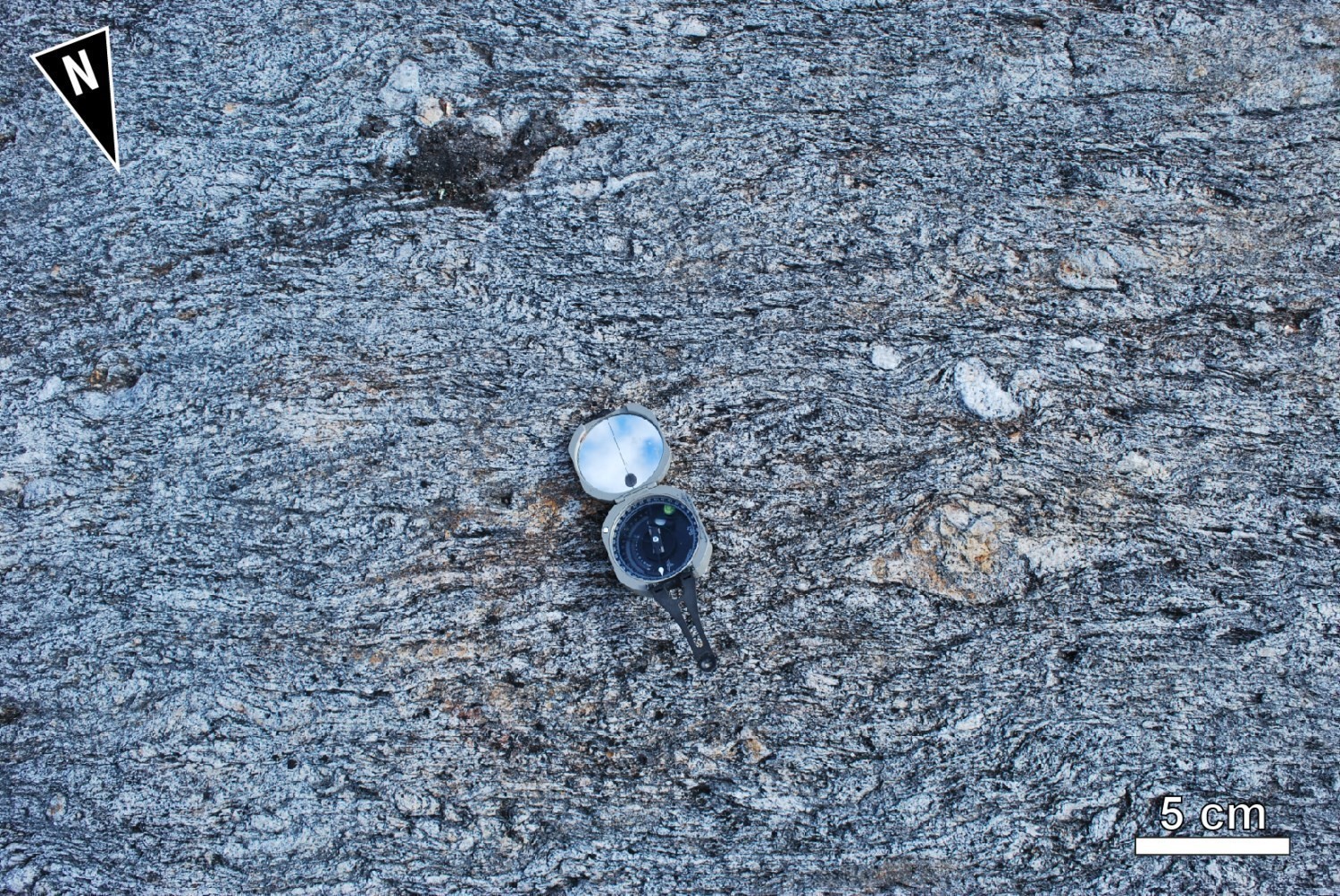 On Bohier Island, two types of conglomerate were observed. The most common is the joint fragment metaconglomerate, supported by felsic clasts. It is in sharp contact with a monomictic conglomerate containing floating fragments (outcrop 17-AB-1071). The latter contains 5 to 10% quartz pebbles, as well as felsic pebbles (metavolcanics and tonalite). The matrix of the paraschist-type monomictic conglomerate is rich in quartz, muscovite, feldspar, biotite and contains minor amounts of sillimanite and millimetric garnet (trace-1%).

The change in matrix composition and clast heterogeneity tend to indicate a gradual erosion of proximal volcanic rocks during sedimentation. The conglomerate with a dark green matrix located in the centre of the west branch of the UEGB (Dolent Lake area) would result from the erosion of the underlying volcanic mafic sequence. The conglomerate of Bohier Island, with a pale grey matrix and mostly felsic fragments, would come from eroding plutonic rocks and altered felsic edifice nearby. Couture (1987a) had documented the presence of a highly deformed mixed tuff and basalt unit north of Lépante Lake, but had not created a mappable unit. Following work in the Cadieux Lake area, Beauchamp (2020) considered it appropriate to introduce unit nAbh3 to represent tuffs. It consists of a sequence of pinkish-beige felsic to intermediate tuffs interstratified in greenish layers interpreted as mafic tuffs. These tuffs millimetric (laminations) to centimetric banding caused by compositional variations. Despite deformation, stratification (S0) is visible but has become parallel to the strong foliation. Small, rounded and very elongated fragments highlight the volcaniclastic origin of the rock (Couture, 1987a).

The Bohier Group belongs to the UEGB, located in the NE part of the Opatica Subprovince. Conglomerate (nAbh2) occupies the central part of the west branch of the UEGB and western Bohier Island. The paragneiss and wacke unit (nAbh1) occupies the central part of the east branch. Units nAbh1 and nAbh2 occupy the axial part of synclines, bordered on both sides by mafic volcanics of the René Group. The aluminosilicate paraschist subunit (nAbh1a) is located in the south branch of the UEGB and in the Bohier Island area. On Bohier Island, there is a gradual transition from unit nAbh2 to subunit nAbh1a going south and east. Conglomerate beds (nAbh2) are interstratified in paraschist beds (nAbh1a) (outcrops 17-JM-6080 and 17-FM-2057). The conglomerate unit (nAbh2) changes laterally to a mixed tuff unit (nAbh3) in the western portion of the west branch of the UEGB.﻿ Metasedimentary rocks of the Bohier Group have a lateral extension of 50 km in a NE-SW direction and a thickness of 0.3 to 3 km.

Two samples of Bohier Group conglomerate (nAbh2) were collected during the summer of 2017 for U-Pb isotopic dating of detrital zircons (Beauchamp et al., 2018). The first sample has a pale grey matrix (outcrop 17-JM-6027), and the second one a dark green matrix (outcrop 17-JF-5071).

The dark green-matrix conglomerate outcrop is located in the west branch of the UEGB, 1.5 km south of Dolent Lake. It shows an amphibole-rich matrix and contains tonalitic felsic clasts, basalt or gabbro mafic clasts, and a minor fraction of intermediate clasts. The majority of ages from zircons of the dark-matrix conglomerate are distributed around two ages: 2712 ±6 Ma and 2836 ±10 Ma (Davis and Sutcliffe, 2018b). This conglomerate would have been formed by the erosion of a Mesoarchean basement and Neoarchean rocks. The youngest zircon population dated 2712 ±6 Ma (Davis and Sutcliffe, 2018b) is the maximum sedimentation age of Bohier Group rocks.

The slight variation in age suggests that the source of the eroded material would be limited over relatively short transport distances.

Metasedimentary rocks of the Bohier Group unconformably overlie René Group metavolcanic units (Beauchamp et al., 2018). This stratigraphic interpretation differs from that proposed by Hocq (1985), Couture (1987) and Roy (1988), who placed Bohier Group sedimentary rocks at the base of the sequence under René Group units. The interpretation is closer to that of Boldy et al. (1984) who proposed placing René Group metavolcanic rocks at the base of the stratigraphic succession. Units nAbh1 and nAbh2 are cut by a coarse-grained to pegmatitic granite containing muscovite and minor amounts of biotite and tourmaline (outcrop 17-AB-1071) similar to the Wahemen Suite. Quartz veins and veinlets, as well as folded and boudinaged granite intrusions, are present in metasedimentary rocks of the Bohier Group. The Cadieux Suite cuts the southern part of the nAbh1 unit in the east and west branches of the UEGB. The Bart Thrust Fault marks a sharp contact between aluminosilicate paraschists of this belt and migmatized biotite (± garnet ± cordierite) wacke paragneiss in the Opinaca Subprovince.