The first representations of the Opatica Subprovince or Opatica Belt appear on maps of the geological provinces and subprovinces of Douglas (1973) and Stockwell (1982). Current boundaries come from the work of Card and Ciesielski (1986). Since then, the limits of Opatica have been clarified thanks in particular to surveys and geological studies carried out by the Ministère and its partners. Opatica was originally interpreted as a metasedimentary subprovince by Card and Ciesielski (1986) and Card (1990), but mapping done by Benn et al. (1992) and Sawyer and Benn (1993) demonstrated that its nature was rather volcano-plutonic. 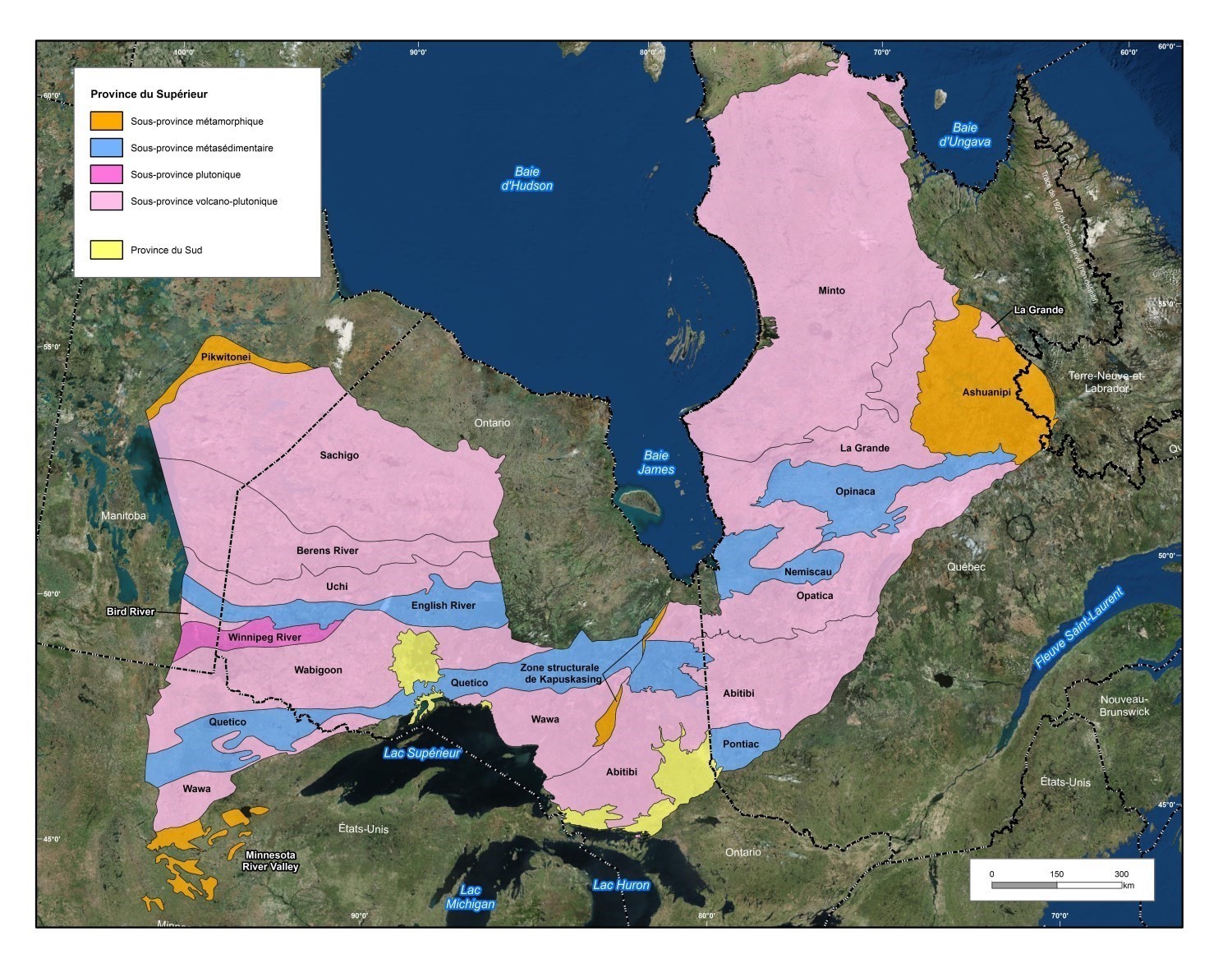 The Opatica Subprovince is part of the great﻿  Superior Province. It extends over 850 km along an ENE-WSW orientation from the Kapuskasing Tectonic Zone in Ontario to the Grenville Front Tectonic Zone. Its average width is about 100 km along an N-S to NNW-SSE axis. On the Quebec side, the Opatica Subprovince is bouded to the north by metasedimentary rocks of the Nemiscau and Opinaca subprovinces, and by volcano-plutonic rocks of the La Grande Subprovince. To the south, it is bounded by green rocks of the Abitibi Subprovince and is cut to the south-east by the Grenville Front. 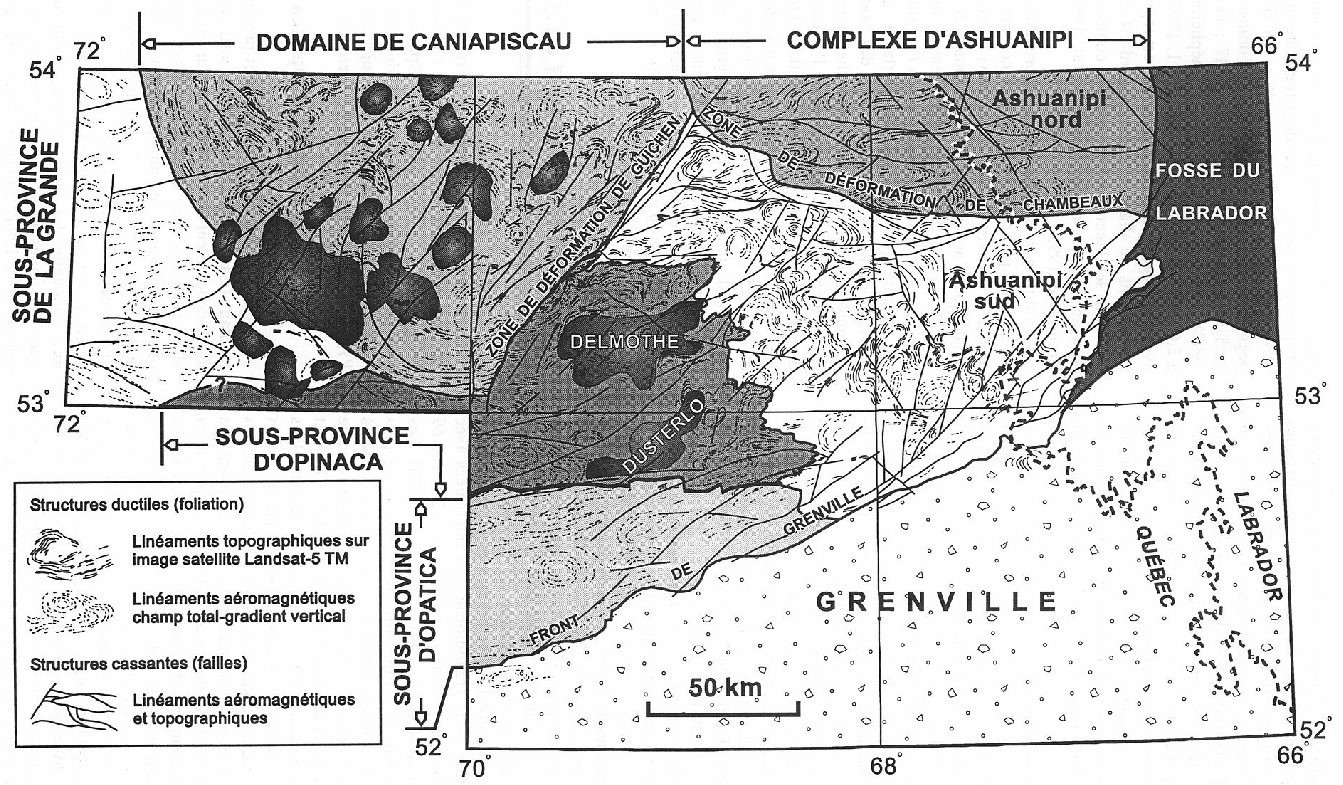 In the Vallard Lake area, identification of large geological domains characterized by magnetic signatures and distinct structural patterns has clarified the boundaries of lithotectonic units in this area (Lamothe et al., 1998). Opatica is distinguished by a relatively homogeneous magnetic signature that is more important than those of Opinaca and Grenville. Opatica is overthrust to the north by the Opinaca and Ashuanipi subprovinces. The Vallard Fault marks the boundary between Opatica and Opinaca in this zone. The transition between the Grenville Province and Opatica is characterized by a narrow mylonitization corridor corresponding to the Grenville Front (Lamothe et al., 1998). 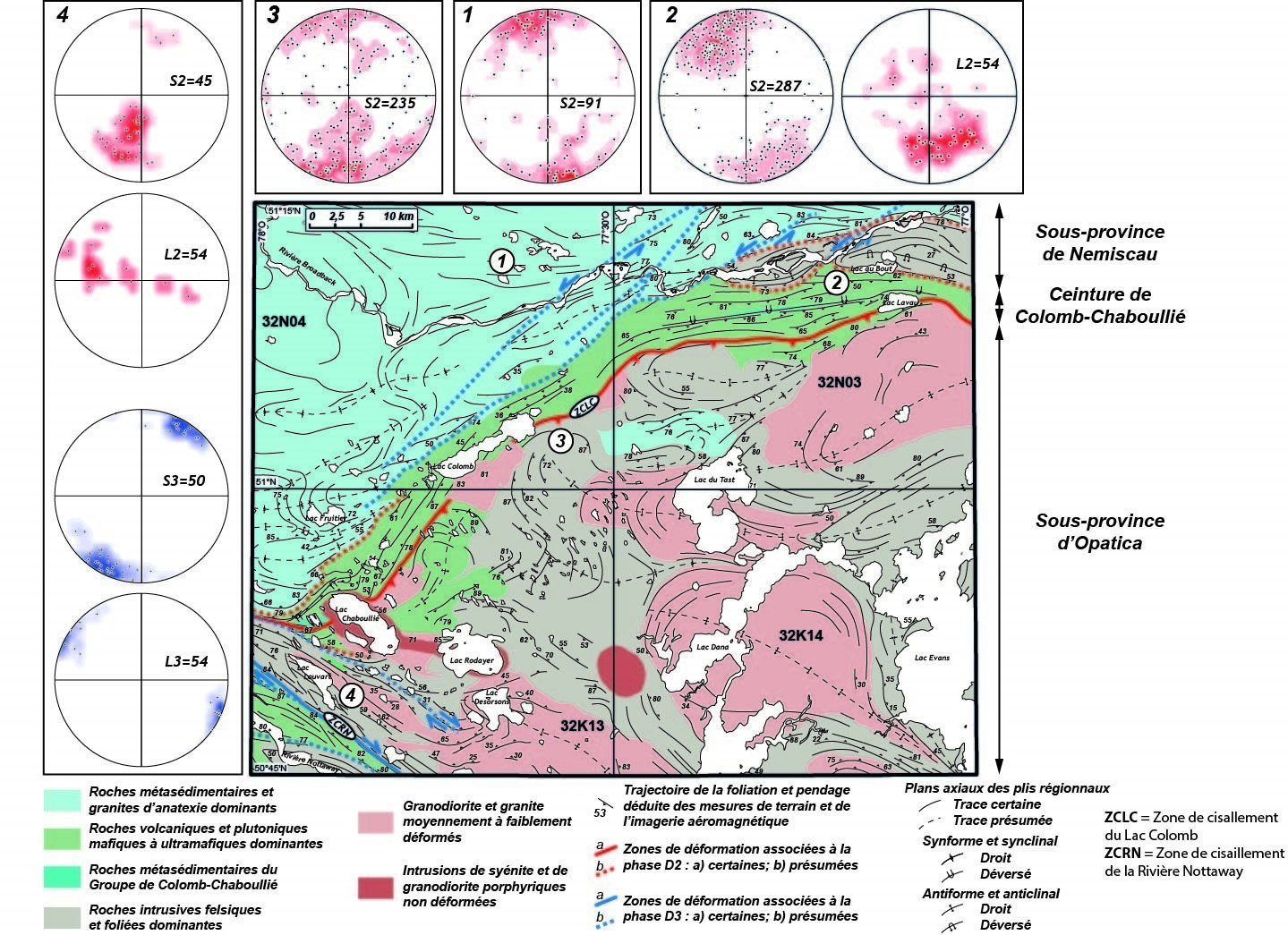 The southern contact of the Opatica Subprovince with the Abitibi Subprovince is rarely observed. Observations along forest roads north-west of Chapais have demonstrated the existence of a regional deformation zone (flattening), but the study of metamorphic assemblages in volcano-sedimentary rocks suggests a gradual increase in metamorphic grade from greenschist facies (Abitibi) to amphibolite facies, over less than 10 km. The deformation elements are continuous and coherent on both sides of the contact. Rocks of the Opatica Subprovince could therefore represent the bedrock of volcanic and sedimentary rocks of Abitibi (Daoudene et al., 2014; 2016). 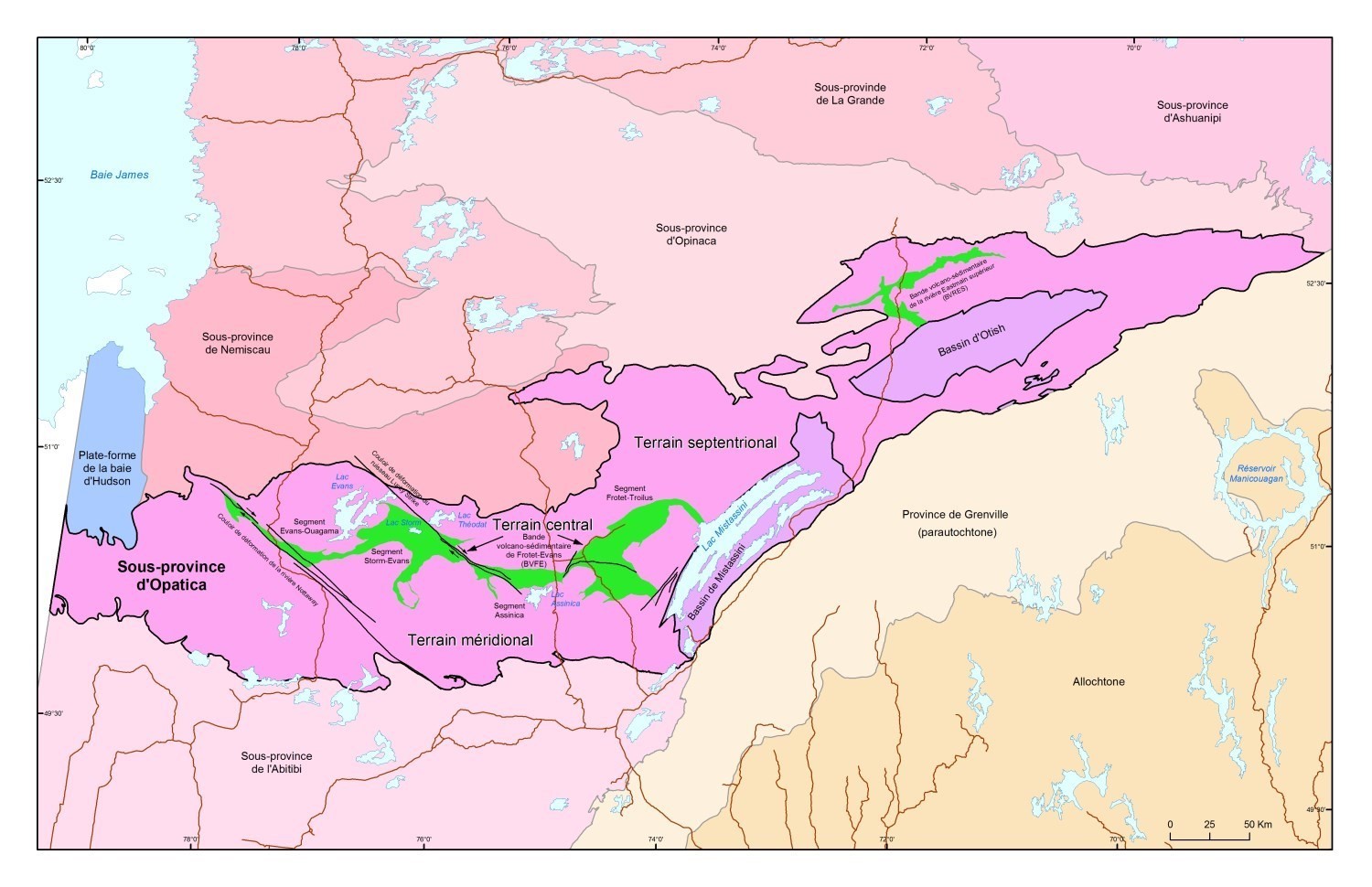 Hocq (1994) subdivides the Opatica Subprovince into three main terrains corresponding to lithological domains. The southern terrain includes all the gneissic units located between the Abitibi and the Frotet-Evans Volcanic Band (FEVB), the central terrain corresponds to the actual FEVB and the northern terrain is formed of gneissic domains north of the FEVB and the Upper Eastmain River Volcano-sedimentary Band (UERVB). In its southeastern part, the Opatica Subprovince is covered by Paleoproterozoic sedimentary rocks of the Mistassini and Otish basins.

The southern terrain corresponds to the Opatica plutonic belt (OPB) of Benn et al. (1992) and Sawyer and Benn (1993). These authors made three N-S structural sections totaling approximately 200 km across this area. They divided the OPB plutonic rocks into five main units:

As part of the mapping of Olga Lake (NTS 32F14) and Goéland Lake (NTS 32F15) areas north of Matagami, rocks of the Opatica Subprovince were subdivided into three informal units designated Aopa1, Aopa2 and Aopa3 (Goutier et al., 2004; Goutier, 2006). The Aopa1 unit grouped gneissic rocks, the Aopa2 unit corresponded to foliated or gneissic tonalites and the Aopa3 unit grouped diorite and quartz diorite dominated zones. In the Amisquioumisca Lake region, rocks of the Aopa1 unit correspond to rocks of the Chensagi Suite affected by deformation zones (e.g., Chensagi Shear Zone), rocks of the Aopa2 unit were assigned to the Chensagi Suite and the rocks of the Aopa3 unit were attributed to the Frédéric Intrusion (Leclerc and Caron-Côté, 2017).

The Frotet-Evans Volcanic Band (FEVB) stretches more than 300 km from the Nottaway River to the Mistassini Lake, ranging in width from a few kilometers to more than 45 km. It is the second largest volcano-sedimentary belt in Quebec after the Abitibi belt. It hosts the Troilus mine, a major copper-gold deposit mined from 1997 to 2010. The FEVB is subdivided into four lithotectonic segments (Boily, 2000). It is formed at its eastern and western ends by two segments of predominantly volcanic rocks (Frotet-Troïlus and Evans-Ouagama). The middle segments (Storm-Evans and Assinica) are dominated by volcano-sedimentary assemblages including a large sedimentary basin (Brisson et al., 1998 a,b; Gosselin, 1996; Simard, 1987).

Stratigraphy of the Frotet-Troilus eastern segment (stratigraphic cross-section) was established by Simard (1983, 1987) and refined by Gosselin (1996). The sequence of four volcano-sedimentary cycles is fully assigned to the Troïlus Group.

The stratigraphic sequence of the Storm-Evans and Assinica middle segments (stratigraphic cross-section) is divided into two groups: basal volcanic units of the Assinica Group topped by sedimentary rocks of the Broadback Group. Also present is a large volume of gabbroic intrusions probably comagmatic with the lavas. Locally, intermediate to mafic intrusions cut sedimentary rocks of the Broadback Group. According to Brisson et al. (1997), the contact between the Broadback and Assinica groups is normal. Rocks of the Assinica Group are comparable to those of the Troïlus Group observed in the eastern part. The stratigraphic arrangement of the middle segment is partially disturbed by the Lucky Strike Shear Zone, a major dextral NW-SE structure.

The northern terrain includes gneissic domains located north of the FEVB. It extends northeast to the Grenville Front, Ashuanipi Subprovince, and presumably under the Mistassini and Otish basins. To the northwest of Evans Lake, the basement is composed of a set of intrusive rocks of tonalitic to dioritic composition belonging to the Rodayer Pluton and Theodat Complex. These units are cut by syn-tectonic to late-tectonic granodiorite or granite intrusions. A new syenite intrusion, the Biteau Syenite, extending from Biteau and Chaboullié lakes to Rodayer Lake, cuts across all units (Bandyayera and Daoudene, 2017). To the northeast, the basement is composed of migmatitic gneisses of granitic to tonalitic composition, metatexite and diatexite with amphibolite and orthogneiss frames. These gneisses contain numerous volcanic and volcano-sedimentary bands forming a complex pattern. This area is also characterized by elongated E-W or N-S gneiss bands between which narrow levels of amphibolites are preserved (Hocq, 1976). Gneisses are cut by late intrusions of granodiorite and monzonite, as well as by pegmatites (Hocq, 1994).

North of the Otish Basin, the Upper Eastmain River Volcano-Sedimentary Band (UERVB) is hosted by a gneissic complex and forms the core of a major structure, the Laviolette Lake Synclinorium (Hocq, 1985). The UERVB is unconformably overlain by Proterozoic rocks of the Otish Basin in the south. Its extension to the east remains poorly known. The UERVB stratigraphy includes metasedimentary rocks of the Bohier Group and volcanic rocks of the René Group. These rocks are cut by granite and granodiorite intrusions (Cadieux Lake Pluton and Érasme Pluton).

At the eastern end of the northern terrain, in the Vallard Lake area (geological map), the Opatica basement is composed of metavolcanic rocks of the Brûlis Group, intruded by granitoids of the Atticoupi Suite (Lamothe et al., 1998).

There is still little geochronological data to establish the timing of emplacement of Opatica rocks. Nevertheless, available data seem to indicate that intrusive rocks of the Opatica Subprovince occurred between 2.82 Ga and 2.68 Ga (Davis et al., 1995). Some areas of the Opatica Subprovince show local evidence of partial melting (Sawyer and Benn, 1992; Hocq, 1994), dated to around 2.68-2.67 Ga (Sawyer et al., 1998).

The shallow dipping lithospheric reflectors that extend northerly from the Abitibi-Opatica boundary to the MOHO (i.e. at a depth of approximately 44 km), identified on the seismic profiles of the LITHOPROBE survey, were first interpreted as the remnant of a suture zone between two accreted terranes (Calvert et al., 1995; Calvert and Ludden, 1999). A new interpretation based on a reassessment of seismic profiles and new geological, U-Pb geochronological and 40Ar/39Ar thermochronological data indicate that the Abitibi and Opatica subprovinces constitute a single lithotectonic entity where Opatica constitutes the basal portion of the Abitibi crust: 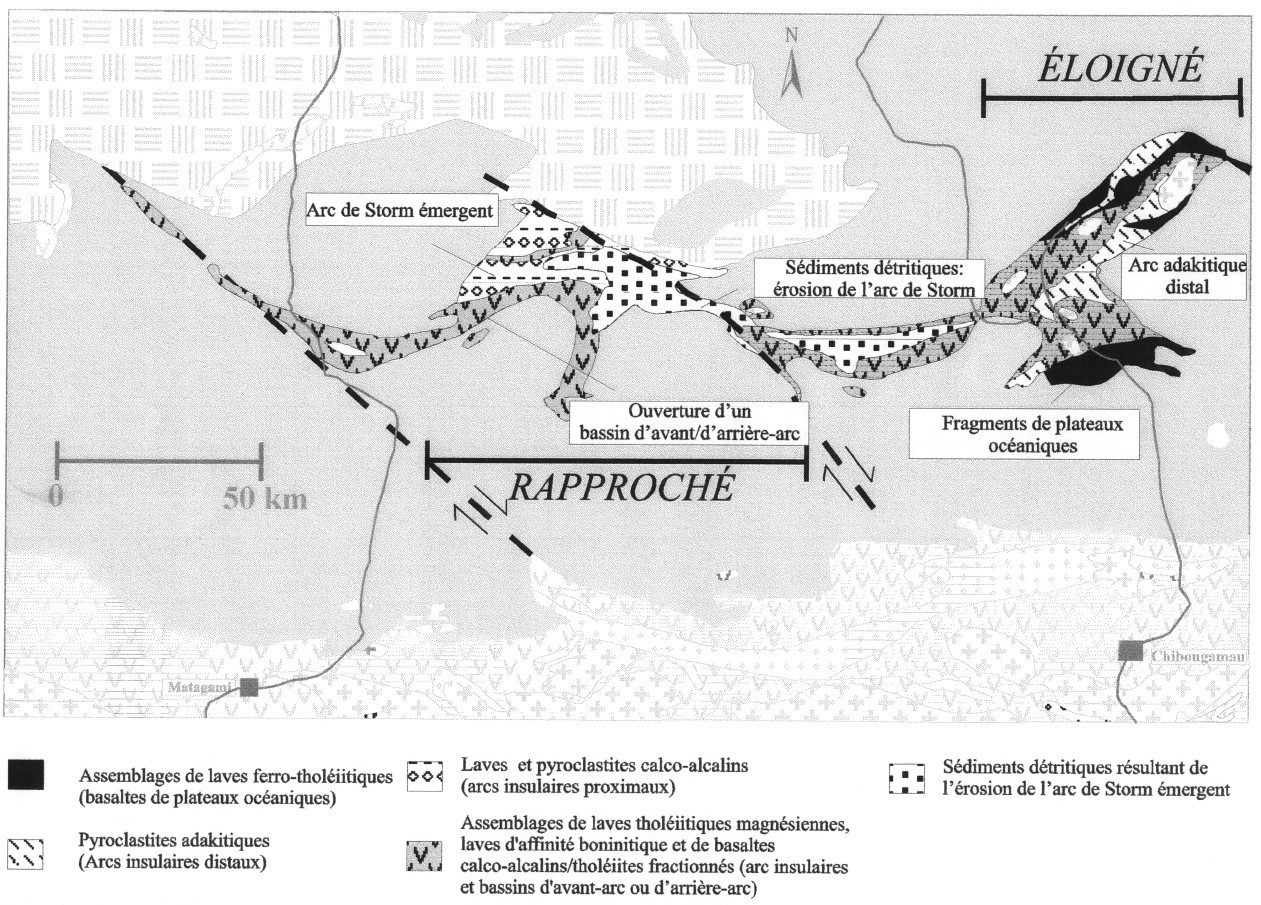 The age of FEVB volcanic and plutonic assemblages is largely unknown, making it difficult to develop a tectono-magmatic evolution model. However, Boily (1998, 1999, 2000) proposed different models of evolution for the various segments of the FEVB. The western segments would represent a forearc basin sequence located at the edge of an emerging mature oceanic arc. The eastern extension (Frotet-Troïlus) would be the portion of the forearc basin furthest from the Storm arc where there would be a non-emergent « adakitic » arc and oceanic plateau slab sequences.

In the northern terrain, no isotopic dating has been performed on the volcano-plutonic assemblages of the UERVB. Correlations with the FEVB or gneissic or plutonic host rocks are therefore difficult to establish. Boily (1999) proposes an evolution scenario of the UERVB that implies tectonic slices of oceanic plateaus and detrital sediments, which are interpreted as fragments of the Opinaca Subprovince sedimentary basin.