The Eastmain-Sorbier Shear Zone ( ZCesb) was defined by Beauchamp (2019) following a mapping survey conducted in the Cadieux Lake area in the summer of 2018. It corresponds to a large shear zone that separates highly migmatized metasedimentary and igneous rocks of the Ayr Structural Domain from slightly migmatized metasedimentary rocks of the Mabille Structural Domain. The description of the ZCesb is mainly based on geological observations collected by Beauchamp (2019), as well as on the analysis of geophysical imagery (total magnetic field and vertical gradient) from the SIGÉOM and Wade et al., 2014.

The Eastmain-Sorbier Shear Zone forms a  ENE-WSW  lenticular strip bounded to the north and south by shear zones. The Sorbier and Eastmain shear zones were drawn using discontinuities evident on magnetic susceptibility and vertical gradient maps available in the SIGÉOM.

Stratigraphic units that are part of the Eastmain-Sorbier Shear Zone are: Metasedimentary rocks (nAlgi2a, nAlgi3a and nAlgi10) of the Laguiche Complex: Despite strong metamorphic recrystallization of metasedimentary units of this structural domain, the main tectonometamorphic fabric Sn is clearly visible. It is defined by the alignment of biotite along flattening planes. In thin sections, the preferential orientation of euhedral to subhedral biotite flakes clearly marks foliation in granoblastic paragneiss. The main fabric Sn is commonly revealed by migmatitic banding having a stromatic texture. Lineations Ln plunge slightly to moderately westwards. 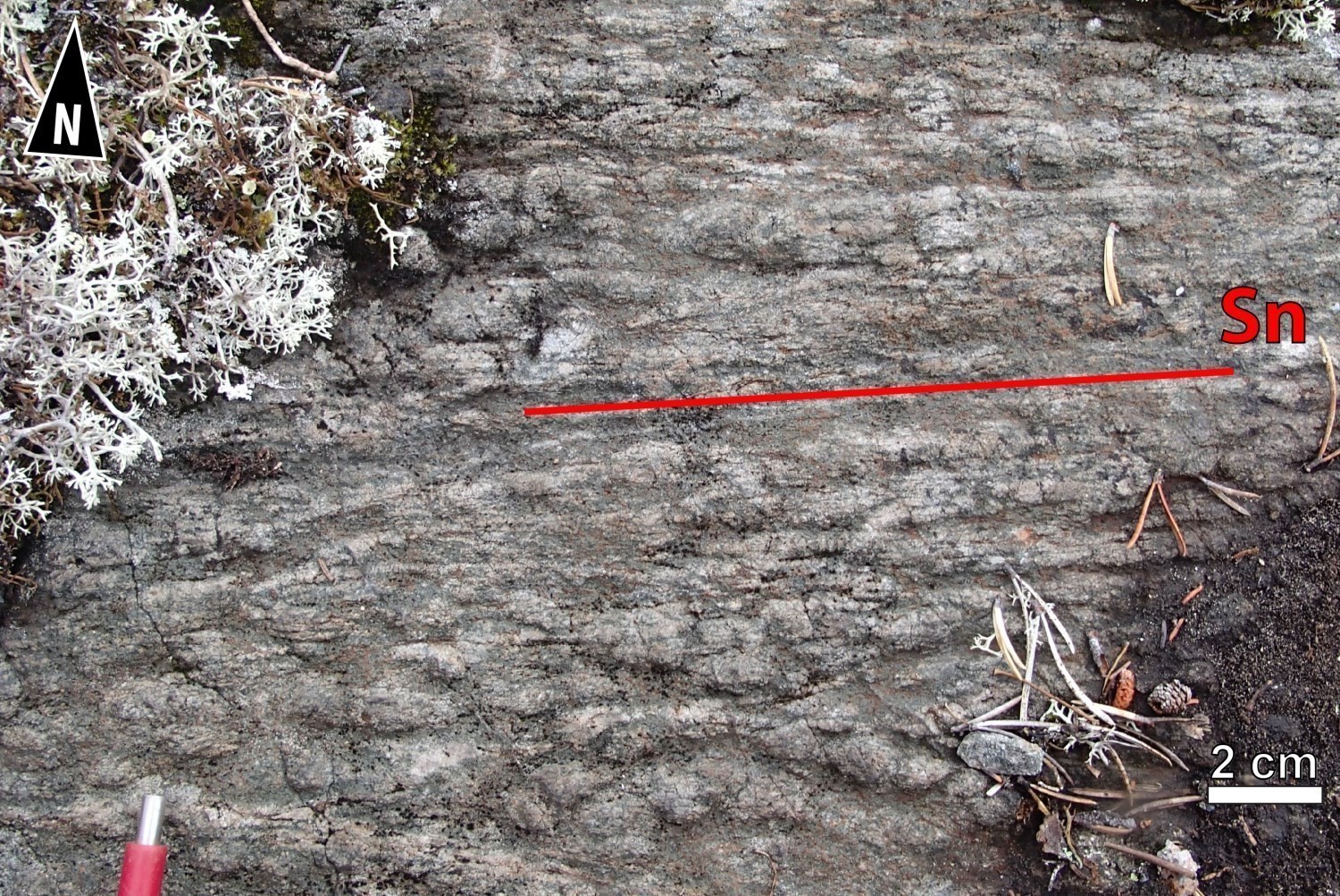 The Sorbier Mafic-Ultramafic Suite: In rocks of the Sorbier Mafic-Ultramafic Suite, the main fabric Sn is still well developed. Millimetric biotite laminae run parallel to flattening plane Sn. The alignment of hornblende and the stretching of olivine cumulates and orthopyroxene porphyroblasts are also along Sn planes. However, tremolite and anthophyllite are not oriented. 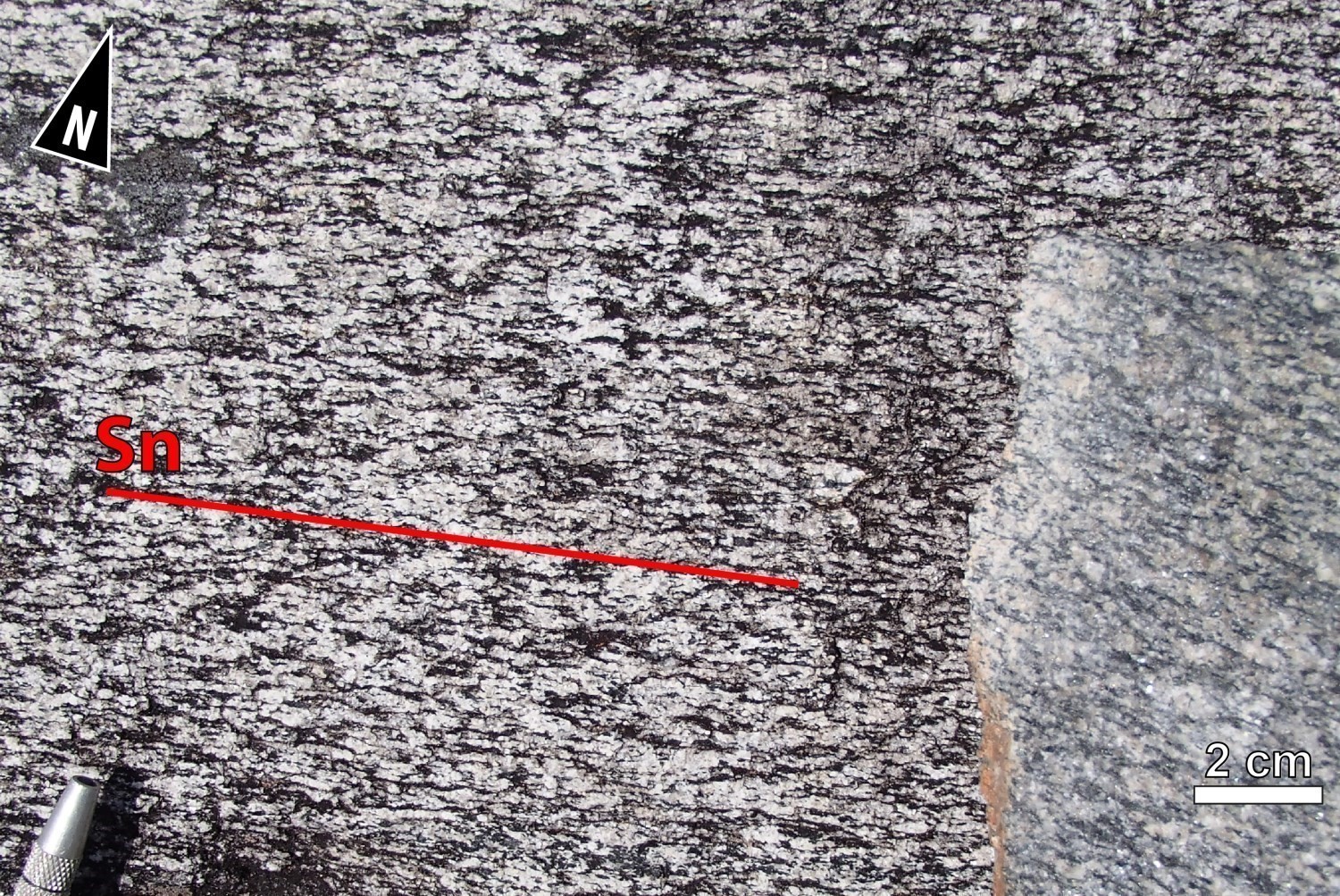 The Lépante Suite: The main fabric Sn is defined as penetrative tectonometamorphic foliation. Foliation planes are marked by the alignment of ferromagnesian minerals (hornblende ± biotite). In the most deformed areas, flattening of quartz and feldspars is observed.

Lithological Unit I2a (sequence of variably migmatized, foliated to gneissic quartz diorite, tonalite and diorite): The Sn fabric is represented by tectonometamorphic foliation or gneissosity. The intermediate to felsic rock sequence is variably migmatized. The stromatic mobilisate is commonly subparallel to the Sn fabric. Foliation planes are marked by the alignment of ferromagnesian minerals (hornblende ± biotite). Lithological Unit I1Ba ((foliated biotite ± magnetite granite): In the foliated granite unit (I1Ba), foliation Sn is defined by the alignment of quartz and biotite. The presence of quartz rods and bands that mark stretching is noticeable.

At the scale of the ZCesb, regional foliation Sn, gneissosity Gn and migmatitic banding Mn are globally WSW-directed. These structures generally have moderate dips northward (stereogram). However, foliation poles line up on a great circle oriented NNE-SSW, suggesting the presence of folding. The theoretical fold axis was calculated at 255°/07°. Mineral and stretch lineations plunge slightly westwards. 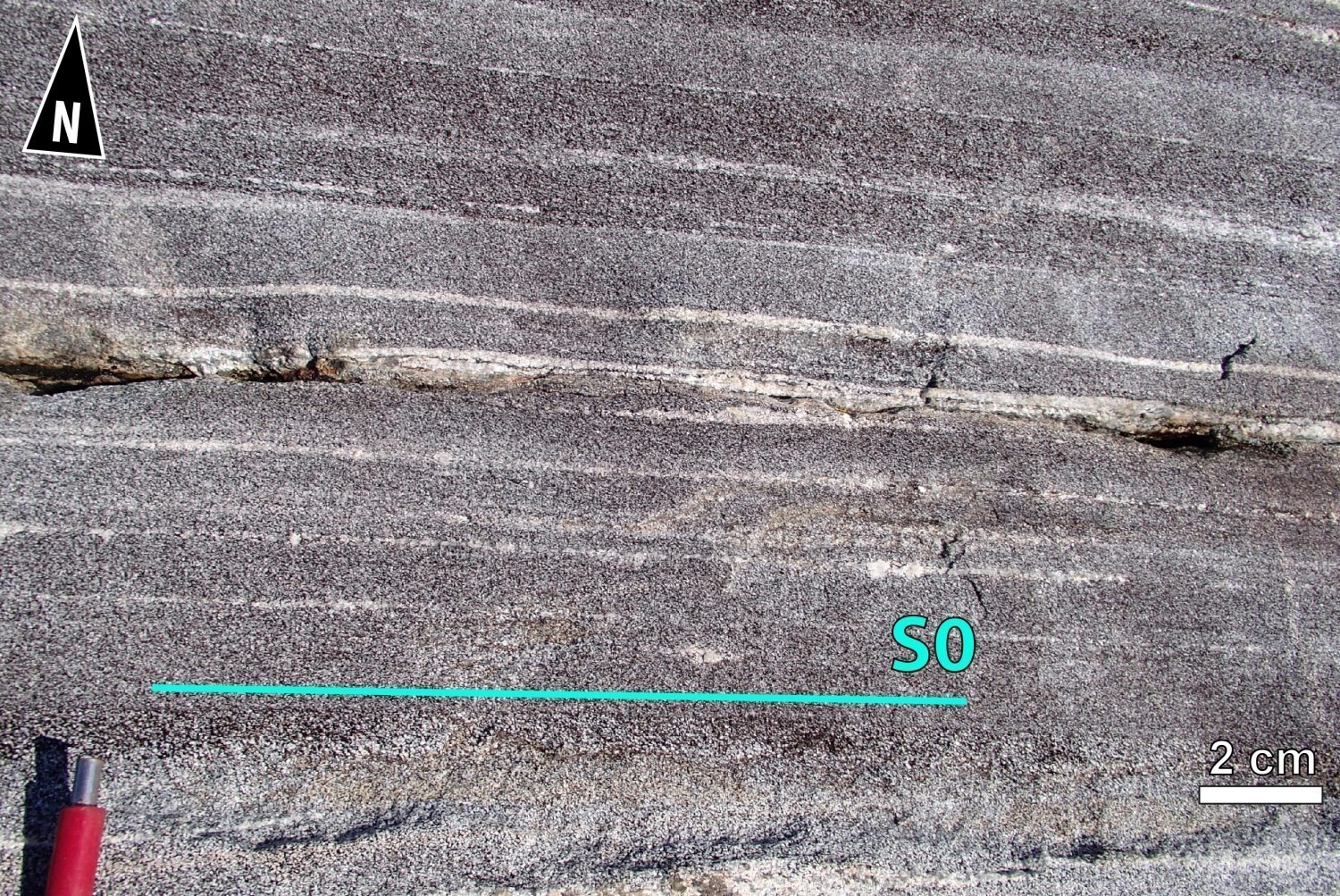 Magmatic Layering: Rocks of the Sorbier Mafic-Ultramafic Suite locally expose primary magmatic layering. This layering is defined by 10 cm to 30 cm thick layers containing 50% to 80% olivine cumulates alternating with layers without cumulates. Olivine pseudomorphs, which are replaced by serpentine and magnetite, are generally 1 cm to 2 cm thick (outcrop 18-MP-5148). 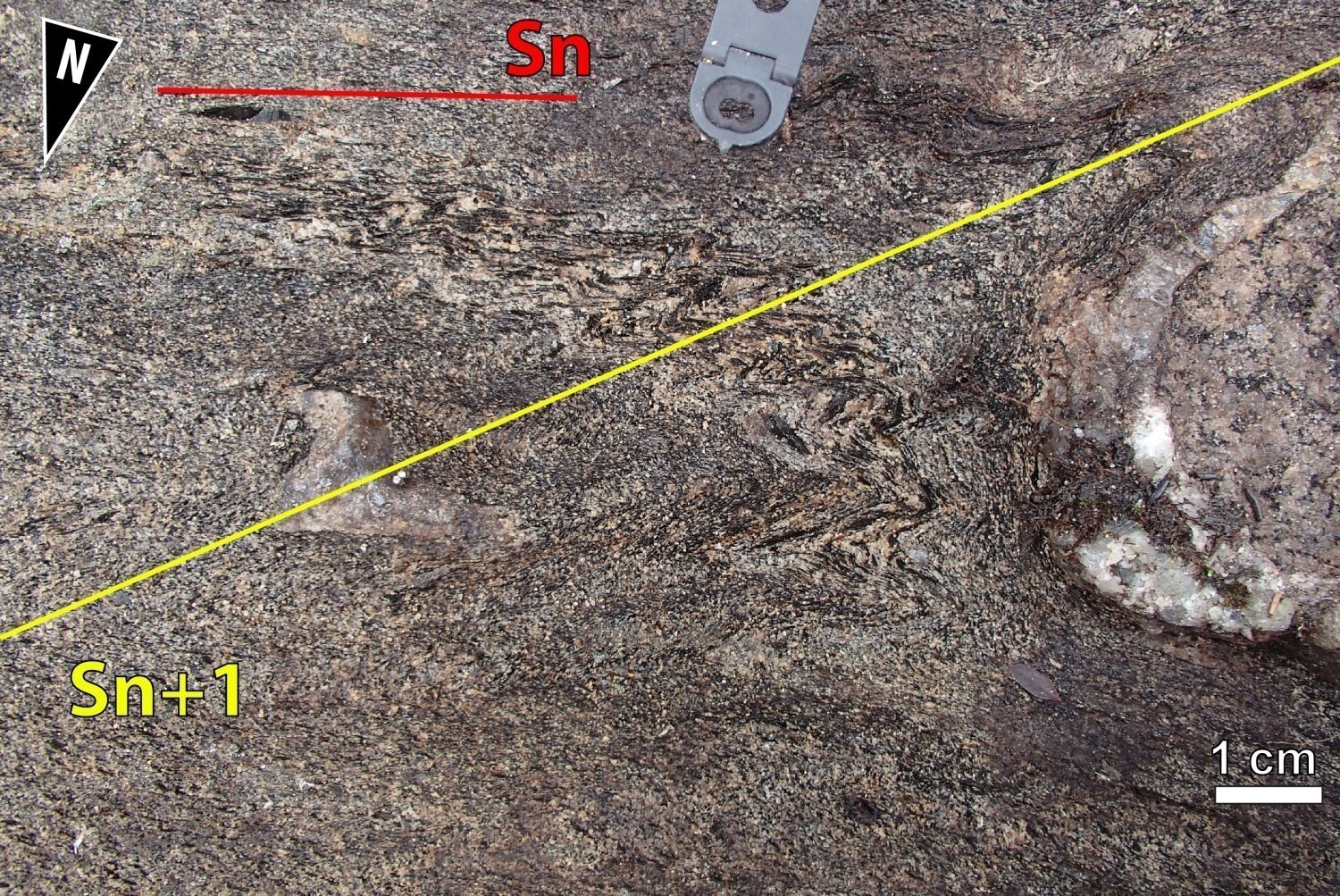 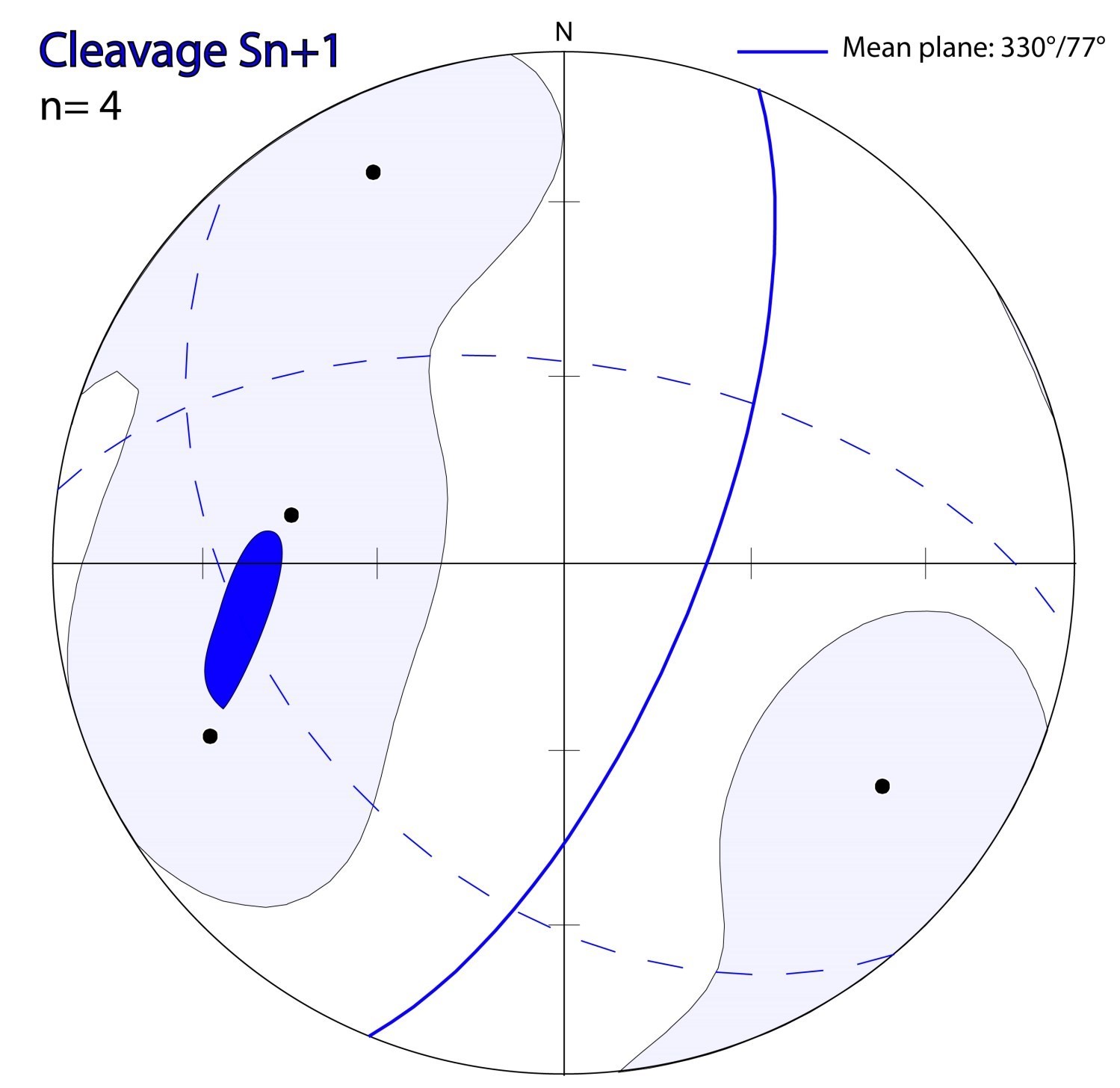 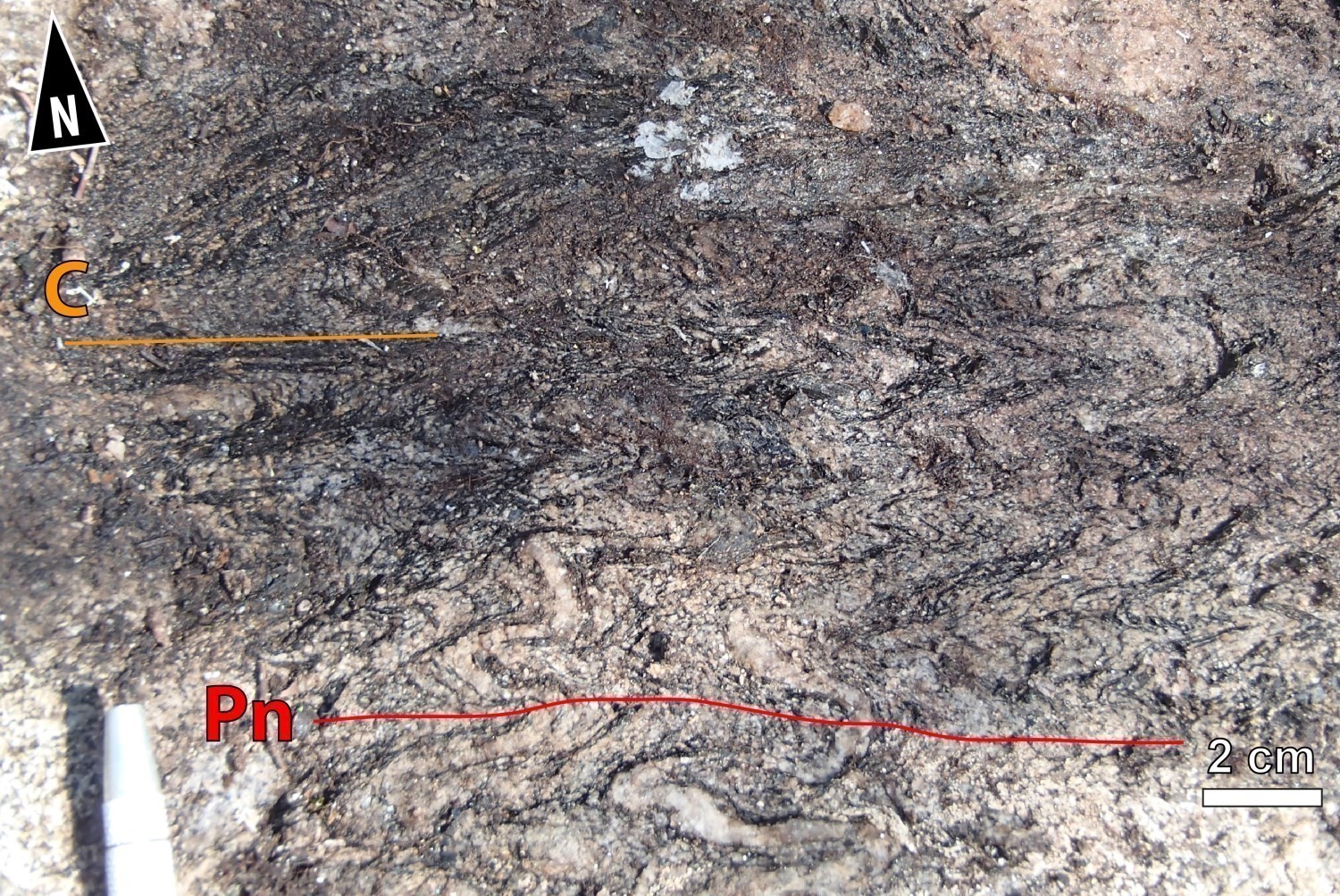 Whether in paragneiss of the Laguiche Complex or in the various intrusive rocks of the ZCesb, regional foliation Sn is generally affected by polyphase folding. Pn-1 folds were first interpreted using interference figures visible on magnetic maps (SIGÉOM and Wade et al., 2014). Regional Pn folds are common, and are documented both on outcrops and magnetic maps. They are tight, isoclinal and open. Their axial trace is roughly oriented E-W and their axes plunge slightly to moderately towards the east or west. 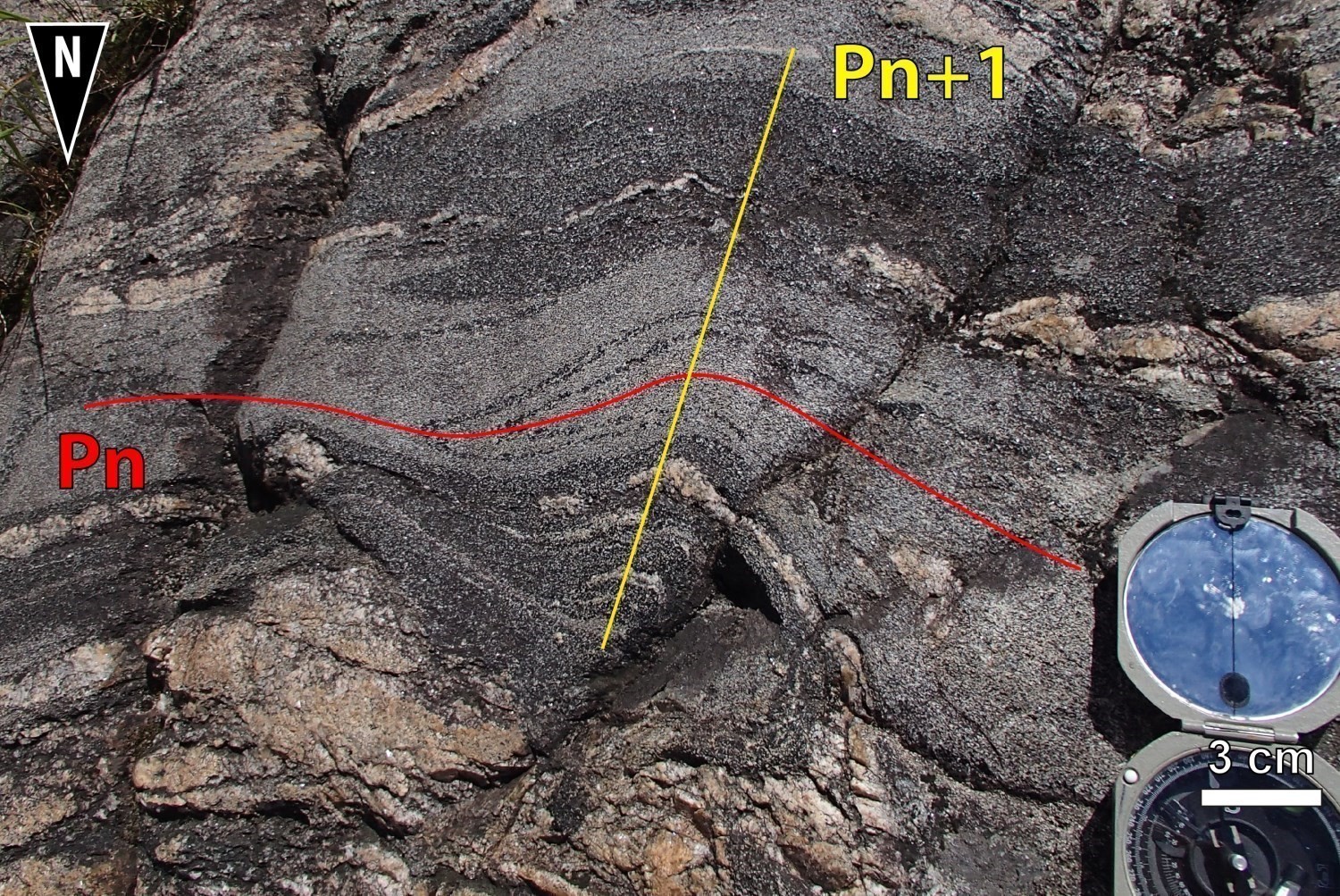 West of Lavallette Lake, magnetic maps (SIGÉOM and Wade et al., 2014) clearly define a Pn fold closure of kilometric amplitude. This fold’s trace was followed using folded rock klippes of the Sorbier Mafic-Ultramafic Suite characterized by a strong magnetic susceptibility. Pn folds are folded by Pn+1 folds. Pn+1 folds are chevron-shaped or open and the trace of their axial planes varies from NE-SW to NNE-SSW. 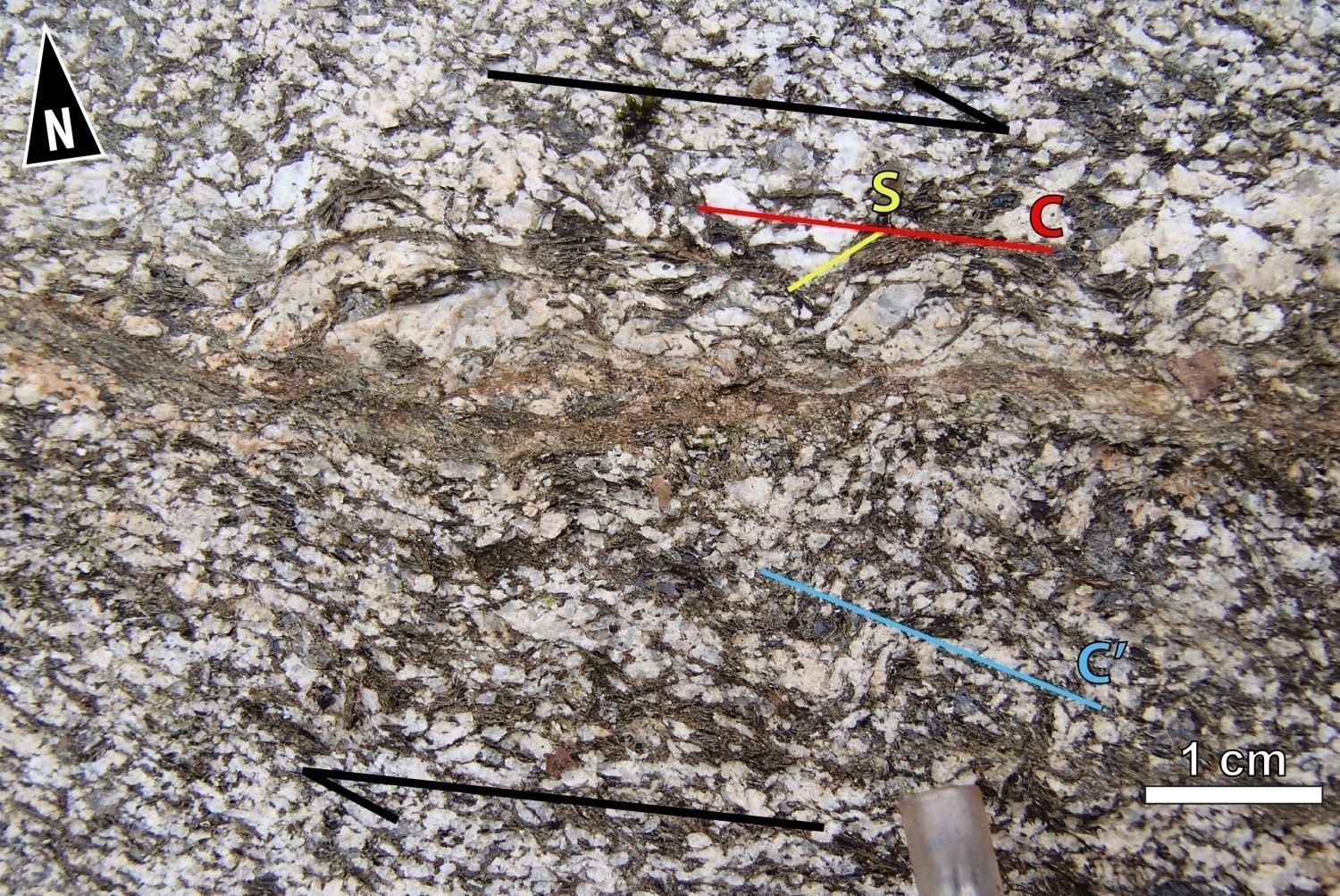 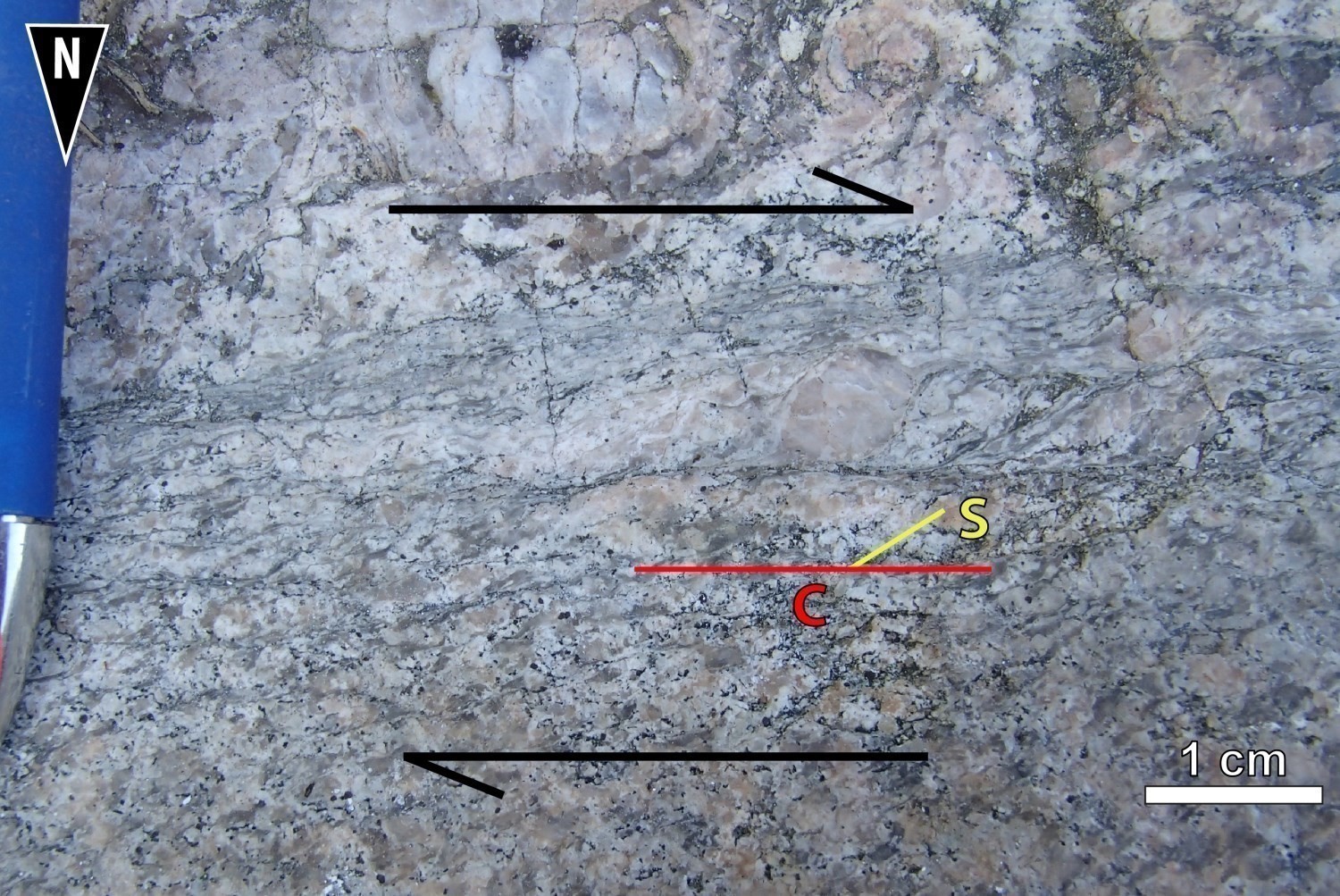 Kinematic indicators observed on outcrops indicate that the shear zone mainly accommodated dextral horizontal movement. In some places, the movement is rather reverse-dextral transpressive. Kinematic indicators that have been identified are: C-S-C’ fabrics, shear bands, sigma and delta porphyroclasts, and porphyroclastic bands. On a small scale, the shape of the corridor also suggests boudinage with dextral movement.

Metasedimentary rocks of the Laguiche Complex, which represent most rocks of the Opinaca Subprovince, are separated into two tectonometamorphic domains by the Eastmain-Sorbier Shear Zone, a broad dextral strike-slip corridor. The NW part of the map (Ayr Structural Domain) exposes highly migmatized rocks (diatexite, metatexite and lesser amounts of paragneiss) that formed at a deeper structural layer than those located south of the shear corridor (Mabille Structural Domain). Metasedimentary rocks south of the Eastmain-Sorbier Shear Zone consist of paragneiss derived from wacke and arenite containing ≤10% mobilisate.

The morphology of the Eastmain-Sorbier Shear Zone and its internal architecture are evidence of significant crustal deformation, associated with strong N-S shortening, followed by dextral strike-slip movement. Reverse vertical movement seems to be responsible for the juxtaposition of the two tectonometamophic domains of the Laguiche Complex, which would explain the structural and metamorphic contrast. The dextral strike-slip movement is later than the vertical movement. 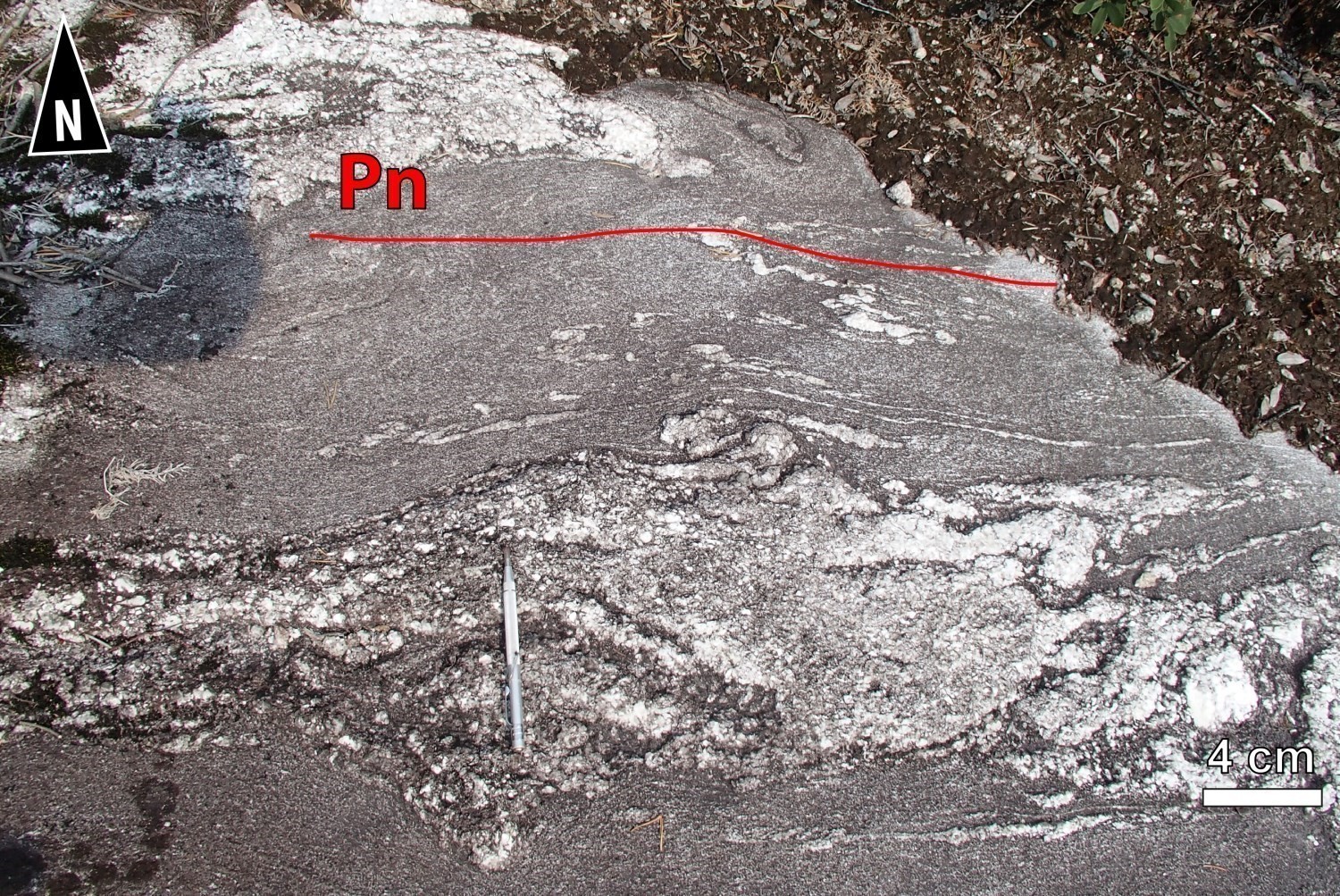 In the ZCesb, paragneiss of the Laguiche Complex are commonly migmatized. The percentage of mobilisate varies from a few percent to >50%. Along the Eastmain and Sorbier shear zones, rocks appear to be more injected with mobilisate. A biotite ± garnet ± cordierite mineralogical assemblage indicates that paragneiss of the Laguiche Complex have reached metamorphic conditions typical of the amphibolite facies. The absence of orthopyroxene suggests that the granulitic facies was not reached. 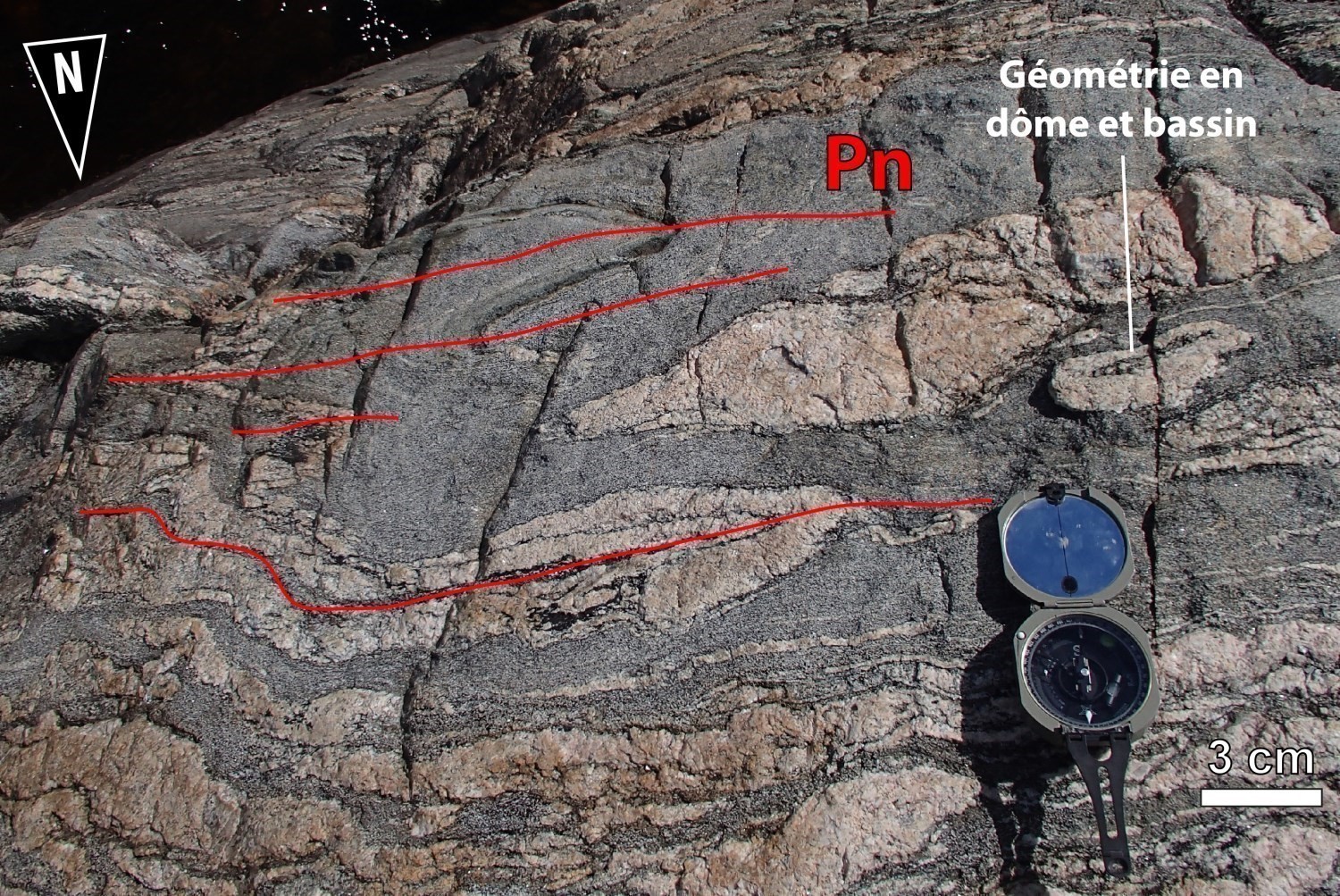 The sequence of foliated quartz diorite, tonalite and diorite (I2a) that is present in the ZCesb is granoblastic, gneissic and variably migmatized. The hornblende-clinopyroxene mineralogical assemblage suggests that these rocks have undergone amphibolite facies metamorphism. A temperature of at least 700°C was reached to partially melt this sequence (Sawyer, 2008).

The ZCesb differs from neighbouring domains by a highly structured magnetic susceptibility. The domain forms more or less continuous strips, oriented globally ESE-WNW and hectometre-wide, with varying magnetic intensity. The attitude of deformation is clearly visible thanks to the string of rocks of the Sorbier Mafic-Ultramafc Suite that form folded and dismembered kilometric bodies emplaced in the Eastmain-Sorbier Shear Zone. Pn folds of kilometric amplitude are also visible on magnetic maps.

The Cadieux Lake map clearly illustrates that the Sorbier Shear is folded by a Pn fold of kilometric amplitude. Its formation is therefore prior to regional deformation Dn. The dextral strike-slip movement of the ZCesb, which is later, is younger than the age of the units it affects, and therefore later than the deposition the sedimentary rocks of the Laguiche Complex, whose depositional age is <2694 ±10 Ma (sample 18-WM-3073, Davis, 2019).