The Mabille Structural Domain was defined by Beauchamp (2019) following a mapping survey conducted in the Cadieux Lake area in the summer of 2018. Its description is based primarily on geological observations gathered during the Ministère’s field work, as well as on the analysis of geophysical imagery (total magnetic field and vertical gradient) from the SIGÉOM.

The Mabille Structural Domain forms a wide E-W oriented strip located between the Eastmain-Sorbier Shear Zone to the north and the Maingault Structural Domain to the south. The northern boundary is marked by the Eastmain Shear Zone, while the southern boundary corresponds to an undetermined shear zone possibly responsible for the juxtaposition of the Opatica and Opinaca subprovinces.

The Mabille Structural Domain is mainly composed of sedimentary rocks belonging to the Opinaca Subprovince, but also of felsic to ultramafic intrusive units cutting the Laguiche Complex, namely: 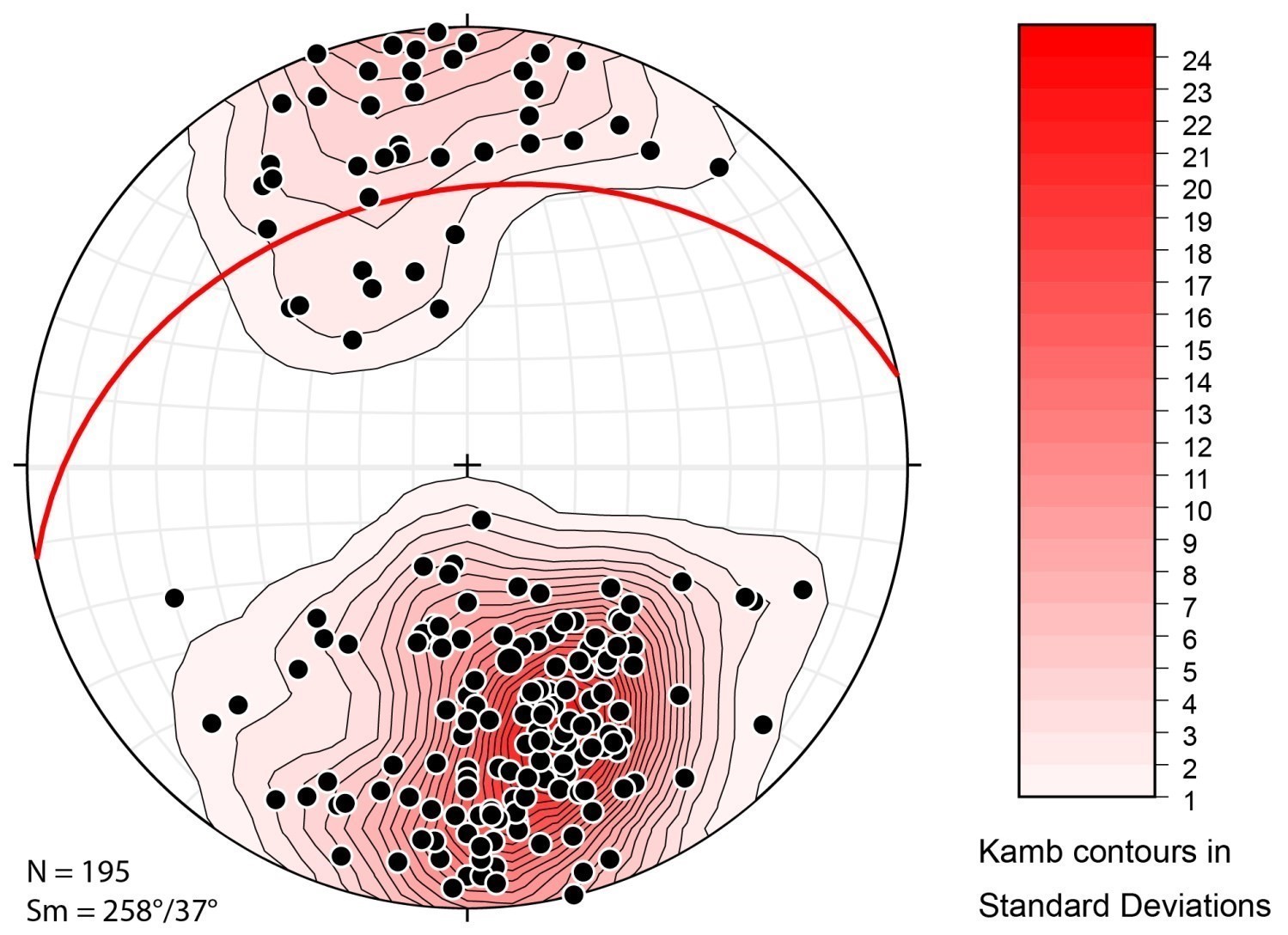 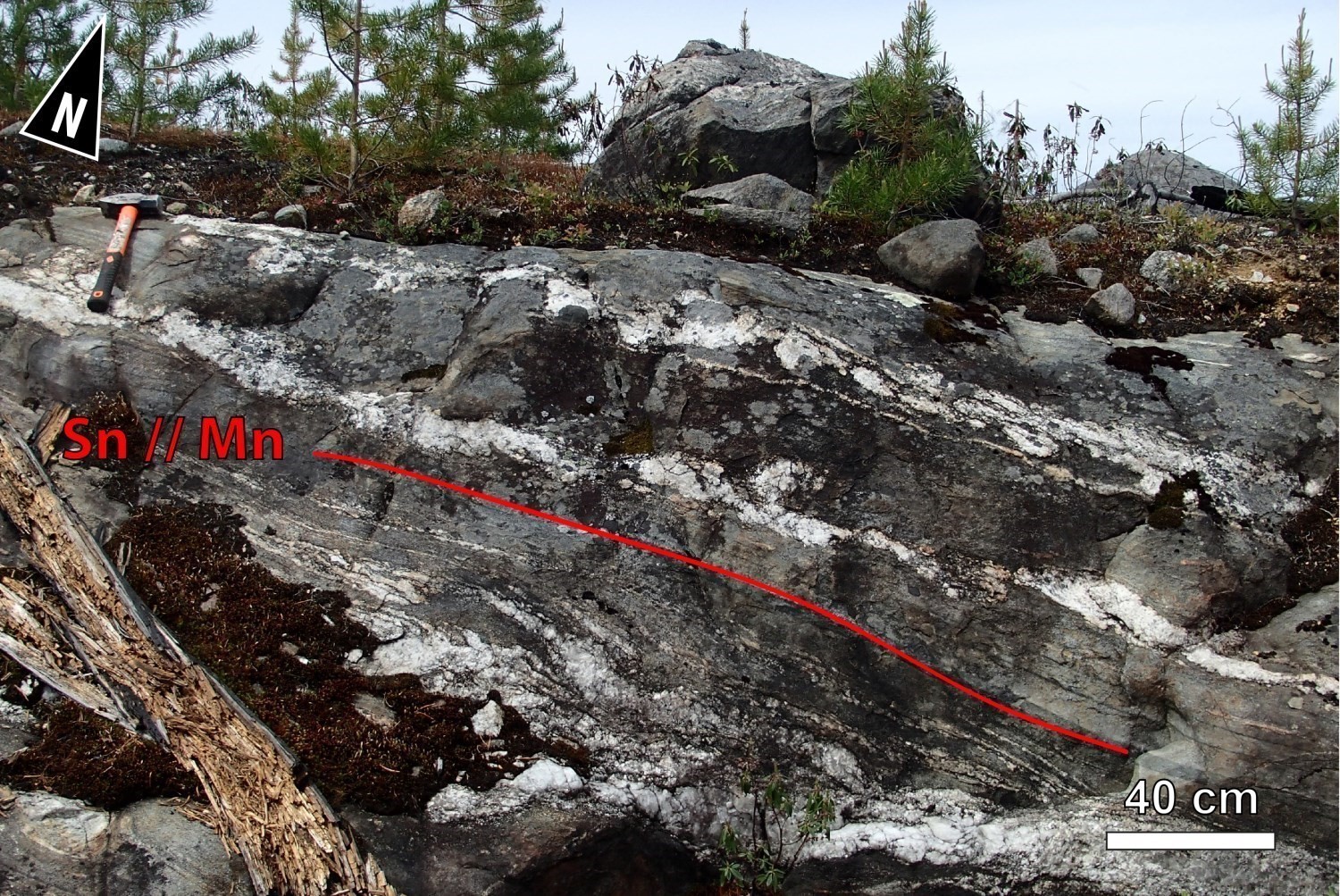 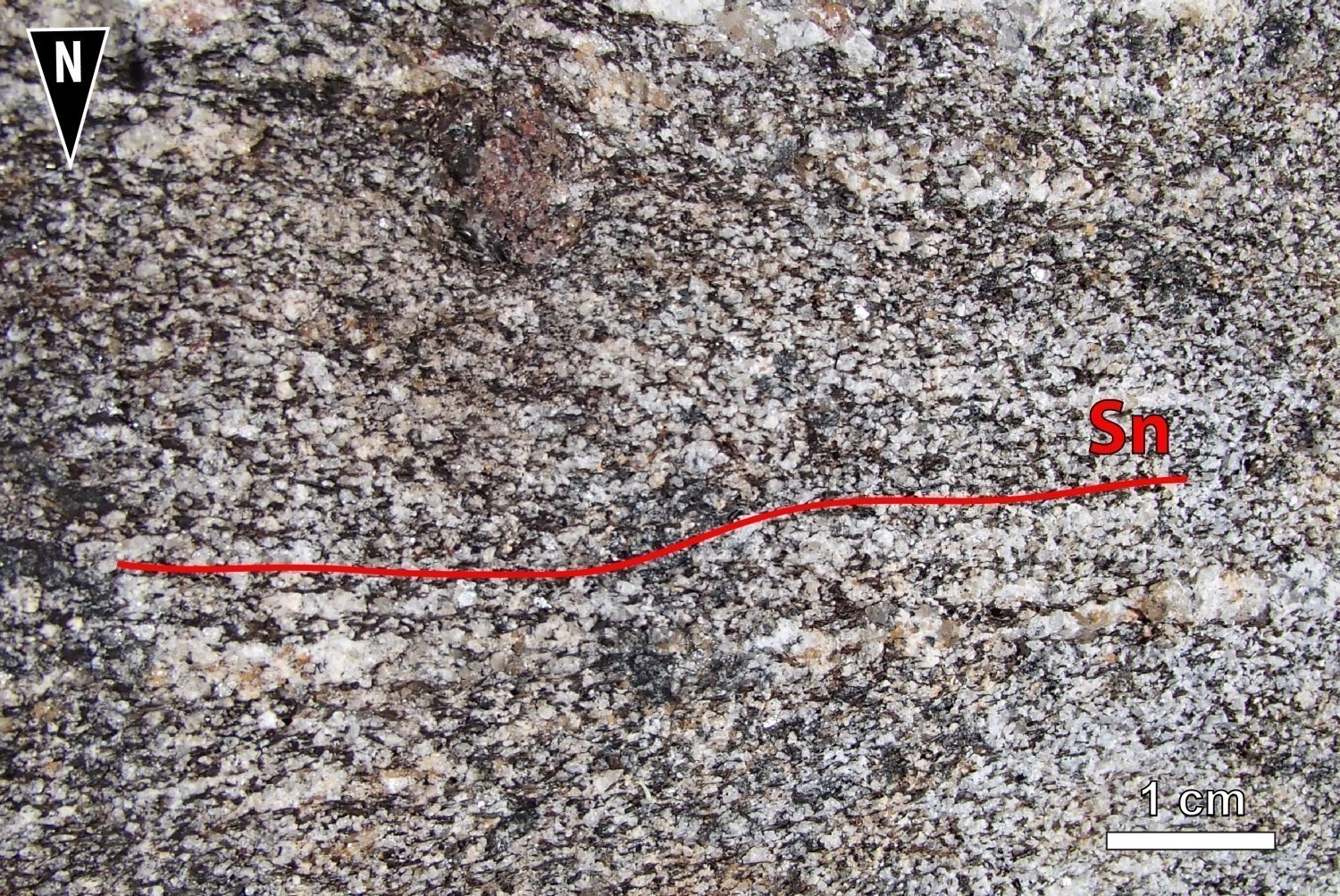 At the domain scale, regional foliation Sn is relatively constant, generally E-W oriented and commonly having moderate dips (stereogram). It is commonly characterized by migmatitic banding that characterizes paragneiss of the Laguiche Complex and by the preferential orientation of biotite flakes. In plutonic rock units of the Mabille Complex, regional foliation Sn is also marked by the preferential orientation of ferromagnesian minerals, mainly hornblende and biotite. In the western part of sheet 33A02, two lineations are down-dip northward.

Stratification S0 is rarely observable in the field. However, it can be locally identified in areas where paragneiss of the Laguiche Complex display compositional banding. Where it is observed, stratification S0 is parallel to regional foliation Sn. However, it is likely that the latter has been transposed. On rare outcrops (e.g. 18-MP-5181), schistosity Sn-1 can be cut by regional foliation Sn. Sn-1 is roughly N-S and measured at 354°/22°.

Lineations Ln are parallel to the structural grain, which can mark lateral extrusion during compression or lateral strike-slip movement. To the north of the Mabille Complex, they are oriented eastward, while within the complex and further south, they are oriented westward and have a shallow to moderate plunge (25° on average) indicating overall dextral movement. 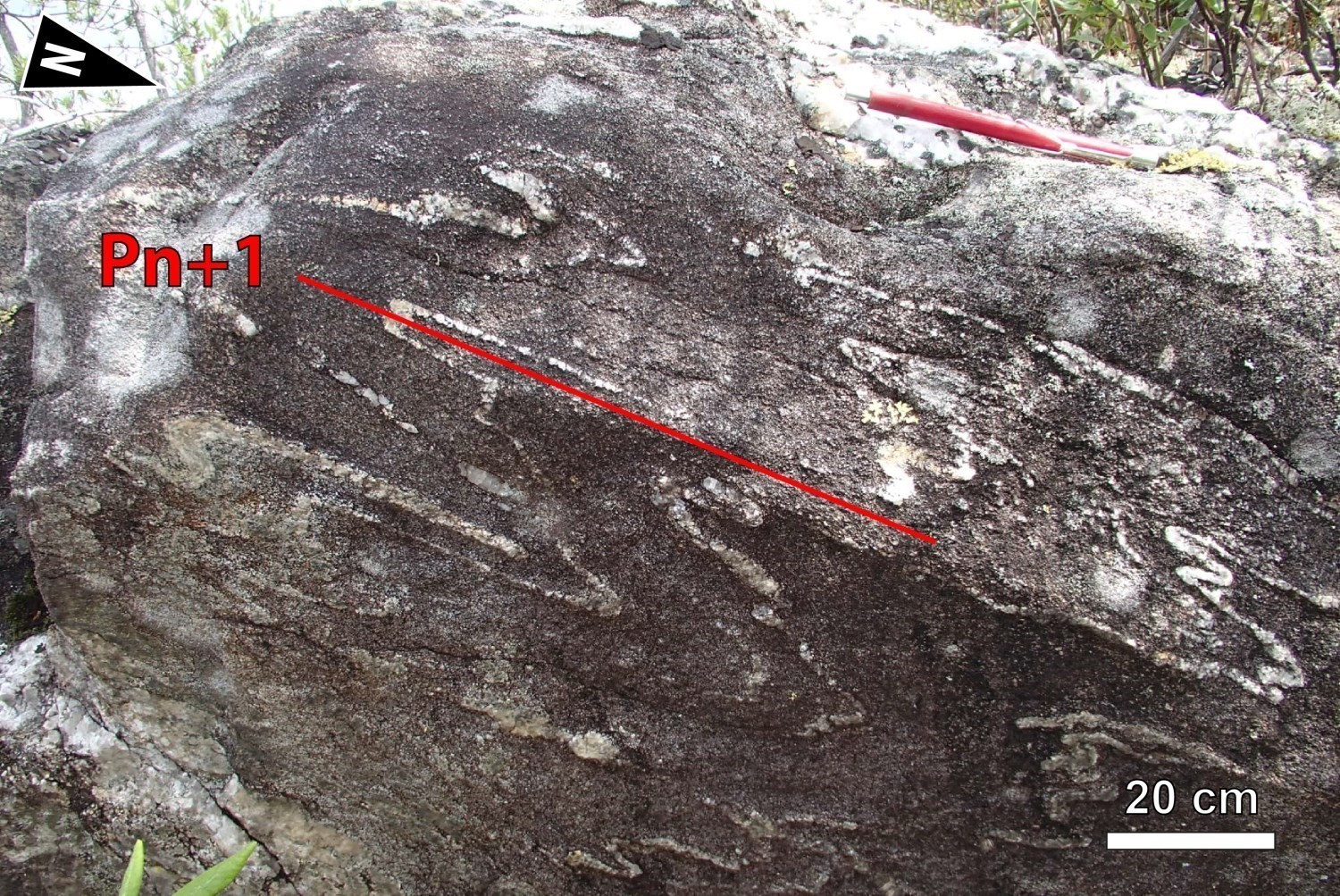 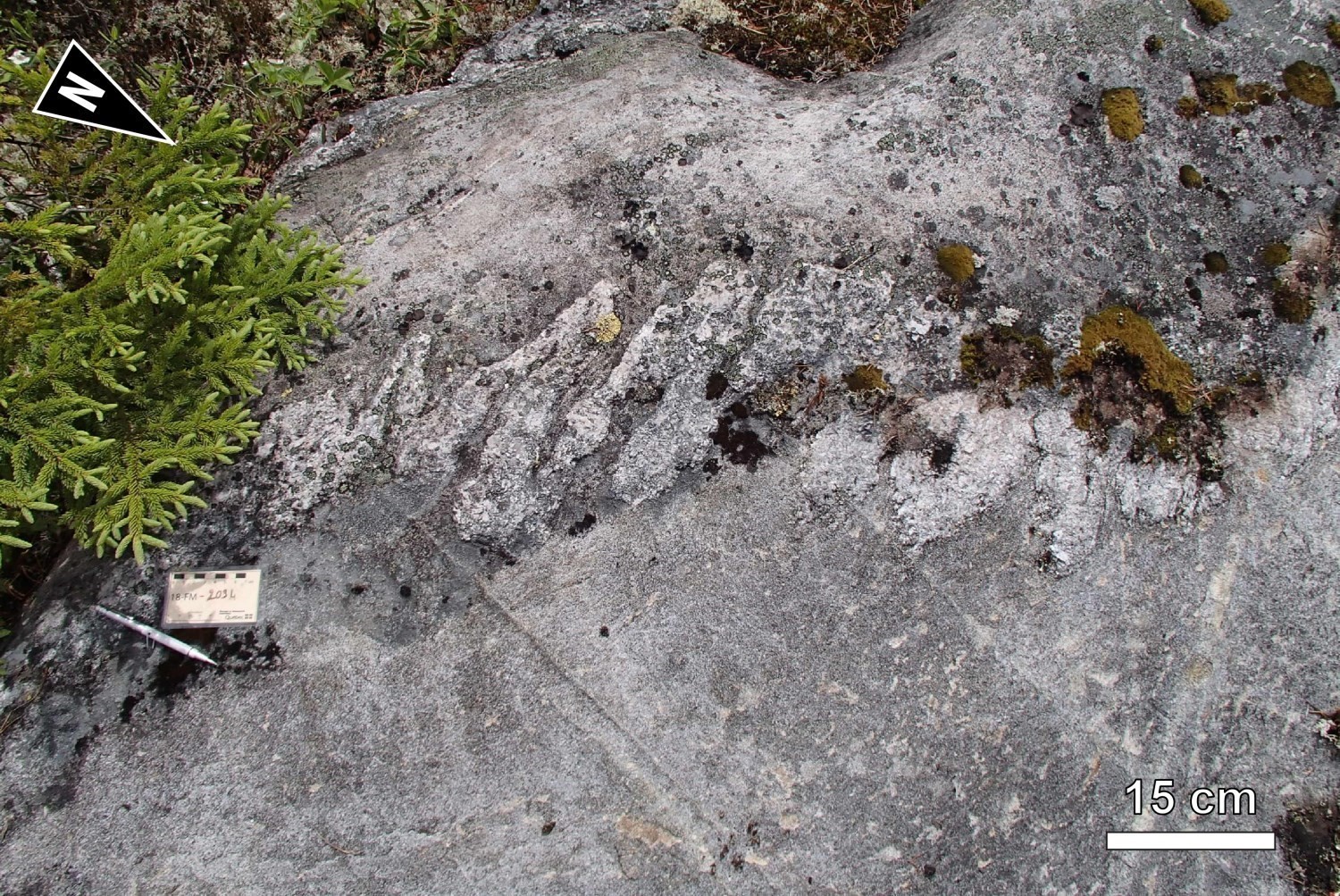 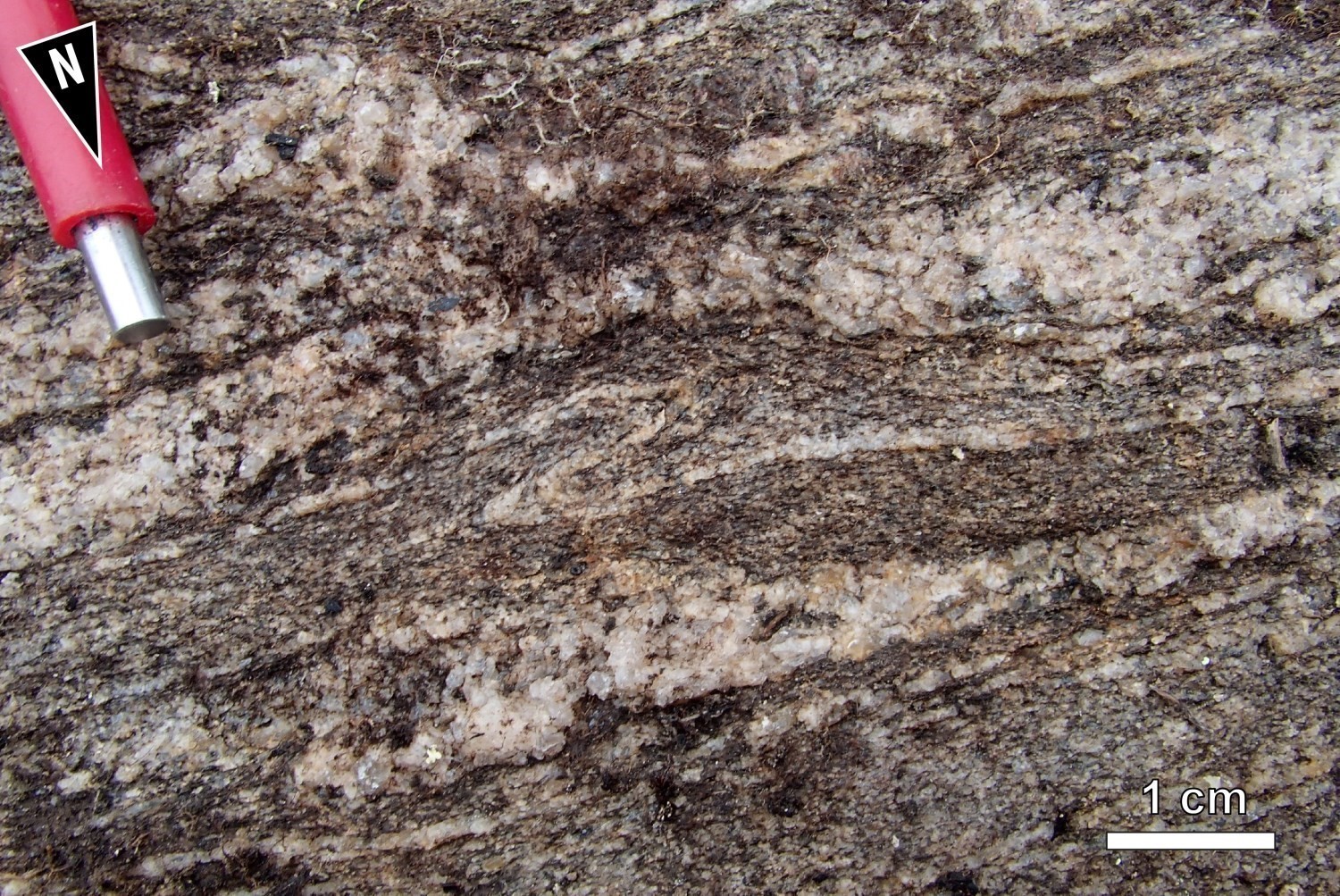 Rocks of the Laguiche Complex are affected by folding which, in general, is difficult to interpret as it can be confused with migmatization structures. Folds of Dn-1 generation having undulating axial planes, generally oriented NNW-SSE, were interpreted in the Mabille Complex. Dn-1 folds are folded by a Dn generation which correspond to numerous tight or isoclinal folds, having a roughly E-W oriented axial trace and overturned and straight dips. These Pn folds, which axial planes are steeply dipping, are related to N-S shortening that may have contributed to the intrusion of plutonic rocks of the Mabille Complex. Rocks are also affected by drag folds which are particularly visible on geophysical anomaly maps and on outcrops.

With the help of magnetic anomaly maps, several brittle faults were identified in the north and in the SW part of the domain. Their orientation is mainly NW-SE. They offset rocks in a dextral manner and their dip is steep.

The Mabille Structural Domain is dominated by E-W orinetd regional deformation Dn caused by N-S shortening. At least two deformation phases affect the rocks of the domain. The first, Dn, is marked by E-W oriented synformal and antiformal Pn folds and by northward lineations Ln which are evidence of shortening. The Mabille Complex can be associated with this phase. Rocks continued to be affected by deformation Dn+1, also caused by N-S compression. The shape of the folds (overturned, Z-shaped), as well as lineations Ln+1 having small angles eastward or westward, suggest that these folds are drag folds of dextral kinematics. This interpretation would be consistent with movements observed in the Eastmain-Sorbier Shear Zone located directly to the north. Earlier schistosity Sn-1 roughly N-S oriented was very rarely observed as almost all structures were transposed parallel to Sn.

Rocks of the Mabille Structural Domain have reached the upper amphibolite facies. The percentage (up to 20%) of partial melting in sedimentary rocks of the DSmab is significantly lower than in the DSayr (~50%). Metasedimentary rocks of the Laguiche Complex studied under the microscope have QZ-FP-BO ± GR ± CD ± FB assemblages. Garnet porphyroblasts are very abundant in paragneiss, while pinnitized cordierite poekiloblasts are somewhat less abundant. The presence of cordierite indicates that these rocks have undergone low-pressure metamorphism. Sillimanite, more commonly in a fibrous form (fibrolite), was observed in only two places. Orthopyroxene was observed on three paragneiss outcrops (18-LP-6097, 18-MP-5080 and 18-WM-3100) in the southern portion of the DSmab. The granulite facies was thus reached at the southern end of the domain.

Felsic intrusive rocks of the domain have an assemblage of ferromagnesian minerals with biotite and hornblende, without pyroxene. The presence of 5% garnet is noted in the Martel Suite.

The map of the vertical gradient of the total magnetic field (SIGÉOM) indicates that this domain is dominated by zones of very low magnetic susceptibility and a smooth texture. These zones correspond to sedimentary rocks of the Laguiche Complex. In the middle of the zone, a 4 km wide, E-W oriented strip has a heterogeneous texture which allows distinguishing Pn folds of regional importance. This strip corresponds to the Mabille Complex. Towards the south, the magnetic texture gradually becomes banded. The strongly positive magnetic anomaly strips correspond to mafic to ultramafic intrusions mainly oriented E-W, while more heterogeneous zones coincide with the presence of granitic material intruding into sedimentary rocks.

A sample of paragneiss derived from wacke belonging to the Laguiche Complex (16-HH-1654-A, sheet 33A10) was dated and monazite yielded a uniform age of 2692 ±6 Ma (Davis and Sutcliffe, 2018). This represents a metamorphic age and a minimum age for the deposition of sedimentary rocks. This age seems to date the metamorphic episode associated with partial melting of sedimentary rocks of the Sedimentary Complex, and could therefore date deformation phase Dn. Two samples of anatectic granite also collected from in Laguiche Complex (16-AS-6666-A, sheet 33A10 and 18-SG-7102-A﻿, sheet 33A07) yielded crystallization ages of 2674 ±5 Ma (Davis and Sutcliffe, 2018) and 2684 ±3 Ma (Davis, 2019) respectively.