Hocq (1985) identified mafic rock klippes (gabbro, hornblendite) and ultramafic horizons in the Mabille and Maville lakes area. At that time, these mafic-ultramafic horizons were part of the Base Gneissic Complex, a much larger unit interpreted as bedrock. The Mabille Complex was introduced following the Ministère’s 2018 mapping work in the Cadieux Lake area (Beauchamp, 2020). Inside the Opinaca metasedimentary basin, the Mabille Complex consists of mostly tonalitic rocks and supracrustal rock klippes. 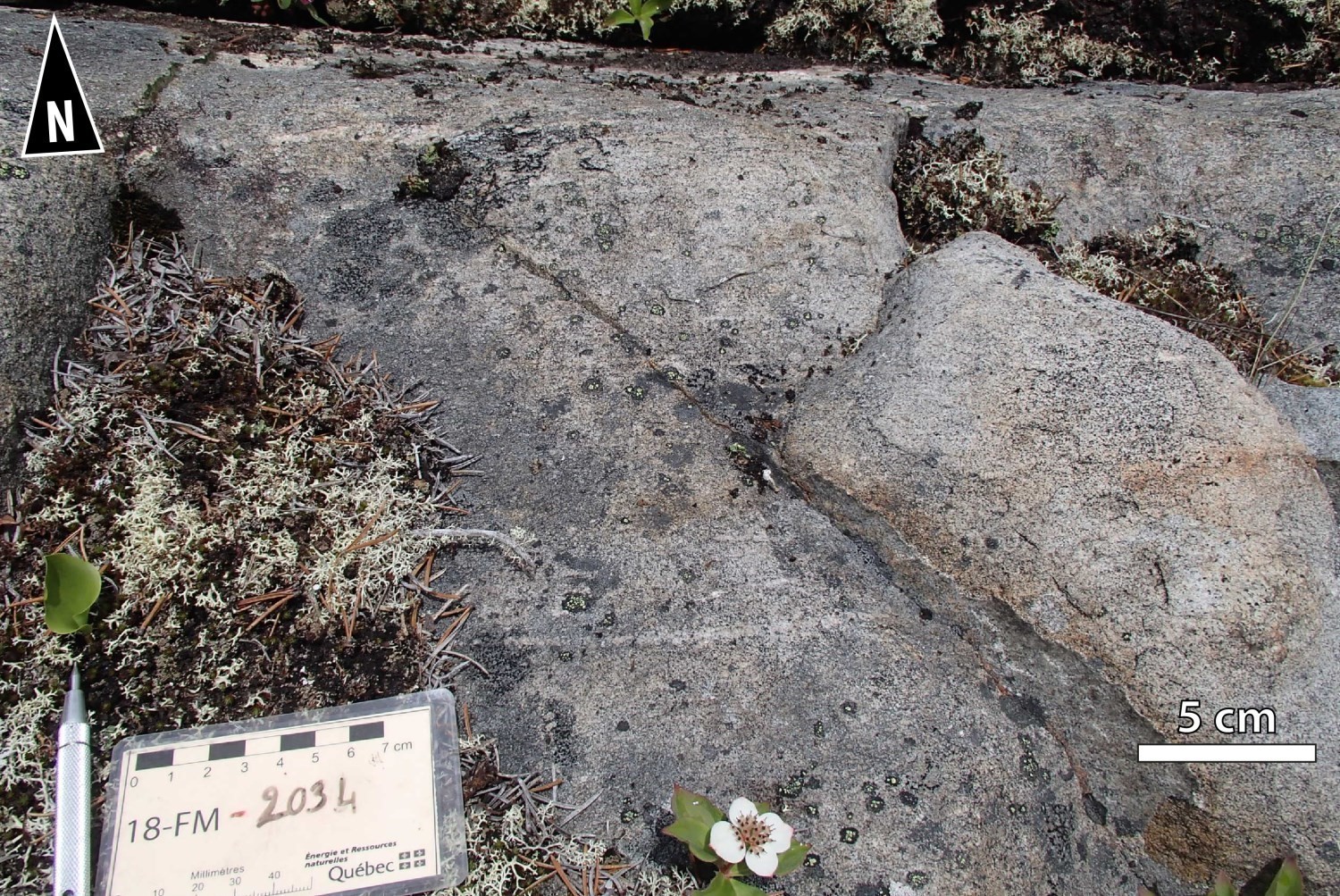 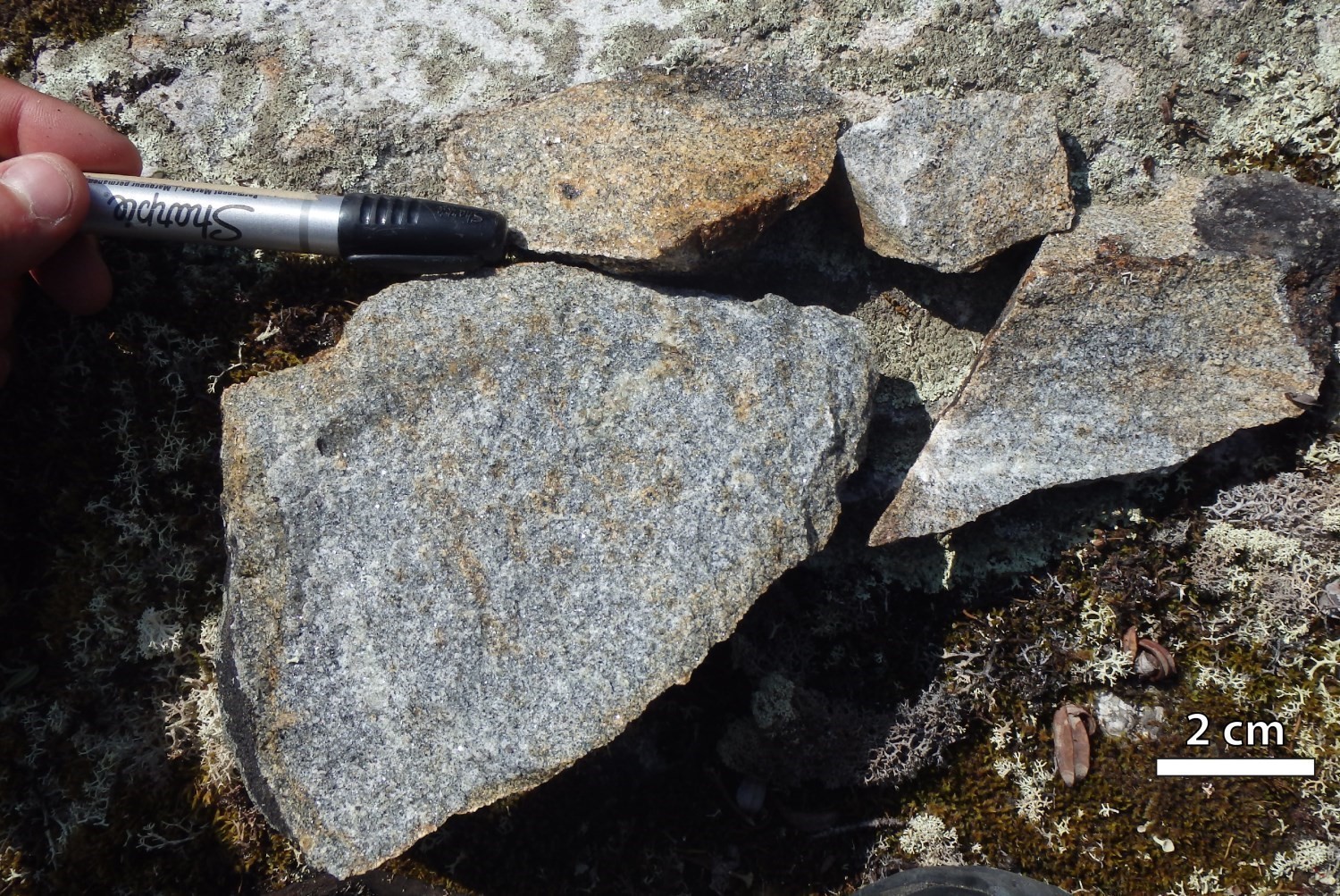 The Mabille Complex consists mainly of a unit of homogeneous biotite ± magnetite tonalite and quartz diorite (nAmbi1). It includes up to 10% centimetric to metric intrusions of white granite that are more or less continuous, boudinaged and commonly subconformable to foliation. In addition, later granite sharply cuts the tonalite fabric. A few paragneiss hummocks that appear to belong to the Laguiche Complex outcrop within unit nAmbi1.

Geochemical data (Beauchamp, 2020) of the Cadieux Lake project indicate that homogeneous tonalites of the Mabille Complex are magnesian granitoids, generally calcic (Frost et al., 2001) and type I peraluminous (Maniar and Piccoli, 1989). Normalized to CI chondrite (Palme and O’Neill, 2004), these rocks have a pattern enriched in light rare earths. They exhibit negative anomalies in Nb, P, Sm, and Ti, as well as positive anomalies in Ta, La-Ce, Nd, and Zr-Hf compared to the primitive mantle (McDonough and Sun, 1995). 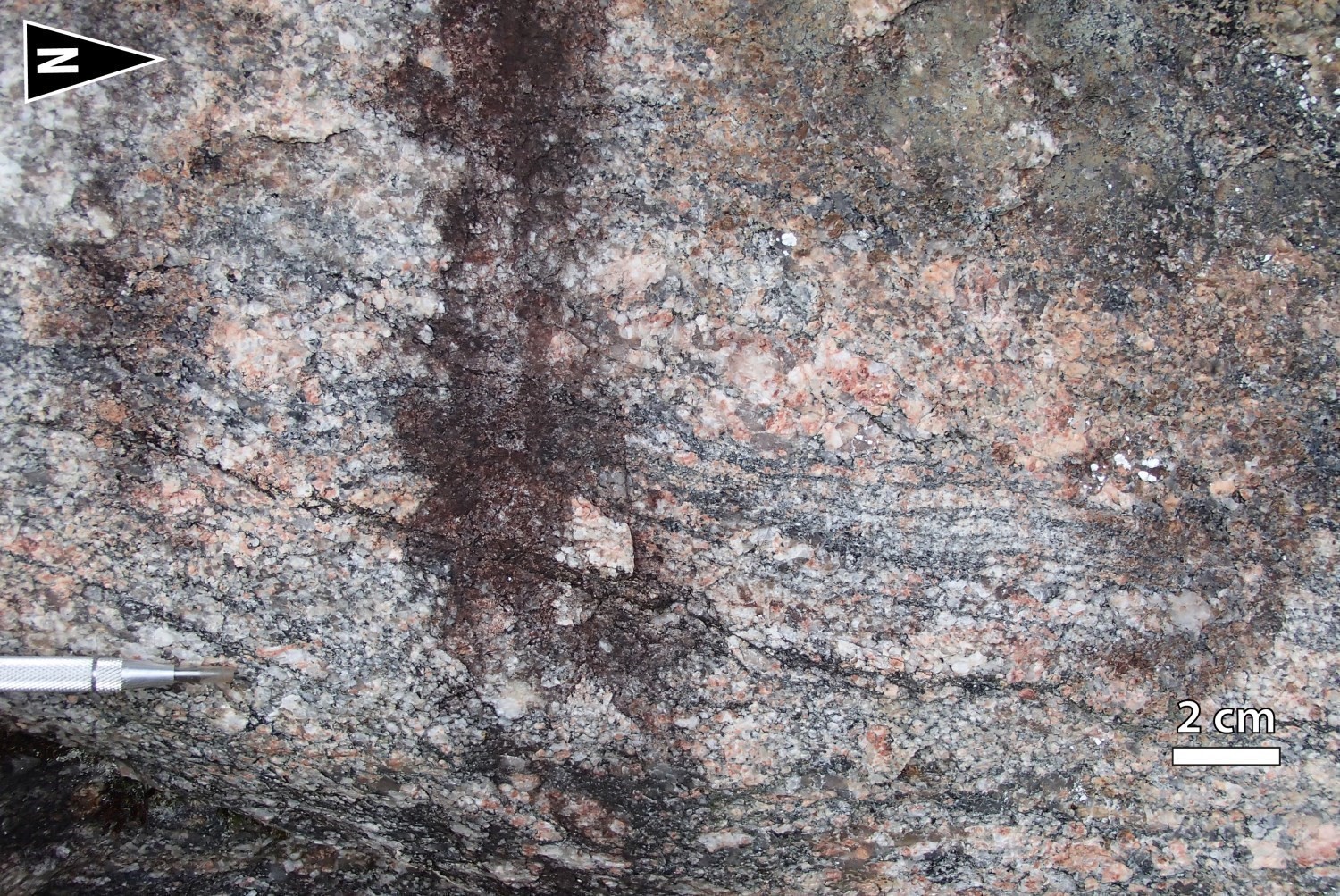 Few outcrops are present on magnetic highs attributed to unit nAmbi2. The following description is based solely on five observation sites (outcrops 18-PG-4124, 18-MP-5065, 18-LP-6062, 18-LP-6172 and 18-LP-6173). Several geological zones were interpolated and interpreted using the aeromagnetic map. Unit nAmbi2 varies in composition from granitic to granodioritic. The rock is heterogeneous and pinkish-white in altered patina and fresh exposure. It seems to have assimilated a variety of materials: tonalite, quartz diorite and paragneiss restites, as well as biotite-magnetite schlierens. These remnants of digested enclaves give a banded and marbled appearance to the rock. The distribution of ferromagnesian minerals is irregular. Generally, more biotite (3%) is observed than hornblende (trace-1%). Millimetric to centimetric magnetite, chlorite and epidote are also present in minor proportions. 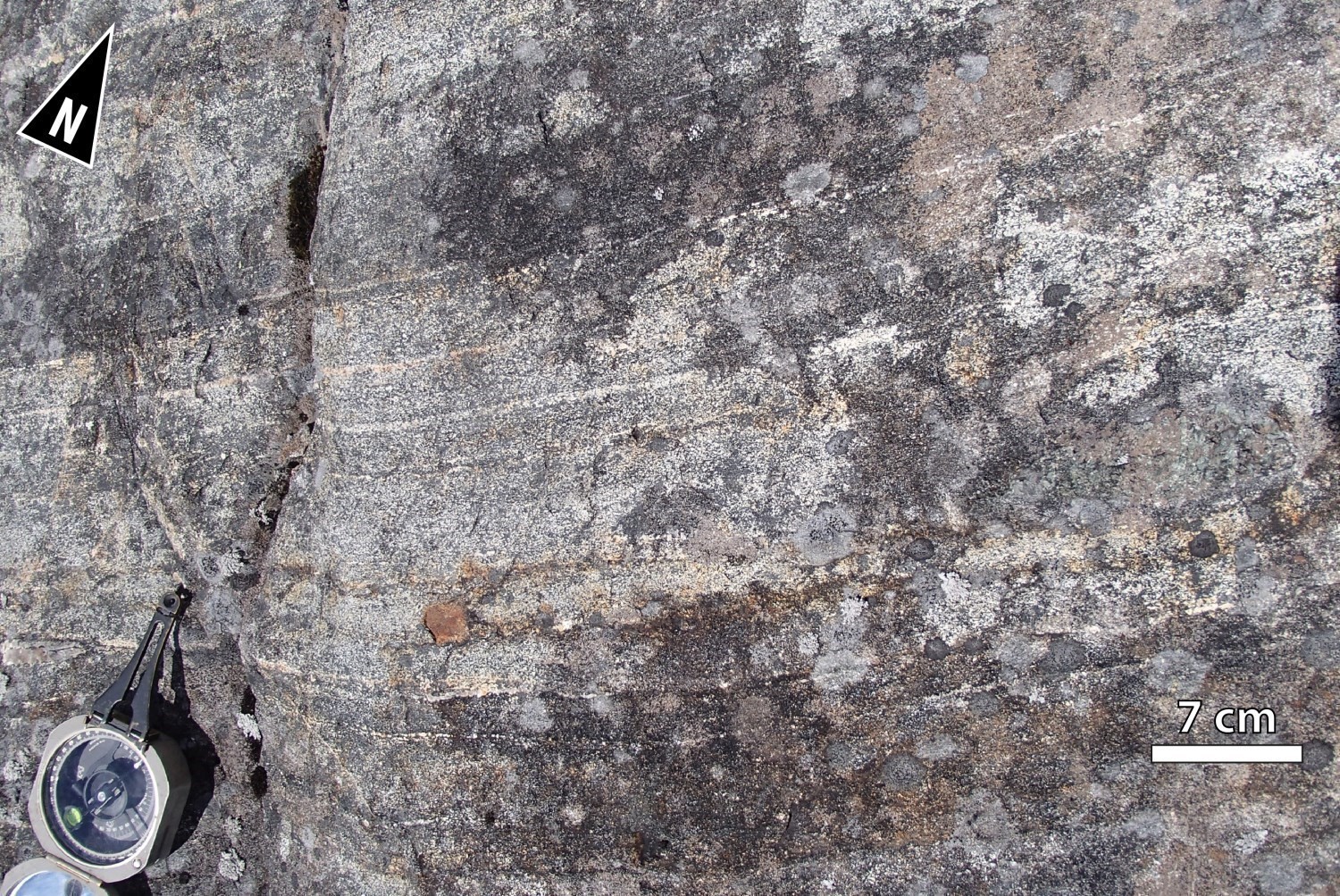 The number of outcrops observed on magnetic highs attributed to unit nAmbi3 is very limited. The following description is based on three observation sites (outcrops 18-FM-2042, 18-LP-6061 and 18-AH-8066) and compilation outcrops described by Hocq (1985). Unit nAmbi3 consists of foliated, amphibolitized and granoblastic gabbro and diorite containing hornblende ± magnetite ± biotite. Actinolite, sphene and epidote are also observed in lesser amounts. The presence of thin layers of leucosome (<5%) suggests a low degree of in situ partial melting. Banding is created by compositional variations. The content of ferromagnesian minerals allows for the differentiation between mesocratic and melanocratic bands in the rock. 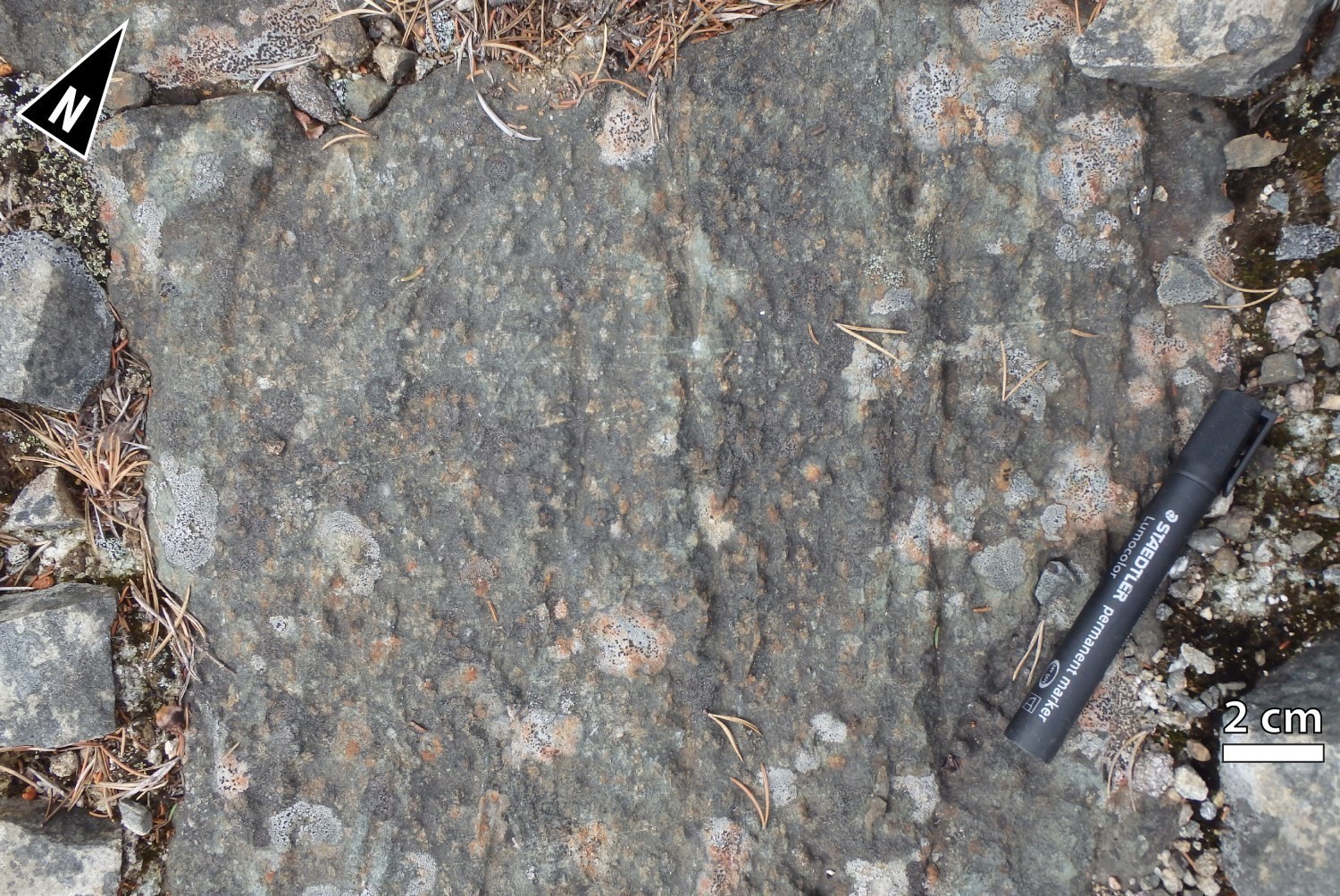 Unit nAmbi4 consists of ultramafic intrusions characterized by high magnetic susceptibility. These bodies are elongated, lenticular and spatially associated with amphibolitized basalt (unit nAmbi5). Ultramafic rock outcrops are usually in positive relief and characterized by a brownish to greenish-black patina. The most documented facies is foliated peridotite exhibiting a cumulate texture that shows black nodules (protuberances) or rounded millimetric hollows on the surface. Olive cumulates are completely replaced by serpentine and magnetite. In thin section, rocks of the nAmbi4 unit are mostly composed of acicular amphibole of the actinolite-tremolite series and pyroxene remains. Antophyllite, if present, forms colourless rods that cut the main foliation. Rocks enriched in K2O contain phlogopite flakes. Serpentine and magnetite veinlets cut the rock in several directions. Traces of magnesium chlorite and spinel (green and brown) are present. Less common, pyroxenite layers are distinguished by their apple-green alteration patina. These rocks contain actinolite, pyroxene and phlogopite.

Based on geochemical data (Beauchamp, 2020), the normative composition of peridotite is defined as lherzolite with a MgO content ranging from 62.95% to 71.34%. It shows flat rare earth profiles and a small negative P anomaly on the spider diagram. 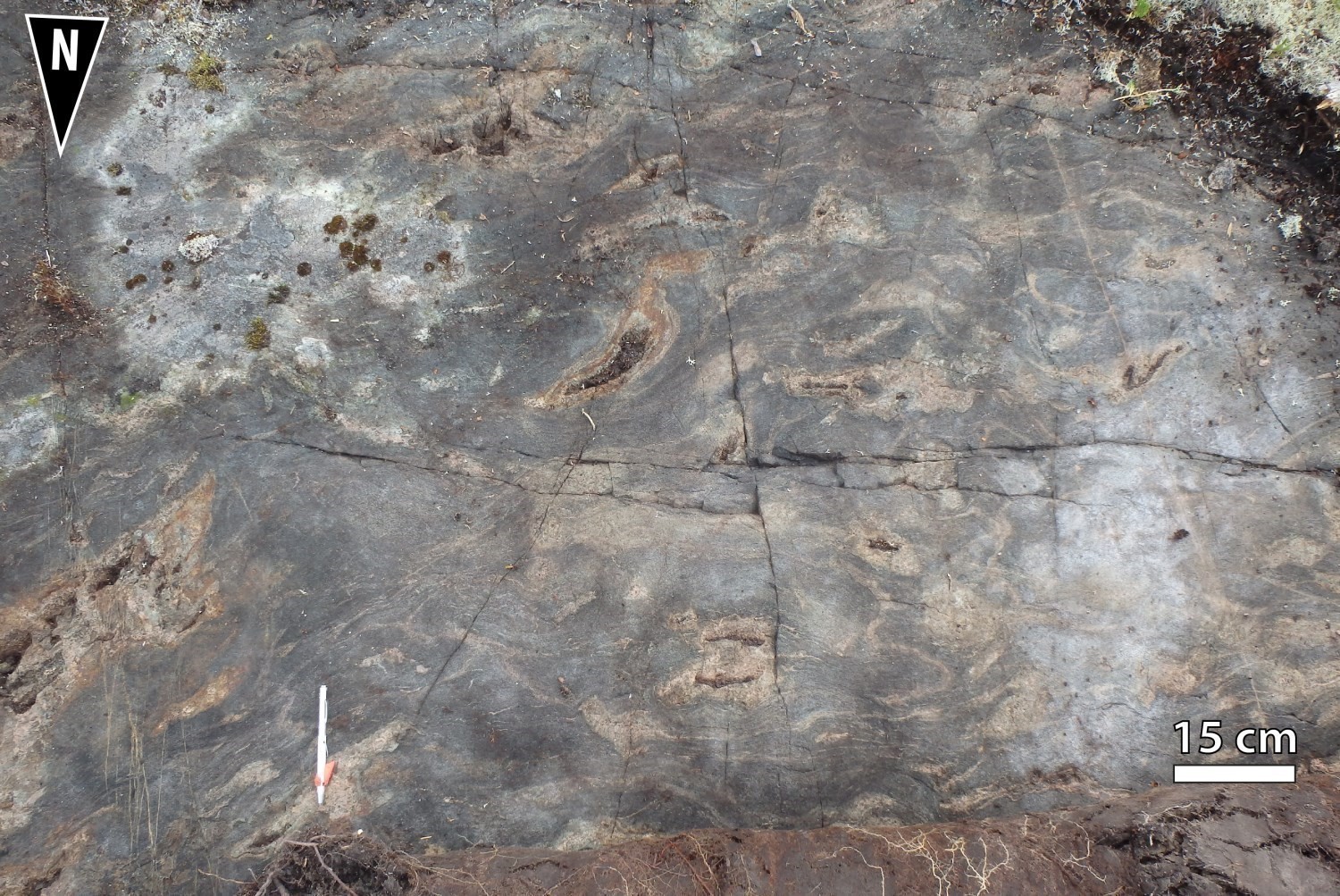 From a geochemical point of view (Beauchamp, 2020), mafic rocks of the Mabille Complex are subalkaline basalt and tholeiitic andesitic basalt (Winchester and Floyd, 1977; Pearce, 1996; Ross and Bédard, 2009) similar to N-MORB. These rocks, thought to have been formed in an island arc-like setting (Pearce and Norry, 1979; Meschede, 1986), are believed to have originated from a source that has undergone minor crustal contamination (Pearce, 2008). Unit nAmbi5 is characterized by flat rare earth profiles and the presence of small negative Ta and P anomalies on spider diagrams.

The Mabille Complex appears as a wide E-W strip that crosses sheet 33A02 over a distance of >40 km in the Mabille and Sorbier lakes area. The maximum width of this complex is 4.5 km in the central portion of the sheet. It gradually wedges out eastward and westward in sheets 33A01 and 33A03, respectively. 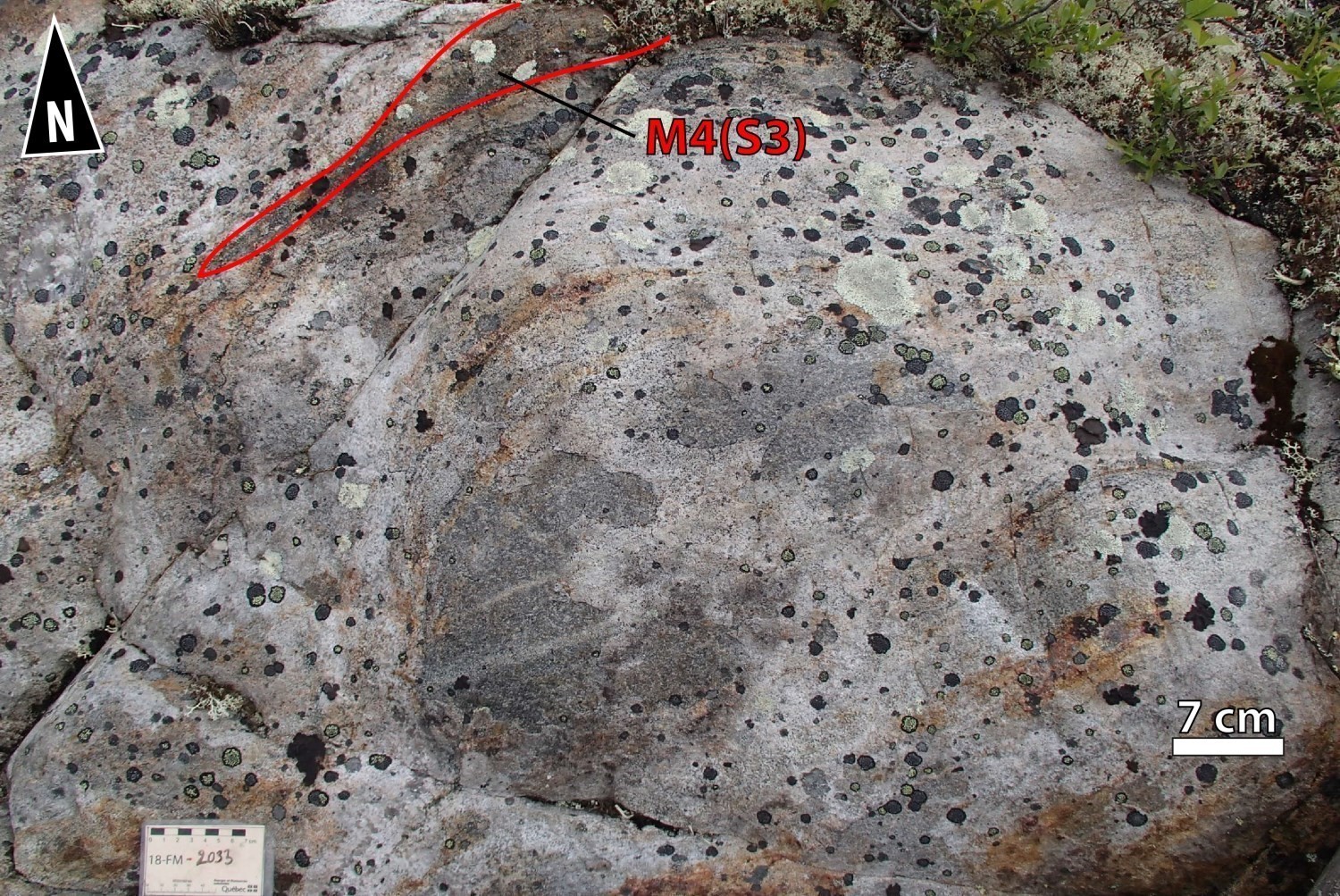