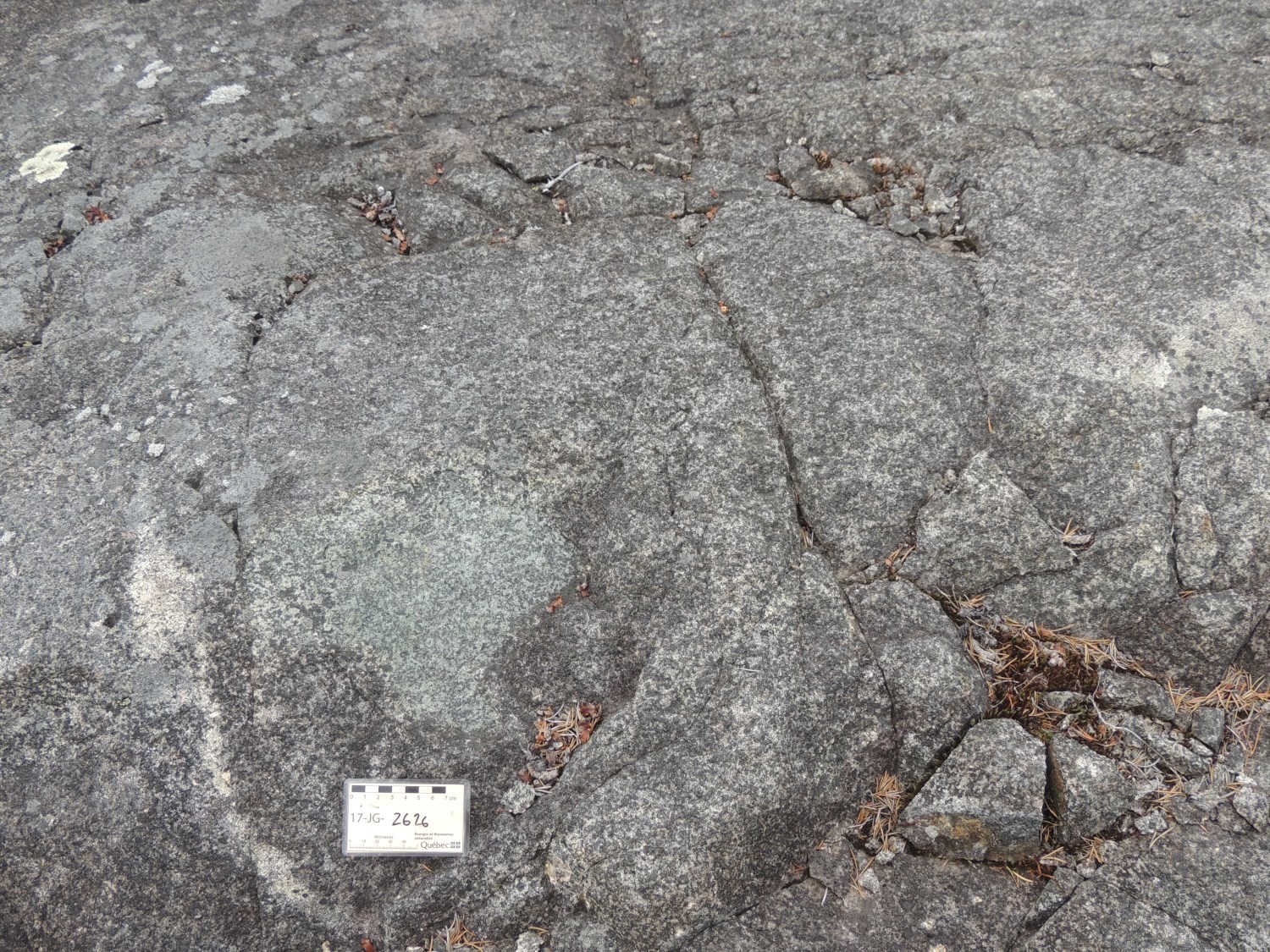 The presence of diabase dykes in the Mistassini Lake area was mentioned in the initial works of Neilson (1950), Riley and Kindle (1958) and Chown and Caty (1973). They recognize the extent of these dykes from the area northeast of Troilus Lake to Mistassini Lake and the absence of these dykes in sedimentary rocks of the Chibougamau Formation and Mistassini Group. The dyke swarm is referred to as the Mistassini swarm by Fahrig et al. (1986) who attribute it a Paleoproterozoic or Mesoproterozoic age. U-Pb isotopic ages on baddeleyites (see dating table) indicate that this swarm is of Neoarchean age. As a result of these datations, the stratigraphic label of this unit was modified from Pmib to nAmib and the unit is referred to as the Mistassini Dyke Swarm. During regional mapping of the Middle North program during the 1990s, a joint project of Géologie Québec, the Geological Survey of Canada and the Jack Satterly Geochronology Laboratory was undertaken to sample diabase dykes of the Yasinski Lake region (NTS sheets 33F) and the western half of sheet 33G. The purpose of this project was to determine the paleomagnetic signature of these intrusions and to characterize their petrography, geochemistry and age. The known swarm extensions were recognized further north (Mistassini and Matachewan dyke swarms, Senneterre Dykes, Buchan et al., 2007) and further south (Lac Esprit Dykes, Buchan et al., 2007). Fahrig et al. (1986) dykes 7602 and 6547, formerly associated with the Mistassini Dyke Swarm, are now assigned to Lac Esprit Dykes based on geochemical data.

Unit nAmib represents the generic name for NNW-SSE to N-S straight-line dykes, present on older maps but without complete description or geochemical data, which could not be assigned to one of the three Mistassini Dyke Swarm subdivisions. Some of these dykes may belong to families of Paleoproterozoic dykes. 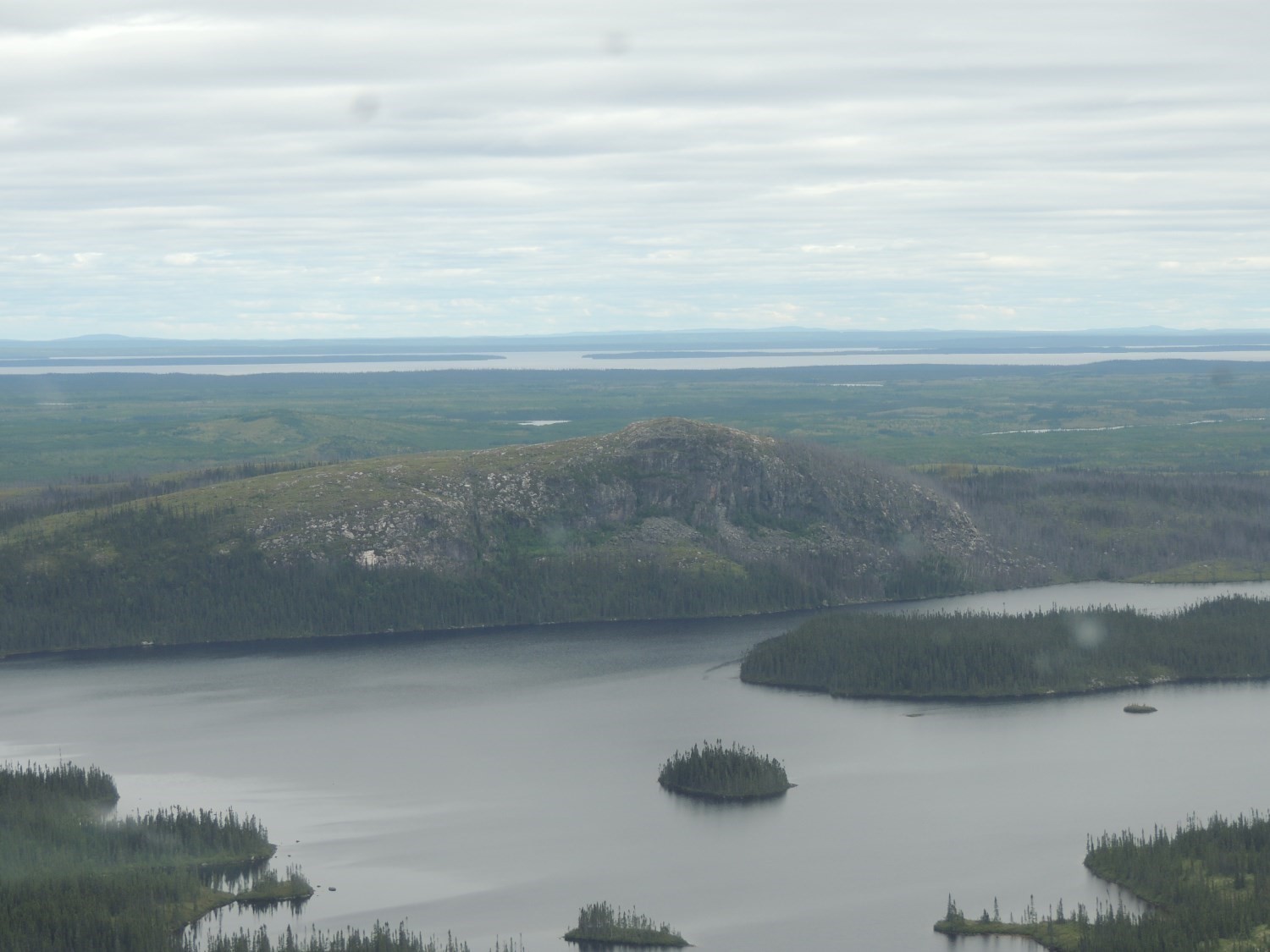 Unit nAmib1 is a package of near-vertical, NNW-SSE to N-S oriented mafic intrusions of gabbronoritic composition. These dykes are traced from outcrops, aerial photos, satellite images, magnetic field vertical gradient map, petrography and geochemistry. They are distinguished from other mafic intrusions of the same type by their orientation and petrographic, paleomagnetic and geochemical characteristics. Mistassini dykes are characterized by a high magnetic susceptibility highlighted by positive linear aeromagnetic anomalies (NW-SE) that can be tracked over kilometric distances (interactive map). Near Mistassini Lake, these dykes are uncommon, but farther north they form large ridges. 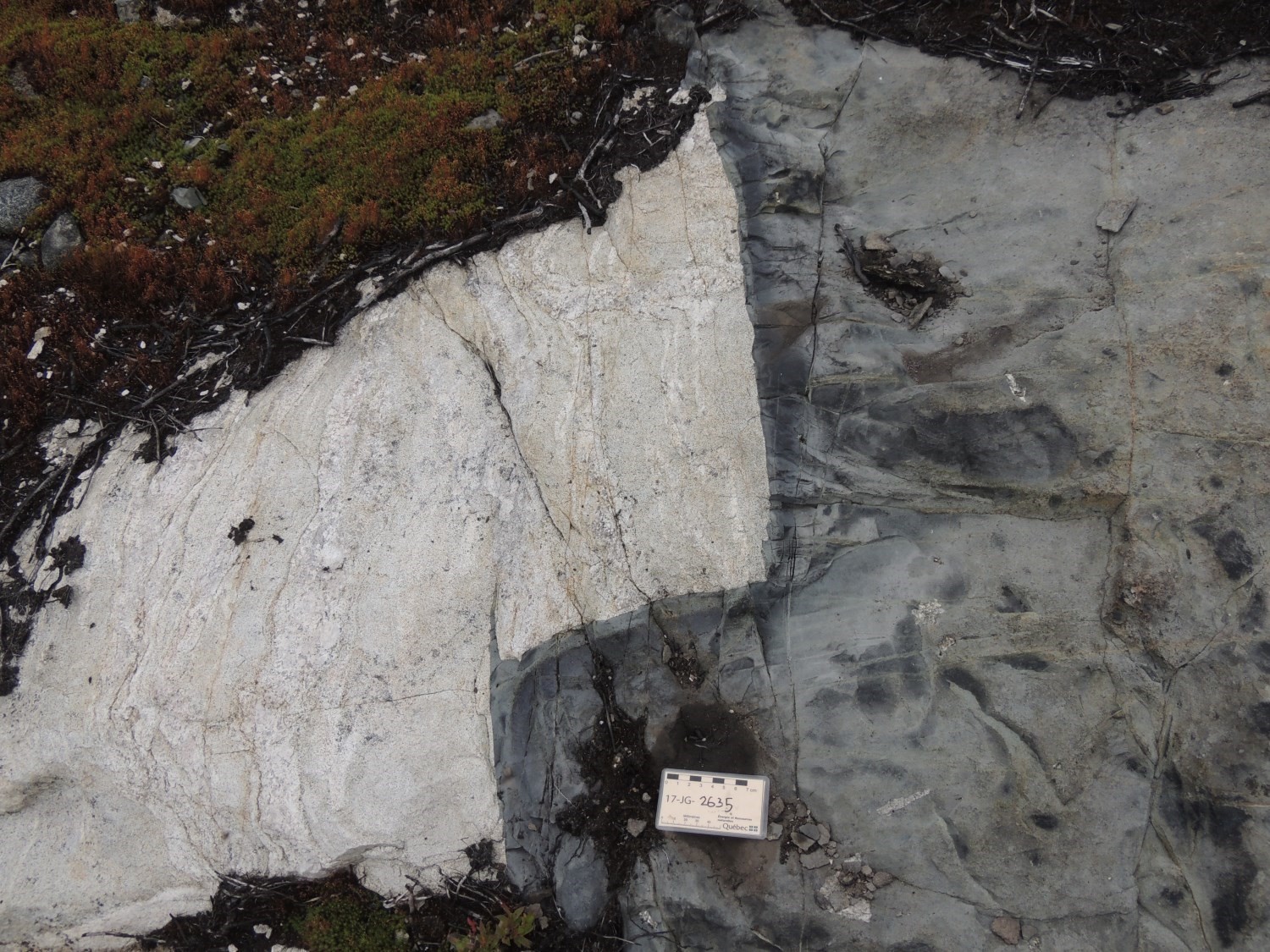 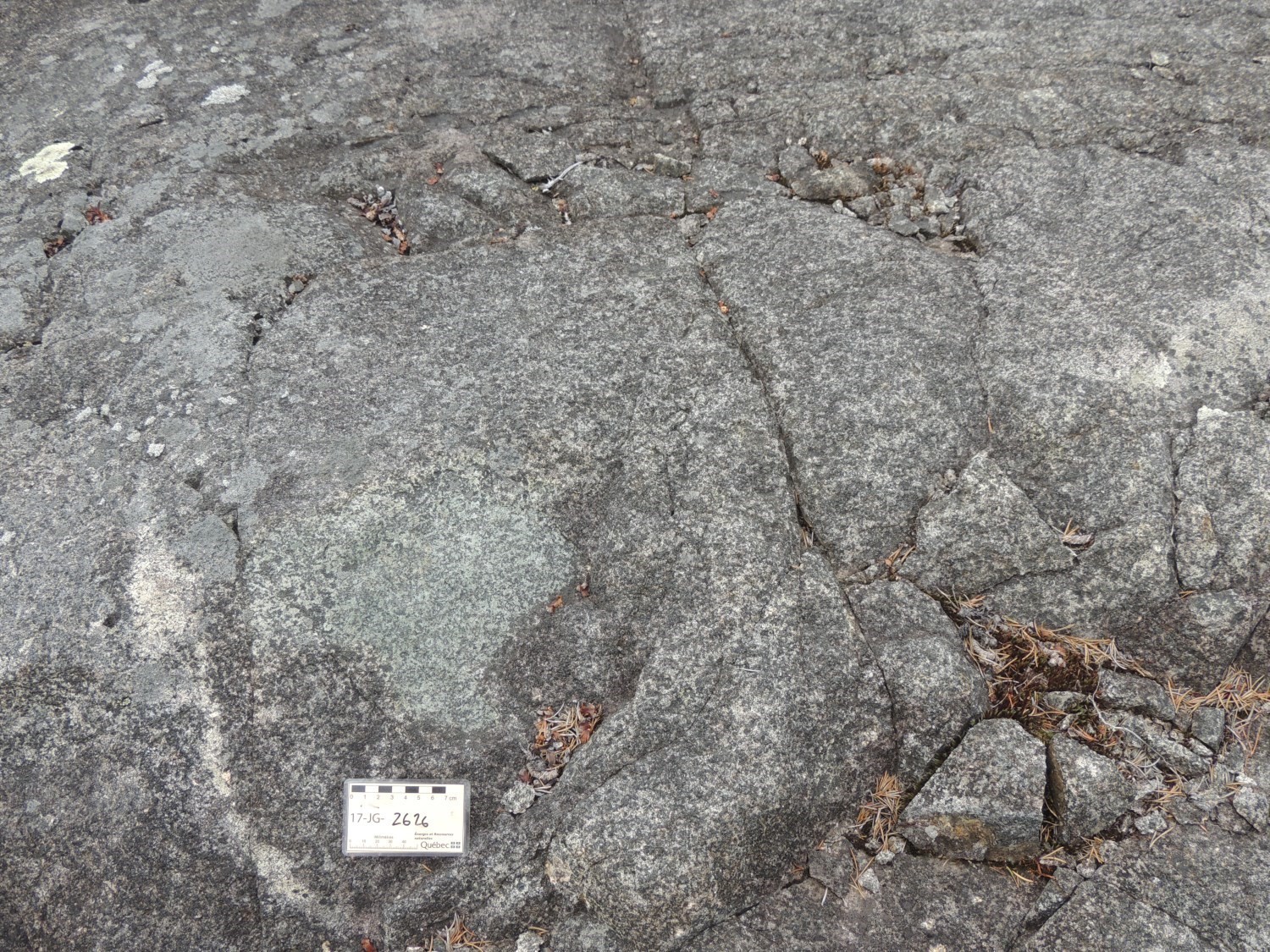 The dykes vary in thickness from 0.5 to 100 m and have a chill margin a few centimetres thick in direct contact with the host rocks. The colour is gray to dark green in fresh exposure and grey to brown in altered surface. Locally, the rock is highly hematitized and has a reddish stain (Goutier et al., 2001, Photo 9). The diabase is massive, homogeneous, magnetic and weakly deformed. Fracture networks are observed with local filling of quartz, carbonate or barite-hematite. The center of the dykes is typically medium-grained, with an equignanular to heterogranular structure, locally subophitic to ophitic (nAmib1). These dykes are mainly composed of plagioclase prisms partially to strongly altered in very fine-grained white mica (damourite), weakly or partially uralitized augite and orthopyroxene pseudomorphs replaced by an assemblage of chlorite, acicular amphibole and talc. Biotite and ilmenite-magnetite are also observed. In thin section, orthoclase and quartz (microgranophyric texture) associated with rutile and thin rods of apatite form interstitial areas with large crystals of plagioclase and pyroxene. Epidote and carbonates are also present in accessory quantities. Orthoclase also forms rims around plagioclase prisms (Fahrig et al., 1986; Gigon and Goutier, 2017). Particular geochemistry, presence of biotite, K-feldspar, quartz and abundance of apatite are distinctive characteristics of the Mistassini Dyke Swarm. Excluding K-feldspar, these dykes are gabbronoritic in composition. Mistassini dykes are characterized by TiO2+K2O+P2O5 contents generally greater than 5 wt.% and average ratios Fe2O3v/Feo = 0.4, Zr/Y>8 and La/Yb>4.5. 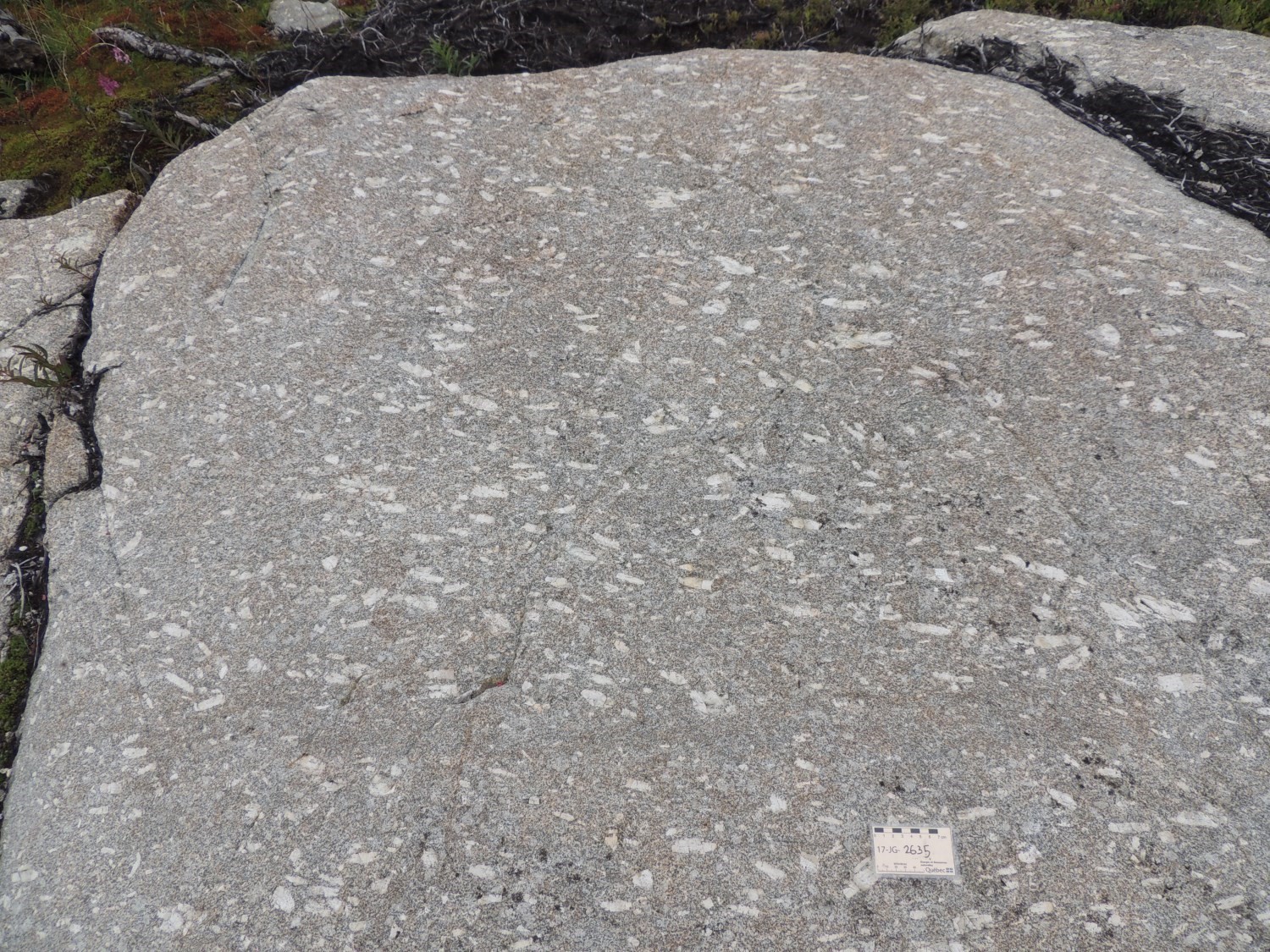 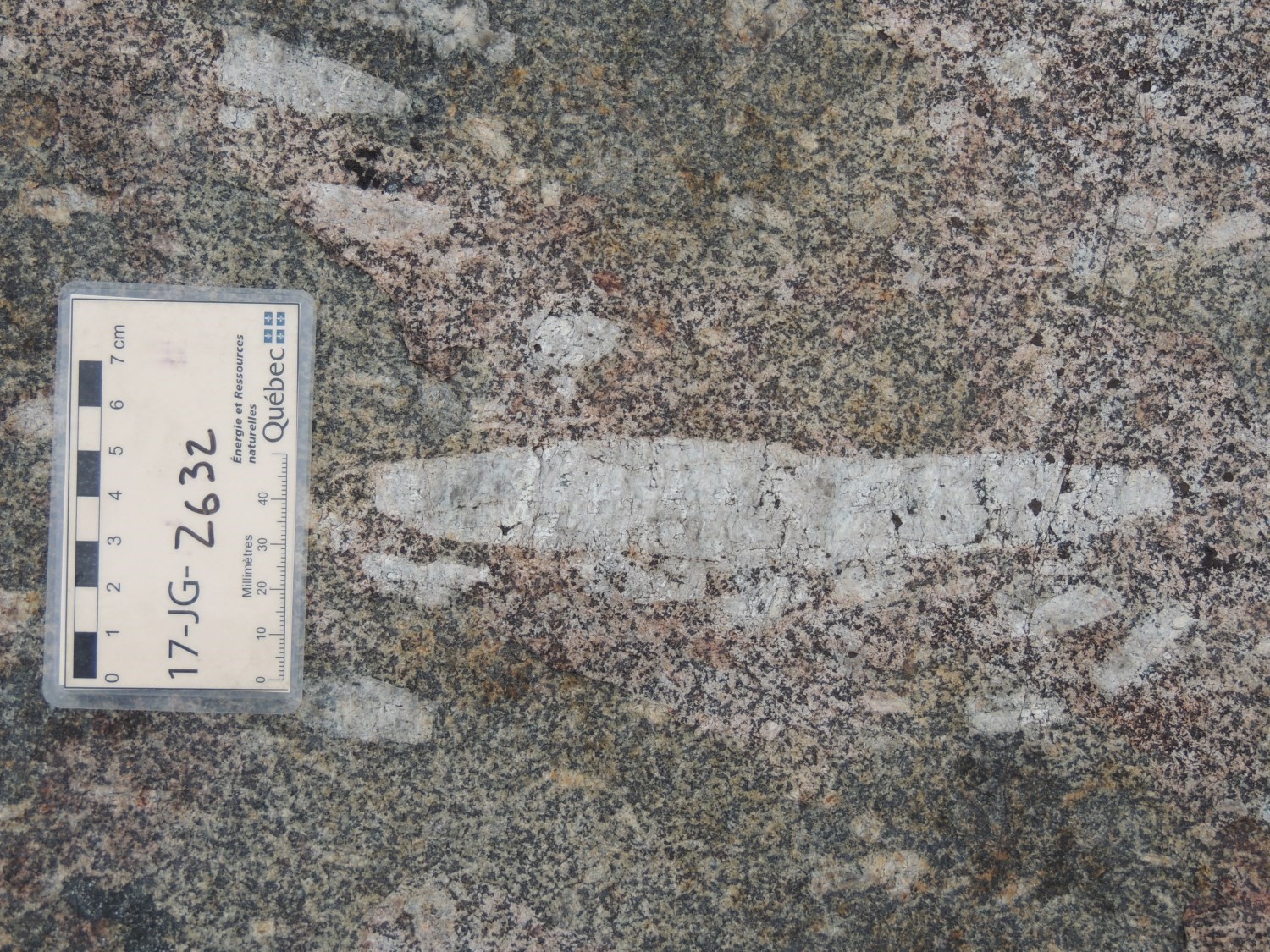 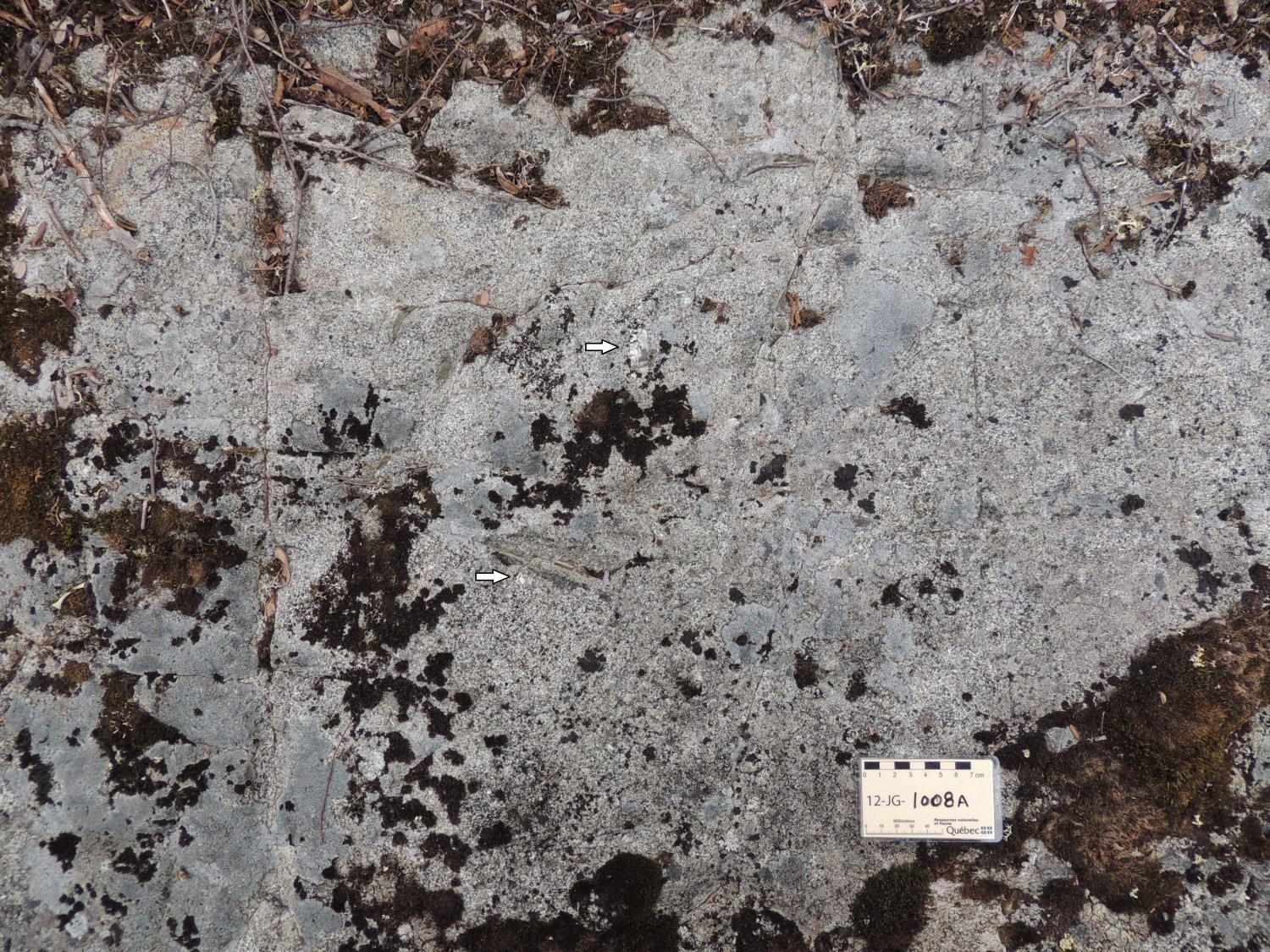 The diabase dykes of subunit nAmib1a are distinguished from unit nAmib1 by their porphyritic texture with plagioclase phenocrystals. In the Mistassini Lake area, these phenocrystals are abundant (up to 15% in the centre of a dyke), 1-19 cm long and have a trachytic texture. On contact and at the edges of the dykes, centimetric crystals are usually absent or few in number. Further north, phenocrystals are less abundant and smaller, such as in the Robert-Bourassa Reservoir area (e.g., 1999-JG-1190, 7%, 1-8 cm) or Pelletan Lake (e.g., 2012-JG-1008, <1%, 0.5-3 cm). 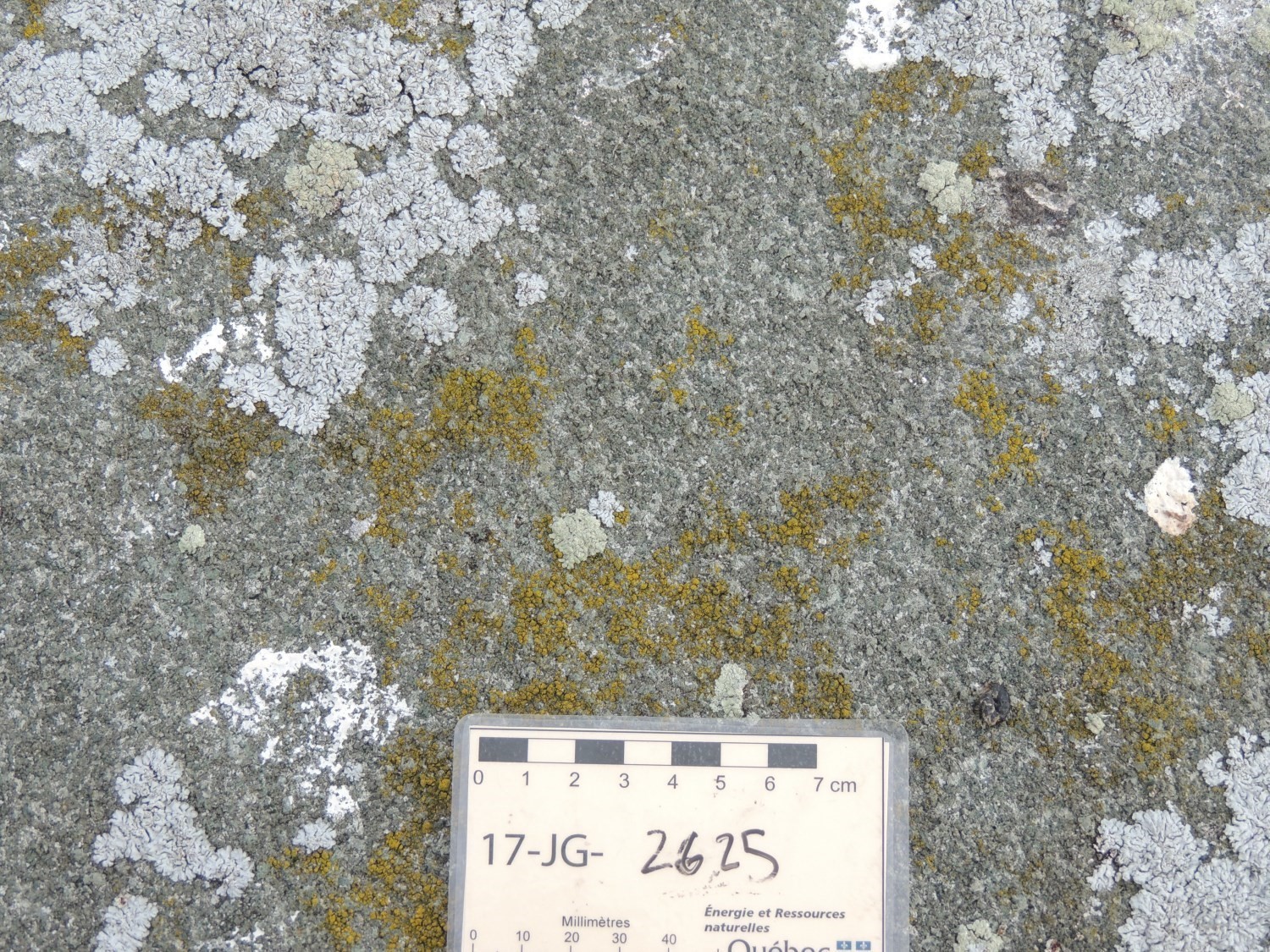 The nAmib2 diabase dykes are most abundant in the Mistassini Lake area, where they were recognized by Chown and Caty (1973). They referred to them as unit 12c (uralitic gabbro). According to Fahrig et al. (1986), the most magnetic dykes are strongly altered and primary minerals are not preserved; it would be peridotite and pyroxenite. Olivine is completely replaced by serpentine and magnetite, while pyroxenes are uralitized. Phlogopite was observed in a metapyroxenite. Mg-rich dykes (7-17% MgO) would be olivine gabbronorites. The coarser dykes have a similar appearance to that of unit nAmib1, with a high proportion of mafic minerals. The latter are composed of plagioclase prisms, pyroxene and olivine (5-10%) forming a subophitic to ophitic texture. Plagioclase is saussuritized, pyroxenes are partly uralitized, and olivine is replaced by an assemblage of serpentine, talc and amphibole. Apatite and magnetite account for almost 5% of the rock. Magnetite grains are surrounded by fine-grained biotite and leucoxene. The immobile trace element ratios (Zr/Y, La/Yb) of the magnetic dykes are comparable to those of units nAmib1 and nAmib1a, supporting their assignment to this swarm.

The Mistassini Dyke Swarm consists of many NW-SE to N-S oriented dykes, which are almost vertical and extend from Mistassini Lake for a few kilometres to more than 375 km. They are distributed over an area of approximately 300,000 km2, forming a range that converges to a point 150 km southeast of Mistassini Lake. Dykes ranging in thickness from 1 m to 133 m are locally nearly continuous for up to 375 km (interactive map). Dykes in unit nAmib2 are narrower (<10 m) and have a smaller extension (<15 km near Mistassini Lake and about 80 km in sheets 23E03 to 23D06). They are present on maps of the Wabisinane River area (unit 12c of Chown and Caty, 1973).