The Ayr Structural Domain was defined by Beauchamp (2019) following a mapping survey conducted in the Cadieux Lake area in the summer of 2018. The following description is based primarily on geological observations collected by Beauchamp (2019), as well as on the analysis of aeromagnetic survey maps (total magnetic field and vertical gradient) from the SIGÉOM.

The morphology of the Ayr Structural Domain (DSayr) remains undetermined, as the extent of this domain is only known in NTS sheets 33A02, 33A03 and 33A07. To the south, the DSayr is in contact with the Cadieux Structural Domain and the Eastmain-Sorbier Shear Zone.

Stratigraphic units that compose the DSayr are: 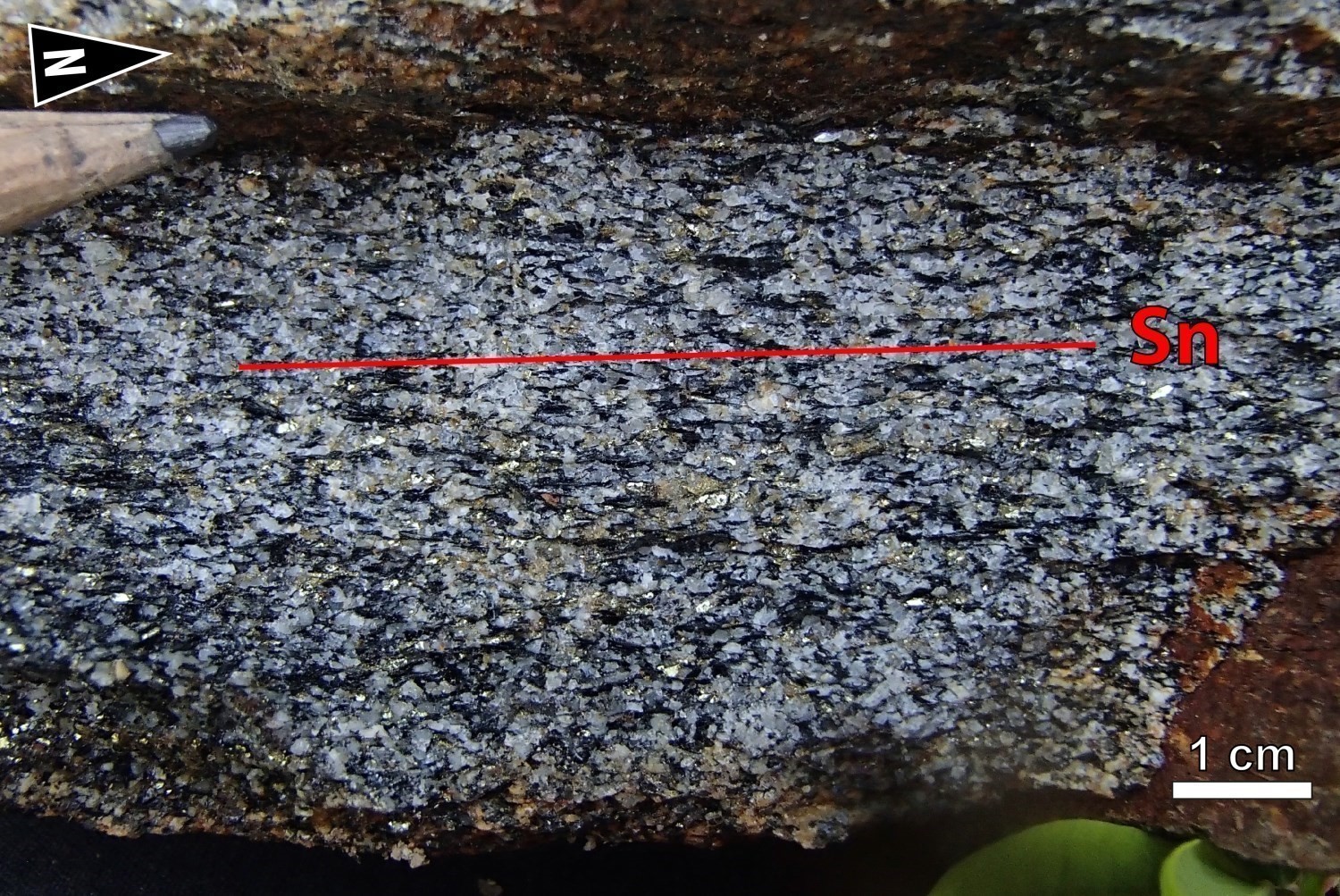 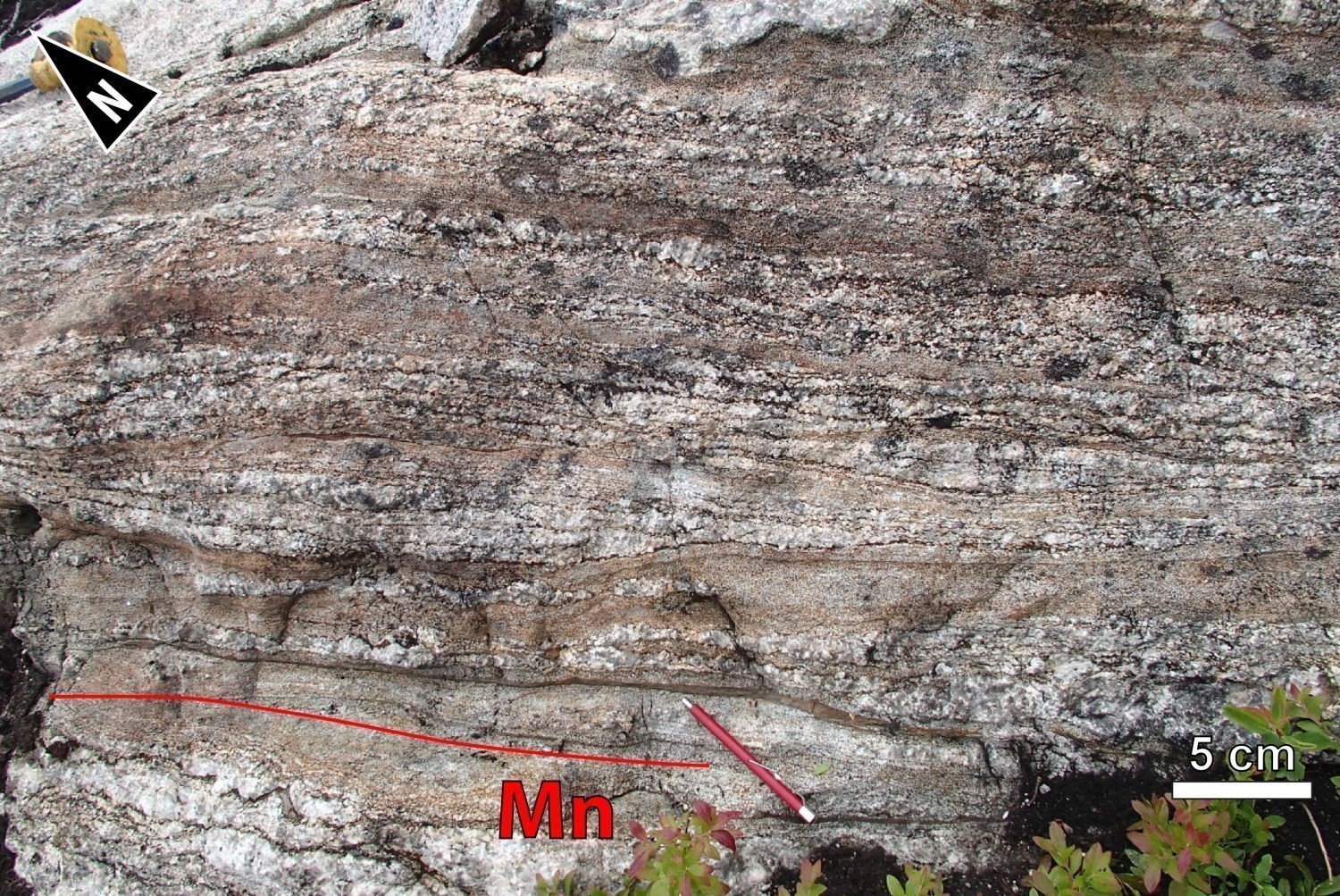 The main fabrics recognized within the DSayr are tectonometamorphic foliation Sn and migmatitic banding Mn. The preferential orientation of euhedral to subhedral biotite flakes emphasizes foliation Sn in granoblastic paragneiss. Where migmatitic banding is stromatic, mobilisate strips are subparallel to the main foliation Sn. In some diatexites, rafts and schollens are consistently oriented with the trace of regional foliation. At the domain scale, regional foliation Sn is folded. Foliation poles all line up in a great circle oriented NNE, suggesting that it is folded. 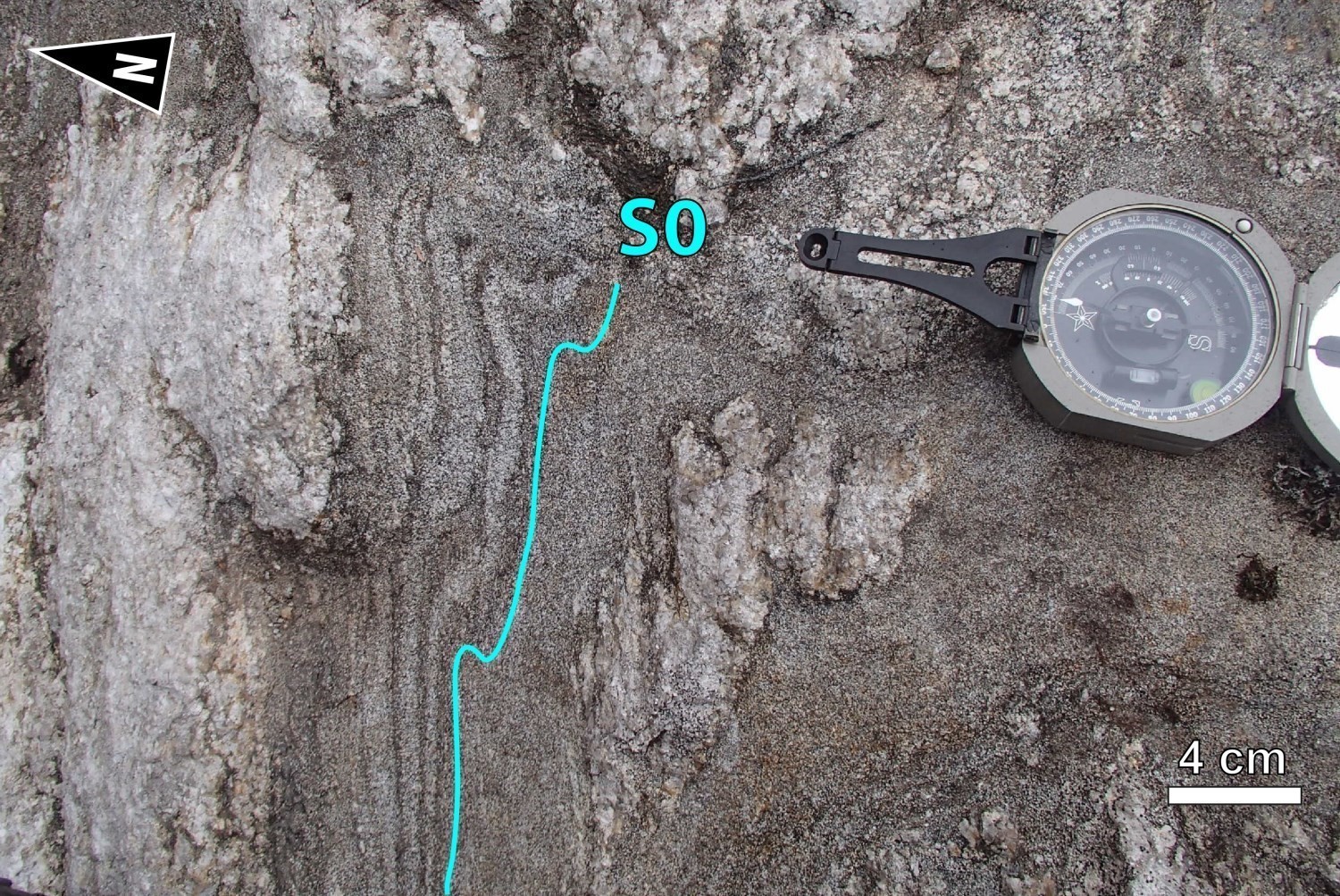 Stratification (S0), which now corresponds to compositional banding, is observed on some sedimentary rock outcrops of the Laguiche Complex (outcrops 18-FM-2092 and 18-LP-6143). Compositional banding is caused by alternating bands richer in biotite, which were originally more argillaceous, and bands poorer in biotite, which corresponded to sandstone beds. It is commonly folded and generally oriented NNW-SSE. Locally, the difference in the apparent melting rate within the same outcrop can be explained, among other things, by the presence of compositional banding. The most fertile layers have been completely melted (diatexite and anatectic granite), while the less fertile layers are less melted (paragneiss and metatexite). 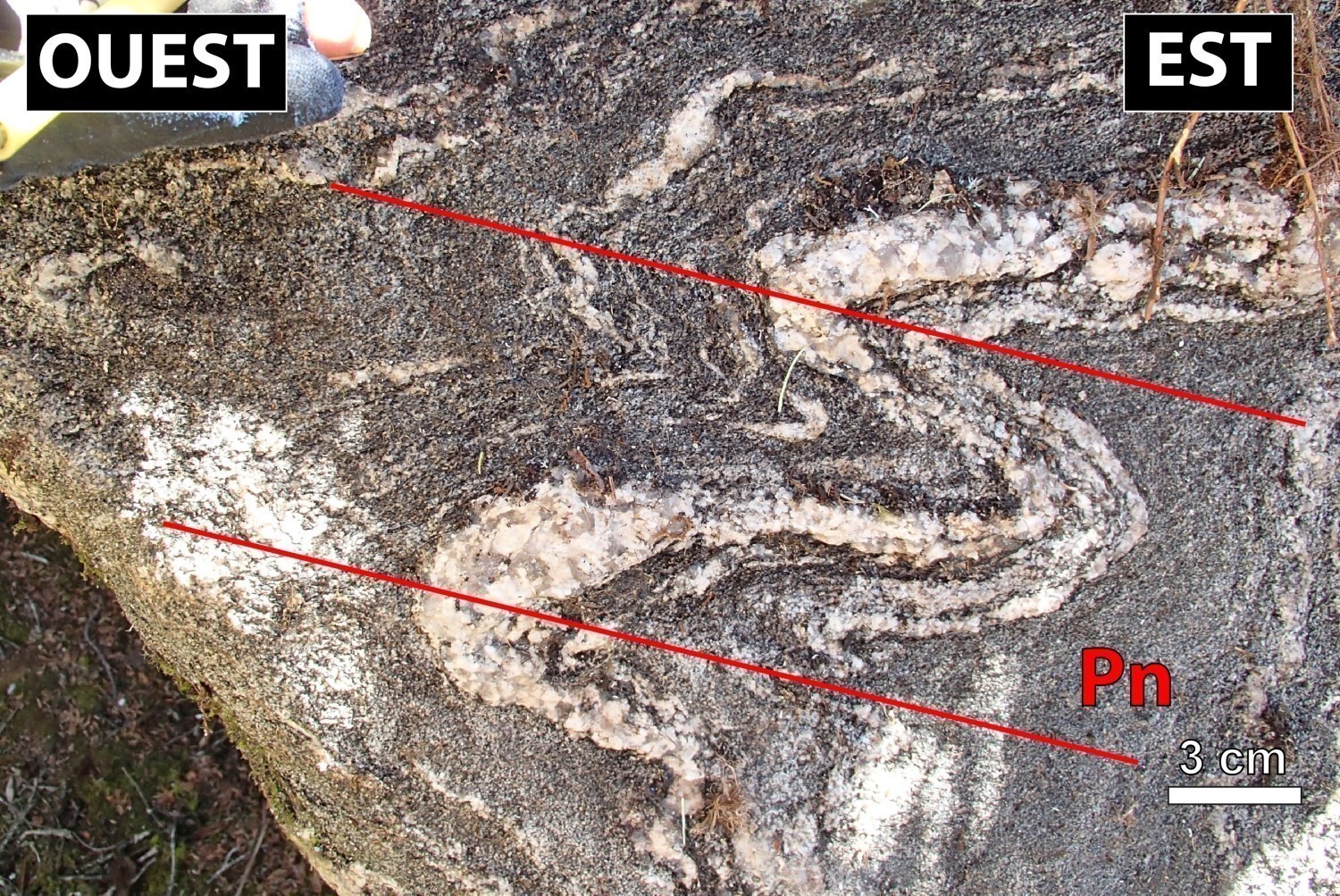 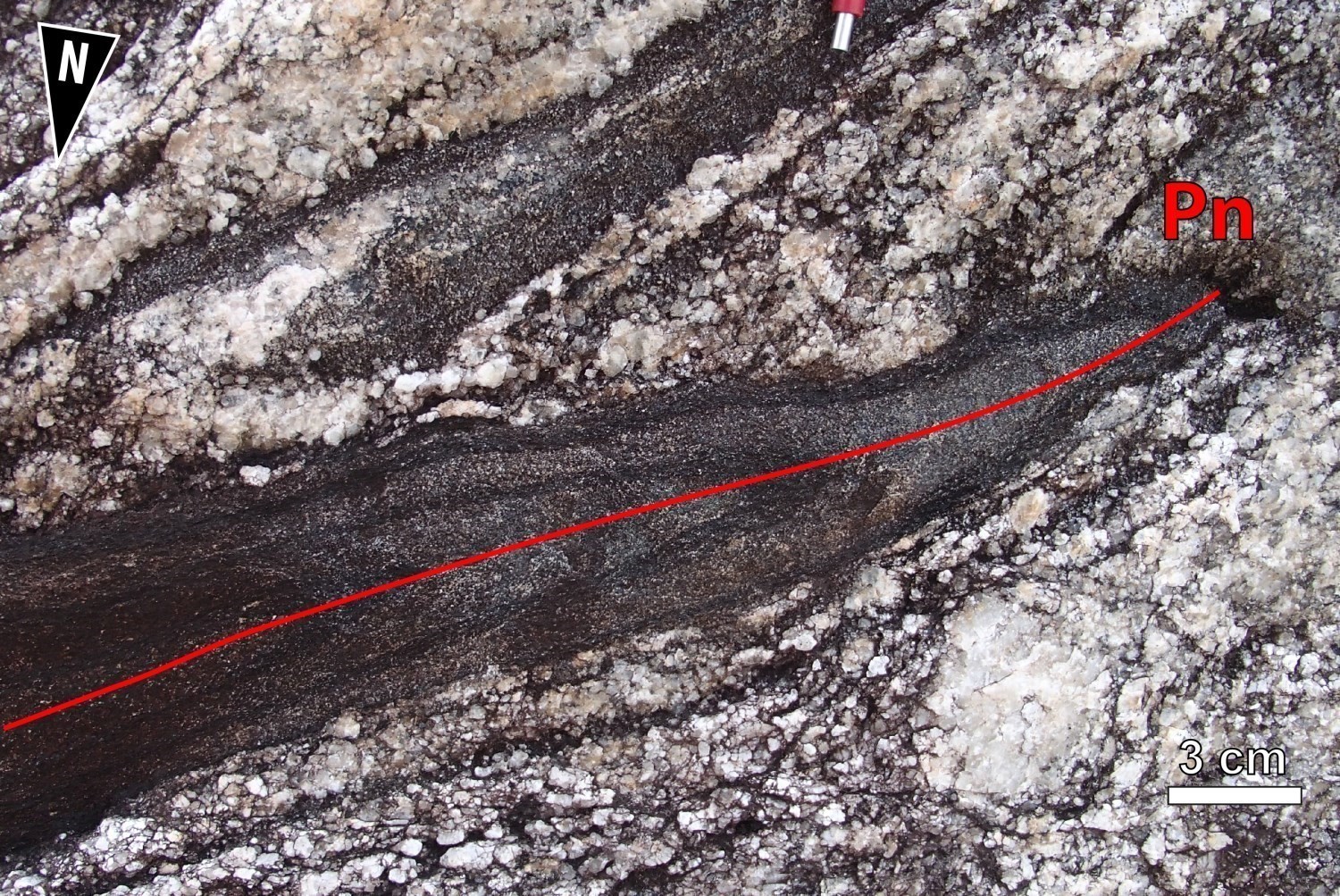 Folding in the Ayr Structural Domain has a very chaotic style and attitude that is difficult to interpret (migmatization texture and ptygmatitic folding). Some remains of tight to isoclinal Pn tectonic folds with axial planes oriented ENE-WSW are preserved in the least melted parts of the metasedimentary sequence of the Laguiche Complex (outcrops 18-MP-5048, 18-LP-6014, 18-LP-6046 and 18-LP-6144). The earliest mobilisate phases in the tectonometamorphic history are affected by Pn folding. The axial plane fabric is commonly obliterated by extensive metamorphic recrystallization. Some Z-shaped drag folds suggest apparent dextral movements.

The Lac Lavalette Synform is the most documented structure in the study area (Hocq, 1985 and Beauchamp, 2019). This structure is particularly visible on satellite imagery maps (Rapid Eye). The fold’s nose is exposed north of the confluence of the Eastmain River and Kaachiistiseshich River. The Lac Lavalette Synform is slightly overturned southward and its axis dips slightly to moderately towards the ENE.

The theoretical fold axis calculated for folds of this domain dips slightly towards the ENE. The pronounced magnetic lineaments present in sheet 33A06 adjacent to the study area (Mollen and Crozier lakes area) clearly indicate the presence of elongated ovoid structures which resemble domes and basins.

The DSayr is cut by steeply dipping, late NNW-SSE oriented brittle faults. Most of these faults have been inferred from maps of the total magnetic field, magnetic gradient and tilt (SIGÉOM). On outcrops, the expression of these late structures consists of epidotized, hematitized or both brittle fractures. 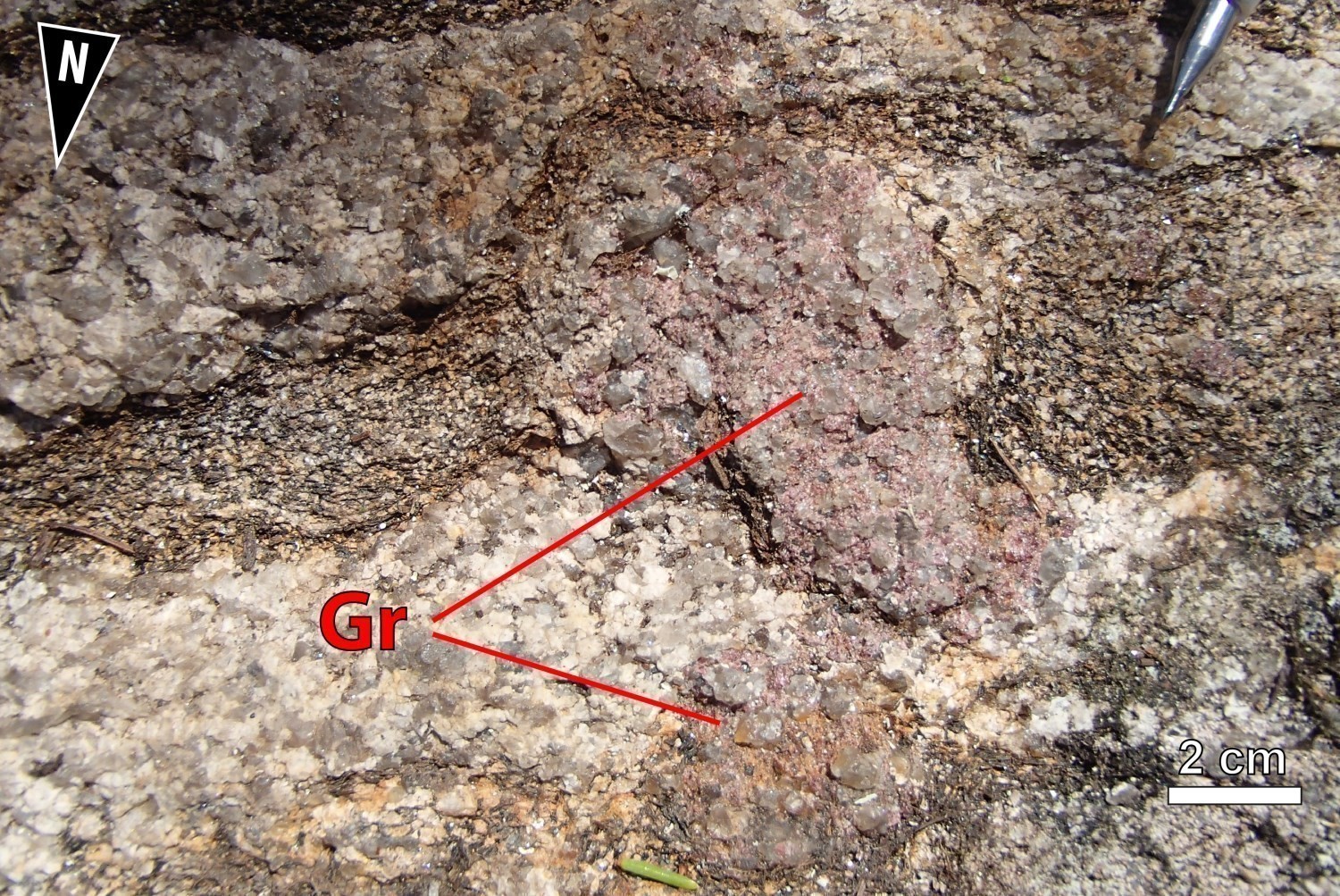 Metasedimentary rocks of the Laguiche Complex are commonly highly migmatized, with a percentage of mobilisate commonly exceeding 50% of the total volume of the rock. The presence of paragneiss and metatexites in the southern portion of the DSayr evolving towards diatexites and anatectic granites in the northern part indicates an increase in partial melting and possibly in the temperature gradient. Biotite is ubiquitous in these paragneiss. Garnet and hornblende are present locally, both in the mobilisate, restitic parts and paleosome. Othopyroxene has not been observed. A biotite-garnet mineralogical assemblage indicates that paragneiss have reached metamorphic conditions typical of the upper amphibolite facies.

At least three types of mobilisate are clearly visible in paragneiss that would have been injected during the great continuum of deformation Dn:

1) Thin in situ leucosomes (millimetres to centimetres) subconformable to the S0 fabric, if present. These leucosomes are commonly folded by Pn folds and are boudinaged and discontinuous. This mobilisate seems to have been generated during deformation Dn.

2) Large injections form bands of granitic to tonalitic melting material which are preferentially injected into Sn foliation planes. This generation of mobilisate forms a stromatic texture. This mobilisate would be synkinematic and its injection would correspond to the peak of deformation Dn.

3) Finally, the mobilisate that is late in its development during the Dn deformation, cuts off the generations mentioned above.

The Ayr Structural Domain differs from neighbouring domains by a more intense magnetic susceptibility, which is very uneven and structured. A few kilometres west of mapped sheets, elliptical and circular annular structures visible particularly on the magnetic gradient map (SIGÉOM) suggest a domed and basin deformation for the DSayr. One of the peculiarities of this domain is that magnetic lineaments drawn with the help of the magnetic gradient map (SIGÉOM) do not always coincide with the trace of regional foliation Sn. 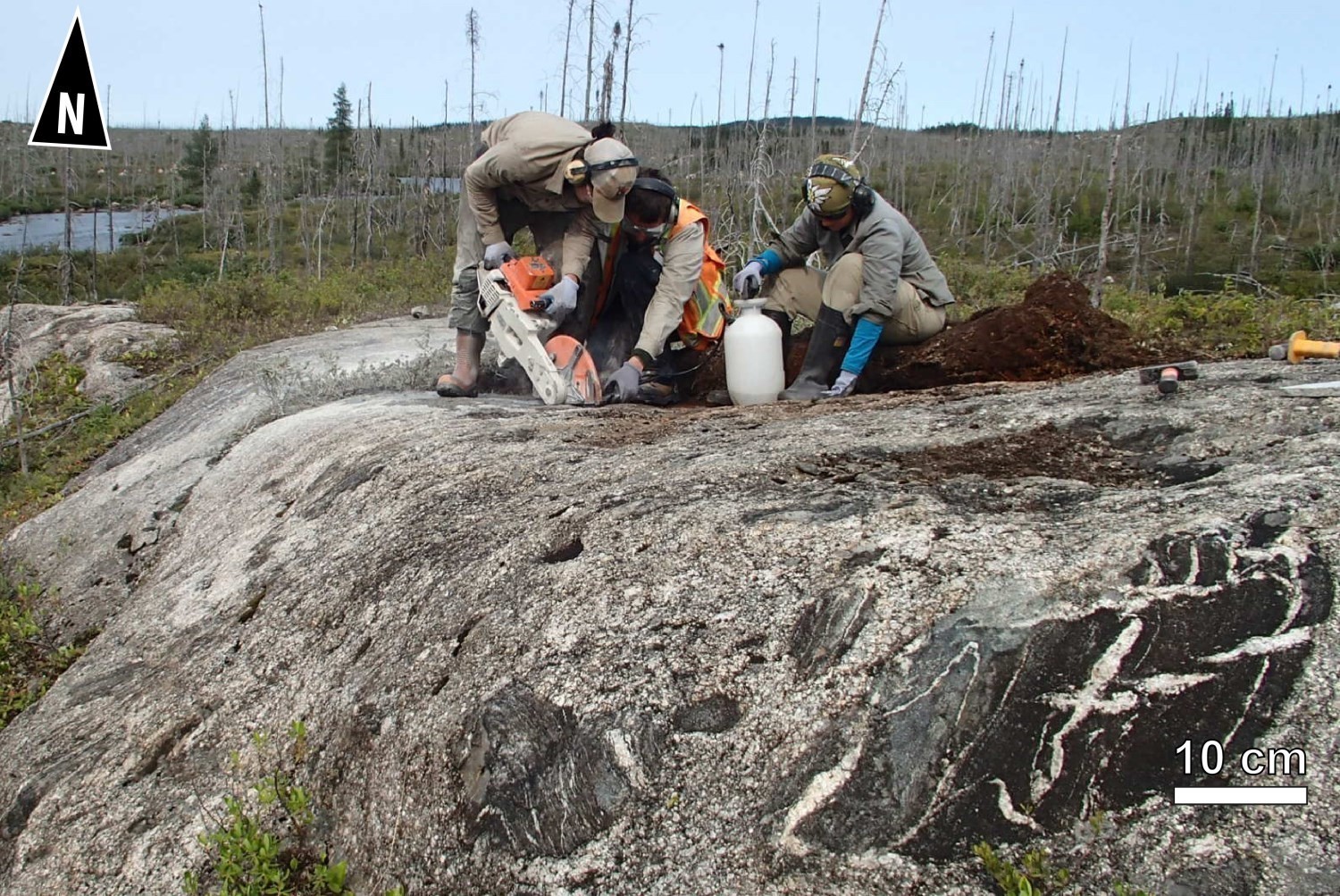 In the DSayr area, a sample of paragneiss derived from wacke belonging to the Laguiche Complex (16-HH-1654-A, sheet 33A10) has been dated. Monazite in this sample yielded a uniform age of 2692 ±6 Ma (Davis and Sutcliffe, 2018), which represents a metamorphic age and a minimum age of deposition for sedimentary rocks. This age appears to date the metamorphic episode associated with partial melting of sedimentary rocks of the Sedimentary Complex and could therefore date deformation phase Dn. Two anatectic granite samples also collected in the Laguiche Complex (16-AS-6666-A, sheet 33A10 and 18-SG-7102-A﻿, sheet 33A07) provided crystallization ages (U-Pb on zircons) of 2674 ±5 Ma (Davis and Sutcliffe, 2018) and 2684 ±3 Ma (Davis, 2019) respectively.