Hocq (1985), while mapping the Cadieux and Campan lakes area, described a wide strip of heterogeneous granitoids occupying the southern half of sheets 33A10 and 33A09, and called it the “Misasque River massif.” The work conducted by Talla Takam et al. (in preparation) in the summer of 2016 allowed this massif to be subdivided according to the observed lithologies’ composition, geochemistry and aeromagnetic signature. The eastern portion of the massif composed of tonalite was then designated as the Misasque Pluton (now Misasque Complex) of the La Grande Subprovince, while granites and granodiorites of the central part of NTS sheet 33A10 were assigned to the Nikos Suite, which was emplaced along the Opinaca-La Grande contact.

The Nikos Suite (nAnik) consists of several intrusions that are mainly granitic, but locally granodioritic or monzonitic. This unit is distinguished from the surrounding paragneiss on the aeromagnetic map. The rock is generally homogeneous at the outcrop scale, but appears much more heterogeneous at the 1:50 000 scale. This suite consists of two informal units: unit nAnik1 of granodioritic composition and unit nAnik2 of monzonitic composition. 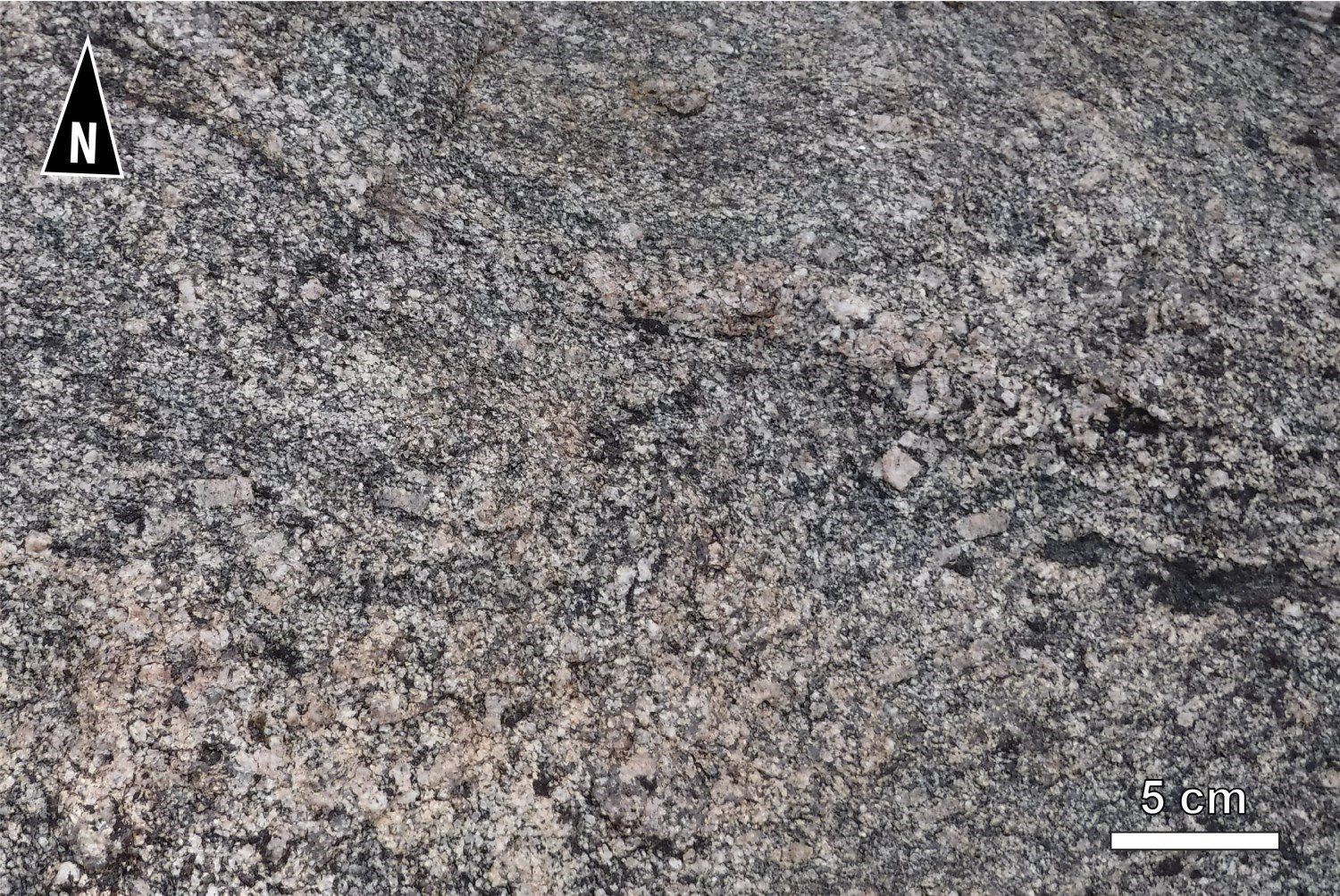 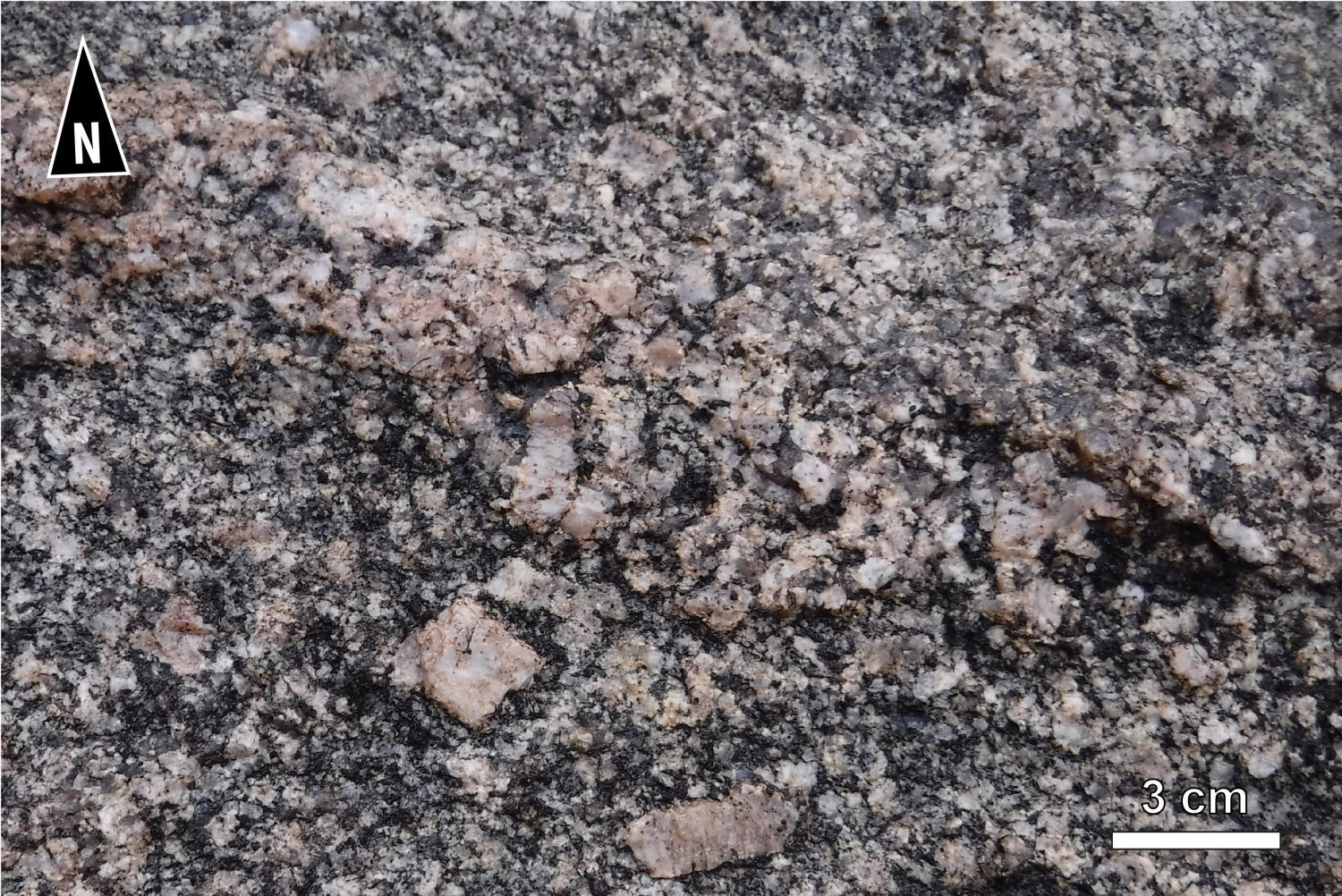 Unit nAnik1 consists mainly of granodiorite and tonalite. The rock is light grey to pinkish white, medium grained and slightly foliated. A porphyraceous texture is common and exhibits up to 10% K-feldspar phenocrystals (1-3 cm). The rock is mainly composed of quartz, microcline, biotite and hornblende. The percentage of mafic minerals is between 5 and 20%. The damouritization of plagioclase and chloritization of biotite range from weak to strong. 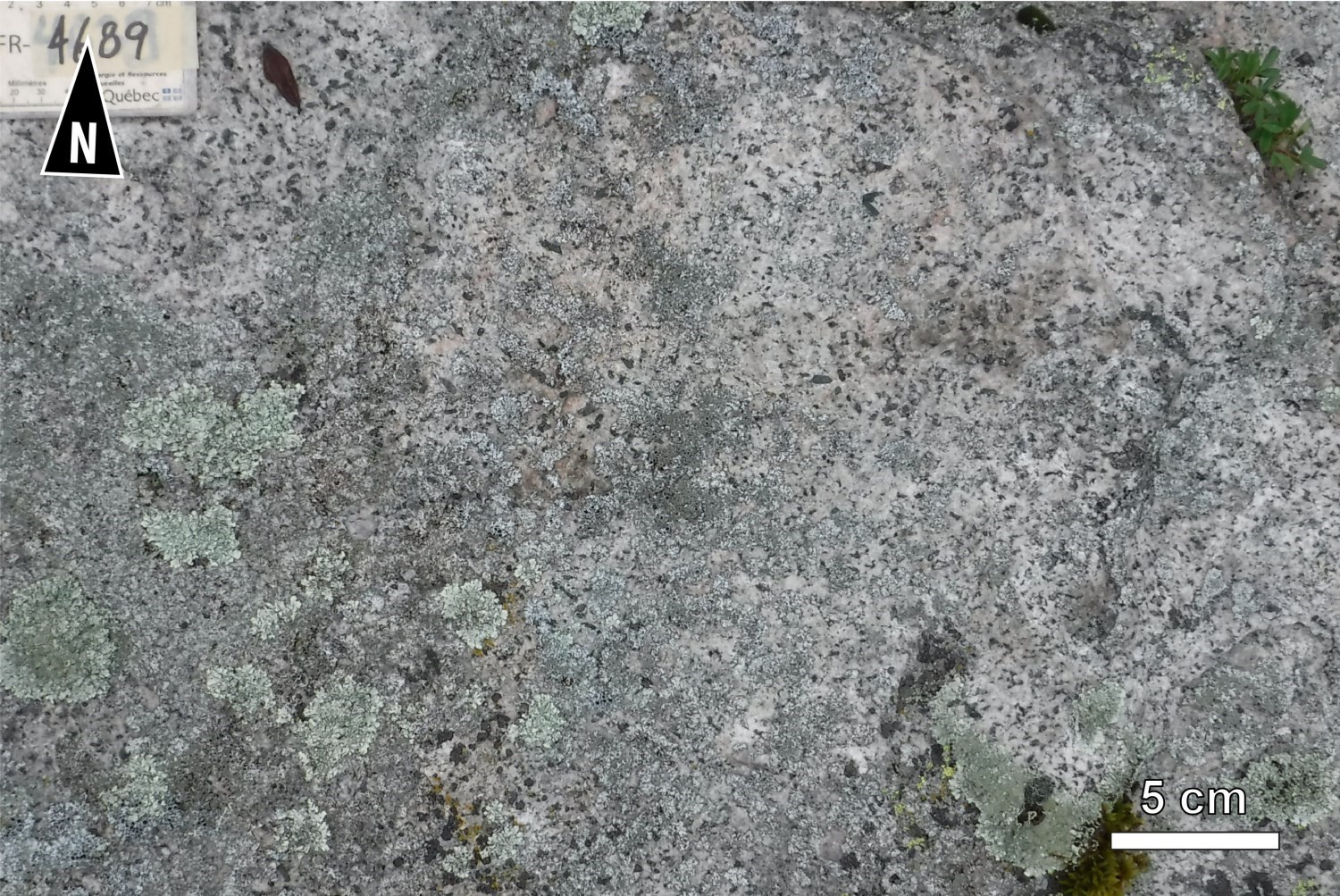 Rocks of unit nAnik2 are granitic to monzonitic. The rock is pinkish white, massive to slightly foliated and medium to coarse grained. It is homogeneous at the outcrop scale and is locally cut by pinkish pegmatite dykes. It contains paragneiss enclaves locally. On some outcrops, it is difficult to determine whether the rock is a granite associated with a slight magmatic foliation or if it is an ultrametamorphic granite. Primarily composed of quartz, plagioclase, microcline, biotite and magnetite, the rock also contains green hornblende locally (up to 10%), but no garnet nor orthopyroxene, distinguishing it from units further north. Fresh to slightly chloritized biotite represents a few percent of the rock, while plagioclase is slightly damouritized. These alterations are locally more intense. Pethititic or myrmekitic exsolutions are observed in places. Epidote, sphene, apatite and rutile are the most common accessory minerals.

The majority of the Nikos Suite forms a 30 km by 20 km pluton in the central section of sheet 33A10. A few smaller satellite intrusions are located around the main pluton.

The Nikos Suite is located along the Opinaca-La Grande contact. It is therefore assumed to be in intrusive contact with rocks of the Laguiche Complex (nAlgi) in the Opinaca Subprovince and tonalites of the Misasque Complex (Amiq), in the La Grande Subprovince. It is also cut by a Neoarchean dyke belonging to the Mistassini Dyke Swarm (nAmib). However, geological contacts could not be observed in outcrop.