The Misasque Complex is introduced to describe a large, polyphase gneissic and intrusive mass, bounded to the north by the Laguiche Complex and to the south by the Digne Pluton. This unit represents one of the oldest units in the Cadieux Lake and Bohier Island areas. It consists of the Mesoarchean to Neoarchean basement on which the Upper Eastmain Greenstone Belt (UEGB) has been emplaced. The Misasque Complex corresponds to a “TTG”-type (tonalite-trondhjemite-granodiorite) Archean continental crust. On the total magnetic field map, the Misasque Complex is characterized by uniform and moderate magnetic susceptibility. Only NNE-SSW and E-W oriented brittle fractures form straight lines that demagnetize the complex. 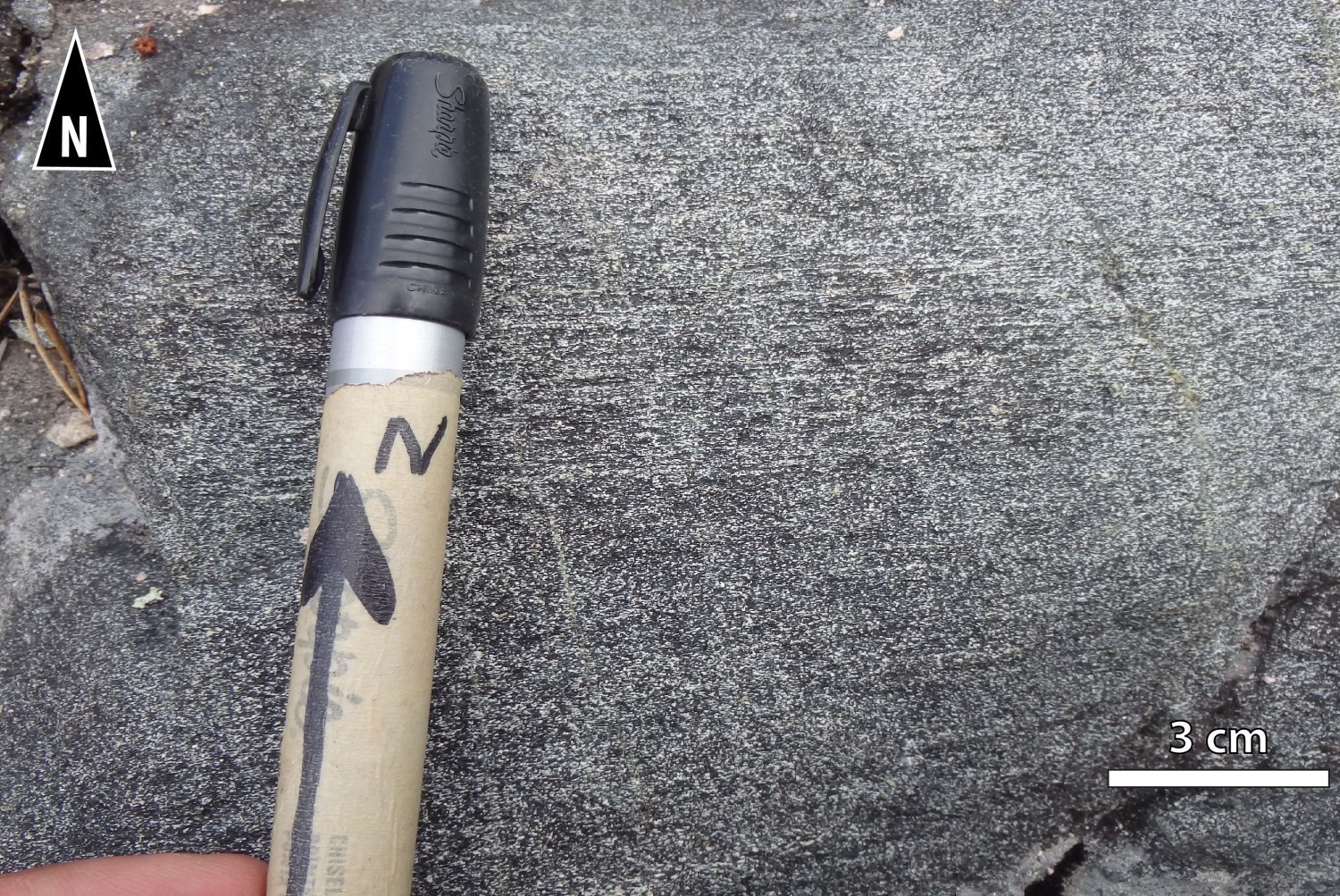 At least four (4) lithofacies have been recognized in the Misasque Complex: 1) variously migmatized tonalitic, dioritic and granitic gneiss, 2) homogeneous and foliated tonalite, 3) heterogeneous and foliated granite and granodiorite, and 4) massive to weakly foliated homogeneous granite. Rocks of the Misasque Complex are granoblastic and usually cut by several granitic phases occurring as multiple injections cutting or conformable to gneissosity. These intrusions are an integral part of the complex. Rocks of the Misasque Complex contain decimetric to decametric horizons and enclaves of intrusive rock (diorite, gabbro, amphibolite, quartz diorite, tonalite, very locally paragneiss and pyroxenite) representing 1% to 25% of outcropping surfaces. The most common enclaves are dioritic and gabbroic. They have a black and white spotted alteration patina. Enclaves are amphibolitized, foliated and highly granoblastic. They are characterized by well-developed L-S deformation.

From a geochemical perspective (Beauchamp, 2019), rocks of the Misasque Complex are tonalite and type I metaluminous granite (Frost et al., 2001). Samples analyzed are enriched in light rare earths compared to heavy rare earths. Granite profiles are more evolved than those of tonalite and have an Eu negative anomaly (Palme and O’Neill, 2004). Spider diagrams of tonalite and granite exhibit negative anomalies in Nb-Ta, P, Ti and Sm, and enrichments in La-Ce and Zr-Hf (McDonough and Sun, 1995).

Because of the complexity and inconsistent distribution of lithological units, it was not possible to isolate them on the geological map. Lithofacies presented below are in order of importance. 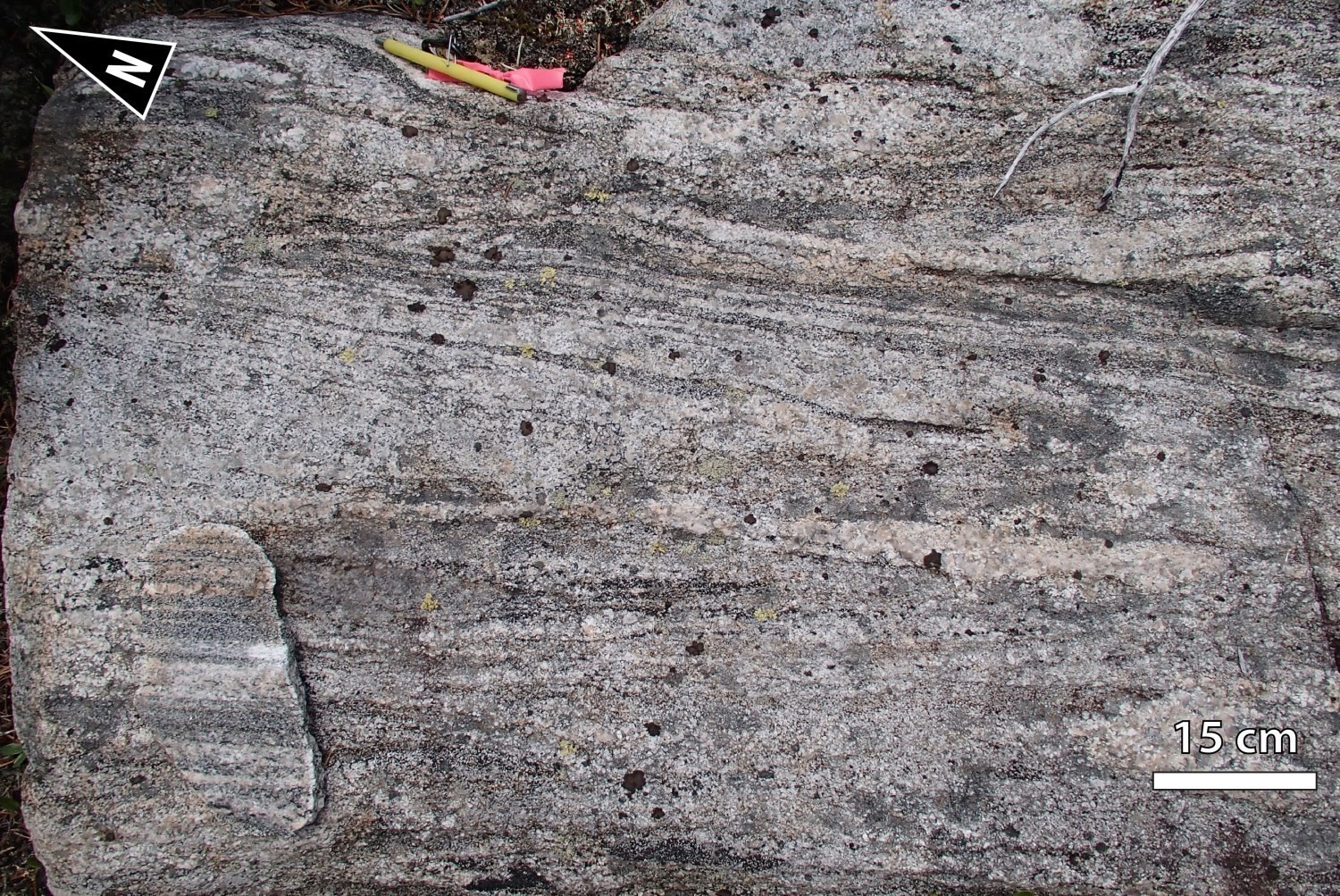 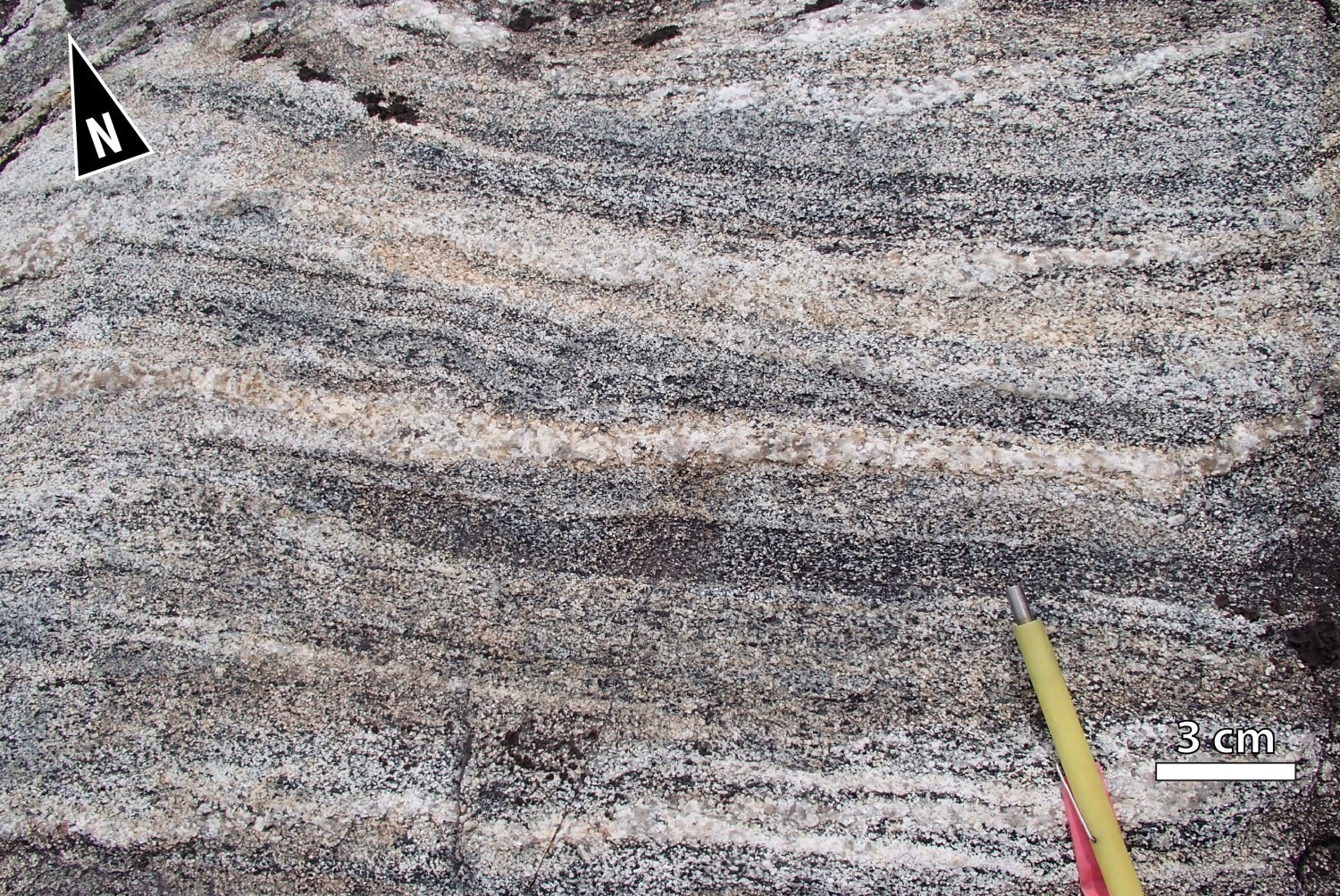 This orthogneiss unit consists of alternating millimetric to decimetric bands having composition varying from tonalitic to dioritic to granitic. In thin section, gneissosity occurs as alternating mafic bands (biotite ± hornblende ± magnetite) and whitish quartzofeldspathic layers. Sharp, irregular and very contrasting banding is accentuated by the presence of sub-conformable granitic injections. A large proportion of these rocks have undergone migmatization to varying degrees of partial melting, which is manifested by the presence of 5 to 70% granodioritic to granitic mobilisate. The mobilisate occurs as centimetric to decametric, discontinuous bands parallel or cutting regional foliation. Within the most migmatized rocks, intermediate to mafic enclaves float in the mobilisate. Hornblende porphyroblasts are distributed irregularly near intermediate rock enclaves. Centimetric amphiboles give the rock a speckled texture.

Orthogneiss contain biotite and magnetite, with varying amounts of green hornblende, chlorite and epidote. Ferromagnesian minerals form clusters accounting for 5 to 15% of the rock. Traces of sphene, apatite and rutile can also be observed. Coarse plagioclase crystals are subhedral, twinned and weakly to strongly altered (sericitized and saussuritized). Biotite is partially to completely chloritized and locally epidotitized. In thin section, gneiss have polygonal and interlobed textures. Quartz grains have a sutured rim and an undulatory extinction. Apatite and three types of epidote (allanite, pistachite and clinozoisite) are also observed in places. 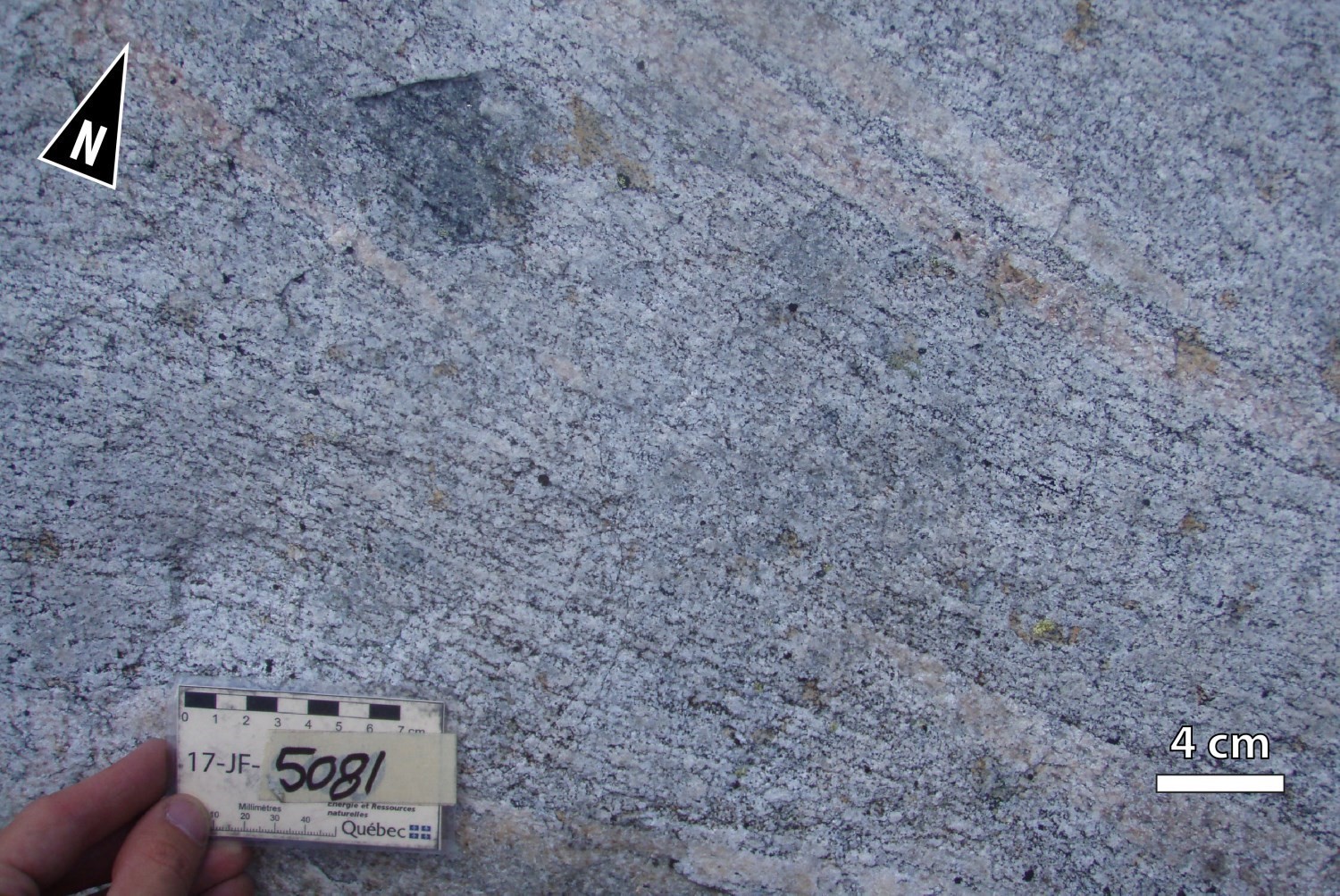 This facies consists of a foliated, homogeneous light grey tonalite. This unit is fine to medium grained and contains 5 to 15% ferromagnesian minerals (biotite ± magnetite ± hornblende). This unit, unlike the one described above, is not a gneissic. Within the tonalitic facies, there are 5 to 25% bands of white hornblende granite and hololeucocratic whitish to pinkish granite in sharp and/or diffuse contact. Some sharp and continuous bands are interpreted as early transposed injections, while those that are millimetric to centimetric, diffuse and discontinuous are instead interpreted as mobilisate. In thin section, tonalite is usually well recrystallized. Typical ferromagnesian minerals are biotite and hornblende. They are disseminated in the matrix and form, in places, continuous or discontinuous millimetric laminae. Within a single thin section, some bands are richer in biotite and others in hornblende. Plagioclase crystals, on the other hand, are locally saussuritized. Accessory minerals observed are zircon, apatite, allanite and sphene.

Heterogeneous and Foliated Granite and Granodiorite 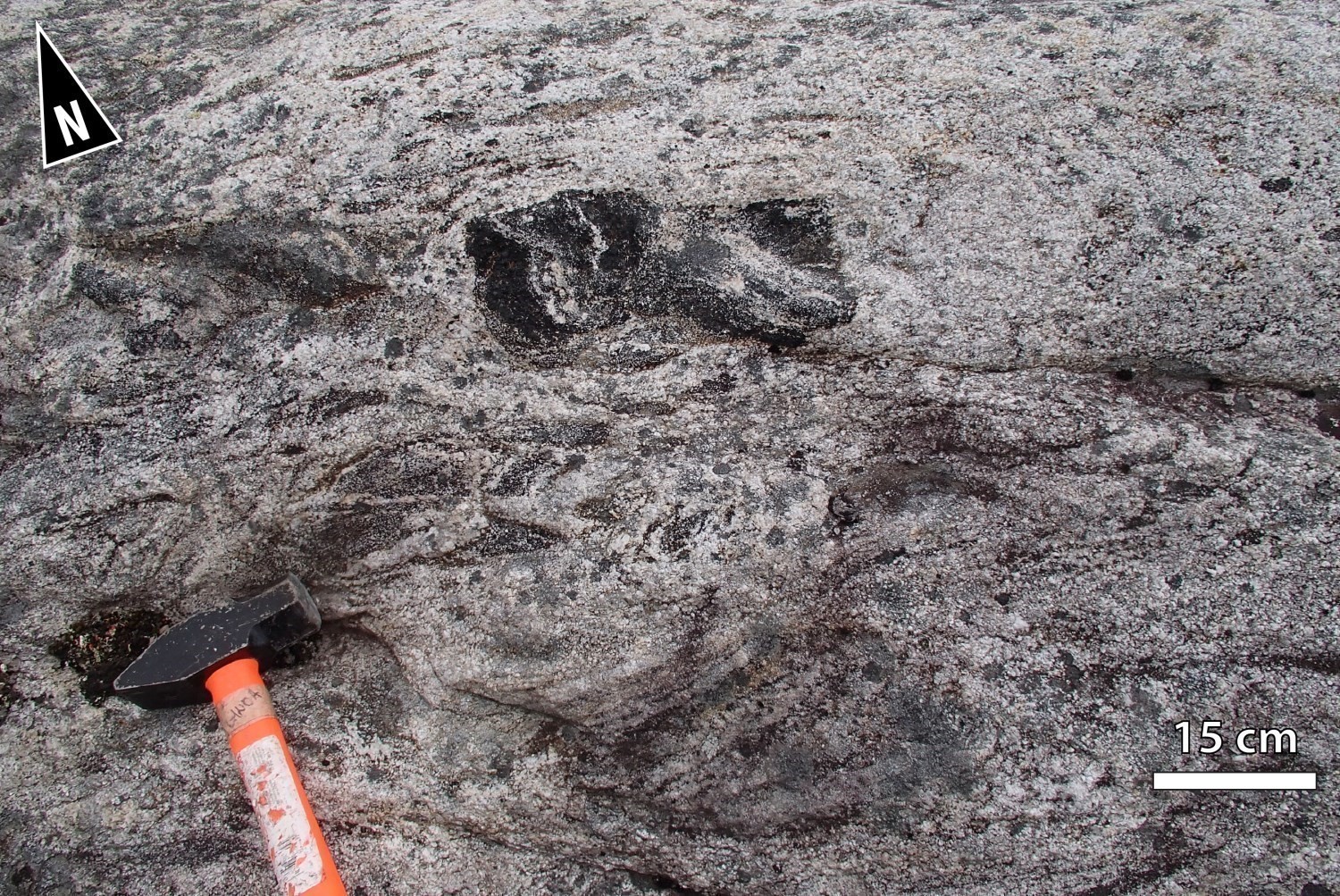 The unit of foliated granite and granodiorite is heterogeneous. It contains 5 to 20% highly assimilated enclaves or relics of felsic intrusive rocks. A beginning of gneissosity marked by segregation of quartzofeldspathic and ferromagnesian minerals can be observed locally, as well as creep textures. This unit is commonly characterized by variation in ferromagnesian minerals and grain size, which contributes to its heterogeneous appearance. Hornblende clusters and phenocrystals are distributed erratically and randomly in the unit. Biotite schlierens are present. This unit could be a heterogeneous diatexite derived from an intrusive protolith﻿ 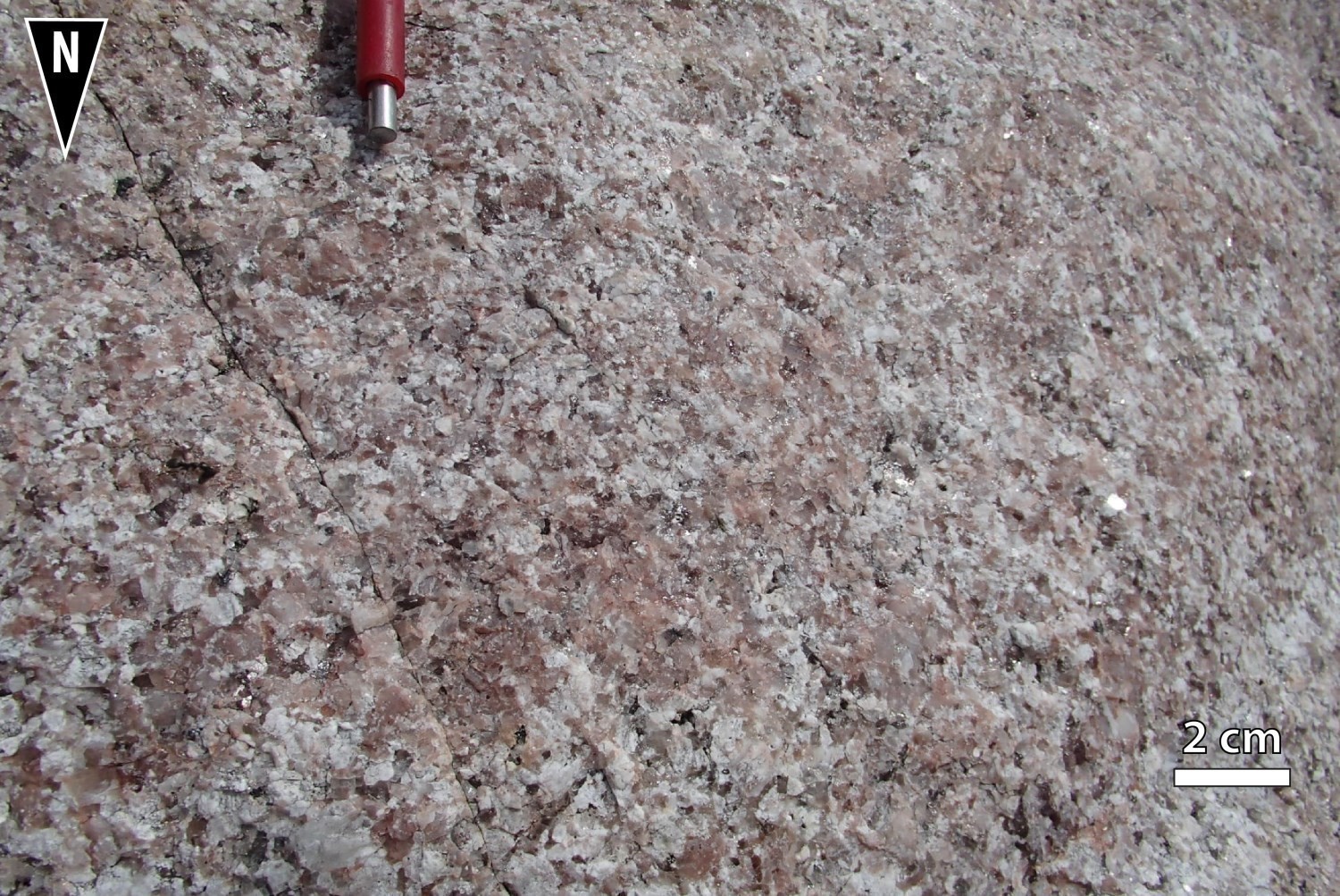 Homogeneous granite has a pinkish white alteration patina. It is usually massive to weakly foliated, leucocratic and heterogranular. Biotite and magnetite visible to the naked eye are generally observed. In thin section, traces of hornblende, muscovite, chlorite, epidote, apatite, zircon, as well as myrmekite textures, can be seen.

The Misasque Complex covers an area of 1250 km﻿2 in the Cadieux, Emmanuel and Léran lakes and Bohier Island areas (NTS sheets 33A07 to 33A10 and 23D12). It extends more than 100 km in an ENE-WSW direction, from Léran Lake to Cadieux Lake. The Misasque Complex has a width ranging from 5 to 25 km in a NNW-SSE direction. Its northward extension is limited by the Ribera Pluton and Nikos Suite, two intrusive bodies that mask the contact between the Opinaca and Opatica subprovinces. To the south, it is in contact with the Upper Eastmain Greenstone Belt, Digne Pluton and Wahemen Suite.

Three samples from the Misasque Complex were dated. The spread of the Mesoarchean to Neoarchean ages demonstrates the existence of several generations of zircons and reflects the complexity of this unit, which contains several phases in diffuse contact.

The first sample, 16-FM-2705, is located in the centre of the complex in sheet 33A09. It is described as a foliated biotite-hornblende-magnetite tonalite.﻿ U-Pb analyses gave two age categories for zircons. The oldest is 2822 ±5 Ma and the youngest is 2695 ±8 Ma. The best estimate for the age of magmatic crystallization of the tonalite is 2695 ±8 Ma. Zircons dated to 2822 ±8 Ma would be inherited from an underlying old basement. A rim with low Th/U ratio also yielded an age of 2622 ±16 Ma and would represent the age of a metamorphic event (Davis and Sutcliffe, 2018).