Based on data from the regional mapping campaigns of Hocq (1975, 1985), a strip of leucocratic biotite ± hornblende gneiss partially aligned with the current map outline seemed to correspond to the MacLeod Batholith. The first works to mention the « MacLeod Granodiorite » were those of exploration companies (McAuley, 1990; Prior, 1991; Prior et al., 1991; Winter, 2008, 2011). Private companies mapped the extent of the Macleod Granodiorite because of its economic potential that was brought to light in 1988 with the discovery of the Lac MacLeod mineralized zone. Since then, several other Cu, Mo, Ag, Au and W mineralized showings have been discovered (Lac MacLeod-NE, Pointe Rocky, Pointe Richard, ML-06-128, ML-06-123, Windy Cible 4-3 and Cornu). They all have the unique feature of being spatially associated with the edge of the MacLeod Batholith.

Prior et al. (1991) divided the “MacLeod Granodiorite” into five (5) subunits. They used the hornblende/biotite ratio and rock texture (foliated or lineated) to distinguish facies, namely: 1) hornblende granofels, 2) hornblende-(biotite) granofels, 3) foliated hornblende-biotite granofels, 4) foliated biotite-(hornblende) granofels, and 5) foliated biotite granofels. The MacLeod Batholith (nAmcl) was formally introduced by Beauchamp (2020) to describe a large intrusive mass (25 km x 15 km) located in the Cadieux Lake area at the junction of sheets 33A02, 33A03 and 33A07. This batholith is regionally associated with a strong positive magnetic anomaly. No facies subdivision could be completed following the Ministère‘s mapping work. 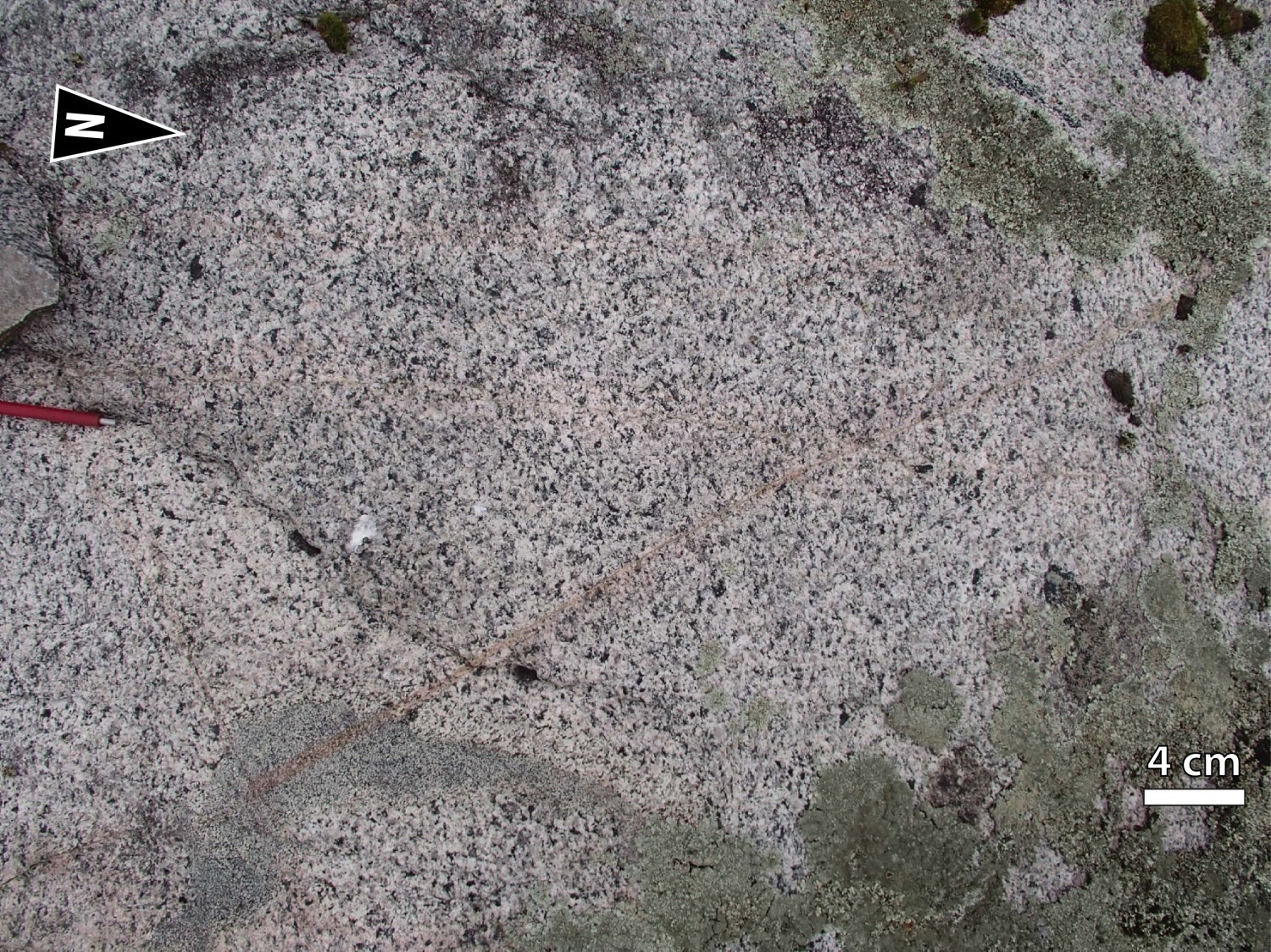 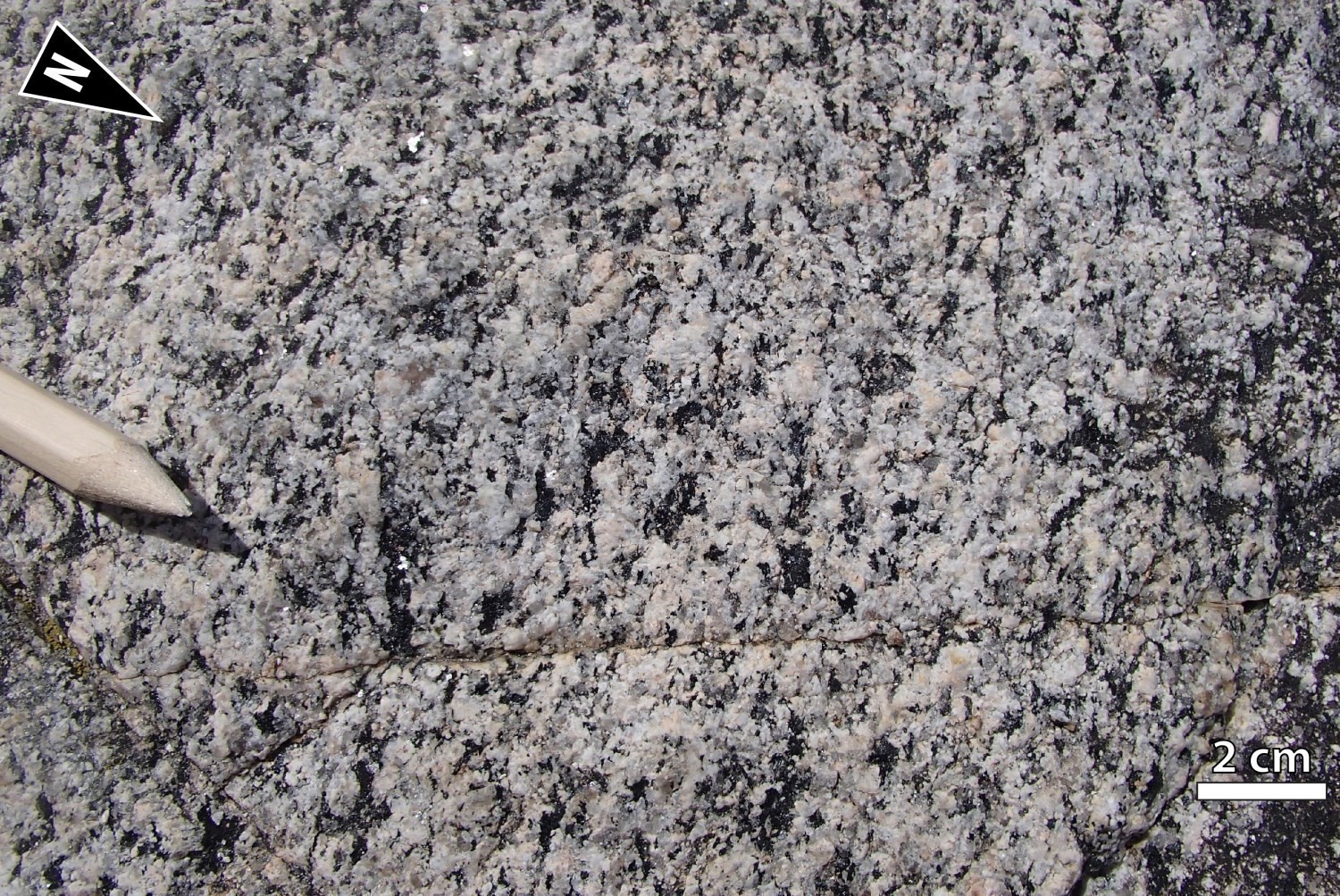 The MacLeod Batholith forms a saucer-shaped intrusive complex emplaced in the Neoarchean. It is hosted in metasedimentary rocks of the Laguiche Complex and cuts adjacent intrusive units belonging to the Opatica Subprovince. The MacLeod Batholith is very homogeneous, medium grained and foliated. Its average composition consists of granodiorite and quartz monzodiorite, whose quartz percentage generally oscillates around 20%. Some compositional zonality is observed in the intrusion. At the edge of the batholith, the percentage of quartz in the rock is slightly higher than 20%, showing granodiorite. At the centre of the intrusion, a few outcrops rather show quartz-depleted monzodiorite (~5%). The rock is white-grey with black spots in altered surface and fresh exposure. Hornblende and biotite are observed throughout the intrusion. Hornblende is dominant in the centre and western portion of the intrusion, while biotite is more abundant in the Corne Lake area. Magnetite gives the rock a homogeneous magnetic signature ranging from moderate to strong. Ferromagnesian minerals form millimetric to centimetric clusters aligned in weakly to moderately developed Sn foliation planes.

In thin section, minerals observed are quartz, feldspars (plagioclase to K-feldspar rations of 2/1 to 3/1), hornblende and biotite. Accessory minerals are sphene (≤5%), epidote (pistachite, allanite), apatite, zircon and magnetite. Hornblende chloritization and plagioclase sericitization are commonly observed. The MacLeod Batholith is characterized by zoned alteration ranging from mild to intense. Potassic alteration (biotite, magnetite and K-feldspar in varying proportions) is present at the centre of the intrusion. Propylitic alteration (quartz, chlorite and epidote) and silicification are located at the edge of the intrusion. Later hematite and epidote-filled veinlets cut the Sn foliation and remobilize some of the Cu-Mo-Ag-Au-W mineralization hosted in the MacLeod Batholith and surrounding metasedimentary units.

The MacLeod Batholith is sharply cut by hematitized granite, which could represent a later magmatic intrusion within the batholith. Granite is massive to weakly foliated and is composed of biotite-hornblende ± magnetite. Magnetite forms centimetric clusters. The presence of hornblende in the granite may be a result of enclave contamination. The MacLeod Batholith contains numerous enclaves of mesocratic diorite and granoblastic hornblende gabbro that show a well-developed mineral lineation.

Geochemical analyses of samples collected during the summer 2018 mapping work (Beauchamp, 2020) indicate that the MacLeod Batholith is a magnesian granitoid, generally calc-alkaline and type I (Maniar and Piccoli, 1989) metaluminous (Frost et al., 2001) . In the diagrams of Pearce et al. (1984), samples plot in the field of volcanic arc granites. The rare earth diagram normalized to CI chondrite (palm and O’Neill, 2004) shows light rare earth enrichment over heavy rare earths. Negative anomalies in Nb, Ta, P and Ti, as well as positive anomalies in La, Ce and Nd characterize the spider diagram of this unit. 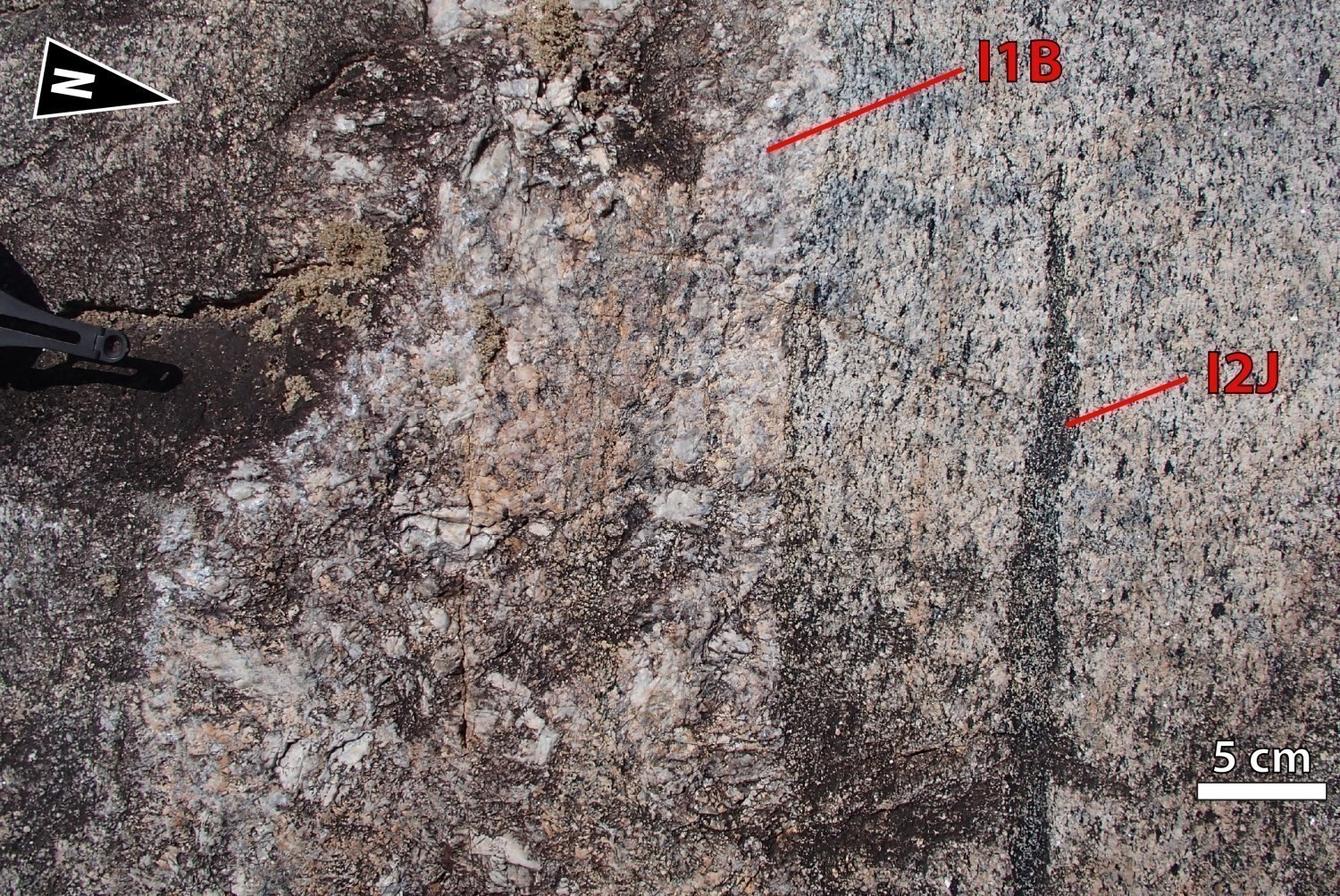 The MacLeod Batholith is younger than the Misasque Complex, Digne Pluton and Laguiche Complex, according to field relative chronology and available geochronological dating. Since it is affected by the Sn foliation, intrusion of the MacLeod Batholith would be later or synchronous with the Dn deformation.

Both macroscopically and microscopically, rocks of the MacLeod Batholith resemble those of the Lépante Suite. It is therefore possible that these two intrusive bodies are related and of similar ages.