The Digne Shear Zone was defined by Beauchamp (2019) following a mapping survey conducted in the Cadieux Lake area in the summer of 2018. It is located at the contact between intrusive and volcanic rocks of the Dolent Formation, which is part of the Upper Eastmain Greenstone Belt (UEGB), to the south, and the Digne Pluton, to the north. It is described using geological observations collected by Beauchamp (2019) and Beauchamp et al. (2018), and using analysis of geophysical imagery (total magnetic field and vertical gradient) from the SIGÉOM and detailed magnetic maps by Wade et al., 2014.

The Digne Shear Zone marks the contact between the Dolent and Cadieux structural domains.

The only unit affected by the Digne Shear Zone is the Digne Pluton.

In the Structural Lexicon, the dominant fabric of a domain is, by definition, associated with the Dn phase. Earlier phases are referred to as Dn-1, Dn-2, etc. and later phases as Dn+1, Dn+2, etc. The Dn phase of a domain does not therefore necessarily correspond to that of neighbouring domains. The planar fabric (Sn), which is best expressed in the Digne Shear Zone, corresponds to regional fabric S1. It predates the main regional fabric that is generally observed on outcrops in the Cadieux Lake and Bohier Island areas (Sn=S2). 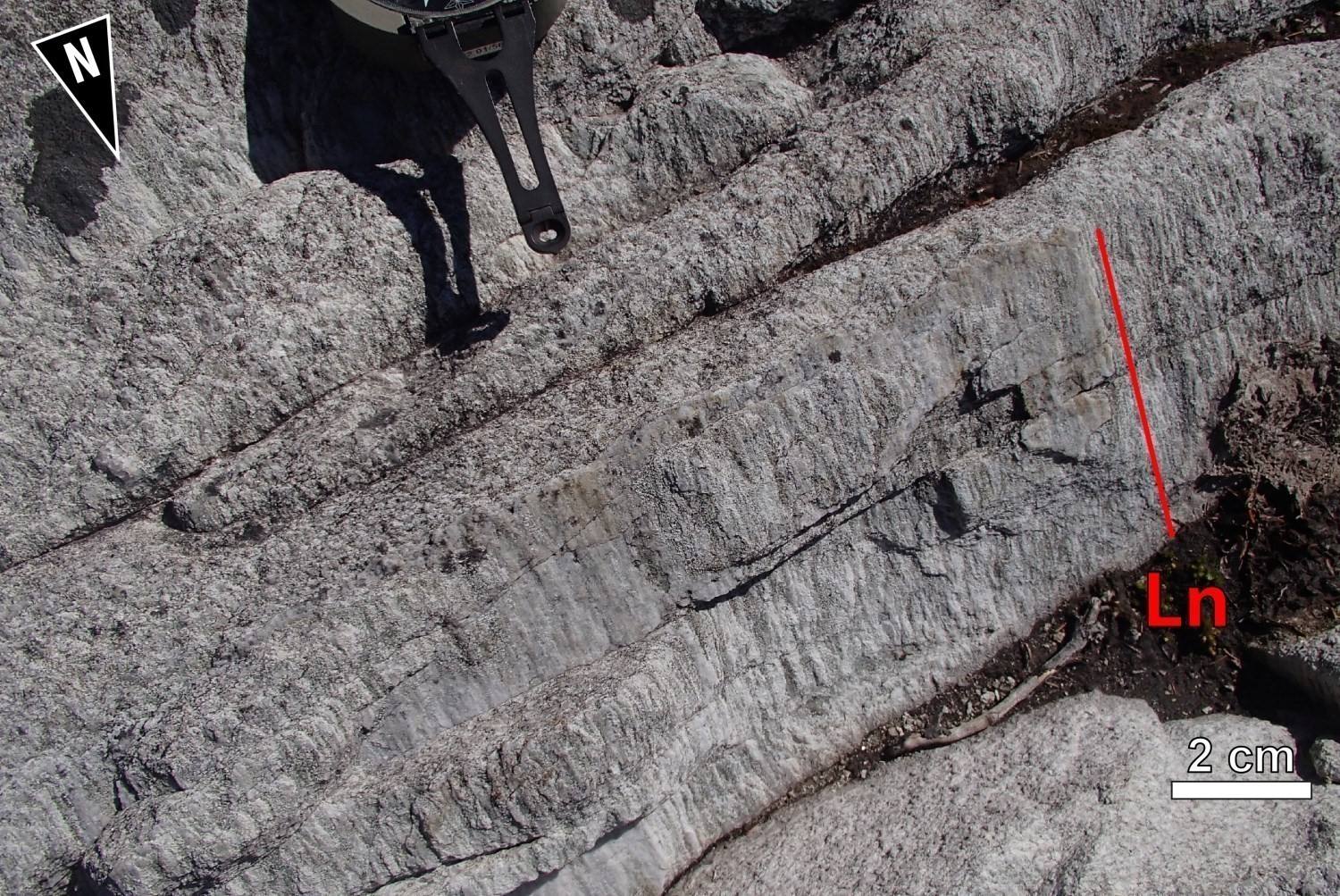 The main fabric of the Digne Shear Zone is stretch lineation Ln. Rocks of the Digne Pluton, which are in contact with the UEGB, form L>> S tectonites. Lineation is defined by very pronounced stretching of quartz and feldspar grains until bands are formed. A planar fabric is locally observed, especially as one moves northwards away from the Digne shear zone. The Sn planar fabric is weakly to moderately developed and is distinguished by the millimetric spacing of flattening planes. Phyllosilicates (biotite, chlorite and muscovite) are oriented in Sn foliation planes. 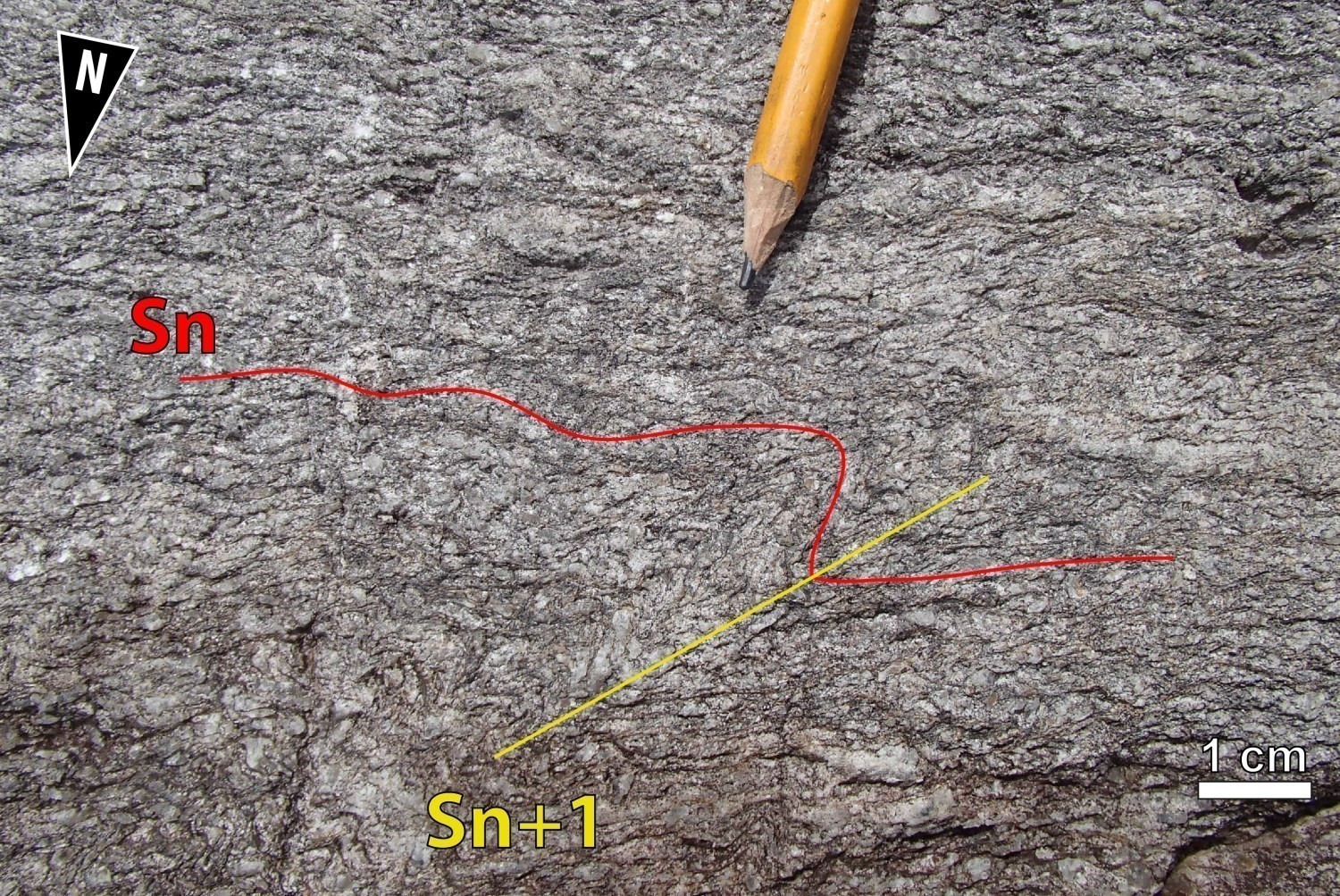 As shown on the geological map of the Cadieux Lake area, the CSdig is folded by a succession of regional ENE-WSW folds (Pn+1) which axes plunge slightly to moderately towards the ENE. On outcrops, a few occurrences of Pn+1 folds having NNE-SSW axial planes parallel to crenulation Sn+1 are found.

The existence of very detailed magnetic maps of the Digne Shear Zone (Wade et al., 2014) has enabled mapping numerous brittle faults having steep dip. Two major families can be identified. A first family of NNW-SSE faults offsets shearing in a dextral manner. A second family of faults having sinistral movement has an orientation varying from NW-SE to WNW-ESE. These fractures also affect rocks of the Dolent Structural Domain (DSdol). 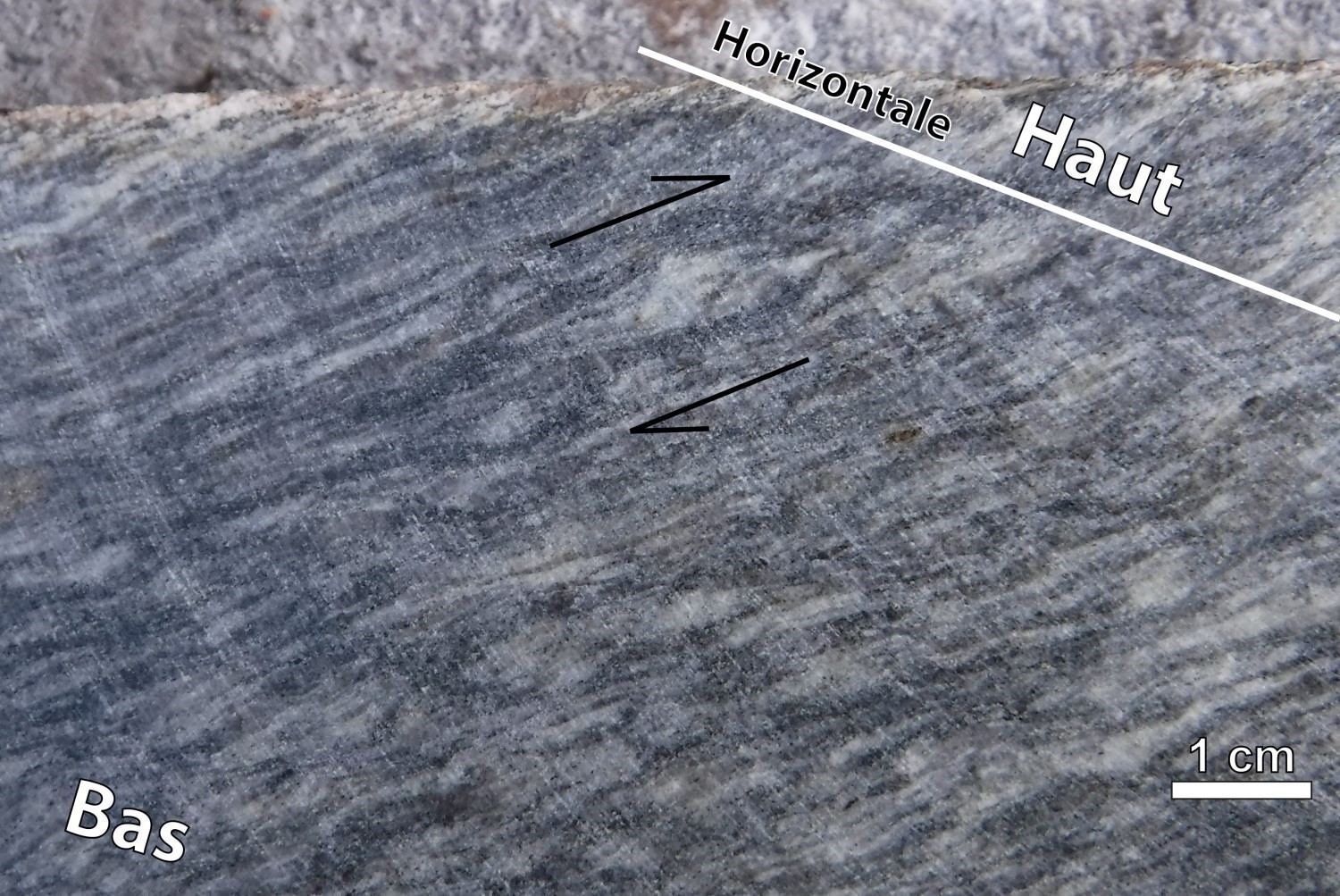 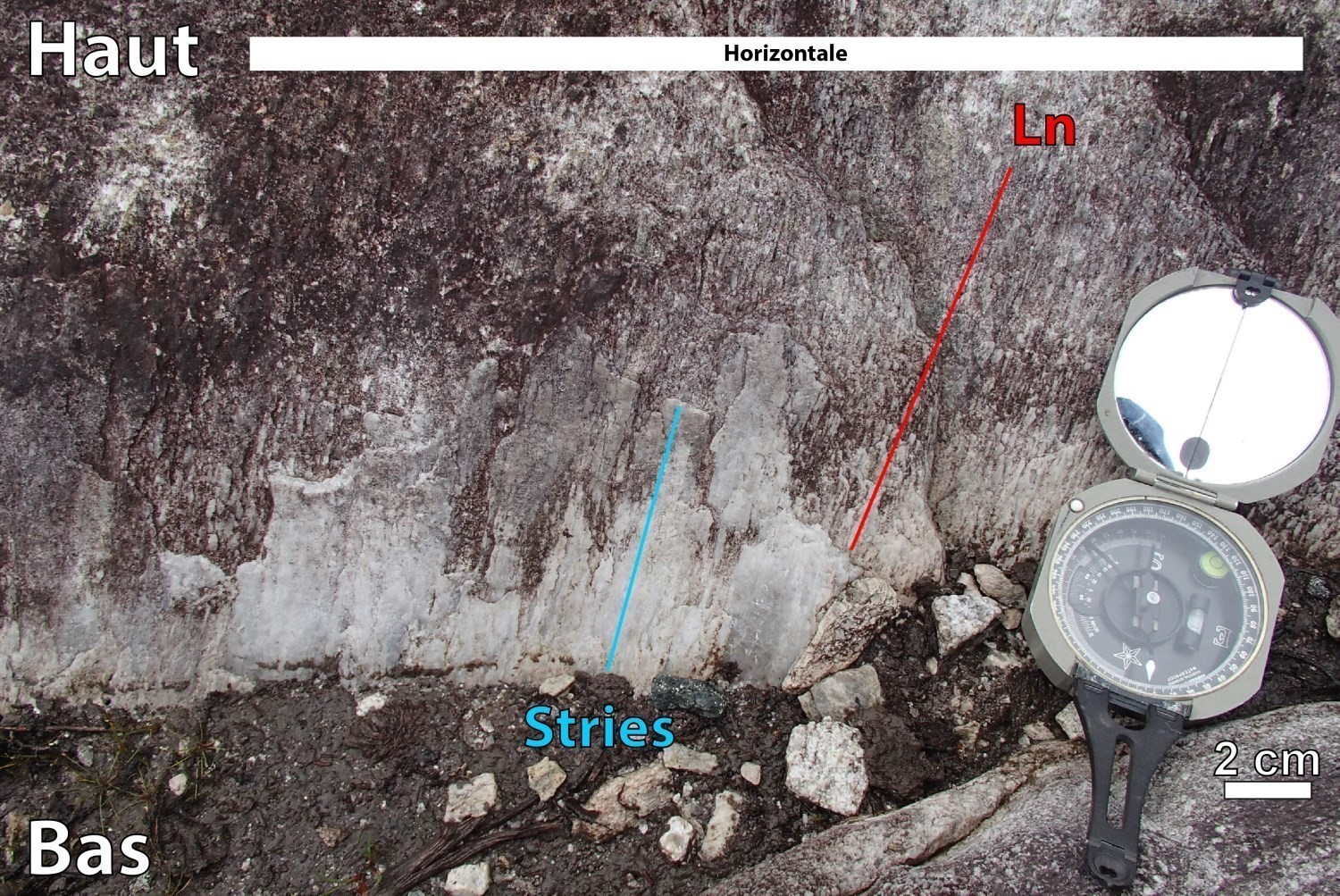 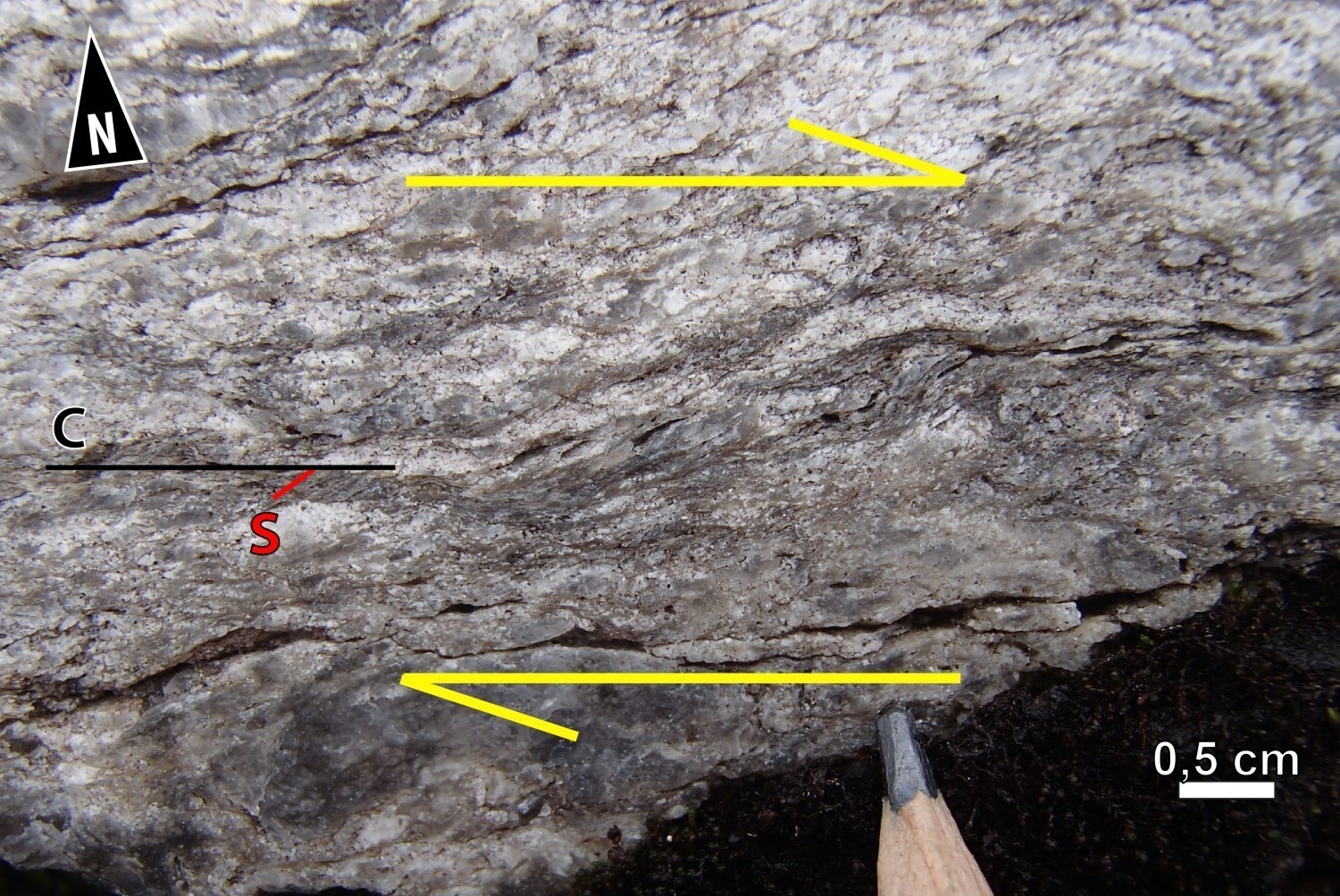 The CSdig is a straight to curvilinear, homogeneous and well-defined shear zone. It is characterized by the presence of L>>S tectonites. Deformation is mainly in the constriction domain. The very pronounced stretch lineation (313°/69°), which corresponds to the X-axis on the ellipsoid of the finished deformation (Flinn, 1965), indicates the main direction of tectonic transport of the rocks. This significant ductile deformation could possibly be caused by gravitational sinking of greenstones beneath granitoids of the Digne Pluton or by thrusting of the Digne Pluton over UEGB rocks. 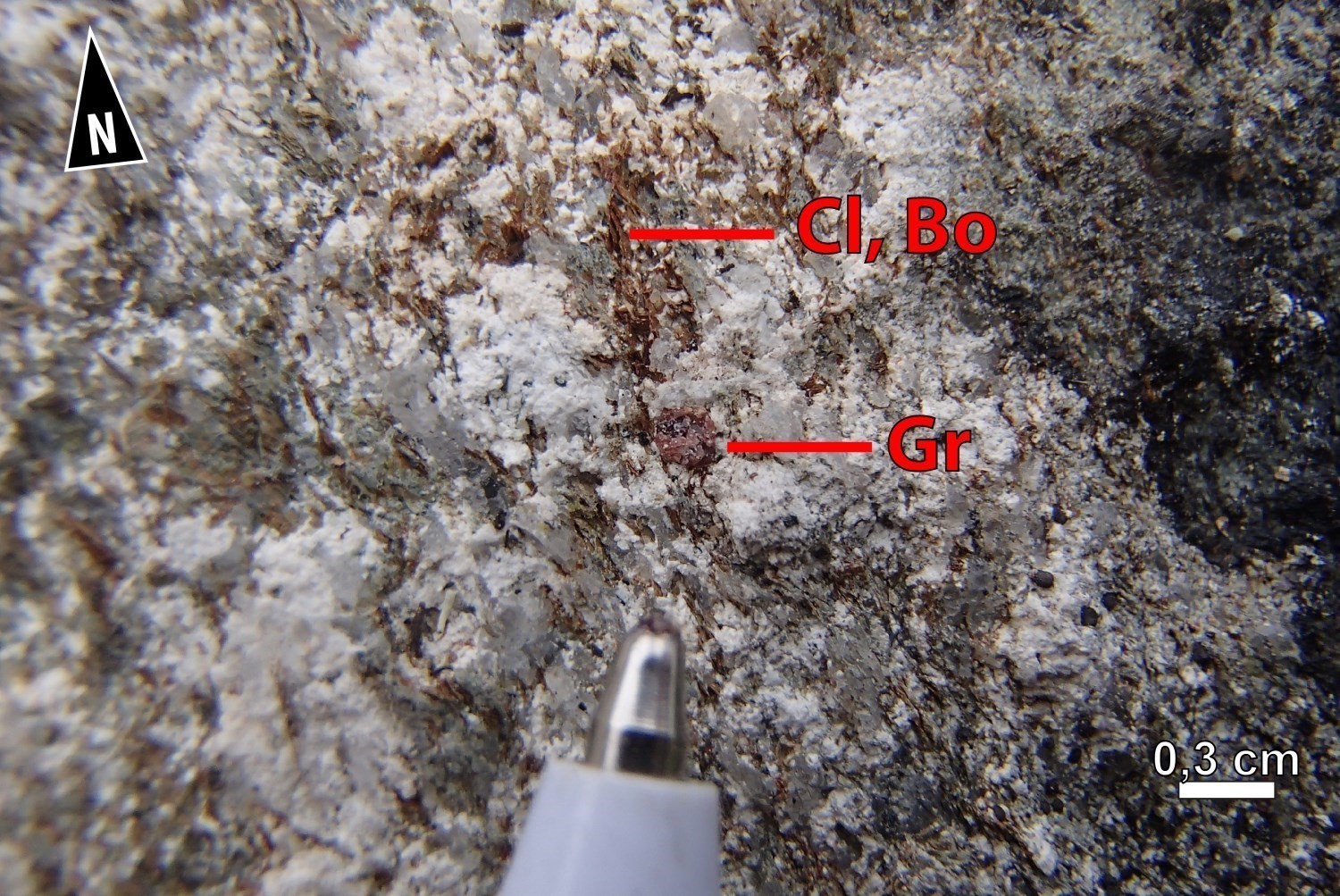 Rocks of the Digne Pluton contain quartz-plagioclase-biotite ± chlorite ± muscovite ± garnet assemblages. The metamorphic facies reached along the CSdig cannot be determined. It is most probably similar to that reached in the UEGB, i.e. the amphibolite facies.

Alterations observed along the CSdig are muscovitization, chloritization and albitization. The absence of outcrops in the deformation zone does not allow the distribution and intensity of alteration to be documented. 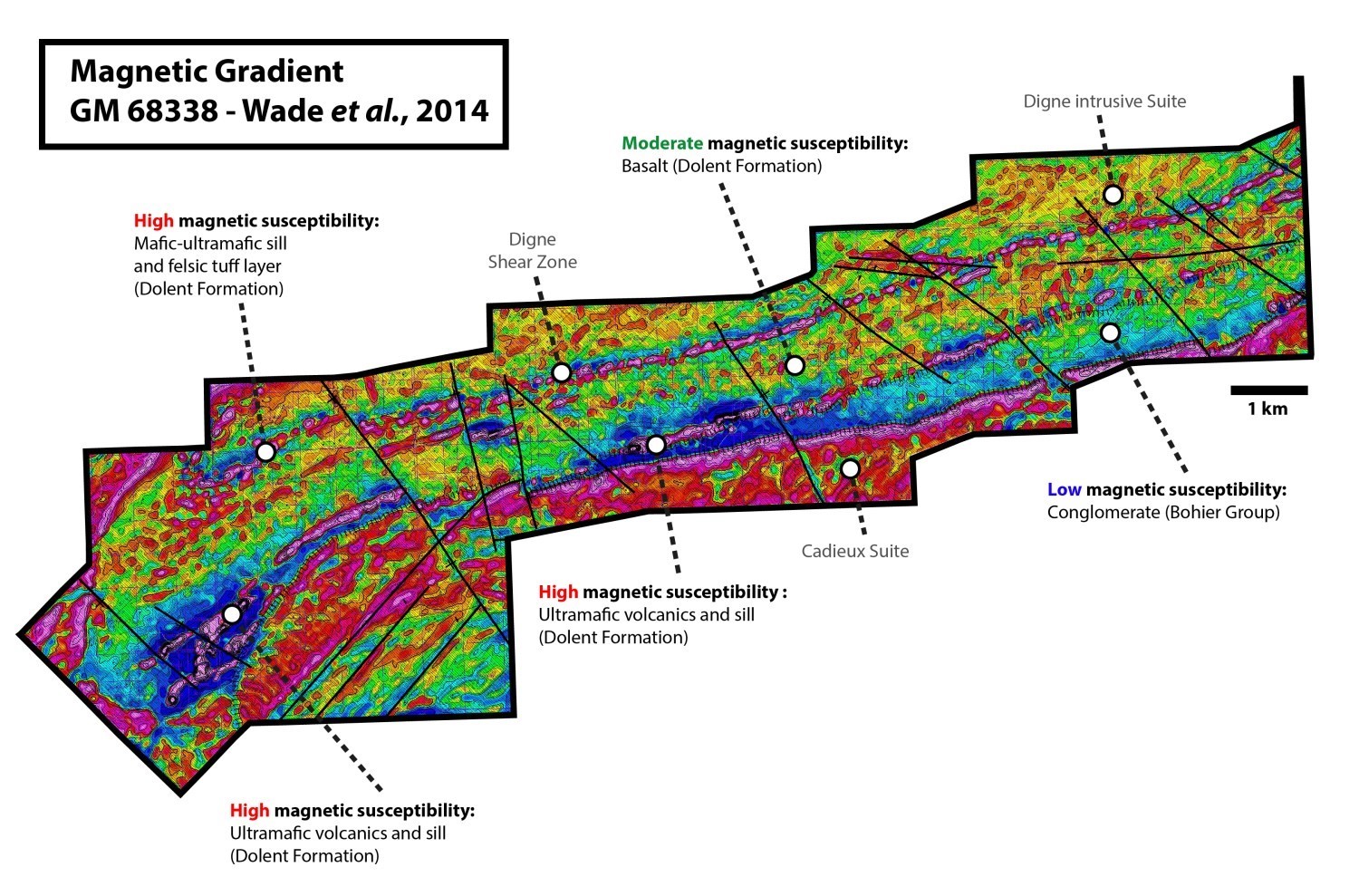