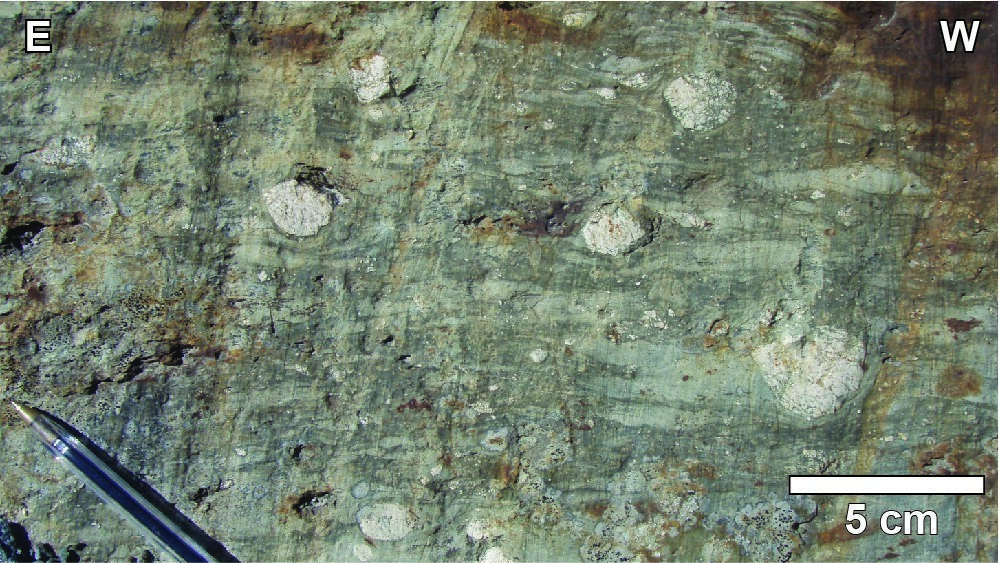 The Obatogamau Formation was established by Cimon (1977) in reference to the Obatogamau lakes located in NTS sheet 32G09. On the northern flank of the Chibougamau Anticline, basalt and andesitic basalt initially assigned to the lower portion of the Gilman Formation (Ludden et al., 1984; Daigneault and Allard, 1990) were grouped by Leclerc et al. (2008) in the David Member. However, by including the overlying Allard Member in the Waconichi Formation, the Gilman Formation was abandoned and the David Member was integrated into the Obatogamau Formation (Leclerc et al., 2011). 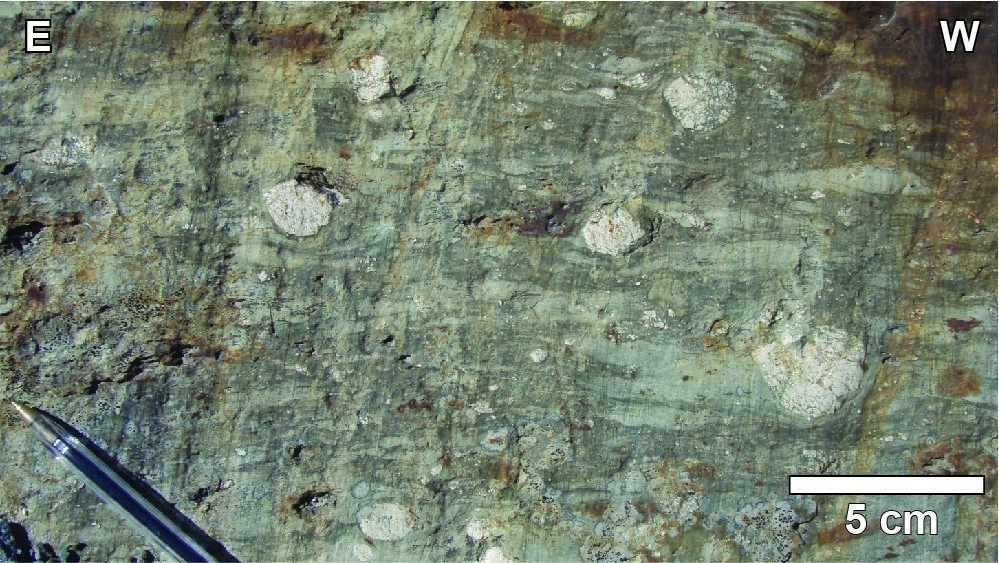 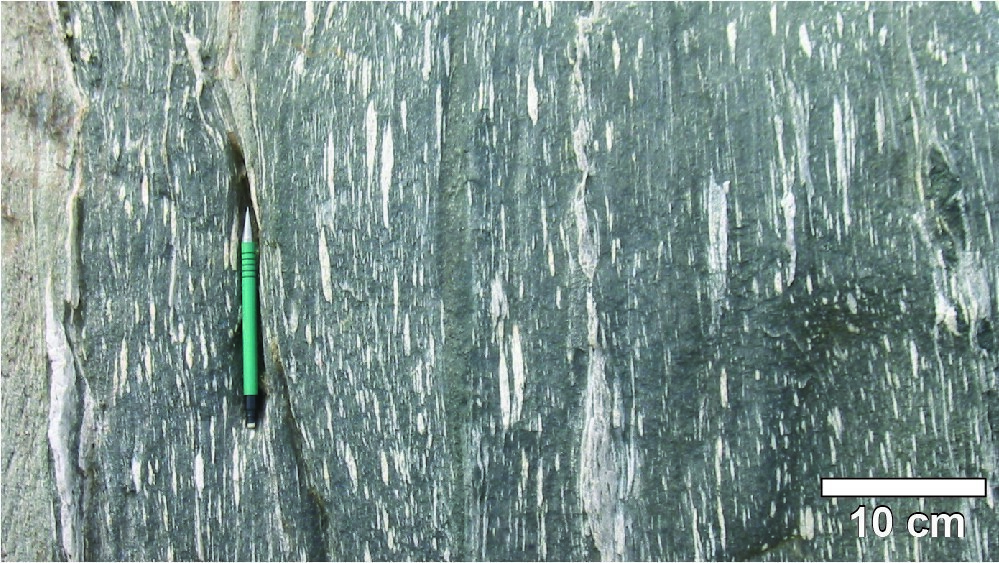 Massive, pillowed and brecciated basalts and andesitic basalts of the Obatogamau Formation are characterized by the common presence of plagioclase phenocrystals associated with the development of a glomerophyric texture. Massive and pillowed facies are the most common. The pillows’ long axis ranges from 10 to 40 cm, but can reach more than one metre in deformation corridors. They may contain millimetric ovoid carbonate-chlorite amygdules. The brecciated facies is scarce and characterized by angular fragments ranging in size from 1 to 5 cm. The rock is uniformly green in fresh exposure with beige phenocrystal clusters (glomerorphyric texture) up to 3 cm in diameter. The rock has a dark green to orange-brown patina in shear zones dominated by chlorite and ankerite alteration, while it is rather light green to beige in areas of abundant silica and epidote. Silification is associated with intense fracturing and the increased presence of millimetric quartz veinlets. In all cases, alteration accentuates the contour of primary structures (pillow margins, flow breccia fragments). In the Kapunapotagen and Gwillim deformation corridors, mafic volcanic rocks are transformed into chlorite-sericite ± ankerite schist. Intense deformation and alteration have partially obliterated primary structures. 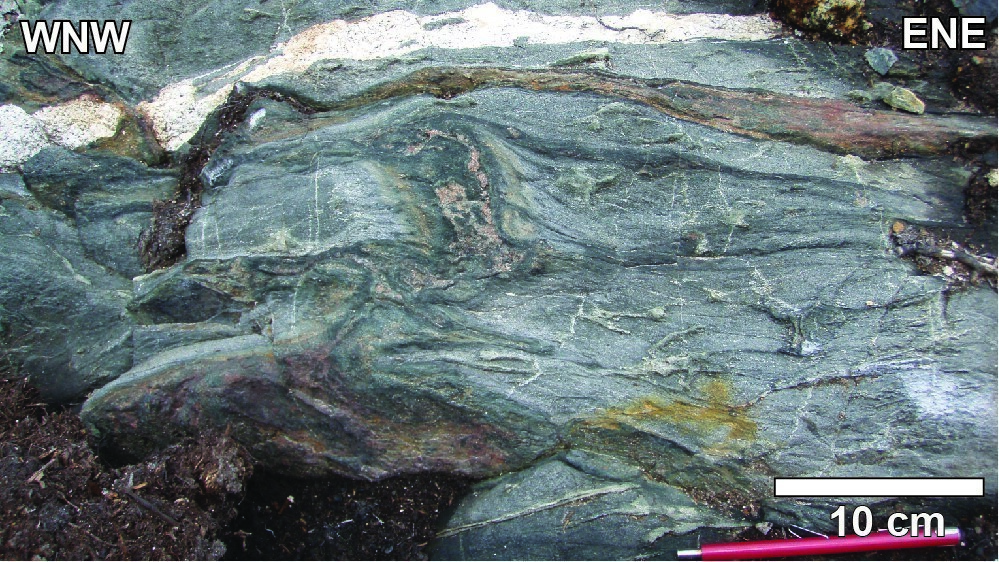 Garnet-clinopyroxene amphibolites (unit Aob1a) located in the Lac Dufresne Deformation Zone, on the western edge of the La Dauversière Pluton, are the metamorphozed equivalent of massive, pillowed and brecciated mafic volcanic rocks of unit nAob1. Primary structures are still recognizable but are affected by deformation and by local migmatitization. Garnet-clinopyroxene amphibolite enclaves within the La Dauversière Pluton are fine to medium grained and banded with alternating bands rich in mafic minerals (hornblende, garnet and clinopyroxene) or in plagioclase (Roy et al., 2005).

Some volcaniclastic rock lenses of mafic to intermediate composition and calc-alkaline affinity are interbedded between basalt and andesitic basalt flows. The size of beige to grey angular fragments does not exceed 4 mm (fine-lapilli tuff).

The Obatogamau Formation’s total thickness is estimated between 3 ﻿km to 4 km (Daigneault and Allard, 1990). Volcanic rocks of the Obatogamau Formation occupy the base of the stratigraphic pile in the area between Desmaraiville and Chibougamau (sheets 32G05-32G16, 32H13, 32J01-32J03), with the exception of localities where significantly older rocks are attributed to the Istotao Gneissic Complex (2831 ±5 Ma; Roffeis, in preparation), Vents Formation (2798.7 ±0.7 Ma; Davis et al., 2014) and Chrissie Formation (2791.4 +3.7/-2.9 Ma; David et al., 2011). According to Daigneault and Allard (1990), its setting environment corresponds to a submarine basalt plain.

None. The glomerorphyric texture and chemistry of mafic volcanic rocks of the Obatogamau Formation are very similar to those of anorthosites of the Lac Doré Intrusive Suite (2728.3 +1.2/-1.1 Ma and 2727.0 ±1.3 Ma; Mortensen, 1993), suggesting a similar source and contemporary emplacement (Daigneault and Allard, 1990).