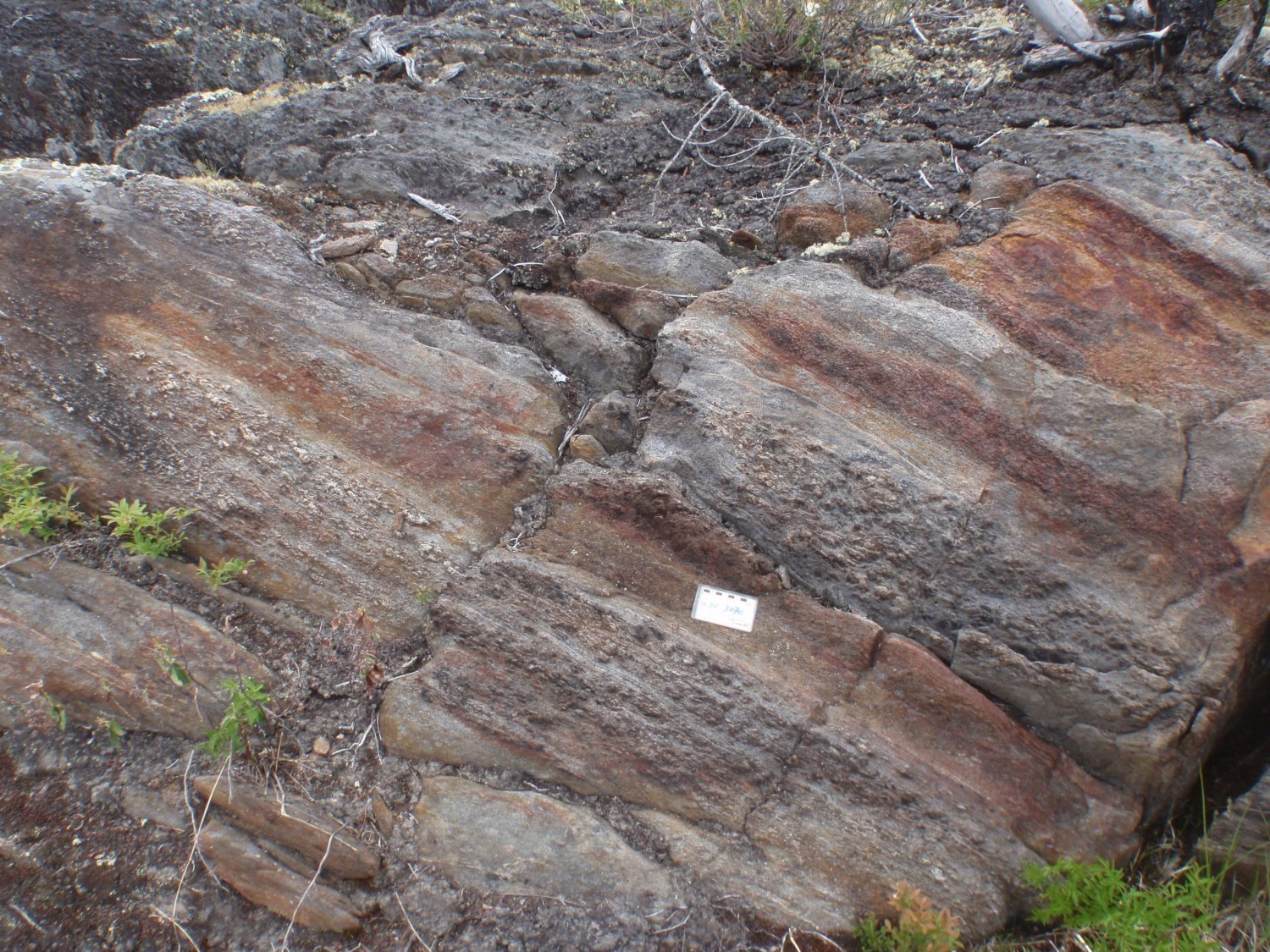 The first descriptions of these lithologies come from the works of Carlson (1962), Hashimoto (1962), Eakins et al. (1968), Bourne (1972), Remick and Ahmedali (1974), Valiquette (1975), Dubé (1978), and Franconi (1976, 1978, 1983). Simard and Gosselin (1999) later grouped rocks of this unit and metasedimentary rocks of the Opinaca Subprovince under the name “Laguiche Group”. The name Auclair Formation was introduced by Moukhsil and Doucet (1999) to describe a metasedimentary-dominated unit in the Village Lakes area (sheet 33B03), which is part of the Lower Eastmain River Volcano-Sedimentary Band (LERVB). The Auclair Formation is named after a former Hydro-Québec camp (Auclair Camp). It was then mapped by Moukhsil (2000), Moukhsil et al. (2001) and Moukhsil and Legault (2002) west of the Village Lakes area.

In the work of Moukhsil et al. (2003) on the geology of the Middle and Lower Eastmain Greenstone Belt (MLEGB), the Auclair Formation encompassed both paragneiss of the Opinaca and Nemiscau metasedimentary basins, as well as some of the Eastmain Group sedimentary formations in the La Grande Subprovince.

During subsequent synthesis and mapping work, some areas of the Auclair Formation were removed and redistributed to other units according to their respective subprovince. The migmatized paragneisses of the Opinaca Subprovince were reassigned to the Laguiche Complex (Bandyayera and Fliszár, 2007). The migmatized paragneisses of the Nemiscau Subprovince have been grouped under the name “Rupert Complex” (Bandyayera and Daoudene, 2018), while paragneisses in the Lac des Montagnes Belt were assigned to the Voirdye Formation (Bandyayera and Caron-Côté, 2019). The rocks belonging to the Auclair Formation south of the MLEGB, and mapped by Moukhsil (2000), Moukhsil et al. (2001) and Moukhsil and Legault (2002), were assigned to the Jolicoeur Complex in the context of the geological synthesis of the Nemiscau Subprovince (Bandyayera et al., 2022)

As a result, the Auclair Formation now encompasses only a portion of the sedimentary rocks of its original definition, limiting it to those spatially associated with the volcanic and volcaniclastic rock sequences of the Eastmain Group in the La Grande Subprovince. 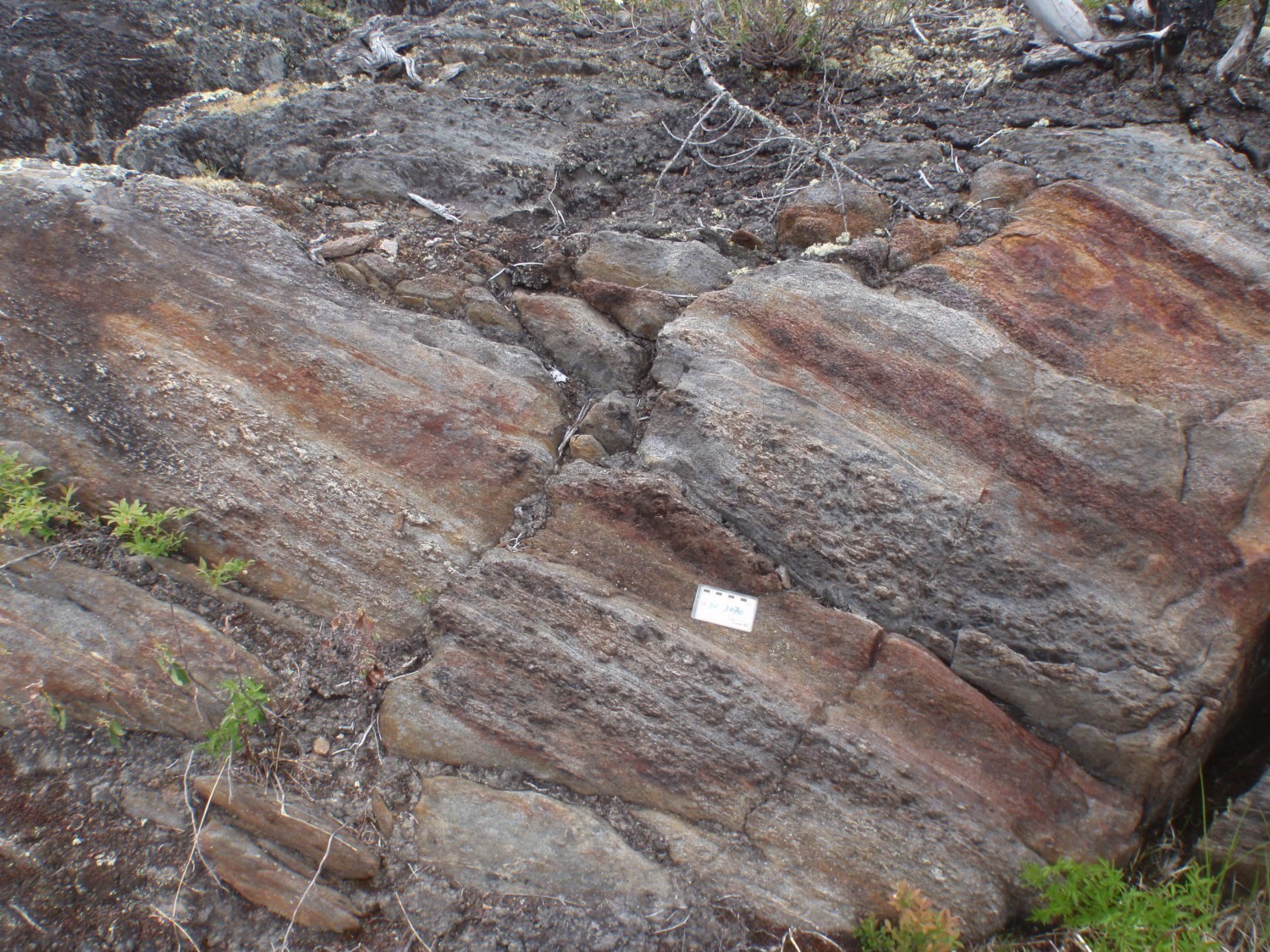 Unit nAai1 represents the main unit of the Auclair Formation. It consists essentially of a paragneiss with the following metamorphic mineral assemblages: (a) biotite-sillimanite-cordierite; (b) biotite-garnet-staurotide-kyanite-fibrous sillimanite; (c) biotite-garnet-staurotide-kyanite; (d) biotite-andalusite-garnet. However, these facies are very difficult to map as distinct lithological units (Moukhsil and Doucet, 1999; Moukhsil, 2000). Paragneiss is fine to medium grained, dark grey to bluish on a fresh surface and rusty brown on an altered surface. Its protolith is sedimentary and includes sandstone beds, argillaceous layers and feldspathic wacke (Moukhsil and Doucet, 1999). The rock has a porphyroblastic to interlobate granoblastic structure (Moukhsil, 2000). Porphyroblasts correspond to aluminosilicate nodules composed of cordierite, andalusite, staurotide or sillimanite. These nodules are in positive relief in outcrop and can be a few centimetres in diameter (Franconi, 1983; Moukhsil and Doucet, 1999). They highlight strong banding defined by alternating centimetric bands (20-30 cm) rich in aluminosilicates and bands lacking them (Franconi, 1983).

In the Village Lakes area, a few biotite paragneiss enclaves also show orthopyroxene. These rocks may have been removed from the Laguiche basin during the emplacement of the Village Batholith (Moukhsil and Doucet, 1999). 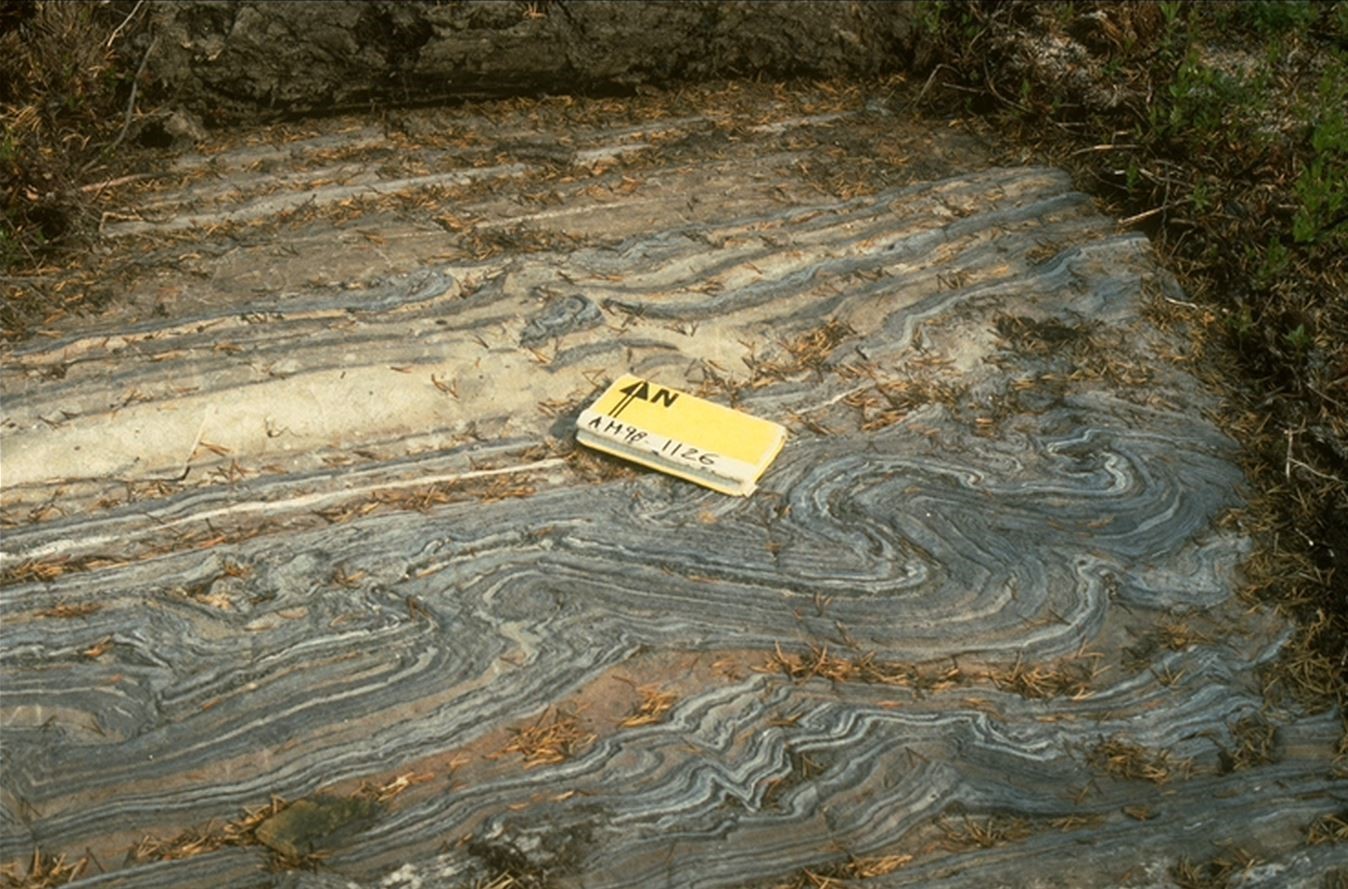 This unit consists of a few layers of andesite, rhyolite, rhyodacite and intermediate to felsic lapilli and block tuffs (Moukhsil and Doucet, 1999; Moukhsil, 2000). Lapilli tuffs form metre-thick layers with a dark grey alteration patina. They are fine grained, locally porphyritic and contain anhedral plagioclase phenocrysts (5-7%, 1-3 mm in diameter). Tuffs also contain up to 50% of small grains of sericitized plagioclase in the matrix (Moukhsil and Doucet, 1999). In thin section, the main minerals observed are quartz (35%), biotite (5%) and actinolite (8%). Quartz is polygonal. Brown biotite is anhedral and moderately to highly chloritized. Actinolite occurs as coarse subhedral to anhedral poikilitic grains. Accessory minerals are epidote (1%) and small angular grains of opaque minerals (1%). Tuffs are deformed and the schistosity is highlighted by the alignment of biotite and actinolite (Moukhsil and Doucet, 1999). 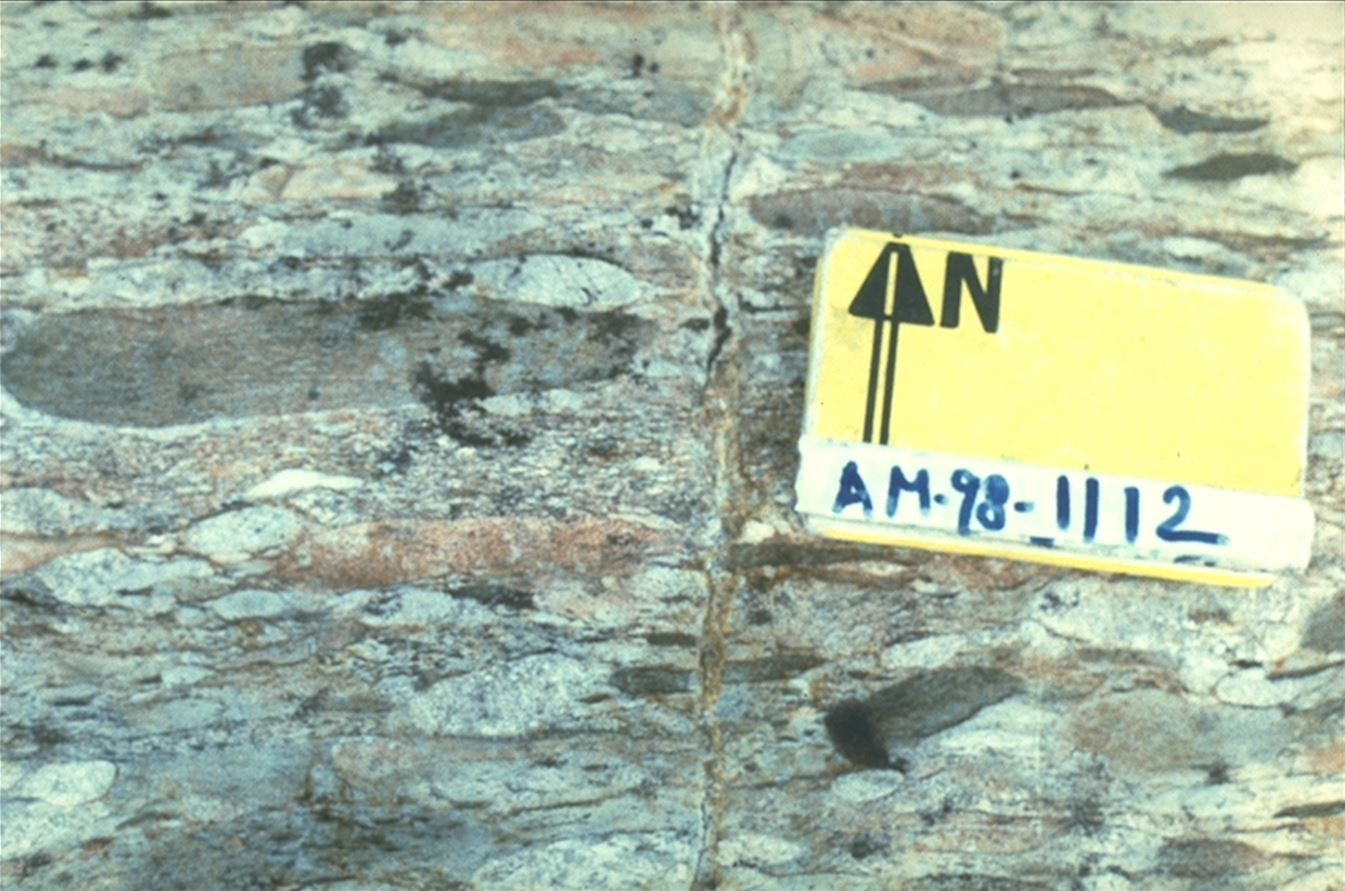 This unit is not very widespread and is usually located along volcanic packages (Franconi, 1983). The stratigraphic position of this unit appears ambiguous. Moukhsil and Doucet (1999) mention that the conglomerate occupies the summital part of the Auclair Formation. Nevertheless, they note that the Auclair Formation stratigraphically overlies the Natel Formation, which is supported by polarities towards the NE observed in the field. Conglomerates are located at the interface of the Natel and Auclair formations, suggesting that they would instead correspond to basal conglomerates.

The Auclair Formation extends discontinuously over ~150 km in the MLEGB. The largest mass belonging to this formation is found in the Village lakes area (sheet 33B03; Moukhsil and Doucet, 1999) and to a lesser extent in adjacent sheets 33B04, 32O14 and 33B02. In this area, the Auclair Formation forms a strongly arcuate strip, the convexity of which points to the ENE. This strip reaches a length of 35 km by an average width of 6 km. A solitary ovoid mass 4 km long, with a particularly complex structure, is present in sheet 33B02. It is distinguished by its strong magnetic contrast due to the presence of unit nAai2.

According to Franconi (1978), the thickness of Auclair Formation paragneiss is not very large and possibly duplicated by folding.

The Auclair Formation corresponds to the youngest period of Archean sedimentary activity in the MLEGB (Boily and Moukhsil, 2003; Moukhsil et al., 2003). It is interpreted by Moukhsil et al. (2003) as part of the second period of sedimentation of the MLEGB. It is possible that the Auclair Formation is the same age as the uppermost part of the Wabamisk Formation and the Anaconda and Clarkie formations, corresponding to the first period of sedimentation of the MLEGB.

Several post-tectonic to late-tectonic intrusions, such as the Pacific Intrusive Suite, cut the Auclair Formation (Moukhsil and Doucet, 1999; Moukhsil et al., 2003; Côté-Roberge et al., 2021). Small masses of syntectonic to late-tectonic gabbro, belonging to the Moyenne Eastmain Gabbro and Diorite unit, are also intruding into the metasedimentary rocks of the Auclair Formation (Moukhsil, 2000; Moukhsil and Legault, 2002).