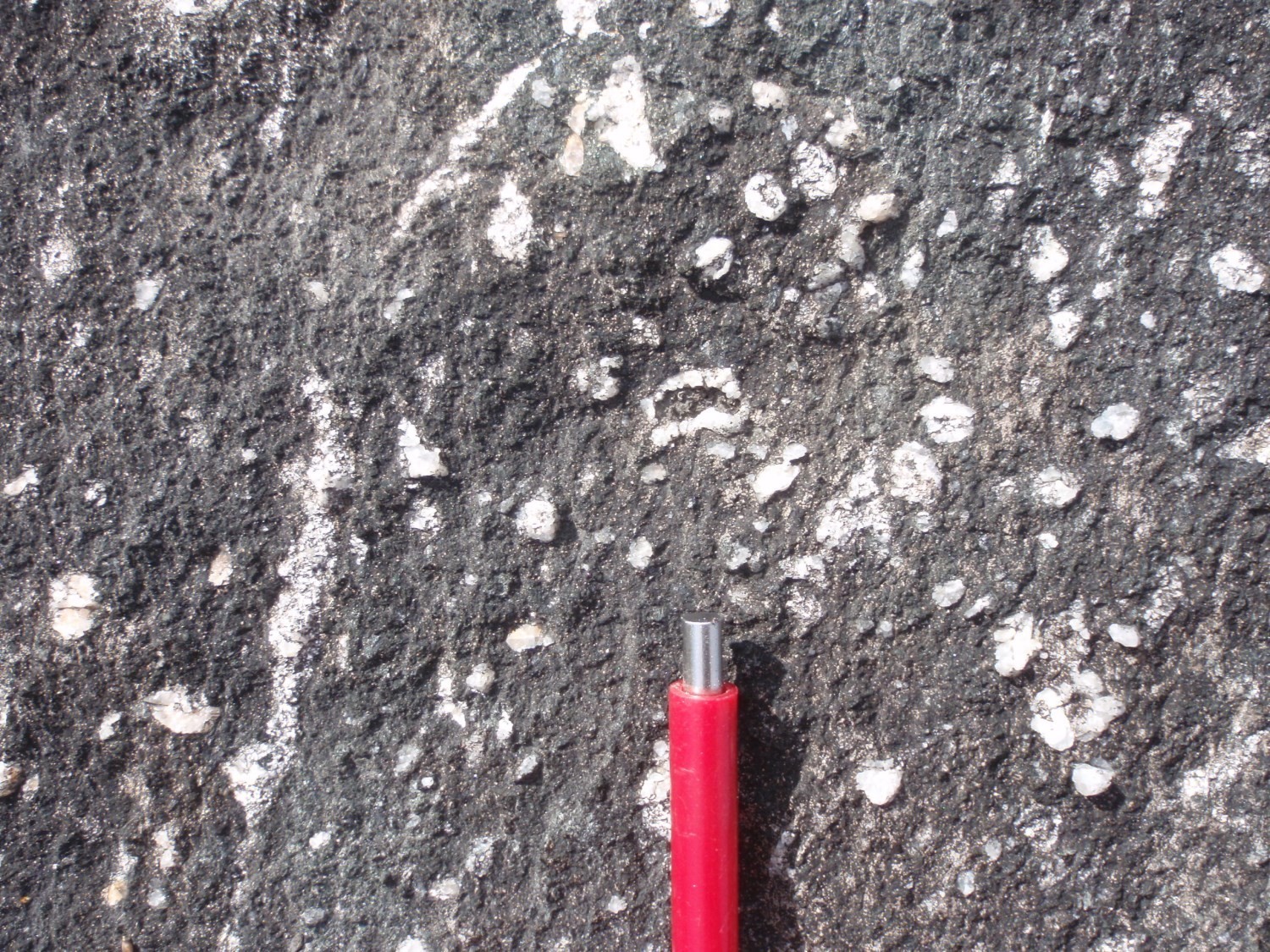 Franconi (1978) first used the term “Anatacau-Pivert Bench” to describe a basalt sequence in the Anatacau (NTS sheet 32C02) and Pivert (sheet 32C08) lakes region in the Lower Eastmain River Volcanic Band (LERVB). The work of Moukhsil (2000) helped to define and formalize this volcano-sedimentary sequence, which the author referred to as the Anatacau-Pivert Formation. This unit is interpreted as part of the LERVB third volcanic cycle, which is between 2723 and 2705 Ma (Moukhsil et al., 2001, 2002). 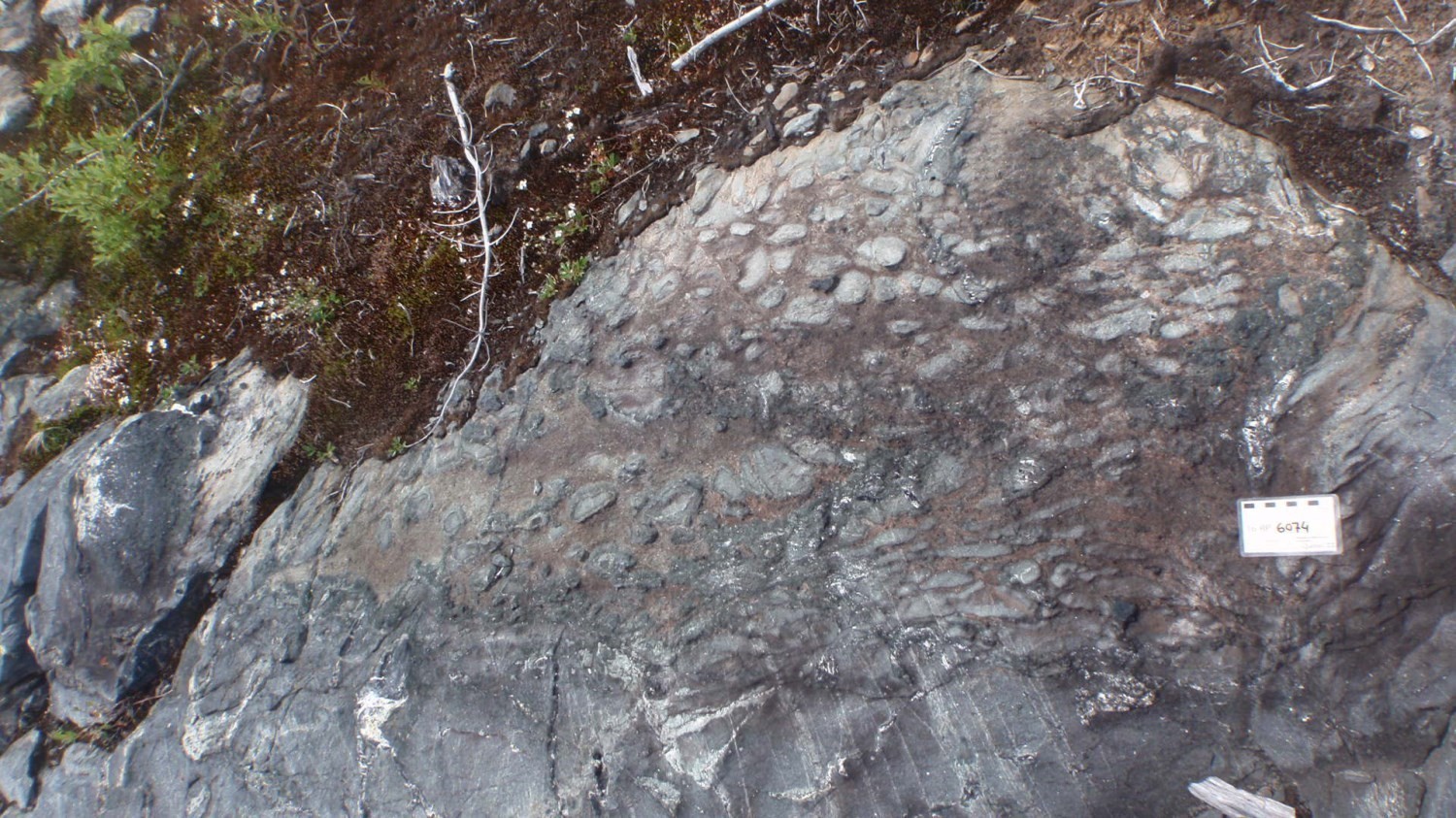 Unit nAnp1 consists of fine-grained metabasalt grey-green in altered surface and greyish green in fresh exposure. These rocks are composed of massive to pillow flows, locally brecciated and usually amygdaloidal. Pillow basalt represents more than 60% of unit nAnp1. Decimetric to metric pillows are deformed and flattened, showing amphibolitized hyaloclastic margins. In places, basalt flows alternate from massive to pillowed. Metric horizons of brecciated lava are associated with these two facies. Amygdules are widespread and make up 20% of the rock in places. They are filled with quartz or plagioclase and have a stretch or flattened appearance. Under the microscope, basalt shows a nematoblastic to granoblastic texture. Green hornblende is the dominant mineral and constitutes 60 to 80% of the rock. Partially to completely sericitized plagioclase (30-40%) is recrystallized (granoblastic). Biotite (2%) is partially chloritized. Accessory minerals are apatite, zircon, titanite, epidote, carbonates and opaque minerals. 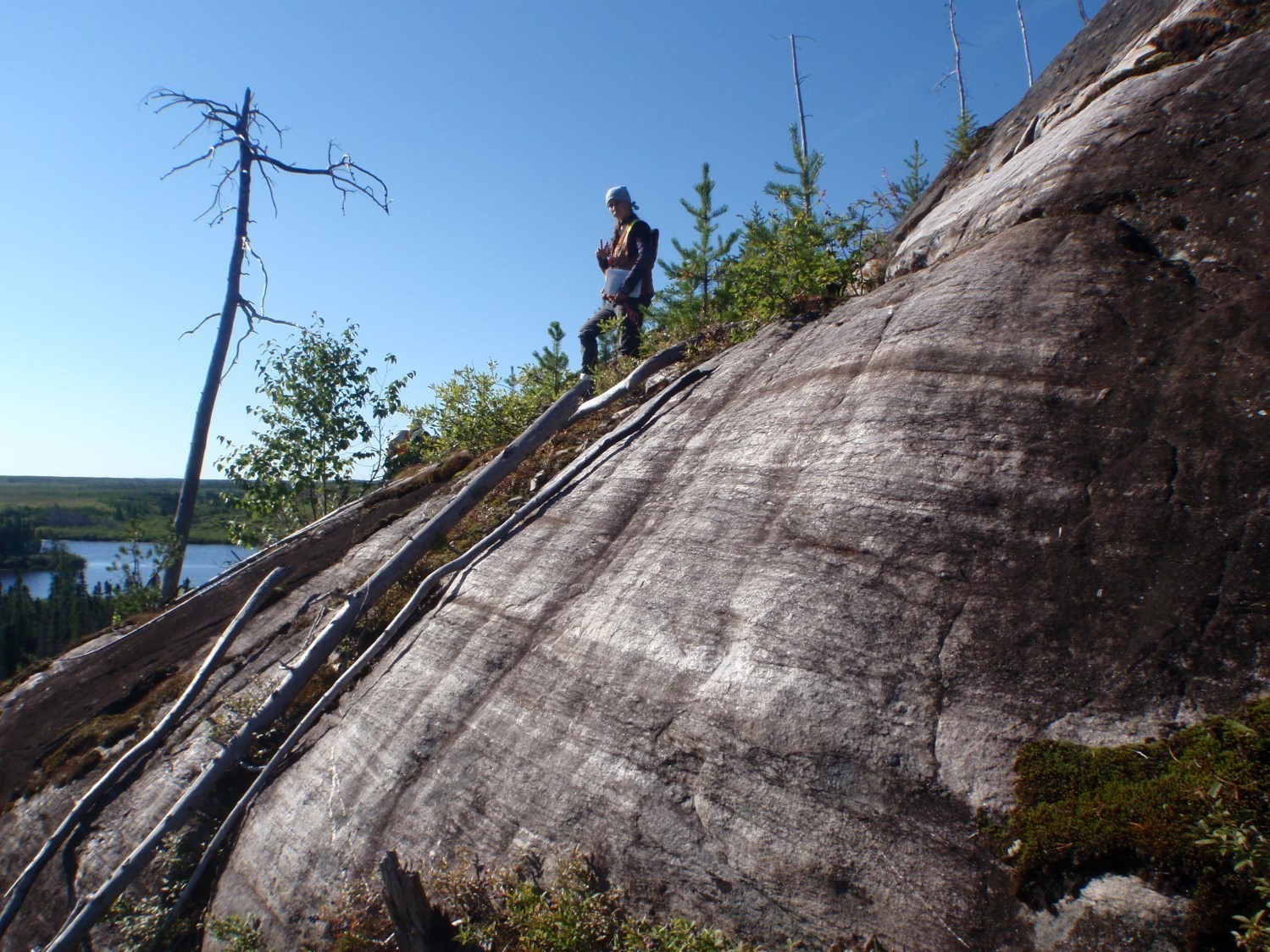 Low-thickness mafic or ultramafic sills have also been incorporated into this unit. Horizons of strongly altered garnet-rich amphibolite (up to 30%) are observed throughout the basaltic unit. Small horizons of paragneiss 15 to 40 cm thick are also interbedded in the basaltic sequence. These metasediments are generally medium-grained and contain up to 10% garnet as crystals of 2 to 5 mm. In places, the proportion of garnet is 50%, which suggests hydrothermal alteration. Some metasediment lenses also contain cordierite porphyroblasts (5%). The metabasalt sequence also includes metric to decametric (locally centimetric) horizons of ash tuffs and lapilli tuffs. These rocks contain up to 80% plagioclase and 5 to 20% quartz pheoncrystals and show muscovite alteration (sericite).

Unit nAnp2 is interstratified with the nAnp1 unit. It outcrops in the Kaministikuch Lake area (sheet 33C01) where it was described by Franconi (1978). The unit consists of amphibolite with 10% garnet porphyroblast 1 to 3 cm in diameter. Remains of pillows are still recognizable. Under the microscope, the rock contains 70-80% hornblende, 10% garnet, 10% plagioclase and 2% quartz. Accessory minerals are biotite and tourmaline.

Unit nAnp3 consists of sparse horizons of andesitic lava, locally amygdaloidal. In the field, it is difficult to differentiate between basaltic lava (unit nAnp1) and andesitic lava (unit nAnp2) due to metamorphism and strong alteration of the rock. The composition of these volcanics was confirmed by lithogeochemical analyses. Andesite contains up to 15% magnetite and is associated with horizons of iron formation at the oxide facies (unit nAnp5). Under the microscope, andesite shows a trachytic texture associated with the preferential orientation of plagioclase microlites.

Unit nAnp4 consists of massive rhyolite and rhyodacite that outcrop on sheets 33C01 and 33C02. These rocks are silicified, chloritized and sericitized. 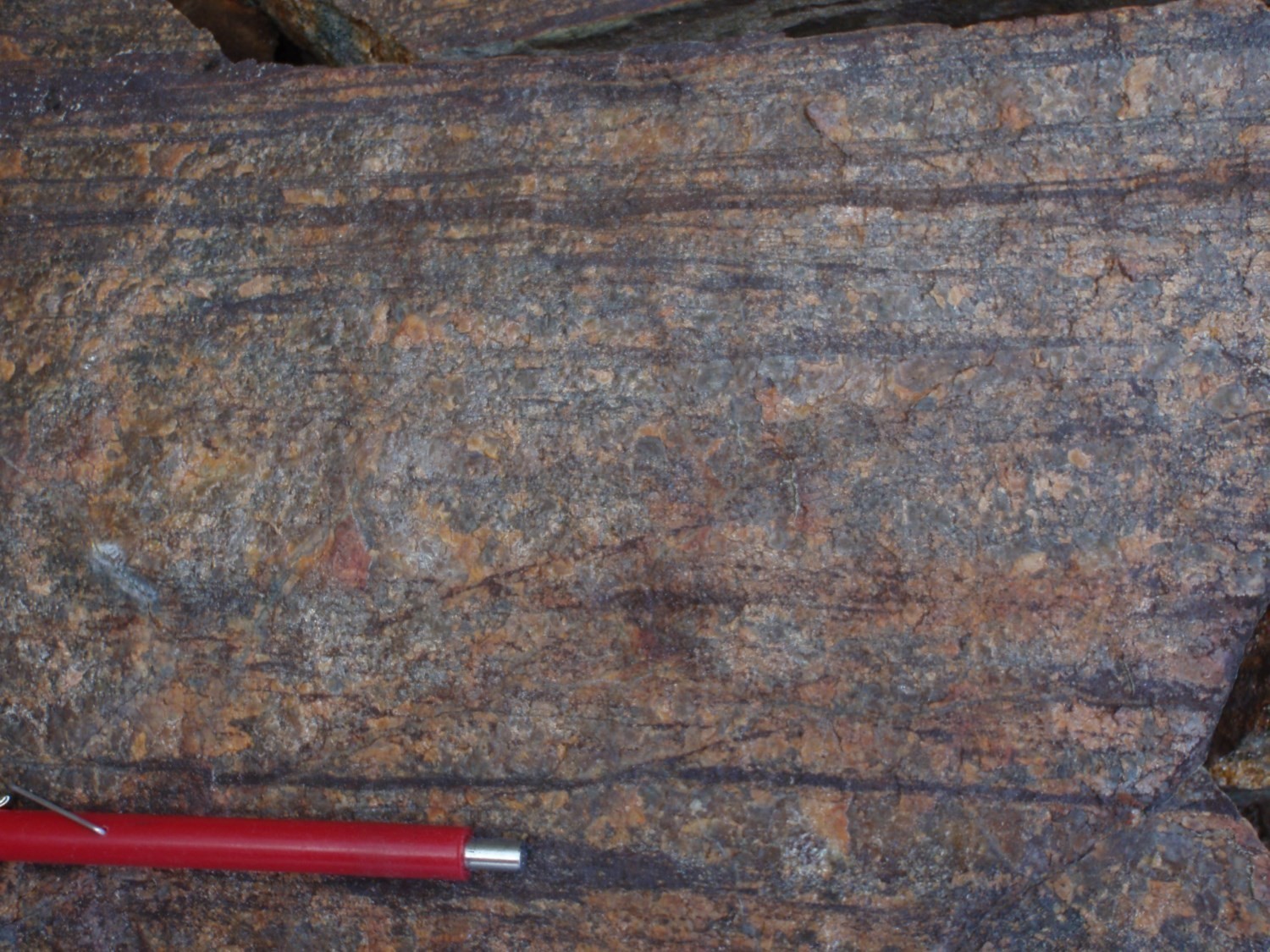 Unit nAnp5 consists mainly of iron formations at the oxide facies and, locally, at the silicate facies. Sulphidic chert horizons have also been integrated into this unit. Aeromagnetic maps highlight this unit with high magnetic susceptibility. Unit nAnp5 is interbedded in mafic volcanics of units Anp1 and Anp2. The thickness of these units varies from a few metres to about 30 metres. They display banding materialized by alternating magnetite beds, recrystallized brecciated chert ribbons or centimetric bands of metasediment. 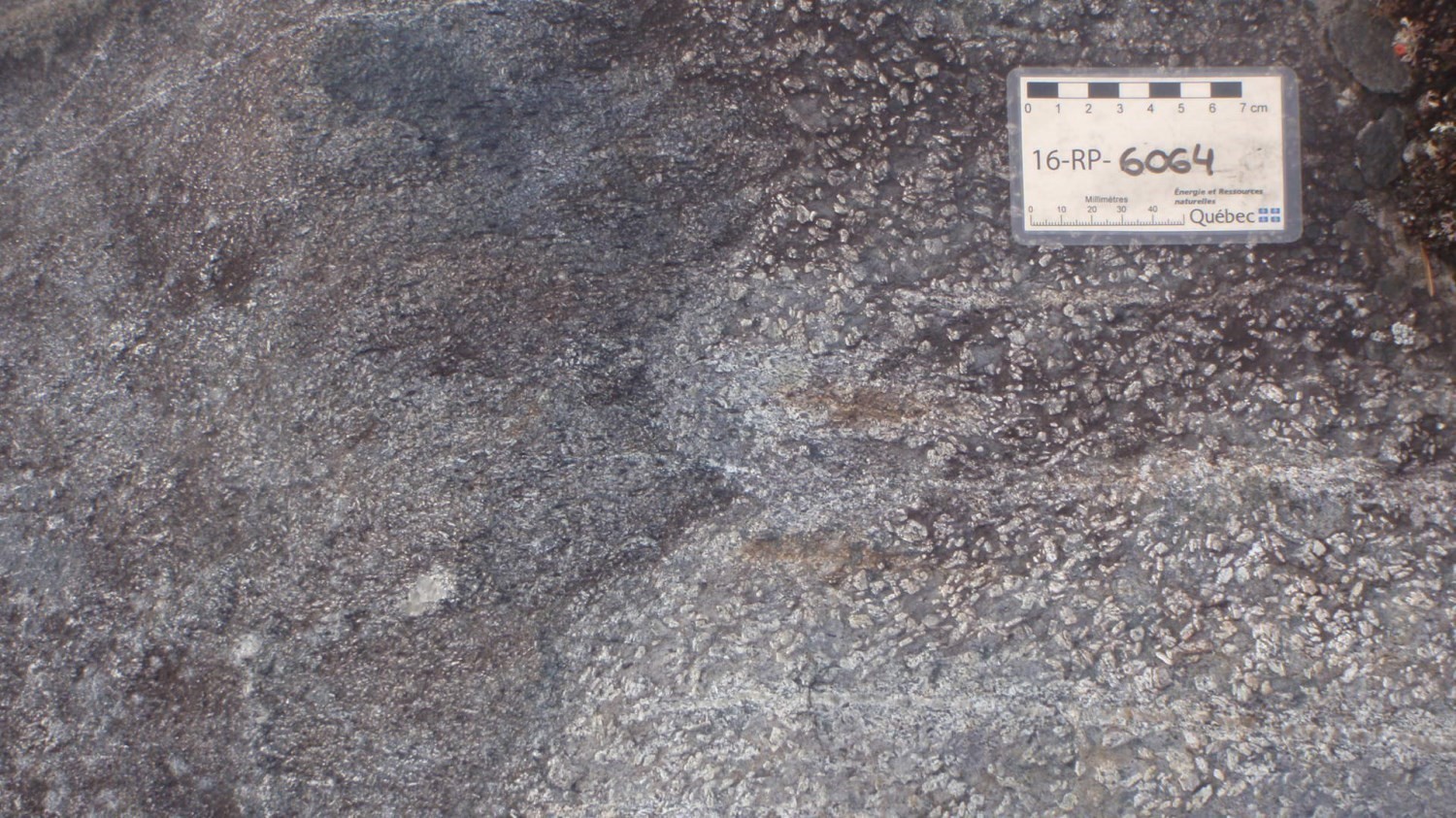 Unit nAnp6 forms discontinuous horizons within the nAnp1 unit or in contact between the nAnp1 unit and the sedimentary sequence of the nAnp7 unit. It is composed of lapilli or block volcanoclastics (tuffs) of felsic to intermediate composition, locally mafic. Some horizons consist of only andesitic tuffs. Felsic tuffs contain about 60% felsic fragments and show strong alteration in chlorite and sericite. Some felsic horizons have quartz and plagioclase phenocrystals 0.3 to 0.7 mm in diameter. Lithic fragments are recrystallized and generally stretched and flattened parallel to schistosity. Intermediate tuffs contain horizons of trachytic texture andesite that are characterized by the presence of plagioclase phenocrystals. These rocks are granoblastic to lepidoblastic, locally banded.

Unit nAnp7 was added to the Anatacau-Pivert Formation,﻿ and not to the Auclair Formation of the Nemiscau Subprovince,﻿ due to its close association with volcanic rocks, exceptional preservation of primary structures and low metamorphic facies (Moukhsil, 2000). It consists of siltslate, mudstone and conglomerate horizons. Siltslate and mudslate show an interlocked hemigranoblastic texture. Some of the outcrops in this unit show well-preserved S0 stratification, characterized by alternating more or less fine beds with biotite, greenish chlorite, quartz and muscovite.

Microscopic analysis shows that the rock is composed of quartz (up to 55%), plagioclase (11%), biotite (23%) and muscovite (15%). Accessory minerals are hornblende, chlorite, apatite, zircon, sericite, tourmaline, carbonates and opaque minerals. In places, carbonates form areas 0.20 to 0.50 mm in diameter.