The name “Voirdye Formation” was introduced by Bandyayera and Caron-Côté (2019) following the Ministère’s fieldwork in the summer of 2018. First descriptions of the lithologies belonging to the Voirdye Formation came from Valiquette (1975). In the early 2000s, these sedimentary rocks were assigned to the “Rupert Group” when they were compiled in the Geomining Information System (SIGÉOM). This group was introduced to describe all metasedimentary rocks in the Nemiscau Subprovince. Bandyayera and Daoudene (2018) formalized this unit and renamed it “Rupert Complex”. Bandyayera and Caron-Côté (2019) reassigned Rupert Complex rocks located between Nemiscau Lake and in the vicinity of Glas Lake to the Voirdye Formation. This reassignment was done since Voirdye Formation rocks show preserved primary sedimentary structures and are much less migmatized than those of the Rupert Complex.

The Voirdye Formation is a metasedimentary unit consisting mainly of paragneiss derived from wacke and arenite (nAvrd2). It also contains lesser amounts of, in order of importance: quartzite (nAvrd3), iron formation (nAvrd4), metasomatic rocks (nAvrd5) and conglomerate (nAvrd1). This formation represents the main unit in the eastern part of the Nemiscau Subprovince, east of the Champion Lake area. No formal stratigraphy has yet been established, but in the type area (around Voirdye Lake), the conglomerate unit (nAvrd1) appears to be overlain by metasomatic rocks (nAvrd5), quartzite (nAvrd3), and finally paragneiss derived from wacke and arenite (nAvrd2).

Conglomerate is observed very locally. It tends to be located near deformation zones. Conglomerates are polymictic and contain mafic and felsic clasts. Clasts are mostly supported by the matrix and locally joint. They are usually subrounded, stretched and centimetric to decimetric. The matrix varies from quartzofeldspathic to micaceous depending on outcrops and the intensity of deformation. On highly deformed outcrops, it is generally composed of biotite. 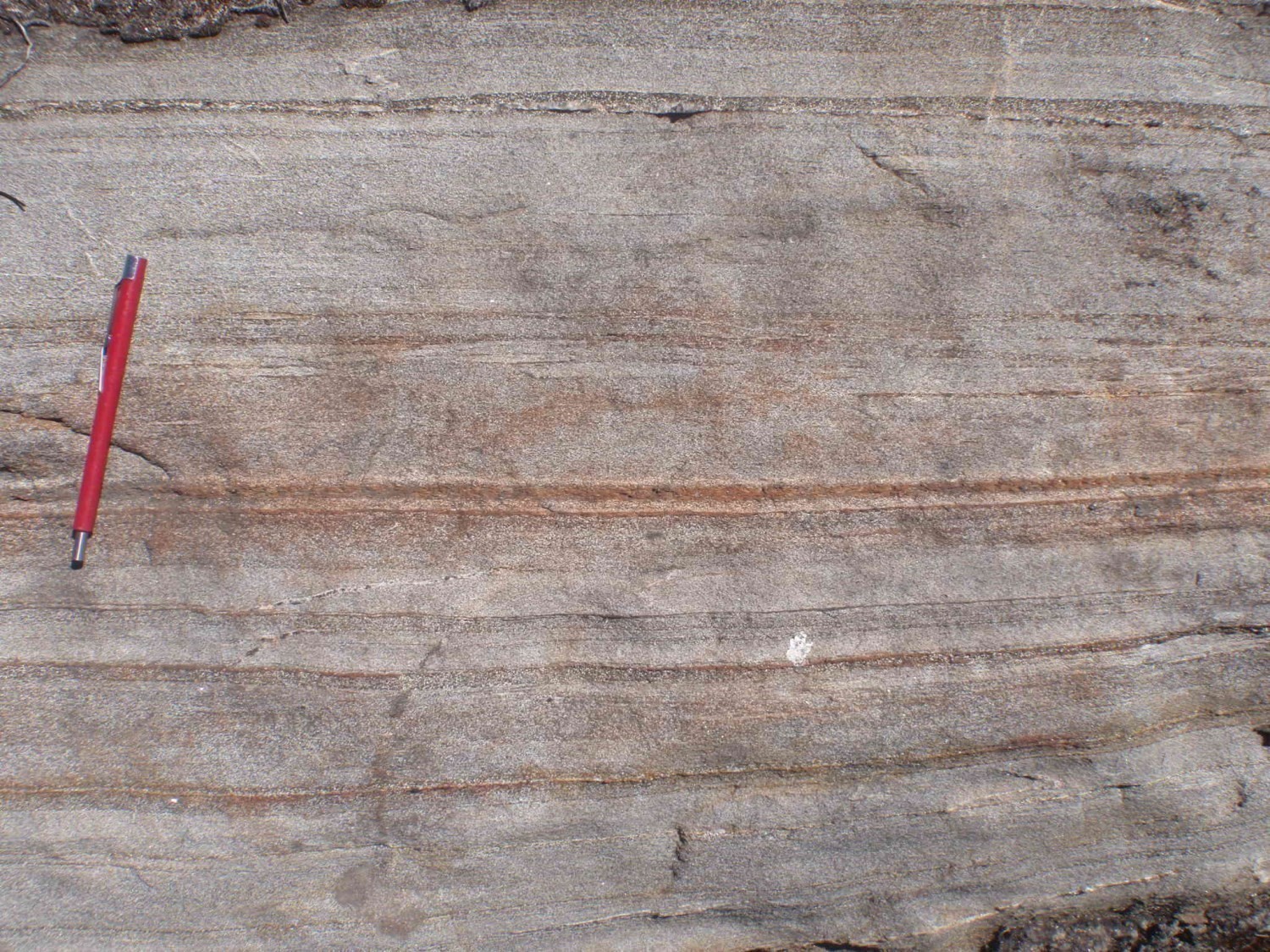 Unit nAvrd2 consists of biotite±garnet paragneiss usually derived from wacke and more locally from arenite. Wacke-derived paragneiss is grey in fresh exposure and medium to light-medium brownish grey in altered surface. It is generally homogeneous and foliated. It is mostly fine grained and locally medium grained. Centimetre to decimetre-thick, locally metre-thick, sedimentary bedding and millimetre-thick laminate structure are observed in several locations. Locally there is normal sorting associated with an increase in biotite content from the base to the top. This paragneiss contains 20 to 35% biotite (0.5-5 mm) and trace to 5% garnet (1-3 mm). Decimetric to metric horizons of paragneiss derived from arenite are interstratified with wacke. They are distinguished from wacke by their lighter colour and lower content in biotite and garnet. They are medium to light-medium grey in fresh exposure and light-medium brownish grey in patina. They contain 5 to 15% biotite (0.5-1 mm) and traces of garnet locally. 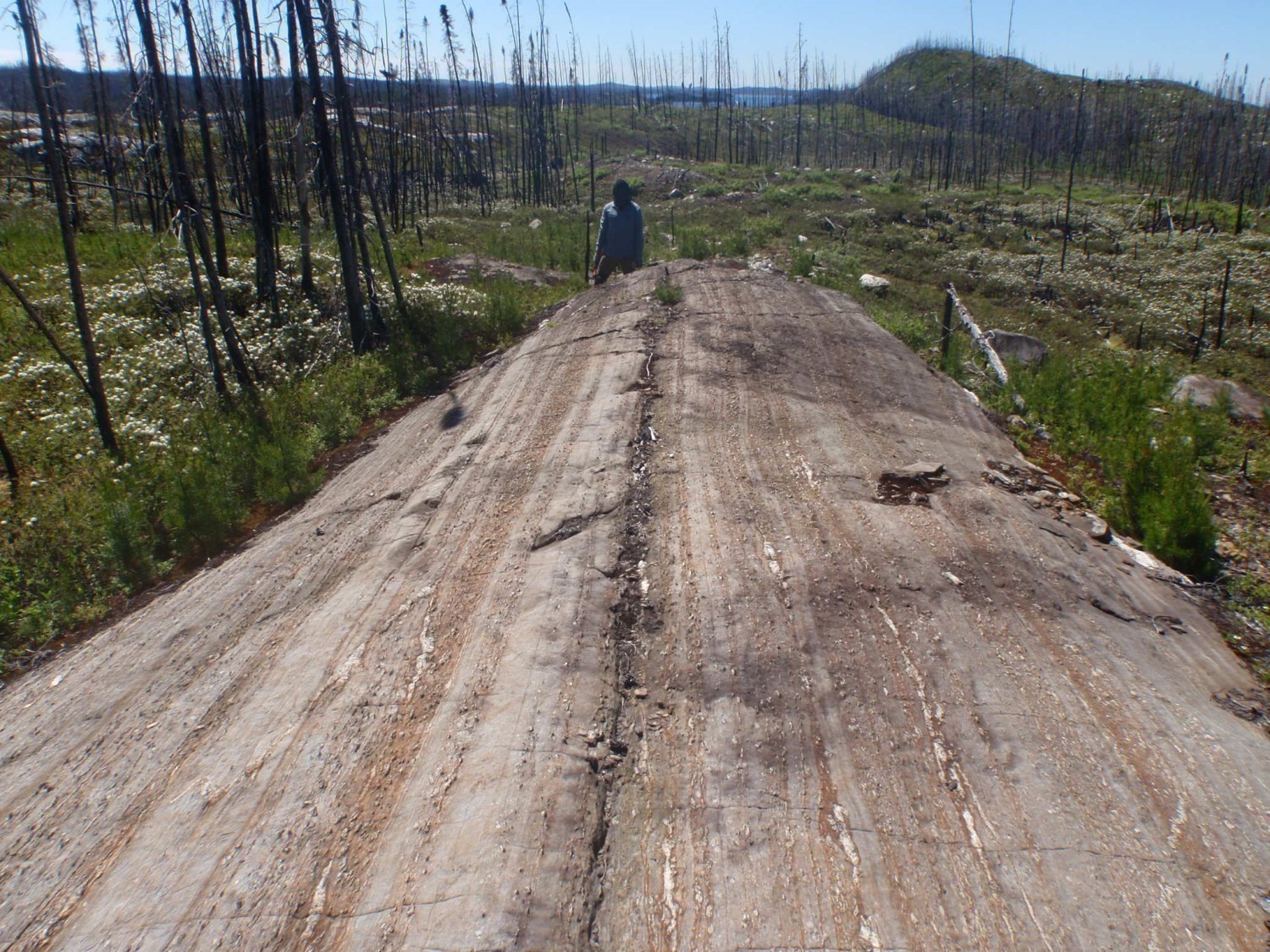 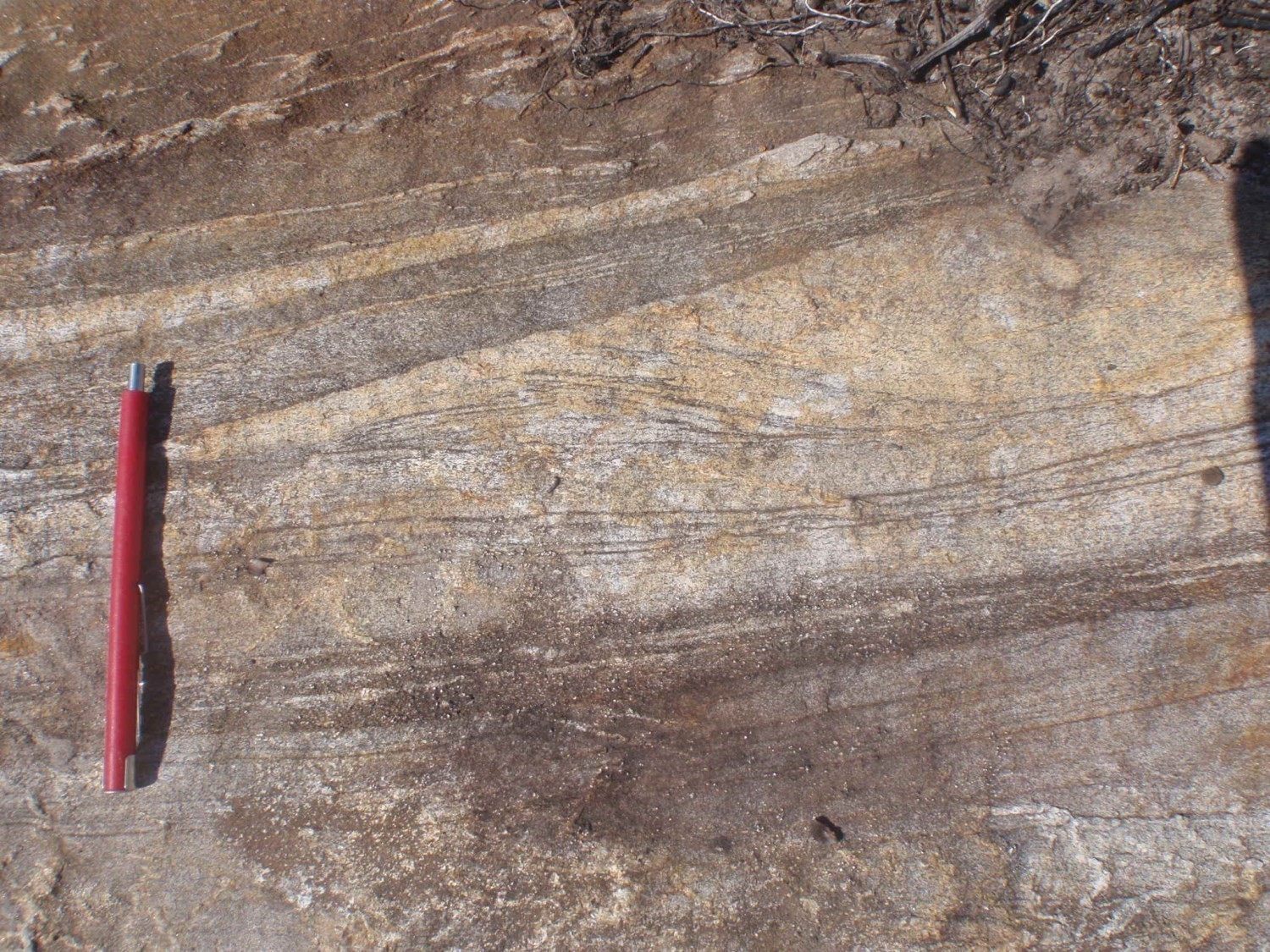 In outcrop, decimetre to metre-thick primary bedding showing mineralogical variations is observed in several locations. There are beds of cordierite±sillimanite porphyroblastic wacke, interstratified with arenite beds that are poorer in accessory minerals. Sedimentary structures are locally observed, such as oblique laminations and cross-bedding. 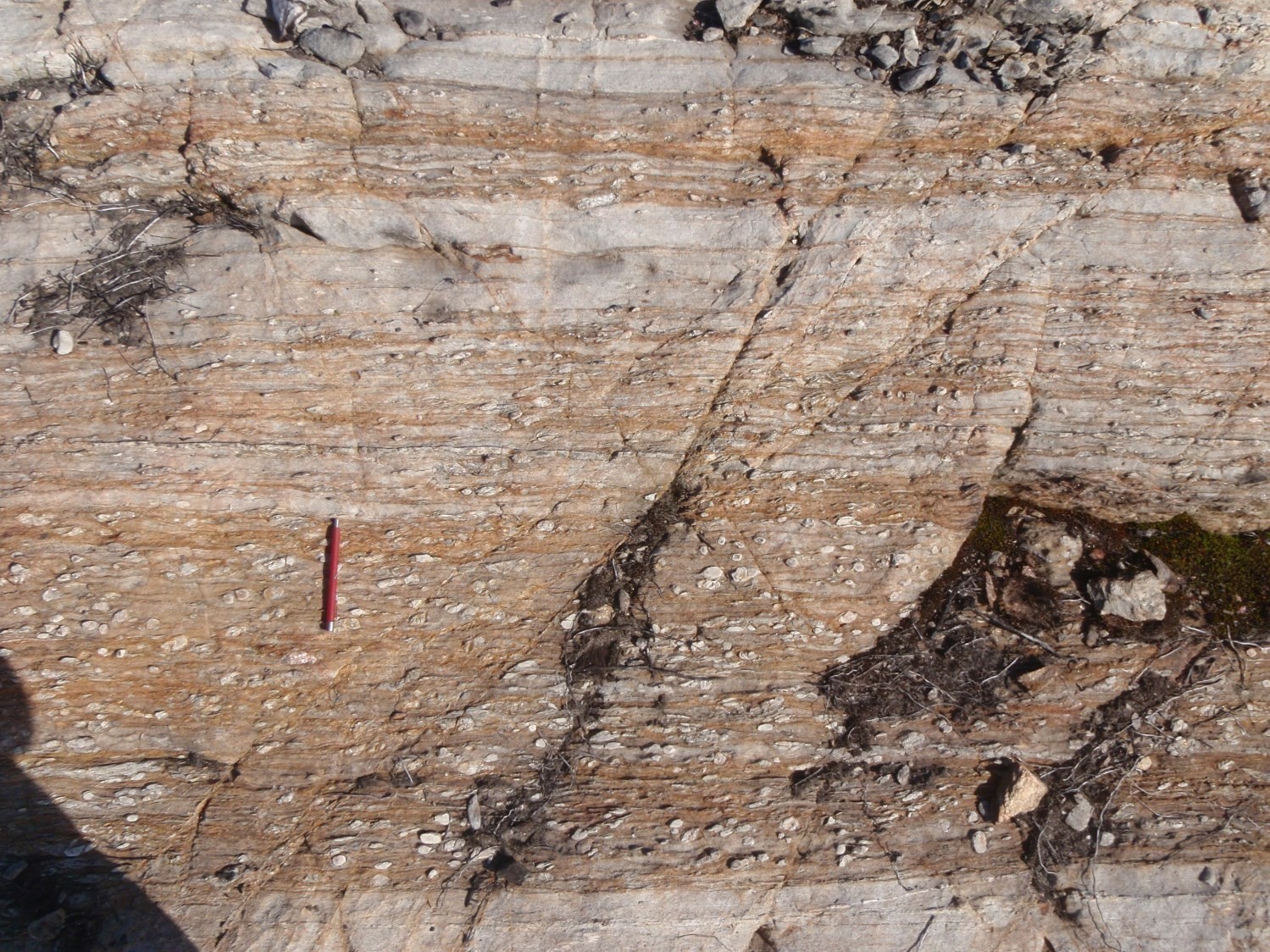 Paragneiss derived from wacke is fine grained and locally medium grained. It is foliated, locally laminated and generally homogeneous. It is medium to medium-dark brownish grey in patina and grey in fresh exposure. It contains 25 to 35% biotite (0.5-2 mm). Aluminosilicate porphyroblasts are sillimanite and cordierite, which vary in diameter from 2 to 20 mm and account for 25 to 40% of the rock. These porphyroblasts are generally found in positive relief at the surface of altered outcrops and mark the rock’s stretch lineation. Wacke also contains 1 to 5% garnet (1-3 mm) in several places. Locally, normal sorting is observed, where the biotite and aluminosilicate contents increase from the base to the top.

Paragneiss derived from arenite is, like wacke, fine grained, foliated and generally homogeneous. It is distinguished from wacke by a lower abundance of accessory minerals. It is light-medium to light brownish grey in patina and grey in fresh exposure. It generally contains 5 to 15% biotite (0.5-2 mm). It also contains 1 to 2% garnet (1-3 mm) in several places. 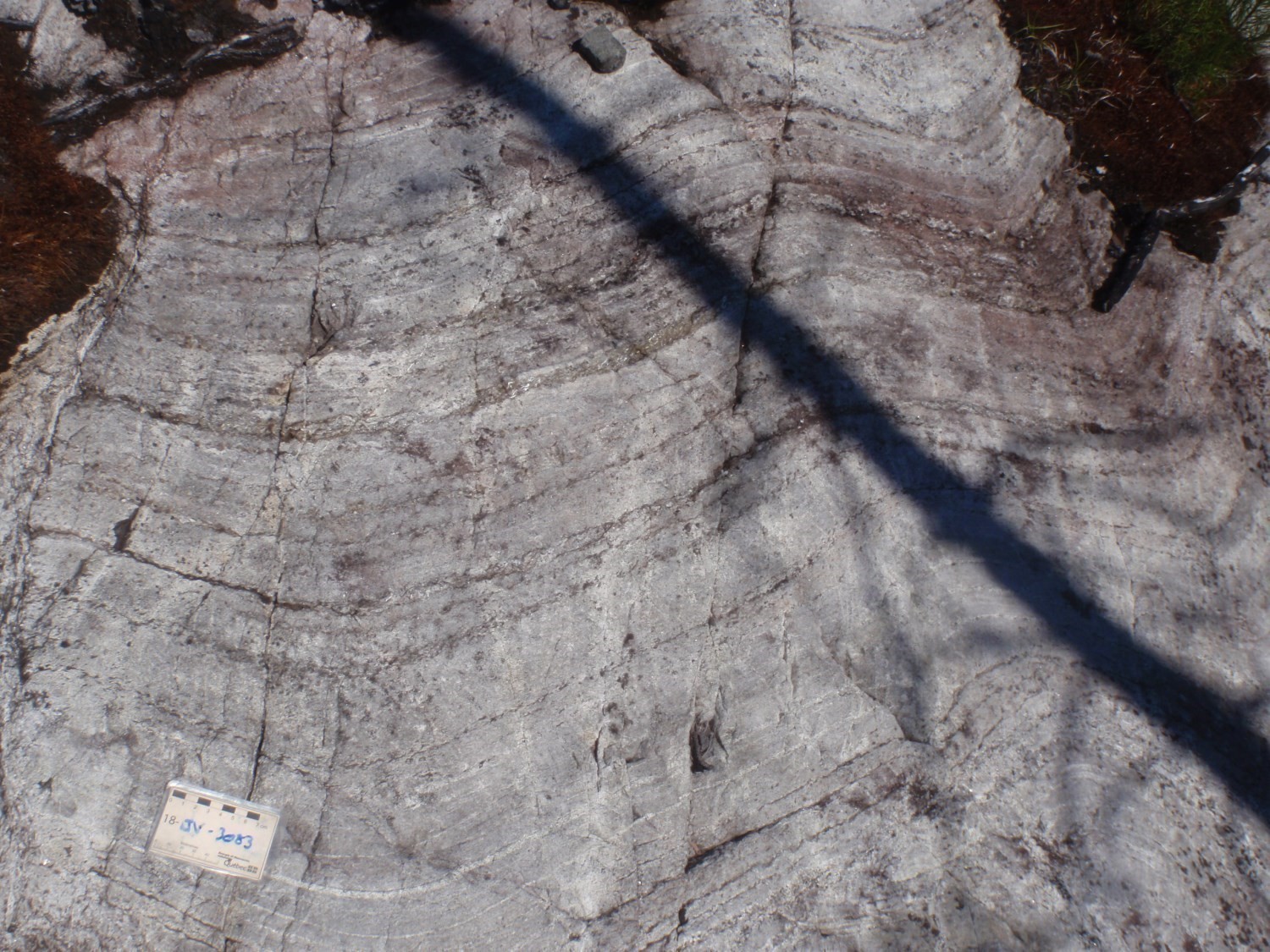 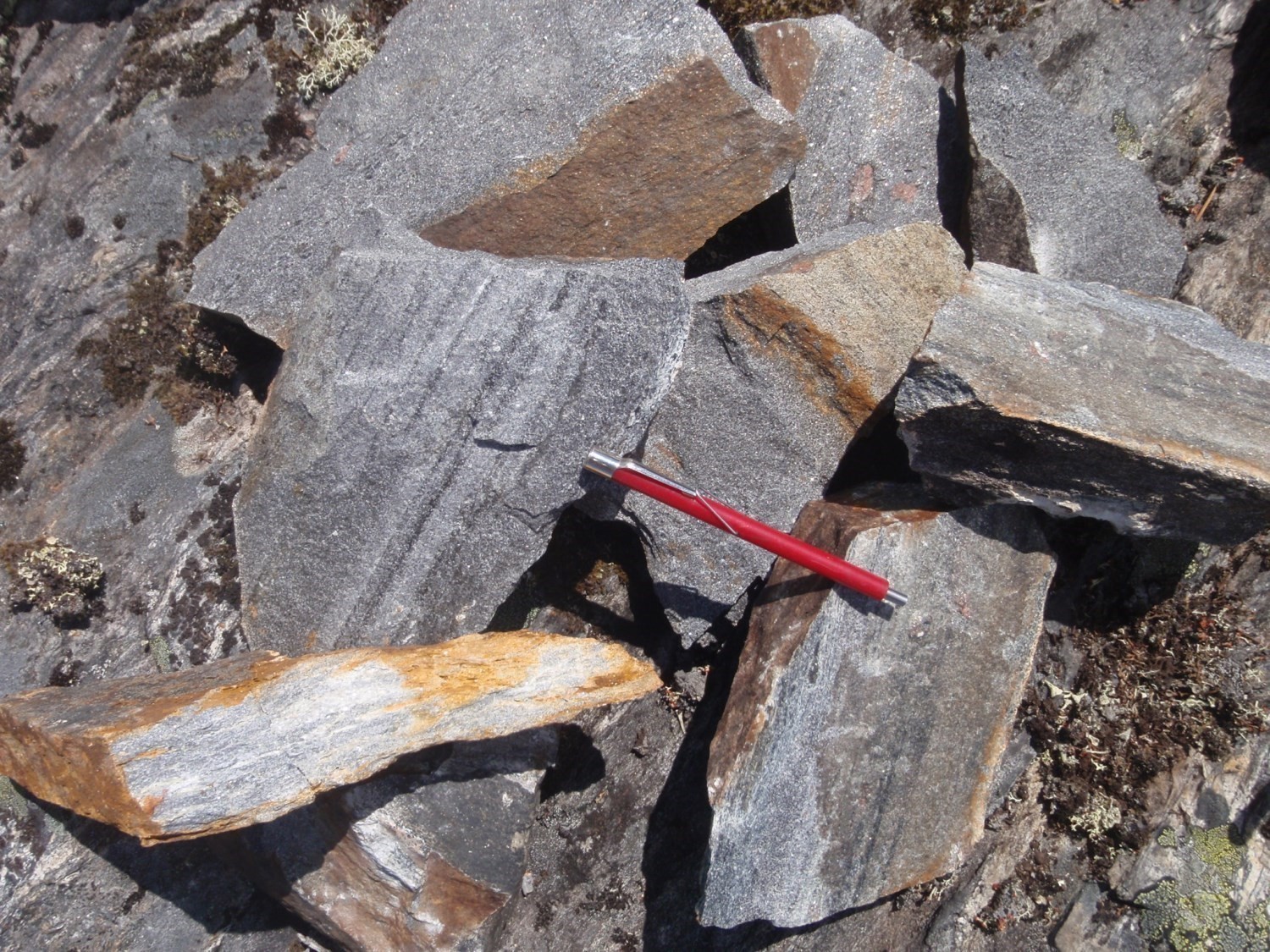 This subunit is distinguished by its greater plagioclase and K-feldspar content. It consists of paragneiss derived from arkose and subarkose. The rock is medium-light whitish grey in fresh exposure and brownish grey or medium-light beige grey in altered surface. It is foliated and generally homogeneous. Its grain size varies fine to medium. It contains 1 to 15% biotite (0.5-2 mm) and trace to 1% garnet (1 mm). Subunit nAvrd2c consists of metatexite derived from paragneiss and migmatized paragneiss. It differs from unit nAvrd2 by the presence of mobilisate resulting from partial melting of the host rock. These metatexites contain 10 to 40% granitic mobilisate and 60 to 90% restite derived from paragneiss. Restite is usually fine to medium grained and foliated. It is grey in fresh exposure and medium-light brownish grey in patina. Its biotite content ranges from 20 to 30%, with a grain size of 1-5 mm. Some restites contain garnet and cordierite-sillimanite porphyroblasts. The mobilisate is medium-light whitish grey in fresh exposure and light whitish beige in altered surface. It is generally heterogeneous and heterogranular with medium to coarse grain size. The mobilisate is mainly injected subparallel to the main foliation, resulting in a stromatic texture. Smaller millimetre to centimetre-thick injections, perpendicular to foliation and forming ptygmatic folds, are more locally found. The primary accessory mineral is biotite (1-10%, 2-5 mm) occurring as schlierens or millimetre-thick rims between mobilisate and restite. Garnet has only been observed very locally. There are also migmatized paragneiss horizons in this unit. They are distinguished primarily from metatexites by lower mobilisate abundance (5-10%). Decametre to hectometre-thick and 1 to 5 km long quartzite horizons were mapped during the work of Bandyayera and Caron-Côté (2019). Quartzite is light beige grey in fresh exposure and whitish grey in altered surface. It is medium grained, laminated and foliated. It usually shows a saccharoidal appearance. Garnet (1-10%) is the most common accessory mineral followed by muscovite or biotite (1-5%). 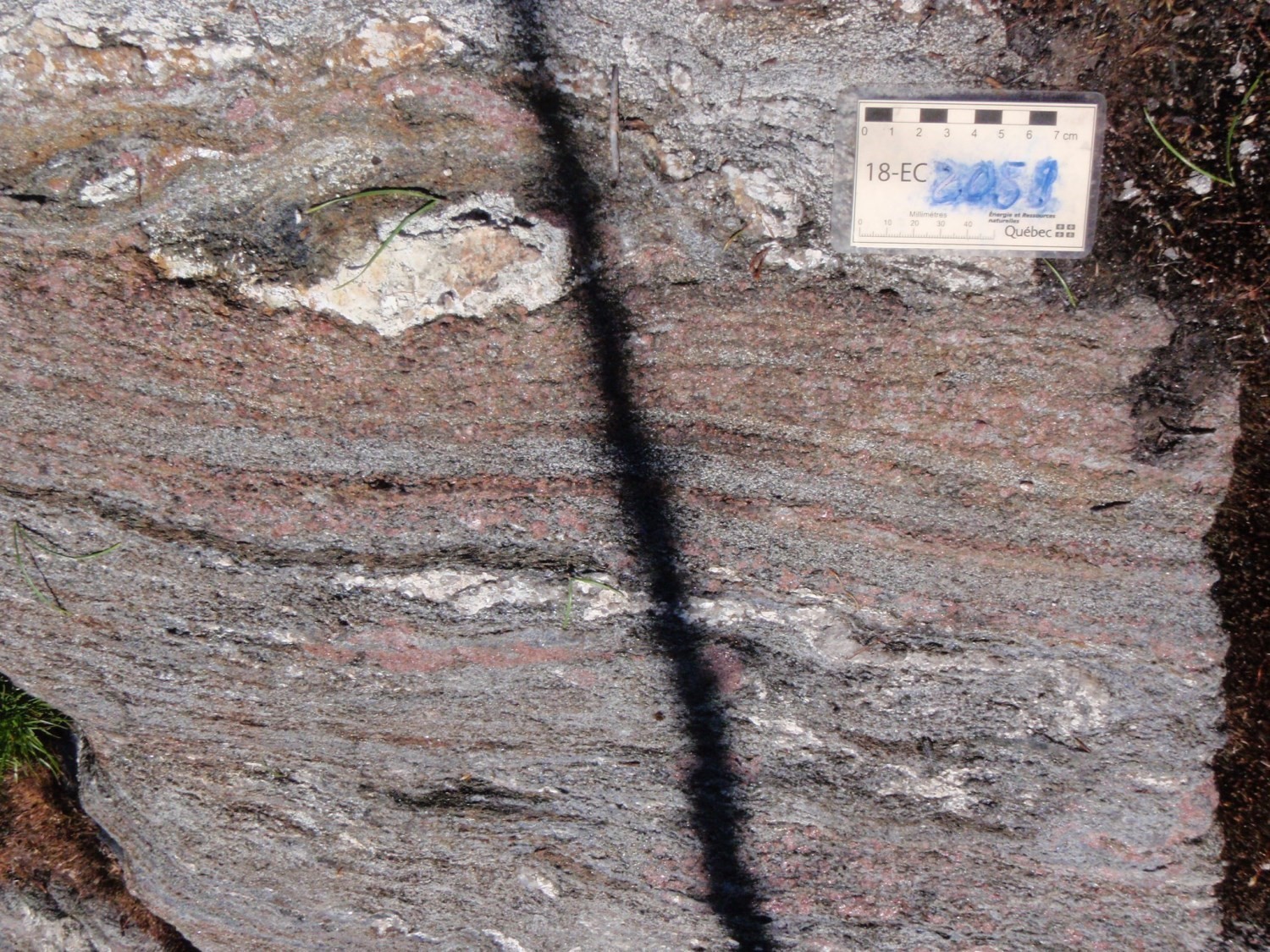 Oxide-silicate iron formations consist of alternating reddish garnet-biotite silicate beds and bluish grey quartz-magnetite oxide beds. While some decimetric horizons are homogeneous, fine to medium grained and have centimetre-thick compositional banding, others are decimetric, heterogeneous, heterogranular, fine to coarse grained and porphyroblastic. These horizons with different textures still show similar mineralogical assemblages. Garnet makes up between 10 to 40% of the rock, commonly as millimetric to centimetric porphyroblasts. Magnetite (5-15%) is fine grained, while quartz (20-40%) and biotite (10-20%) are medium grained. 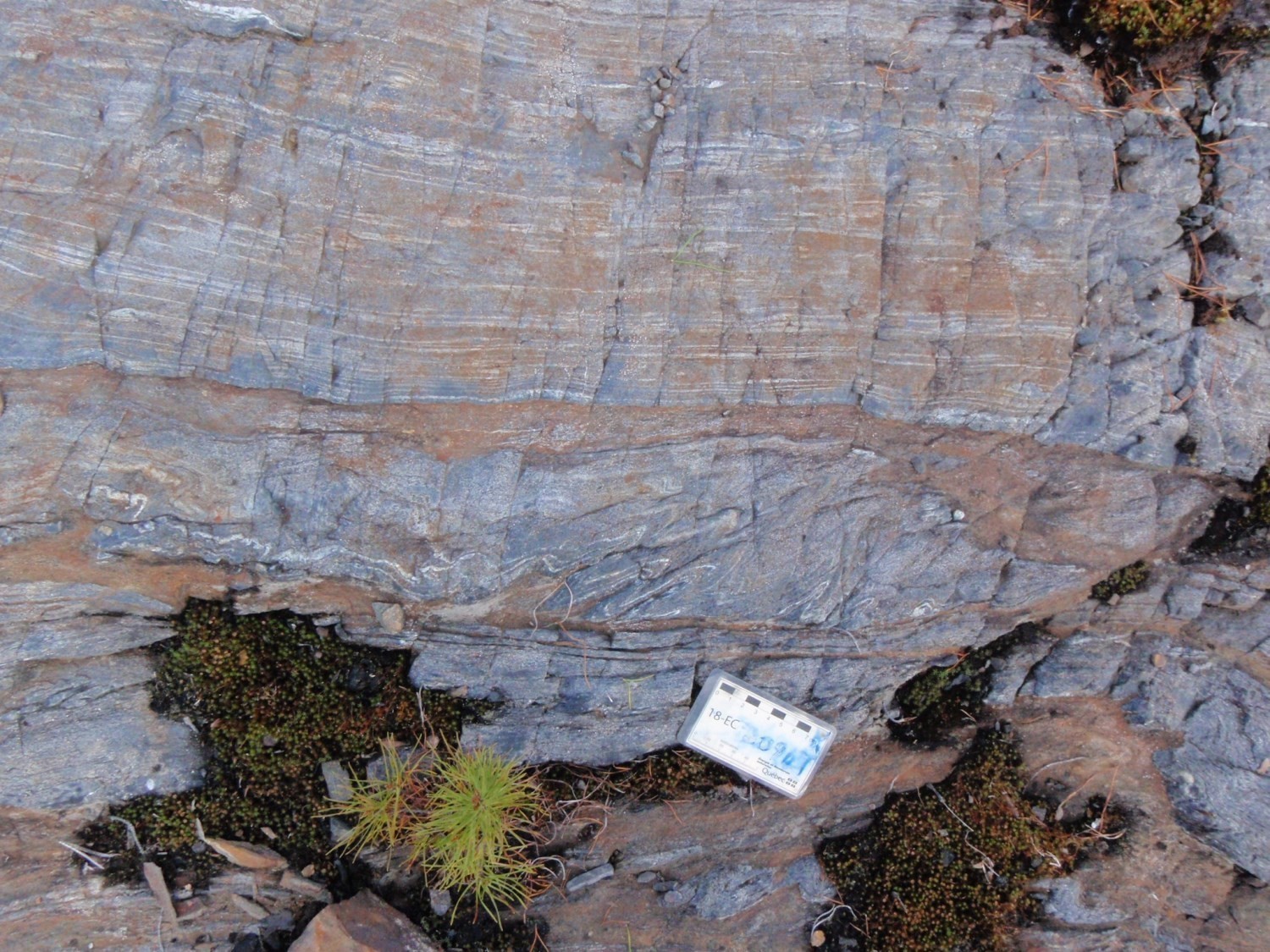 Oxide facies horizons are dark greyish blue in altered patina. They are fine to medium grained. In addition, they show millimetric to centimetric banding with different proportions of quartz and magnetite. Silicate facies horizons are light greenish beige. They are foliated, banded and medium grained. Their matrix is composed of a hornblende-actinolite-plagioclase assemblage. They contain 5 to 20% creamy light green grunerite porphyroblasts, ranging in length from 1 to 7 cm.

These metasomatic rocks were mapped by Valiquette (1975), who made an extensive petrographic description. None of the outcrops visited showed any contact between metasomatic rocks and their host rocks. From a map point of view, they are in contact with gneiss of the Théodat Complex (Athe1a) and amphibolites of the Lac des Montagnes Group (nAmo1) to the SE. At their NW limit, they are in contact with nAmo1 amphibolites and quartzite of the Voirdye Formation (nAvrd3). The particular paragenesis of this unit likely results from hydrothermal alteration followed by regional metamorphism. Valiquette (1975) argues that their protolith could be metasedimentary rocks since the most important outcrop zone, located near Lemare Lake, is in an environment dominated by biotite paragneiss. Also, quartz-cordierite-sillimanite-rich lenses are locally observed within outcrops of cordierite-anthophyllite rocks. However, Bernier (1992) conducted a lithogeochemical study of these metasomatic rocks and attempted to identify their protoliths using immobile elements. According to his work, cordierite-anthophyllite rocks are derived from metamorphism of chloritized basalts and serpentinized ultramafic rocks that have undergone hydrothermal alteration. Outcrops usually are in positive relief. They are locally rusted several metres long. The outcrop’s surface is generally greyish green and red, where anthophyllite and garnet predominate, cream beige where cordierite predominates, and rusty where pyrite-pyrrhotite mineralization is present. Outcrops generally show banding that may correspond to primary sedimentary bedding. The rock is generally heterogeneous and heterogranular. The grain size varies from fine to coarse. The main minerals observed in order of importance are anthophyllite, cordierite, garnet, sillimanite, quartz, magnetite and locally chlorite. Antophyllite-cordierite is the most common assemblage. There are also assemblages dominated by anthophyllite and garnet. Antophyllite occurs mainly as centimetric, locally decimetric, acicular and radial rods, forming rosette clusters. Cordierite occurs as millimetric to centimetric porphyroblasts in positive relief. Garnet is disseminated or forms garnetite beds. Crystals range in size from 0.1 to 3 cm. 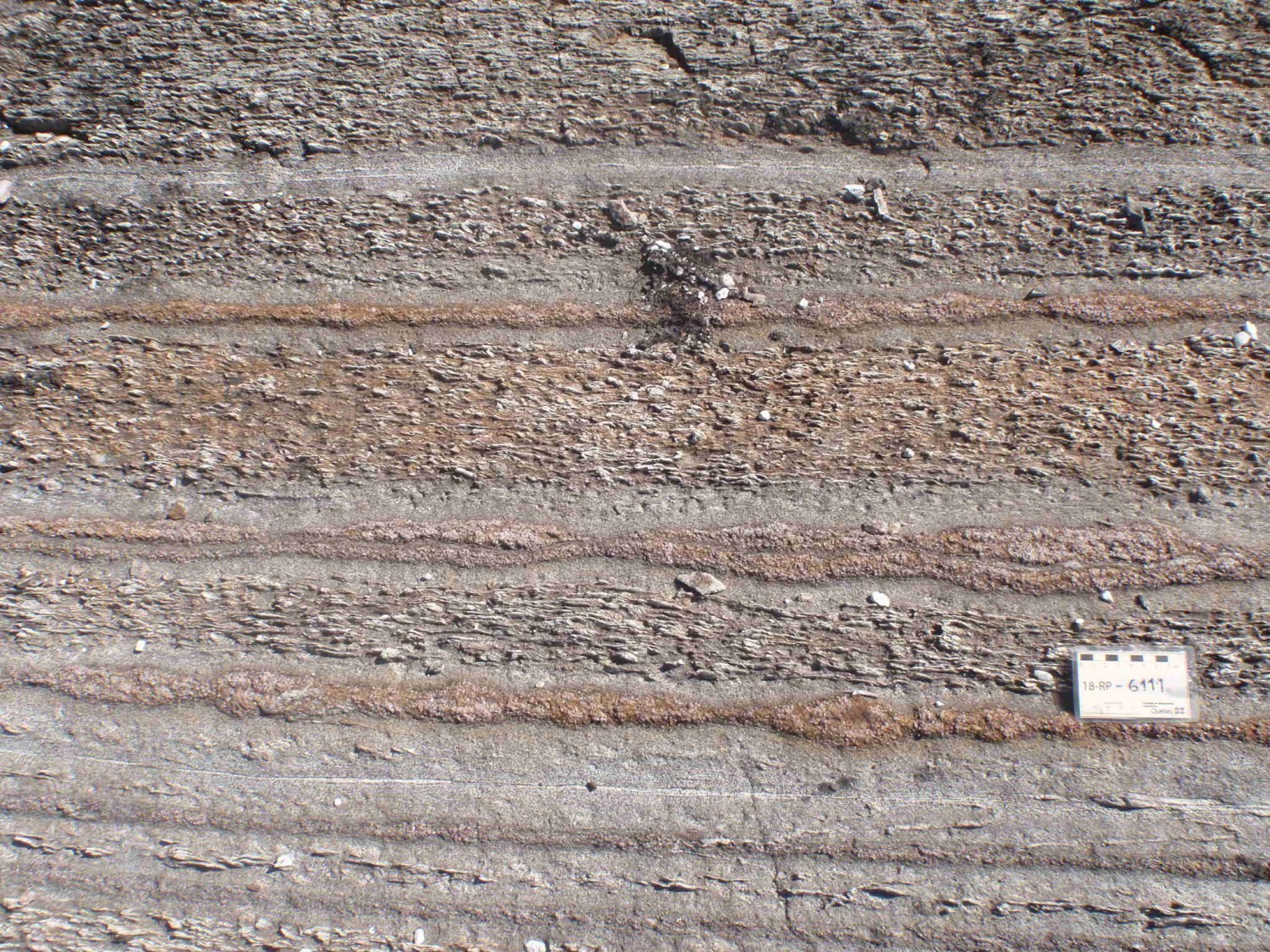 This subunit shows the same petrographic characteristics as subunit nAvrd2a, but contains small centimetre to decimetre-thick garnetite horizons. The host rock consists of biotite-garnet cordierite±sillimanite porphyroblastic paragneiss. There is sedimentary bedding, where brown horizons rich in biotite and aluminosilicate porphyroblasts are likely to be pelitic protoliths, while light-coloured horizons containing fewer accessory minerals are likely to be more arenitic protoliths. Garnetite horizons were mainly emplaced within arenitic horizons. This garnetite is generally fine to medium grained, locally coarse grained. The rock is foliated, homogeneous and heterogeneous in places. It contains 40 to 80% garnet. Other minerals present are quartz, biotite and chlorite. In thin section, grunerite and green hornblende are also observed. Garnets are porphyroblastic and poikilitic. They contain 20 to 40% quartz inclusions.

In terms of geochemical composition, these rocks contain on average 55% SiO2, 10% Al2O3 and 25% Fe2O3T (samples 2018074414 and 2018074415). The genesis of these garnetite horizons remains undetermined at this time. They could be metasomatic in nature, mostly within arenitic horizons, due to their greater porosity allowing hydrothermal fluids to flow through them. However, their high iron content may also indicate that they are small silicate facies iron formation horizons.

The second unit in terms of importance is the biotite+garnet cordierite±sillimanite porphyroblastic paragneiss (nAvrd2a). It predominates in the NE portion of the formation, in the Goulde Lake (sheet 32O11), Montagnes Lake (sheet 32O12) and Glas Lake (sheet 32O14) areas.

Arkosic and subarkosic paragneiss (nAvrd2b) form two bodies 10 to 20 km long and 2 to 4 km wide. These are found in the Montagnes Lake (sheet 32O12) and Glas Lake (sheet 32O14) areas, in the SE portion of the belt in contact with the Opatica Subprovince.

Metatexites (nAvrd2c) are generally more prevalent in the SW and NE ends of the formation, whereas they are almost absent from the central part. At the NE end of the formation, these rocks are located in the Glas Lake area (sheet 32O14). In the SW end, they are found in sheets 32N07, 32N08 and 32N09.

Paragneiss containing centimetric to decimetric garnetite horizons (nAvrd5a) are found between Bourrier and Glas lakes in sheet 32O14. They are 11 km long and approximately 1 km wide.

Quarzites (nAvrd3) were mainly observed in the vicinity of Voirdye, Senay, Chlorite and Sillimanite lakes, as well as in the centre of sheet 32O15. They occur as decametre to hectometre-thick horizons ranging in length from 1 to 5 km.

Metasomatic rocks (nAvrd5) are mainly found in sheets 32O11 and 32O12. They are located south of Senay Lake and between Lemare and Voirdye lakes, ~500 m ESE from the latter. They form an elongated lens along the NE-SW axis for ~7 km long and 50 to 250 m wide. Another smaller lens is located 5 km east of Spodumène Lake.

Iron formations (nAvrd4) were mainly found in the Glas Lake (sheet 32O14) and Nasaucauso Lake (sheet 32O15) areas. Themost important are located near Senay and Andalousite lakes, a few kilometres east of Du Glas Lake and in the western part of sheet 32O15. In outcrop, these they are decimetric to metric. Their lateral extension is still not well known.

Conglomerates are observed very locally. They tend to be located near deformation zones. The most important lens is located east of Black Lake in sheet 32O11.