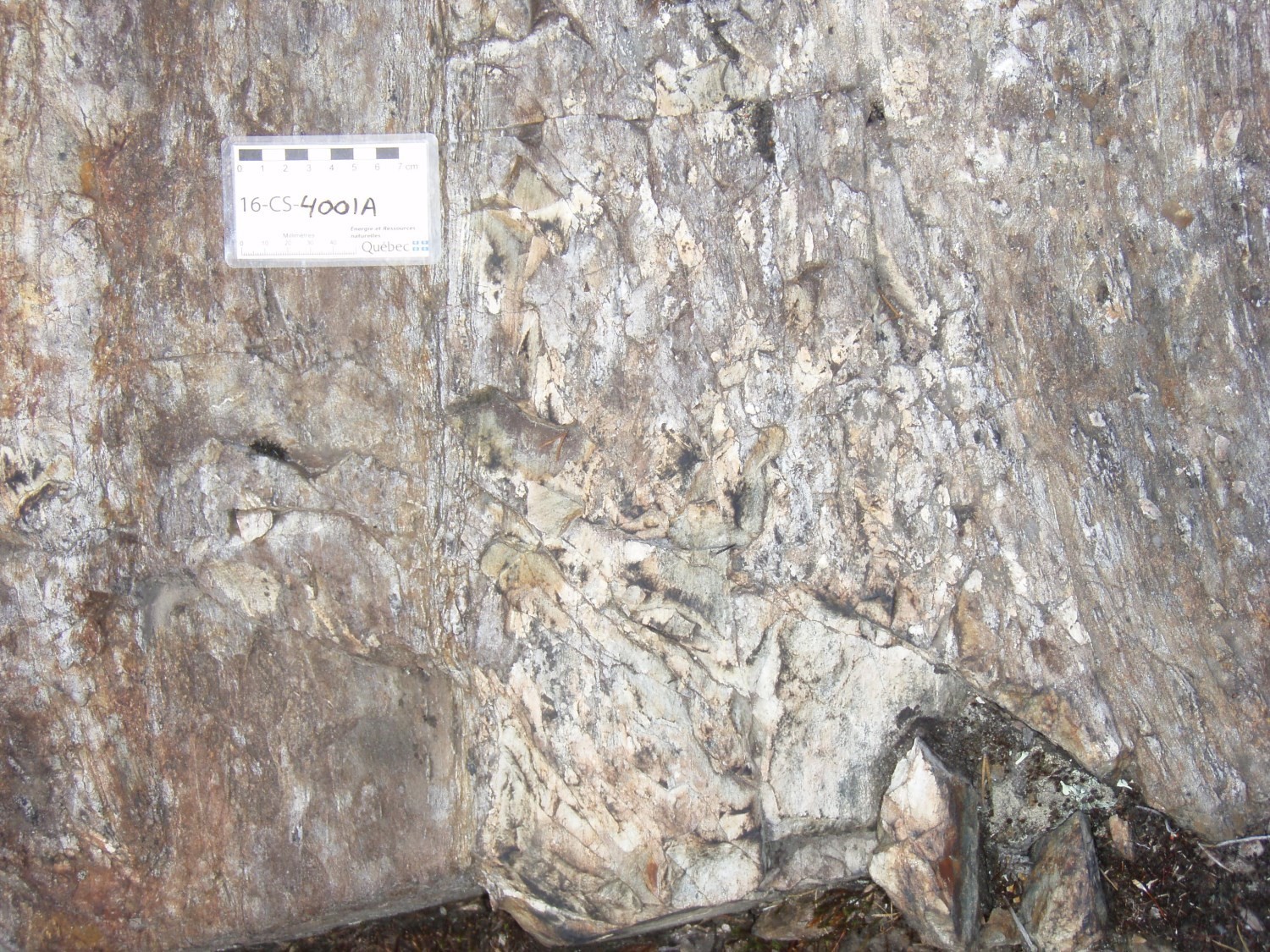 The Lac des Montagnes Group was introduced in the early 2000s during the compilation work for the Nemiscau and La Grande subprovinces. It was defined to describe a package of volcano-sedimentary rocks observed south of the Champion Complex between the Rupert and Nemiscau rivers (sheets 32N07, 32N08, 32N09, 32O11, 32O12 et 32O14). Valiquette (1963) was the first to describe these rocks in the Montagnes Lake area; the subdivisions and the descriptions of the unit are based on his work (Valiquette, 1963 and 1975). Bandyayera and Daoudene (2018a and 2018b) and Bandyayera and Caron-Côté (2019) also contributed to the mapping of the Lac des Montagnes Group and later assigned it to the La Grande subprovince (Bandyayera et al, 2022). A volcano-sedimentary rock unit that extends ~60 km along an E-W axis (sheets 32N05, 32N06, and 32N07) in the Nemiscau Subprovince had originally been attributed to the Lac des Montagnes Group. These rocks are now reassigned to the Peat Formation (Bandyayera et al., 2022).

The Lac des Montagnes Group consists mainly of volcano-sedimentary rocks. It is divided into five units:

However, the stratigraphic succession of these units could not be accurately determined.

This unit represents ~80% of the area of the Lac des Montagnes Group. The most representative outcrops are located NW and north of Senay Lake (sheet 32O11; Valiquette, 1975). 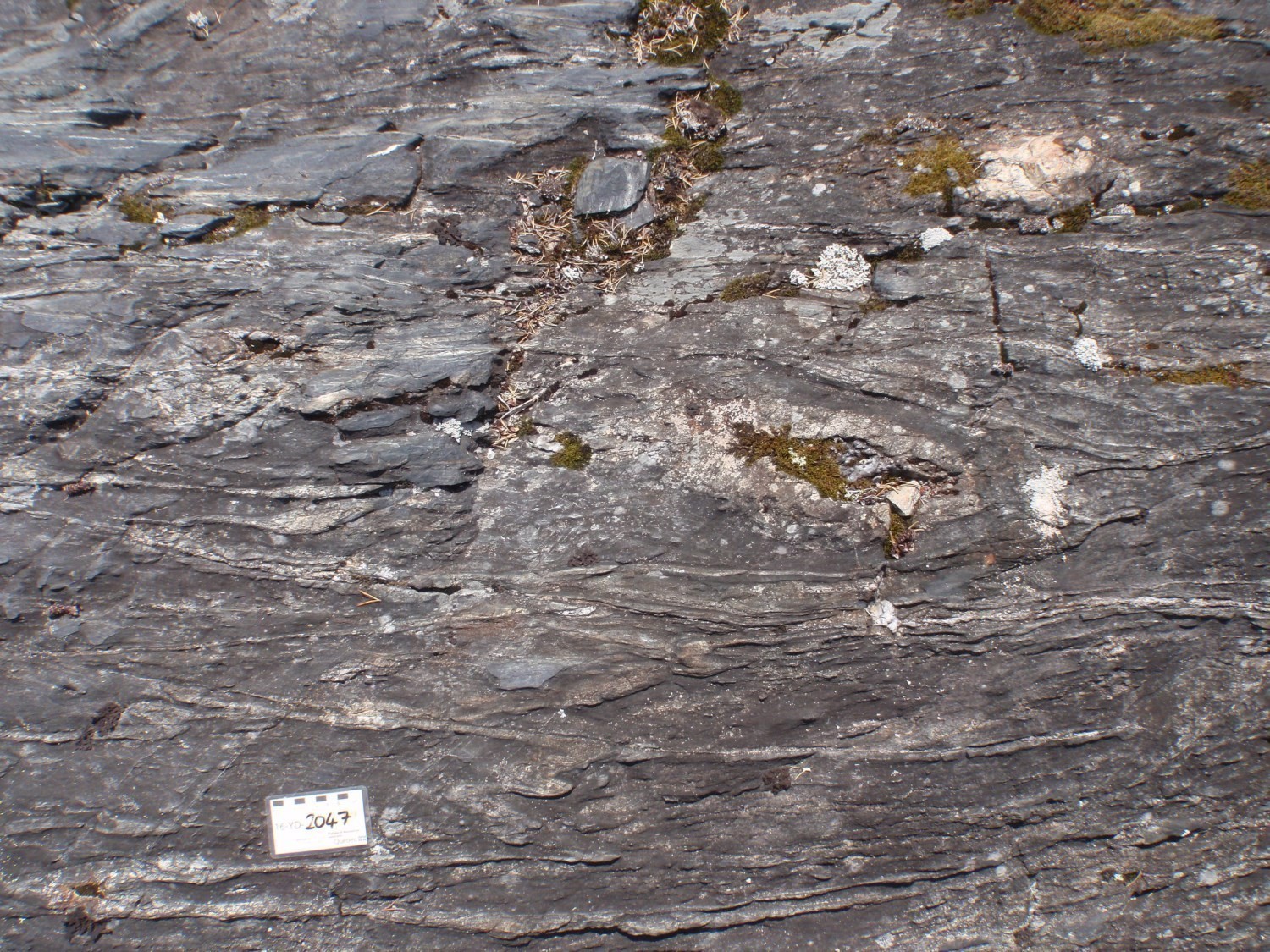 The basalt and amphibolite derived from basalt in the nAmo1 unit are fine to medium grained, greenish grey on a fresh surface and have a dark green to black, locally light grey, altered patina. These rocks form massive to pillow flows locally associated with flow breccias. Pillows are usually elongated, stretched and flattened and surrounded by well-recognizable hyaloclastic material. Locally, deformed quartz chambers appear to indicate stratigraphic polarity to the south. The margins of the pillows are generally richer in hornblende than the rest of the rock and show epidote, or locally, silica alteration. These areas may also contain 5-10% garnet, 5% biotite and up to 15% disseminated sulphides. The spaces between pillows, as well as the centre of pillows and the massive lava flows show in places a replacement with felsic material or saussuritized nuclei (“epidote balls”). These nuclei are widespread in these basaltic rocks.

In thin section, the metavolcanic rocks of the nAmo1 unit show a fine to very fine grain size and a generally granonematoblastic microtexture. They are mainly composed of >50% amphibole (hornblende, actinolite-tremolite) and 40% plagioclase associated with minor amounts of quartz and biotite. Hornblende is partially replaced by chlorite and epidote. These rocks are metamorphosed from the upper greenschist to the amphibolite facies and contain sphene, sulphides, calcite and sericite as accessory or alteration minerals.

Unit nAmo1 contains in places decametric layers of massive to pillow ultramafic lava. The tremolite-rich foliated rock is magnetic, fine to medium grained and is dark grey to brownish on an altered surface and medium to dark greenish grey on a fresh surface. The ultramafic volcanic rock layers are characterized by tourmaline alteration combined with an enrichment in tremolite-actinolite. Tourmaline (5-15%) occurs as clusters, or isolated crystals up to 3 cm, aligned parallel to the foliation.

Lithogeochemical analyses show that the nAmo1 unit is composed of tholeiitic basalt and locally andesitic basalt of transitional to calc-alkaline affinity. In the Mezière and Nemiscau lakes region (sheets 32N06 and 32N07) to the west, most tholeiitic basalts, especially magnesian and komatiitic basalts, are characterized by an enrichment in heavy rare earth elements relative to light rare earth elements. Trace element ratios of these rocks clearly show a geotectonic emplacement setting similar to that of N-MORB (Pearce, 2008). Further east, in the La Sicotière Lake area (sheet 32N08), tholeiitic basalts are generally characterized by flat rare earth element profiles. Their ratios of trace elements suggest a geodynamic environment similar to that of island-arc tholeiites, or ocean floor basalts contaminated by the continental crust (Pearce, 2008; Wood, 1980).

This ultramafic volcanic rock unit consists of komatiites and komatiitic basalts. Unit nAmo1a has not been integrated with unit nAmo5 because the two units represent two clearly different stratigraphic layers. Unit nAmo1a is located near the contact with the Opatica Subprovince, and is interpreted to be the base of the Lac des Montagnes Group. In contrast, unit nAmo5 is found throughout the volcanic sequence.

The outcrops of unit nAmo1a show alternating massive komatiitic flows with cumulate layers and foliated komatiitic flows containing spinifex-textured layers. In one location, a rusty erosional contact or erosional channels are observed between the massive flows and the spinifex-textured foliated flows, indicating a stratigraphic top to the south. Bedded layers contain centimetric brownish skeletal minerals (olivine or orthopyroxene) arranged perpendicular to the bedding. 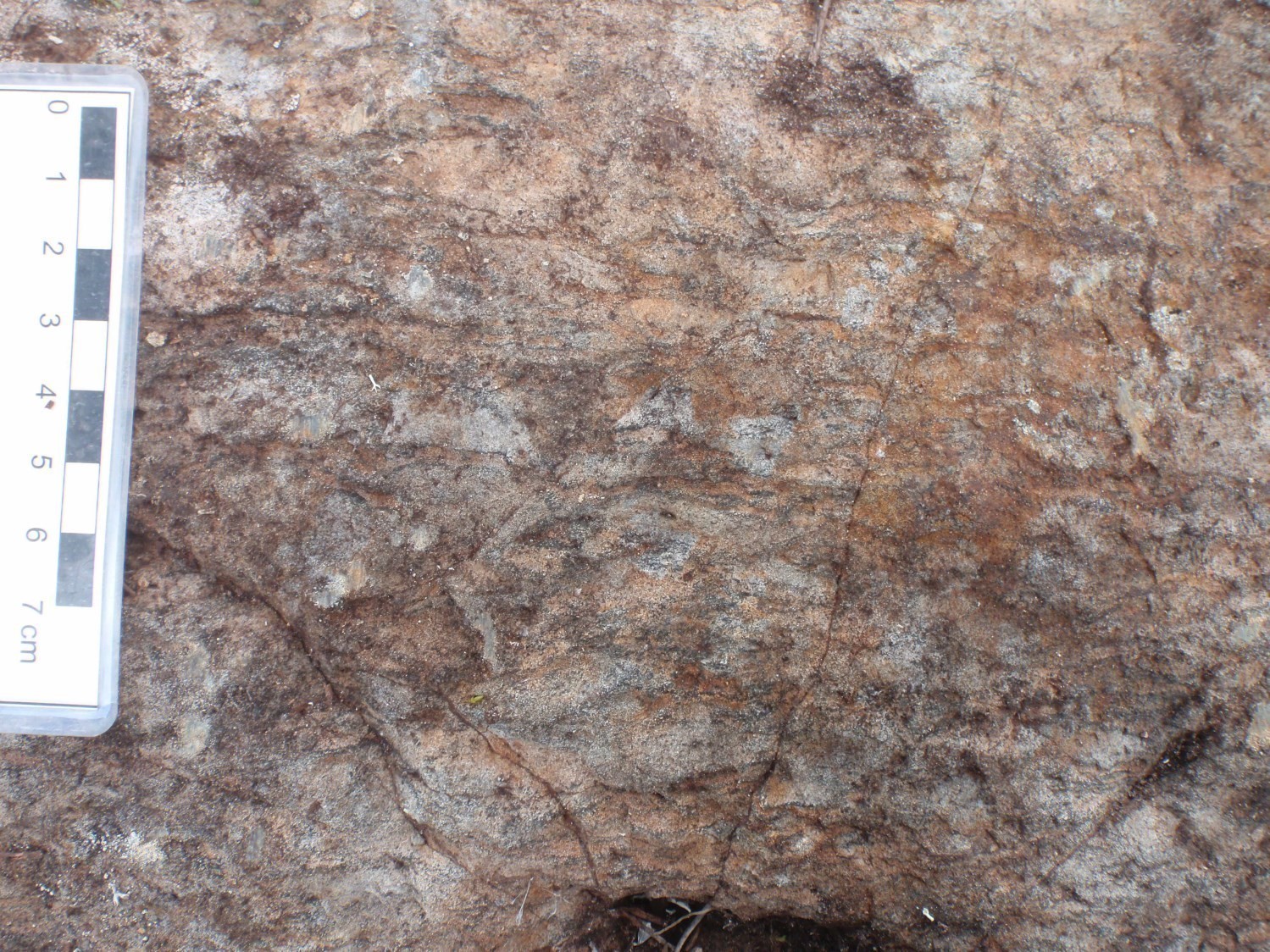 The intermediate volcanic rock unit is the least known of the Lac des Montagnes Group. These rocks are generally described in the field as amphibolitized basalt. They have been renamed based on lithogeochemical analysis results. Dark grey on an altered surface, medium grey to greenish grey on a fresh surface, these fine- to medium-grained rocks are homogeneous, foliated and locally magnetic. Locally, there are structures interpreted as isolated, stretched and flattened pillows, amphibolitized flow margins, or pillow breccias. The rock contains 60% hornblende (0.5 to 5 mm) and 1% to 2% magnetite (0.2 to 0.5 mm). In places, silicified and garnet-rich (up to 30%) layers are observed. Geochemically, these are andesites of calc-alkaline affinity and richer in SiO2, TiO2 and light rare earth elements than the basalt of unit nAmo1. 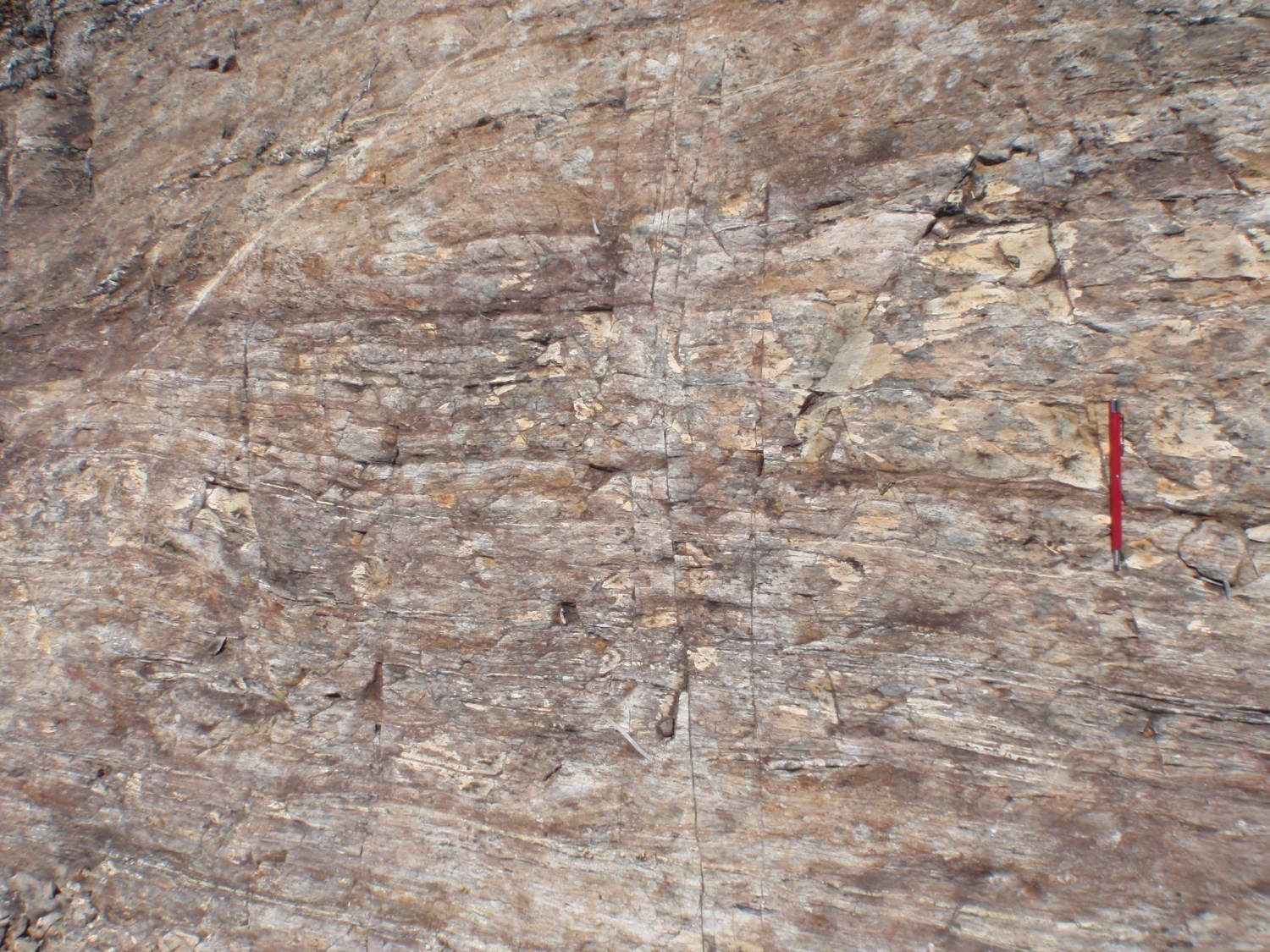 The felsic volcanic rock unit, in places intermediate, accounts for nearly 10% of the Lac des Montagnes Group. Unit nAmo3 consists of felsic volcaniclastic rocks in the form of decametric to hectometric layers, interstratified in the basaltic sequence of unit nAmo1. The best preserved sequences consist of bedded felsic tuffs characterized by alternating centimetric to metric beds of lapilli tuff, fine-grained massive ash tuff and conchoidal-fractured fine-grained tuff. The rock is whitish on an altered surface and greenish grey on a fresh surface. The matrix is sericitized and chloritized.

In thin section, the felsic tuffs are granoblastic and mainly composed of quartz and plagioclase grains in a fine-grained recrystallized matrix composed of chlorite, sericite, epidote, quartz and plagioclase. Apatite, sphene and sulphides are present as accessory minerals. Lithogeochemical analyses show that the felsic tuff of unit nAmo3 is of rhyodacitic, locally rhyolitic, composition and calc-alkaline affinity. 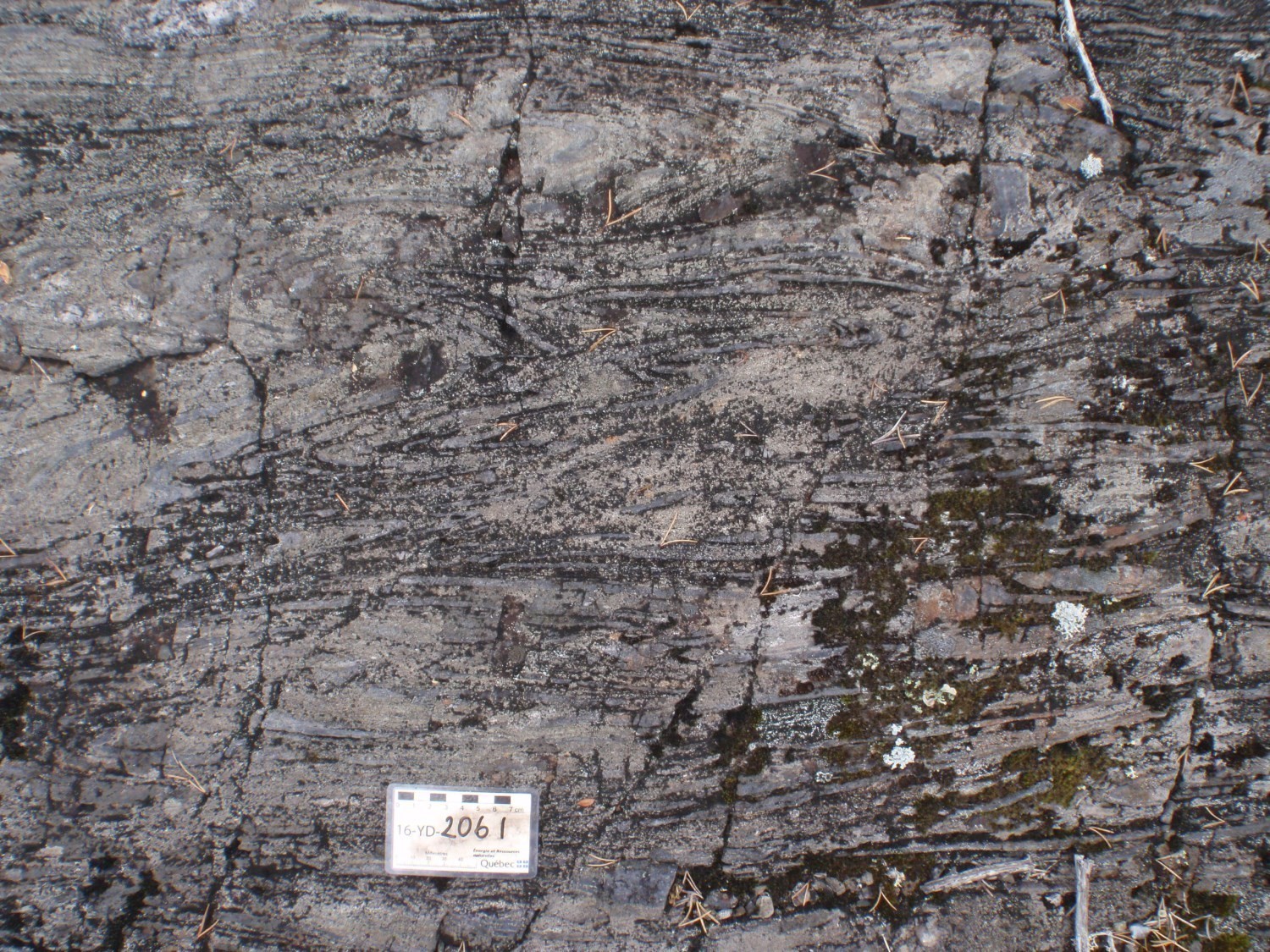 Unit nAmo4 consists of several layers of iron formation <150 m thick, and up to 8 km in length, interstratified in the basalt unit (nAmo1). In places, they are located at the top of the basalts of unit nAmo1, and mark the transition between the volcanic rocks of the Lac des Montagnes Group and the sedimentary rocks of the Voirdye Formation. These highly magnetic layers are clearly visible on aeromagnetic maps.

Layers of silicate facies iron formation have also been observed in volcano-sedimentary rock remnants of the Champion Complex. These have been incorporated into the Lac des Montagnes Group. In thin section, the rock contains up to 75% cummingtonite and 15% garnet poikiloblasts. 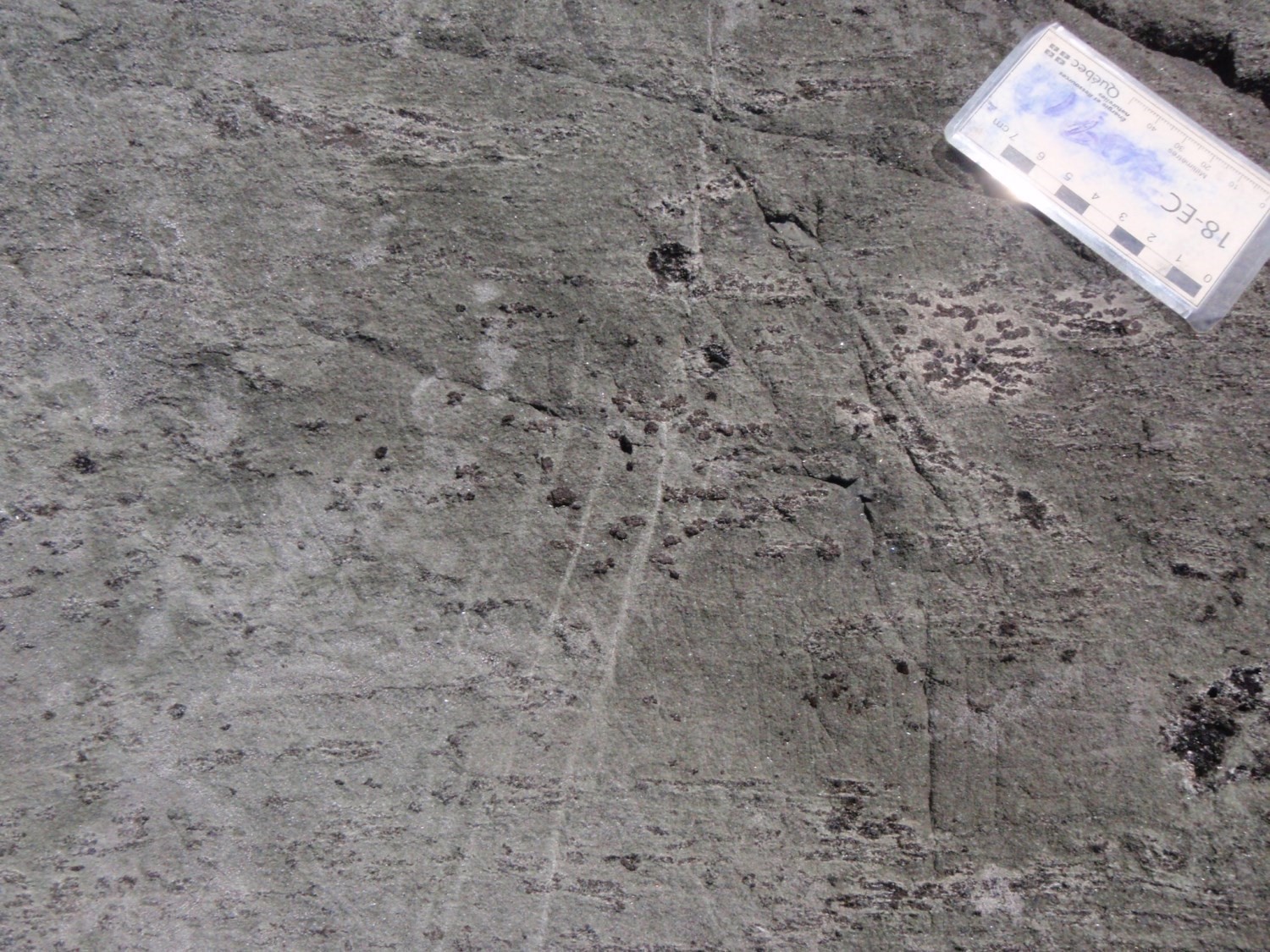 Unit nAmo5 represents a small proportion of the Lac des Montagnes Group and consists of amphibolite layers derived from komatiitic basalt. This unit occurs as decametre to hectometre-thick layers interstratified in the basaltic sequence of unit nAmo1. It appears to be spatially associated with a felsic volcanic rock layer of unit nAmo3 located north of Voirdye Lake. Amphibolites derived from komatiitic basalt are fine to medium grained and foliated. They are dark green both on a fresh surface and on an altered patina. They are mainly composed of actinolite (>90%) and contain accessory serpentine. On some outcrops, these rocks contain 1 to 5% tourmaline as millimetre-sized crystals.

The Lac des Montagnes Group extends discontinuously for ~175 km along a NE-SW axis (sheets 32N07 to 32O15). The unit generally ranges in width from 200 m to 1000 m. In sheet 32N, it occupies mainly the NW portion of the Lac des Montagnes Belt, whereas in sheet 32O, it occurs on both sides of the belt, on its NW and SE flanks.

Unit nAmo2 forms several small lenses that are sparsely distributed, notably west of Hutte Lake and south of Indien and Caumont lakes. Unit nAmo3 occurs mainly in the Voirdye Lake area as well as south of Indien Lake and NW of La Sicotière Lake. Iron formation unit nAmo4 was mapped very locally by Bandyayera and Daoudene (2018a and 2018b). It is located primarily south of Caumont Lake and east of Kanamekuskasich Lake (32N08 and 32N09). Unit nAmo5 is mainly observed between the Voirdye and Chlorite lake areas (Bandyayera and Caron-Côté, 2019). It has also been recognized in sheets 32N08 and 32N09, but does not appear on the geological map due to its small size.

The Lac des Montagnes Group, formerly part of the Nemiscau Subprovince, has been reassigned to the La Grande Subprovince (Bandyayera et al., 2022). It is in structural contact with the plutonic and gneissic rocks of the La Grande and Opatica subprovinces. To the north, it is separated from the Champion Complex by the Nisk Shear Zone, and to the south, from the Théodat Complex by the Poste Albanel Shear Zone. These volcanic rocks are stratigraphically overlain by the sedimentary Voirdye Formation, which occupies essentially the central part of the Lac des Montagnes Belt. The contact between these two units is concordant, although locally sheared. This concordance is better exposed in the area south of Nemiscau Lake (sheet 32N07). The volcanic belt located south of the Rivière Nemiscau Shear Zone has also been included in the Lac des Montagnes Group, since it shares the same characteristics and lithological associations.

WOOD, D.A., 1980. The application of a Th-Hf-Ta diagram to problems of tectonomagmatic classification and to establishing the nature of crustal contamination of basaltic lavas of the British Tertiary volcanic province. Earth and Planetary Science Letters; volume 50, pages 11-30. doi.org/10.1016/0012-821X(80)90116-8