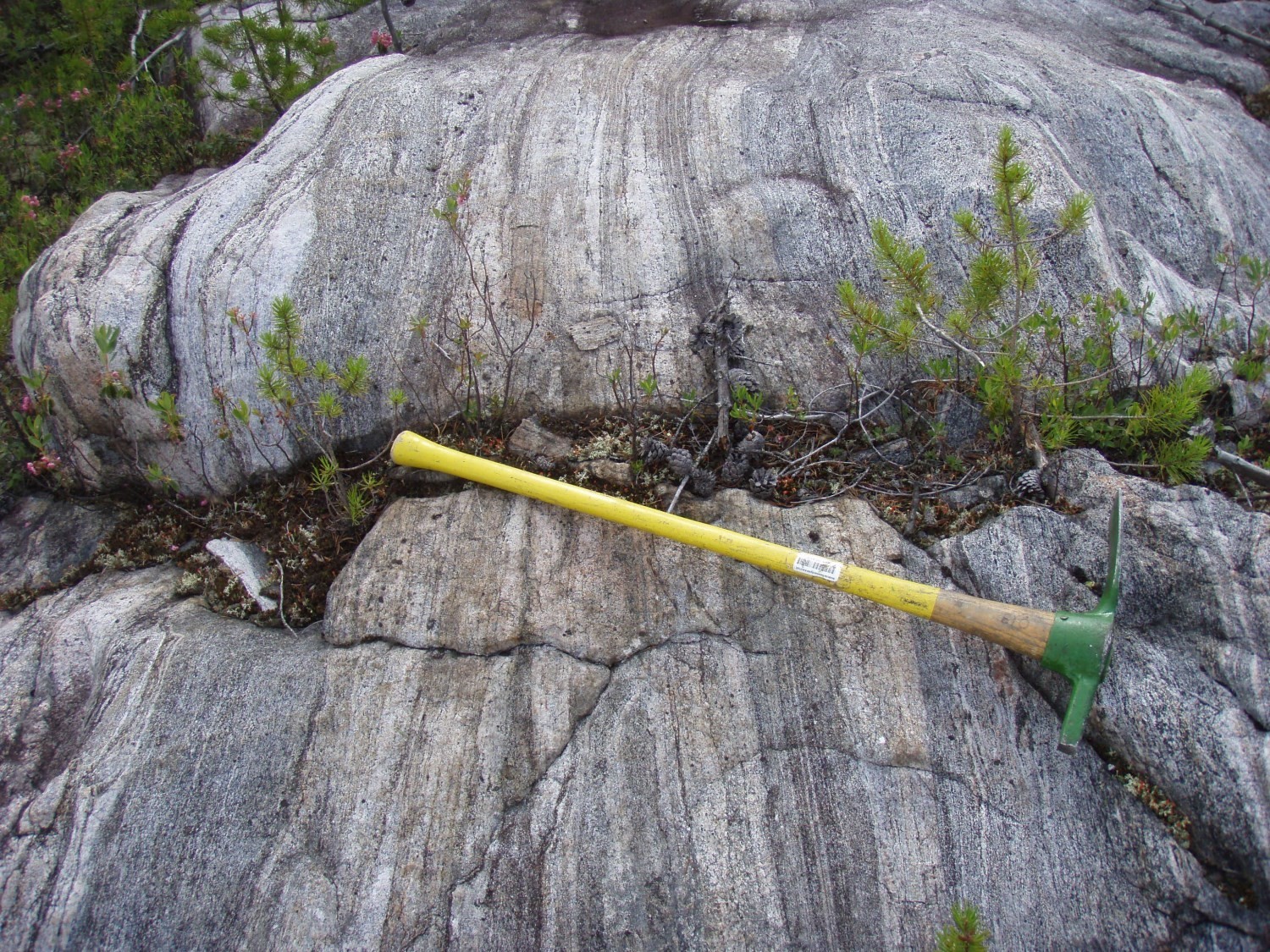 The Champion Complex is introduced to describe a large, polyphase, intrusive mass bounded by the Eastmain Group to the north, by the Nemiscau metasedimentary Subprovince to the west and south, and by the Lac des Montagnes Group to the east. It encompasses the Champion Lake plutonic terrain first assigned by Card and Ciesielski (1986) to the La Grande Subprovince, then reassigned to the Nemiscau Subprovince by Hocq (1994). New geophysical and geological data (D’Amours, 2011; Moukhsil, 2000), as well as fieldwork results from 2016 (Bandyayera and Daoudene, 2018a), 2017 (Bandyayera and Daoudene, 2018b),  2018 (Bandyayera and Caron-Côté, 2019) and 2021 (Bandyayera and Caron, 2022) indicate that the Champion Complex is the southern extension of the La Grande Subprovince. 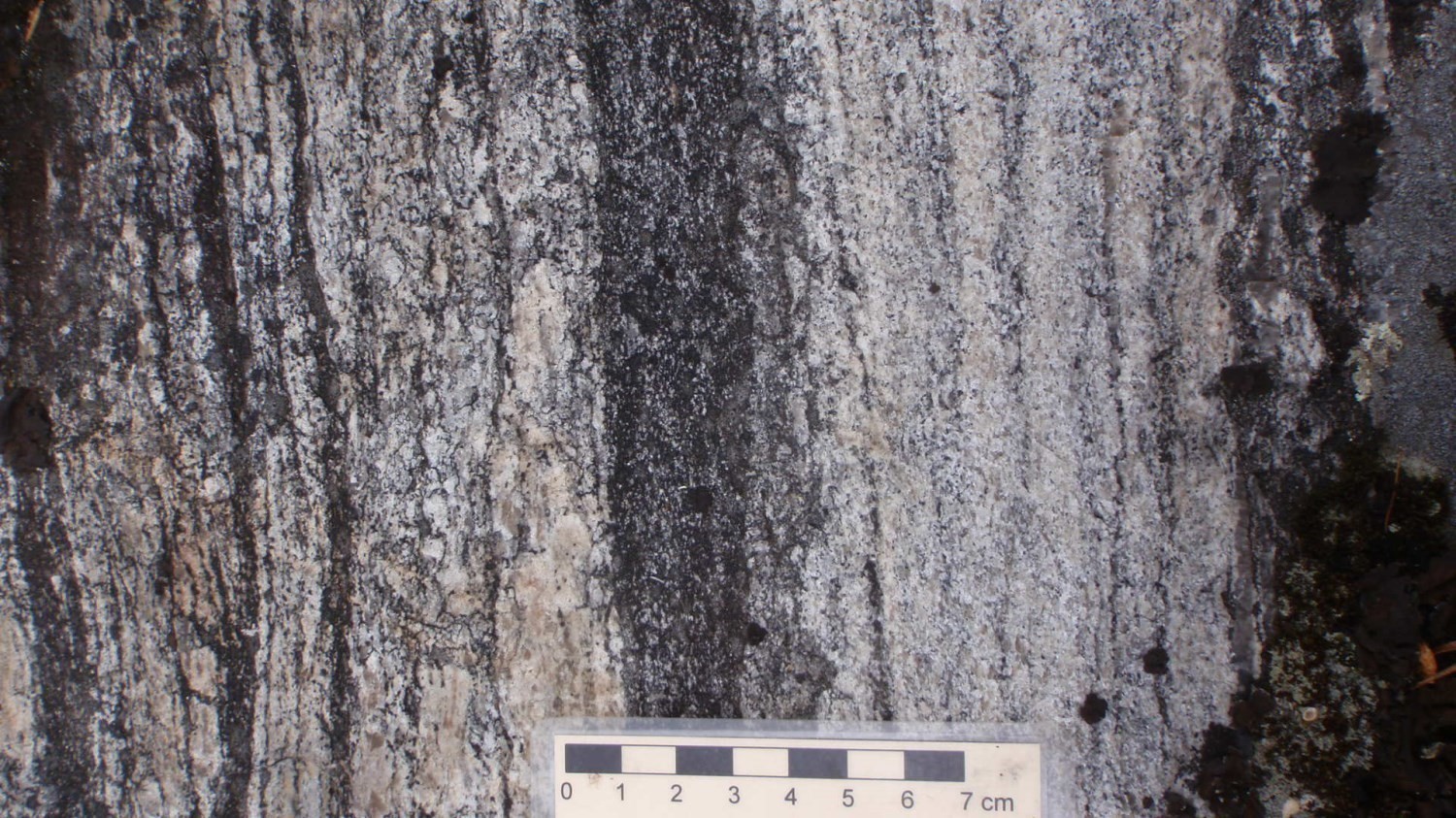 Unit Achp1, outcropping NW of Mezières Lake (sheet 33N06), is separated from the Lac des Montagnes Group by the Rivière Rupert Shear Zone (RRSZ). Tonalitic gneiss is medium grained, light grey in altered surface and fresh exposure. It is heavily deformed, folded, locally banded, heterogeneous and low to highly magnetic. The gneissic texture is primarily marked by alternating millimetric to centimetric white and greyish ribbons. This banding is locally accentuated by centimetric intrusions of pink granite or granodiorite parallel to foliation planes. It is more pronounced near deformation zones. Fine to medium-grained tonalitic to dioritic ribbons are partially recrystallized. They contain 10 to 20% greenish hornblende and brownish to greenish-brown biotite in varying proportions. Biotite is chloritized and commonly contains zircon inclusions. Accessory minerals are allanite, sphene and apatite. South of the Mezières Lake area (sheet 32N06), the tonalitic gneiss that appears within the migmatites is highly magnetic and includes up to 10% magnetite. Unit Achp1 includes up to 20% enclaves or decametric strips of foliated and locally gneissic magnetic diorite.﻿ From a geochemical perspective, tonalitic gneiss are metaluminous to locally peraluminous, type I, typically calcic and moderately enriched with potassium. 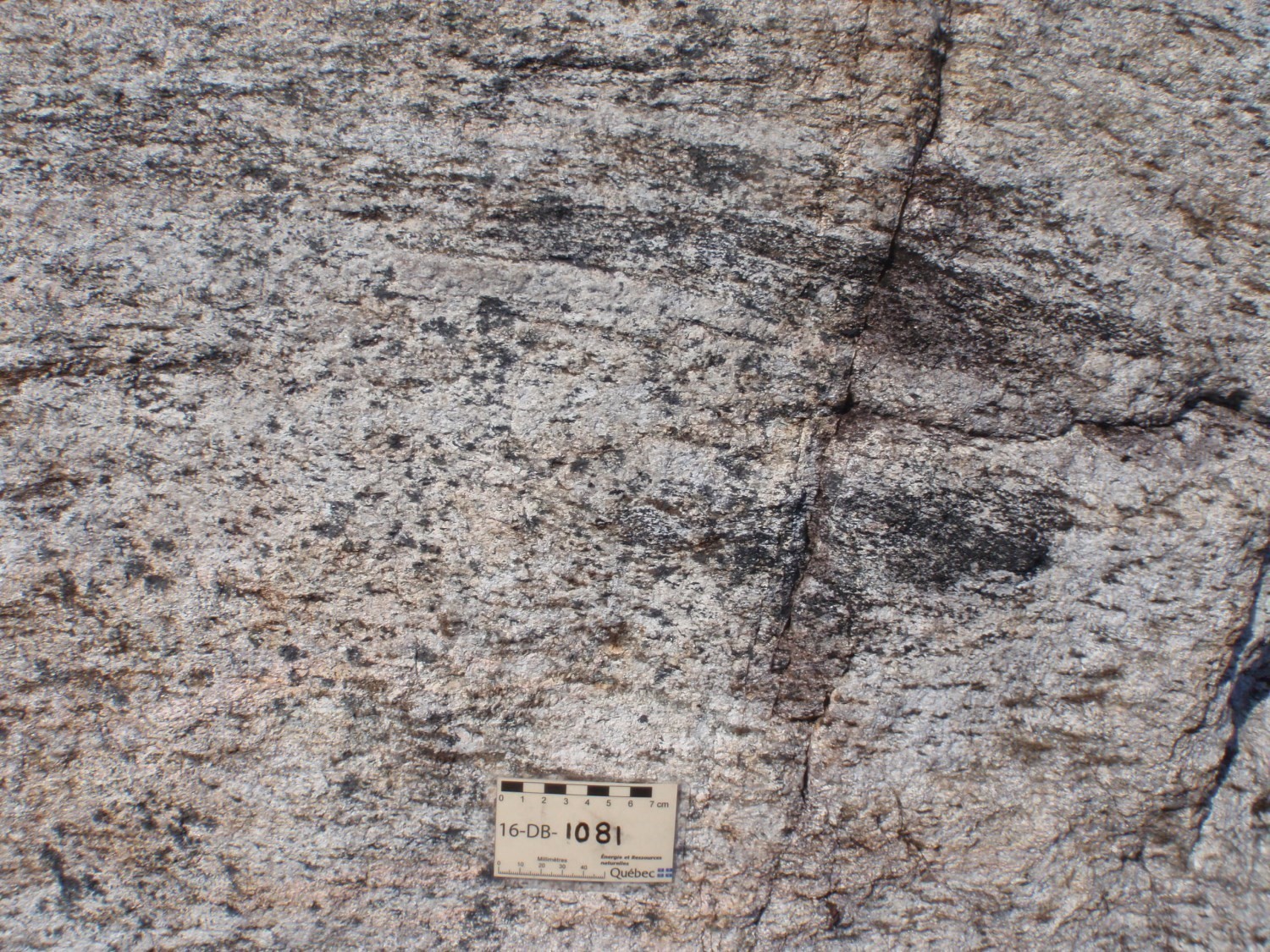 Unit Achp2 consists of tonalite and granodiorite in lesser proportions. Tonalite contains biotite (10%), hornblende (5%), magnetite (3%), and, in smaller proportions, epidote, sphene and apatite. The rock is medium-grained and locally hematitized. It is homogeneous or weakly foliated in appearance and has a granoblastic and equigranular texture. It is pale grey or pinkish white in altered surface and beige in fresh exposure. Unit Achp2 also contains bands of granodiorite that are difficult to distinguish from tonalite in outcrop. The latter also contains up to 10% medium-grained and granoblastic diorite enclaves characterized by a dark-grey alteration patina. Enclaves are flattened and elongated parallel to foliation planes.

Unit Achp3 is best exposed NE of the Lake Boisrobert area (sheet 32N11), close to the contact between the Champion Complex and the Anatacau-Pivert Formation. It consists of biotite-rich intermediate rocks that vary in composition from diorite to quartz diorite. These diorites are medium grained and homogeneous, weakly to strongly foliated and granoblastic. They are light grey in altered surface and beige in fresh exposure. The rock typically contains 40-60% of mafic minerals (hornblende and biotite) and 2% of magnetite. From a geochemical perspective, diorites and quartz diorites of unit Achp3 are metaluminous, of calc-alkaline affinity and characterized by the absence of europium anomaly. 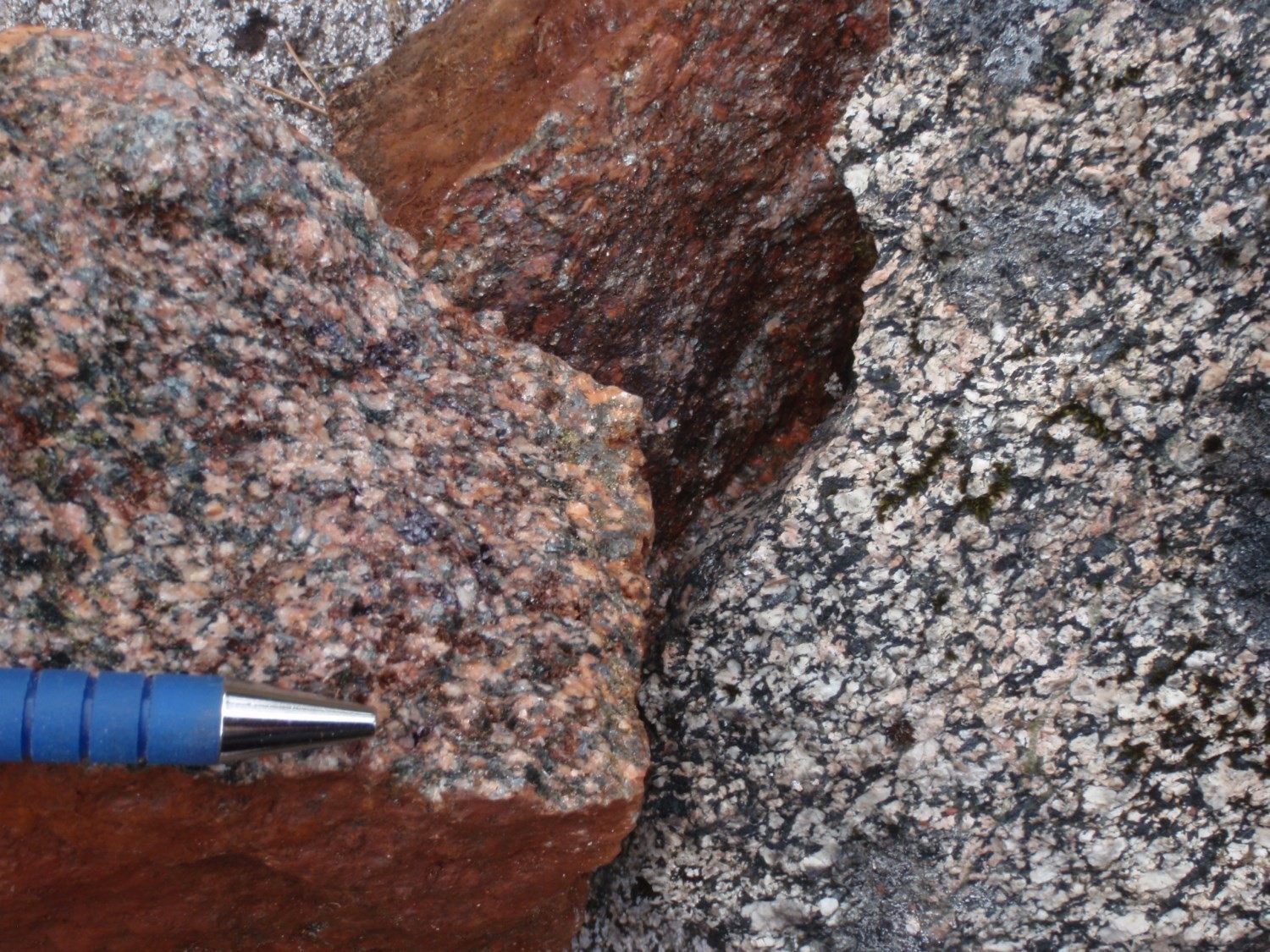 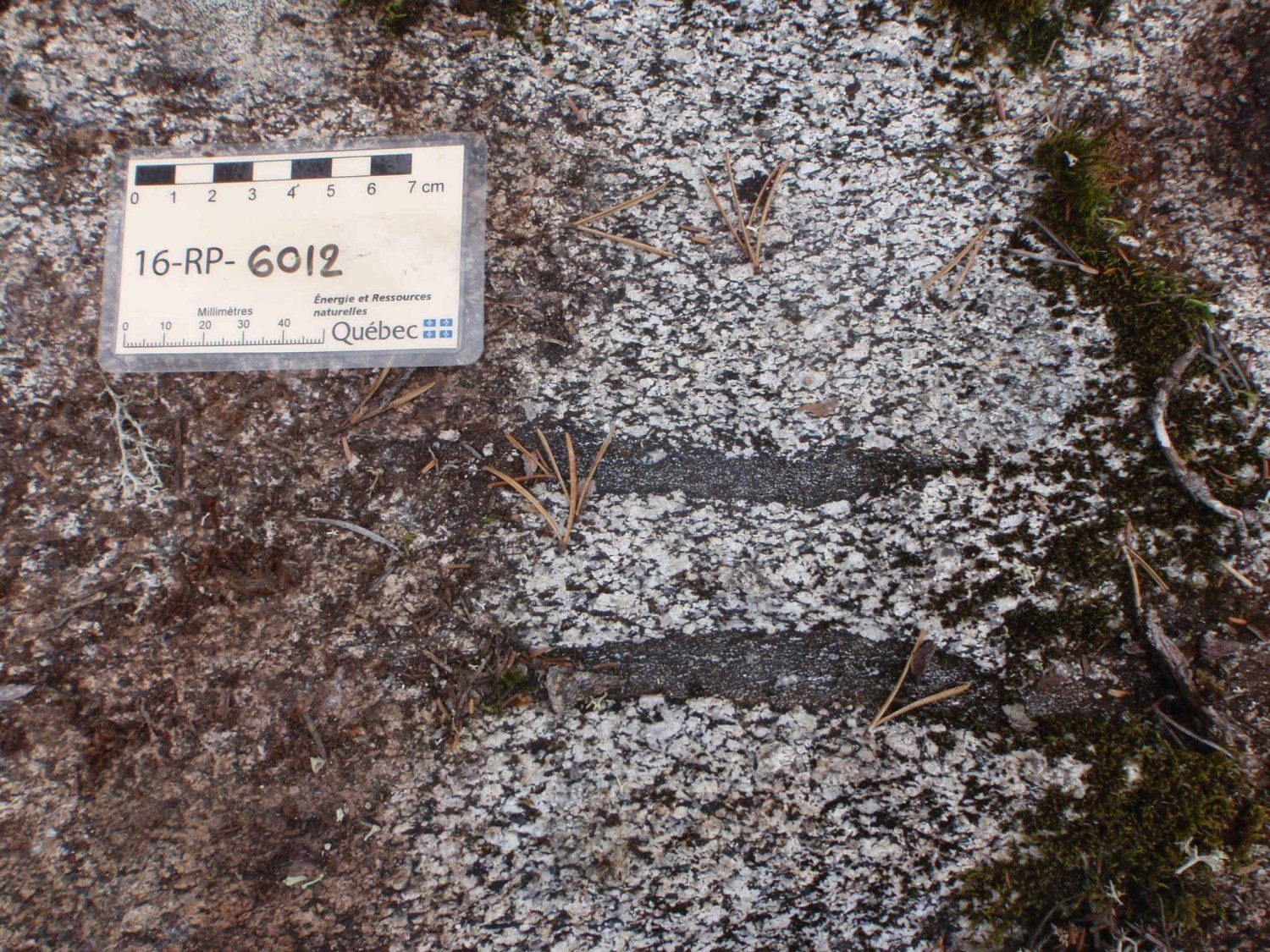 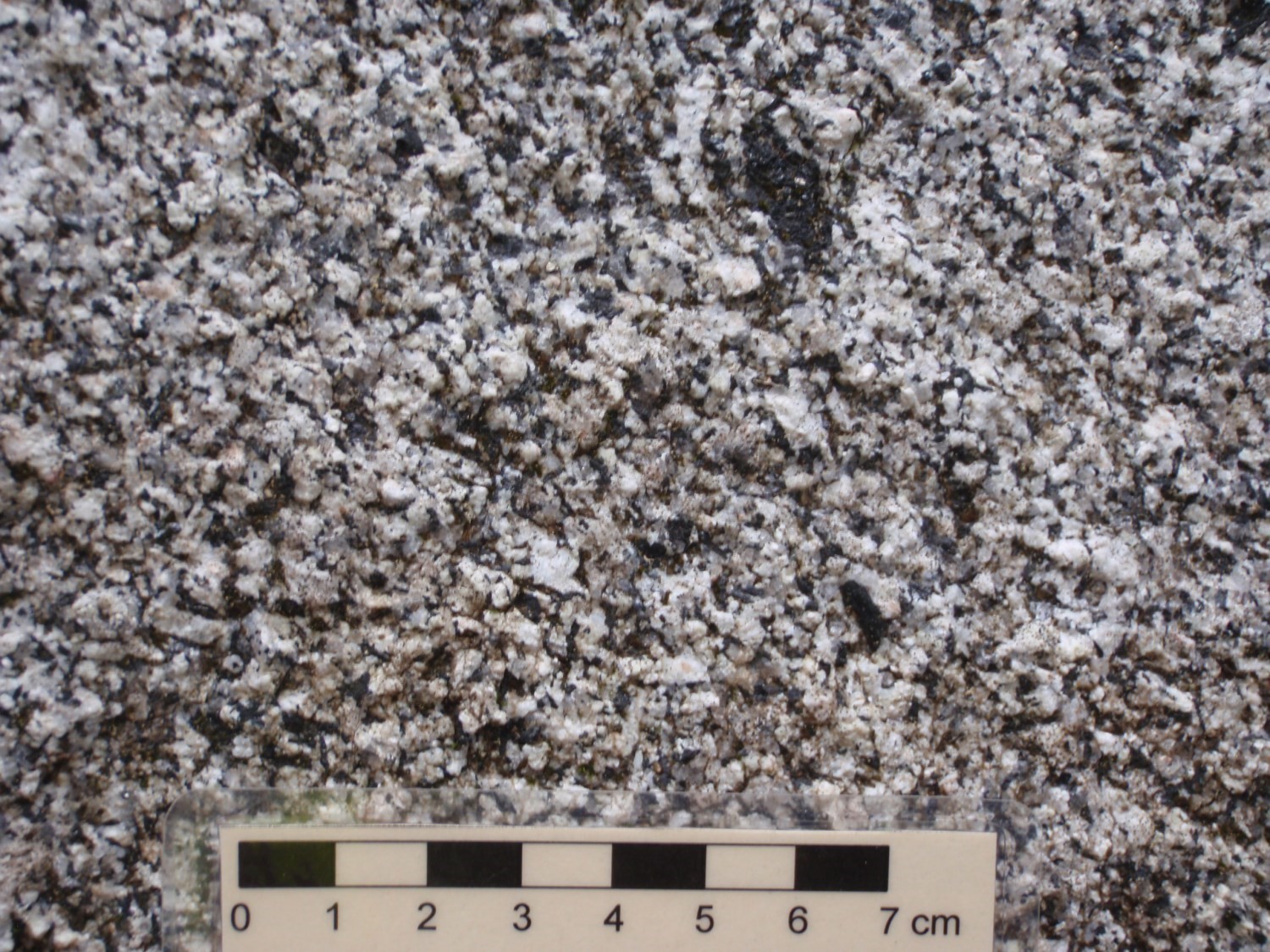 Subunit Achp3a is better exposed NE of Amikap Lake (sheet 32N11), following unit Achp3. It was created to describe a group of monzodiorite and quartz monzonite, generally foliated, locally massive, homogeneous and medium to coarse grained. These intermediate rocks are characterized by the presence of 20% disseminated euhedral to subhedral phenocrystals of plagioclase or K-feldspar, 0.5 to 1 cm (longest axis). The rock is white to slightly pinkish in altered surface and beige to pinkish grey in fresh exposure. The pinkish colour is due to hematization. The rock is weakly to strongly hematitized and contains chloritized hornblende (10-30%), biotite (5-15%), chlorite (1-10%), epidote disseminated or in veinlets (10%), and accessory apatite and allanite. Monzodiorite of subunit Achp3a also centimetric to metric enclaves of unit Achp3 fine-grained diorite, rich in mafic minerals (>55%), stretched parallel to foliation planes and partially assimilated. 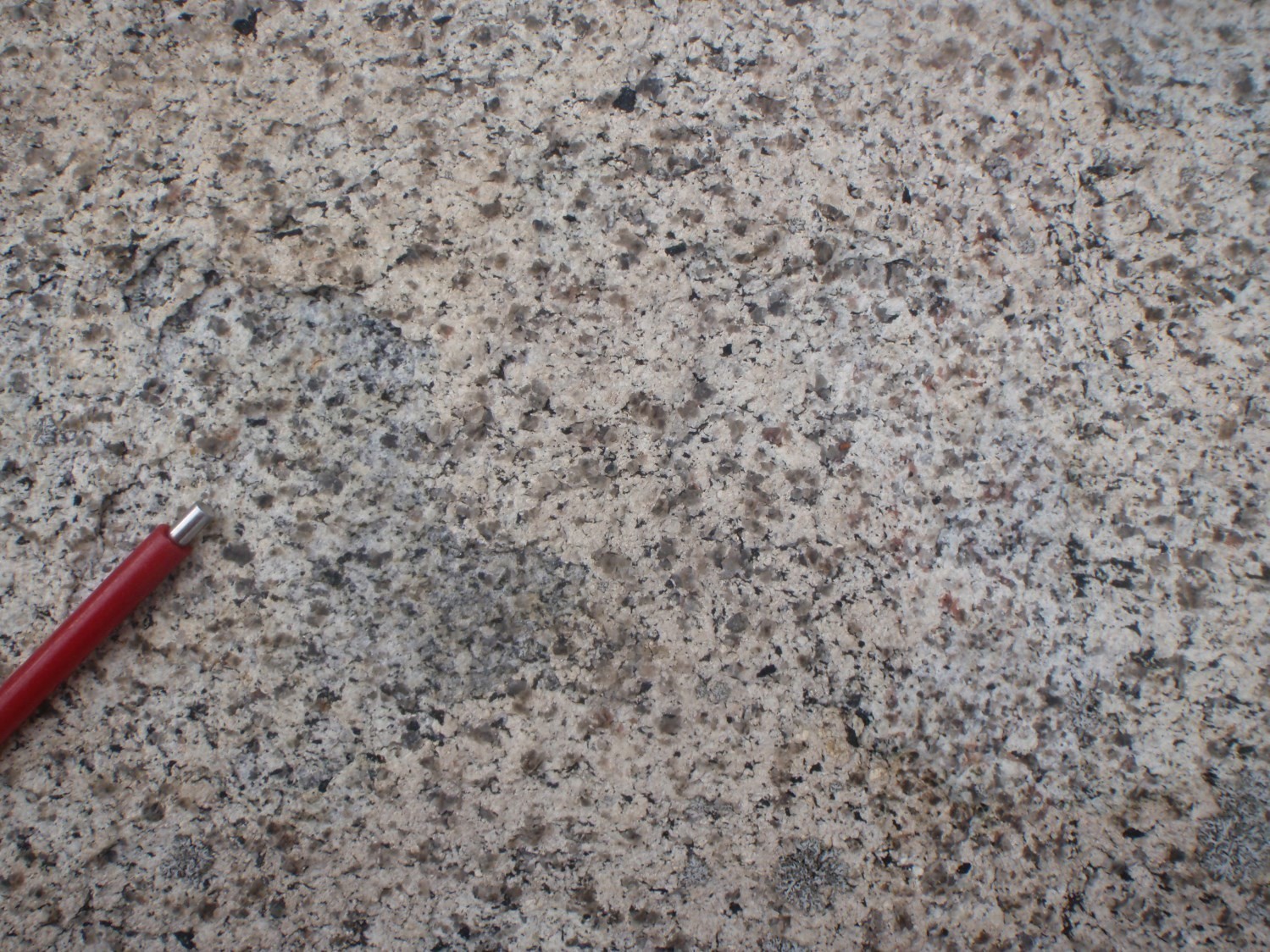 Unit Achp4 outcrops on the southern edge of the Champion Complex, between Nemiscau Lake and the Jolliet River (sheets 32N06 and 32N07). It is also observed in the Champion Lake area (32N09), north of the Nemiscau and Caumont lakes. Unit Achp4 is separated from the Lac des Montagnes Group by the RRSZ. On aeromagnetic maps, it is distinguished from the surrounding rocks by low magnetic susceptibility. This unit consists of medium-grained, homogeneous, weakly to strongly foliated granodiorite. Petrographic and geochemical analyses show that locally, unit Achp4 consists of tonalite. However, to the naked eye, these two rocks are very similar. The rock is light grey in altered surface, locally pinkish, and light grey in fresh exposure. It generally contains 10% biotite, 2-10% hornblende and 1-2% magnetite. The foliated rocks are also the richest in mafic minerals (hornblende and biotite) with contents of up to 20%. Unit Achp4 contains up to 10% centimetric to metric amphibolite and quartz diorite enclaves that contain up to 50% of hornblende. Geochemical analyses show that these rocks are the type I, bordering metaluminous and pareluminous, of calc-alkaline affinity and depleted to moderately enriched in potassium. 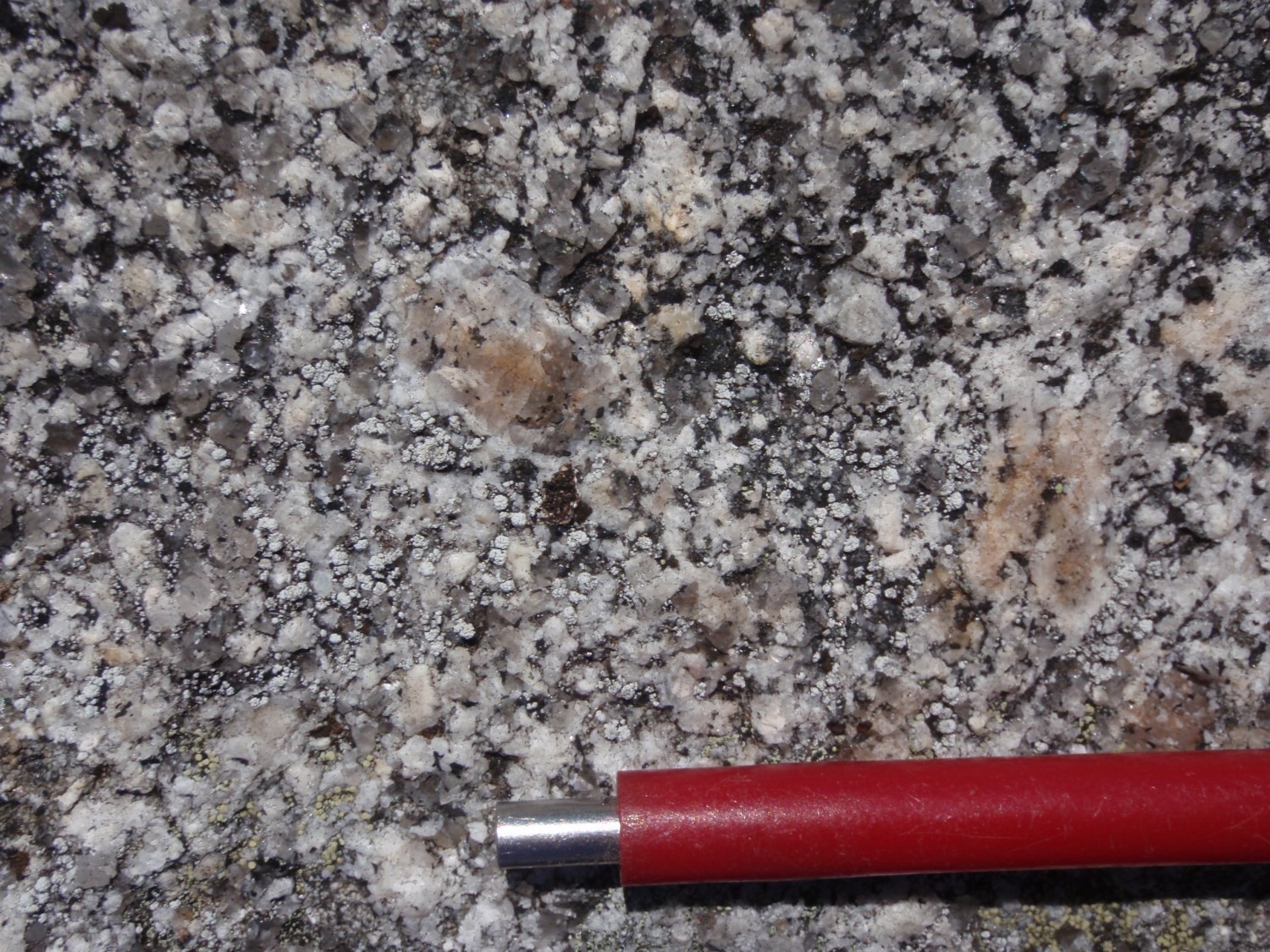 Unit Achp5 is located in the heart of the Champion Complex. It consists of granodiorite characterized by a porphyraceous texture linked to the presence of 1-2 cm long euhedral to subrounded K-feldspar phenocrystals. The proportion of phenocrystals varies from 2 to 20%, but is on average around 10%. In places, K-feldspar (orthose) phenocrystals have whitish plagioclase rims, giving the rock a rapakivi texture. Massive to weakly-foliated granodiorite is homogeneous, medium grained and usually magnetic. It is pinkish grey in fresh exposure and altered surface. Locally, a weak foliation is highlighted by the alignment of K-feldspar phenocrystals; it likely represents magmatic foliation associated with intrusion of the granodiorite. The rock contains less than 15% mafic minerals including partially chloritized biotite (10-15%) and hornblende (1-10%). Sphene, allanite and magnetite are the most common accessory minerals.

In places, outcrops assigned to unit Achp5 contain up to 30% of granite in diffuse or transitional contact with granodiorite. Unit Achp5 also contains metric to decametric enclaves of tonalite, amphibolite or diorite. 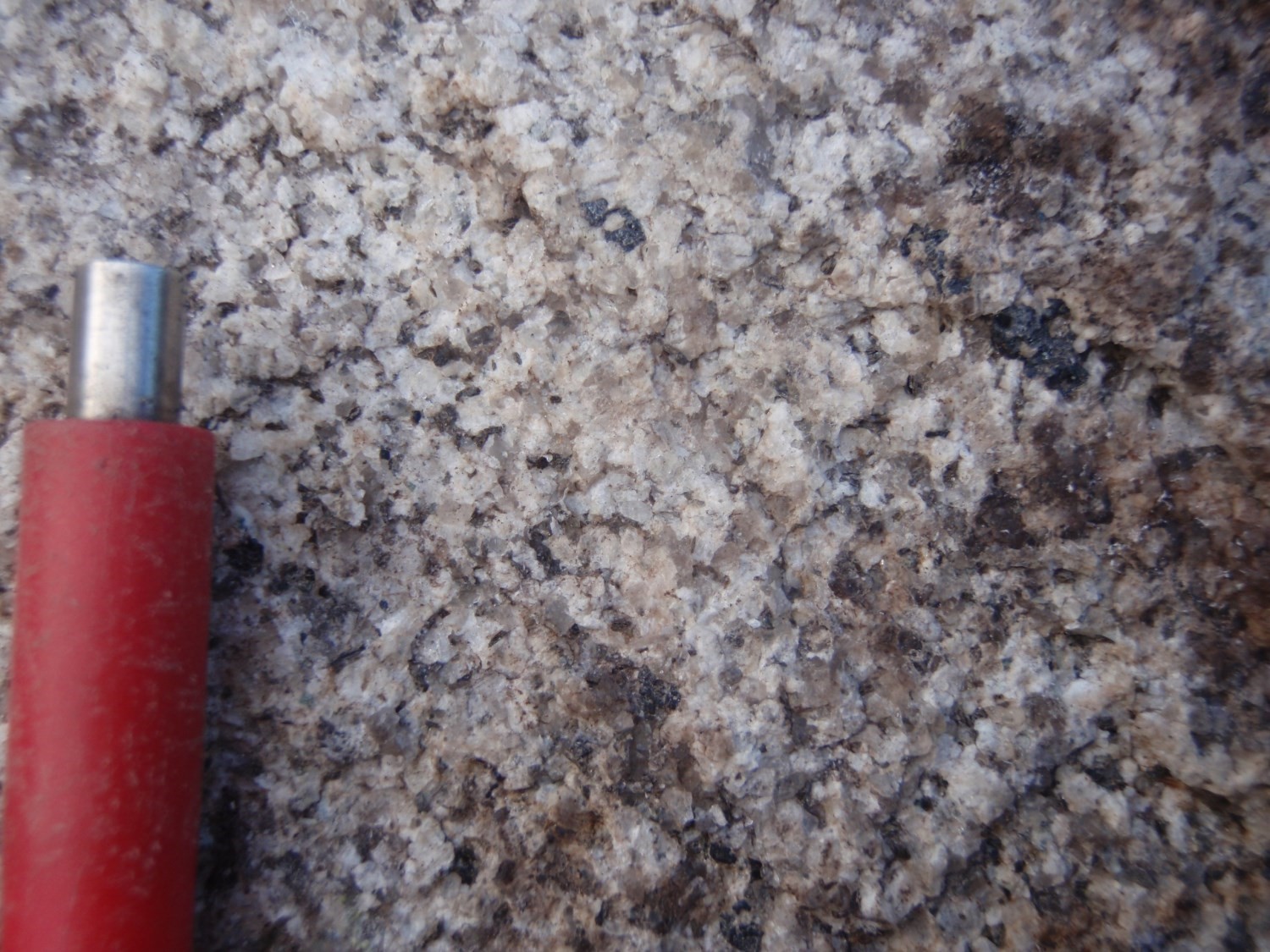 Unit Achp6 outcrops northeast of the Lake Boisrobert region (sheet 32N11), in contact with the Northern Anatacau-Pivert Formation and the Rupert Complex in the west and south. It consists of a package of granodiorite and granite characterized by a significant amount of migmatite and tonalitic or granodioritic gneiss enclaves. These enclaves generally show a very high degree of assimilation and form ribbons that resemble schlierens.

Granodiorite and granite are very heterogeneous lithologies, with a heterogranular and foliated texture, locally gneissic. These magnetic and hematitized rocks are brownish beige in altered surface and light grey in fresh exposure. They contain strongly chloritized biotite schlierens, hornblende and magnetite. Migmatite enclaves, consisting of migmatized paragneiss, metatexite and diatexite, are folded and stretched in foliation planes. The northern part of this unit, located in contact with the Anatacau-pivert Formation, is composed mainly of a homogeneous, massive to weakly foliated, pink granodiorite. Finally, this area is an area of high magnetic susceptibility.

The Champion Complex is the southern extension of the La Grande Subprovince. New geophysical and geological data show that this unit extends NE over a distance of 200 km and a width of 65 km. In the west end of the Rupert River, granitic and granodioritic rocks account for 80% of the Champion Complex. The oldest rocks in the Champion Complex are tonalitic gneiss, which are ~8 km wide and 20 km long.

During the work of Bandyayera and Daoudene (2018a) in the Nemiscau Lake area, a sample of gneiss belonging to the Champion Complex (Achp1) was taken from outcrop 2016-CS-4003, 8 km to the NW of Mézière Lake. This sample of tonalitic gneiss gave an age of 2815,8 ±3 Ma (David, 2020). Another sample also belonging to unit Achp1 was dated by Bynoe (2014). This granitic gneiss is located 1 km to the NE of the Spodumène Lake; it returned an age of 2889 ±14 Ma. These Mesoarchean ages are consistent with the hypothesis that Champion Complex gneiss are bedrocks and among the oldest in the region.