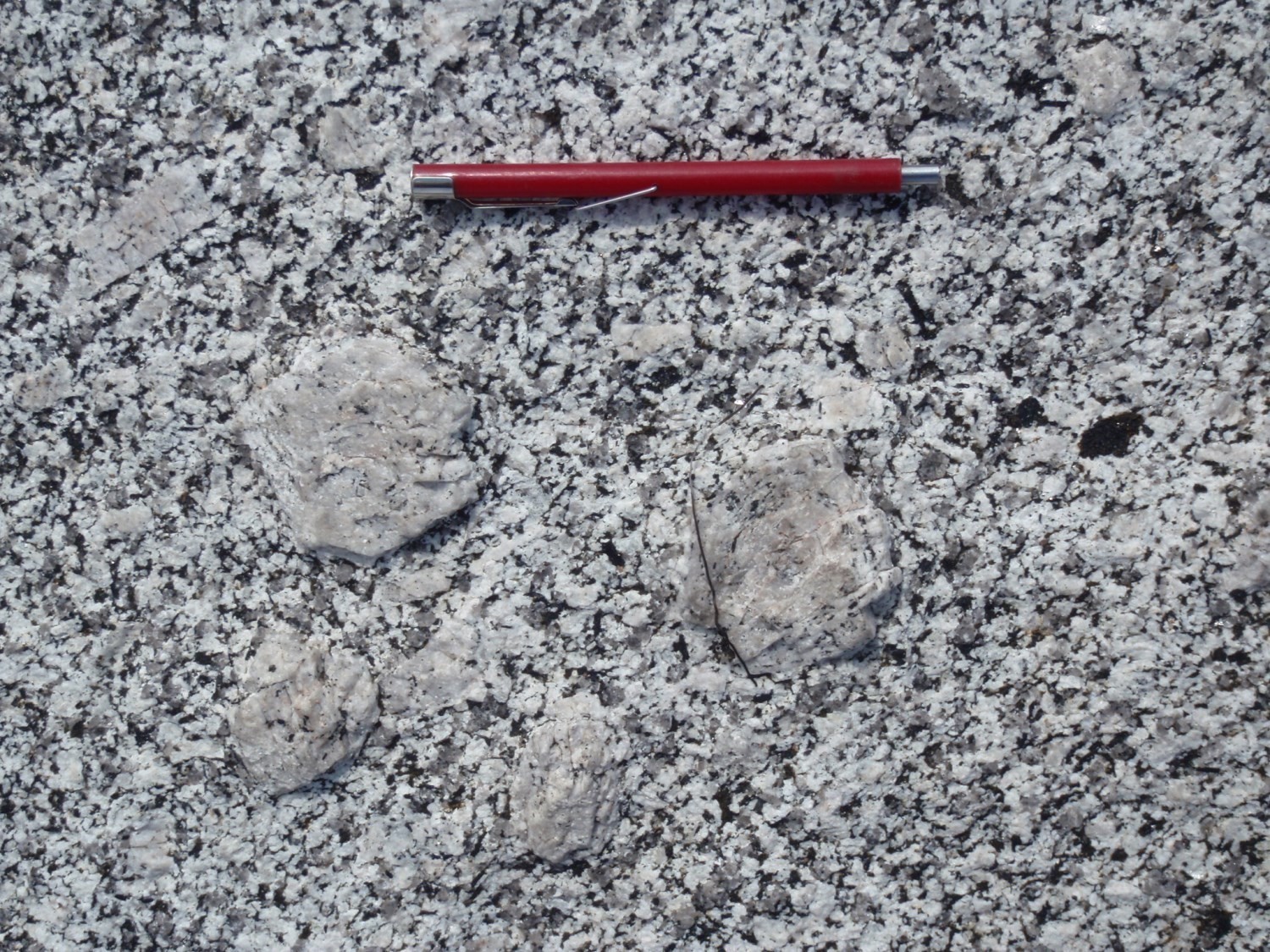 Works in the Rodayer Lake area (sheets 32K13, 32K14, 32N03 and NE quarter of sheet 32N04; Bandyayera and Daoudene, 2017) and in the Montagnes Lake area (sheets 32O11, 32O12, and 32O14; Bandyayera and Caron-Côté, 2019) show that gneiss of the Théodat Complex, interpreted as a package of syntectonic intrusions (Brisson et al., 1998a) or late-tectonic intrusions (Morin, 1998), are Mesoarchean (2833.5 ±3 Ma; David, 2020). These rocks are comparable to those of the Rodayer Pluton, interpreted as a tonalitic bedrock emplaced between 2830 Ma and 2820 Ma (Davis et al., 1994, 1995). According to this new geochronological and mapping data, a new subdivision of the Théodat Complex is proposed by Bandyayera and Caron-Côté (2019). Foliated to gneissic tonalitic and granodioritic rocks form the base of the complex interpreted as Archean bedrock. It is intruded by syntectonic to late-tectonic granodioritic, monzodioritic or granitic intrusions.

The Théodat Complex is one of the largest plutono-gneissic masses in the Opatica Subprovince, limited to the north by the Nemiscau and Opinaca subprovinces, and to the south by the Frotet-Evans Volcano-Sedimentary Belt. This complex is the eastward extension of the Lac Rodayer Pluton, interpreted as Mesoarchean tonalitic basement, emplaced between 2830 Ma and 2820 Ma (Davis et al., 1994, 1995), and intruded by several generations of granitoids. In the vicinity and within the Poste Albanel Shear Zone that separates the Théodat Complex from the Nemiscau Subprovince, rocks are mylonitized, folded and sheared. The Théodat Complex consists of five units: 1) gneissic rocks (Athe1); 2) foliated granodiorite (Athe2); 3) porphyritic granodiorite (Athe3); 4) biotite granite (Athe4); and 5) granitic pegmatite (Athe5). 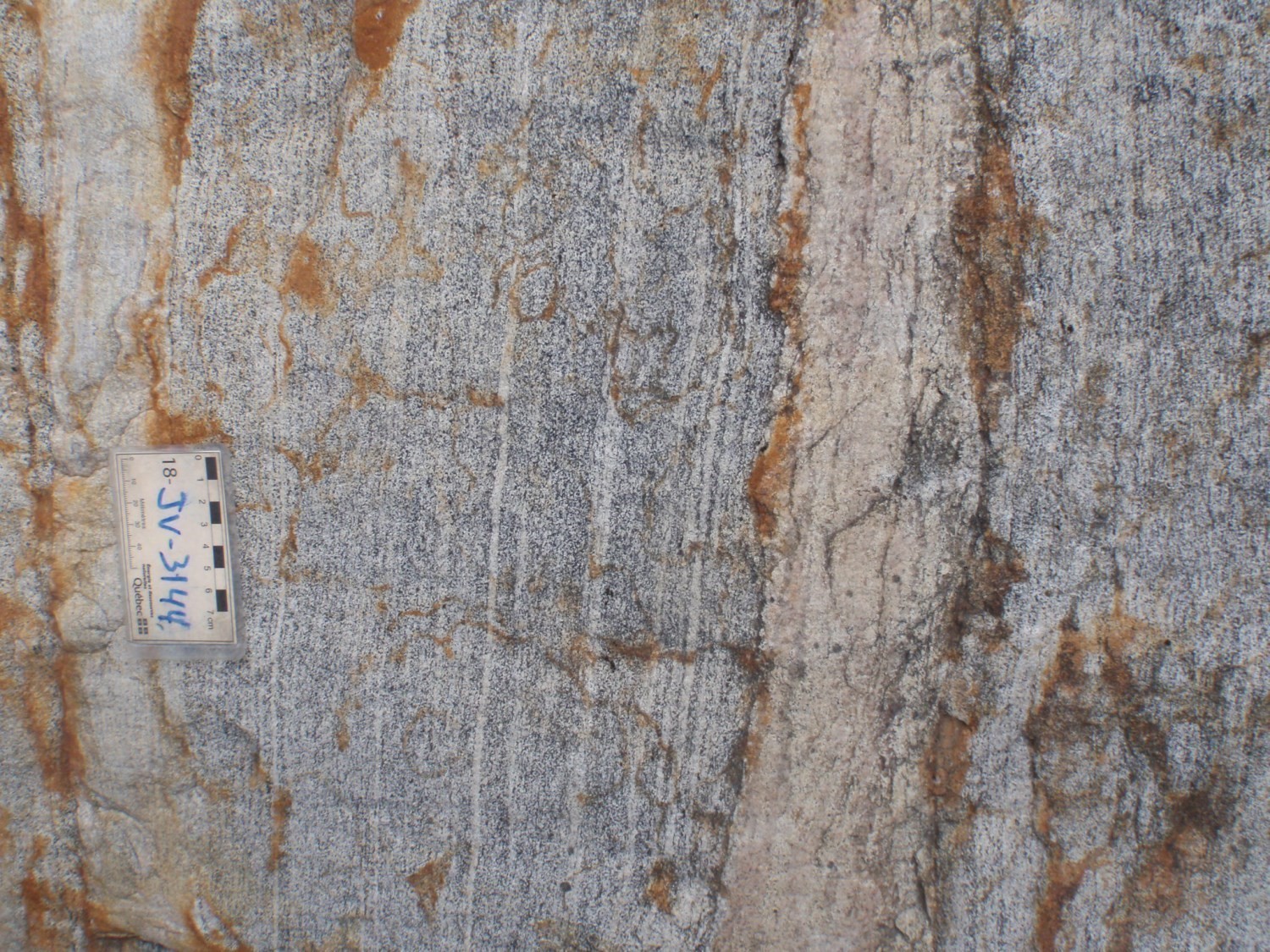 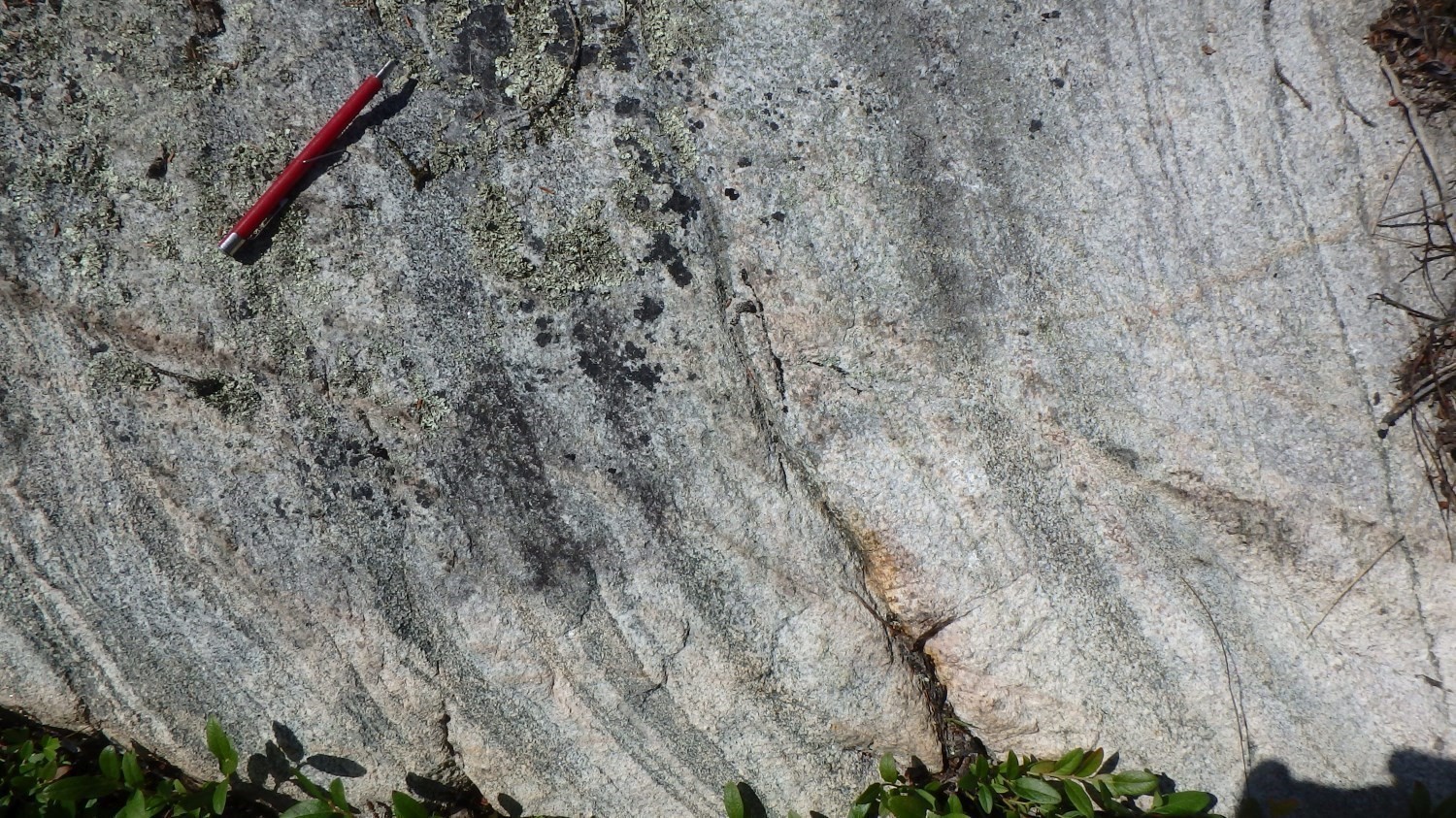 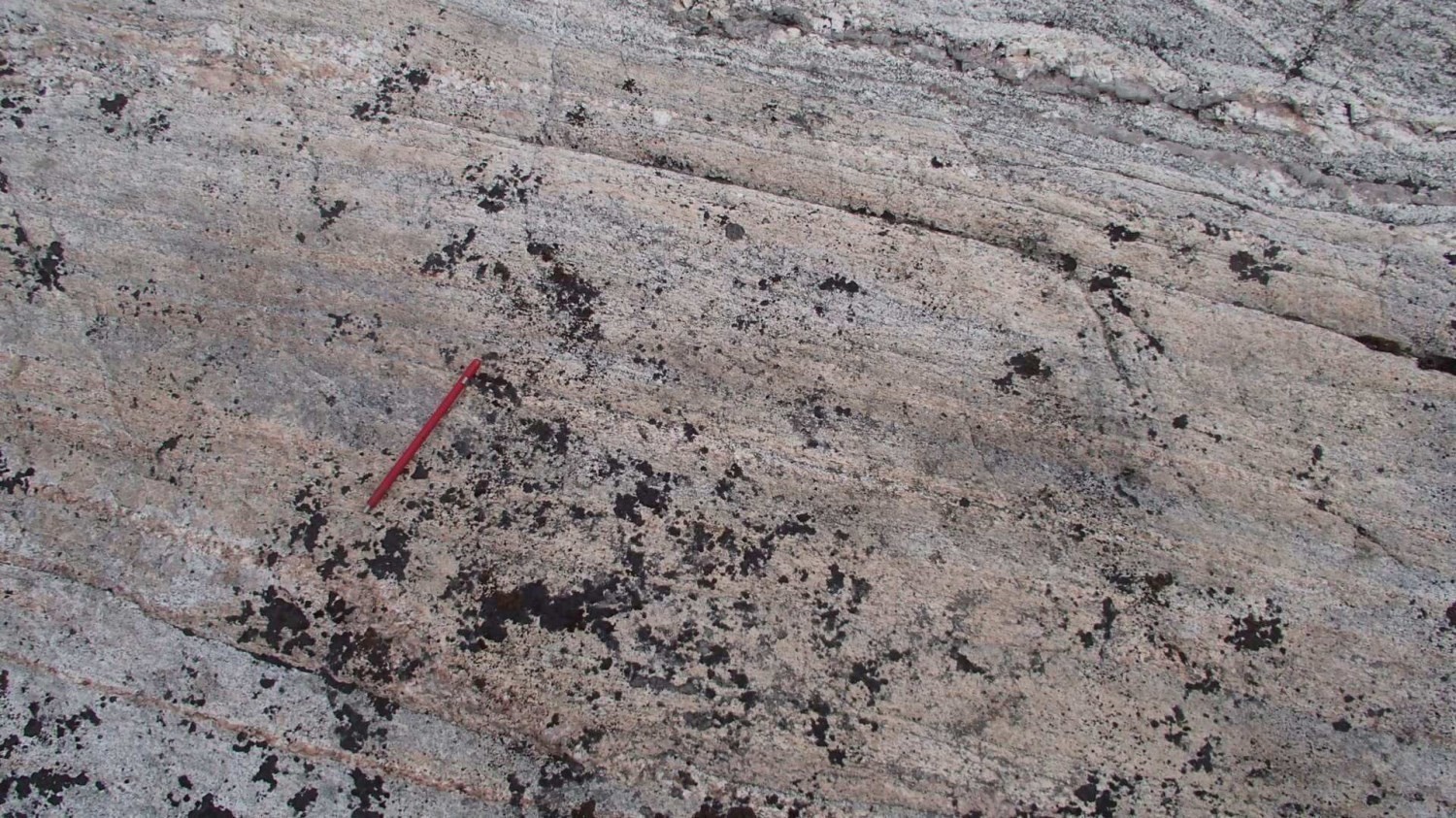 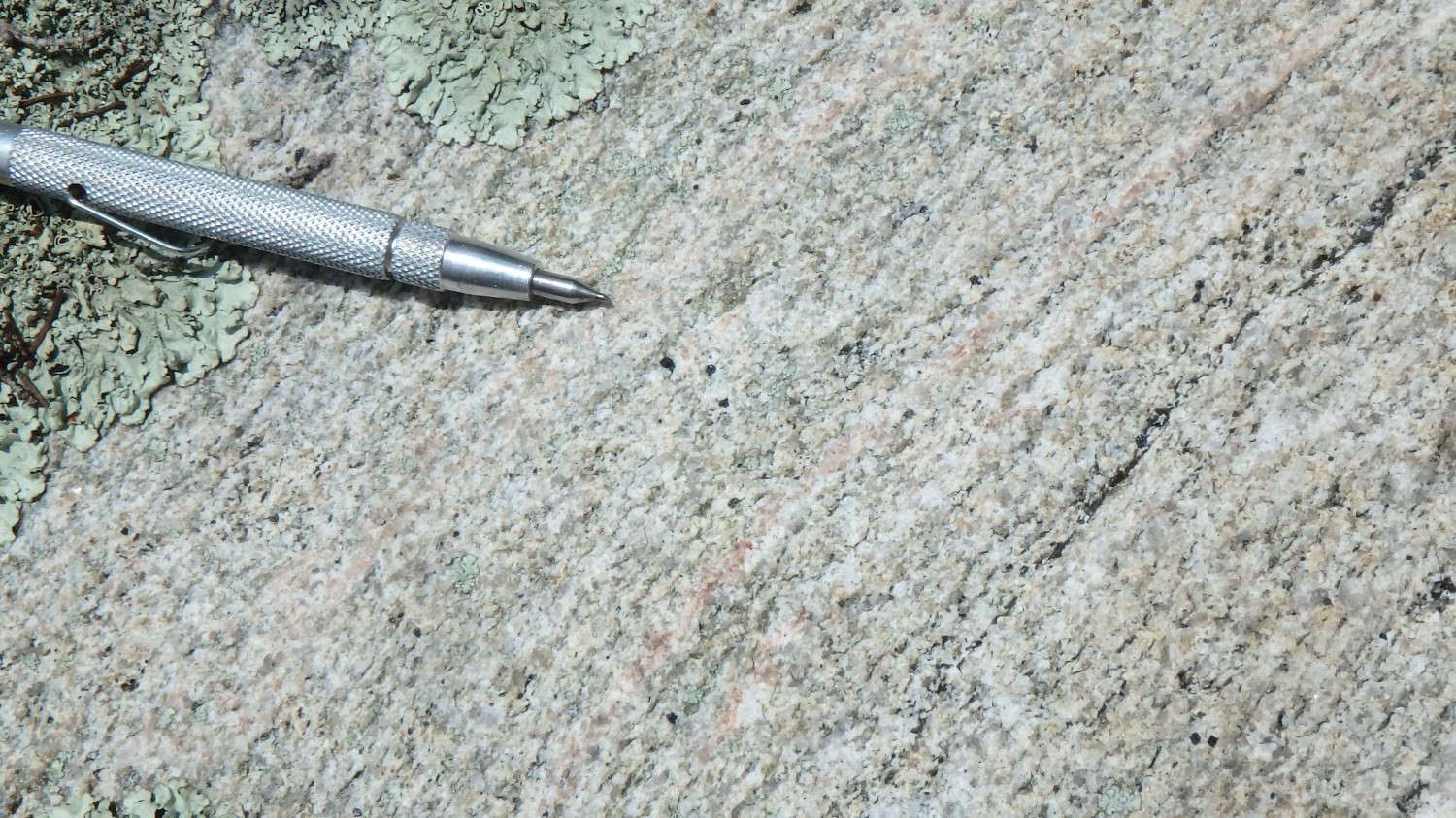 Unit Athe1 consists of tonalitic gneiss, homogeneous to heterogeneous, granoblastic, locally schistose and sheared. The rock is slightly magnetic, grey in fresh exposure and beige to greyish beige in altered surface. Gneissosity is characterized by alternating millimetric to centimetric bands rich in ferromagnesian minerals, irregular and discontinuous, and feldspar-rich light bands. Leucocratic bands are tonalitic, granodioritic to locally granitic, while melanocratic bands are dioritic or tonalitic. This gneissosity is accentuated by the presence of granite intrusion bands parallel or subparallel to foliation planes. The rock typically contains 2 to 15% biotite in leucocratic horizons and bands, and 15 to 30% biotite in melanocratic horizons. Tonalitic gneiss locally contains hornblende (1-10%) and magnetite (1%). Unit Athe1 contains in places heterogeneous recrystallized horizons with typically high biotite contents reaching 20% of the rock. These horizons are weakly migmatized and contain up to 5% granitic mobilisate rich in biotite schlierens.

Unit Athe1 contains significant decametric to hectometric strips of foliated biotite tonalite, locally very magnetic, that are grey in fresh exposure and greyish beige in altered surface, showing a pinkish colour locally. The rock is medium grained, generally homogeneous, locally heterogeneous and gneissic. Foliated tonalite contains up to 10% tonalitic gneiss and diorite enclaves that are partially assimilated, elongated and stretched parallel to foliation planes. In tonalitic gneiss, 5 to 15% of diorite enclaves usually occur as centimetric to metric klippes, foliated, partially assimilated and discontinuous. Unit Athe1 also contains enclaves of migmatitic rocks derived from hornblende-biotite gneiss, containing up to 3% magnetite. Migmatite has a nebulitic texture in places where migmatitic banding overlaps with gneissic banding. The rock contains between 20 and 30% of mobilisate. Scarce amphibolite enclaves are also present in this unit. These are highly foliated and locally banded. Amphibolites occur in places as klippes of coarse-grained amphibolitized gabbro, migmatized and containing up to 15% granitic mobilisate in veins or clusters.

Dioritic gneiss are found throughout tonalitic gneiss outcrops and have been assigned to subunit Athe1a. It occurs as metric to decametric strips or enclaves that remain poorly mapped at a 1:50 000 scale. It consists of black to dark grey diorite in altered surface, greenish grey or light grey in fresh exposure. It is gneissic to foliated, homogeneous, granoblastic, fine to medium grained. Diorite is locally highly deformed and banded. The rock may contain up to 60% hornblende and 15% biotite.

Subunit Athe1b was recognized east of sheet 32N08, at the contact between the La Sicotière Suite and tonalitic gneiss and granodiorite of the Champion Complex. It consists of diatexite derived from partial melting of tonalitic and dioritic gneiss of unit Athe1 and subunit Athe1a. The tonalitic to granitic mobilisate constitutes 50 to 90% of diatexite. It consists of in situ or segregated leucosome, containing biotite and hornblende schlierens, heterogranular and locally banded. The nebulitic texture, also very common, is characterized by the presence of relics of melted diorite enclaves infiltrated by diffuse leucosome and included in the heterogranular mobilisate. In addition, subunit Athe1b contains 10 to 30% of partially assimilated enclaves of tonalite, diorite and amphibolite. 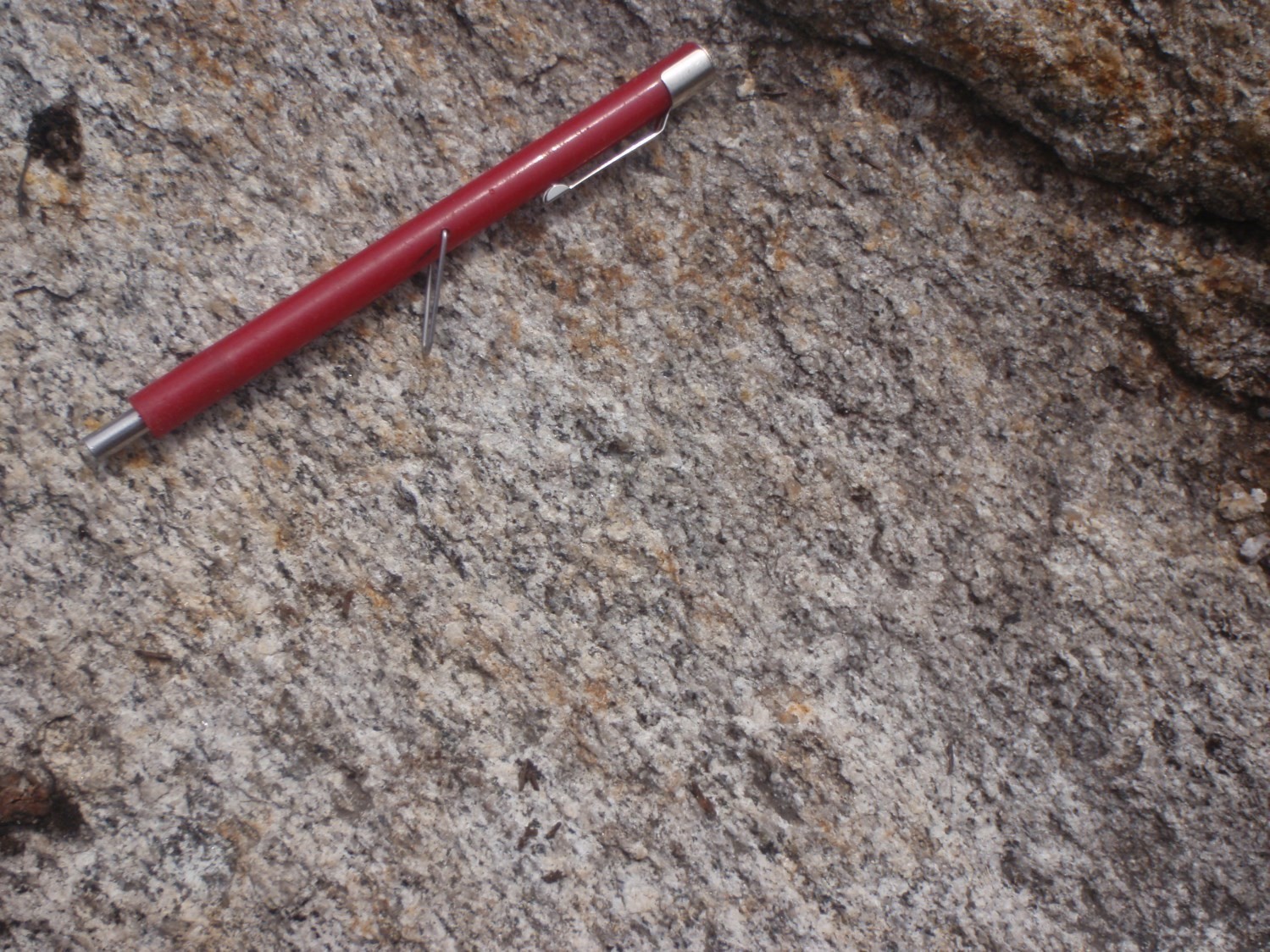 Unit Athe2 consists of biotite ± hornblende granodiorite, grey beige to whitish pink in altered surface and beige to medium light pinkish grey in fresh exposure. The rock is fine to medium grained, locally coarse grained, homogeneous, weakly to highly foliated, hematitized and slightly magnetic in some areas. It generally contains 2 to 15% biotite, locally 20 to 25%. Hornblende (≤10%) and magnetite (≤2%) are also observed in places. Ferromagnesian minerals occur in places as very magnetic clusters, while the rest of the rock is weakly or not magnetic. The medium-grained or coarse-grained rock is the least deformed and contains more hornblende than biotite. The fine-grained granodioritic phase is so similar to the foliated tonalite of unit Athe2a that it is locally difficult to differentiate them in outcrop. 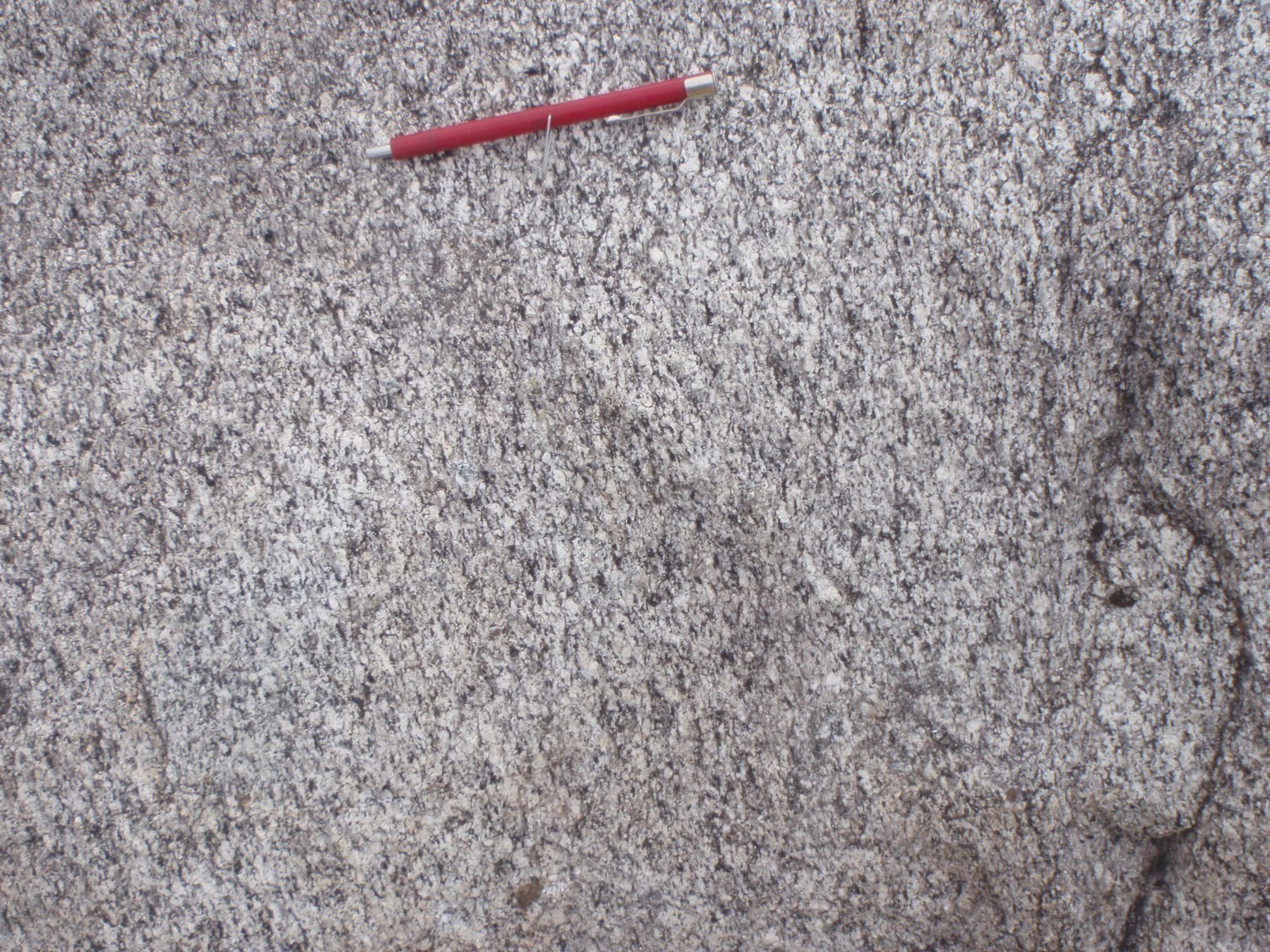 Unit Athe2a consists of tonalitic rocks that, in outcrop, resemble the fine to medium-grained granodiorite of unit Athe2. The rock is dark grey to pinkish grey in fresh exposure and beige or whitish grey in altered surface. Tonalite is distinguished from granodiorite by the presence of foliated diorite enclaves that form 1 to 10% of the rock. Subunit Athe2a also contains metric to decametric tonalitic gneiss enclaves. Biotite±hornblende is weakly to highly foliated. It is medium grained, locally fine grained, typically homogeneous. K-feldspar makes up <10% of the rock, while ferromagnesian minerals (biotite, hornblende, epidote, chlorite) represent up to 25%. The rock typically contains 5 to 15% biotite, but 20 to 25% locally. Hornblende (≤5%) and magnetite (1%) are also present. Accessory minerals are sphene and magnetite. 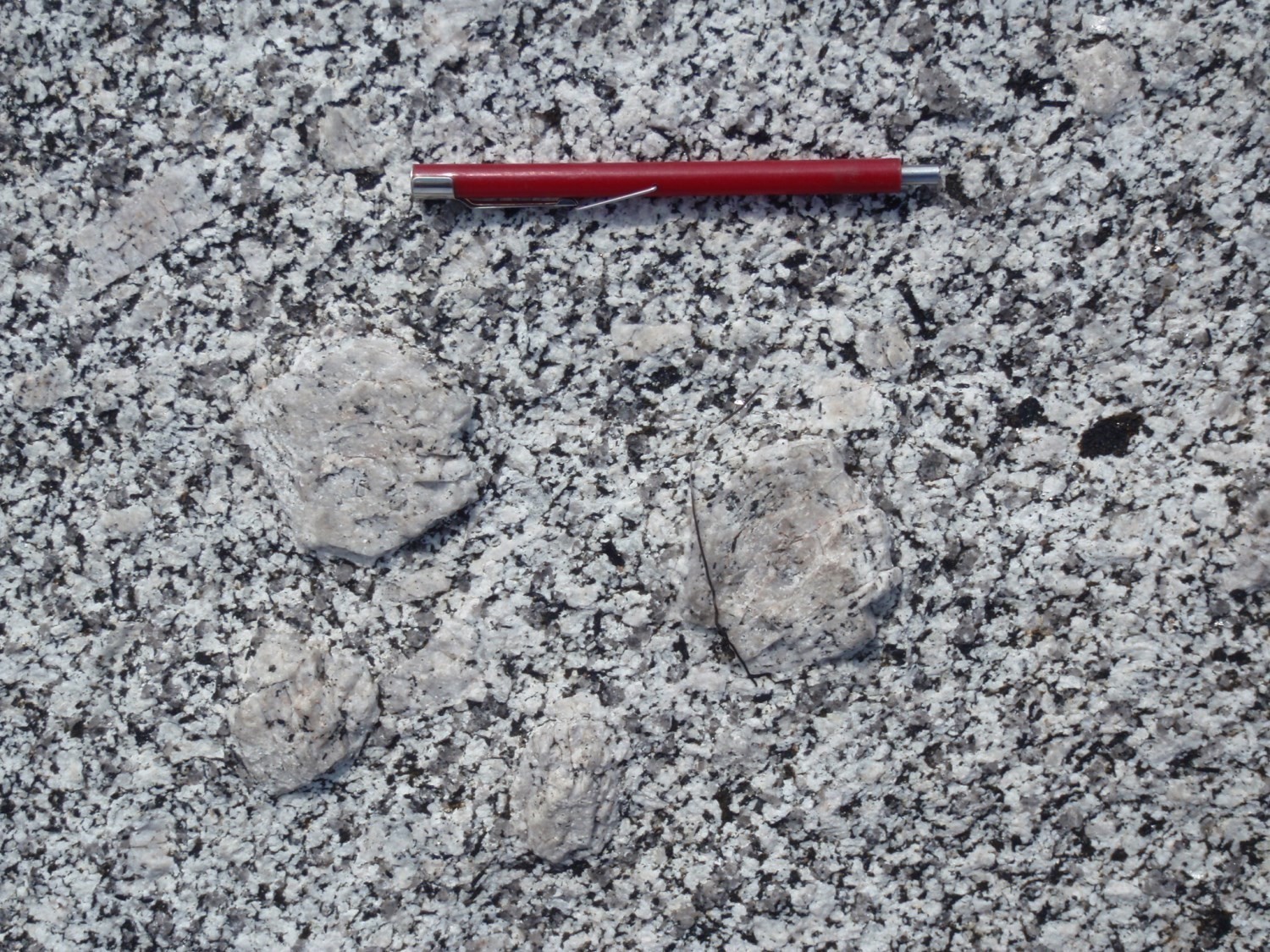 The porphyritic hornblende-biotite granodiorite unit (Athe3) occurs as more or less rounded or oblong masses within the Théodat Complex, and generally within units Athe1 or Athe2. It is characterized by a strong, distinct magnetic susceptibility on regional aeromagnetic maps (D’Amours and Intissar, 2012; D’Amours, 2011). The rock is light grey in fresh exposure and whitish to pinkish grey in altered surface. It is massive to foliated, homogeneous, medium to coarse grained and characterized by a porphyraceous texture. It contains K-feldspar phenocrystals, euhedral to subhedral, locally subrounded, disseminated in a medium to coarse-grained matrix. Their content ranges from 10 to 30% and their size from 0.5 to 3 cm, locally >3 cm. In places, the preferential alignment of feldspar phenocrystals highlights a magmatic foliation. K-feldspar phenocrystals commonly contain hornblende or biotite inclusions. They locally feature whitish reaction rim, typical of a rapakivi texture. Quartz is grey, millimetric and represents 25% of the rock. Ferromagnesian minerals include hornblende (8-20%) and biotite (5-10%). The rock generally contains 1 to 3% disseminated magnetite. Unit Athe3 also contains 1 to 3% highly-deformed porphyraceous monzodiorite enclaves, more or less aligned with foliation planes of the porphyraceous granodiorite host. These enclaves are black with a grey to whitish alteration patina, and are more deformed or foliated than the host rock. The deformation also affects feldspar phenocrystals. These enclaves contain hornblende (30%), biotite (5%), magnetite (1%) and K-feldspar phenocrystals (3-10%). 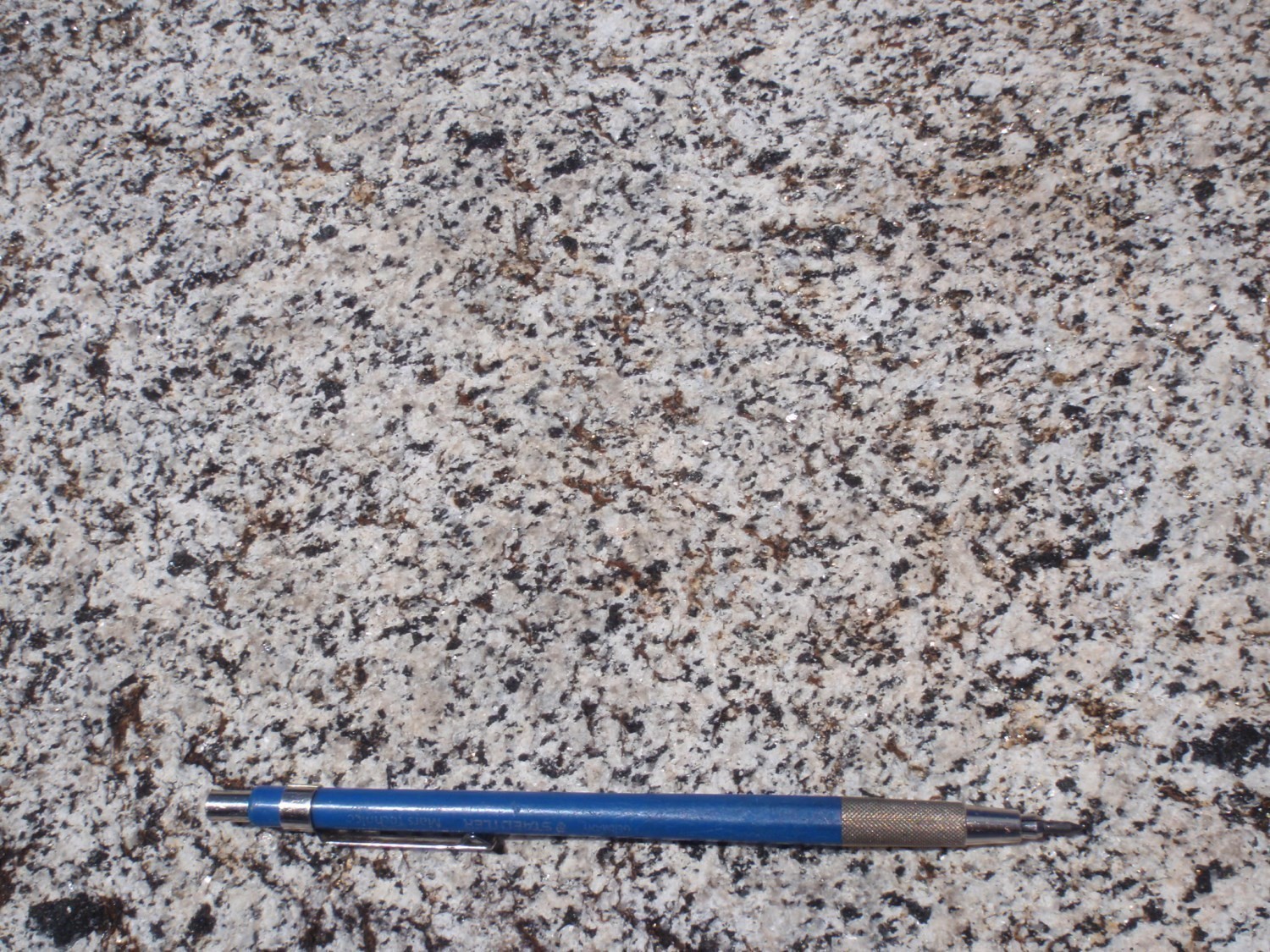 Subunit Athe3a is observed in the SW corner of the Goulde Lake area (sheet 32O11), in spatial association with the porphyritic granodiorite of unit Athe3. It consists of porphyraceous quartz monzodiorite, quartz monzonite and locally granodiorite. These rocks are also characterized by centimetric hornblende clusters and the ubiquitous presence of diorite enclaves. These rocks are medium to coarse grained, weakly to strongly foliated, homogeneous and magnetic. They are pinkish grey to whitish pink in altered surface and medium light grey in fresh exposure. The pinkish colour is locally accentuated by strong hematitization. These rocks are characterized by 5 to 30% centimetric K-feldspar phenocrystals or porphyroclasts, euhedral to subhedral locally, more or less aligned with foliation planes. Ferromagnesian minerals mark foliation and commonly form small elongated centimetric hornblende clusters. The rock contains 10- to 20% hornblende (locally up to 40%), 5 to 25% biotite and 2% magnetite locally. Accessory minerals are abundant and include sphene, epidote, muscovite, chlorite, allanite, apatite and opaque minerals. 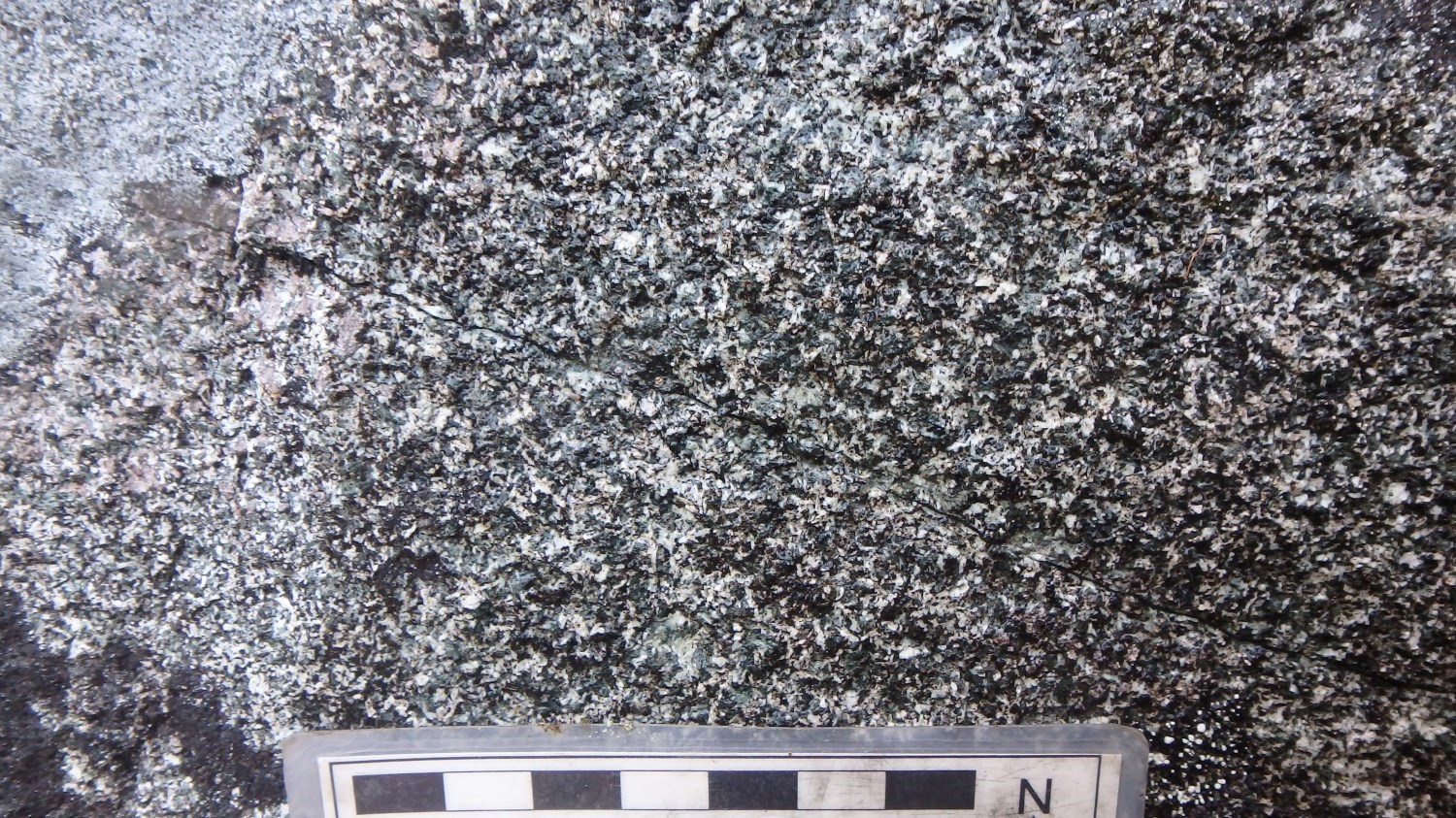 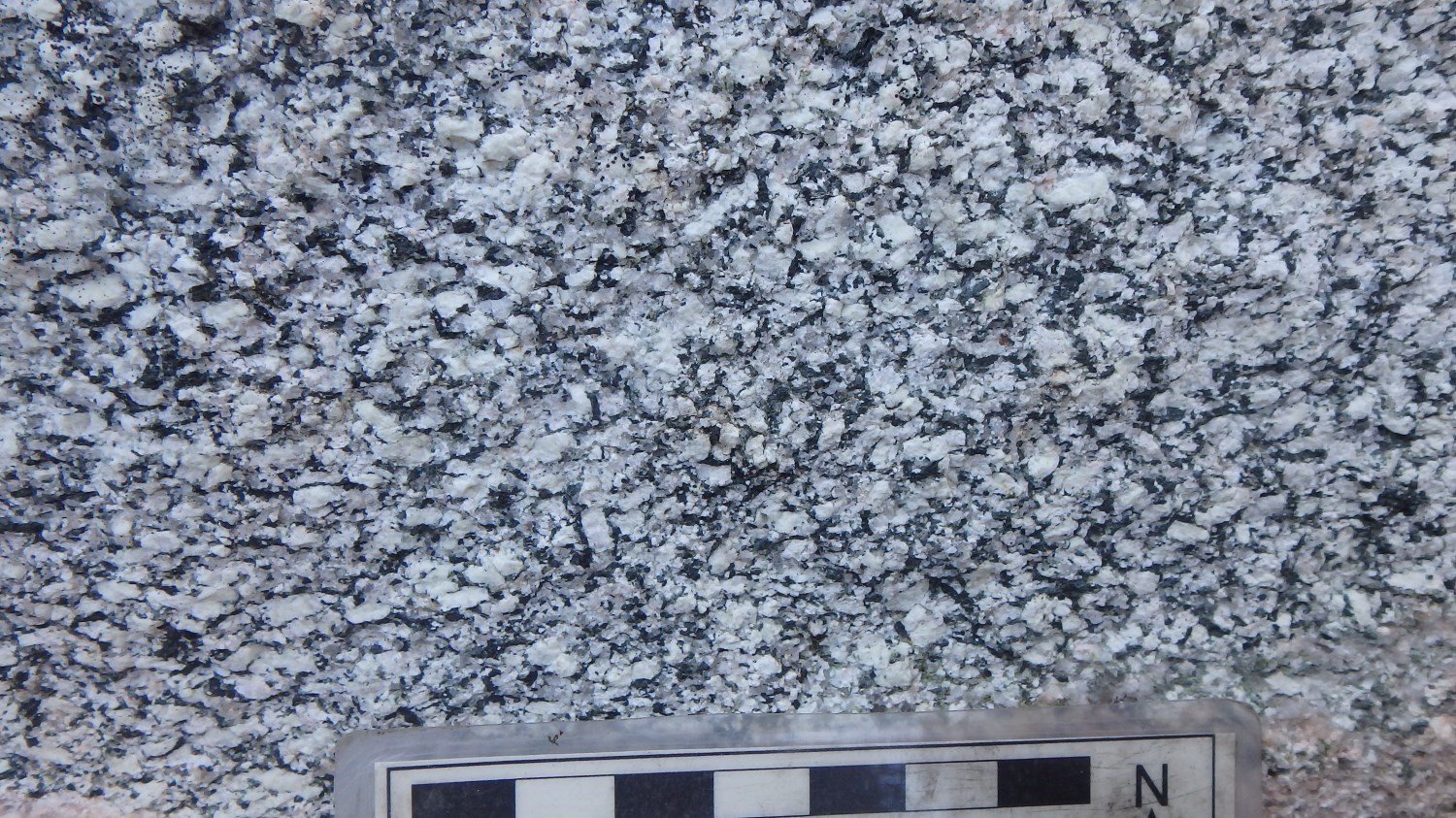 Unit Athe3b is observed north of the Lucky Strike Creek area (sheet 32J12), which is within porphyritic granodiorite of unit Athe3 (Bandyayera and Caron-Côté, 2021). It consists of foliated diorite and quartz diorite. The rock is medium grained, granoblastic, homogeneous, foliated and moderately magnetic. It is greyish in fresh exposure and greyish beige in altered surface. Locally, the rock contains 5% K-feldspar phenocrystals and corresponds to a monzodiorite. Diorite is composed of saussuritized plagioclase (60%), hornblende (25-35%), biotite (3-5%), epidote (3-5%) and magnetite (1-3%). Accessory minerals include sphene, muscovite, chlorite, allanite, apatite and opaque minerals. 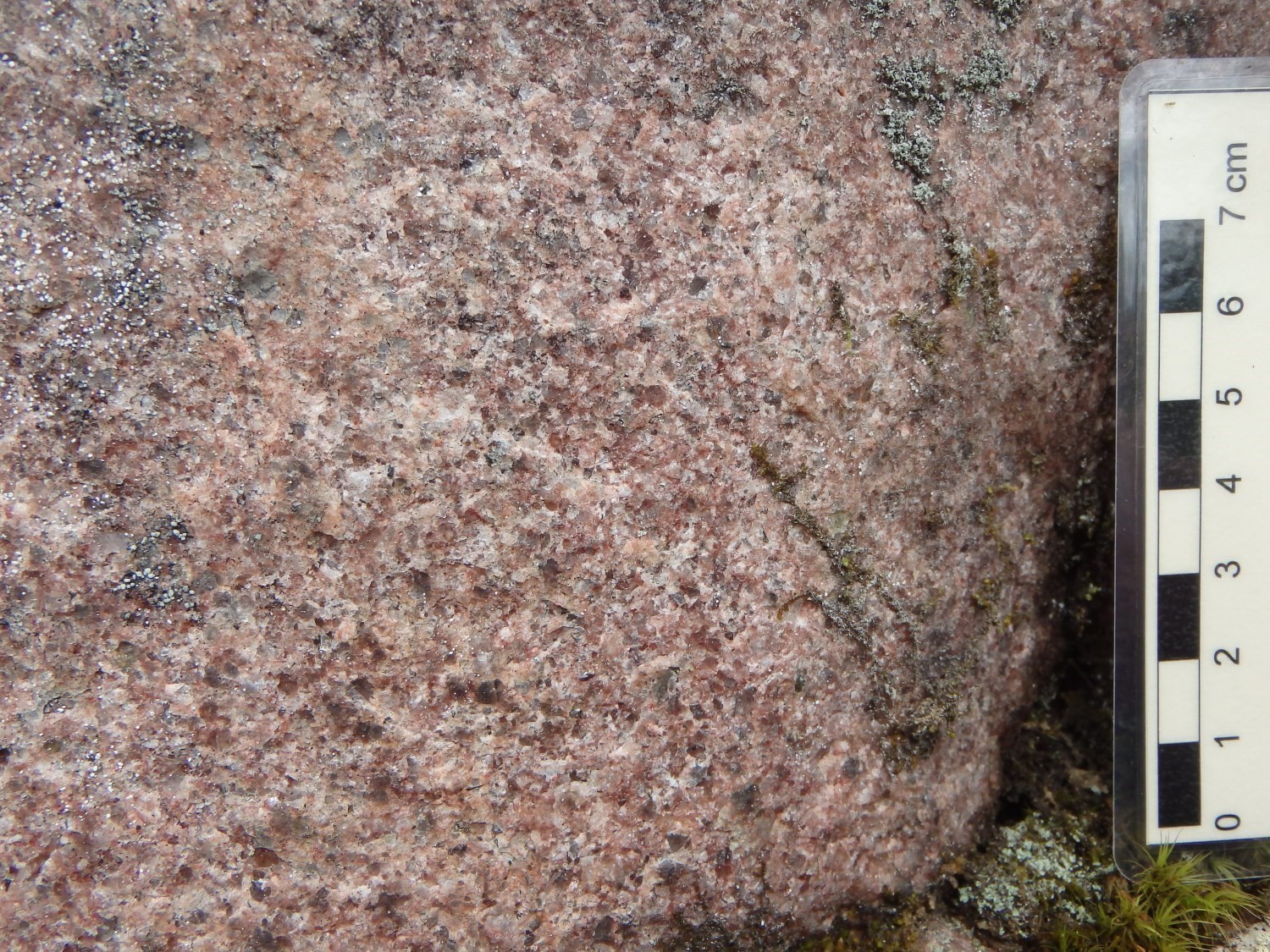 Unit Athe4 occurs as decametric to kilometric intrusions in the Théodat Complex. It consists of pink biotite±magnetite granite. The rock is pinkish beige in fresh exposure and light pink to pinkish grey in altered surface. It is medium to coarse grained, locally pegmatitic, massive, slightly to highly magnetic. Unit Athe4 contains decametric enclaves of foliated to gneissic tonalitic rocks. Unit Athe4 is very poor in ferromagnesian minerals (<5%) and contains no garnet. The main rock minerals are quartz, plagioclase, partially chloritized biotite (<5%) and magnetite (1-5%). Accessory apatite and zircon are observed in thin section. Unit Athe5 consists of granitic pegmatite that is typically light pink, usually massive, and displaying a widespread graphic texture. The rock is magnetic, heterogranular, commonly pegmatitic or coarse grained, locally medium grained and weakly to highly hematitized. Hematitization gives the rock a reddish colour in some places. Granitic pegmatite is also distinguished by low ferromagnesian mineral contents representing <5% of the rock. It contains 1 to 3% biotite (5% locally) and 1 to 3% disseminated millimetric magnetite grains, locally in clusters or large centimetric crystals. Unlike white granitic pegmatite associated with metasedimentary sequences, unit Athe5 pegmatite does not contain garnet, muscovite or beryl, and tourmaline is very scarce. Unit Athe5 contains enclaves of all the other units of the Théodat Complex (foliated to gneissic tonalite, granodiorite, monzodiorite and diorite).

The Théodat Complex occupies a very large portion of the Eeyou Istchee James Bay Territory (sheets 32J, 32K, 32N and 32O). It extends for 220 km from east to west between the James Bay Road and the Troilus Mine, and for 50 to 85 km from north to south between the village of Nemiscau and the Frotet-Evans Belt. Outcrop distribution indicates that the Goulde Lake area (sheet 32O11) contains a 30 km N-S section along which all units of the Théodat Complex outcrop.

Tonalitic to dioritic gneiss units of the Théodat Complex are the extension of the Rodayer Pluton eastward. The latter is interpreted as an old bedrock established between 2830 ﻿Ma and 2816 Ma (Sawyer and Ben, 1992, 1993; Davis et al., 1994, 1995; Bandyayera and Daoudene, 2017). This old crust is intruded by several generations of mafic, intermediate and felsic intrusive rocks, which are cut by late-tectonic granodiorite or granite intrusions. Volcanic rocks of the Frotet-Evans Belt to the south and Lac des Montagnes Group to the north are younger than the Théodat Complex tonalitic basement. The contact between the latter and the Nemiscau Subprovince is delineated by a regional shear zone assigned to the Poste Albanel Shear Zone. Pegmatitic granite or granitic pegmatite intrusions, generally enriched in magnetite (2-10%), are observed on outcrops throughout the Théodat Complex. These intrusions are pinkish in altered surface and light pink in fresh exposure, and are usually magnetic and similar to granitic pegmatite masses assigned to unit Athe5. Porphyritic granodiorite (Athe3), quartz monzodiorite and porphyritic quartz monzonite (Athe3a) units are similar to those of the La Sicotière Suite mapped in the La Sicotière Lake area (sheet 32N08; Bandyayera and Daoudene, 2018). These units may be part of the same intrusive suite.