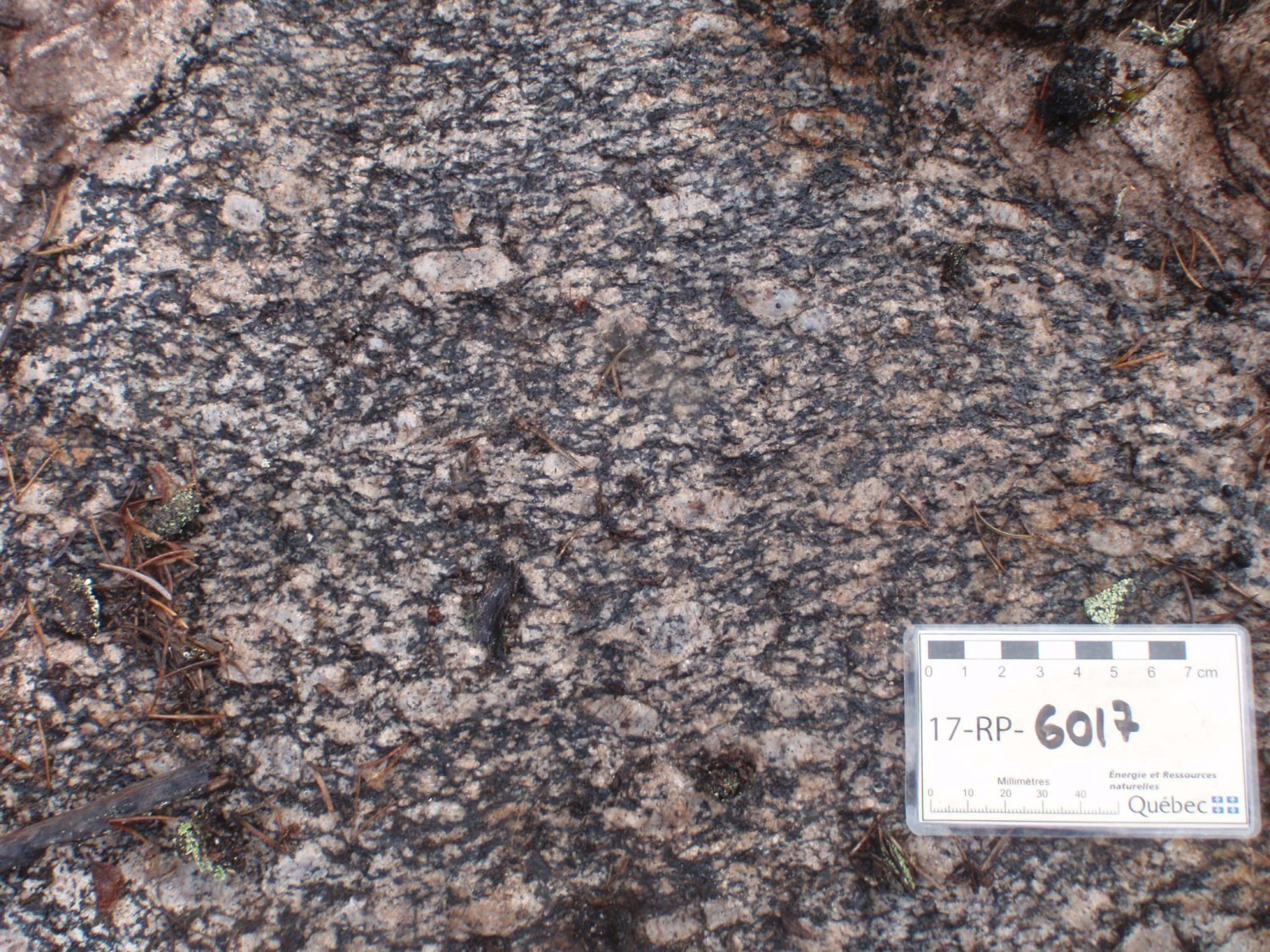 The La Sicotière Suite is a lithodeme introduced to describe a collection of porphyritic plutonic rocks, which vary in composition from granodiorite to monzodiorite and quartz monzonite (Bandyayera and Daoudene, 2018). This unit is located in the Nemiscau Subprovince south of the Rivière Rupert Shear Zone. 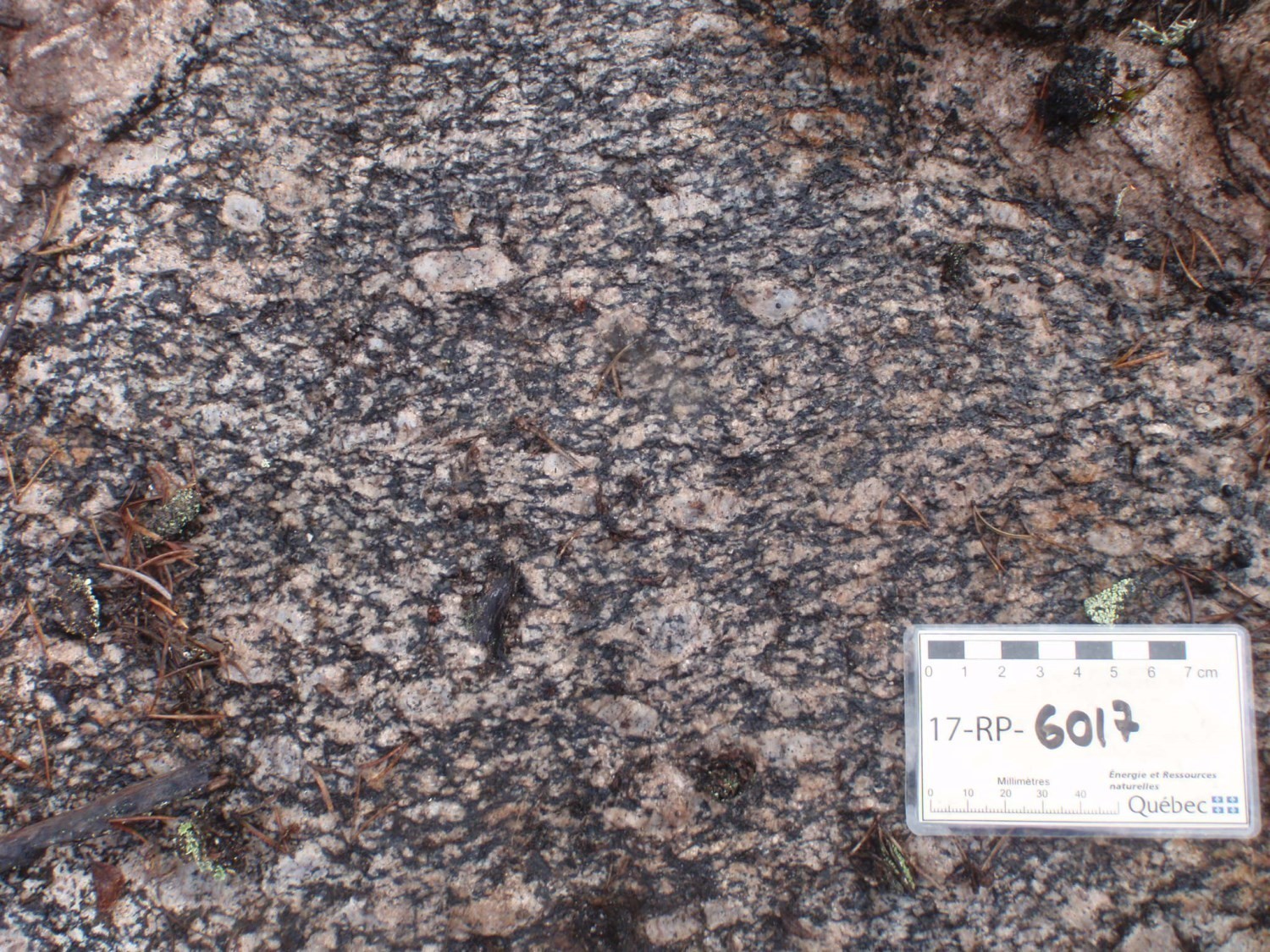 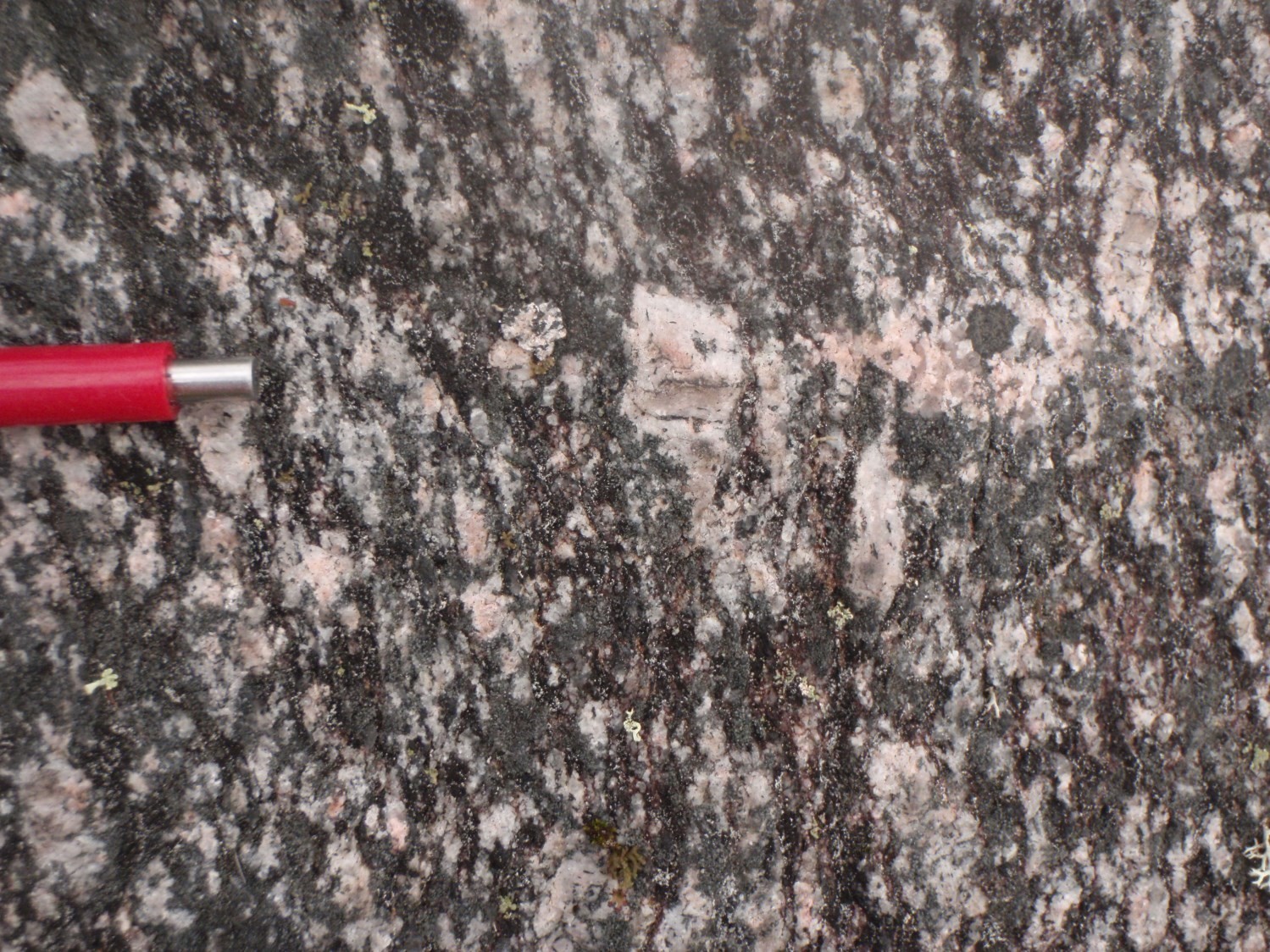 Unit nAscr1 is exposed south of the La Sicotière Lake region (sheet 32N08), in the middle of the diatexite unit of the Rupert Complex. It is associated with one of the region’s strongest magnetic anomalies, oriented SW-SSE, spread over 20 km in length and 3 km in width. Unit﻿ nAscr1 consists mainly of quartz monzodiorite and quartz monzonite, generally porphyritic, and locally porphyritic granodiorite. All of these rocks are medium to coarse-grained, weakly to strongly foliated, homogeneous and magnetic.

Their colour is pinkish grey to whitish rose in altered surface and light medium grey in fresh exposure. The pinkish colour is locally accentuated by strong hematization. All of these rocks are characterized by the presence of 5 to 30% centimetric phenocrystals or porphyroclasts of K-feldspar, locally euhedral to subhedral, more or less aligned with foliation planes. In the most deformed facies, asymmetrical tails and pressure shadows develop around K-feldspar porphyroclasts. Mafic minerals mark foliation and commonly form small elongated centimetric clusters of hornblende. The rock contains 10-20% hornblende (locally up to 40%), 5-25% biotite, and locally magnetite (2%) and pyroxene (2%). Accessory minerals are abundant and include sphene, epidote, muscovite, chlorite, allanite, apatite and opaque minerals. In places, some outcrops show porphyritic monzodiorite and granodiorite enclaves in pink granite, massive to weakly foliated, magnetic, medium to coarse-grained and locally pegmatitic.

Geochemically, these rocks are rich in potassium (1.5-4.3%), metaluminous, typically devoid of europium anomalies, and formed in an environment similar to volcanic arcs (Pearce et al., 1984). 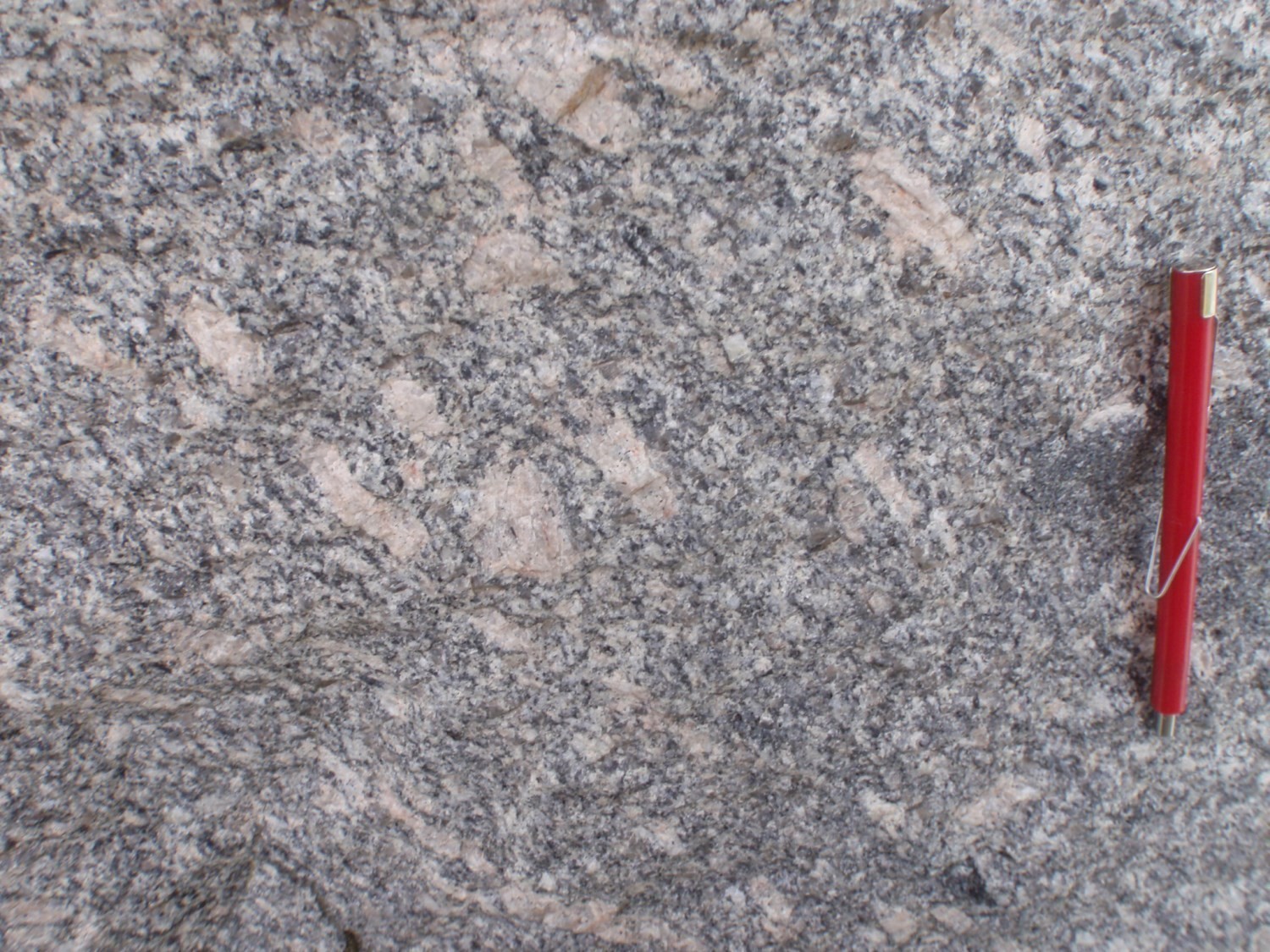 Unit nAscr2 is exposed east of the La Sicotière Lake region (sheet 32N08), between a diatexite unit of the Rupert Complex to the south and tonalitic gneiss and granitic intrusion units of the Champion Complex to the north. It extends to the NW-SE for 21 km long and 4.5 km wide along a magnetic anomaly whose susceptibility increases from NW to SE. This unit consists of foliated porphyritic granodiorite, medium to coarse-grained, homogeneous, slightly to moderately magnetic. The rock is whitish medium grey to pinkish grey in altered surface, whitish grey to pinkish grey in fresh exposure. Unit nAscr2 is characterized by a porphyritic texture defined by euhedral to subhedral K-feldspar phenocrystals 1 to 8 cm in length. The largest phenocrystals are poekilitic and contain mica inclusions. In places, they appear in the form of elongated, stretched and reoriented porphyroclasts parallel to foliation. In the least deformed areas, these phenocrystals may have a preferential alignment interpreted as magmatic foliation. The proportion of phenocrystals ranges from 10 to 25%, but averages around 10%. The rock generally contains 15 to 30% of mafic minerals consisting of hornblende (5-20%), biotite (2-30%), and magnetite (1-4%). The most deformed and foliated rocks contain more mafic minerals. Sphene, allanite and magnetite are the most common accessory minerals. UnitnAscr2 also contains metric to decametric enclaves of foliated medium-grained tonalite and diorite.

Geochemically, foliated granodiorite of the nAscr2 unit has several similarities with rocks of unit nAscr1 regarding trace elements, suggesting that they are cogenetic. They are moderately enriched with potassium (1.7-3.1%), metaluminous, typically devoid of europium anomalies, and formed in an environment similar to volcanic arcs (Pearce et al., 1984).

The La Sicotière Suite is composed of hectometric to kilometric intrusions that cut the Rupert Complex. New geophysical and geological data show that it extends NW-SE to NNW-SSE, at least 21 km long and 8 km wide.