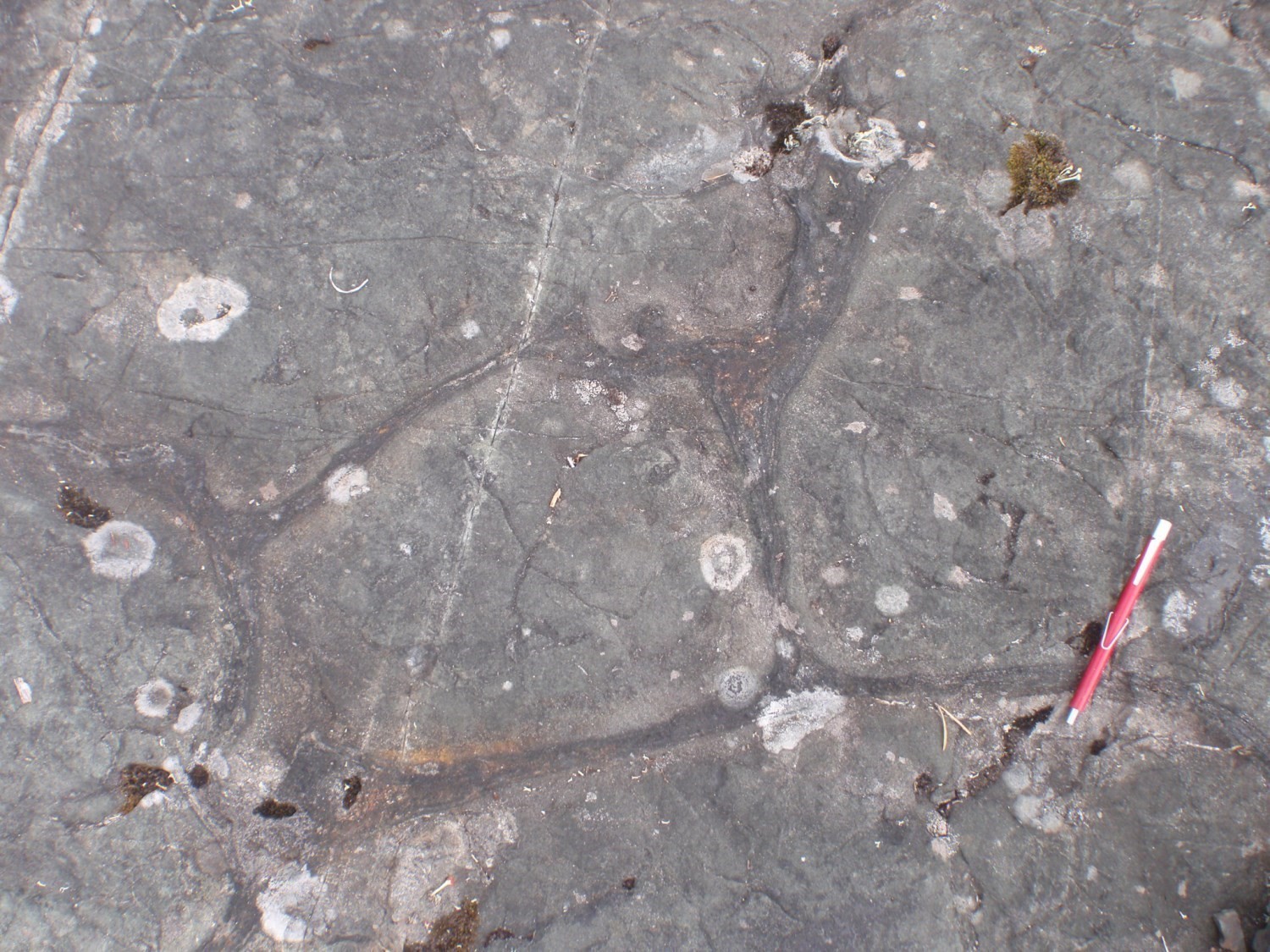 The Natel Formation consists of massive or pillowed flows of amphibolitized basalt, andesite, komatiite and rhyolite, as well as volcaniclastic units (block and lapilli tuff, lapilli tuff and tuff). The volcanic rocks of this formation are mainly of tholeiitic affinity (Moukhsil and Doucet, 1999). The Natel Formation was subdivided by Labbé and Grant (1998) into six units: 1) amphibolitized basalt, andesitic basalt and andesite (nAnt1); 2) mudstone and wacke (nAnt2); 3) komatiitic basalt and spinifex komatiite (nAnt3); 4) felsic to intermediate tuff (nAnt4); 5) basalt and andesite (nAnt5); and 6) rhyolite and felsic to intermediate tuff (nAnt6). Unit nAnt1 is located at the base of the Natel Formation and contains interstratified layers of units nAnt2, nAnt3 and nAnt4. Unit 5 probably forms a more differentiated layer in the volcanic sequence. Finally, unit nAnt6 forms the summital part. As described by Moukhsil (2000), unit nAnt4 consists of intermediate lapilli and block tuff; therefore, it was separated from the rest of the unit and now forms subunit nAnt4a. The rocks of the Natel Formation have been metamorphosed successively to the greenschist and upper amphibolite facies (Moukhsil and Doucet, 1999). The Natel Formation contains several occurrences of orogenic-type gold mineralization associated with quartz±tourmaline±carbonate veins and sulphide-rich walls (Moukhsil et al., 2003). 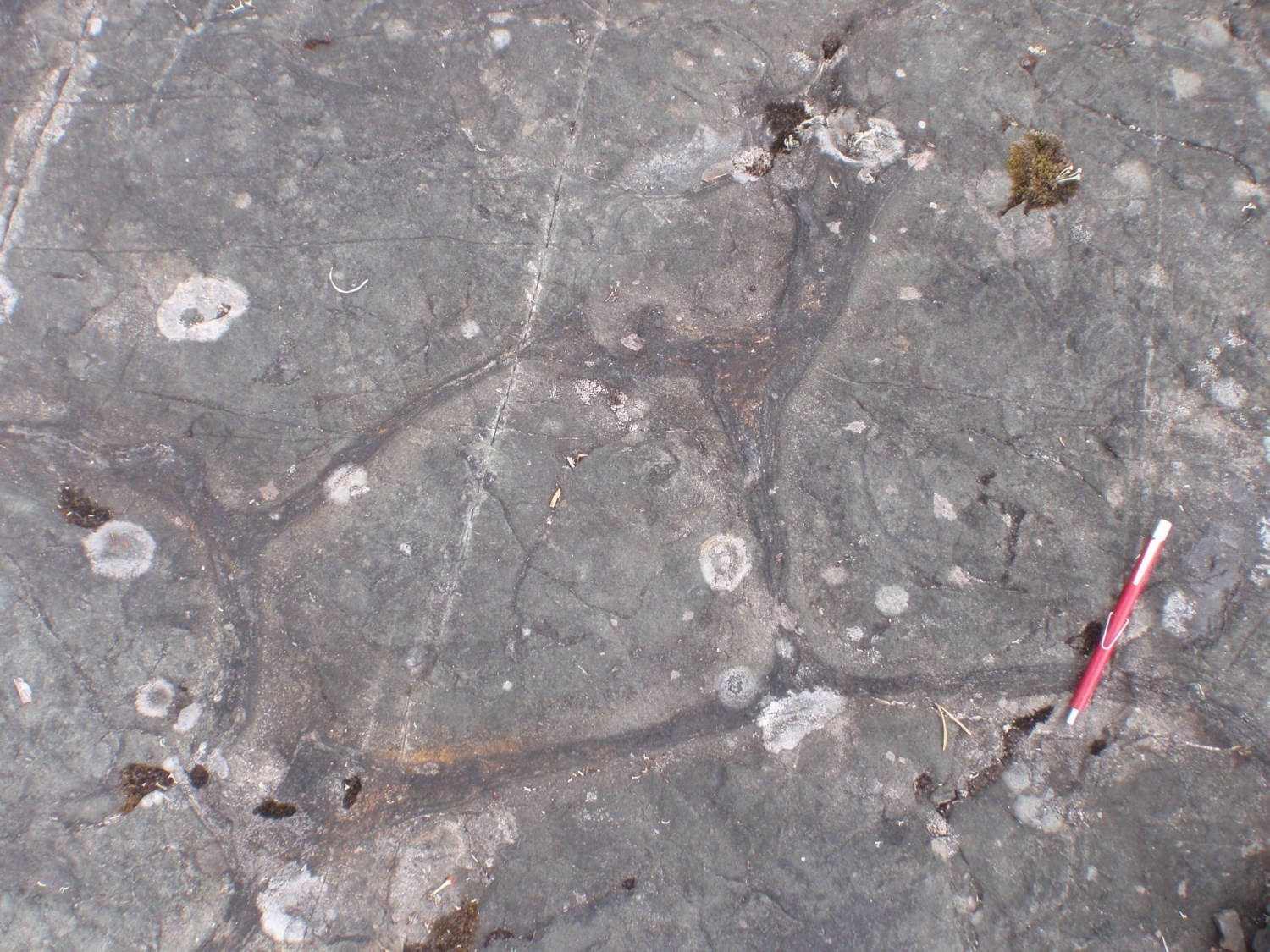 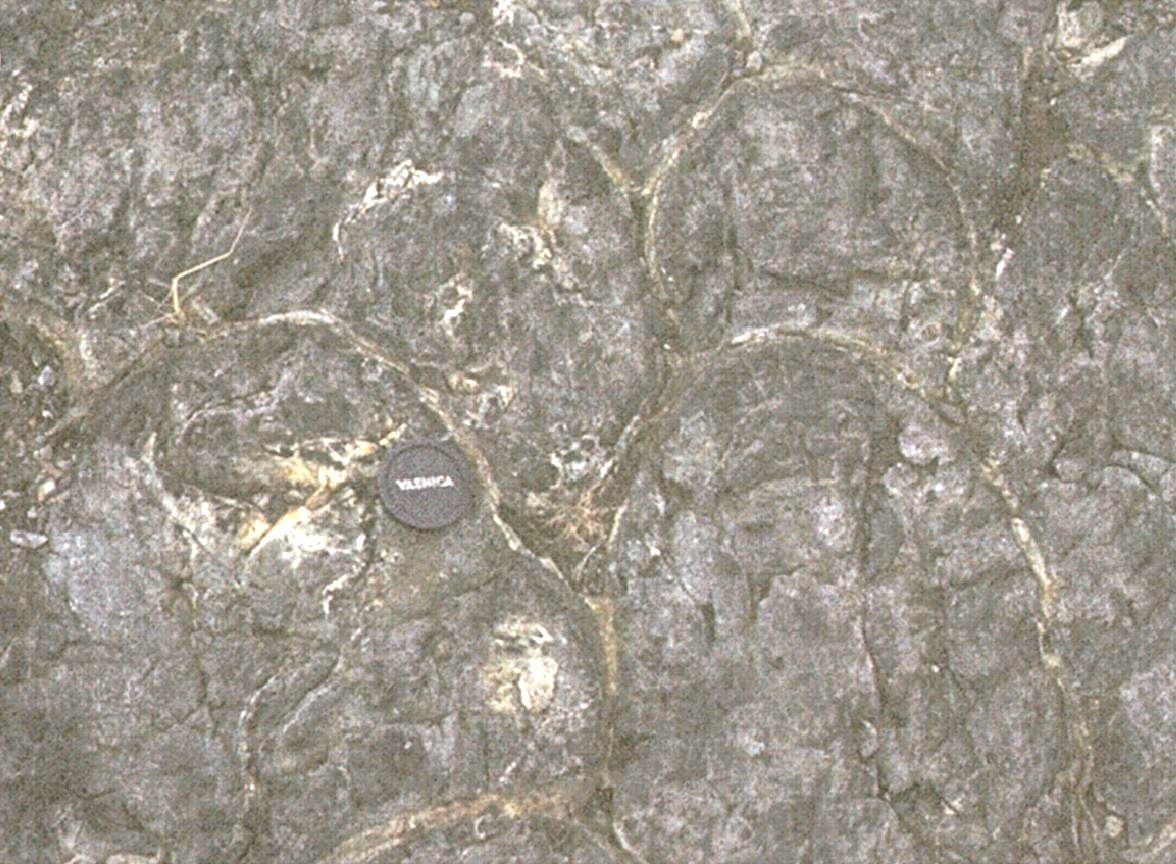 Unit nAnt1 forms the base of the Natel Formation. It consists of basalt, generally massive and locally pillowed, andesitic basalt and andesite, which are all amphibolitized (Labbé and Grant, 1998; Côté-Roberge et al., 2021). The rock is fine to medium grained, dark green on altered and fresh surfaces. It is schistose or banded in some places and has a very apparent lineation highlighted by hornblende (Valiquette, 1975; Franconi, 1983). Pillows are generally decimetric to metric and are partially deformed in some areas (Eakins et al., 1968; Valiquette, 1975). Locally, pillows are not preserved well enough to indicate polarity (Valiquette, 1975). Amygdules are well preserved at the base of some pillows, while others contain cavities that are open or filled with quartz and calcite (Valiquette, 1975).

In thin section, basalt is nematoblastic to granoblastic. Hornblende or acicular and poikilitic actinolite are the dominant minerals and make up 50 to 80% of the rock. Plagioclase (8-50%) is rarely twinned, slightly to strongly saussuritized or sericitized and recrystallized. Quartz (<15%) forms small straight-contact zones. Heavily chloritized biotite constitutes up to 5% of the rock (Côté-Roberge et al., 2021). Garnet can reach up to 5% of the rock locally (Moukhsil and Doucet, 1999). Accessory minerals are apatite, zircon, titanite, epidote, chlorite, sericite and opaque minerals. Epidote and opaque minerals can account for up to 7% of the rock (Moukhsil and Doucet, 1999).

Gabbroic sills are associated with the basalts. Gabbro, diorite and granodiorite intrusions are observed mainly at the edges of the intrusions (Labbé and Grant, 1998).

Unit nAnt1a refers to a series of narrow strips of banded amphibolite, of volcanic origin, exposed in the southern part of the Prosper Formation.

The effusive origin of the amphibolite is suggested by their rare earth element signature, which shows a low to zero gradient (Côté-Roberge et al., 2021). Strong recrystallization associated with metamorphism affects the amphibolite and no primary structure is preserved, unlike the rocks of unit nAnt1. The patina of the rock on an altered surface is dark green to black and the colour on a fresh surface is dark grey-green. The rock is foliated and commonly very well banded, fine to medium grained. The amphibolite is composed mainly of hornblende (50-70%) with additional biotite (1-10%) and plagioclase. The foliation is defined by the preferential orientation of small flattened hornblende clusters. Weak chlorite and carbonate alterations are observed.

Unit nAnt2 is interstratified with unit nAnt1. It occurs as lenticular layers﻿ of black mudstone and grey wacke, some of which are large enough to be mapped (Labbé and Grant, 1998). 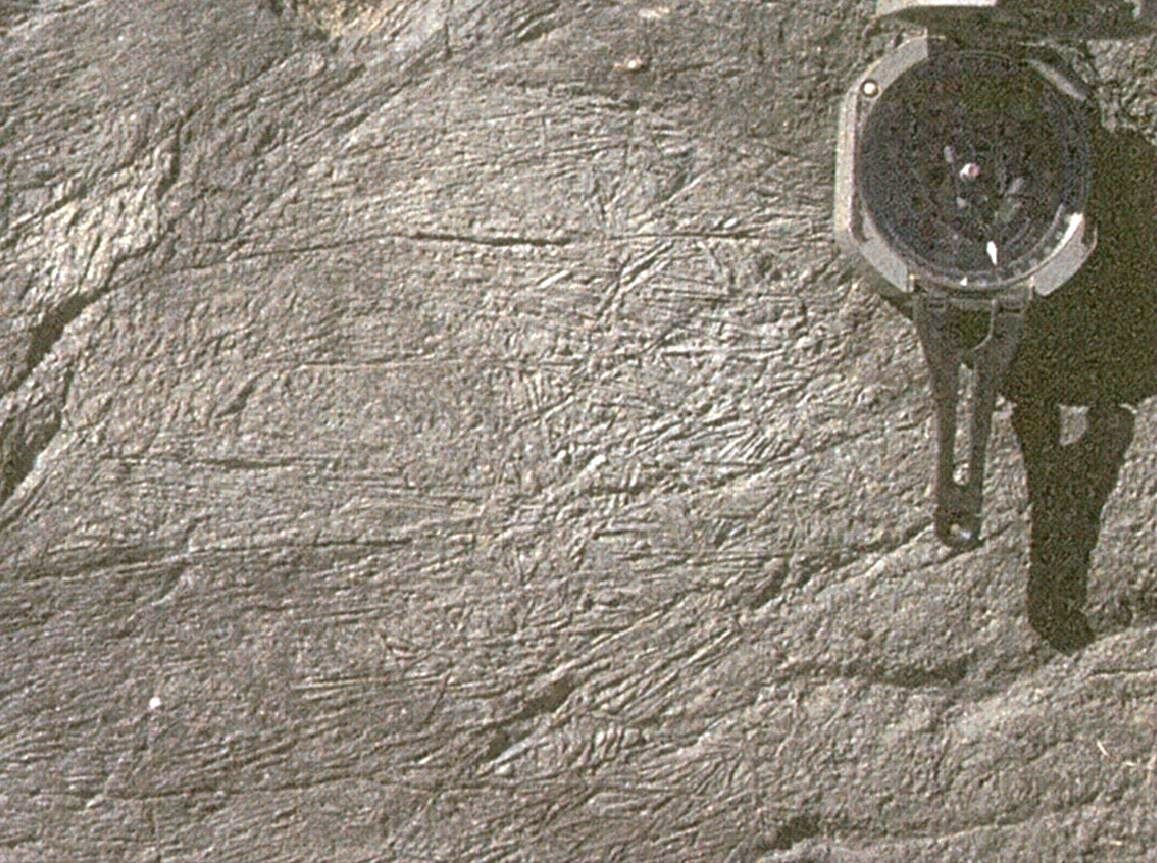 Unit nAnt3 is observed locally within unit nAnt1 (Moukhsil and Doucet, 1999). It consists of komatiitic basalt and komatiite. The latter are undeformed and display spinifex textures and brecciated layers (Labbé and Grant, 1998). The komatiitic lavas are highly altered. Their composition is similar to that of komatiites typical of the Abitibi Subprovince and of those observed in the Upper Eastmain Volcano-Sedimentary Band (sheet 33A) (Boily, 2000; Boily and Moukhsil, 2003; Moukhsil et al., 2003). In thin section, the rock is fine grained, even grained and has no foliation. Actinolite, the dominant mineral (45-94%), is anhedral to subhedral. Plagioclase (2%) is sparse. Other minerals include epidote (3%) and opaque minerals (1%), which form small subangular and disseminated grains (Moukhsil and Doucet, 1999).

According to Labbé and Grant (1998): “[…] the main unit consists of fine-grained tuff observed in the Fed Lake area and near Aupapiskach Lake. Tuff facies are fine grained, usually siliceous and finely laminated, and locally contain quartz crystals. Unit nAnt4 does not appear to be a marker bed; two layers are within unit nAnt1, while a third layer is associated with volcanic rocks of unit nAnt5.” Subunit nAnt4a consists of block and lapilli tuffs described further east by Moukhsil and Doucet (1999).

Unit nAnt5 consists of basalt and andesite with a few layers of felsic to intermediate tuff and gabbro. According to Labbé and Grant (1998), this unit probably represents a more differentiated layer of the Natel Formation volcanic sequence. The rocks mapped in the Aupapiskach Lake area (sheet 33B04) are generally schistose, so that primary structures are obliterated and it is difficult to differentiate between lithologies (Labbé and Grant, 1998). To the SE of the Village lakes (sheet 33B03), the unit consists of aphanitic and equigranular andesitic lava layers (Moukhsil and Doucet, 1999). The andesites have a tholeiitic affinity (magnesian tholeiites and ferrotholeiites; Boily and Moukhsil, 2003). These rocks are composed of subhedral actinolite (50%), polygonal quartz (25%), slightly to non-sericitized plagioclase (20%) and opaque minerals (5%). The rock has a foliation marked by the alignment of actinolite crystals (Moukhsil and Doucet, 1999).

Unit nAnt6 is the summital part of the Natel Formation. It consists mainly of rhyolite and felsic to intermediate tuffs as massive volcanic layers of variable thickness and extent (Moukhsil, 2000; Côté-Roberge et al., 2021). South of Aupapiskach Lake (sheet 33B04), it is represented by a thick and continuous layer of felsic ash and lapilli tuff within unit nAnt5. These tuffs are similar to those observed in unit nAnt5. In the Brendan Lake area (sheet 33B04), the unit consists of tuff and a massive and very siliceous rhyolite. This rhyolite forms a small hill ~3 km west of Brendan Lake (Labbé and Grant, 1998). The rhyolite and tuff are variably chloritized, sericitized and silicified (Moukhsil, 2000). East of Beryl Lake (33B02), thin layers of lapilli tuff and crystal tuff of dacitic composition are present within strips of unit nAnt1. These rocks are grey-beige, finely to very finely grained and well foliated, in places banded. They consist of 30-60% quartz, 30-60% feldspar and 5-25% biotite. Hornblende, muscovite, garnet, epidote and pyrite complete the composition of these rocks. They are slightly sericitized, locally epidotitized and chloritized (Côté-Roberge et al., 2021). In the same area, Franconi (1983) also describes thin layers of felsic tuff with light and dark grey centimetric fragments, stretched and flattened parallel to the schistosity, in a light-coloured, aphanitic and finely banded matrix.

Sparse outcrops of oxide facies iron formations are observed north of Brendan Lake. West of the same lake, there are also some thin wacke and conglomerate layers (Labbé and Grant, 1998). According to Eakins et al. (1968), the rhyolite layers are locally accompanied by graphitic schist as well as thin layers of garnet-bearing chlorite schist.

The Natel Formation is located mainly in the eastern part of the LERVB. Two major strips can be distinguished. The first strip runs along much of the south shore of the Eastmain River and has a lateral extent approaching 100 km on an ENE-WSW axis from SW of the Paix des Braves Reservoir (sheet 32N16) to south of Bauerman Lake (sheet 33B02). At this location, the maximum true thickness of the formation is 2 km (Franconi, 1983; Moukhsil and Doucet, 1999). In the vicinity of Lamothe Lake (sheet 32O14), this strip is oriented along a N-S axis and is affected by a series of antiforms and synforms. A second major strip is located on the north shore of the Eastmain River and extends more than 30 km NW of the Village lakes.

Klippes of unit nAnt1 were also mapped in the Champion Complex by Bandyayera and Caron-Côté (2019). They are usually kilometre long and hectometre thick. These klippes were assigned to the Natel Formation because of their lithological nature and their proximity to the Middle and Lower Eastmain Greenstone Belt (MLEGB).

Six amphibolite strips of unit nAnt1a have been mapped in the eastern part of sheet 33B02. They are a few metres thick and extend for 1 to 10 km on magnetic maps, where they are mostly associated with low magnetic values (D’Amours, 2011). They are all more or less oriented along an E-W axis.

Isotopic dating of a rhyolite sample from unit nAnt6 collected at outcrop 1997-JY-224 yielded an age of 2739 ±5 Ma (Moukhsil, 2000). This rhyolite crystallization age places the Natel Formation in the second volcanic cycle of the MLEGB, aged between 2739 and 2720 Ma (Moukhsil et al., 2003). According to Moukhsil (2000), the age of felsic volcanism in the Moyenne-Eastmain area (unit nAnt6 rhyolite) coincides with the end of the first volcanic cycle (2730-2740 Ma) recognized by Gauthier and Larocque (1998) in the La Grande River area.

The Natel Formation constitutes the base of the Eastmain Group in the Moyenne-Eastmain region (Moukhsil and Doucet, 1999; Boily, 2000; Moukhsil et al., 2003). In the Béryl and Village lakes area, it is conformably overlain by paragneiss of the Auclair Formation (Franconi, 1983; Moukhsil and Doucet, 1999). To the east, the Natel Formation underlies the paragneisses of the Prosper Formation (Côté-Roberge et al., 2021). Strips of unit nAnt1a are also intercalated with this metasedimentary formation in the eastern part of sheet 33B02. In places, the Natel Formation is cut by the Bauerman Intrusion and the Pacific Intrusive Suite.

To the west, although the contact between the Natel and Anaconda formations was not observed by Labbé and Grant (1998), these authors suggest that a conformable contact exists. Based on the work of Moukhsil and Doucet (1999), Boily (2000) suggested that the Anaconda Formation stratigraphically overlies the Natel Formation. In the Natel Lake area, the basalts of unit nAnt1 are in fault contact with the Clarkie Formation (Labbé and Grant, 1998). West of Clarkie Lake, the contact between the Natel and Clarkie formations was not observed. According to Labbé and Grant (1998), it is possible that the contact is faulted, but it is also possible that the Clarkie Formation unconformably overlies the Natel Formation. The relationship between these two formations is not clearly established in the Village lakes area (Moukhsil and Doucet, 1999).

Between the Montagnes and Arques lakes, nAnt1 klippes are hosted in the Champion Complex (Bandyayera and Caron-Côté, 2019). Numerous small syntectonic to late-tectonic masses of gabbro (Agdi1) and diorite (Agdi2) of the Moyenne Eastmain Gabbro and Diorite are observed in basalts of the Natel Formation (nAnt1; Moukhsil and Doucet 1999). Several syntectonic and late-tectonic intrusions cut the Natel Formation (Labbé and Grant, 1998; Moukhsil and Doucet, 1999).