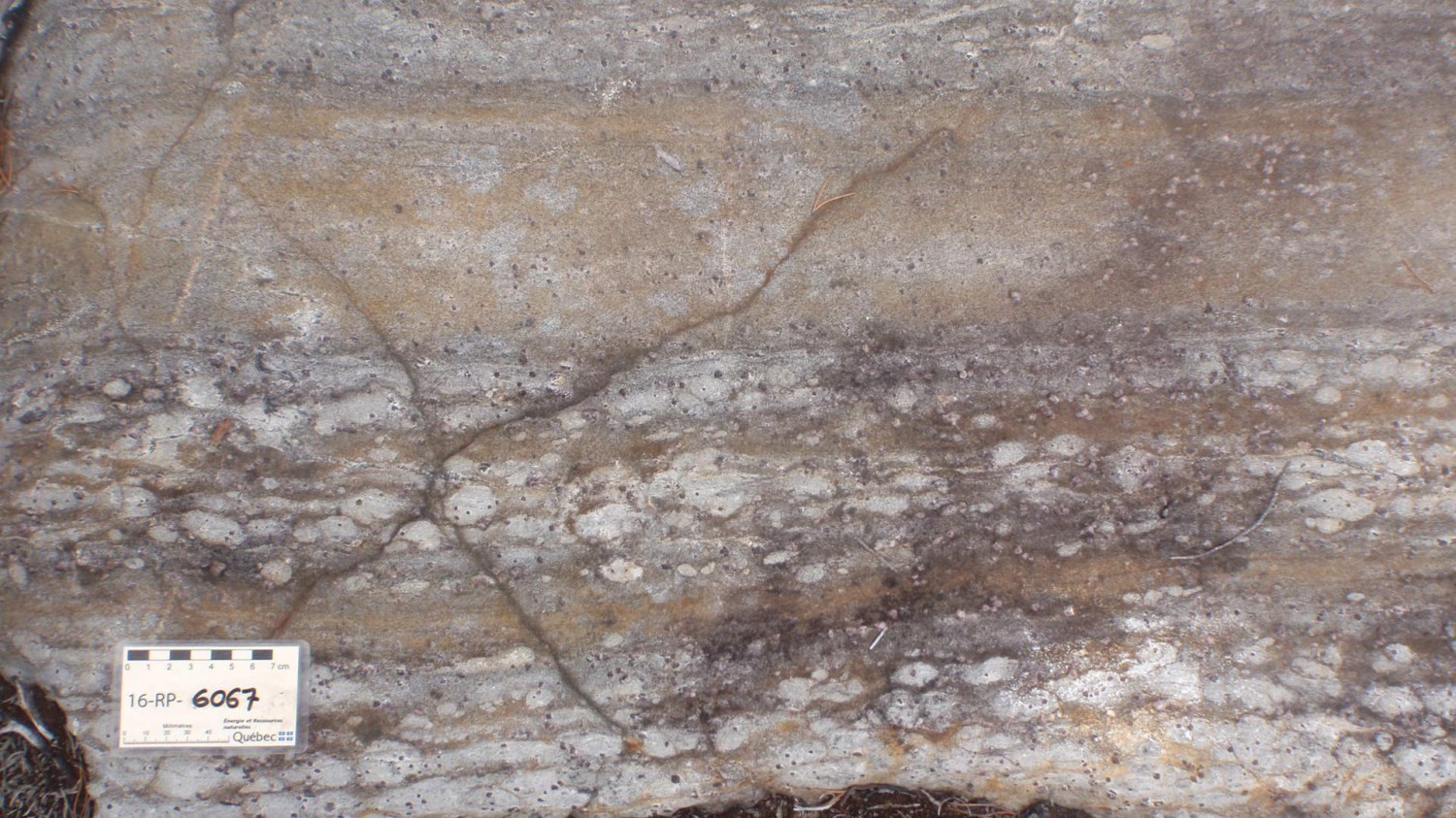 Volcano-sedimentary rocks of the Boisrobert region (NTS sheet 32N11) were all assigned to the Anatacau-Pivert Formation during compilation of the La Grande Subprovince in SIGÉOM, based on the work of Franconi (1978) and Moukhsil (2000). New geophysical data (D’Amours, 2011), as well as results of the 2016 geological survey (Bandyayera and Daoudene, in preparation), helped delimit and better define the sedimentary sequence of this area, formally referred to as the Pontax Formation.

The Pontax Formation is introduced to describe a sedimentary sequence of conglomerates and wackes located at contact between the Lower Eastmain River Volcanic Band (LERVB) to the north, the Champion Lake terrain to the south and west, both belonging to the La Grande Subprovince, and the Rupert Complex of the Nemiscau Subprovince to the est. The Pontax Formation unconformably lie on amphibolitized basalts of the Anatacau-Pivert Formation (unit nAnp1). Some of the Pontax Formation outcrops show quartz veins that cut basalt and end sharply in contact with sediments, which shows that they predate deposition of the sedimentary sequence. Sediment stratification is also oblique to bedding observed in basalts. The Pontax Formation was not included into the metasedimentary Nemiscau Subprovince due to its close association with the LERVB, preservation of primary structures and low-grade metamorphism. It consists of two units: 1) conglomerate with wacke horizons (nApnt1), and 2) wacke with conglomerate horizons (nApnt2). 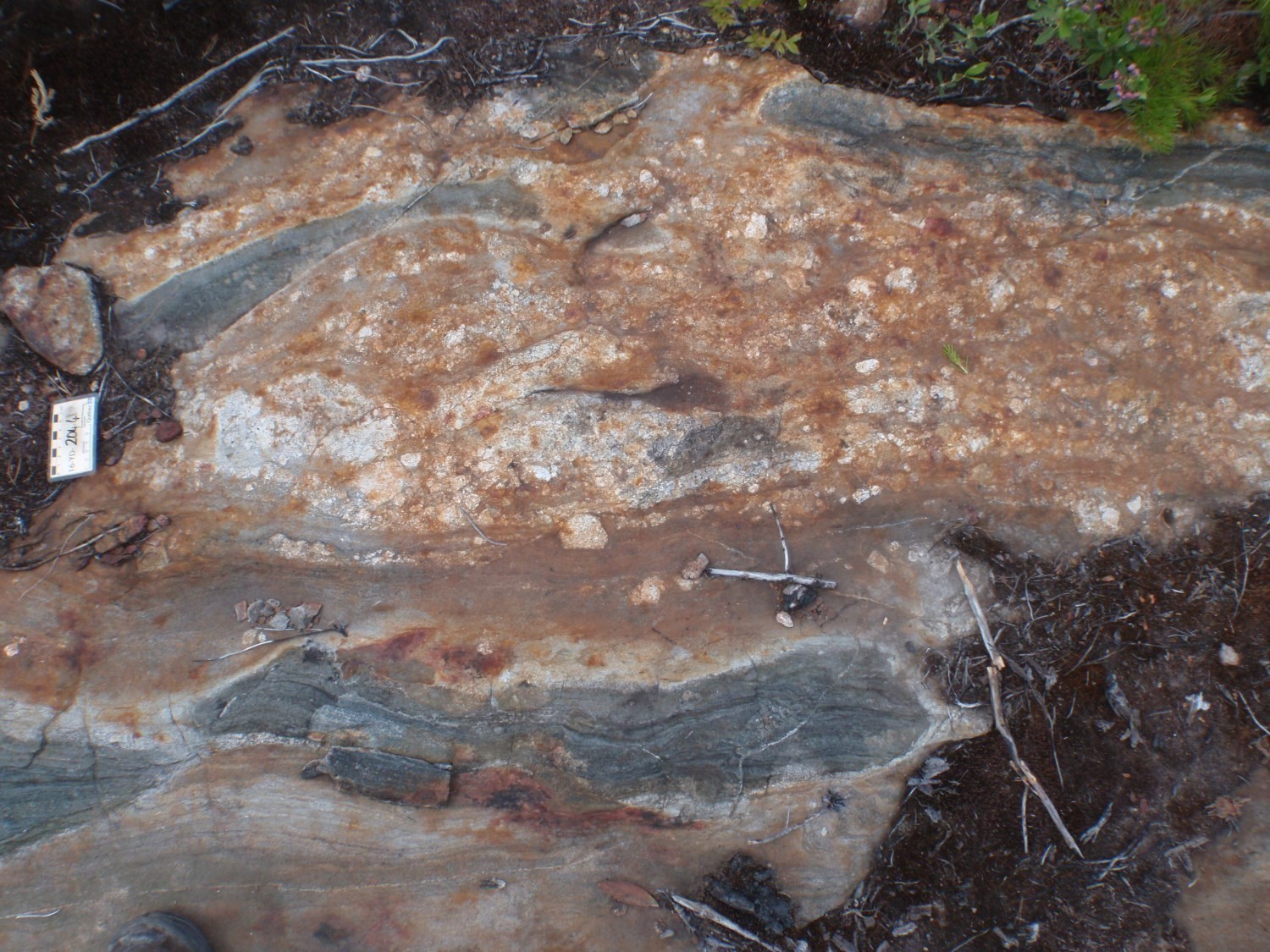 Unit nApnt1 consists of a package dominated by conglomerates locally associated with wacke horizons. Conglomerate is composed of subrounded, joint or floating monogenetic to polygenetic fragments. These centimetric to decimentric fragments make up up 80% of the rock. Their composition varies from felsic to intermediate (tonalite, granodiorite, diorite). Conglomerate also contains fine-grained mafic (5%) or felsic (10%) fragments that are likely derived from erosion of the underlying volcanic sequence. The matrix is medium grained, rich in biotite (30%) and contains up to 20% garnet. Garnet is present in both the matrix and fragments.

Polygenetic conglomerate contains bedded wacke horizons consisting of alternating centimetric to metric beds that are more or less rich in cordierite and garnet porphyroblasts. This alternation likely reflects variations in the primary composition of the protolith composed of sand beds and more aluminous clay beds. Locally, preferential elongation of porphyroblasts marks a mineral and stretch lineation. 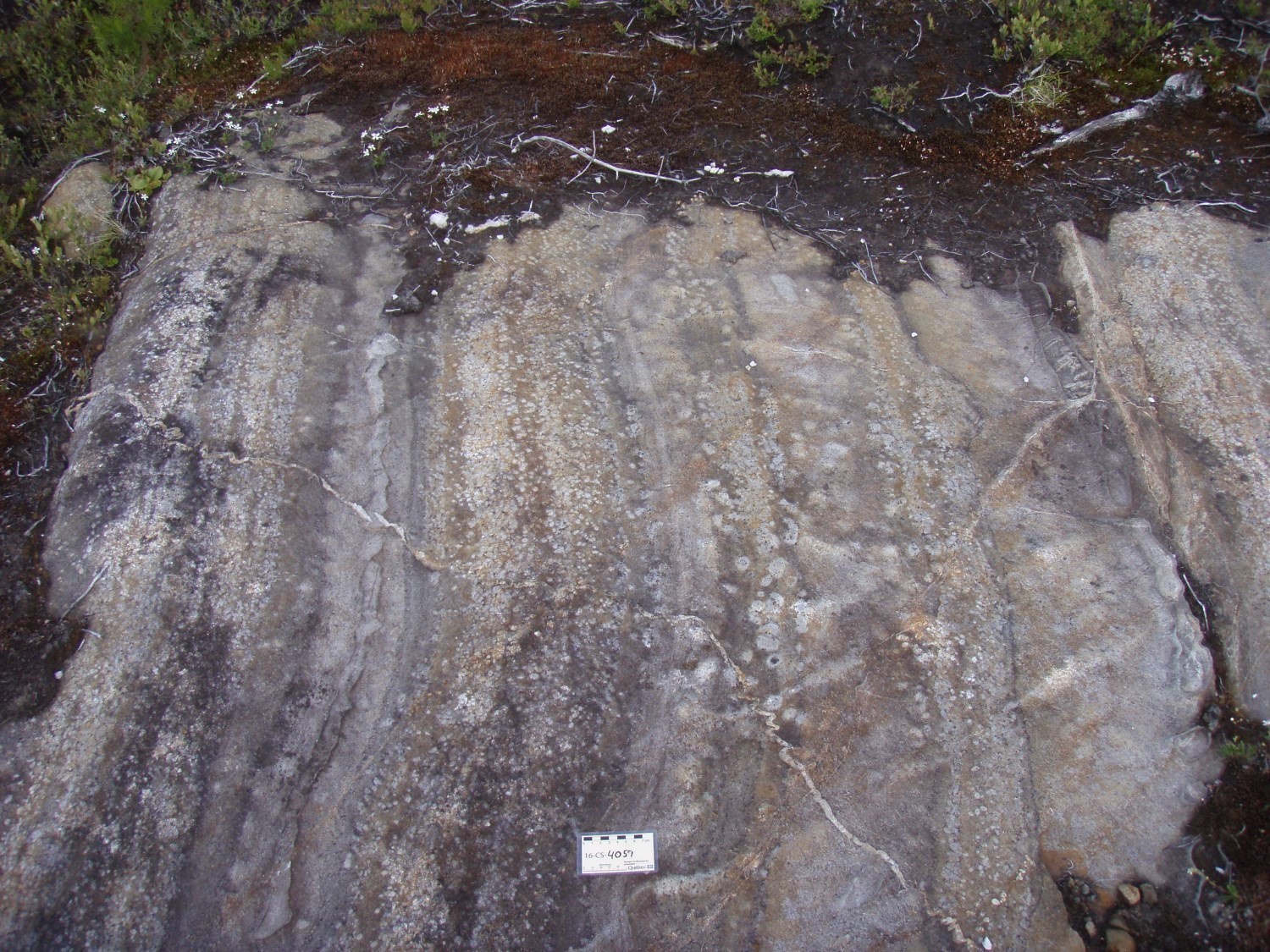 In the NW corner of the Boisrobert region (sheet 32N11), north of the Pontax River, there are several horizons of wacke and conglomeratic wacke interstratified with conglomerate beds. Conglomeratic wacke horizons have well-preserved primary bedding and reverse sorting indicating stratigraphic polarity of the sedimentary sequence to the SE. In this area, wacke horizons contain in several places metric horizons rich in cordierite (30%) and garnet (20%). These horizons are in contact with heavily altered zones characterized by many metasomatic zoned veins. 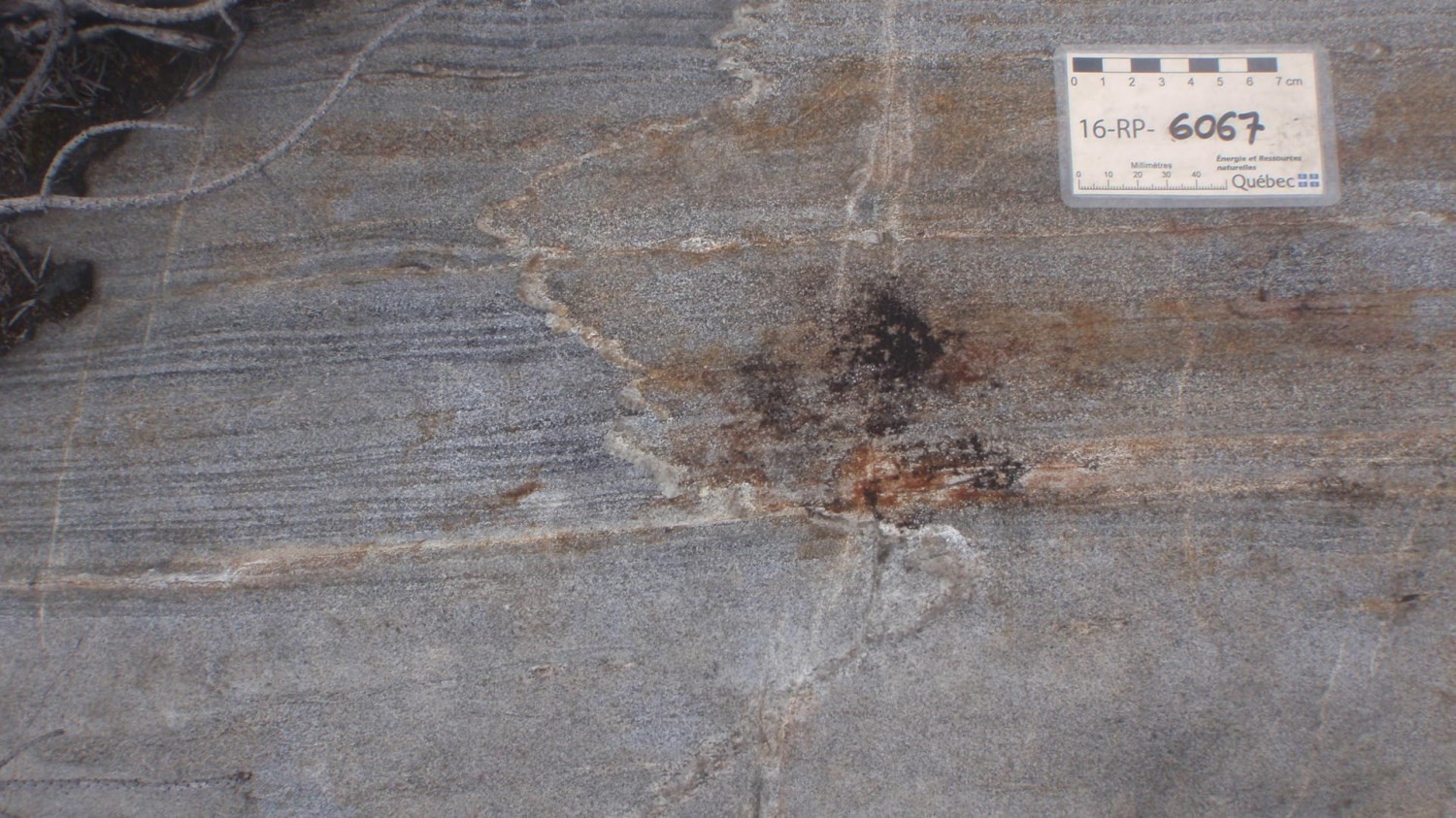 Unit nApnt2 contains, in places, decametric horizons of metasediments rich in cordierite (2-15%) and garnet (2-20%) poikiloblast and, more rarely, sillimanite (5-10%). The distribution of cordierite in some beds probably reflects variations in composition associated with bedding in the protolith, whereas garnet is everywhere. Cordierite grains are deformed, flattened and partially transformed to pinnite. Sillimanite occurs as prismatic rods or brown fibre clusters. Primary stratification is locally preserved in certain wacke horizons that have cross-bedding or parallel lamination.

The Pontax Formation outcrops NW of the Boisrobert Lake area (sheet 32N11); its E-W lateral extension is more than 20 km long and varies in thickness from 1 to 6 km.

The Pontax Formation unconformably lies on amphibolitized basalts of the Anatacau-Pivert Formation. It is cut by late intrusive phases of the Champion Complex.