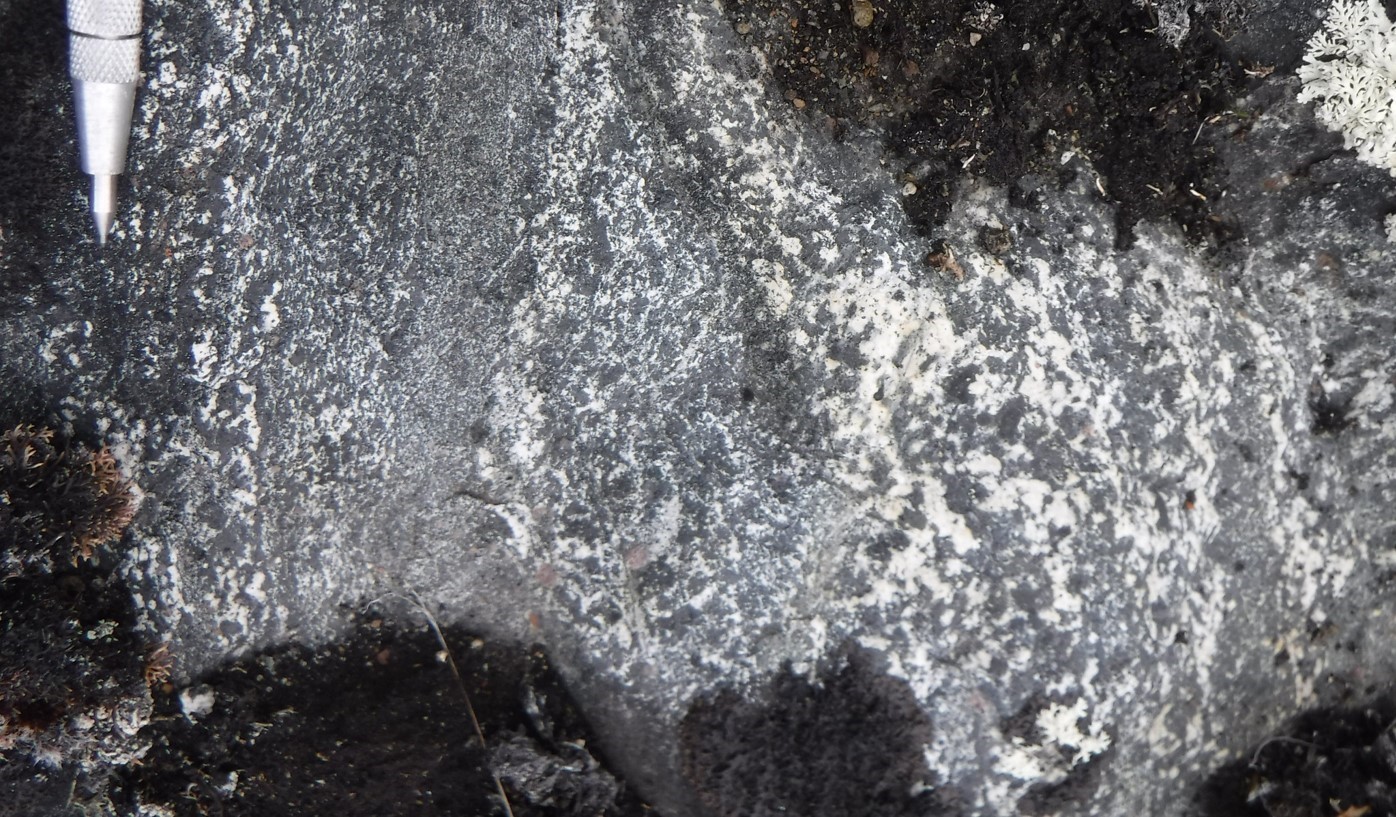 The Qikirtalialuk Suite groups several gabbro phases according to variations in composition and texture, which can be observed at the scale of a single outcrop in sharp, diffuse or interstrtified contact. The Qikirtalialuk Suite includes units pPqka1 and pPqka2, which are distinguished by their respective geochemical signatures. Rocks of unit pPqka1 have anomalous negative Nb-Ta-Zr-Hf contents, which are absent from unit pPqka2. In addition, unit pPqka2 is richer in heavy rare earths than unit pPqka1. 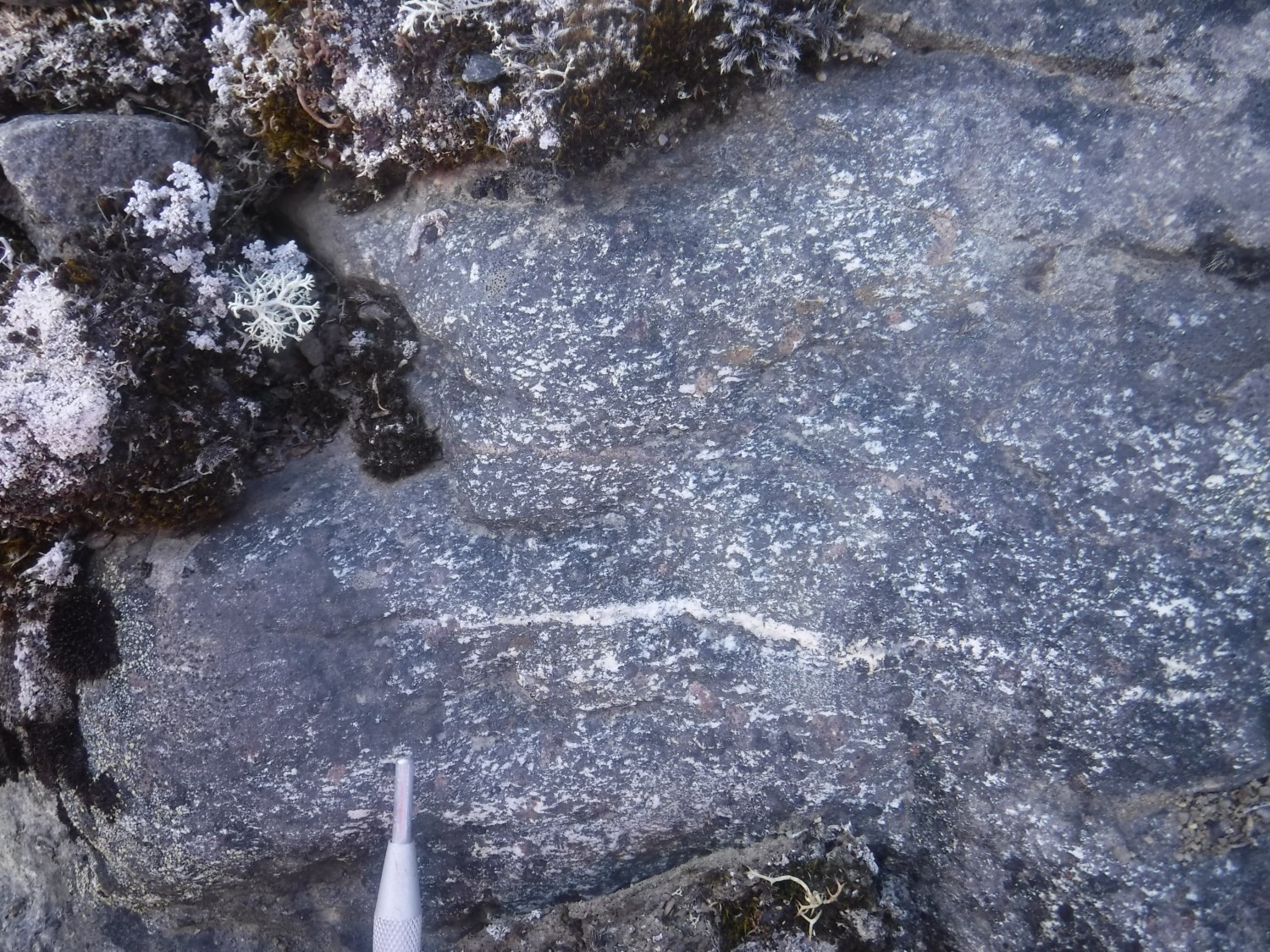 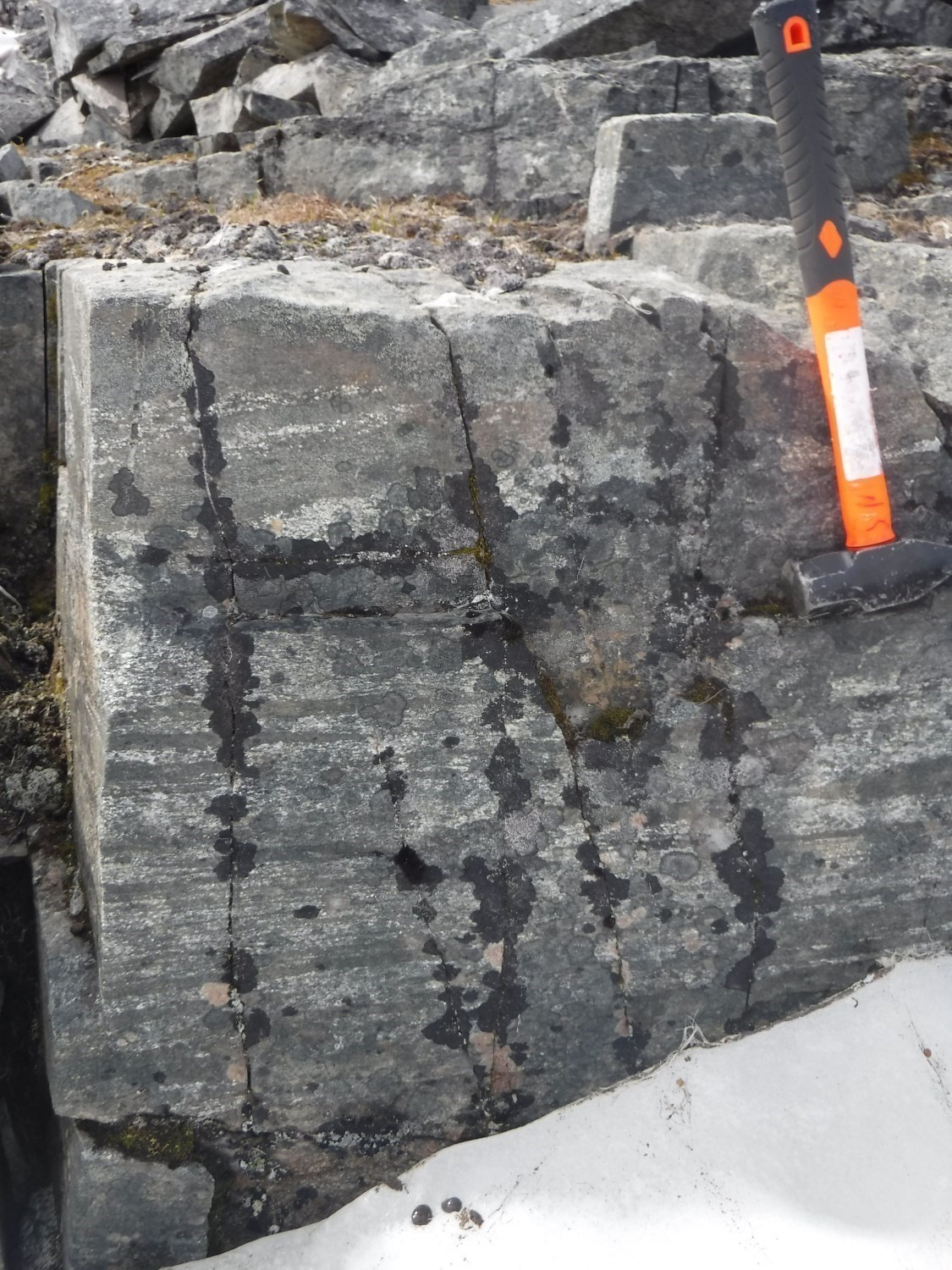 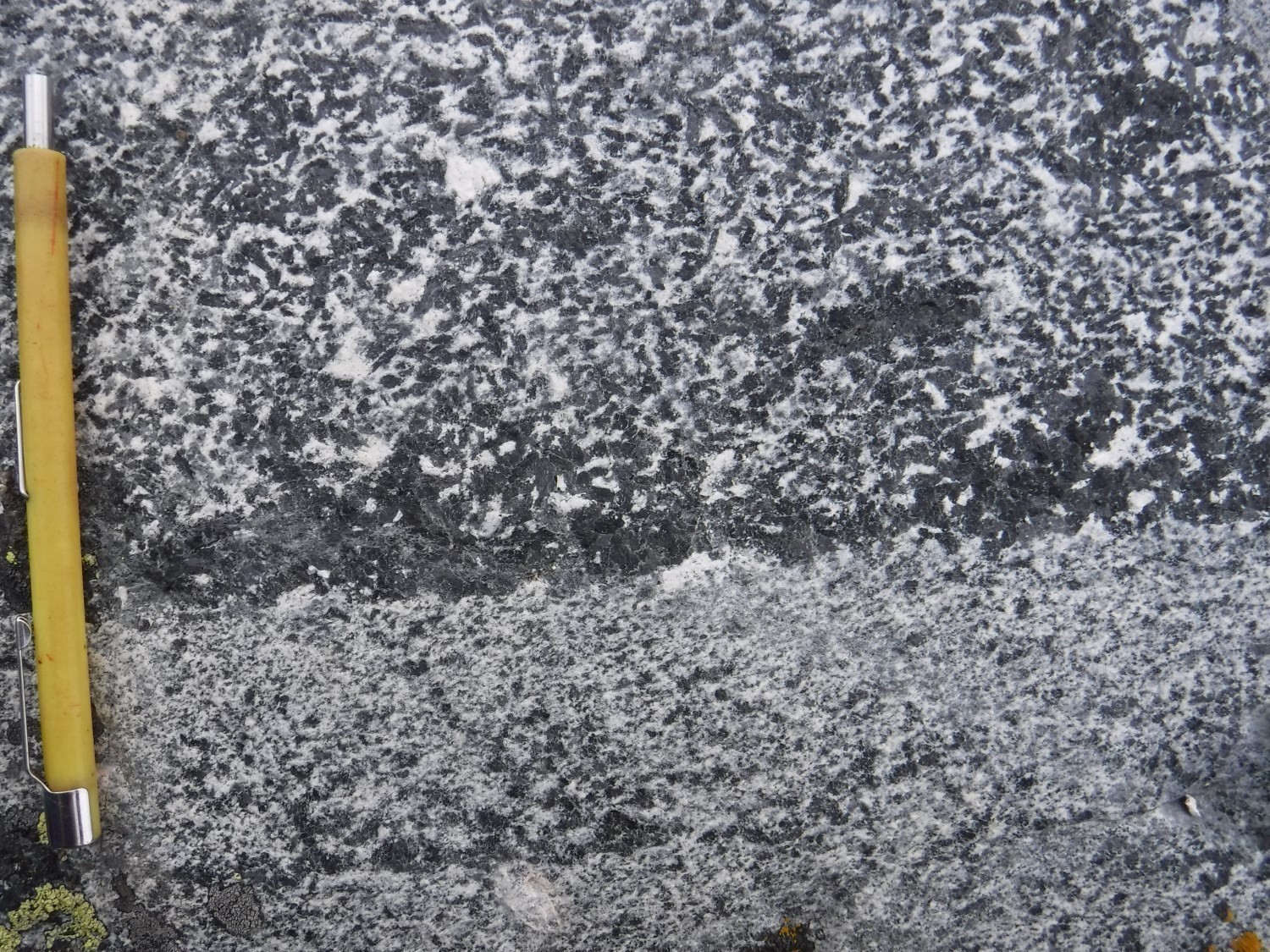 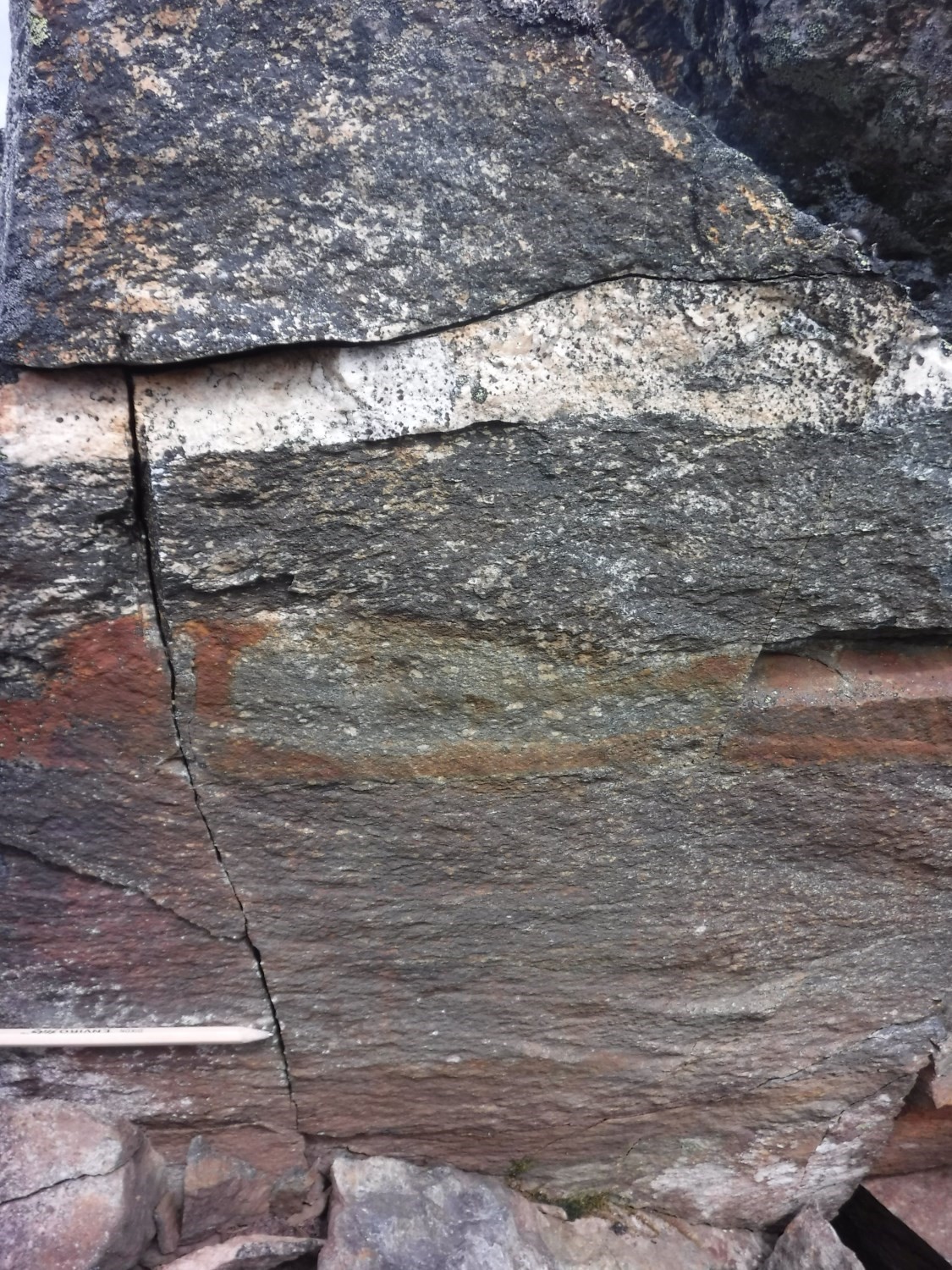 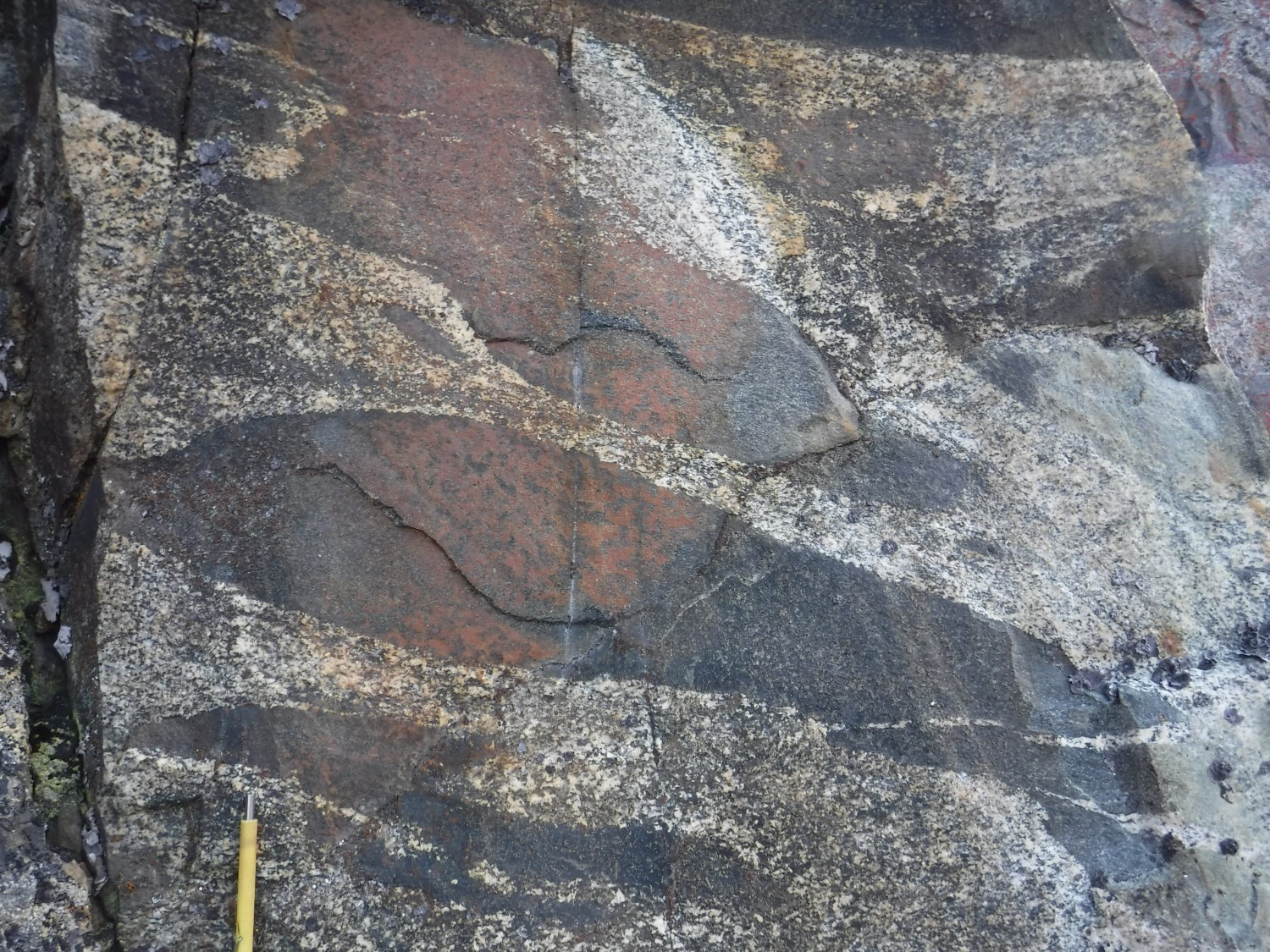 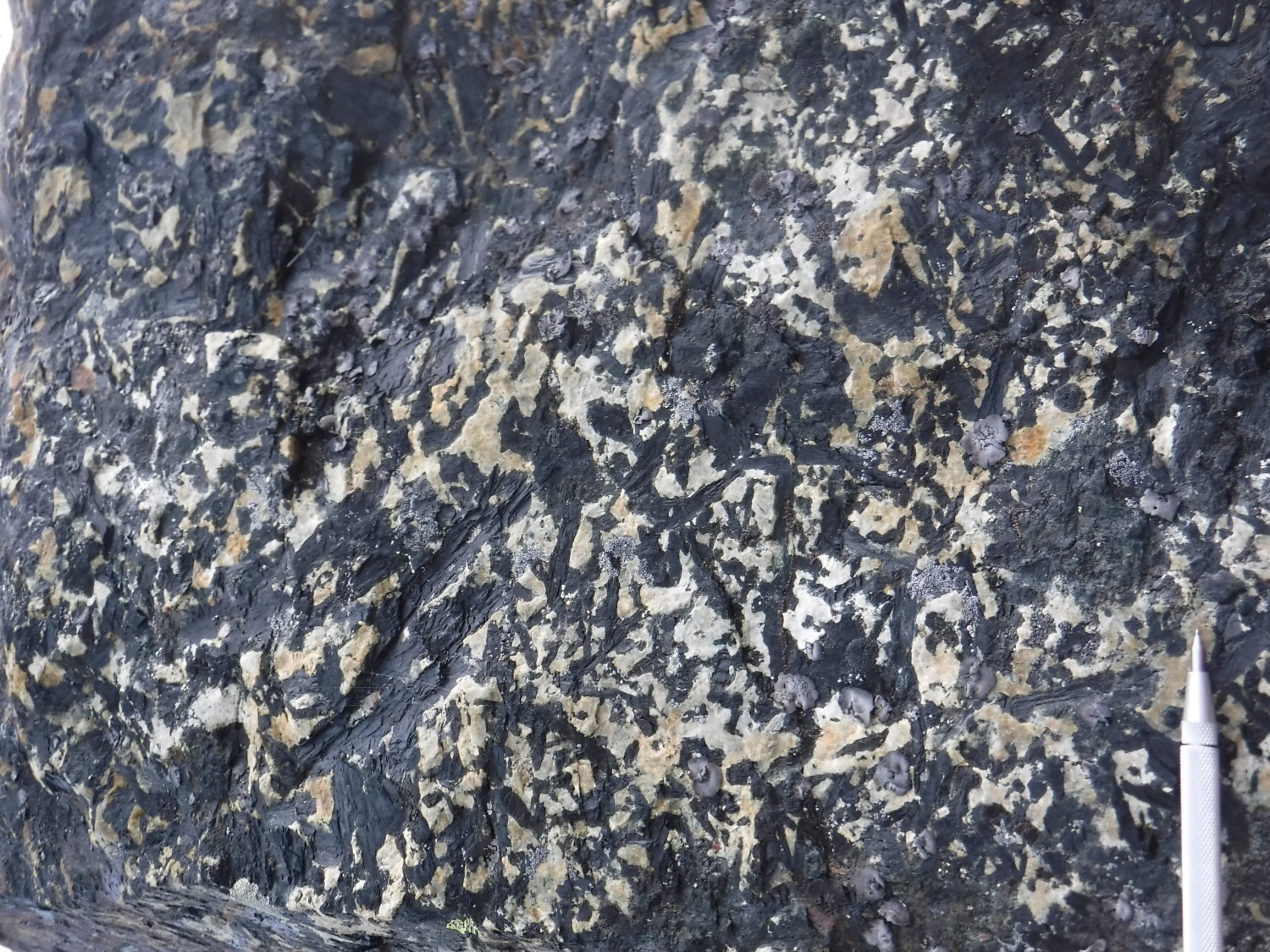 This unit consists of a heterogeneous package of different phases of leucocratic to melanocratic gabbro. The main phase is leucocratic to mesocratic, fine to medium grained, locally containing plagioclase phenocrystals or slightly speckled. This gabbro contains up to 50% enclaves of ultramafic rocks, fine-grained melanocratic gabbro and amphibolite. Gabbro typically is brownish in patina and grey in fresh exposure. Ultramafic layers and enclaves are black. All phases are non-magnetic.

According to crosscutting relationships observed on outcrops, the earliest facies consists of fine-grained recrystallized melanocratic gabbro. This phase is generally fairly homogeneous, even grained and may contain anhedral plagioclase phenocrystals having a milky appearance. This gabbro is cut by the most abundant lithology of the Qikirtalialuk Suite, medium-grained leucocratic to mesocratic gabbro that is relatively homogeneous and massive. This phase may contain centimetric layers containing plagioclase phenocrystals. Small elongated clusters of hornblende or plagioclase locally mark foliation. This gabbro can occur as deformed dykes without preferential orientation. On some outcrops, the melanocratic phase is present either as fragments resulting from in situ magmatic brecciation during the emplacement of fine- to medium-grained mesocratic gabbro, or in enclaves up to 50 cm long. Enclaves represent up to 50% of the outcrop and are mostly of ultramafic composition. The surrounding gabbro is more heterogeneous and coarser grained around the enclaves.

The Qikirtalialuk Suite differs from other gabbro units in the area by the presence of a banded phase, interpreted as magmatic layering. Bands are defined by stratiform variations, in sharp contact, in the content of ferromagnesian minerals. A second banded fine-grained phase in diffuse contact presents more pronounced compositional variations. These bands are generally laterally discontinuous. Layering is characterized by the transition from fine to medium-grained melanocratic gabbro to medium-grained mesocratic gabbro. There are a few rare minor ultramafic layers consisting of pyroxene orthocumulates possibly replaced by amphiboles.

Finally, unit pPqka1 includes to a lesser extent a very coarse to pegmatitic mesocratic gabbro phase. This phase is massive, generally heterogeneous, and ophitic to subophitic in the case of a homogeneous rock. At the scale of the sample, clinopyroxene is replaced by hornblende and supported by a matrix of subhedral plagioclase crystals as well as isolated garnet and bluish quartz crystals.

In thin section, gabbro contains variable amounts of ferromagnesium minerals and plagioclase depending on the phase. The majority of the samples observed are composed of slightly oriented hornblende prismatic crystals isolated in a fine matrix of plagioclase, quartz and small clusters of epidote and sericite. They are composed of 45-80% coarse, stocky and subhedral hornblende, generally forming rims around variably preserved clinopyroxene cores. Hornblende itself is locally replaced by entangled clusters of actinolite crystals and rims of very fine euhedral garnet. Hornblende generally contains small inclusions of quartz, epidote, opaque minerals, as well as chlorite and sphene in some samples. Coarser plagioclase is commonly replaced by an assemblage of epidote, sericite and what appears to be very fine equigranular quartz. Plagioclase is also recognized by their tabular habit and by light grey clusters of entangled laths. Garnet forms up to 3% subhedral porphyroblasts having a coronitic texture, as evidenced by the chlorite clusters around crystals. Additional accessory minerals are biotite, carbonates, apatite and zircon.

As mentioned above, this unit is individualized on the basis of its geochemistry. It consists of two different diorite and gabbro phases: the first having a fine to pegmatitic speckled texture and the second having a cumulate texture. The speckled and cumulate textures are characterized by hornblende clusters and euhedral clinopyroxene, respectively. In the pegmatitic phase, clinopyroxene can reach up to 10 cm in diameter. Phase variations are diffuse; locally, magmatic layering is described. Discontinuous layers of mesocratic to melanocratic amphibolitized material are in sharp contact with the fine-grained phase. In fresh exposure, the rock is dark grey and the alteration patina is typically brownish. The rock is composed of plagioclase, clinopyroxene, hornblende ± garnet. Garnet occurs mostly in enclaves or melanocratic phases. None of the phases is magnetic.

The largest intrusion of the Qikirtalialuk Suite is located in the NE part of the Parent Lake area (sheet 35G11). On map, it is 13 km along the NW-SE axis and 9 km along the NE-SW axis. The rooting depth of this intrusion is unknown. In the central part of this area, Qikirtalialuk Suite intrusions occur as tabular bodies interstratified with layers of Qaaneq Complex metasedimentary rocks and Foucault Suite metamorphic rocks. The attitude of these intrusions is consistent with regional foliation; they are interpreted as highly deformed intrusions. Unit pPqka2 is constrained to a single mappable entity in the largest intrusion of the unit, in the NE part of sheet 35G11.

The Qikirtalialuk Suite is interpreted as a polyphase intrusive suite. Outcrops generally contain several phases, some of which are in crosscutting relationships. The fine-grained melanocratic phase is cut by the medium-grained mesocratic phase and is locally found in enclaves in the latter. These two phases and all those described in this unit are intruded by the very coarse crystalline gabbro phase. The relationship between units pPqka1 and pPqka2 is undetermined. 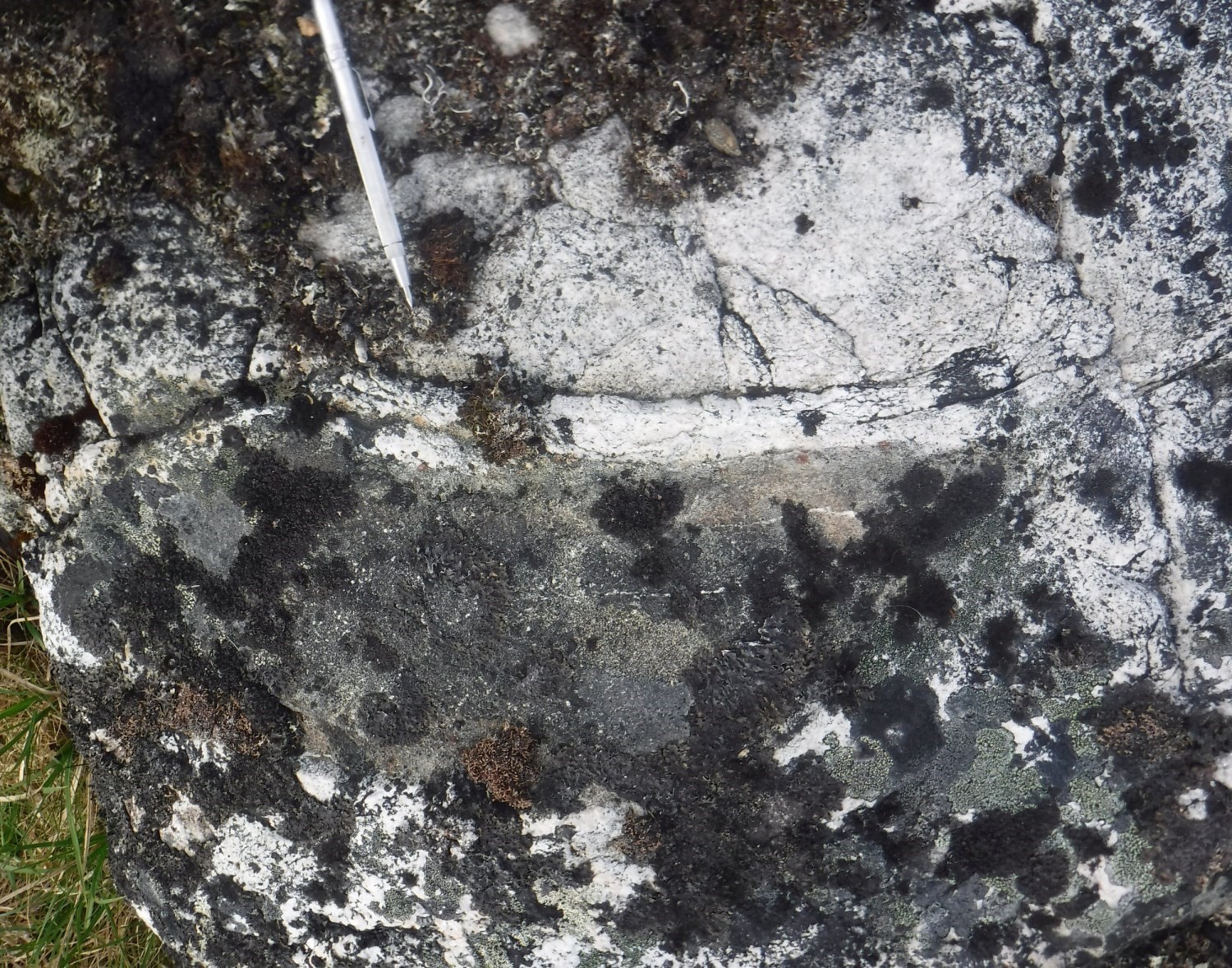 The Qikirtalialuk Suite cuts unit pPpa10 of the Parent Group in the NE part of the Parent Lake area (sheet 35G11). The contact is not observed in the field, but is interpreted as intrusive in nature. No significant deformation was noted on outcrops in the contact zone. The main intrusion of the unit is located in the NE part of the area. On outcrop 19-CB-1028, it is cut by the Qikirtaliapik Granite. Its chronology relative to metasedimentary rocks of the Qaaneq Complex is uncertain. Several contacts between these two units are faulted. The unit is cut by the Niviugak, Vanasse, Foucault, Iqiat and possibly Sirluaq suites.