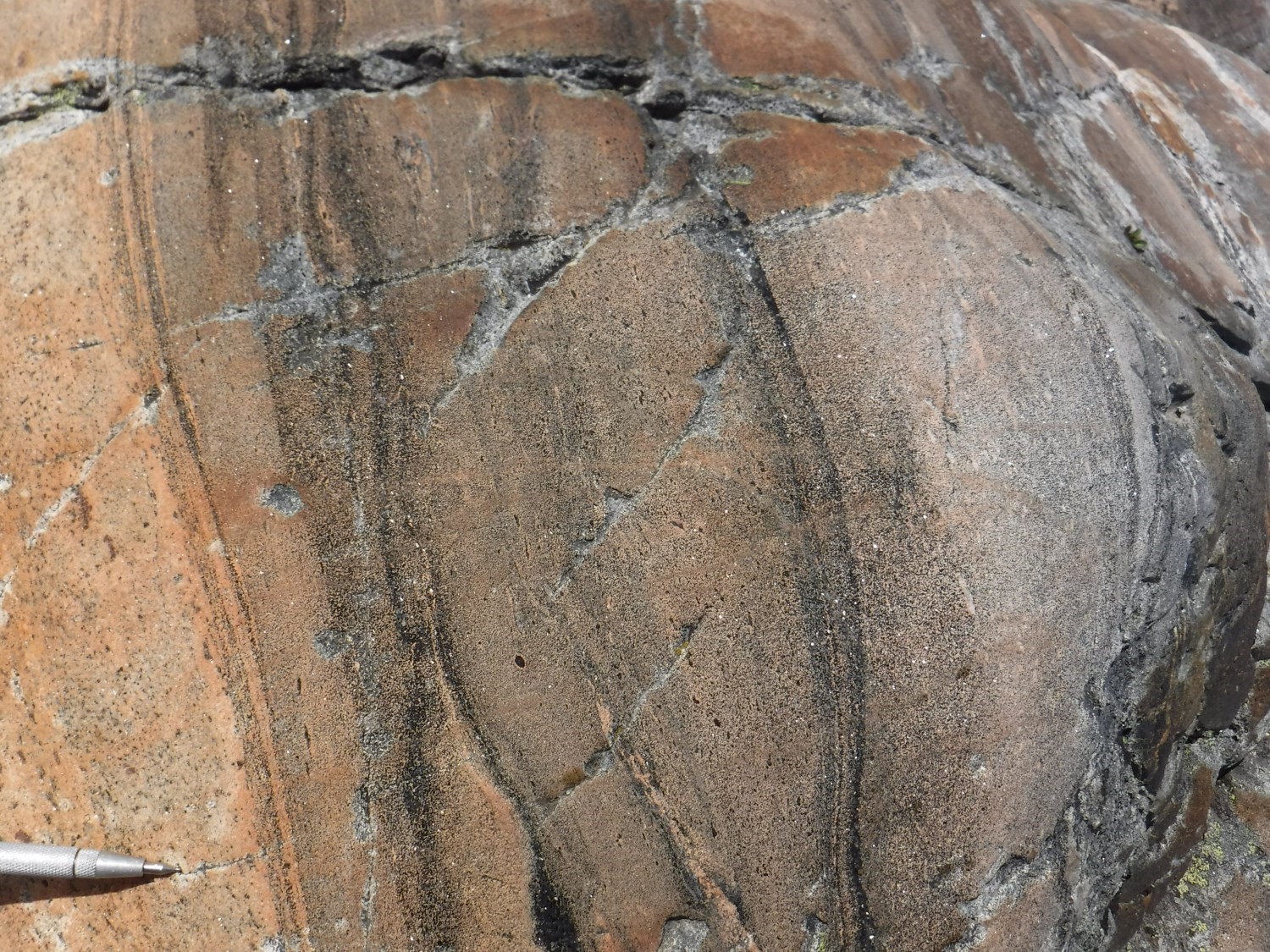 The Foucault Suite was introduced by Beaudette et al. (2020) to group more metamorphosed mafic and intermediate rocks located at the roof of the Ammaluttuq Fault (NTS sheet 35G11). These rocks were previously assigned to the Watts Group (Lamothe, 2007). The name of the suite comes from the Foucault River.

This unit is divided into two informal units: unit pPfoc1 consists of banded garnet porhyroblastic diorite and gabbro, and unit pPfoc2 consists of hornblende porphyritic amphibolite. Apart from their petrographic differences, these two units have comparable geochemical signatures. Their respective spider diagrams have similar slopes as well as negative anomalies in Nb, Ta, Zr, Hf and Ti. Their affinity is also the same, i.e.that of island arc basalts. 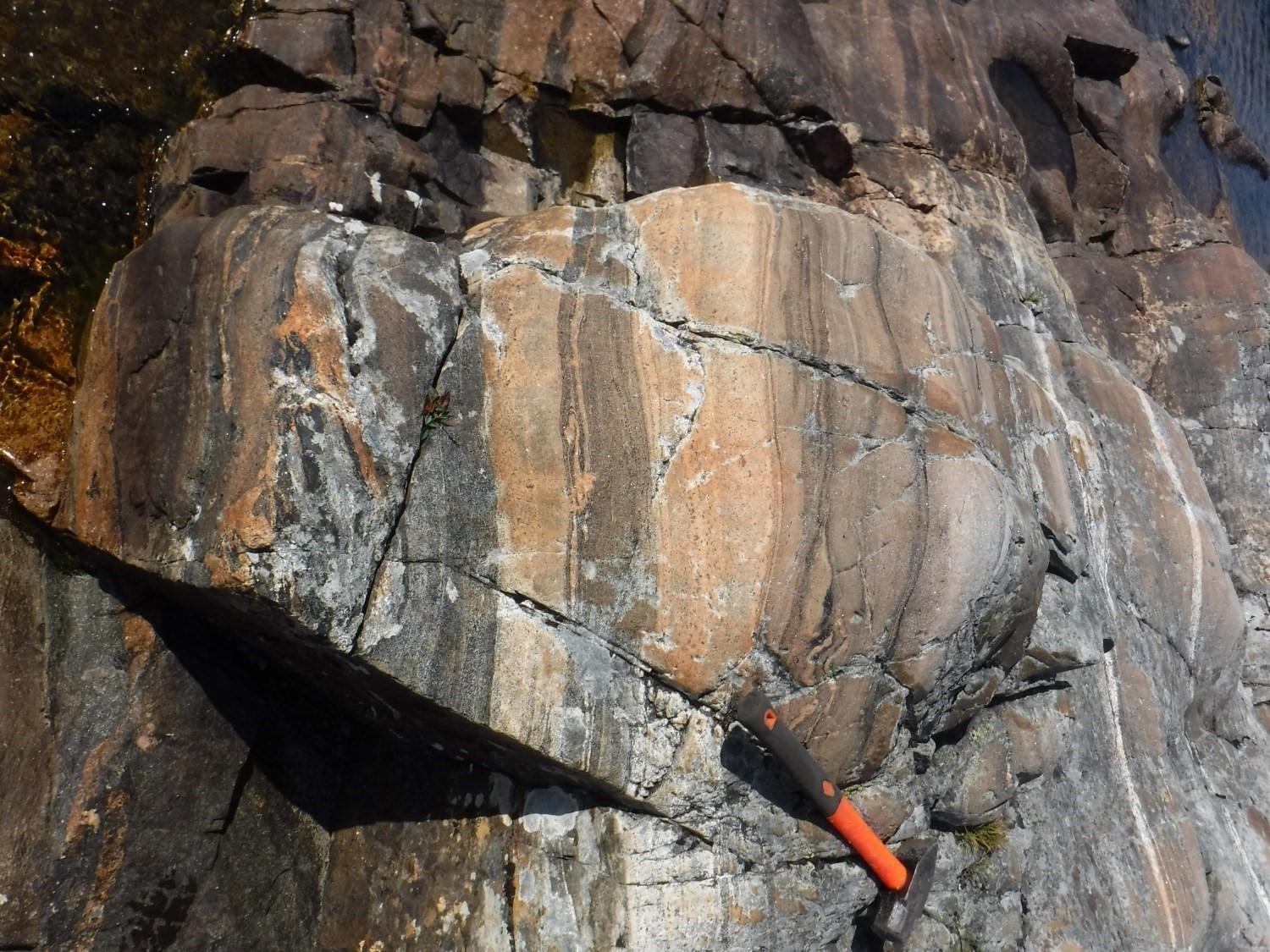 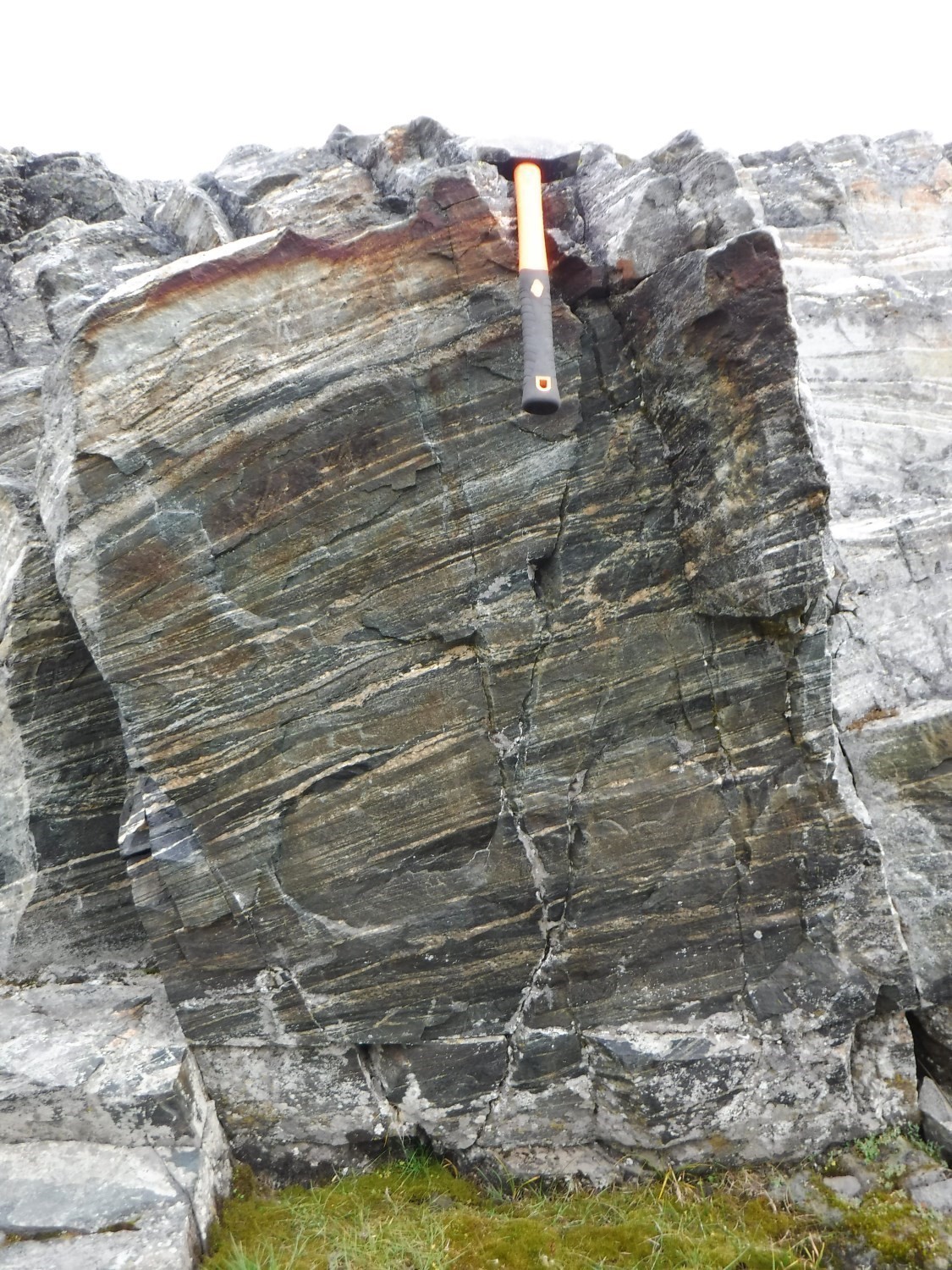 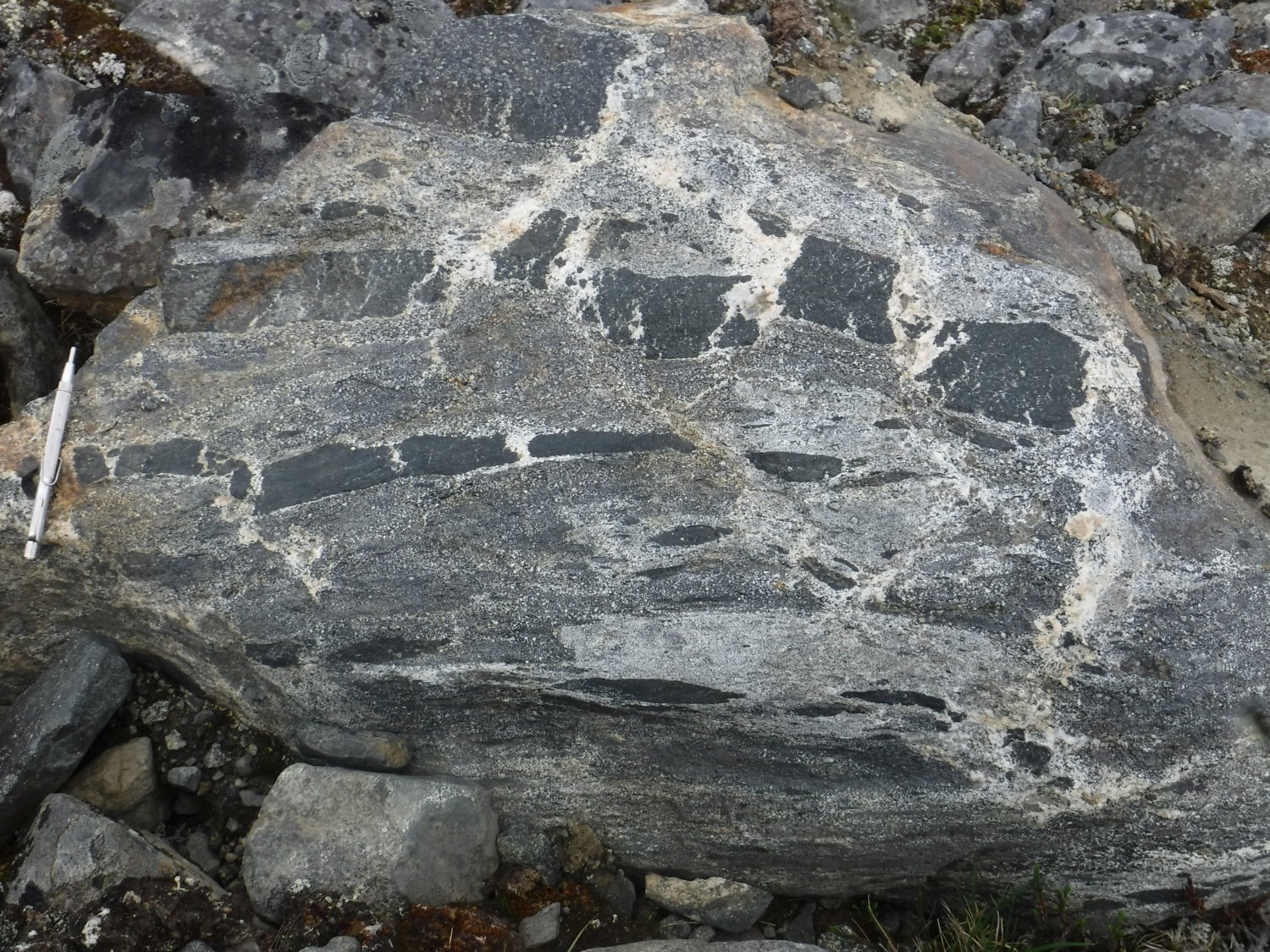 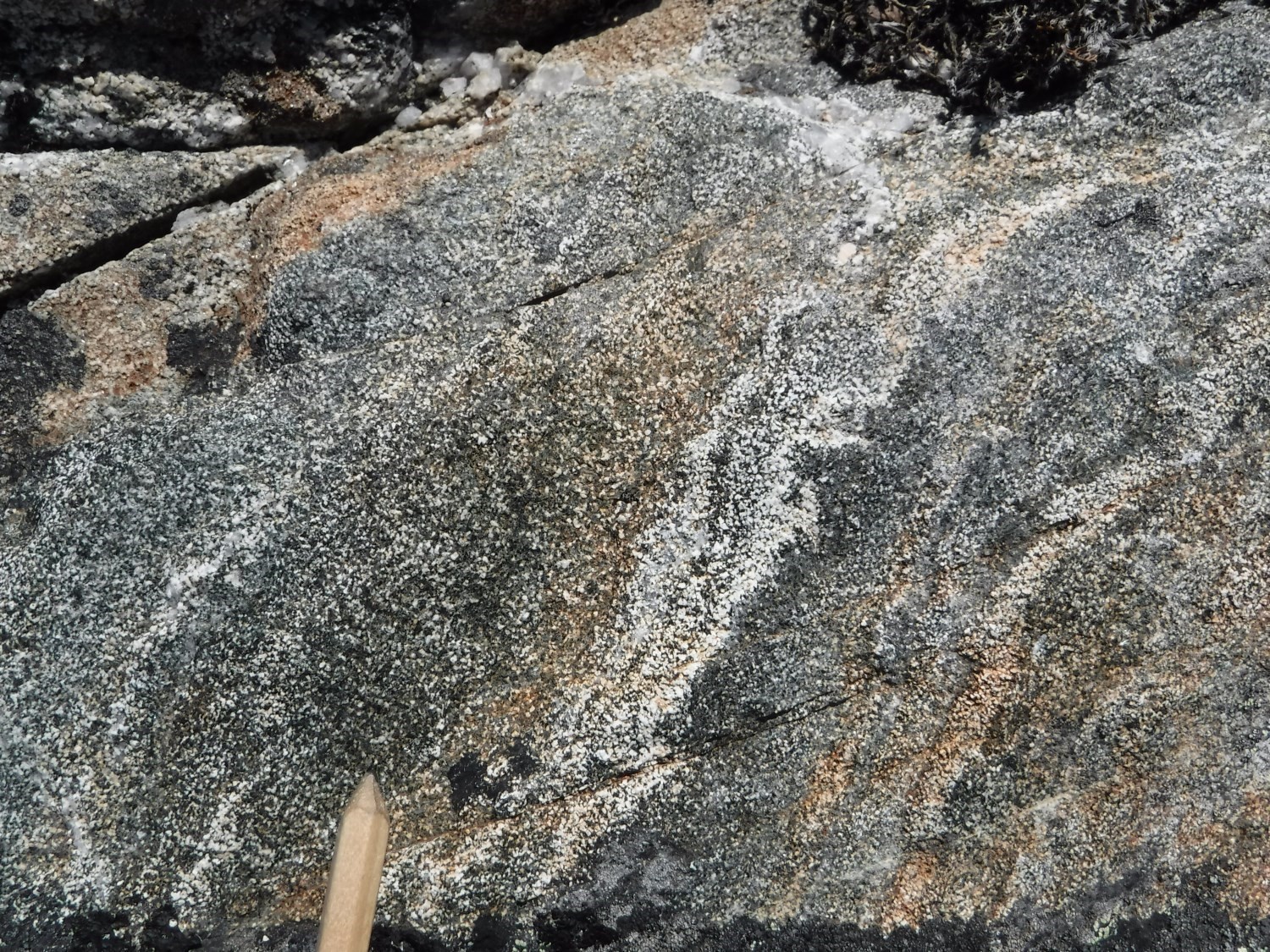 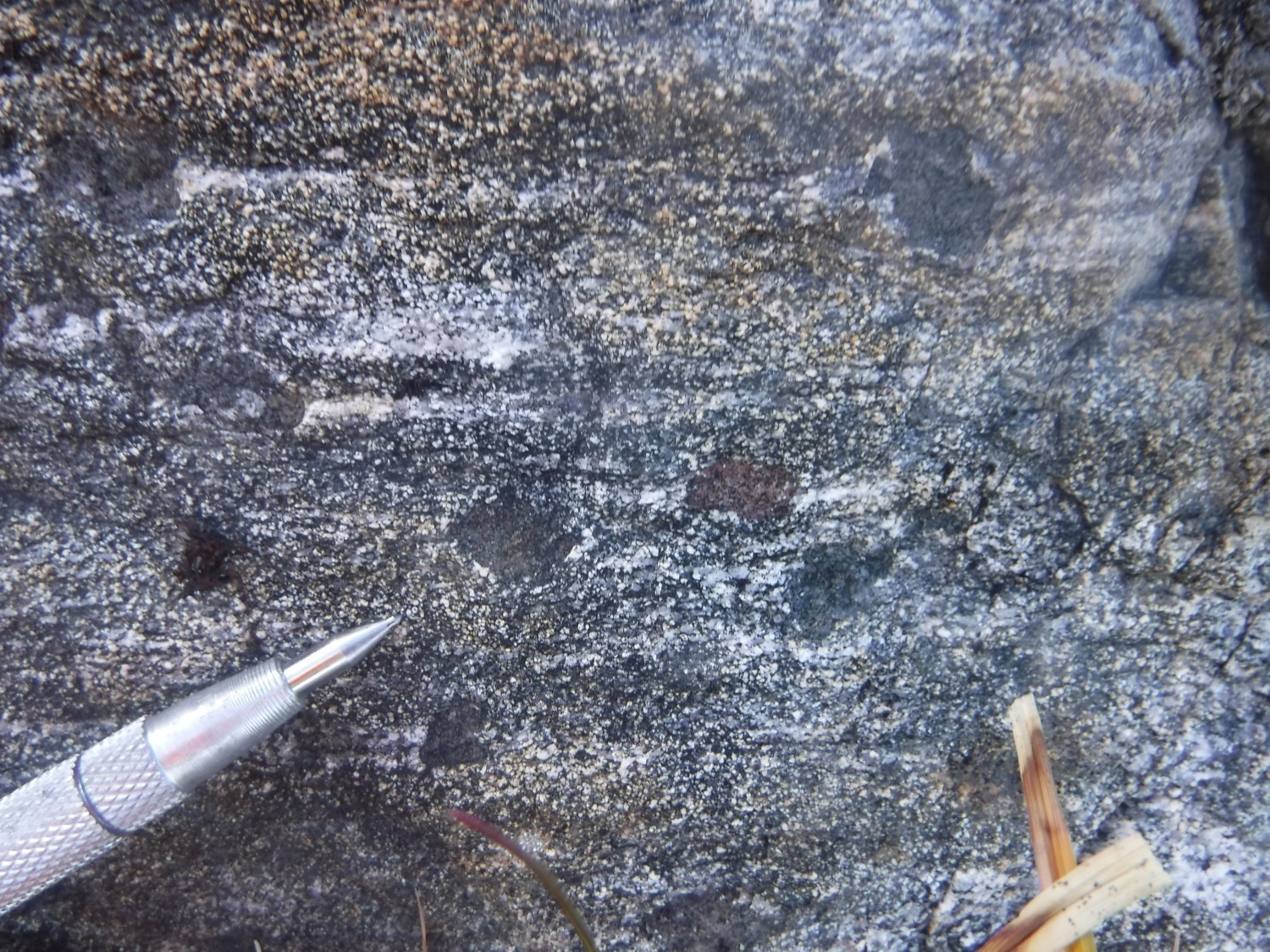 Unit pPfoc1 consists of dioritic to gabbroic banded rocks and, to a lesser extent, quartz diorite. The protoliths are undetermined, but appear to be of intrusive origin. The main minerals are hornblende and plagioclase. Some layers contain up to 5% post-kinematic garnet porphyroblasts (up to 1 cm in diameter) observed mainly in more mafic layers. Banding is defined by alternating centimetric to decimetric leucocratic and mesocratic bands, rarely melanocratic. These layers are marked by variation in hornblende and plagioclase contents. Leucocratic bands generally form injections parallel to foliation or mylonitic banding. Some veins are later and obliquely cut the planar fabrics.

Minerals are generally recrystallized. Locally, a granoblastic texture with equigranular minerals is observed. There is a local gneissic texture characterized by straight bands, mineral segregation with sharp or progressive compositional contacts. Partial melting seems to be locally reached, as white feldspathic material with some quartz has been observed, either in fine discontinuous bands around garnet porphyroblasts or between amphibolite boudins. Layers affected by migmatization are heteroganular, plagioclase being generally coarser than ferromagnesian minerals. No phase of unit pPfoc1 is magnetic. 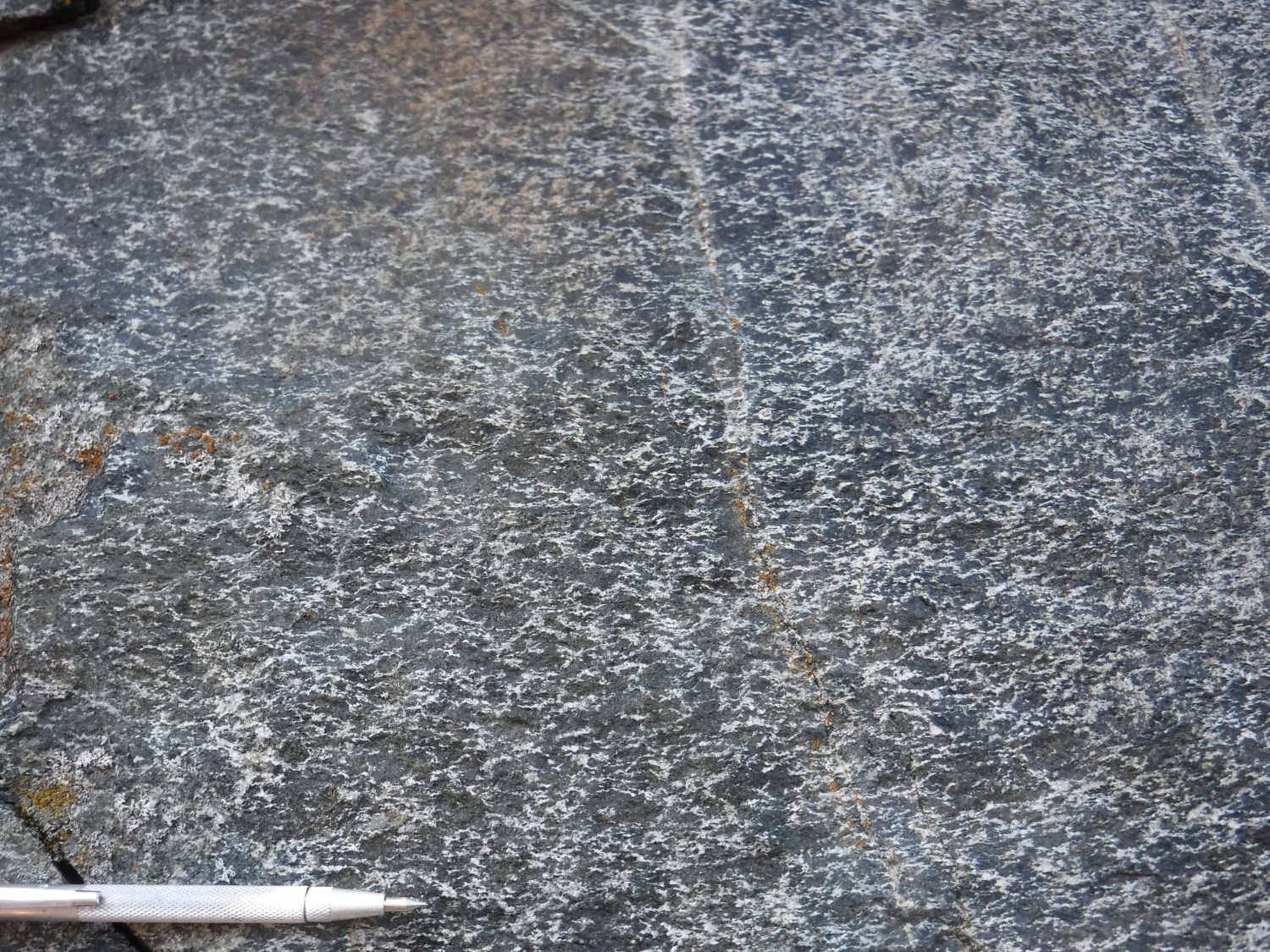 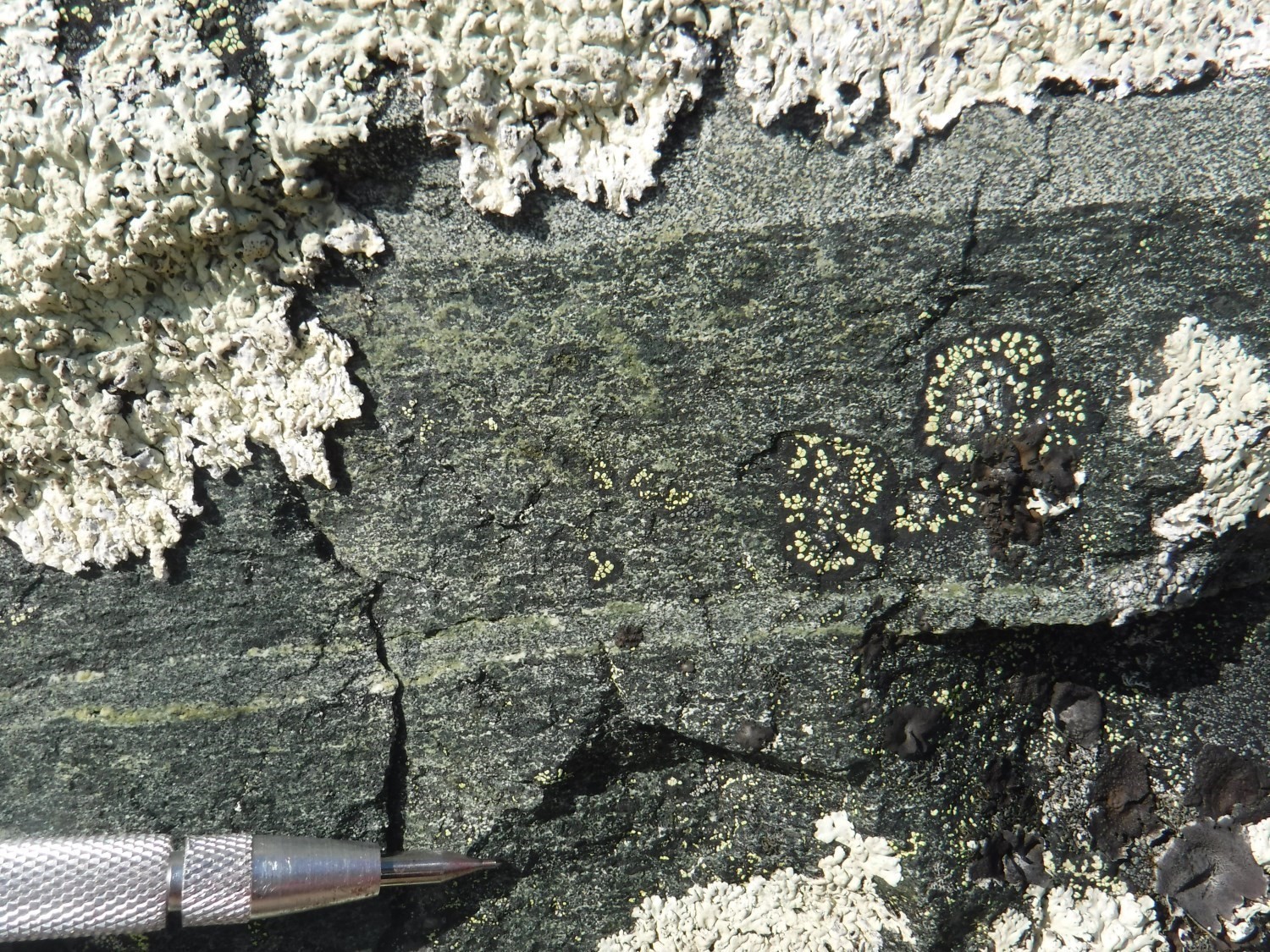 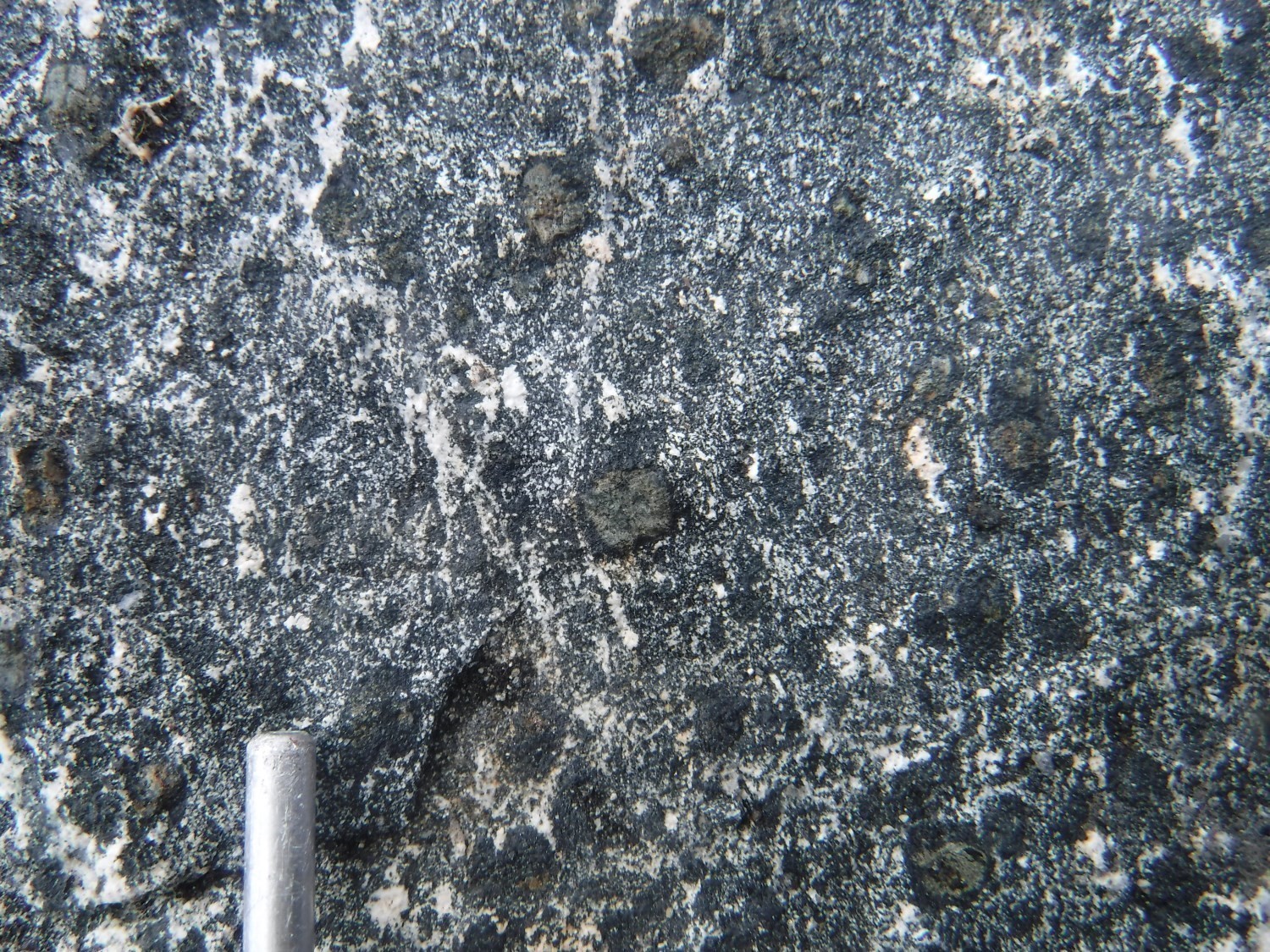 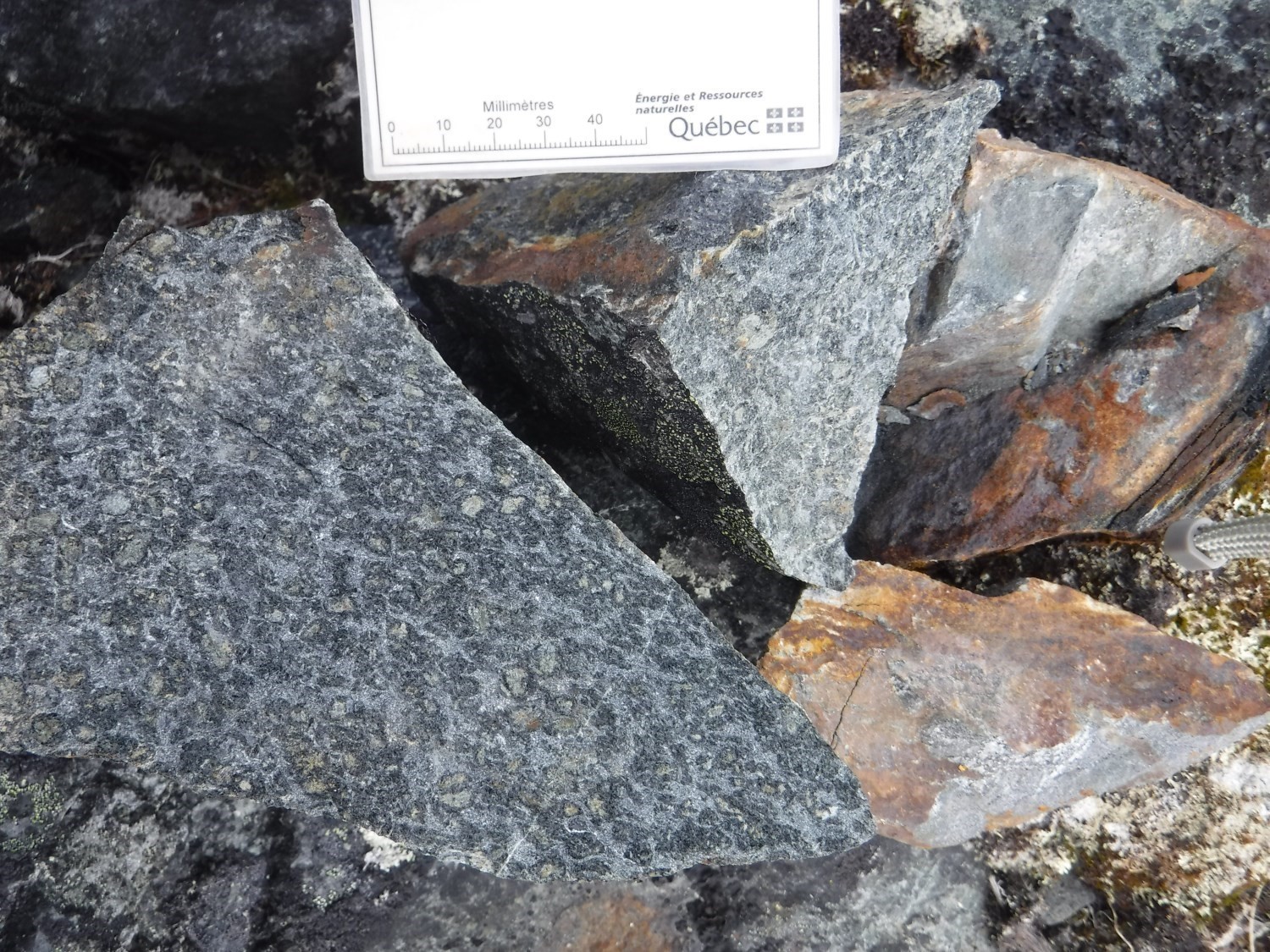 This unit consists of a metagabbro containing up to 30% hornblende phenocrystals. The rock is generally homogeneous, mesocratic and massive to foliated. It is greenish in altered patina and greenish grey in fresh exposure. Hornblende occurs as subhedral to euhedral crystals (2-5 mm) isolated in a matrix of plagioclase and fine hornblende which is generally recrystallized. Coronitic hornblende is observed on several outcrops as a replacement for clinopyroxene, some of the cores of which are locally preserved. Garnet porphyroblasts having a heterogeneous distribution are locally present. The rock locally has a leopard texture characterized by centimetric euhedral hornblende crystals lined by fine plagioclase. If the rock is deformed, plagioclase forms small elongated clusters (flames) defining foliation. In this context, hornblende phenocrystals are slightly to highly flattened and are recrystallized into crystal clusters.

A melanocratic phase is present in a lesser amount, as well as a few outcrops of ultramafic rocks of undetermined relationship, but of similar geochemical affinity. Unit pPfoc2 is cut by seams of homogeneous and granoblastic microgabbro having a pepper-and-salt appearance. These seams are centimetric to decimetric and parallel to foliation. The protoliths are uncertain since the rock is generally recrystallized. Unit pPfoc2 is generally non-magnetic, only the coarser phases are slightly magnetic.

Unit pPfoc2 shares similarities with unit pPpa10 of the Parent Group. However, the latter contains augite phenocrystals, while unit pPfoc2 contains hornblende phenocrystals. This difference could be explained by the variation in the degree of metamorphism in this area, from the greenschist facies in the Parent Group to the amphibolite facies in the Foucault Suite. Moreover, their respective geochemical signatures show similarities, particularly with unit pPap10b of the Parent Group. Indeed, both display negative anomalies in Nb, Ta, Zr, Hf and Ti, and are of tholeiitic to transitional affinity. According to this analysis, unit pPpa10 could be the protolith of unit pPfoc2.

The Foucault Suite is located in the NW part of sheet 35G11. It forms a NE-SW oriented strip which is >23 km long and ~4 km wide. Considering the average dip of the foliation, the Foucault Suite has a real thickness of a little more than 2 km. However, tectonic shortening and the presence of intrusions complicate this estimate. The thickness of each of the informal units is undetermined. The Foucault Suite occurs in the roof of the Ammaluttuq Fault and outcrops along its entire length. The NE part is dominated by unit pPfoc1 and the SW part by unit pPfoc2.