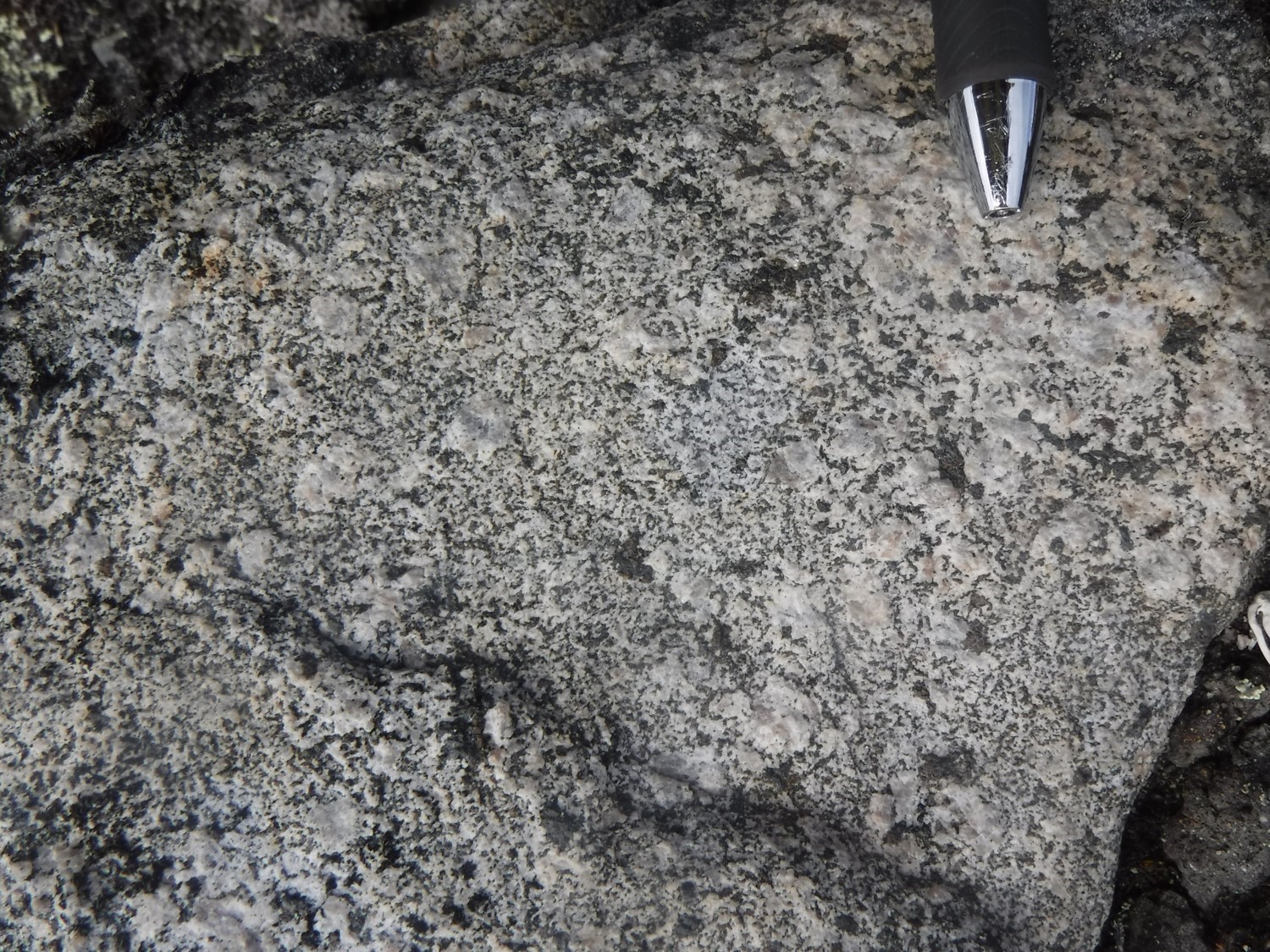 Machado et al. (1991) informally cite the gabbro of northern Perrault Lake as a reference for locating a geochronology sample (CP-5). The pluton, cutting units then assigned to the Watts Group, was assigned to the Cape Smith Suite by Lamothe (2007) during its lithostratigraphic synthesis of the Ungava Orogen. Beaudette et al. (2020) introduced the Vanasse Suite nomenclature based on the Vanasse lake to individualize the vast area composed of gabbro and gabbronorite of tholeiitic to transitional geochemical affinity in the NW part of the Parent Lake area (sheet 35G11). 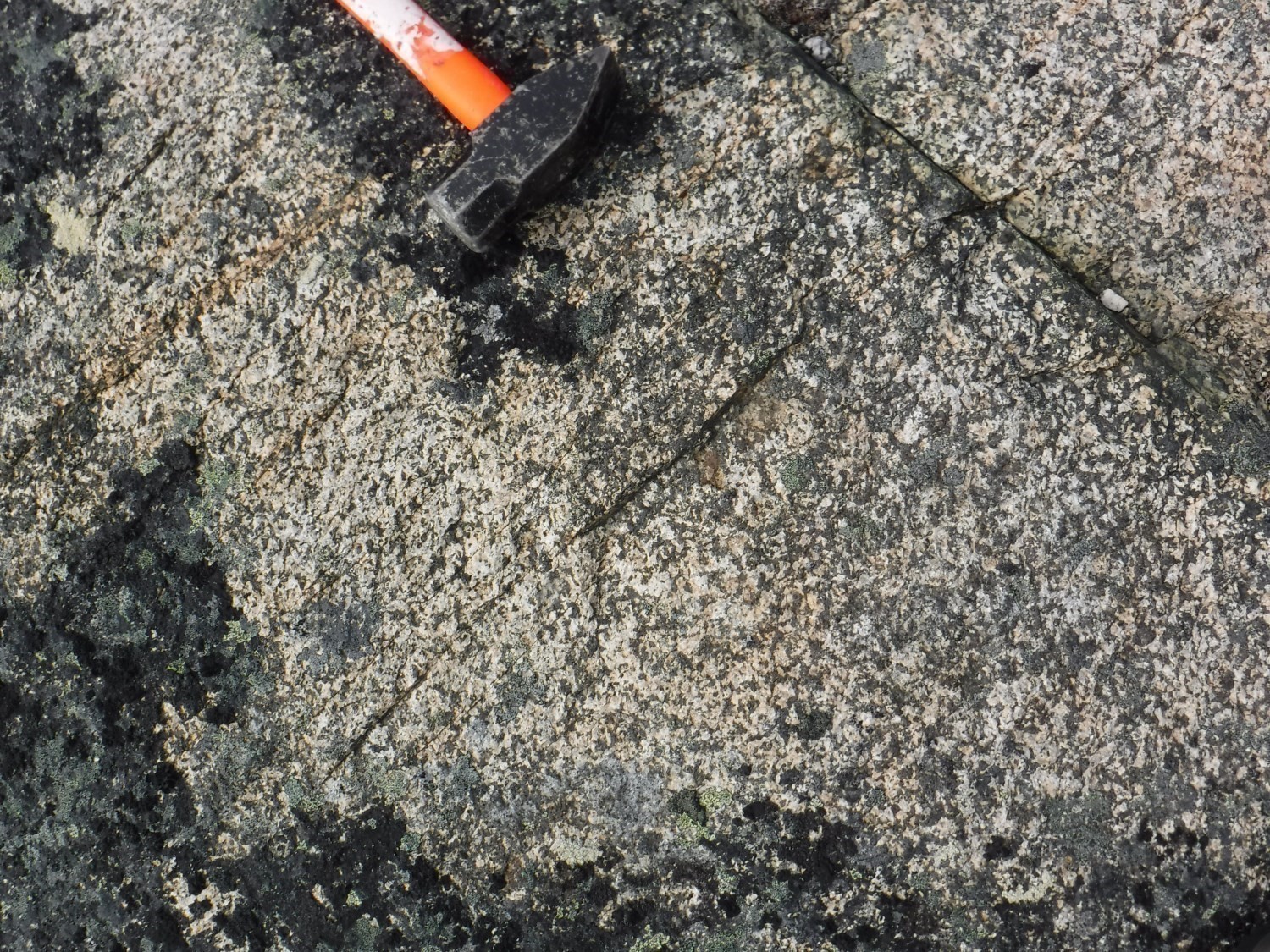 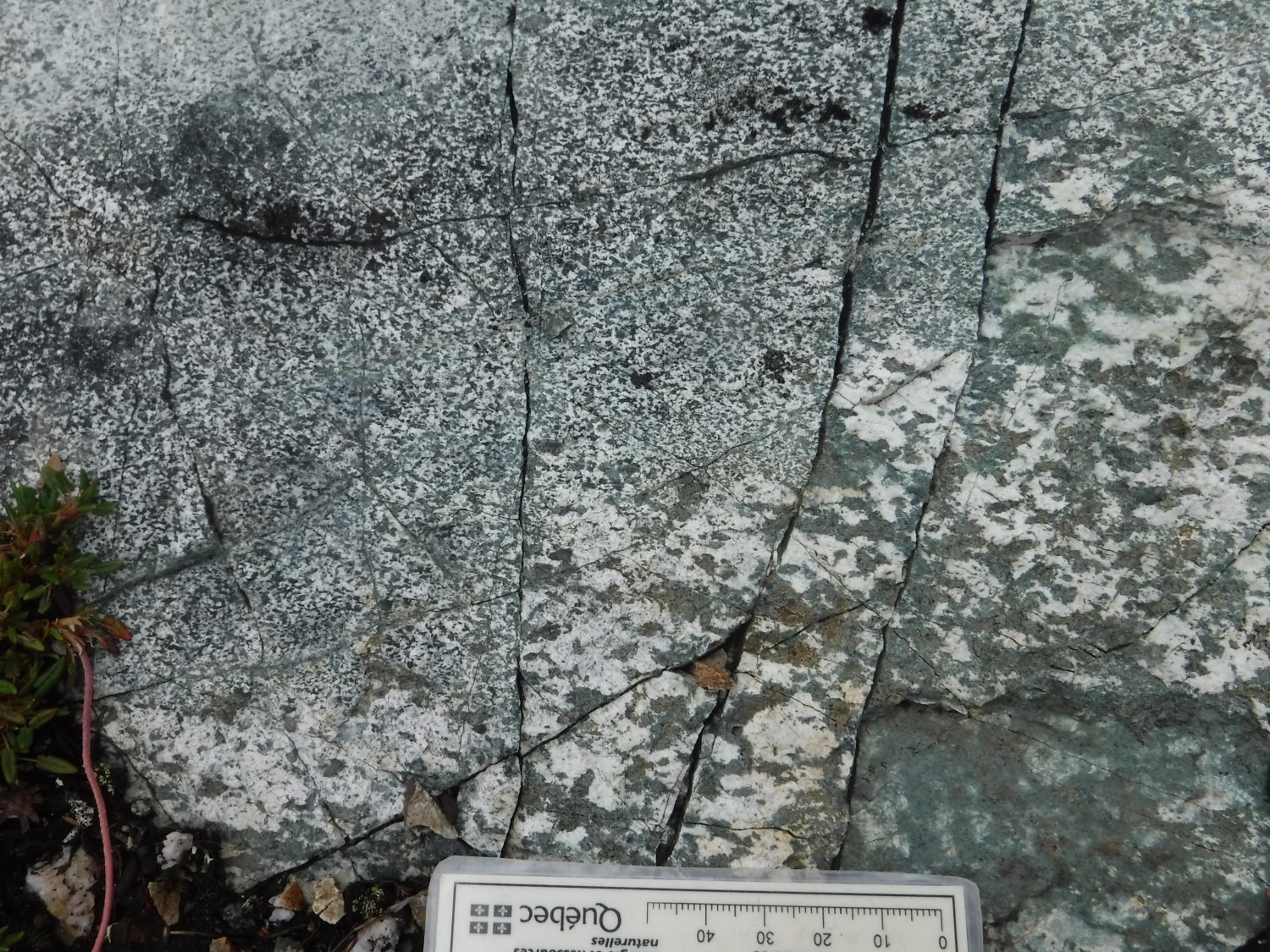 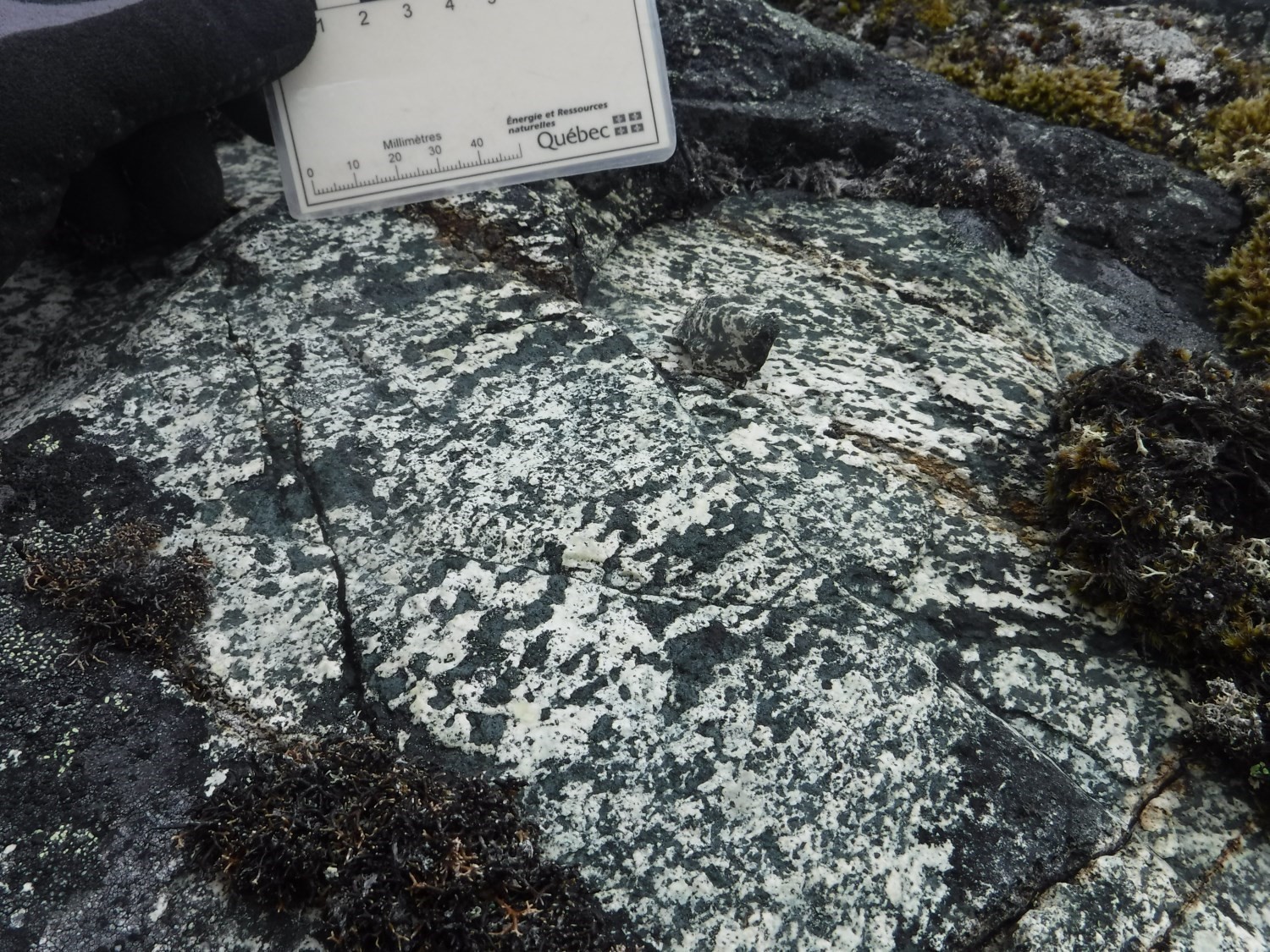 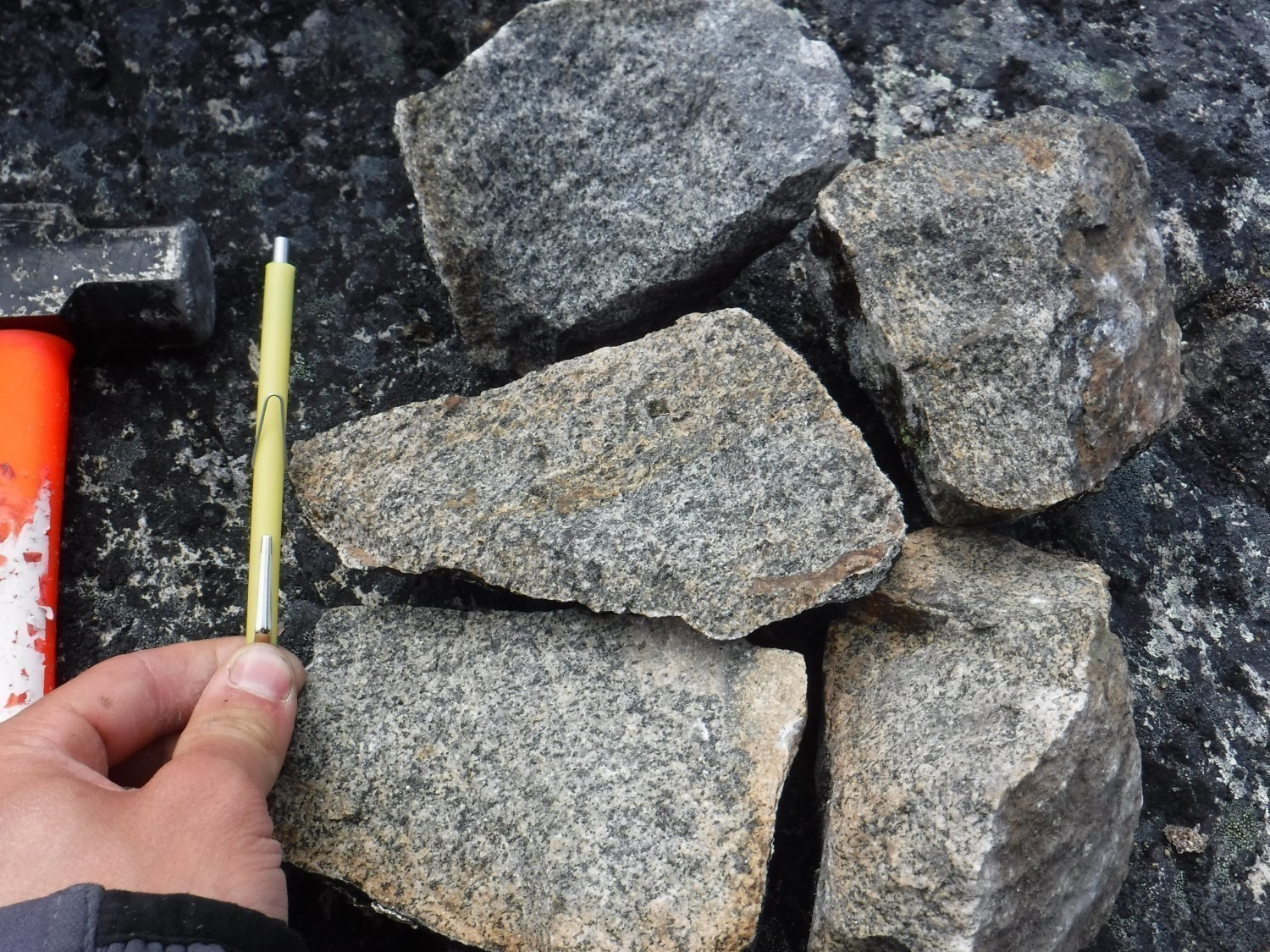 The Vanasse Suite consists of leucocratic to mesocratic gabbro and gabbronorite. Rocks are generally homogeneous, medium grained and massive to foliated depending on the location. Coarser-grained zones are observed in sharp or diffuse contacts. Their composition is similar to the main medium-grained phases. The two main minerals give the rock a two-tone alteration patina: beige coming from plagioclase and dark greenish brown associated with ferromagnesian minerals. Their colour in fresh exposure varies from greenish beige to pinkish brown.

Plagioclase and hornblende are the main minerals, regardless of the phase. For the richest lithologies, 10-45% losse hornblende crystals are observed in a plagioclase matrix. Hornblende also occurs in cluster networks of small, homogeneously distributed crystals, giving the rock a speckled texture. The second most important phase consists of 5-20% plagioclase phenocrystals (1-2 cm), floating or in clusters. Secondary minerals are clinopyroxene, orthopyroxene, biotite, opaque minerals and, locally, quartz. Clinopyroxene is recognized in the core of some hornblende crystals, indicating partial to complete replacement of clinopyroxene. Hornblende rims are in places accompanied by biotite and opaque minerals. Orthopyroxene does not exceed 5% of the rock and also has a coronitic texture marked by hornblende and opaque minerals. Quartz represents <5% of the lithology and occurs in the interstices of phenocrystals in some leucocratic samples. 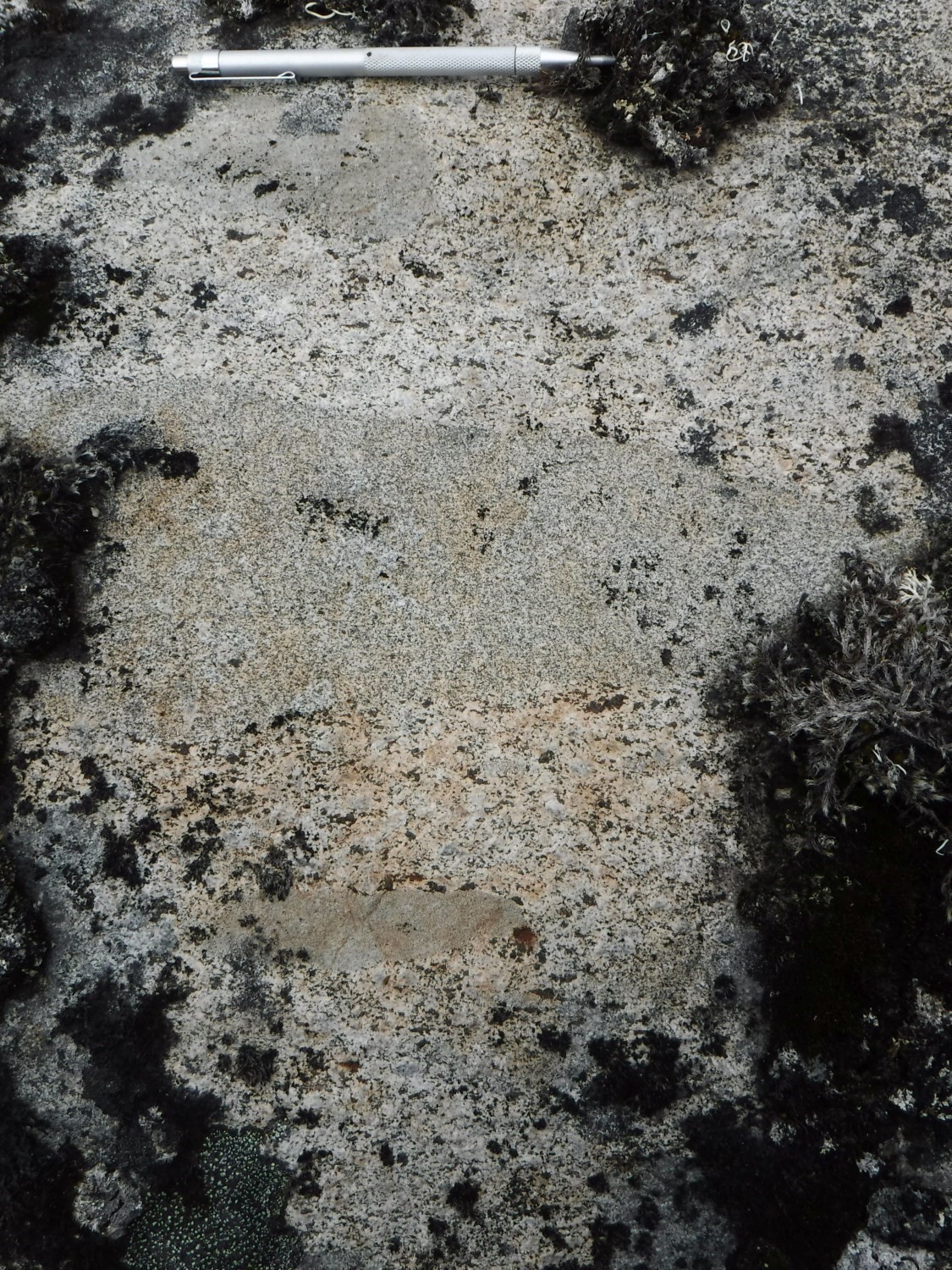 Fine to medium-grained mesogabbro enclaves are only observed very locally and are not recrystallized. Their composition seems similar to that of the host gabbro. The Vanasse Suite is generally little deformed, a slight foliation being marked by the alignment of ferromagnesian mineral clusters.

The Vanasse Suite is composed of two intrusions, marked on the aeromagnetic map by strong positive anomalies. The main pluton, to the north, has a cartographic dimension of 17 km by 10 km, NW of the Parent Lake area (sheet 35G11). The long axis is parallel to the general orientation of the foliation. Mapping of adjacent sheets, especially to the north and west, will help to better constrain the extent of this pluton. The rooting thickness of the intrusion is unknown.

A concordant U-Pb age of 1858 ±2 Ma interpreted as the crystallization age was obtained on a population of 33 zircon prisms from a gabbro sample taken in sheet 35G12. Two discordant Pb-Pb ages at 1860 Ma and 1856 Ma were reported in the same sample for the same population (Machado et al., 1991). The sampling site was revisited in the summer of 2019 for validation (2019-GM-5052). The outcrop has all the petrographic characteristics of the Vanasse Suite described in the Parent Lake area (sheet 35G11).